Plextor recently announced the release of the M5M mSATA SSD designed specifically for Ultrabooks. The drive offers an mSATA form factor with SATA 6.0Gbps interface, Marvell 88SS9187 controller and Toshiba 19nm Toggle NAND flash. The SSD, paired with custom Plextor firmware, drive performance numbers of up to 540MB/s and 430MB/s sequential read and write respectively and random read and write IOPS of up to 79,000 and 77,000.

Plextor recently announced the release of the M5M mSATA SSD designed specifically for Ultrabooks. The drive offers an mSATA form factor with SATA 6.0Gbps interface, Marvell 88SS9187 controller and Toshiba 19nm Toggle NAND flash. The SSD, paired with custom Plextor firmware, drive performance numbers of up to 540MB/s and 430MB/s sequential read and write respectively and random read and write IOPS of up to 79,000 and 77,000.

A hot topic at this year’s CES was around the new DEVSLP standard being implemented for the release of Intel’s Haswell based Ultrabooks later the year. The challenge with all mobile devices is how to get the best user experience while using the least amount of power consumption. DEVSLP is a SATA standard which helps address the need to consume less power and provide extended battery life to today’s mobile devices, while providing rapid wake times. The M5M mSATA supports DEVSLP, which can reduce power consumption to 1mW and resume from DEVSLP mode in 100ms. The fact that Plextor was able to meet this standard with a SSD design that relies on a power hogging DRAM cache is impressive. Other vendors without a DRAM cache have a tremendous design advantage when it comes to meeting the DEVSLP spec. 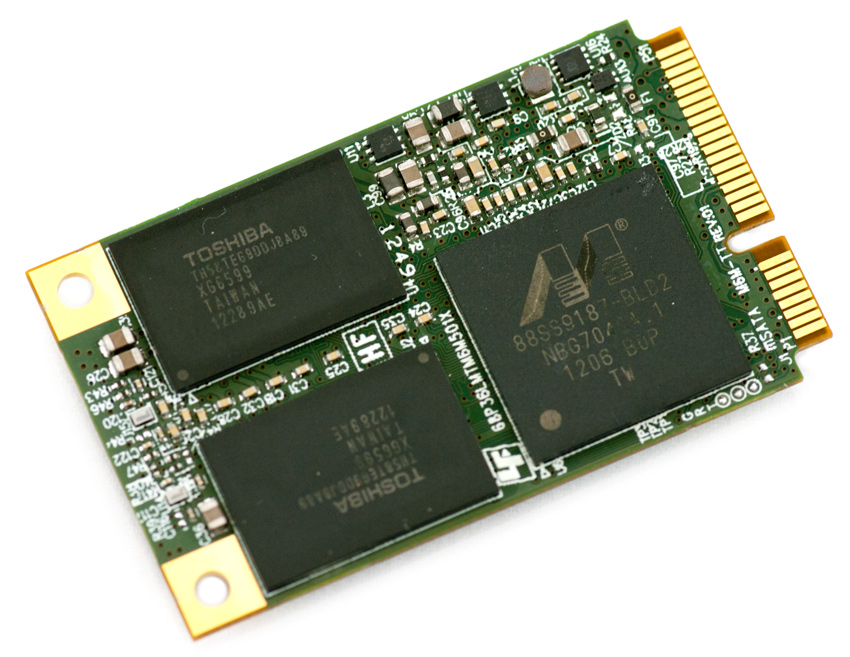 The Plextor M5M has a standard mSATA form-factor, with a SATA 6Gb/s interface. The components are exposed by design, so it takes the fun away from disassembling the drive to see what makes it tick on the inside. The top includes a Marvell 88SS9187-BLD2 controller and two Toshiba TH58TE690DJBA89 64GB 19nm MLC Toggle NAND. We expect to see the Marvell 88SS9187 controller to start appearing on newer 2.5-inch SSDs powered by Marvell controllers. 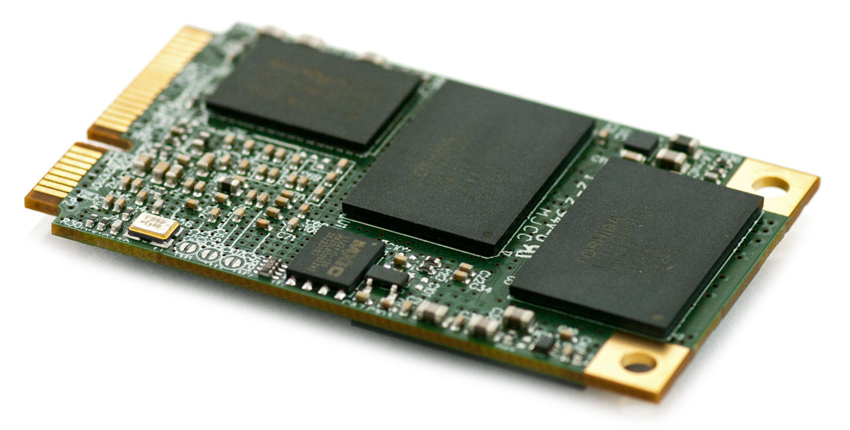 All consumer SSD benchmarks are conducted with the StorageReview Consumer Testing Platform, with a mSATA interposer card. The comparable’s used for this review include:

Our first test measures peak straight-line performance through a large-block sequential transfer. Plextor lists a peak read speed of 540MB/s and a write speed of 430MB/s.

In a sequential transfer test, we measured an average speed of 507MB/s read and 414MB/s write. The speeds came in slightly lower than the spec, but with write performance twice as fast as the nearest drive, we won’t complain too much.

The M5M mSATA offered the strongest low queue-depth performance out of the group in read performance, measuring 7,700 IOPS read. It takes a backseat to the Micron and OCZ drives with its 15,187 IOPS write performance.

In our next test, we shift to a smaller 4k random workload, with 100% read activity that scales from 1QD to 64QD. In this setting, the Plextor M5M mSATA starts off at the head of the pack and scales to just under 80,000 IOPS. 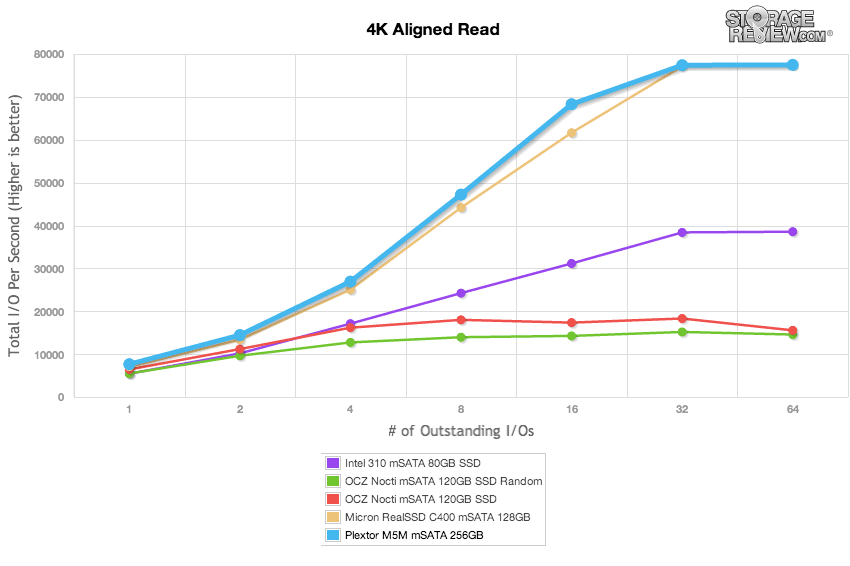 In our next test looking at 100% 4K random write performance, the Plextor M5M mSATA starts in the middle of the pack but takes the lead at queue depth 4 and peaking at just over 75,000 IOPS. 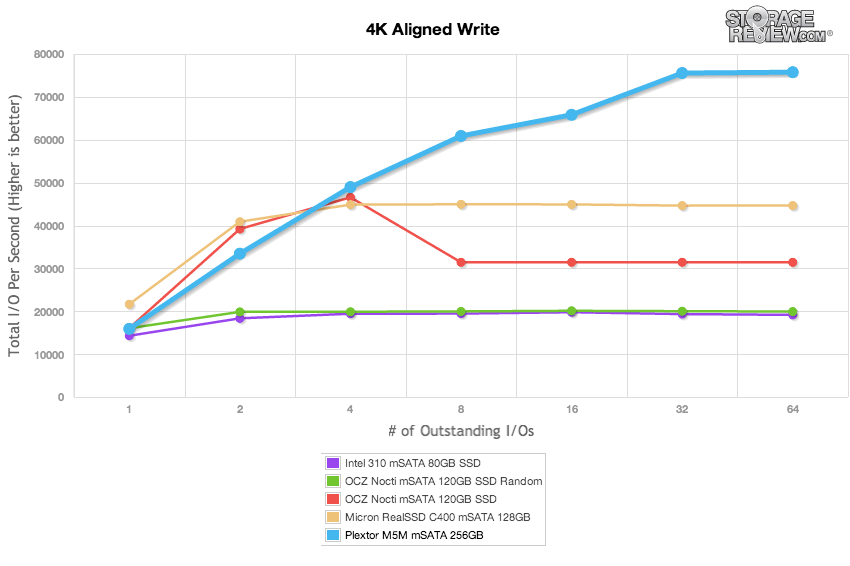 In our 4K write latency test, which measures access times at a queue depth of 1, the M5M mSATA performed below the Micron and OCZ mSATA drives with 0.0541ms. Peak latency was excellent, measuring 7.47ms, just off the mark of the Micron’s leading peak latency of 1.45ms. 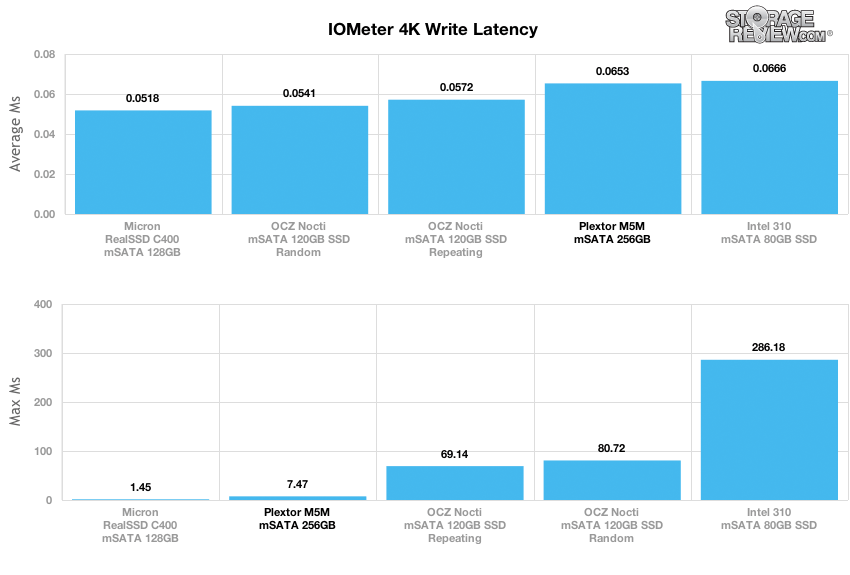 Our last group of consumer IOMeter synthetic benchmarks looks at mixed-load server profiles including Database, Workstation, File Server, and Webserver. In all areas except the read-only Webserver profile, the M5M mSATA outpaced the pack of the other mSATA SSDs at every queue depth. 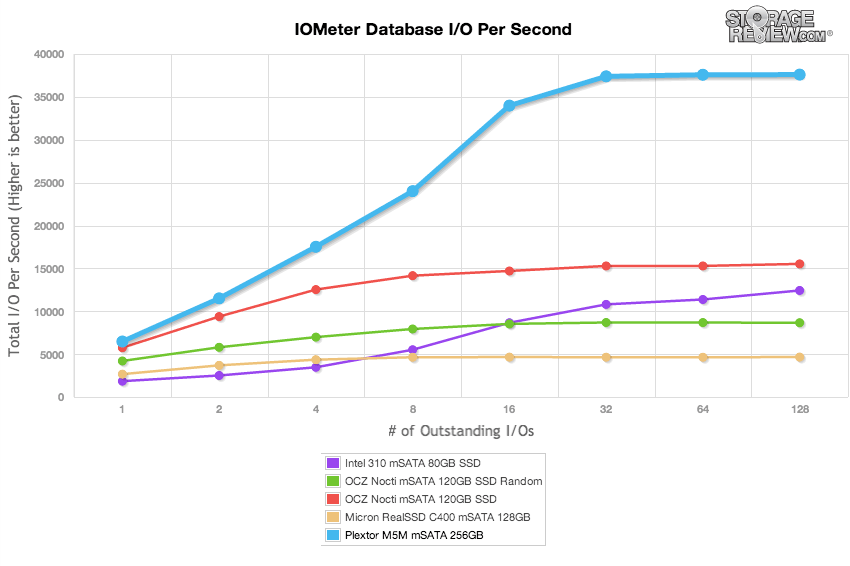 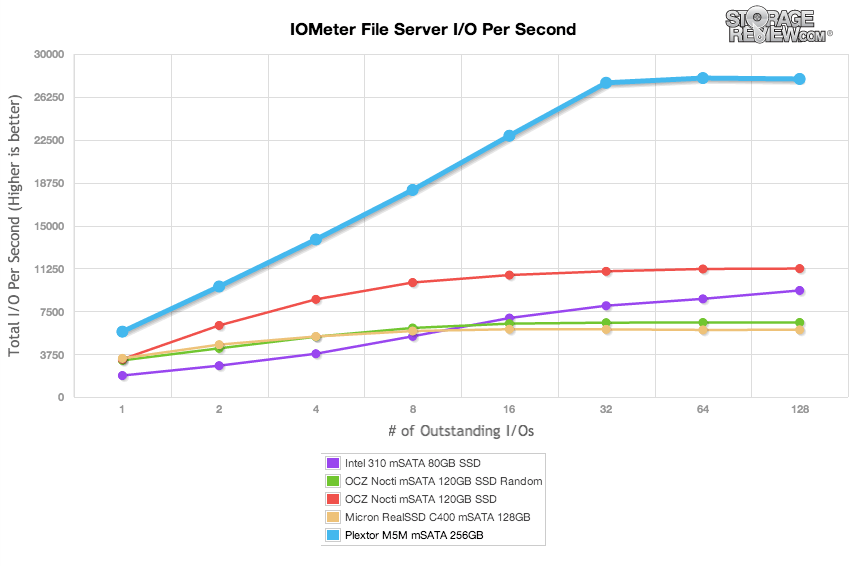 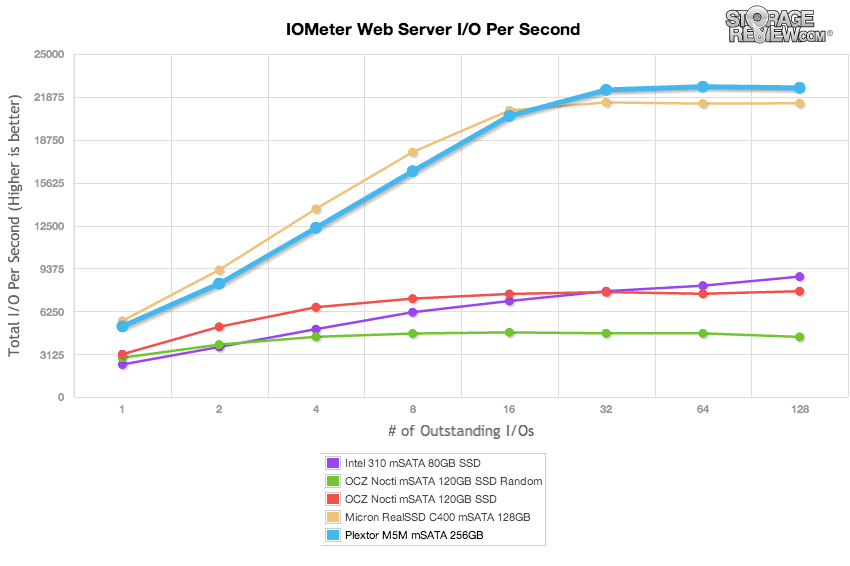 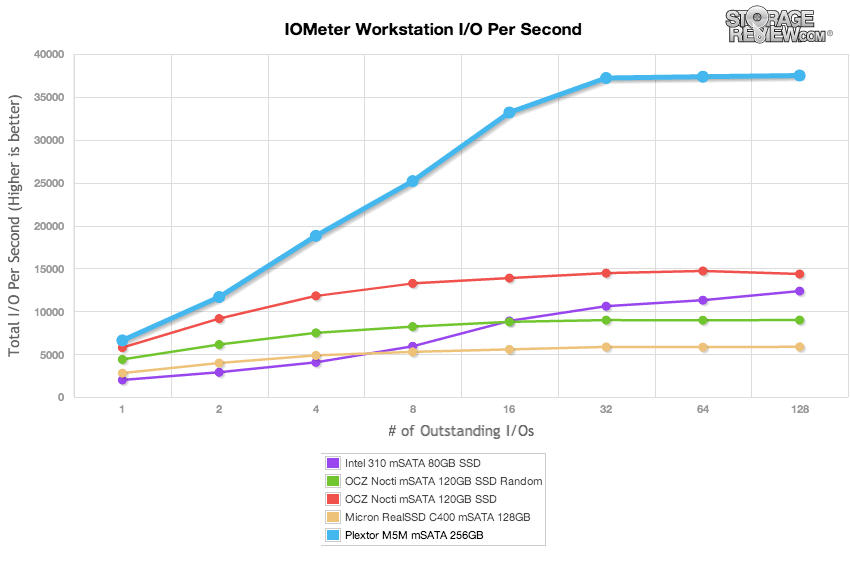 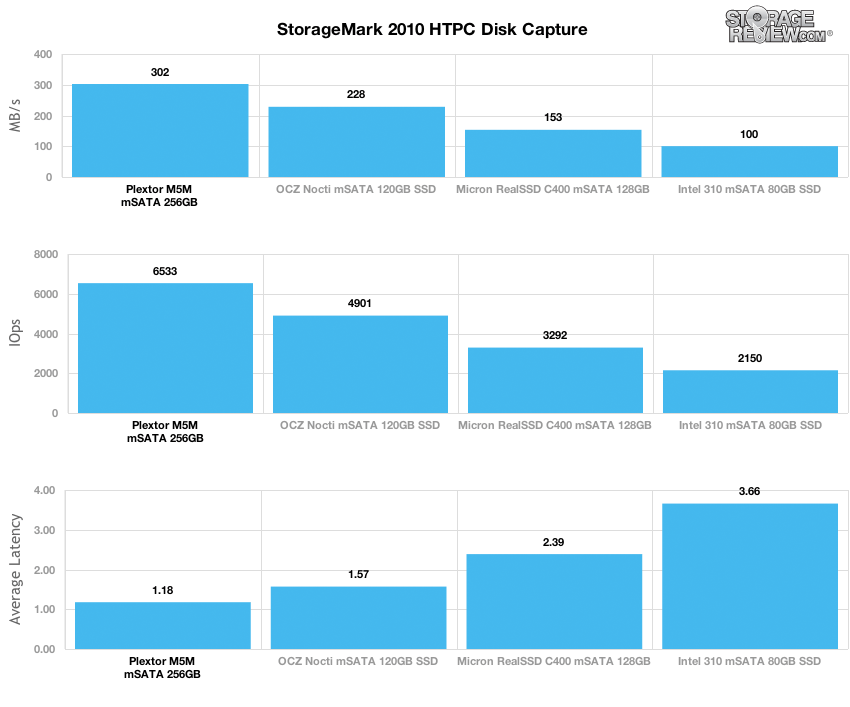 In our HTPC trace the M5M mSATA measured 302MB/s average, 6,553 IOPS and 1.18ms average latency, which leads the other group of mSATA drives. 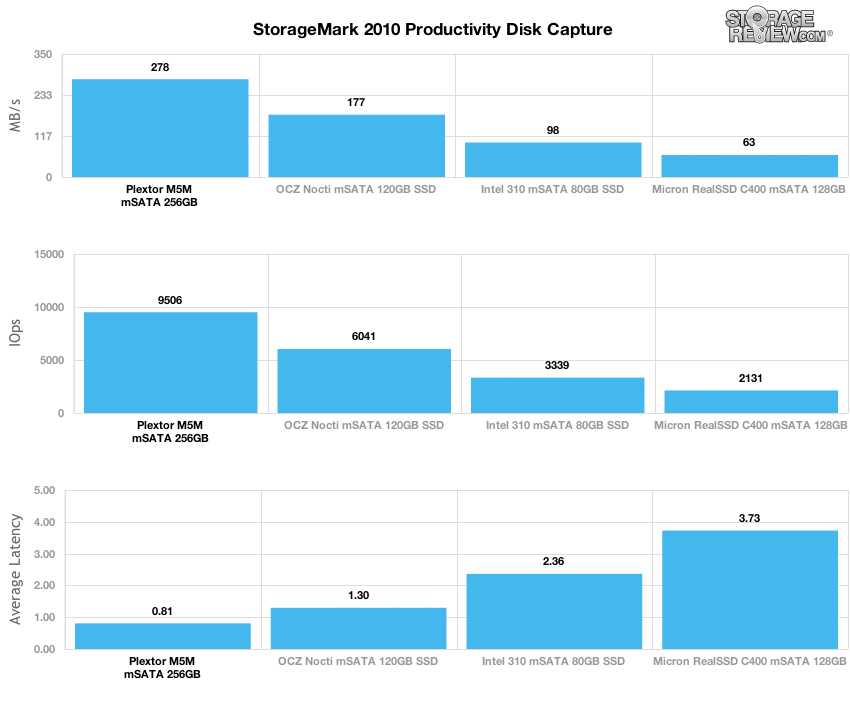 In our Productivity trace, we measured an average speed of 278MB/s, 9,506 IOPS and 0.81ms average latency, which leads the other group of mSATA drives. 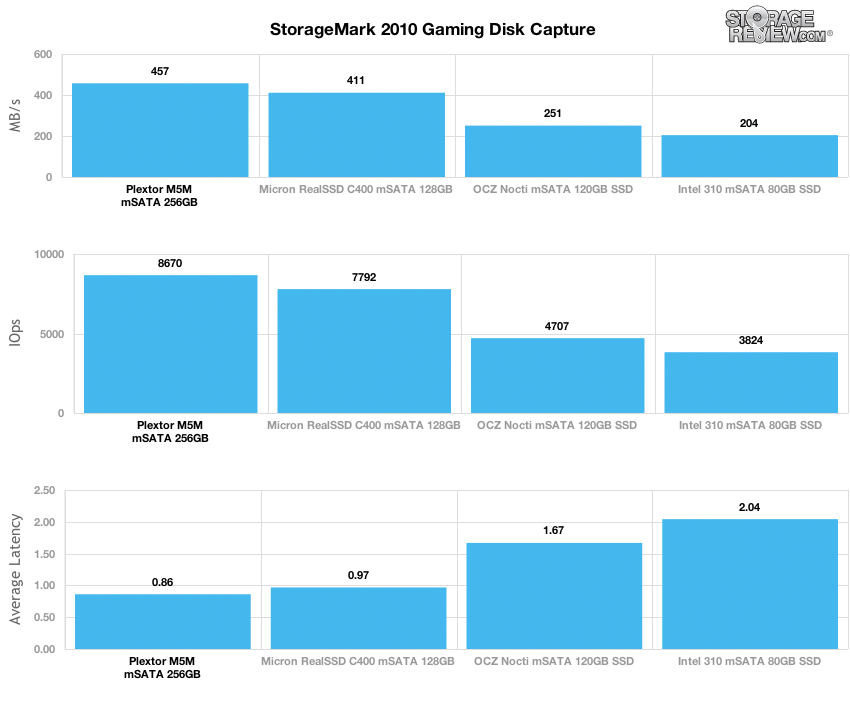 In our read-intensive Gaming trace, the M5M mSATA was able again lead the pack of other mSATAs with performance numbers of 457MB/s, 8,670 IOPS and 0.86ms average latency.

At Idle, we are seeing the benefits of Intel’s new reference specification for DEVSLP, which provides the lowest level of idle power at 0.64 watts. During usage, we are seeing the effects of the DRAM cache, which requires additional power. We measured average write activity of 4.85 watts, sequential read using 3.64 watts, random read needing 2.09 watts, and startup consuming 3.37 watts.

The Plextor M5M mSATA SSD gives users a solid performing option for ultrathin computers, tablets and even standard notebooks. With Intel’s push for DEVSLP standard implementation with the release of Haswell based Ultrabooks in 2013, the M5M mSATA has already complied with these requirements to meet both current and future needs in regard to the quest for more performance with less power consumption. With the Ultrabook and tablet market continuing to expand, the M5M mSATA also offers a great caching option, while the higher capacity models are can perform right up there with 2.5″ SSDs as primary storage.

With the M5M, we saw the fastest performance numbers to date out of an mSATA SSD in our real-world traces. The numbers coming from the M5M mSATA put the drive in-line with performance numbers seen with the Corsair Neutron GTX 240GB and Plextor’s own PX-M5S SSD drives. In some tests, the M5M out performed the popular Samsung 840 Pro 512GB and OCZ Vector 256GB. Overall for users looking for another option in the mSATA SSD space, the Plextor M5M mSATA provides very fast speeds.

The Plextor M5M mSATA delivers by providing some of the fastest speeds to date in the mSATA category. With it meeting the new Intel DEVSLP standard, the drive proves a great option for users looking to upgrade their ultrathin computers now while meeting power standards for the next generation Ultrabook spec.