The Chia surge wiped out the retail supply chain for hard drives. Thankfully that has passed and prices have come back. On the SSD side though, the part often used for plotting Chia, there’s been increased interest in endurance specs. The creation of a Chia plot is extremely write intensive using the standard plotter, though creative types have even worked around this limitation. But for small plotters that just want to get going with the official tools, selecting a good SSD for Chia is important. Now we have dedicated drives coming to market for this purpose, the first to hit our lab is the PNY LX2030.

The Chia surge wiped out the retail supply chain for hard drives. Thankfully that has passed and prices have come back. On the SSD side though, the part often used for plotting Chia, there’s been increased interest in endurance specs. The creation of a Chia plot is extremely write intensive using the standard plotter, though creative types have even worked around this limitation. But for small plotters that just want to get going with the official tools, selecting a good SSD for Chia is important. Now we have dedicated drives coming to market for this purpose, the first to hit our lab is the PNY LX2030. 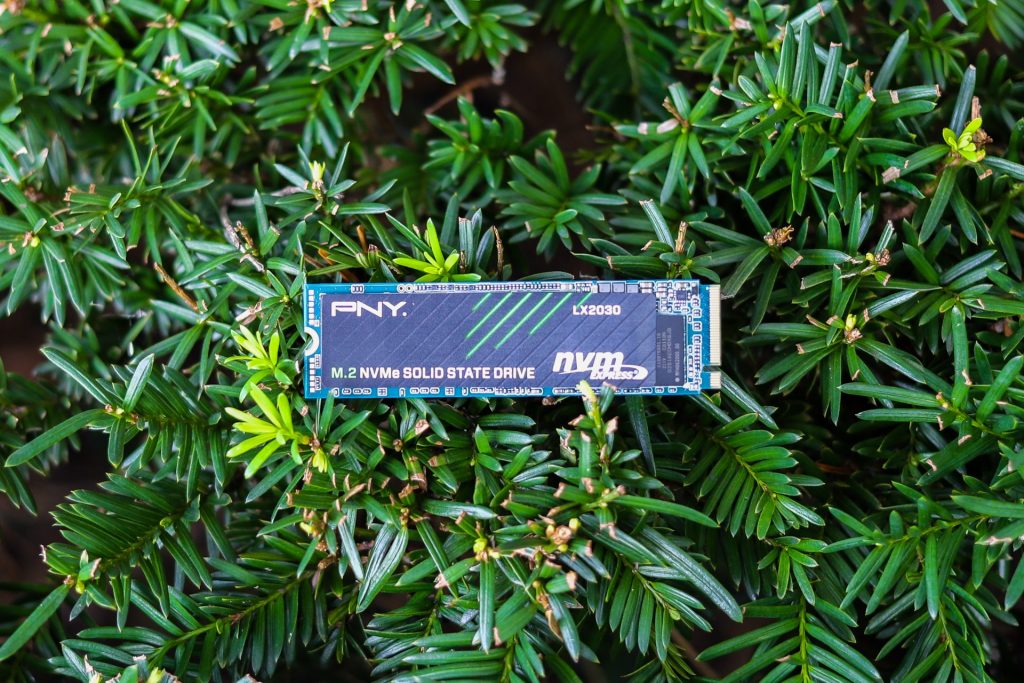 The 2TB LX2030 (NVMe Gen3, Phison PS5012-E12S controller) is just one of three drives in PNY’s Chia family. The others are 1TB and 2TB capacities in the LX3030. The biggest differences between the two drives come down to endurance and write performance. The drives both offer 3,200MB/s reads. The LX2030 tops out at 1,000MB/s write while the LX3030 can hit 2,400MB/s. The difference in endurance is quite dramatic as well. Keep in mind, these are workload-specific endurance figures, only for Chia plotting:

One other element to note is the warranty, which is important. The LX2030 carries a warranty of only one year, the 1TB LX3030 gets two years and the LX3030 comes with five years. So we have the takeaway that endurance, with enough performance, is all that matters for this job. And the fact that you shouldn’t expect this SSD to be around for a very long time, with the exception of the $1170 2TB LX3030. 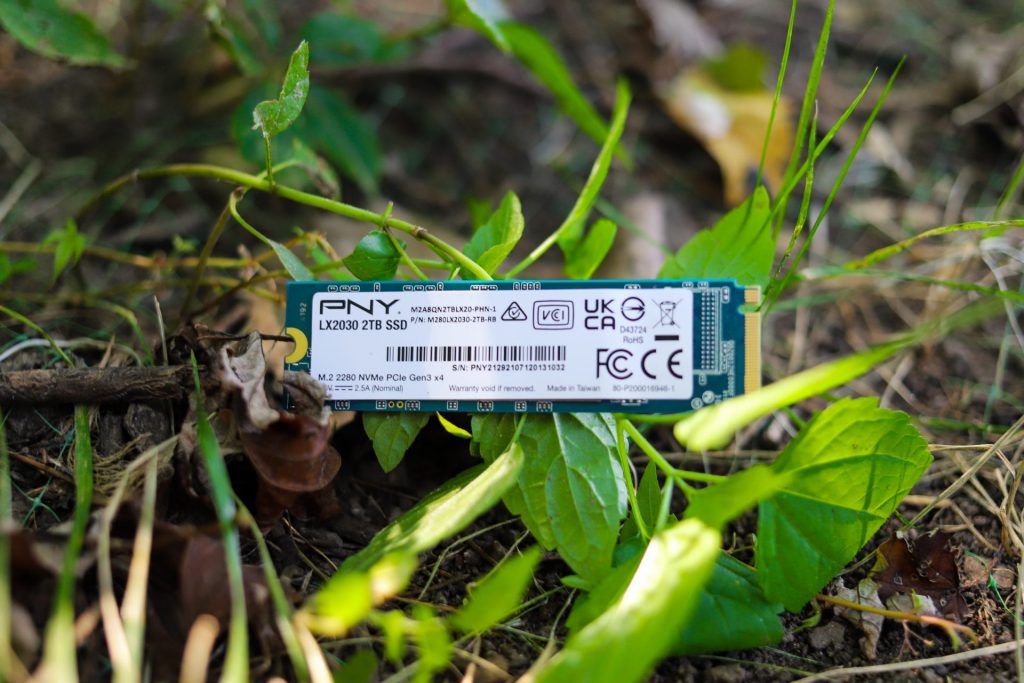 At a high level, this notion of extreme endurance isn’t wrong, but once you tear into the math a little, the premise gets shaky. This drive is only scoped to handle Chia plotting with its endurance rating. For any other workload, it drops to 3000 TBW. And at $500, it’s priced in enterprise SSD territory, many of which offer a higher endurance spec with a five-year warranty for the same price. That said, the PNY LX2030 is a standard M.2 form factor that fits in any modern PC, making it plug and play.

Ultimately though PNY will have had to engineer this drive to perform very well, despite the high endurance. Because if it’s slow, all the endurance in the world won’t make any difference. In fact, doing some bar napkin math, this drive needs to sustain about 300MB/s in writes to milk out that endurance spec in the course of a year. Seems a difficult task for a client drive like this.

Given the PNY LX2030 hits a very specific part of the market, comparables for this drive are few and far between. The closest really based on the cost and NVMe interface though is enterprise SSDs, which we picked one in a similar price, capacity, and endurance to compare with. We looked at the drive as we would with consumer SSDs with a 5% working partition size, as well as a 25% partition size as we test enterprise SSDs.

With all of these devices being Gen3 NVMe SSDs there wasn’t a huge spread in read performance between the PNY LX2030 and the Intel P4610 under the 64K sequential read test. With a 5% partition size, the LX2030 capped out at 2.35GB/s.

Moving onto 64K sequential write performance, we again see the huge difference between the over-provisioning levels on the PNY LX2030 and a true enterprise SSD. With a 25% partition size (500GB of data in use) the LX2030 slowed down to a peak of just 321MB/s under a more casual burst/sustained write workload. Dropping the partition size to 5% or 100GB that write speed increased to 779MB/s, but this is still a workload spanning minutes, not hours or days.

For our last test we look at the PNY LX2030 under a more extreme steady-state write speed test. These are common for enterprise SSDs under incredible stress, but it really lines up with how Chia plotting works. The drive is under a near-constant write workload at all times, with no breaks. Using the full 2TB drive surface, under a 6 hour steady-state workload the PNY LX2030 slowed down to a 122MB/s transfer rate. Even with an incredible amount of over-provisioning turning it into a 500GB volume, we measured a steady-state write speed of 683MB/s. Still far short of the 1GB/s spec sheet claim. 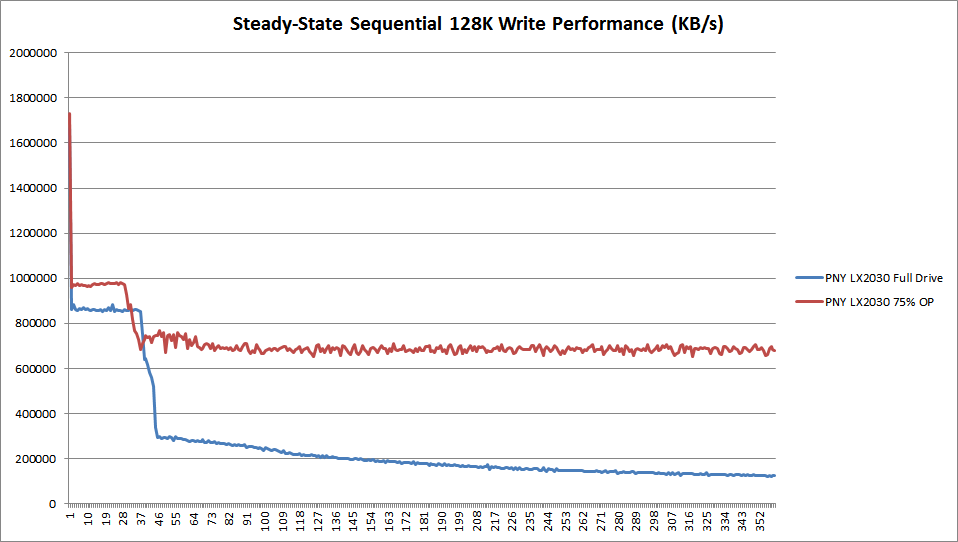 The PNY LX2030 is an interesting use case-specific SSD that tries to blend into a market well above its punching class. Chia plotting from day one has been quickly teaching users about flash endurance and sustained write performance, which has been a staple of the enterprise flash market for years now. It’s not hard to make a high-endurance drive, it just comes down to how much do you want to pay for it. The enterprise market in fact has uber-high endurance drives like Intel Optane, down to partial drive write QLC models, all where buyers can hone in on exactly what drive they need for a given workload. That is the crux of the problem that PNY put itself into though. 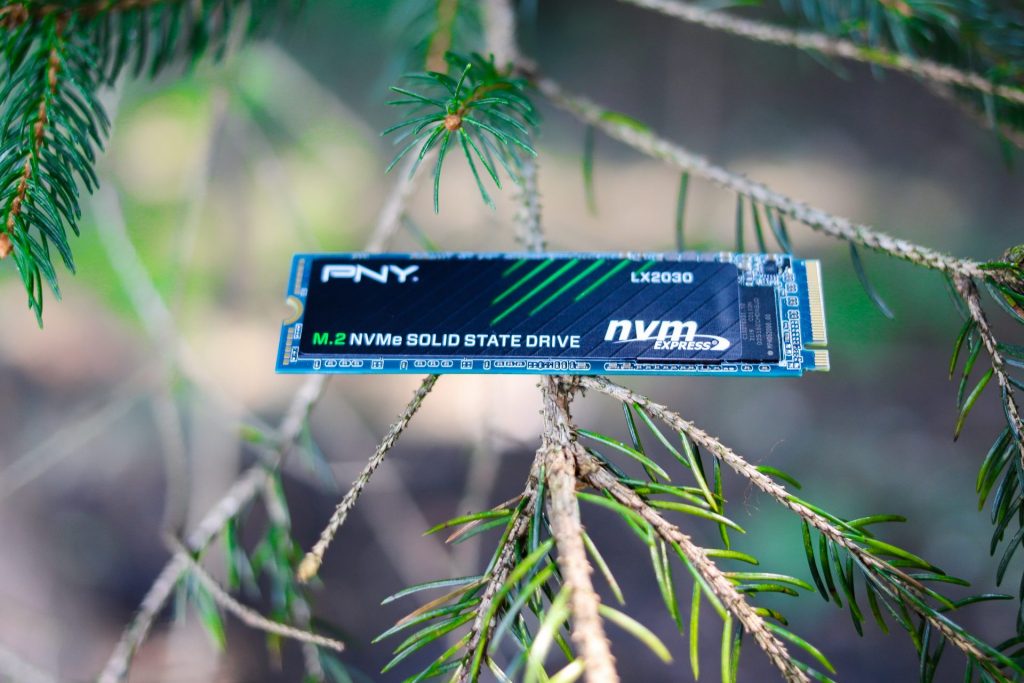 The 2TB PNY LX2030 slots firmly into a price point that already contains similar capacity mixed workload enterprise SSDs. We happened to have a 1.6TB Intel P4610, which offers a 5-year warranty and 12PBW of endurance to compare this against, but it also shows this isn’t really a fair fight.

The M.2 form factor has never been about high performance write workloads in the enterprise arena, having cooling and power limitations. For enterprise platforms, M.2 is usually limited to read and boot workloads. More intensive workloads are generally using the U.2 form factor. Yes a 15mm thick U.2 enterprise SSD won’t fit into an Intel NUC, but any desktop user with an open PCIe slot can get a cheap adapter and load it in that way. Many did this as Chia plotting took off in its early days, driving very fast plotting.

In the end, this drive came out too late, the advanced plotting landscape has shifted to be less reliant on flash. It’s too expensive, for $500 you can get a true enterprise SSD that’s much faster with higher endurance for use with the basic plotter. And the warranty is the shortest of any SSD in the industry. Oh, the performance is pretty bad too under load, with a paltry 122MB/s write speed after only six hours. With the $500 the LX2030 costs, I’d rather you buy 2.4 XCH and hope for the best.