The ULINK DA Drive Analyzer is an application available to QNAP users that allows an accurate prediction of the drives installed on the system through the power of AI. What makes this application different from other S.M.A.R.T. monitors that are on the market is that ULINK uses machine learning to leverage data from over a million drives to assist in preventing a drive from failing unexpectedly. The current licensing on the DA Drive Analyzer is $5.00/ per drive for an annual plan, but there is also a 3-month plan for $1.50/per drive.

The ULINK DA Drive Analyzer is an application available to QNAP users that allows an accurate prediction of the drives installed on the system through the power of AI. What makes this application different from other S.M.A.R.T. monitors that are on the market is that ULINK uses machine learning to leverage data from over a million drives to assist in preventing a drive from failing unexpectedly. The current licensing on the DA Drive Analyzer is $5.00/ per drive for an annual plan, but there is also a 3-month plan for $1.50/per drive. 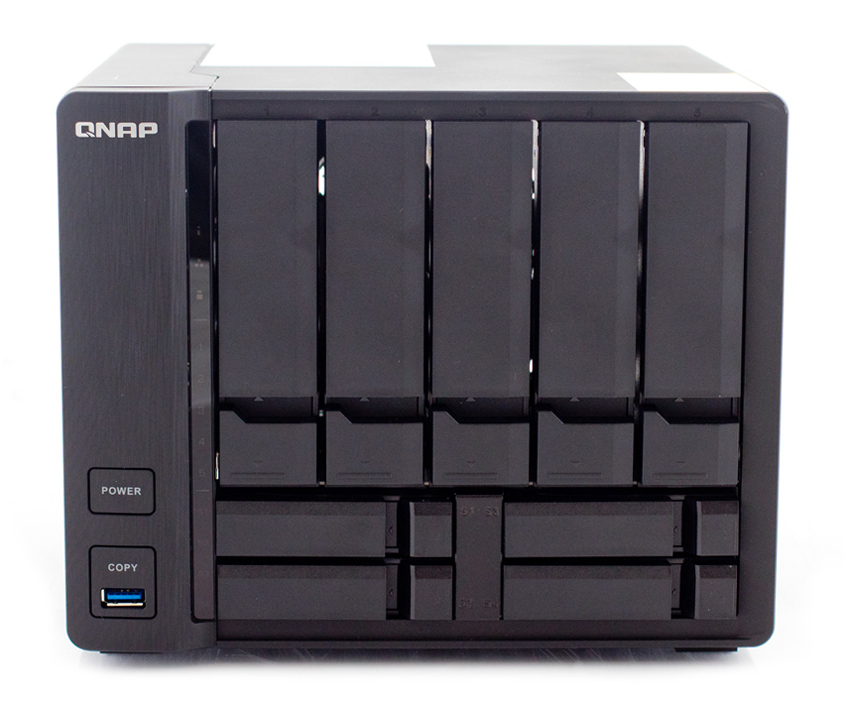 QNAP DA Drive Analyzer – What is it?

The DA Drive Analyzer is an AI-powered cloud engine from ULINK, a company leader in IT storage interfaces. The DA Drive Analyzer uses historical data from millions of other drives in order to predict if one or more of your drives is near failure and alert before it becomes a problem. The DA Drive Analyzer offers users a ton of features about the system and current diagnoses of each drive individually, allowing for a surprise failure to be a thing of the past. 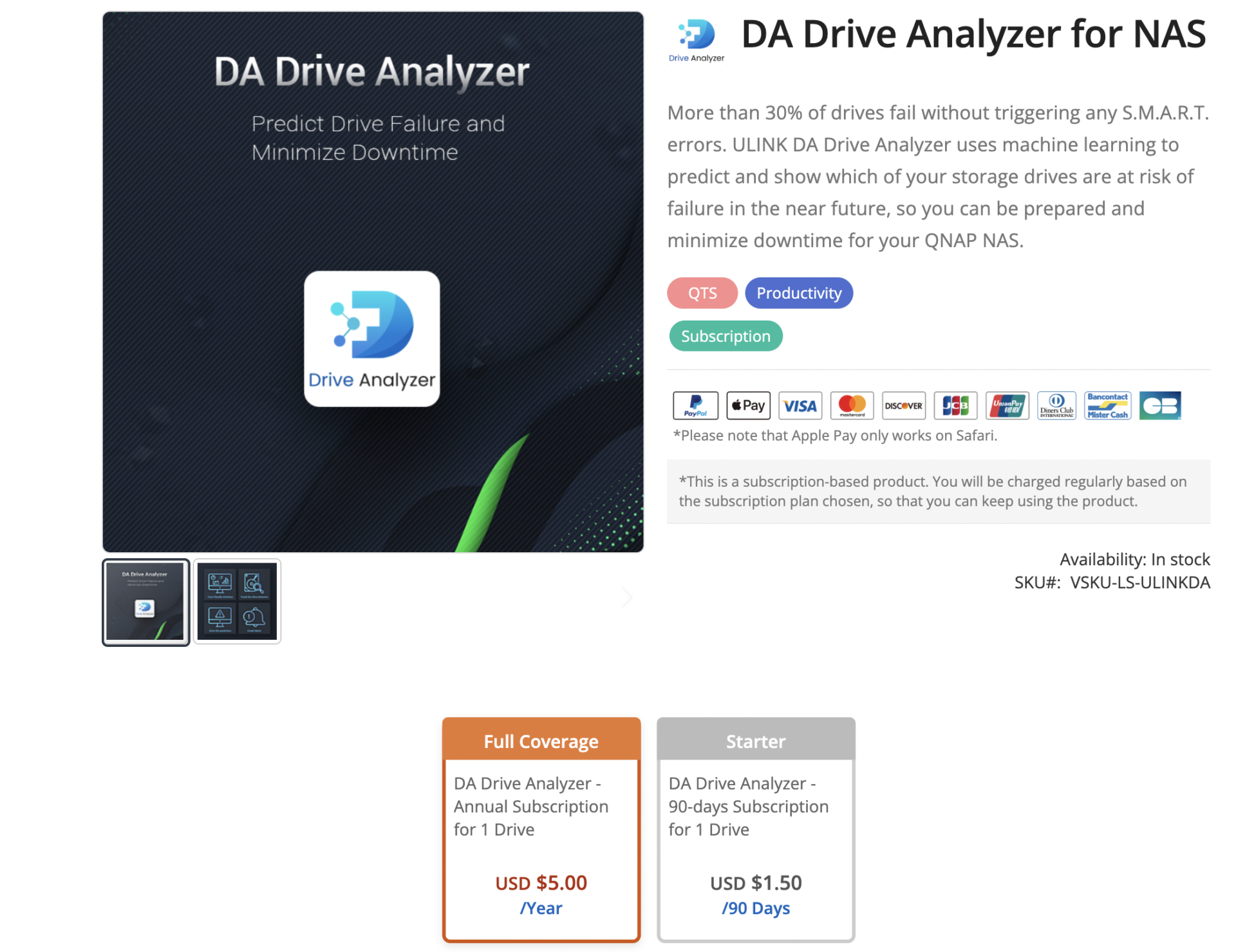 One of the biggest reasons to use the DA Drive Analyzer software is the preventative maintenance that admins and users are able to do. When a system experiences a drive failure, there is always the possibility of data loss which results in a system downtime period that can disrupt workflow and productivity. With DA Drive Analyzer, users and admins receive detailed information on each drive from AI predictions and can plan when the best time to replace the drive(s) will be.

In order to use the DA Drive Analyzer, it is necessary to make sure that the QNAP system that is going to be used is supported by the Drive Analyzer. QNAP states that in order to use it on NAS devices, it must be using QTS 5.0/QuTS hero h5.0 or later. All QNAP expansion units (except the TR series) are also supported, and to note, it does require Internet access. As for the drives that are supported, SAS and NVMe drives aren’t currently, and some SATA drives may not have the correct firmware and be listed as “Unsupported.” There is a full list published by ULINK for supported HDDs and SSDs.

Looking at the application, the first thing that users and admins will see is the app Overview. Starting at the top of the Overview tab, it has 4 different status signs for the drives, faulty, critical, warning, and normal. Each current status sign will show the number of drives that are currently listed as that status and a brief description of the status. 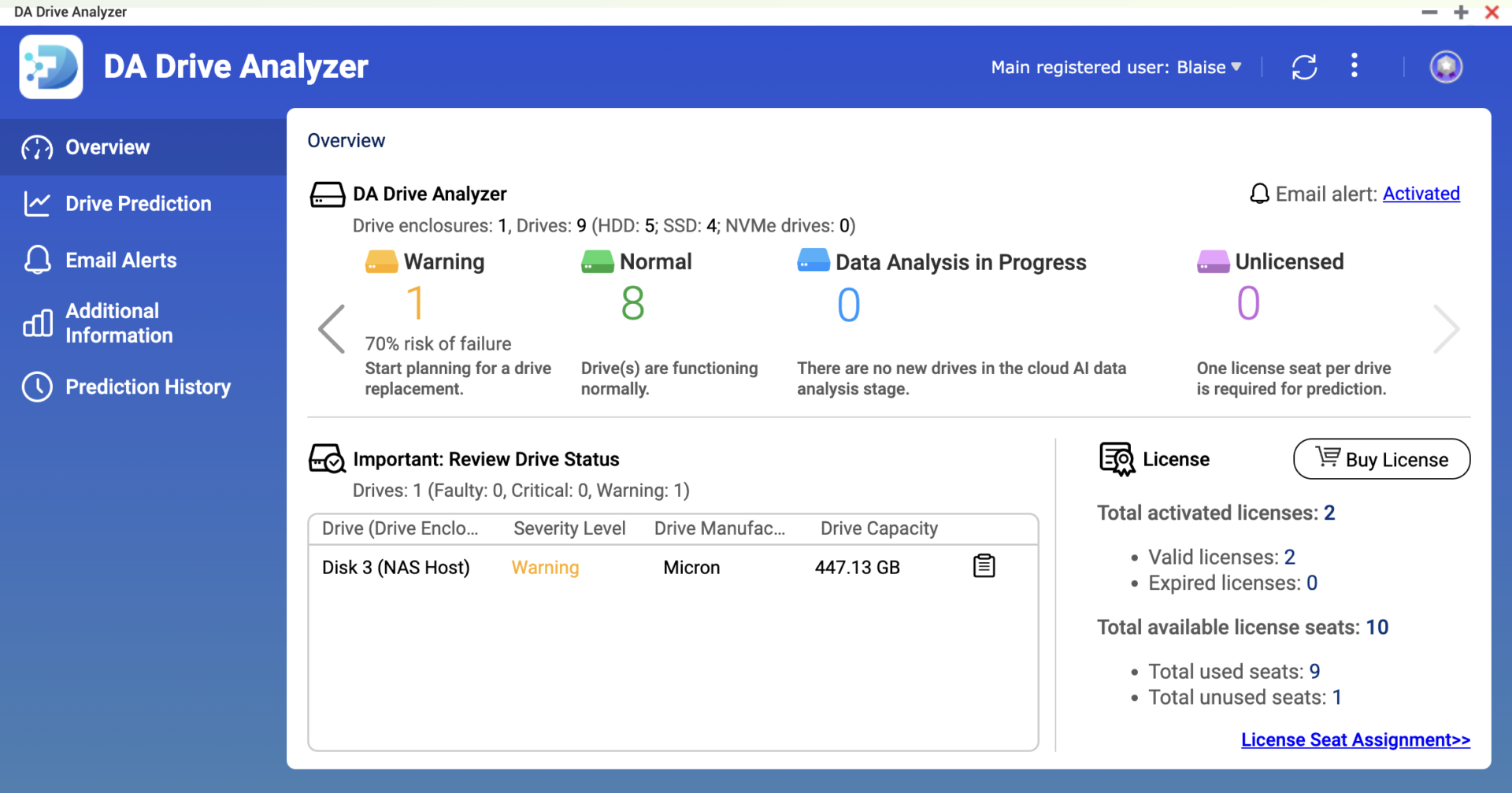 Faulty drives are described as defective drives and will say to replace them. The critical status says that there is a 90% risk of failure and to replace the drive ASAP. The warning status says 70% risk of failure and start planning for replacement, and the normal status means normal. Underneath the status signs, there is a table of each disk, severity level, drive type, and size. Normal drives won’t show up in this table.

The next area on the DA Drive Analyzer application is the Drive Prediction tab. Drive Prediction is the main focus behind this application for QNAP systems as this is where users and admins are able to see how each drive is individually operating, classified by the color-coded system. Admins will see which drive bays are populated and clicking on the drive will show where it is in the system, along with the Drive Life Prediction Score that will display the color code along with the likelihood of failure and when to replace. 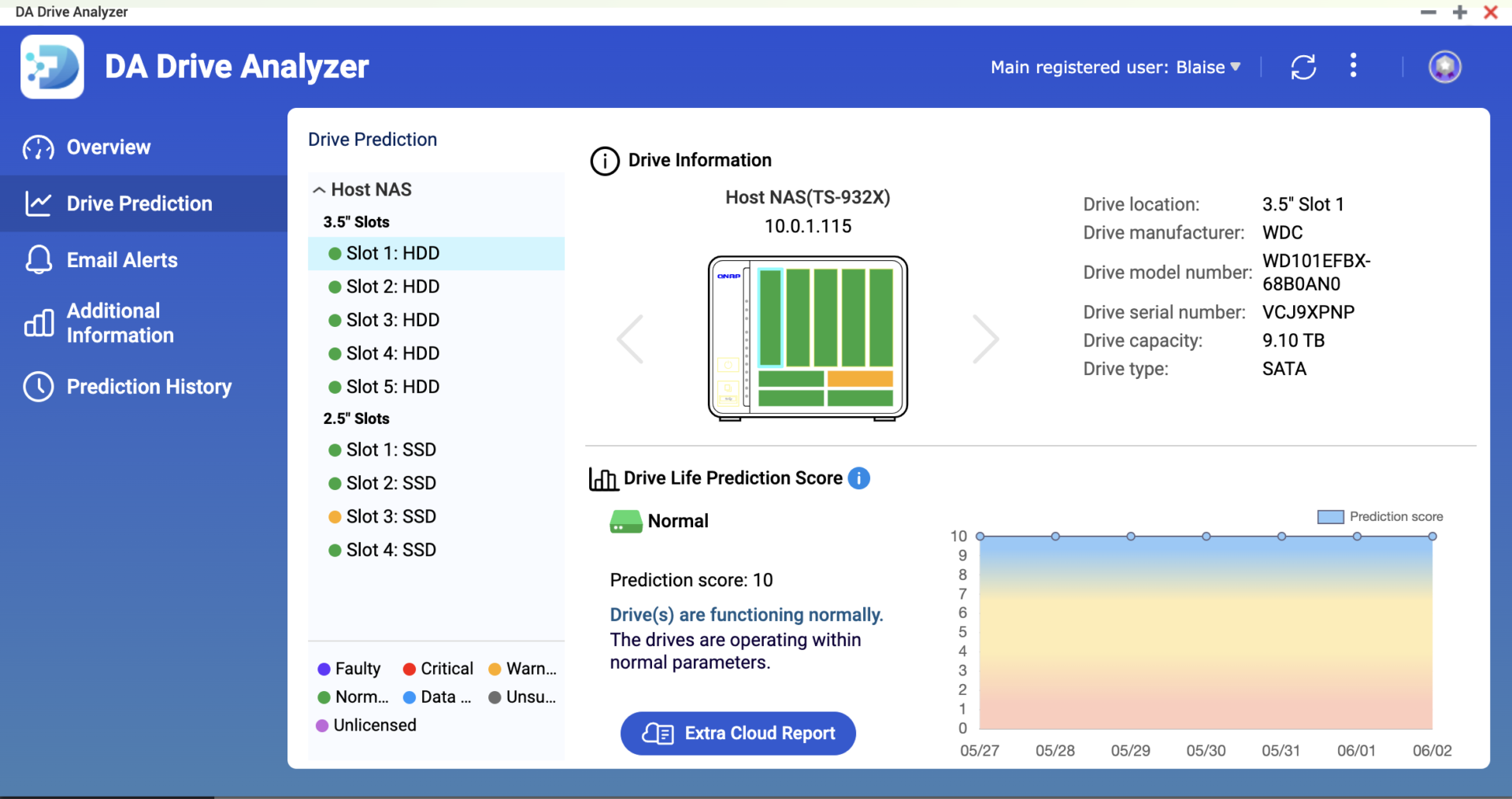 Furthermore, for those that want a more in-depth record of how the drive is operating, users are able to go into the details for the drive to see the Drive Life Prediction Score, the temperature, IOPS test, and the S.M.A.R.T. Attributes of the drive. These extended details can really help those to see where the drive may be failing and show the timeline of how long the drive has been nearly failing. 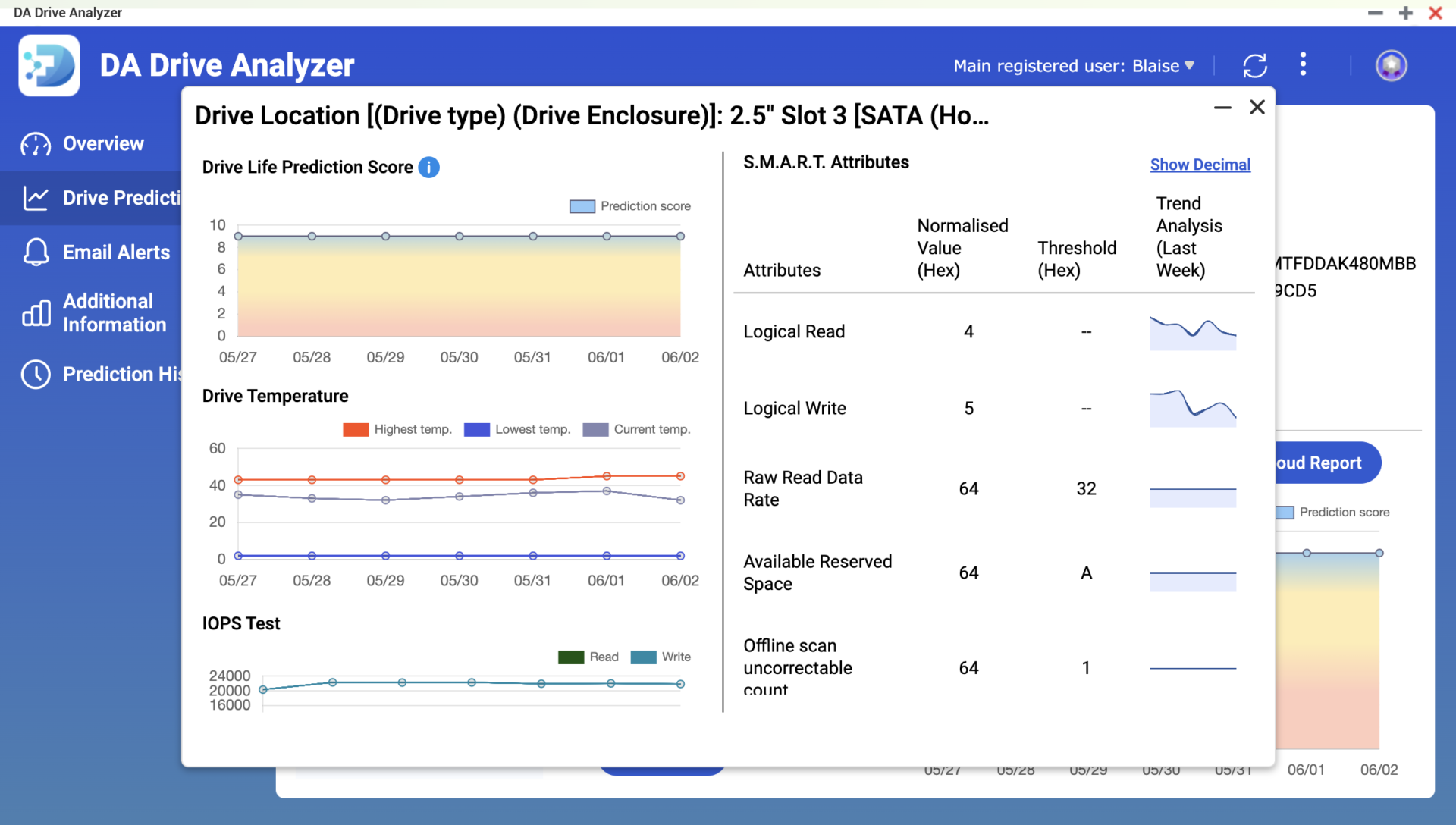 On the system we ran Drive Analyzer on, one drive did catch the eye of the AI predictions. A single SSD was called out as having a 70% risk of failure, which was interesting as it didn’t even have SMART errors present.

This Micron M500DC was called out during the beta period as well as during the final software test and has not failed yet. We have put this drive under a watchful eye though to see if that changes at a point in the future. 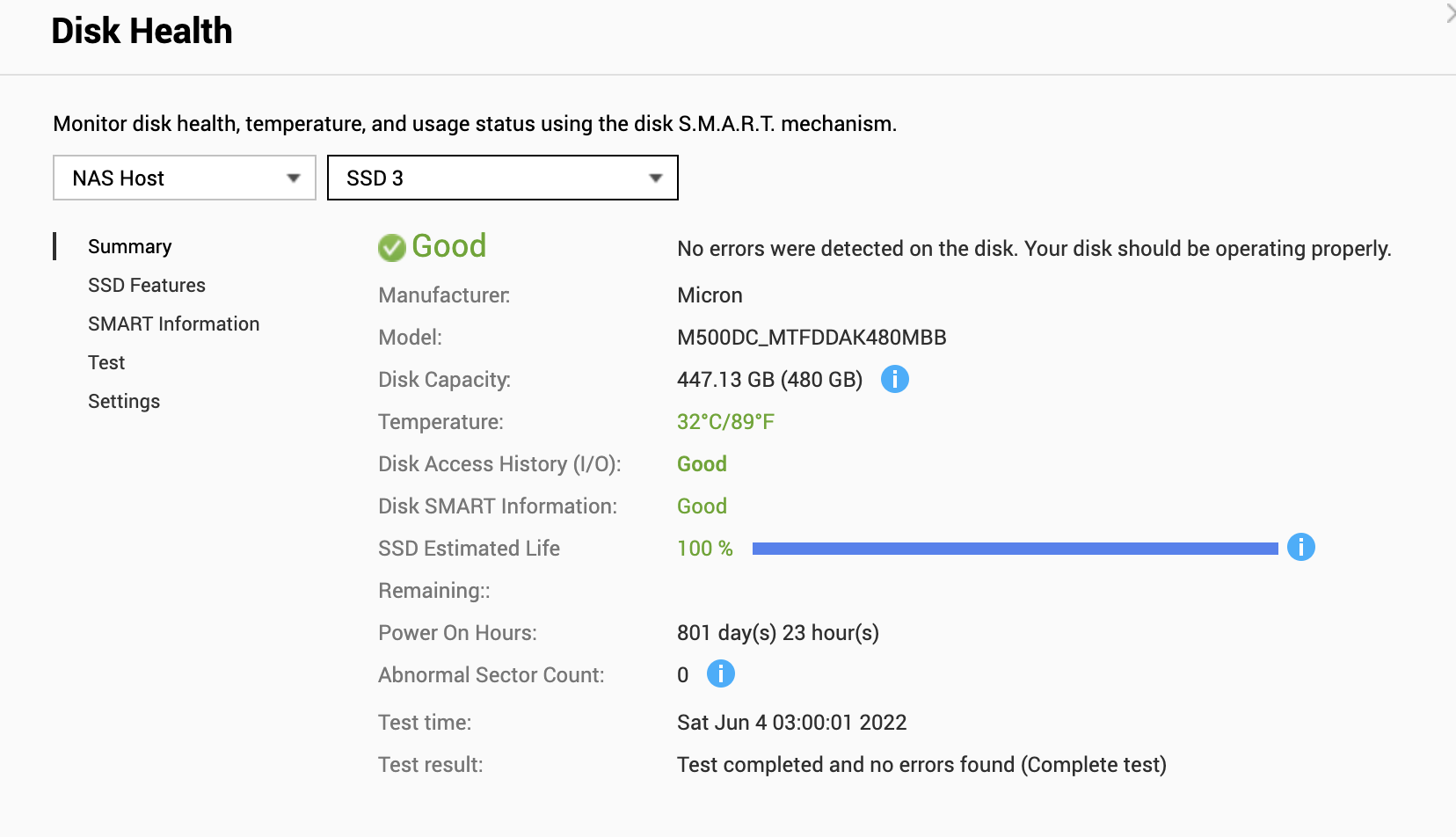 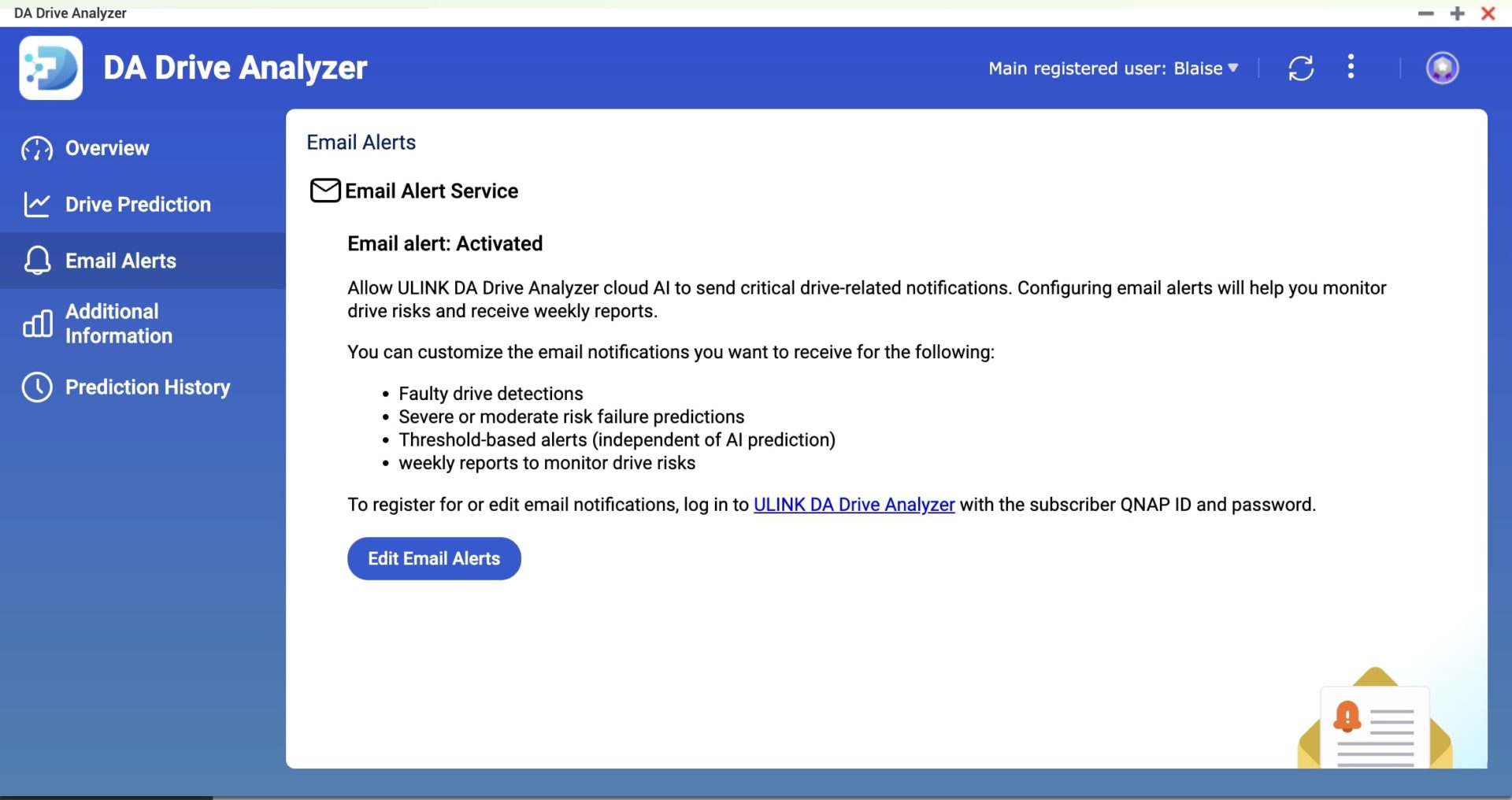 The Additional Information tab gives admins a decent overview of the drives populated and the AU prediction status of the system. This tab is more of an entire system overview that collects all the information from the other tabs and admins are able to do a quick scan of the system to see what is working and the potential threats. 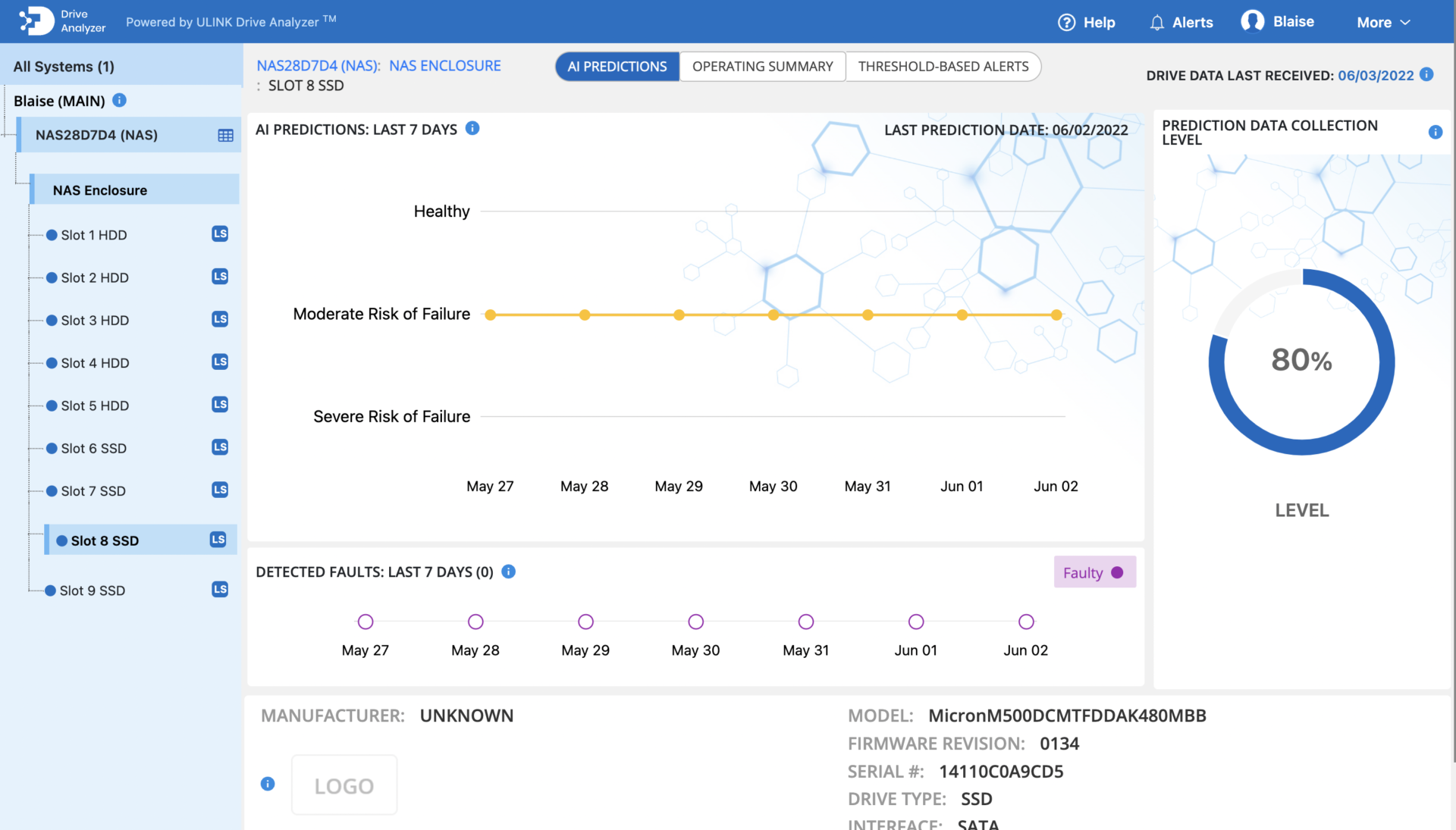 The last tab on the application is Prediction History. This tab displays a long recorded list of the alert date, the drive that is being affected, the drive model and serial number, the drive type, and the severity level. This is a really cool feature as admins are able to see a detailed system history and see how often drives are failing. This list can also be downloaded as a .CSV file for those that would rather look at it differently. 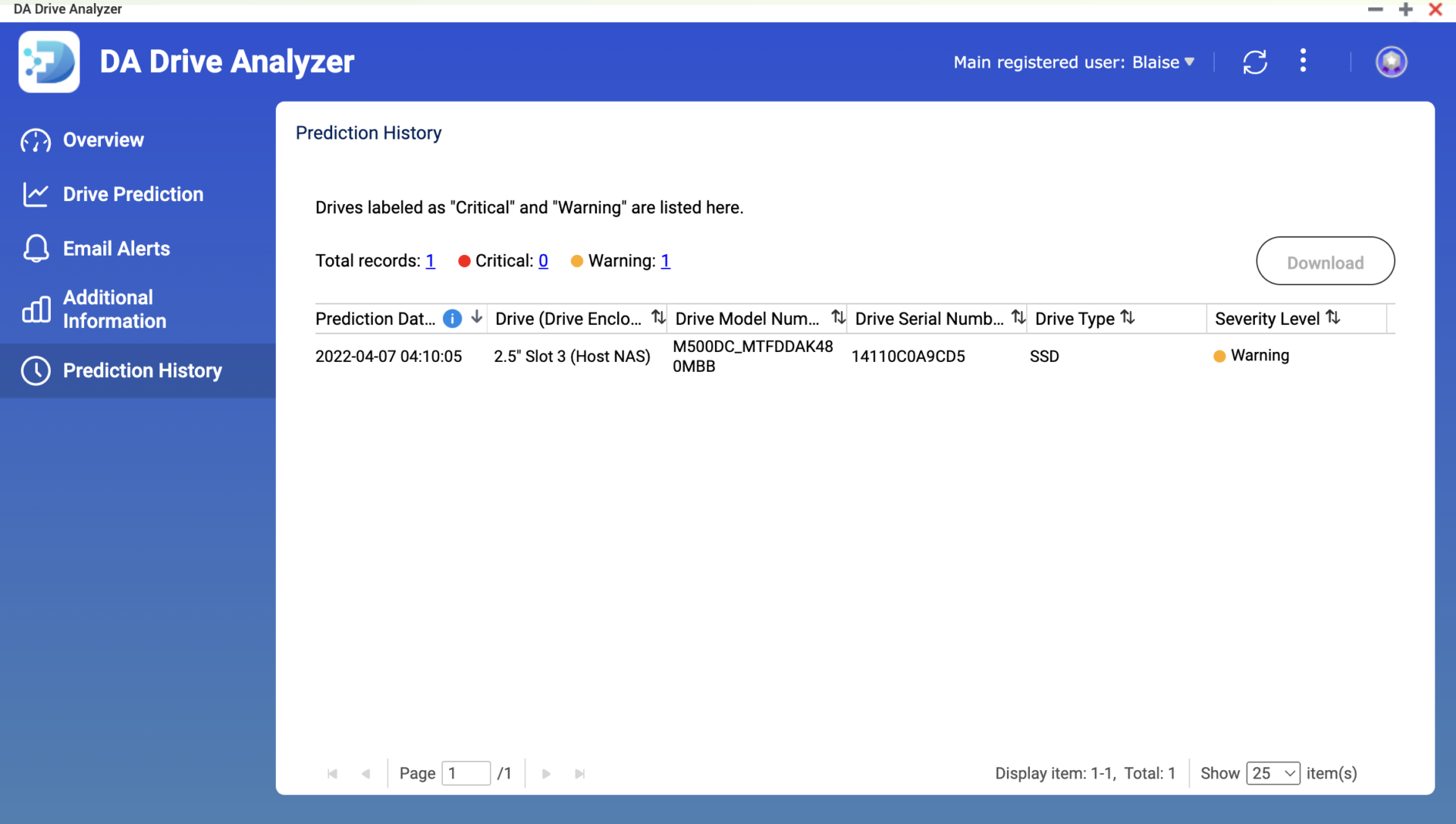 Another thing that the DA Drive Analyzer shows off is the DA Desktop Suite. The Desktop Suite is a Windows Application that allows users to monitor several devices for multiple users. The way that the Desktop Suite works is that there is a feature called DA Monitor that works in the background to monitor the devices and accounts to alert the user about potential threats, especially handy for IT support and maintenance or service providers. 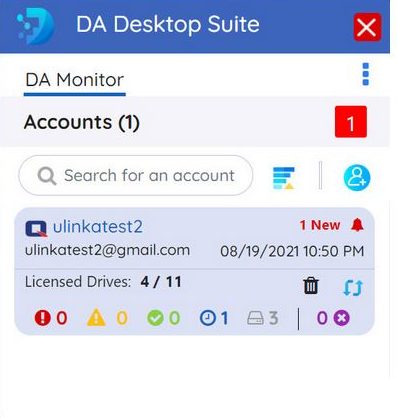 As more people are deploying NASs to either work from home or simply for personal reasons to house data that isn’t just on the host device, predicting problems before they start is a big thing for many people. The QNAP DA Drive Analyzer application is designed to fill a niche for IT staff and diligent home users.  It gives access to tools that will raise awareness of data integrity without having to sort through the system logs or guess how the drive is currently doing based on the physical age of the HDD, SSD, or NVMe drive. 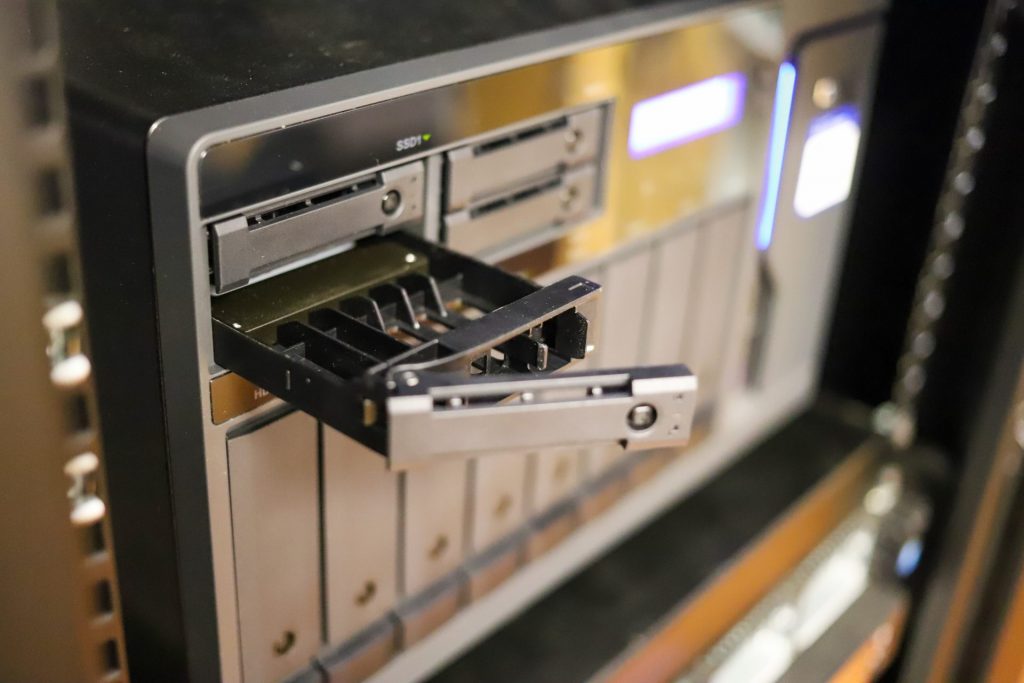 With the DA Drive Analyzer application, users and admins have many features right at the tip of their fingers. With the drive overview, there is a listing of the number of drives per severity status and the number of licenses active. In the Drive Prediciton, the system can accurately say each severity status of the drive and give a detailed S.M.A.R.T diagnosis. With Prediciton History, admins can see a full history of the system and can accurately see how often drives have failed and which ones.

The ULINK DA Drive Analyzer application for QNAP systems is currently running at two different plans for users. There is a yearly plan for $5.00/per drive/per year, and there is also a quarterly plan (3-months/90 days) for $1.50/per drive. Reasonable pricing for a complex AI system but can get pricey depending on the number of drives in a system.