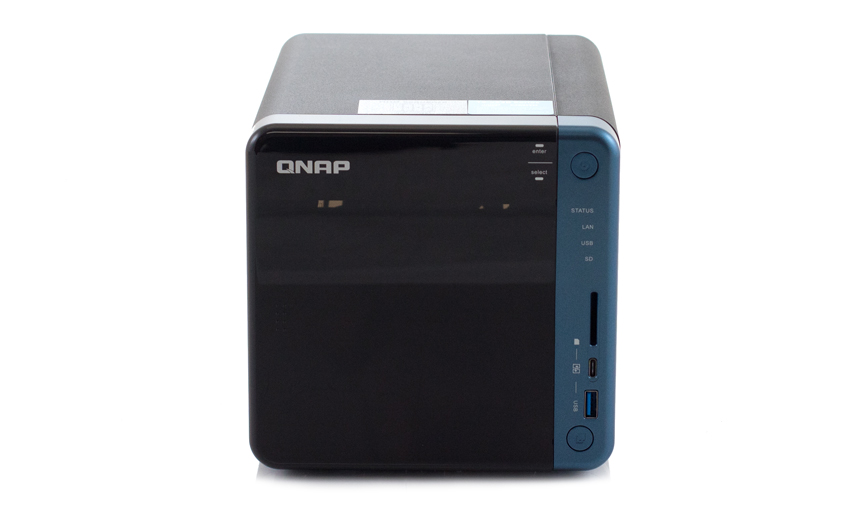 Equipped with a PCIe port, the TS-453B can tackle a range of different storage use cases, making it a very flexible NAS. For example, when outfitted with the QNAP QM2 expansion card, users can install an M.2 SSD for cache. A 10GbE networking card is another option. Users can also choose to install a compatible wireless card to turn the TS-453B into a wireless access point, or add a USB 3.1 10Gbps card for faster backup to and from external storage devices.

The TS-453B features a USB Type-C QuickAccess port and an SD card slot, which helps makes file transfers and sharing files quick and easy and without the need for a network connection. Like all QNAP NAS devices from this class, the TS-453B is also highlighted by its multimedia functionality, including 4K (30Hz) video playback and both real-time and offline transcoding.

With its Intel Celeron J3455 quad-core 1.5GHz CPU, (up to) 8GB DDR3L RAM, dual Gigabit LAN ports, and SATA 6Gb/s, the TS-453B is quoted to deliver upwards of 225MB/s for both read and write speeds. QNAP also claims that it can reach these speeds when using the Intel AES-NI hardware-accelerated encryption (AES 256-bit) for both full NAS volumes and shared folders, giving users a peace of mind that their data is safe and secure without having to sacrifice performance.

Like the other models from the TS-x53B line, the TS-453B features a sleek a smooth plastic build highlighted by an aqua green panel. All models from this line have the same connectivity and functionality on this panel:  power button, LEDs (status, drive and LAN), SD Card slot, USB QuickAccess port/LED (Type-C), USB 3.0 One Touch Copy port, and USB One Touch Copy button. 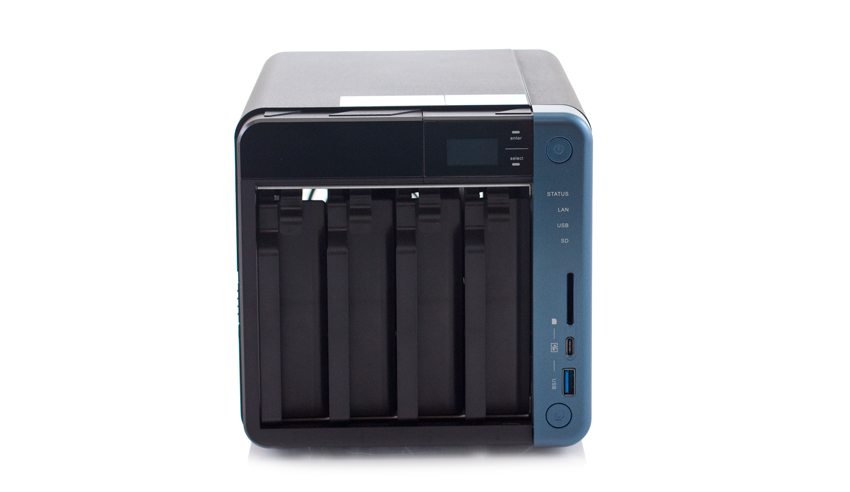 On the left side is the OLED panel with an enter and select button for navigation, allowing users to restart and power off, configure or change the OLED panel password, view and configure network settings, and to see information on the system, physical disks, and volumes of the TS-453B. 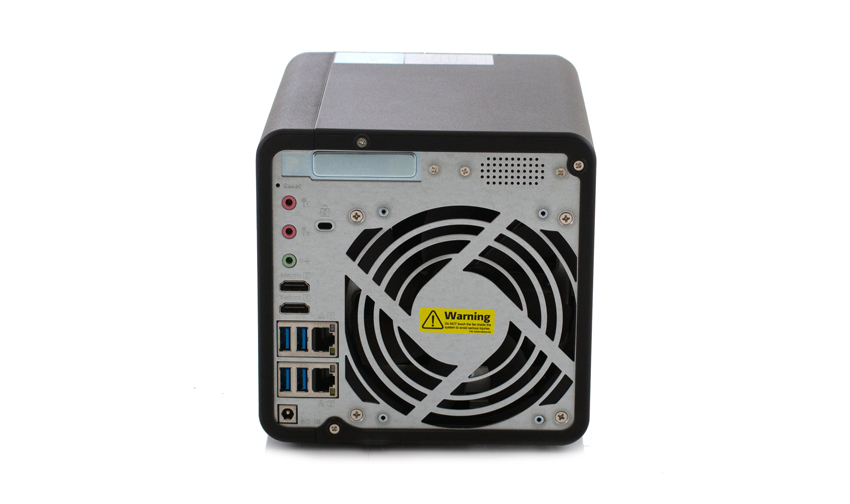 Turning the NAS around to the back panel reveals the 1 x 7cm system fan. To the left is the PCIe slot (with cover), 3.5 mm speaker and microphone jacks, 2 HDMI ports, a reset button, 4 USB 3.0 ports, 2 Gigabit RJ45 Ethernet ports, a Kensington security slot and a Power input port.

For max latency performance, the QNAP TS-453B recorded its best read and write performance in our iSCSI configuration with 1127.3ms and 2999.6ms, respectively

Our next benchmark measures 100% 8K sequential throughput with a 16T/16Q load in 100% read and 100% write operations. The TS-453B recorded its best write performance by a significant margin under iSCSI with 28,314 IOPS (vs. 16,894 IOPS under CIFS); however, read speeds were almost identical.

Compared to the fixed 16 thread, 16 queue max workload we performed in the 100% 4K write test, our mixed workload profiles scale the performance across a wide range of thread/queue combinations. In these tests, we span workload intensity from 2 threads and 2 queue up to 16 threads and 16 queue. When looking at throughput, and the QNAP TS-453B iSCSI connectivity had the best performance with a range of 437 IOPS to 750 IOPS. CIFS managed to record an essentially static performance of 326 IOPS to 334 IOPS.

Looking at maximum latency showed a similar trend, as QNAP TS-453B showed solid burst performance when configured in iSCSI with 672.64ms and ended up with 3505.22ms.

Our last test in our small NAS Synthetic Workload testing is the 128K test, which is a large block sequential test that shows the highest sequential transfer speed. When looking at the 128K performance of 100% write and 100% read activity, the TS-453B showed very similar performance in iSCSI and CIFS, with 211MB/s read and 231MB/s write, and 212MB/s and 230MB/s write, respectively.

Like the 2-bay model, the TS-453B is an impressive small business NAS from QNAP highlighted by its comprehensive NAS features for the Linux open-source platform. Powered by an Intel Celeron quad-core 1.5GHz CPU, 8GB of DDR3L RAM, and dual Gigabit LAN ports, this completely redesigned NAS line features good performance under Intel’s AES-NI hardware-accelerated encryption engine. The TS-453B also features an extremely useful PCIe slot, which adds a ton a versatility to the NAS.

The TS-453B also caters to the entertainment-centric consumer demographic as well, featuring a real-time and offline 4K transcoding, two HDMI ports, and two 13.5 mm speaker and microphone jacks. And, like all models from this line, it supports the one-way sync data to cloud storage via RTRR, Rsync, FTP, SMB protocol, as well as two-way sync NAS devices with remote NAS/cloud services including Amazon S3, Microsoft Azure and Dropbox.

Though the 4-bay model is virtually identical to the TS-253 as far as components go, it delivered slightly better performance overall. First, we measured 4K performance, which had its best read performance under iSCSI with 2,216 IOPS, while showing its best write performance under CIFS with 701 IOPS. Looking at 100% 8K sequential throughput, the TS-453B recorded its best read activity by far when with iSCSI connectivity (28,314 IOPS), though write speeds were virtually identical. In our large block sequential 128K test, the TS-453B posted similar performance across the board, with 211B/s read and 231MB/s write, and 212MB/s and 230MB/s write, respectively.

The newly designed TS-453B offers solid performance and will suit the needs of most small businesses. The 4-bay model also adds a bit extra versatility for those looking for a bit more storage than what a 2-bay model can provide.