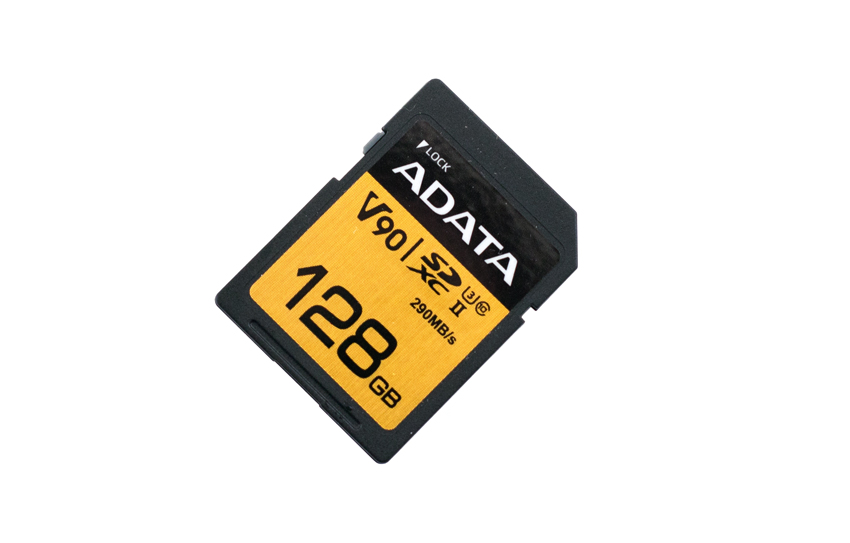 ADATA’s latest removable storage cards start at 64GB and tops out at 256GB, enabling the storage of up to 26 hours of 1080P video. Rival companies offer SDXC cards with twice that capacity, but with slower read/write speeds. That better performance costs extra, so the Premier ONE line doesn’t offer the lowest MB per dollar.

These SD cards aren’t delicate, as ADATA promises they are waterproof, shockproof, and X-ray proof, and can survive reasonable amounts of static as well as temperatures ranging from 185 degrees Fahrenheit down to -13 degrees. They are made with multi-level cell (MLC) Flash chips, so can be rewritten 3,000 to 10,000 times.

Naturally, the Premier ONE SDXC UHS-II Card has the typical shape of any SD card, making it about the size of a postage stamp. The front has an ADATA logo on a black background, then some product specifications in black on gold. The capacity of the card is most prominent. 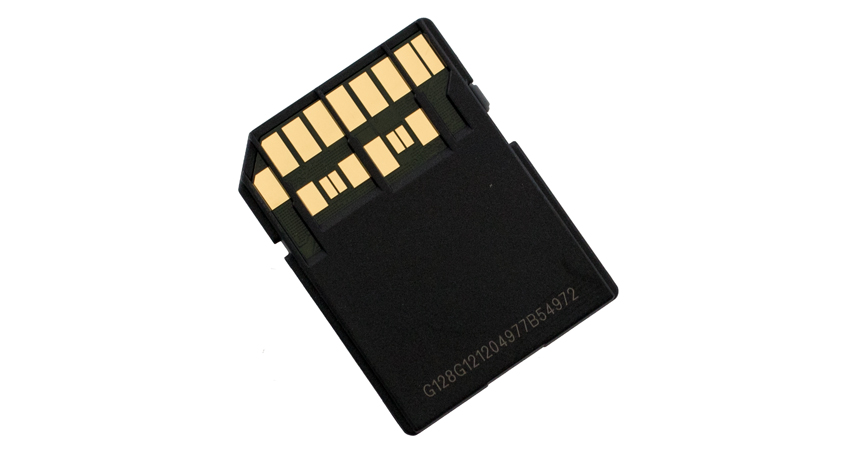 On the back is the standard row of metallic contacts, but there’s also a second row required for UHS-II support. Cameras and other devices that don’t have this ultra high-speed bus can still access the contents of the card through the standard connectors, just at slower UHS-I speeds. On the left side is a small switch that prevents the contents of the card from being erased. This is a feature that even professional photographers sometimes forget about.

In this review, we will compare the new Premier ONE SDXC UHS-II Card to the following:

Our test unit is the 128GB version of the Premier ONE.

We used a HP Z2 mini Workstation for our testing, and found the ADATA card’s 2MB sequential read speed to be 140.5MB/s and sequential write speed to be 120.5MB/s. The Toshiba card we used for comparison offers considerably better performance, with 248.3MB/s read and 171.8MB/s write. The same is true of the Lexar card, with 259.0MB/s read and 177.3MB/s write.

For 4K random IOPS transfers, the Premier ONE card had 1,738 IOPS read and 269 IOPS write. The Exceria posted 2529 IOPS and 146 IOPS in read and write, respectively, so the ADATA card came out ahead in just one area. The Lexar card’s IOPS performance wasn’t tested.

Even though the ADATA benchmarked slower than other professional-grade SDXC cards, it’s nevertheless much faster than consumer-grade cards, as well as older pro cards. For example, the Premier ONE blows past the 104MB/s theoretical top speed of all UHS-I cards.

Professional photographers are the target market for the ADATA Premier ONE SDXC UHS-II Card, as it offers speedy performance recording images or video, and ever faster when transferring files to other media. That said, our tests showed that its 140.5MB/s and 120.5MB/s sequential read and write speeds didn’t live up to ADATA’s promises, and were significantly slower than rival cards from Toshiba and Lexar.

The ADATA Premier ONE series includes one of the very few 256GB SDXC cards with UHS-II support. There’s more competition in the 128GB and 64GB capacities, where ADATA’s offering stands up well in price, if not in performance.

Though not the quickest SDXC card available, the ADATA Premier ONE is still faster than non-professional removable storage cards at capturing high-definition images and video.

ADATA Premier ONE on Amazon