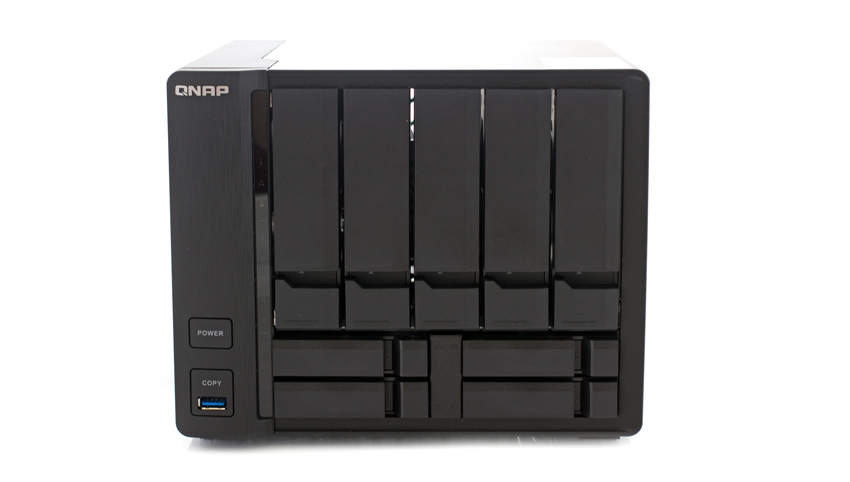 The QNAP TS-963X sports a hybrid design. Five bays are 3.5”/2.5”, able to hold HDDs or SSDs, while the other four bays use the 2.5” form factor – used to install SSDs. With this hybrid design, users can utilize enterprise-grade technology such as SSD caching, tiering, and flash volumes. With these enhancements in play, in addition to the 10GbE connectivity with the 10GBASE-T port that allows for quicker application performance (such as database transfers, virtual machine storages, and big data backups), businesses are bound to experience an accelerated workflow

The QNAP TS-963X is very similar to the others in the 9-bay family in terms of aesthetics. The TS-963X comes with a beautiful matte-black enclosure – not uncommon to other NAS in QNAP’s line. The front has nine drive bays total, where it houses five 3.5” HDD’s and four 2.5” SSD’s. Each bay has its own locking mechanism and status LED. At the top-left of the front, you’ll see the QNAP branding. On the bottom-left, you’ll find a USB 3.0 slot, along with the USB Copy and Power button. 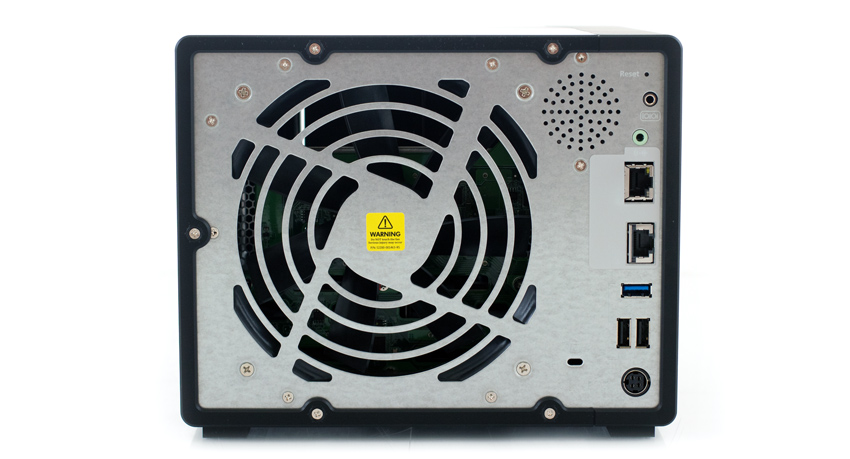 The sides of the NAS are sleek and clean, having only a small ventilation system towards the front of the NAS on the right side.

Turning the NAS around, you’ll find all of the connectivity and QNAP’s heat sink. Taking up most of the space on the back is Smart Fan. To the right of the fan is a 10GBASE-T (supporting NBASE-T), and a Gigabit LAN port. You’ll also find one USB 3.0 port, two USB 2.0 ports, 3.5 mm line-out jack, Kensington security slot, power input, and reset button.

Testing Background and Comparables for the QNAP TS-963X

Our first benchmark measures the performance of random 4k transfers comprised of 100% write and 100% read activity.

Compared to the fixed 16 thread, 16 queue max workload we performed in the 100% 4k write test, our mixed workload profiles scale the performance across a wide range of thread/queue combinations. In these tests, we span workload intensity from 2 threads and 2 queue up to 16 threads and 16 queue. Looking at throughput with SSD’s, the QNAP TS-963X posted its best performance by far in the iSCSI configuration with a range of 7,411 IOPS in burst and 19,867 IOPS in the end (16 Threads, 16 Queue). The story was similar in the HDD configuration results, with best performance in iSCSI configuration showing 400 IOPS at burst and 767 IOPS in the end. 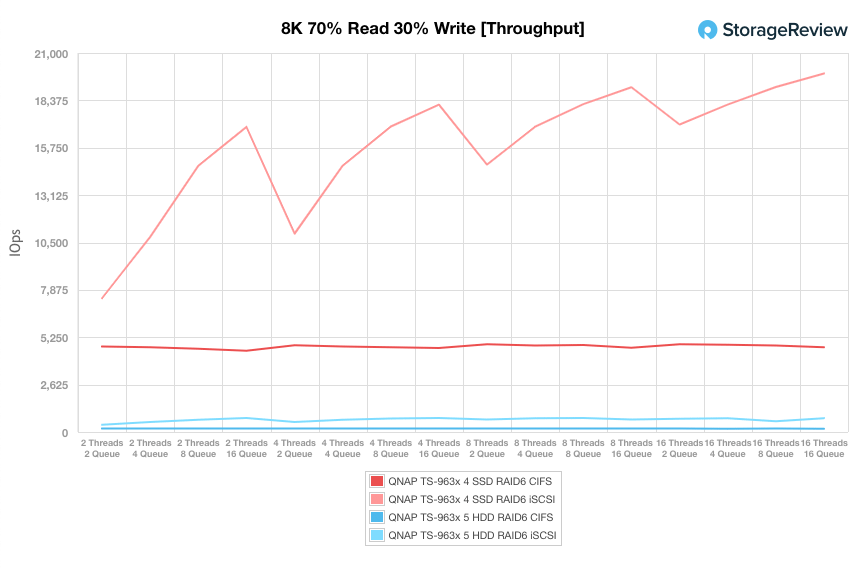 With average response times, iSCSI continues to be the best performing configuration, showing a latency range of 0.53ms through 12.88ms, while CIFS posted results of 0.84ms through 54.53ms. The trend continues with our HDD configuration, with 10ms through 332.71ms in iSCSI vs. 21.05ms through 1,359.7ms in CIFS. 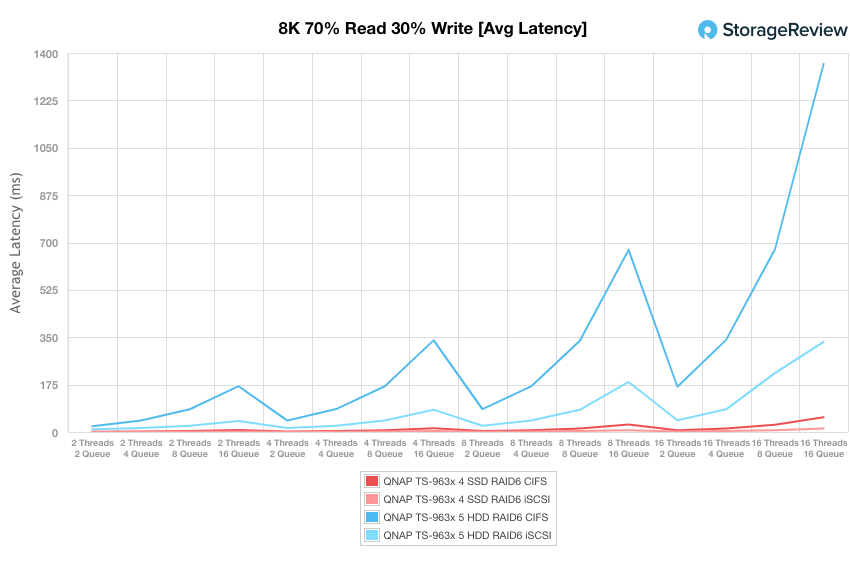 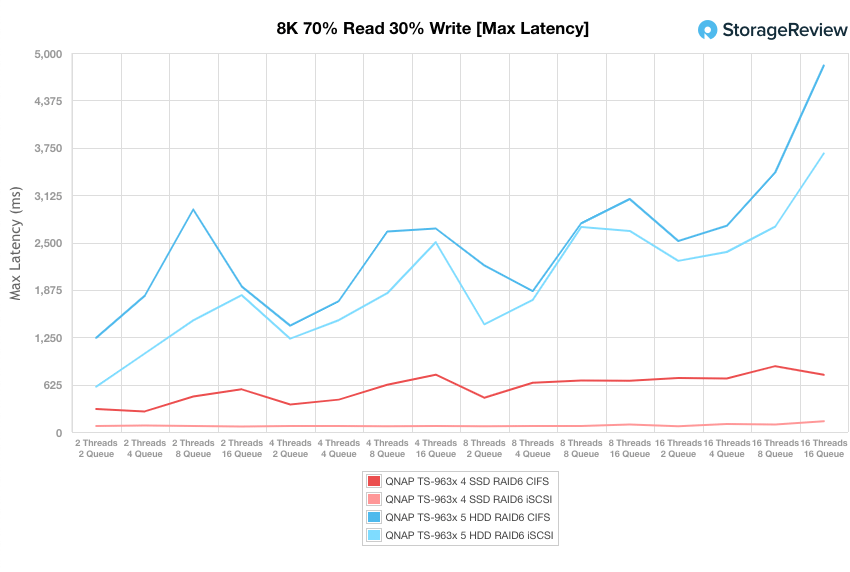 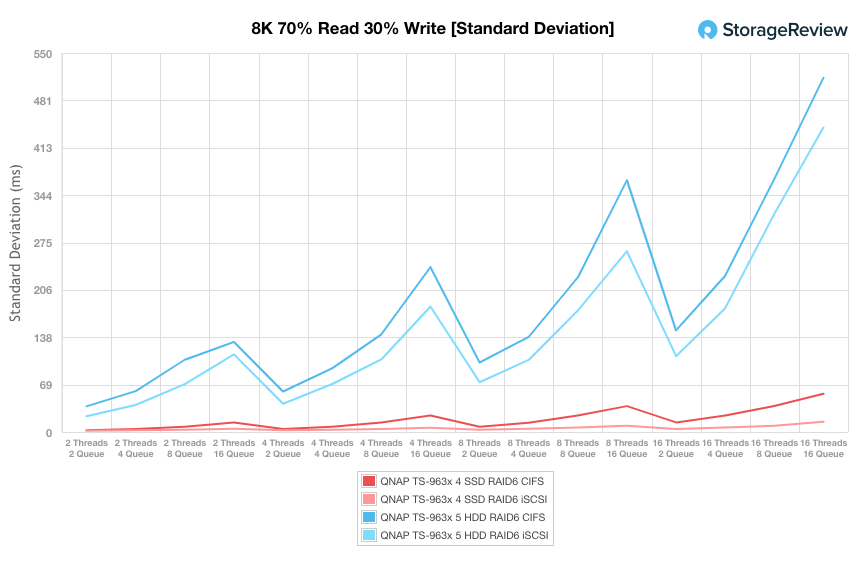 The QNAP TS-963X is the third installment of QNAP’s 9-bay tower NAS series; and it is a solid addition. The TS-963X is an ideal NAS for small and medium-sized businesses. Equipped with five 3.5” bays and four 2.5” bays for SSDs, utilizing features such as Tiering and Caching, along with its 10GBASE-T port for 10GbE connectivity, the TS-963X has everything a small business would need in terms of storage capacity and performance. Additionally, the QNAP TS-963X comes packed with applications such as VJBOD, Container Station, and Virtualization Station, allowing you to easily migrate existing applications to or deploy new solutions on the TS-963X.

On the subject of performance, we tested the QNAP TS-963X in configurations of both CIFS (file-level) and iSCSI (block-level). Overall, the results were very good, with iSCSI being the dominant performing configuration throughout most of the tests. In our random 4K benchmark, its top SSD performance was recorded using iSCSI, with 34,948 IOPS read and 16,026 IOPS write. However, CIFS managed to edge ahead in write performance in the HDD configuration, showing 499 IOPS write compared to 429 IOPS when using iSCSI.

During our large-block sequential test, the QNAP TS-963X recorded better results in iSCSI (using HDDs) in both read and write at 500MB/s and 373MB/s, respectively. However, iSCSI and CIFS had virtually identical results in reads with our SSD configuration, with CIFS posting 756MB/s and iSCSI showing 756MB/s.

Overall, with its impressive performance, enterprise features, 10GbE connectivity, and 9 available bays, the QNAP TS-963X would make a great addition to any small business.