The TYAN Transport SX TN70A-B8026 is a 2U rackmount server, based on the Tomcat SX single-socket AMD EPYC motherboard, that’s designed for SME’s and is ideal for real-time analytics, video streaming, software defined storage, in-memory databases, and big data applications.

The TYAN Transport SX TN70A-B8026 is a 2U rackmount server, based on the Tomcat SX single-socket AMD EPYC motherboard, that’s designed for SME’s and is ideal for real-time analytics, video streaming, software defined storage, in-memory databases, and big data applications.

On the hardware side, the Transport SX comes with 24 hot-swappable 2.5” NVMe drive bays and contains two internal 2.5” SATA drive bays. Tyan also proclaims outstanding performance for a single CPU socket, thanks to the AMD EPYC processor. The 14nm CPU supports 8, 16,24, or 32-core processors with up to 64 threads, has support for up to 2TB total RAM per socket on all CPU models, memory speeds up to DDR4-2667, and 128 PCIe lanes. The Transport also features a LAN Mezzanine that supports network speeds of up to 100GbE. Also supported, should additional expansion be required, is an HHHL PCIe x8 card.

The TYAN Transport SX TN70A0-B8026 is a 2U form factor rackmount server with 24 NVMe bays running along the front of the unit. On the left-hand side are two USB 2.0 Ports and, on the right, you’ll find the power, ID, and reset buttons, along with ID and IPMI indicator lights.

On the back of the unit on the left-hand side, you’ll find the dual power supply outlets. Next to those, you’ll see two USB 3.0 ports, a LAN port, VGA and Serial port, and two 1GbE networking ports. With all but one PCIe slot consumed with PCIe breakout cards serving the front-mount NVMe bays, this server isn’t designed for a ton of external connectivity. In this case we populated the single slot with a dual-port 10G SFP+ networking card. 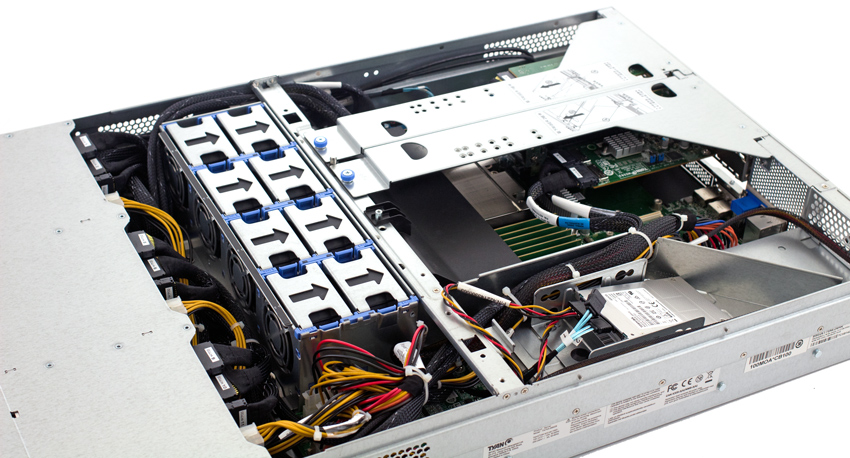 The Tyan Transport SX TN70A-B8026 our team reviewed came well-equipped. On the CPU front, this system included the 2GHz AMD EPYC 32-core/64-thread 7551P CPU and 256GB of DDR4. In our performance tests, we tested with 12 Memblaze NVMe SSDs with our VDBench synthetic tests, configured in JBOD, and in our SQL Server and Sysbench tested across four (1VM per SSD). Workloads were spread out evenly across all drives.

For our transactional SQL Server benchmark, the TYAN Transport SX was able to hit an aggregate score of 12,477.5 TPS with individual VMs running from 3,090.8 TPS to 3,152.6 TPS.

A more telling sign of SQL Server performance is latency. With SQL Server average latency, the Transport SX hit an aggregate score of 65.5ms with individual VMs running anywhere from 14ms to 110ms.

For Sysbench average latency, the Transport SX had an aggregate score of 22.215ms with individual VMs ranging from 20.56ms to 24.03ms.

When it comes to worst-case scenario (99th percentile), the Tyan had an aggregate score of 55.74ms with individual VMs running from 49.91ms to 59.26ms.

Next up is our SQL workloads with the Transport SX started off at 250K IOPS at a latency of 122μs, and saw a slow and steady increase throughout, peaking at 2,448,813 IOPS with a 151.8μs latency.

For VDI Monday Login, the Transport SX started off with 58,894 IOPS at a latency of 115.2μs and rose steadily throughout the test. At the end of the test, we see it kick backwards and forwards a bit, ending with roughly 600K IOPS at a 265.4μs latency.

VDI LC Initial Login showing the Transport start off with 40,477 IOPS at a 120.3μs latency with a straight increase and a small hook at the finish, showing roughly 400K IOPS and a 229.5μs latency.

VDI LC Monday Login had the Transport SX at 51,113 IOPS and a latency of 132μs at kick-off, with another straight increase towards the finish, peaking at roughly 540K IOPS at a 326.6μs latency level.

The TYAN Transport SX TN70A-B8026 is a 2U server that comes with 24 2.5” NVMe drive bays, with two additional 2.5” SATA bays inside the unit. This TYAN server supports the AMD EPYC 7000 series processor and boasts an extremely high memory capacity (for a single socket server) of up to 2TB of RAM with every processor in the AMD EPYC SKU stack.

The system is well put together and gives those in the AMD universe an interesting chassis that can house 24 NVMe drives. For workloads that need a lot of bandwidth, this configuration may be compelling, especially given the savings the single processor can offer in build and software licensing cost. The tradeoff of course is by only having one x8 PCIe slot available, external connectivity is limited to 6.4GB/s. Regardless, the Transport SX is no-doubt an interesting platform with plenty of potential in the right use case.