The Quanta CB220 with LSI Syncro CS is a 2U 2-node network storage appliance tailored for SMB applications. The CB220 is powered by Windows Storage Server 2012 R2 Standard Edition (preloaded for rapid out-of-the-box-deployment) and LSI Syncro CS solution. The two redundant compute nodes are in an active/active cluster enabled by a gigabit Ethernet interconnection. Each node is equipped with two Intel Xeon Processors E5-2609, 64GB of memory, and two GbE ports plus an optional 10GbE port. In order to lower the footprint, both nodes are housed in the same chassis, share the same power supplies, and share the same fans. The device also has an external SAS port for JBOD expansion. The net result is the CB220 is a highly available, fully redundant and fault-tolerant Cluster-in-a-Box (CiB) solution that is simple for businesses with growing data demands to deploy.

The Quanta MESOS CB220 with LSI Syncro CS is a 2U 2-node network storage appliance tailored for SMB applications. The CB220 is powered by Windows Storage Server 2012 R2 Standard Edition (preloaded for rapid out-of-the-box-deployment) and LSI Syncro CS solution. The two redundant compute nodes are in an active/active cluster enabled by a gigabit Ethernet interconnection. Each node is equipped with two Intel Xeon Processors E5-2609, 64GB of memory, and two GbE ports plus an optional 10GbE port. In order to lower the footprint, both nodes are housed in the same chassis, share the same power supplies, and share the same fans. The device also has an external SAS port for JBOD expansion. The net result is the CB220 is a highly available, fully redundant and fault-tolerant Cluster-in-a-Box (CiB) solution that is simple for businesses with growing data demands to deploy.

The Quanta MESOS CB220 with LSI Syncro CS solutions use two storage RAID controllers that are designed to provide continuous application uptime with less complexity than existing high availability solutions. If one server node fails, the other node will seamlessly take over all I/O activities. To further provide a redundant and simplified failover cluster function, the two nodes share the storage in a single CiB form factor. Sharing the same chassis not only provides lower power consumption, but also doubles density, and simplifies cable management.

The Quanta MESOS CB220 has a street price of roughly $9,200 without disks.

The Quanta CB220 is a CiB solution with two compute nodes and front-access storage in a compact 2U chassis. The front of the appliance has power and ID lights/buttons on either side for each compute node as well as 12 3.5″ HDD trays running across the middle.

The rear of the system has access to both nodes one on each side. Along the bottom of each node are the management ports for USB, VGA, KVM, 1GbE and 10GbE network. On the top left-hand side of each node is the mini-SAS port for external connection to JBOD expansion. In the center of the device is the shared cooling and power connections.

The nodes can be removed through back to access the LSI SAS 9271-8i HA-DAS controller on the right-hand side of each node. Directly behind the LSI controller is a 2.5″ SATA Boot Drive. For easy installation and maintenance, the CB220 comes with a sliding rail kit that goes from 24″ at its shortest to 36″ at its longest length.

The Quanta CB220 was benchmarked in our enterprise test lab using a Lenovo ThinkServer RD530 with the following configuration:

Our first benchmark of the Quanta CB220 is our Microsoft SQL Server OLTP Benchmark that simulates application workloads similar to those the Quanta CB220 and its comparables are designed to serve.

Looking at the TPS performance of each array in our SQL TPC-C 15k VU test, models that supported some amount of flash, leveraged 10K HDDs, or had larger groups of 3.5″ HDDs performed fairly well. The Quanta CB220 did have the lowest overall throughput at 2,426TPS, although compared to the other setups we’ve tested it had the fewest and slowest spindle HDDs tested. 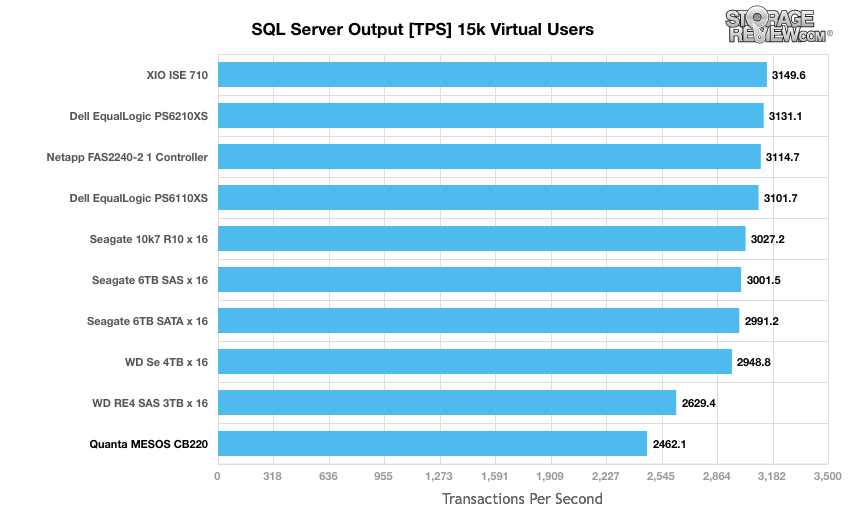 We measured average latency of 1,351ms from the Quanta CB220, which feel behind other better-equipped systems that we’ve tested. 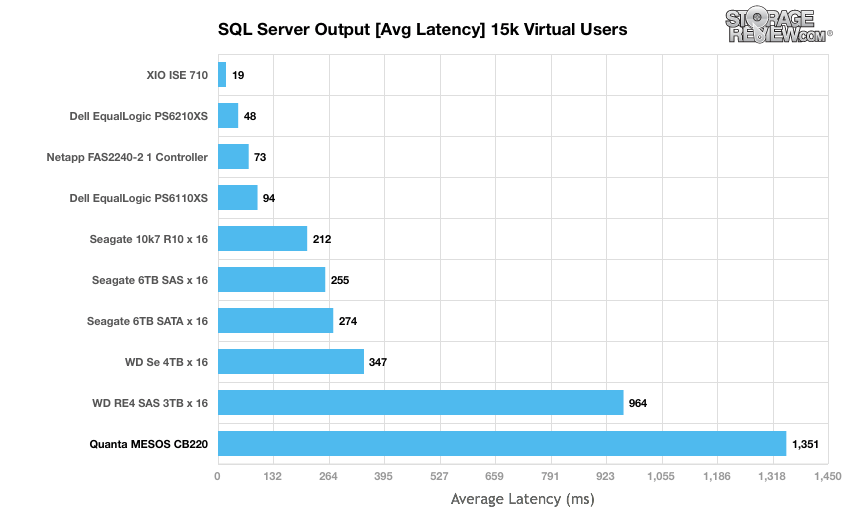 In the first workload, we measured a long sample of random 4k performance with 100% write and 100% read activity. During the random 4K throughput test we saw higher activity with the SMB. While the write activity was almost the same for both, the iSCSI was 2,107IOPS and the SMB was 2,128IOPS, the SMB was much higher on the read throughput at 4,689IOPS compared to the iSCSI that was 3,333IOPS.

The average latency uses a large effective queue depth of 256. We saw results similar to the above with the write latency being about equal, though the SMB was slightly better at 120.23ms to the iSCSI’s 121.43ms, and the SMB clearly had better latency with read activity, the SMB had a read latency of 54.58ms and the iSCSI had a read latency of 76.79ms.

The maximum latency results reflect the worst case latency during the 4k benchmark. While the SMB had been performing better we did see a huge spike here with the read activity, all the way up to 1,604.8ms. The SMB did have slightly lower write latency at 385ms compare to the iSCSI’s write latency of 412ms.

In contrast to the maximum latency report, standard deviation reflects how consistent the Quanta MESOS CB220 with LSI Syncro CS was able to seatain latency performance rather than the worst case scenario. We saw similar results to those above however the SMB read wasn’t quite so high running at 71.82ms while the iSCSI read was 28.99ms, both write latencies were again close with the SMB being slightly better at 7.85ms, the iSCSI write latency was 12.56ms.

The next synthetic enterprise benchmark measures throughput with an 8k transfer size and 70% read operations and 30% write operations. This benchmark utilizes a variety of thread and queue depth combinations from 2 threads and a queue of 2 up to 16 threads and a queue depth of 16. The SMB started off and stayed in the lead the entire time. The SMB peaked at 3,283IOPS.

Charting the average latency in the 8k 70% read and 30% write benchmark shows similar results to the above with the SMB starting off and then maintaining the lead with a lower latency throughout.

With max latency we again see a big shift in results. The SMB again spiked high numbers, as high as 1,152.56ms in higher queue depths. The iSCSI had a more consistent showing of latency.

Plotting standard deviation in latency results for the 8k 70/30 benchmark had both the SMB and iSCSI running together but as we moved into higher queue depths the iSCSI showed a better performance running at lower latency.

The Quanta MESOS CB220 with LSI Syncro CS is 2U 2-node network storage appliance that features a highly available, fully redundant, and fault-tolerant storage. Each node is powered by two Intel Xeon Processors E5-2609, comes with 64GB of memory, and has two GbE ports plus an optional 10GbE port. Unlike traditional clustered solutions, the CB220 doesn’t require an external shared disk enclosure as both nodes are housed in the same chassis, which in turn saves on energy consumption and cooling.

In our benchmarks we configured our CB220 review unit to be geared primarily towards bulk storage with its configuration of 12 3.5″ 7k HDDs. This was reflected in our SQL Server performance numbers, which many of our comparables either use 10K HDD or leverage flash in some fashion. In terms of peak I/O we were able to pull up to 59k sequential IOPS write in our 8K workload over SMB, dropping to around 2,128 IOPS write with a random 4K workload also over SMB. Peak bandwidth from the CB220 measured 1.15GB/s write and 1.03GB/s write over iSCSI, while CIFS bandwidth came in lower at 1.16B/s read and 588MB/s write. Of course the CB220 could be configured with faster disks or even SSDs, but that’s not the point for Syncro solutions, they’re really tailored toward mainstream use cases that have more of a budgetary or capacity need than a performance one.

Like most Syncro-based solutions, the CB220 is easy to configure and deploy. An IT generalist can work in a comfortable Windows-based environment to deploy and manage the storage with little concern. The redundancy features of course also provide peace of mind when it comes to availability. In the event of a failure, most components are easy to swap in the field, ensuring storage up time. When it comes to a simple self-contained Syncro deployment, the Quanta CB220 is about as straightforward as it gets.

The Quanta CB220 with LSI Syncro CS is a 2U 2-node network storage appliance with failover protection that is aimed at small to medium businesses that need highly-available storage with a more modest budget. The CB220 gets the job done with little flare, emphasizing simple deployment and management instead.