Like the mSATA model, the Samsung 850 EVO M.2 is very similar to its impressive 2.5 inch brethren; however, it has the added benefit of not being limited by mSATA’s legacy architecture. Another advantage of the M.2 form factor is that it comprised of a much smaller footprint compared to traditional SSD sizes, all without having to sacrifice capacity. Its unique thin and light form factor also allows the tiny storage solution to be deployed in wide range of use cases, everything from the most recent Ultrabooks that require high performance, to the latest tablets.

Like the mSATA model, the Samsung 850 EVO M.2 is very similar to its impressive 2.5 inch brethren; however, it has the added benefit of not being limited by mSATA’s legacy architecture. Another advantage of the M.2 form factor is that it comprised of a much smaller footprint compared to traditional SSD sizes, all without having to sacrifice capacity. Its unique thin and light form factor also allows the tiny storage solution to be deployed in wide range of use cases, everything from the most recent Ultrabooks that require high performance, to the latest tablets. 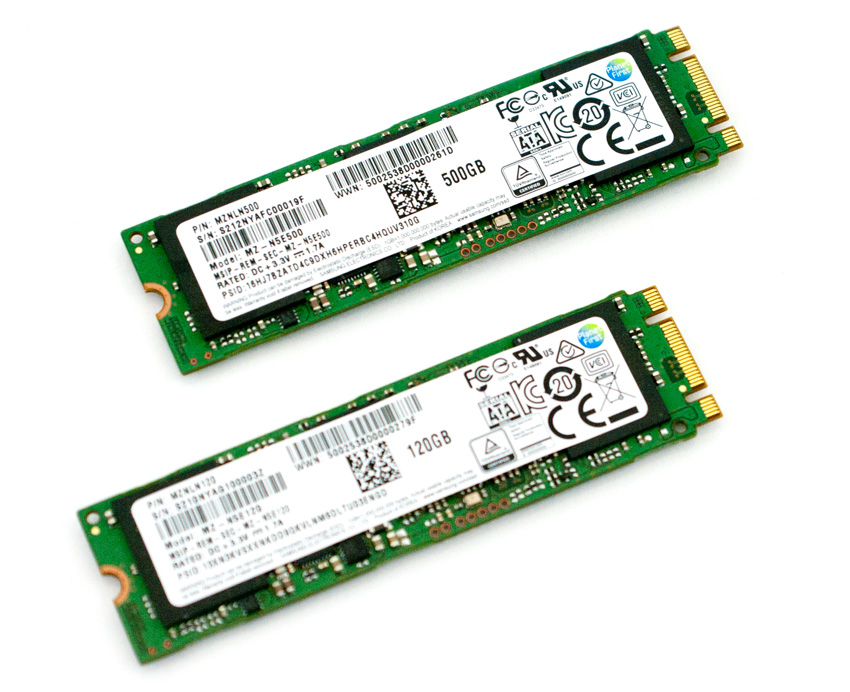 As is the case with the other Samsung 850 EVO models, the M.2 version features power-saving functionality, enabling users to use their device longer and more efficiently. Samsung indicates that the 850 EVO M.2 saves upwards of 30% more on power compared to 840 EVO during write operations due to the company’s use of the new 3D V-NAND, translating to roughly half the power of Planar 2D NAND. In addition, the 850 EVO M.2 includes a Device Sleep mode, which operates at 2mW to extend battery life on laptops.

The Samsung 850 EVO M.2 SSD is significantly smaller and lighter than the traditional 2.5 inch SSDs and less than half the size of a stick of RAM. When compared to the mSATA form factor, though it is a bit larger in length, the M.2 is much smaller in width. Like all devices of this type, the 850 EVO M.2 also does not have a casing, leaving its components exposed.

The front side is branded with a sticker, partially covering two of the NAND chips. The other side has a more detailed sticker, which lists the part number as well as other details about the drive.

The other side is also home to the other two NAND packages. Unlike the mSATA version, all capacities use the Samsung MGX controller.

With the Samsung SSD 850 EVO M.2 SSD, we tested the raw drive only and without RAPID turned on.

When looking at average write latency of the Samsung M.2 drives, the 500GB posted a very impressive average response time and peak latency at 0.0324ms and 0.0358ms respectively. The 120GB model posted a great average response time with 0.0358ms, though it had a much higher peak latency at 31.71ms. This discrepancy also occurred between the two 850 EVO capacities when we looked at the mSATA models. 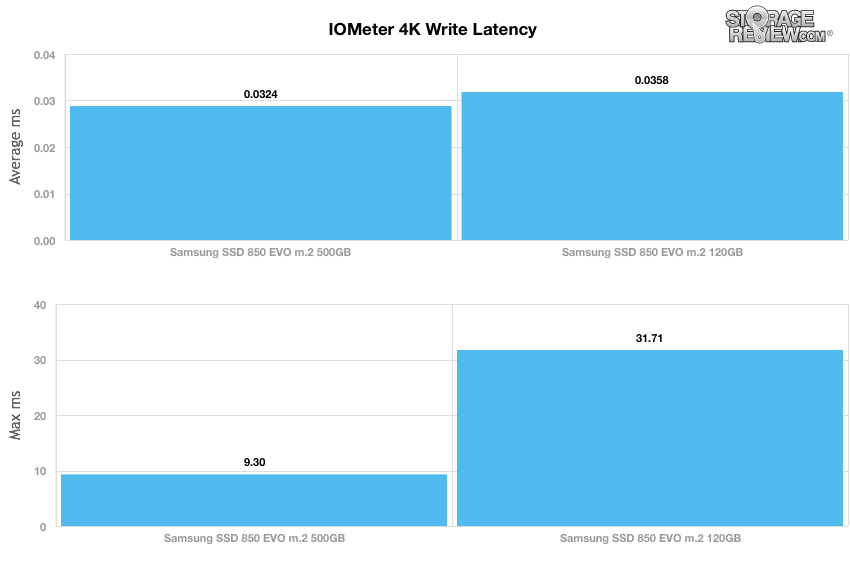 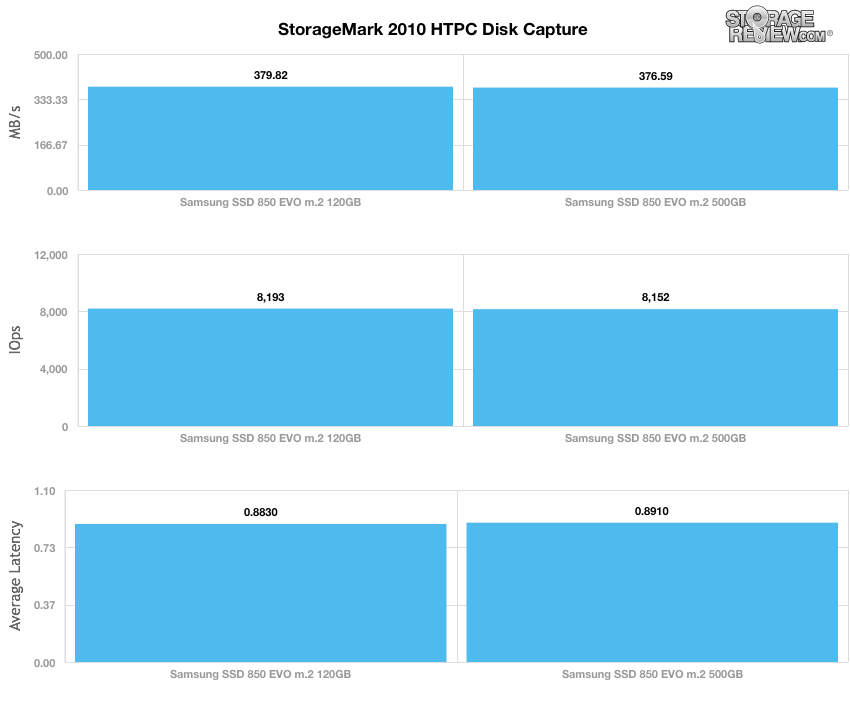 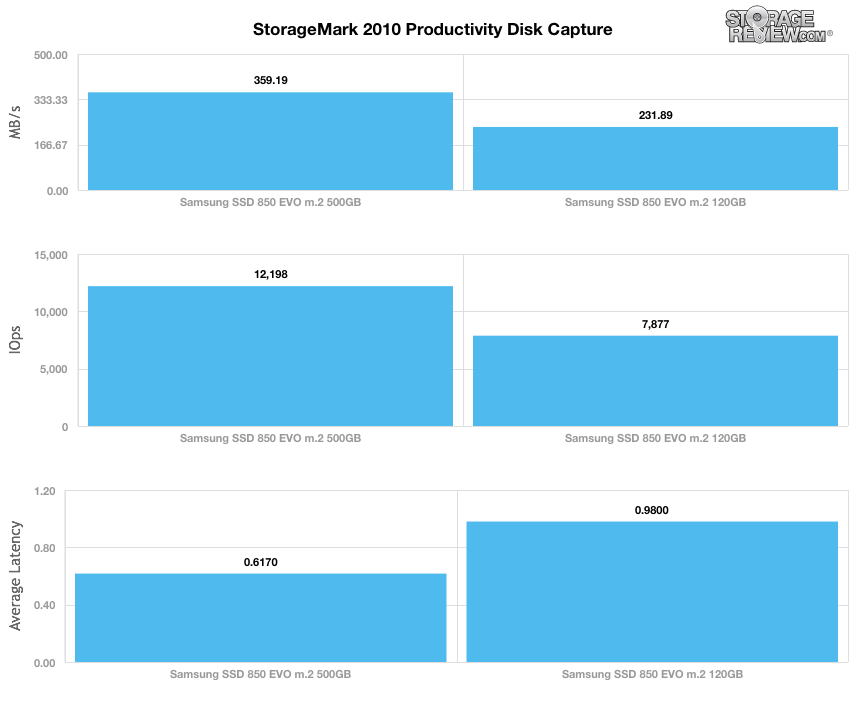 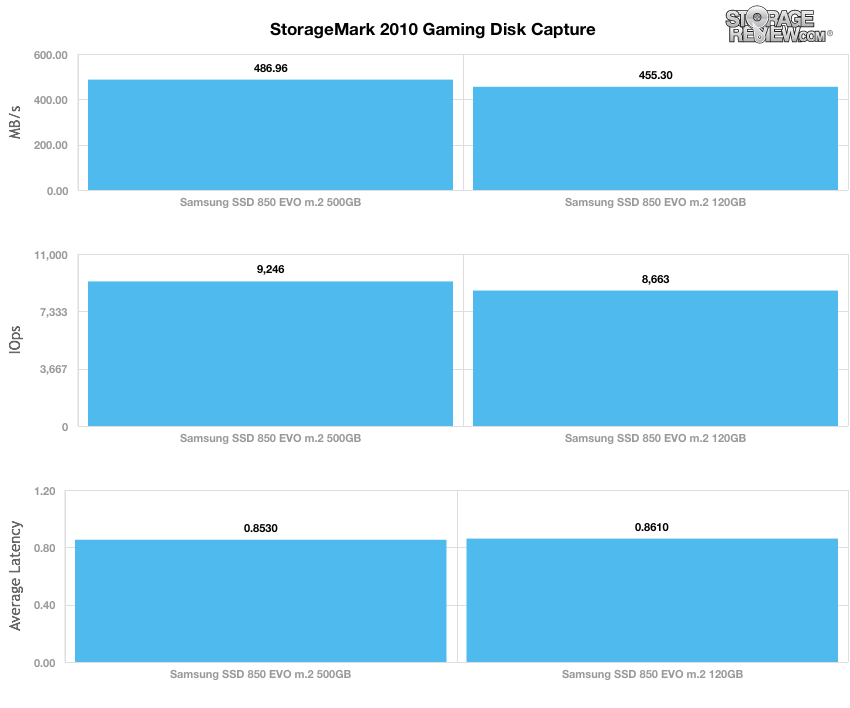 Like its mSATA brethren, the Samsung 850 EVO M.2 is architected for small form factor computing in devices such as tablets and ultrabooks. Though both form factors are considered companion products to 2.5″ 850 EVO line and both come equipped with Samsung’s advanced 3D V-NAND, the newer M.2 technology holds a few advantages over the mSATA form factor due to its versatility, allowance for different module widths and lengths, and more advanced features. It is these advantages that have given favor to the M.2. over the mSATA over the past few years. That being said, its equipped 3D V-NAND technology allows the Samsung 850 EVO M.2 to get the most out of its computing performance as well as the ability to maximize reliability. The 850 EVO M.2 also features Device Sleep functionality so that it can operate in an idle state at a very power efficient 2mW, which allows it to maximize battery life. This is vital to the M.2’s overall value, as this drive will likely reside in a mobile computing devices where system uptime usually depends the availability of power.

When looking at its performance, it comes as no surprise that this little device showed us some pretty impressive numbers in many of our categories based on what we saw with the previous 850 EVO form factors. This impressive performance was underlined by its showing in our smaller file consumer synthetic workloads. In our 4k random transfers, the Samsung EVO M.2 measured 10,963.82 IOPS for read activity and 30,611.92 IOPS for write activity (which were better results than the mSATA) while the 120GB model also recorded very respectable numbers with a read IOPS of 9,957.16 and a write IOPS of 27,702.19. As we mentioned in our previous reviews, however, the 840 EVO outperformed the M.2 850 EVO during the 2MB random and sequential benchmarks by a clear margin. In addition, the performance of the M.2 model clearly struggled during our consumer real-world benchmarks with consistently sub-par results that were sometimes significantly lower than its mSATA brethren.

When it comes down to it, selection is still very limited when it comes to the M.2 form factor, so it’s a fairly big deal to have a quality and modern option available to consumers with ultra-thin computing devices. As is the case with the mSATA model, it also allows certain specialized products that require embedded storage to have a high-performing 500GB drive residing in it. In addition, though the Samsung 850 EVO M.2 did lack a bit of punch in several of our tested areas, we were otherwise very impressed with the results. Couple this with its low power-consumption, and you have the best available drive of its class, further demonstrating Samsung’s dominance in all areas of the SSD industry.

With the release of with the 850 EVO M.2, Samsung has made yet another strong addition to its extensive SSD portfolio, which offers 500GB of capacity, great power efficiency, and impressive overall performance; all in a tiny form factor.

In The Lab: AXIS Security Cameras