The Samsung 850 EVO mSATA is pretty much identical to the previously reviewed 2.5 inch 850 EVO, which proved to be an impressive SSD by offering bar-setting performance and fantastic endurance coupled with a competitive price point. As such, the mSATA version of Samsung’s newest SSD line features the same 3D V-NAND technology, enabling it to boast twice the endurance of a conventional 2D planar type NAND flash, and is designed to maximize everyday computing with an obvious focus on performance and reliability. The mSATA model is built for small form factor computing, embedded applications, and provides users with upgrading capability for ultra-thin PCs and desktops using an mSATA slot.

The Samsung 850 EVO mSATA is pretty much identical to the previously reviewed 2.5 inch 850 EVO, which proved to be an impressive SSD by offering bar-setting performance and fantastic endurance coupled with a competitive price point. As such, the mSATA version of Samsung’s newest SSD line features the same 3D V-NAND technology, enabling it to boast twice the endurance of a conventional 2D planar type NAND flash, and is designed to maximize everyday computing with an obvious focus on performance and reliability. The mSATA model is built for small form factor computing, embedded applications, and provides users with upgrading capability for ultra-thin PCs and desktops using an mSATA slot. 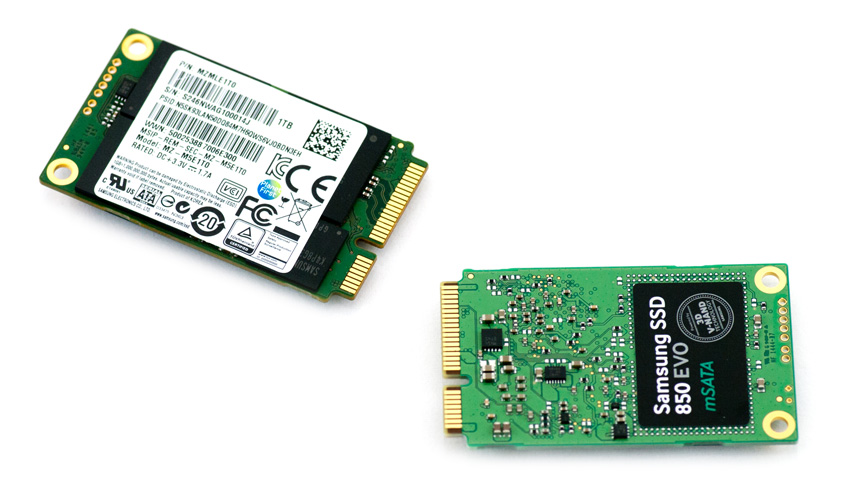 Like all of its form factors, the mSATA 850 EVO is equipped with some very useful power-saving features, including its Device Sleep functionality with a highly efficient 2mW. This feature fits particularly well with the mSATA form factor, as it will be predominantly residing in mobile computing systems where battery longevity is very important.

The Samsung 850 EVO mSATA SSD is much smaller and lighter than a 2.5 inch SSD and even smaller than a credit card. Like all mSATA devices, they do not have a casing, and as a result, all components are exposed. 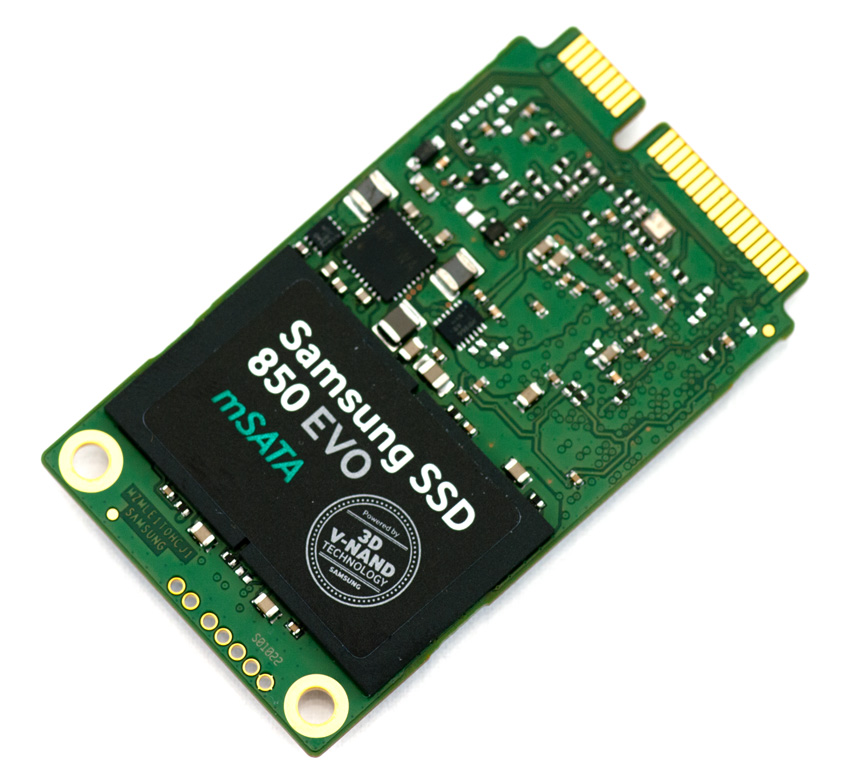 One of the sides has a branded sticker, which covers two of the NAND chips, while other side has a more detailed sticker listing part number and other details about the drive. 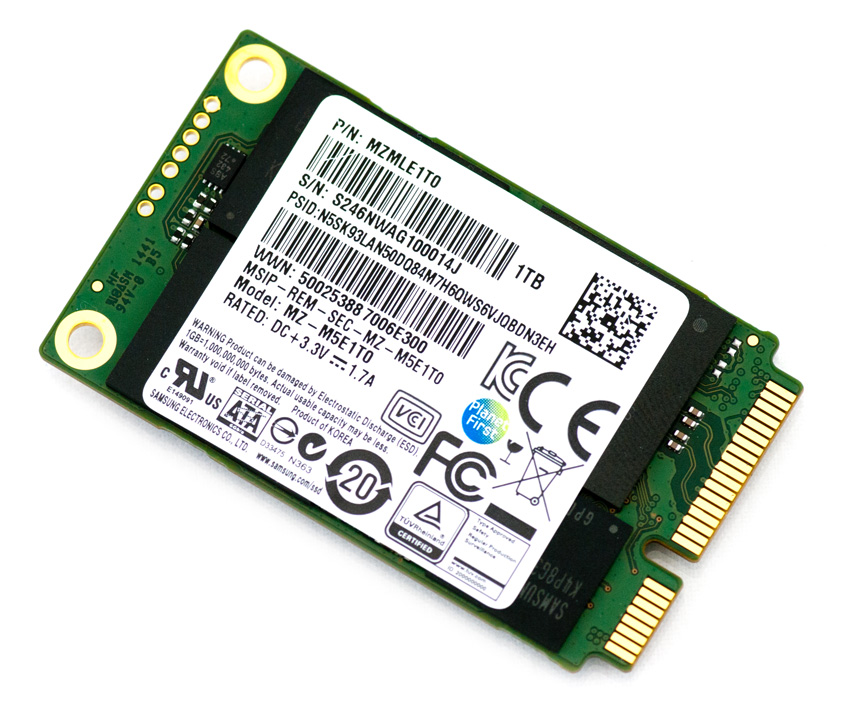 All consumer SSD benchmarks are conducted with the StorageReview HP Z620 Consumer Testing Platform. With the Samsung SSD 850 EVO mSATA SSD, we tested the raw drive only and without RAPID turned on.

In our first test, which measures 2MB sequential performance, the Samsung 850 EVO mSATA (1TB) posted 490.07MB/s read and 448.34MB/s write. While 120GB model had virtually the same read speed at 491.02MB/s, it had significantly slower write activity at 226.04MB/s write. Its predecessor, the Samsung SSD 840 EVO mSATA 1TB, had better results in both columns.

Our next test looks at 2MB random transfer performance. In this benchmark, the Samsung 850 EVO mSATA 1TB posted read and write activity that measured 478.31MB/s and 454.69MB/s, while the 120GB model measured 475.75MB/s read with only 163.81MB/s write. The 840 model again showed noticeably better results while the 850 models placed at the bottom of the pack.

When we switched to smaller 4k random transfers, the Samsung 850 EVO mSATA drives picked up in performance. When looking at throughput, the Samsung 850 EVO 1TB measured 9,352.90 IOPS for read activity and 28,478.72 IOPS for write activity, the latter which was the top performer. The 120GB model measured an impressive read IOPS with 9,981.55, which was the top performing drive in the read category.

Next, we measured the Samsung mSATA drives in MB/s. Here, the 120GB drive had the best read performance with 38.99MB/s while the 1TB drive recorded the best write activity with 111.25MB/s. 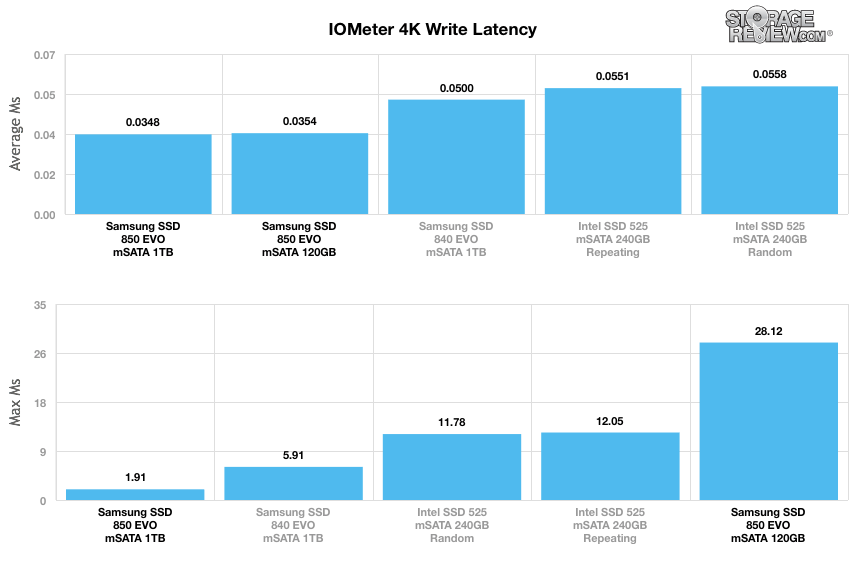 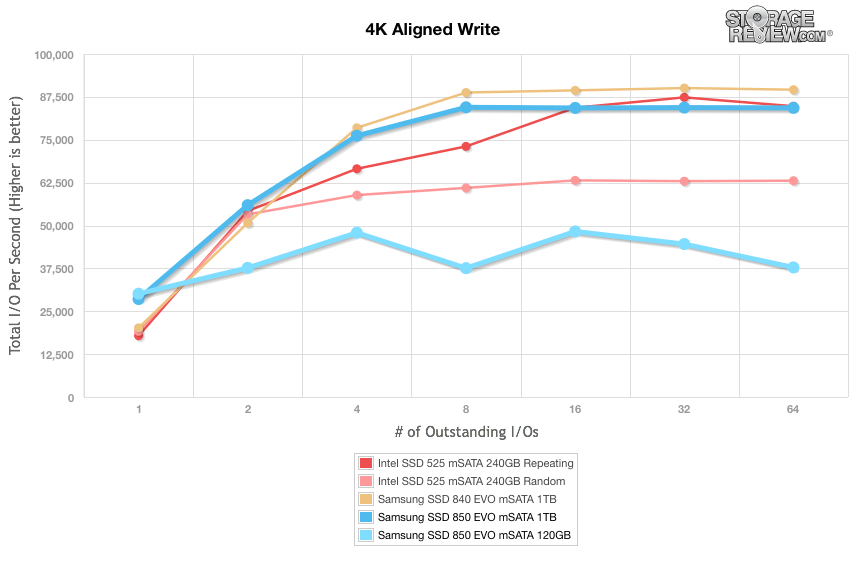 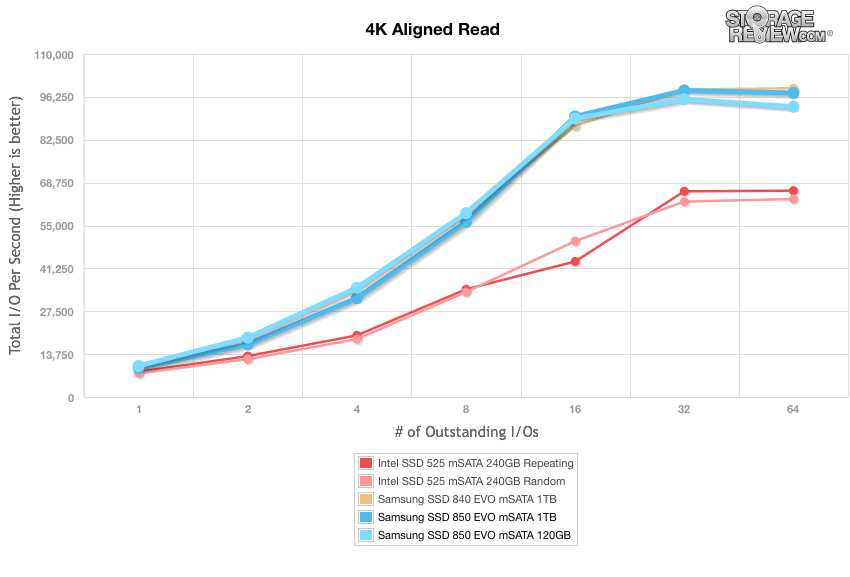 Our last series of synthetic benchmarks compare the hard drives in a series of server mixed-workloads with a queue depth of ranging from 1 to 128. Each of our server profile tests has a strong preference towards read activity, ranging from 67% read with our database profile to 100% read in our web server profile. The Samsung 850 EVO mSATA ranked all across the board during our mixed workloads 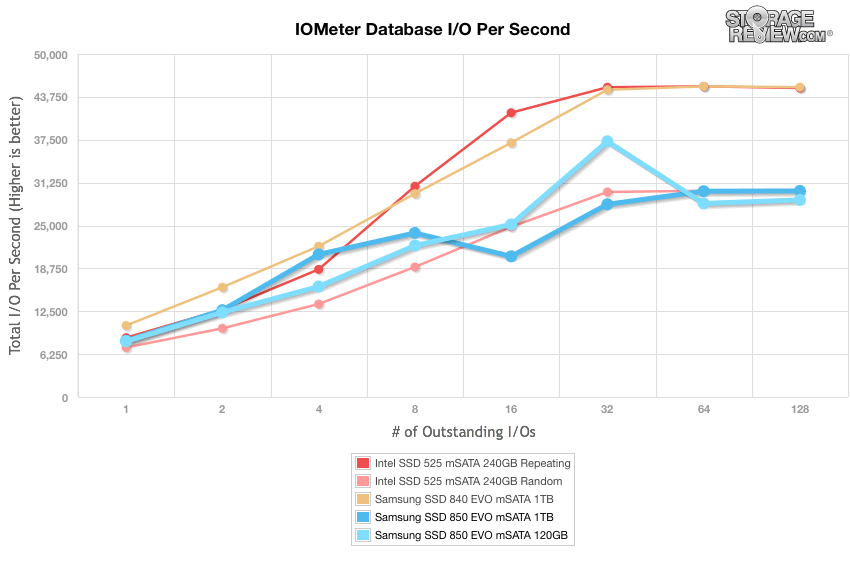 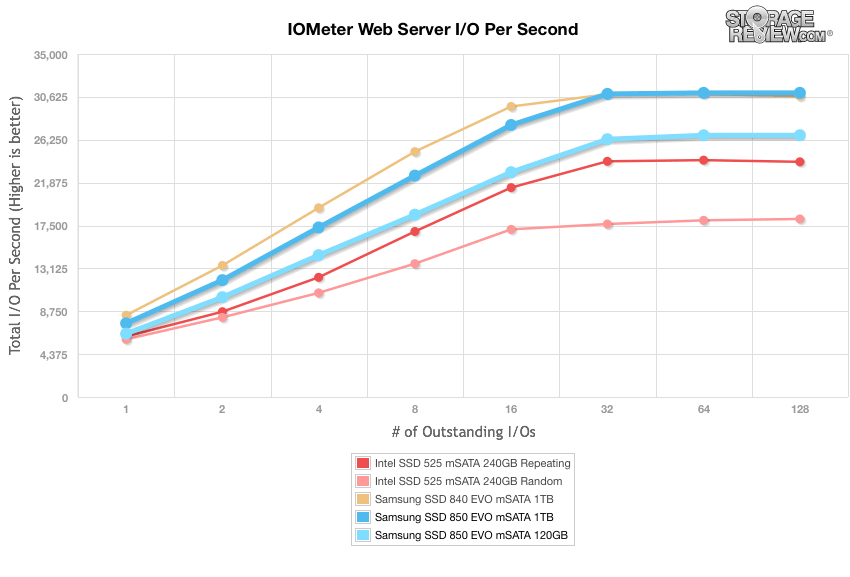 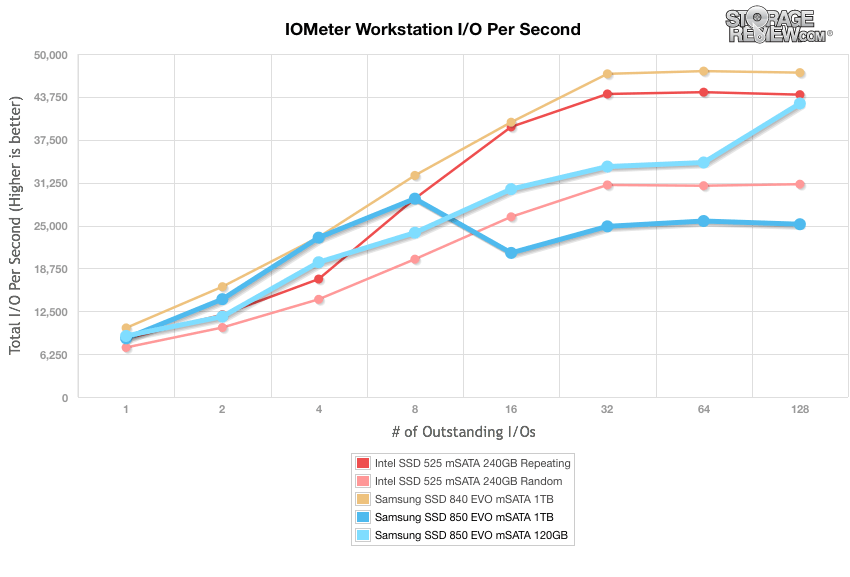 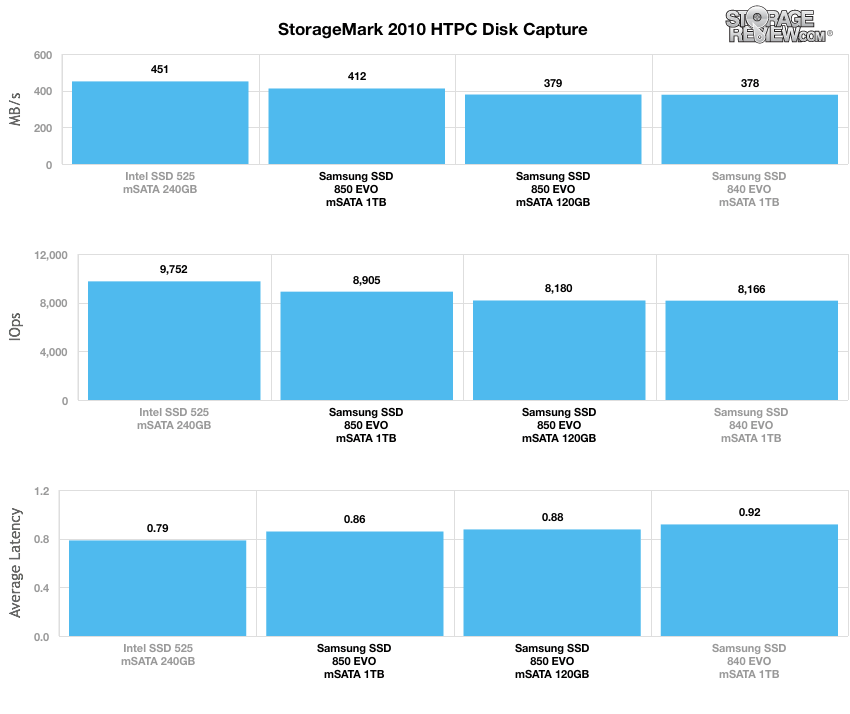 In our Productivity trace, the 1TB Samsung 850 EVO dominated the tested mSATA drives registering 13,594.17 IOPS, 400.43MB/s, and 0.577ms in average latency placing it at the top of the leaderboard by a large margin. Its 120GB brethren had significantly slower results. In our read-intensive Gaming trace, the Samsung 850 EVO drives had very similar results, all of which were impressive. The 840 EVO had nearly identical results as well. 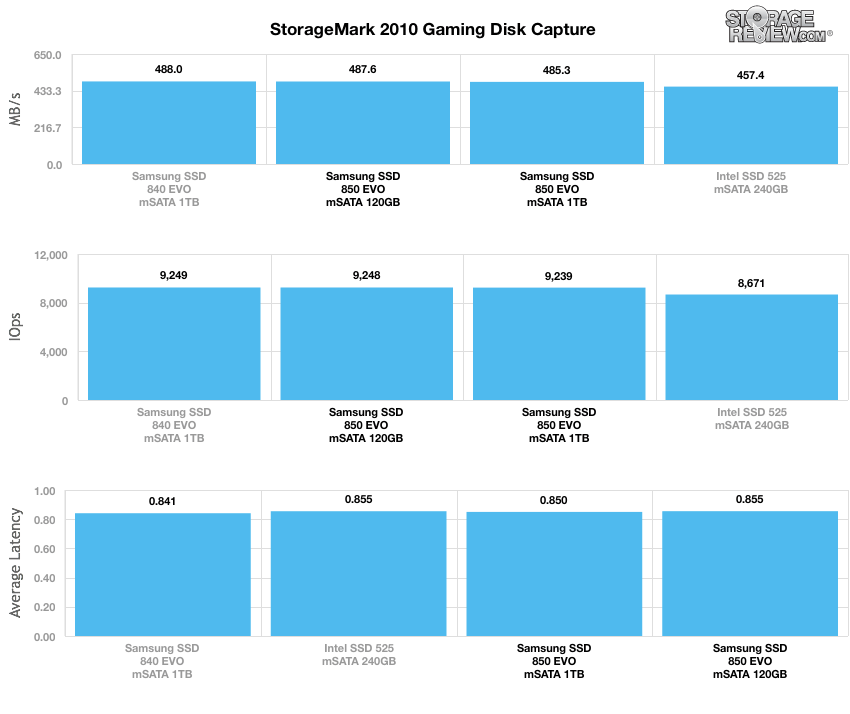 Built for small form factor computing, embedded applications, and ultra-thin PCs and desktops, the Samsung 850 EVO mSATA SSD is a supplement to the 2.5″ 850 EVO line, both of which feature Samsung’s innovative 3D V-NAND technology. This technology allows the tiny drive to maximize its computing performance and focus on reliability. In addition, the 850 EVO mSATA features the Device Sleep functionality, enabling it to operate idly with a highly efficient 2mW. This is a very attractive feature, as maximizing battery life in mobile computing devices is always sought after and this is where the Samsung 850 EVO mSATA form factor will be its primary residence.

From a performance perspective, this little guy packs a form punch, which is highlighted by its solid showing in our smaller file consumer synthetic workloads. In our 4k random transfers, the Samsung EVO mSATA posted 9,352.90 IOPS read activity and 28,478.72 IOPS write, the latter score being the top performer. The 850 EVO mSATA also had the top read activity in the 4k random trace among the tested drives, with the 120GB model posting an impressive 9,981.55 IOPS read. Its predecessor (840 EVO), however, outperformed both 850 capacities in the 2MB random and sequential benchmarks by a noticeable margin.

Our Real-World Benchmarks showed inconsistent results overall. For example, during the HTPC and gaming traces, the 1TB model posted results that placed it in the middle of the pack, while the 120GB model registered numbers at the bottom. However, when looking at the Productivity trace, 1TB mSATA dominated is competition, boasting 13,594.17 IOPS, 400.43MB/s, and 0.577ms in average latency. That being said, its 120GB brethren had significantly slower results. Though its performance was a bit uneven at times, its power ratings were very consistent. Here, we recorded noticeably more efficient consumption when compared to the 840 EVO mSATA, which was headlined by the 120GB model best-of-class results.

Ultimately there are very few options when it comes to unique form factors like mSATA. Samsung has largely done well with the 850 EVO though, making it a good choice in a market segment bereft of opportunity. Those with ultra-thin computers will be thrilled to have a modern mSATA SSD option and specialized devices that need embedded storage can now incorporate a 1TB drive that provides excellent large block sequential throughput without the expense associated with the enterprise counterparts. In total, the 850 EVO strengthens Samsung’s grip on this market with good performance and much improved power consumption.

The 850 EVO strengthens Samsung’s grip on the mSATA SSD market with good performance and even lower power consumption.