Today Samsung has released the latest addition to its 850 EVO SSD line, the 850 EVO SSD 2TB. The 850 EVO SSD line is designed more for everyday computing. Like its PRO counterpart, the EVO use Samsung’s 32-layer 3D V-NAND 2bit MLC/3bit MLC. Unlike the PRO, the EVO is aimed more at mainstream computer users and less at enthusiasts. Samsung states that its 3D V-NAND gives it up to two times the density and write speed performance of other drives. The drive has 2GB of LPDDR2DRAM cache memory, SATA 6Gb/s interface, and comes with a 5-year warranty.

Today Samsung has released the latest addition to its 850 EVO SSD line, the 850 EVO SSD 2TB. The 850 EVO SSD line is designed more for everyday computing. Like its PRO counterpart, the EVO use Samsung’s 32-layer 3D V-NAND 2bit MLC/3bit MLC. Unlike the PRO, the EVO is aimed more at mainstream computer users and less at enthusiasts. Samsung states that its 3D V-NAND gives it up to two times the density and write speed performance of other drives. The drive has 2GB of LPDDR2DRAM cache memory, SATA 6Gb/s interface, and comes with a 5-year warranty. 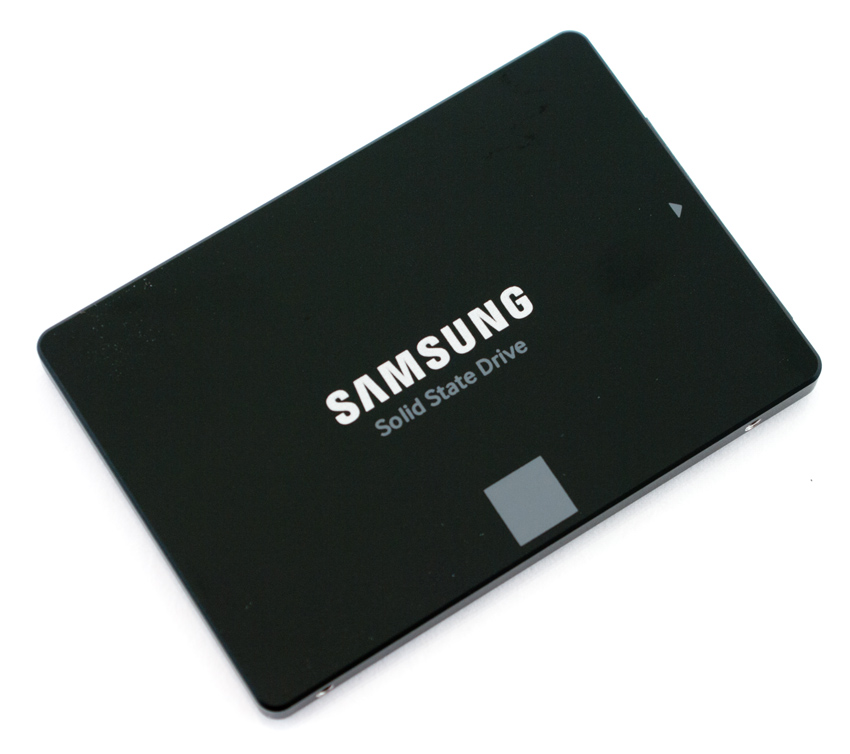 Data is continuing to grow and users are looking for ways to expand their capacities without sacrificing performance. SSDs provide that best performance but all the consumer versions topped out at 1TB, until now. Samsung’s 850 EVO 2TB aims to retain all the great features the line has already shown (great performance, low power consumption, and full disk encryption) plus it now has double the capacity. The 850 EVO has been sitting near the top of our leaderboard for sometime, assuming it can maintain or exceed the performance of the smaller capacity drives.

The Samsung SSD 850 EVO 2TB model looks identical to its smaller capacities with its minimalistic, slim black chassis/light grey font design comprised of a flat black top with Samsung branding and a simple “Solid State Drive” text. It is of 7mm z-Height form factor, allowing it support a variety of applications such as notebooks, desktops, and ultrabooks. 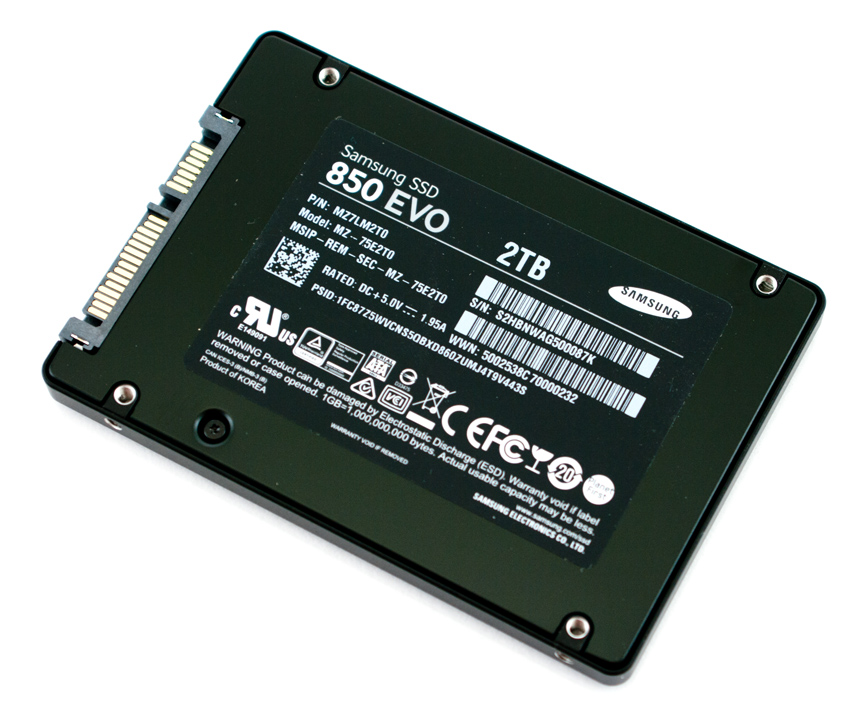 When flipping the drive over shows a sticker with all the key information about the drive. The side profiles are equipped with four screw holes to allow seamless mounting of the 850 EVO. 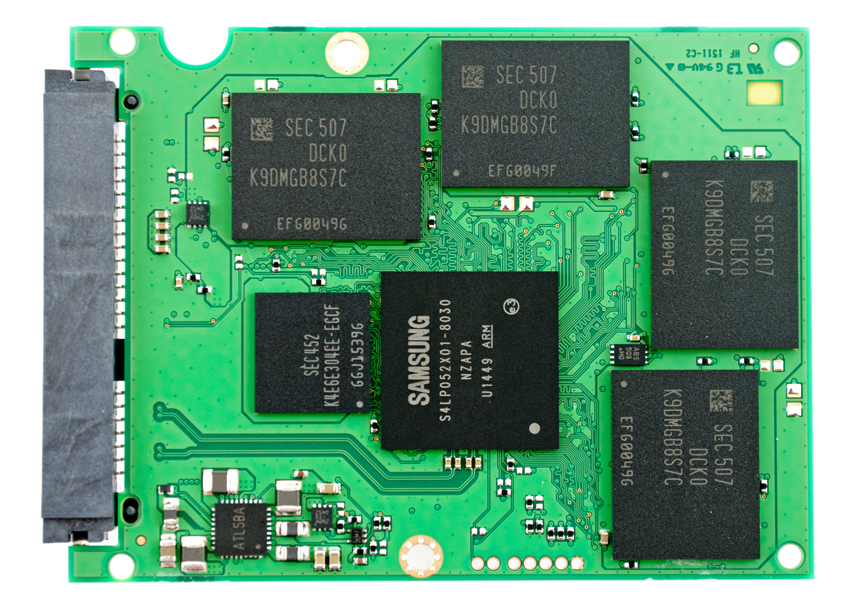 When looking under the hood, you will see the highly vertically integrated components, including the Samsung DRAM, Samsung V-NAND and Samsung SSD controller.  The 2TB model uses the Samsung MHX controller (compared to the 1TB’s Samsung MEX) and supports a SATA 6Gb/s interface, though it is also compatible with SATA 3Gb/s and SATA 1.5Gb/s. Looking further inside the 2TB 850 EVO will show 8x 128GB 32-layer 3D NAND packages and 2GB of LPDDR3 memory. 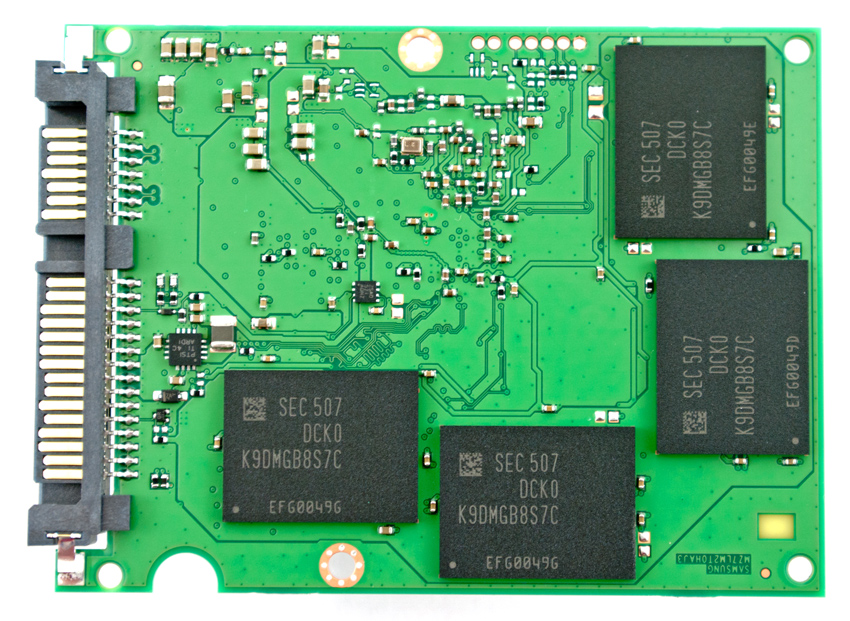 Our first test measures 2MB sequential performance. In this scenario, the 2TB Samsung EVO boasted an impressive 493.54MB/s read and 468.10MB/s write, which placed it just behind the Crucial BX100 in reads at the top of our leaderboards. These results were also slightly better than the 1TB and 250TB models.

Moving to our 2MB random transfer performance tests, the 850 EVO ranked at the top of our leaderboard with read and writes of 483.45MB/s and 467.22MB/s, respectively. The 2TB drive had the best reads, though trailed the Patriot and Neutron drives in the write column. In addition, it also offered a slight gain in performance over the smaller capacity EVO drives.

Our random 4k test pushes hard on the drives when looking at throughput. Here, the 850 EVO a very impressive 10,287.13 IOPS read and 29,748.15 IOPS write, taking the top spot among the leaders and handedly beating out the Crucial, Patriot and Corsair drives. As for the small EVO capacities, though they measured less than the 2TB model, they still remained among the leaders.

Comparing write latency, the 850 EVO posted the best average latency with just 0.0333ms while its maximum readings fell behind (including the 1TB EVO model) with 3.94ms. The top performer here was the Patriot Ignite. 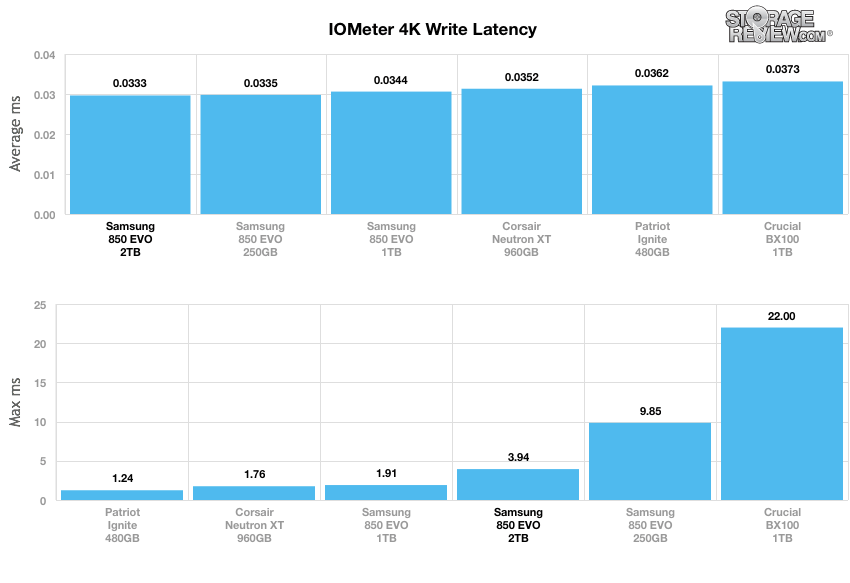 In our next 4K test, we move to a workload with 100% write activity, which scales from 1QD to 64QD.  In the aligned write setting, the 850 EVO posted impressive results, with 29,654.66 IOPS in burst and 84,543.81 IOPS in the terminal. Though it fell behind the Corsair and Patriot drives, the margin between them was almost negligible. The 2TB and 1TB EVOs only had a difference of roughly 100 IOPS in the terminal. 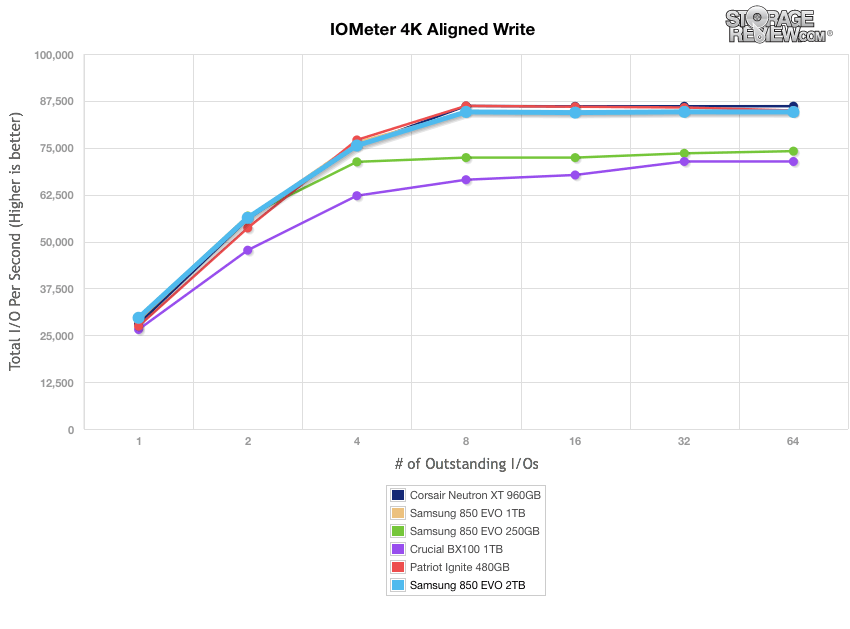 Moving on to our aligned read benchmark, all three Samsung EVO capacities took top honors on the leader board (by a noticeable margin in some cases); however, the small capacities beat out its 2TB brother, who scored 97,534.21 IOPS in the 64QD. 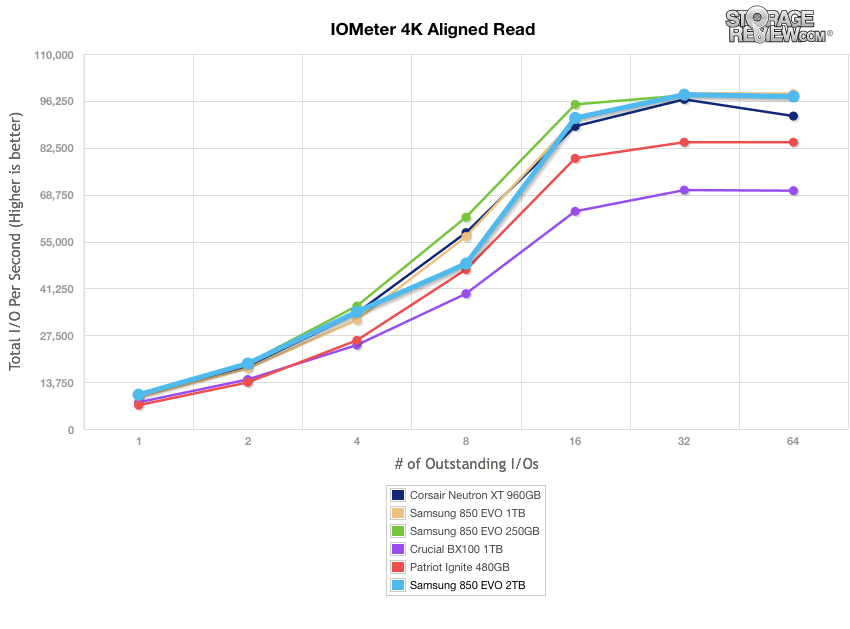 The database profile features a 67% read and 33% write workload focusing on transfers around 8K in size. In this scenario, the 2TB EVO boasted top-in-class results, with an impressive range of 9,405.72 IOPS to 43,203.49 IOPS in the terminal. This was a huge gain in performance over its small capacity brethren and almost 6,000 IOPS better than the 2nd place Crucial drive. 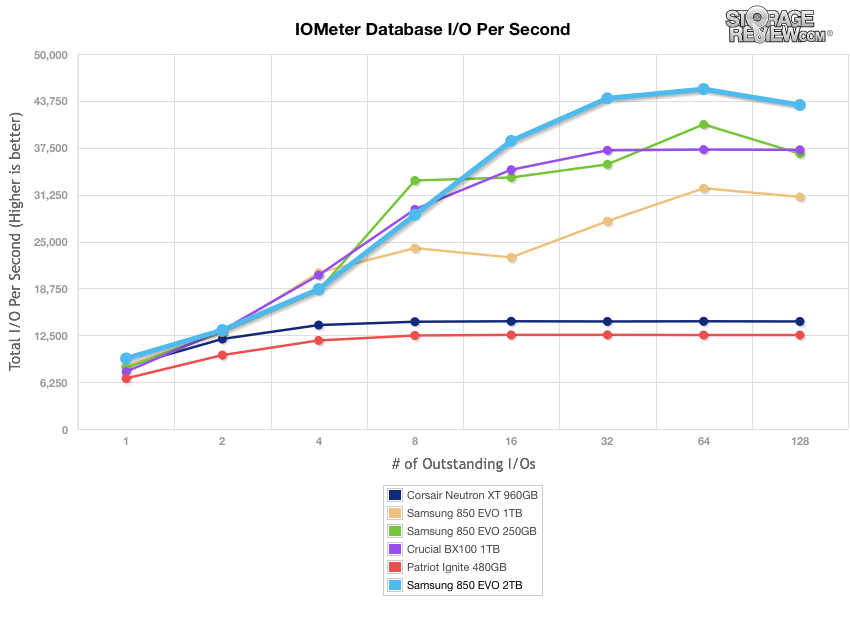 Our next benchmark is the web server profile is read-only with transfer sizes ranging from 512B to 512KB. Here, the 2TB EVO performed very well, with 30,325.97 IOPS by the end of the test; however, the 1TB model posted slightly better results with 31,259.11 IOPS in the terminal. 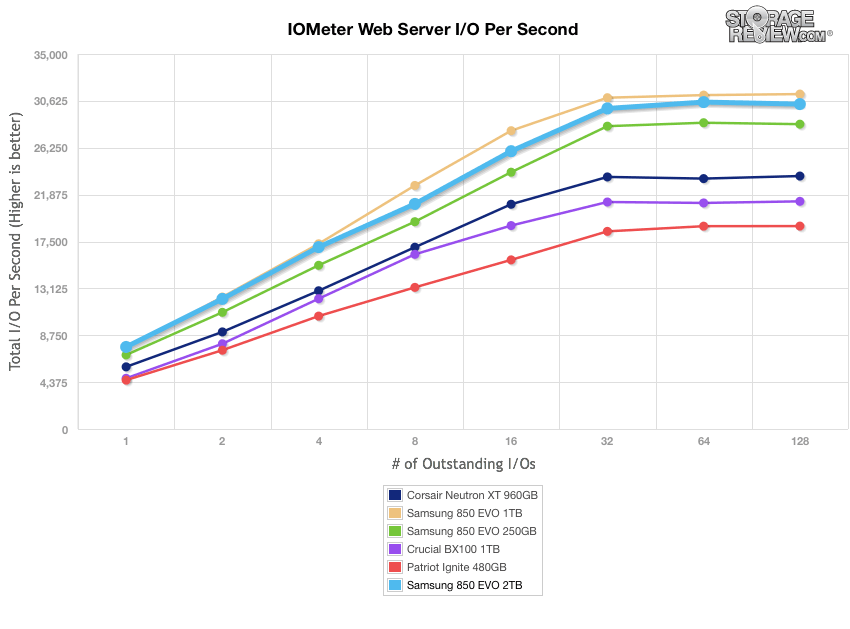 The file server profile has 80% read and 20% write workload spread out over multiple transfer sizes ranging from 512-byte to 64KB. The 2TB EVO again recorded class-leading results, with a whopping 39,343.42 IOPS at QD64 (9,405.71 IOPS in burst) easily taking first place among the other consumer drives (7.000 IOPS over the 2nd place 250GB EVO). The 1TB model was neck-and-neck with its 2TB brother; however, it took a huge dip in performance at the 32nd queue depth. 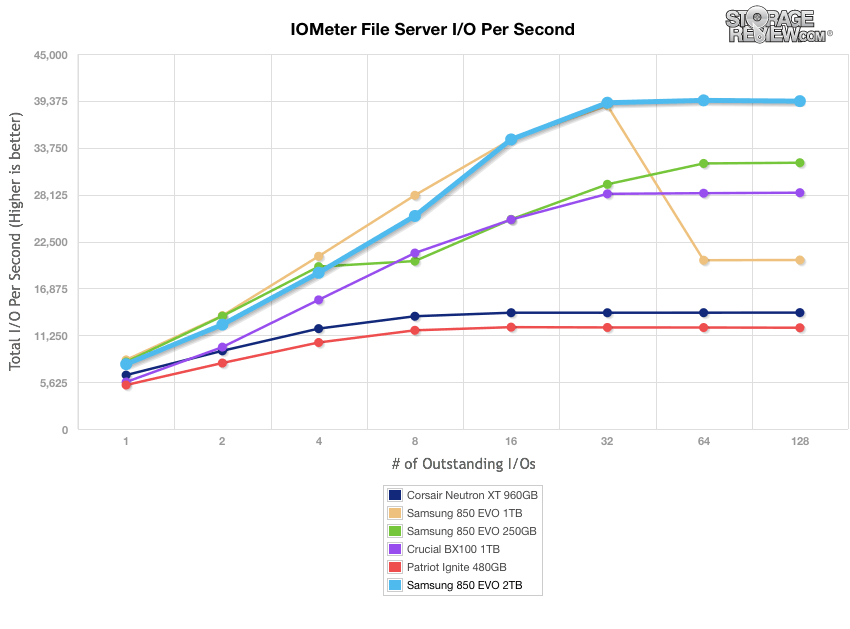 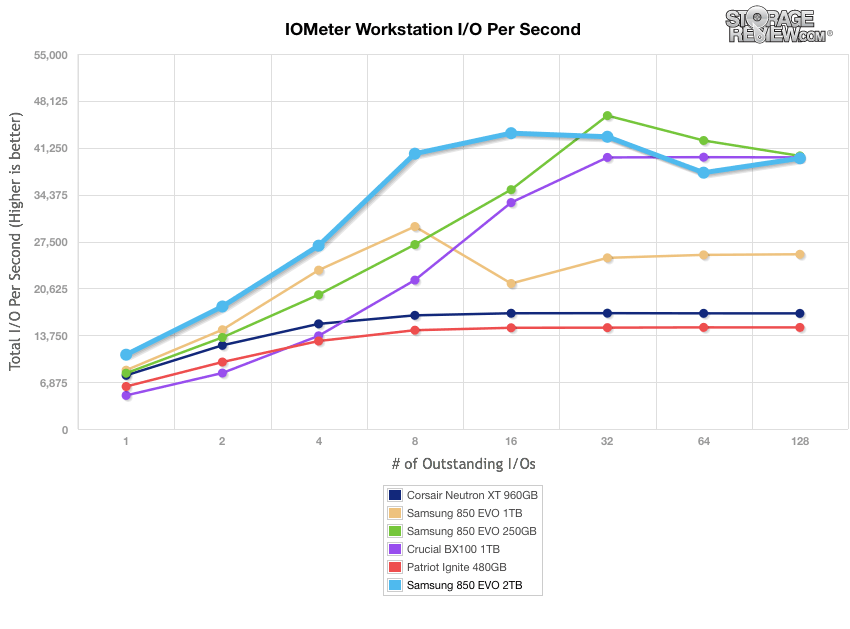 While the results of synthetic benchmarks are important to identify the key strengths and weaknesses of a drive, performance in these tests does not always translate directly into real-world situations. To get a better idea how the 2TB Samsung SSD 850 EVO will handle itself in the field we will chart StorageMark 2010 HTPC, Productivity, and Gaming traces against comparable drives. Higher IOPS and MB/s rates with lower latency times are preferred. 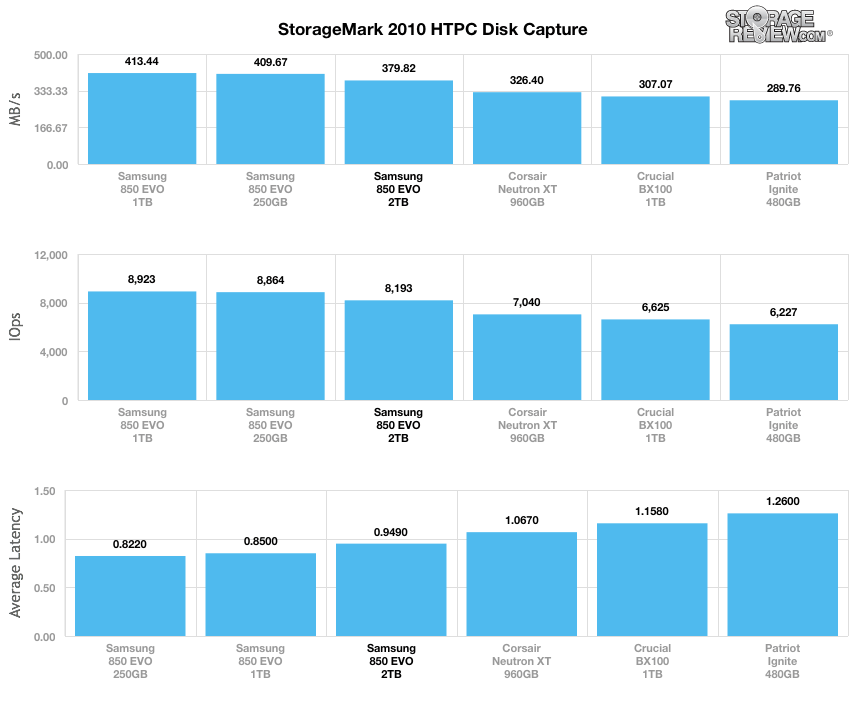 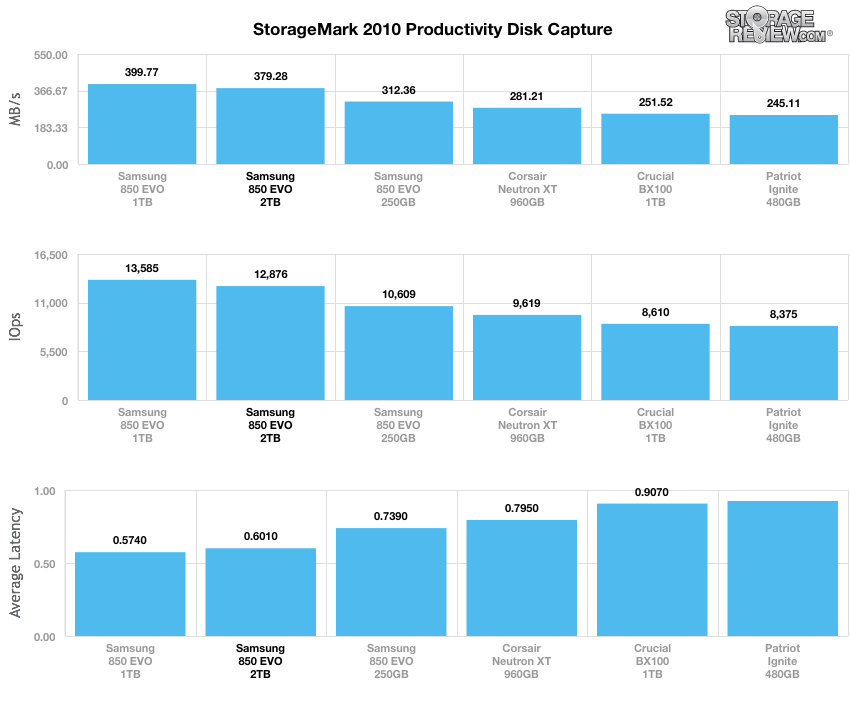 In this gaming profile, the 2TB EVO sustained its performance from the last test, though it still couldn’t surpass its lesser capacity brothers; however, the difference in performance was negligible. 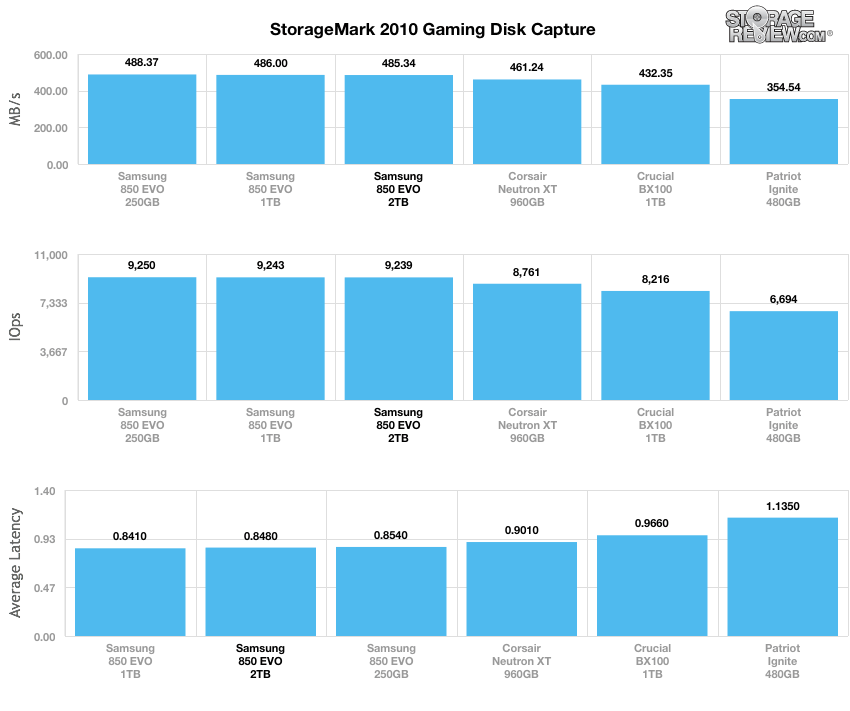 The Samsung 850 EVO is a 2.5” SSD with the highest capacity currently available on the commercial market at 2TB. The current capacity doubles the previous maximum from the 850 EVO line, which as stayed near the top of our leaderboard since it was first introduced. The drive claims pretty impressive performance in part thanks to its TurboWrite technology, not to mention low power consumption, and advanced encryption functions. The drive has a SATA 6Gb/s interface and comes with a 5-year warranty.

Looking at performance, the 2TB Samsung 850 EVO posted both best-in-class, bar-setting numbers and results that were less than that of its smaller capacities brothers. As such, the 2TB model showed off its muscle during our synthetic tests, posting an impressive 493.53MB/s read and 468.10MB/s write in our 2MB sequential transfers while random performance of the same file size showed read and writes of 483.45MB/s and 467.22MB/s, respectively. These results placed the 2TB EVO at the top of the leaderboard and offered a slight gain in performance over the 250GB and 1TB EVO drives. When we moved on to our series of mixed server workloads, the Samsung 850 EVO 2TB SSD boasted bar-setting performance, which was highlighted by the database and file server profiles. Here, it posted huge gains over the smaller capacities, easily taking top spot by a significant margin. Our real-world consumer tests, however, slowed down the 2TB EVO as it was outshone by the 1TB and 250GB models in all three of our tests. Though there was only a small margin between the results of the 2TB and 1TB/250GB capacities, it would have been nice to see the larger model come out on top.

That being said, 2TB model is a very impressive release by Samsung. With the release of the highest capacity consumer SSD, in addition to the bar-setting performance, they have certainly reaffirmed that they are arguably the market leaders of consumer-grade flash technology.

The Samsung 850 EVO 2TB drive is a fantastic addition to the company’s line of consumer SSDs, offering the best of both worlds: market leading capacity and best-of-class performance.