The Samsung 960 PRO M.2 SSD is the newest addition to the company’s portfolio of high-performing solid-state drives. Whether it’s a flash drive or an enterprise SSD, we always know what we are getting when Samsung releases a new storage product: quality components, good performance, and competitive pricing. So it’s always exciting to see a new drive hit the market. In this case, the Samsung 960 Pro is the successor of the 950 Pro, a drive that offered users a way to significantly upgrade their notebooks and workstations, coupled with enterprise-grade reliability features. The 960 offers more of the same, but is improved in virtually every way.

The Samsung 960 PRO M.2 SSD is the newest addition to the company’s portfolio of high-performing solid-state drives. Whether it’s a flash drive or an enterprise SSD, we always know what we are getting when Samsung releases a new storage product: quality components, good performance, and competitive pricing. So it’s always exciting to see a new drive hit the market. In this case, the Samsung 960 Pro is the successor of the 950 Pro, a drive that offered users a way to significantly upgrade their notebooks and workstations, coupled with enterprise-grade reliability features. The 960 offers more of the same, but is improved in virtually every way.

Specifically designed for professionals and enthusiasts, the Samsung 960 Pro is an M.2 form factor and focuses on both next-generation performance and endurance. It leverages the PCIe Gen. 3.0 x 4 lane interface NVMe 1.2 protocol and comes equipped with the company’s 3rd generation of V-NAND, along with its newly developed Polaris controller. Samsung also quotes their new M.2 drive as having 3,500MB/s in sequential read performance and 2,100MB/s in sequential writes, while random read and write operations are said to reach 440,000IOPS and 360,000IOPS, respectively

The Samsung 960 Pro is also touted as the market’s first client PC SSD using the standard 2280 m.2 form factor in a massive 2TB capacity. Samsung also offers the options of 1TB and 512GB models. Consistent with the company’s pedigree in reliability, the 960 SSD has high endurance levels up to 1.2 PB in TBW as well as a generous 5-year warranty. The company claims that its sustained performance levels are double that of its predecessor, the 950 Pro.

The Samsung 960 Pro uses a similar design to its predecessor, which uses mostly a black color scheme (including the PCB) and measures in at just 80.15mm x 22.15mm. The parts of the M.2 drive are exposed, so users should be cautious when handling the Samsung 960 Pro, as components could be harmed.

All consumer SSD benchmarks are conducted with the StorageReview HP Z640 Workstation. We compared the Samsung 960 Pro SSD to the following drives:

Our random 4K benchmark puts more strain on the drives in terms of throughput. Here, the 2TB Samsung 960 Pro fell to fourth place with 34.30MB/s read and 150.83MB/s write. The top performing drive was the Samsung 950 Pro.

In terms of our 4K write latency benchmark, the Samsung 960 Pro showed some very good numbers with 0.02545ms and 0.1857ms in average and maximum latency, respectively. 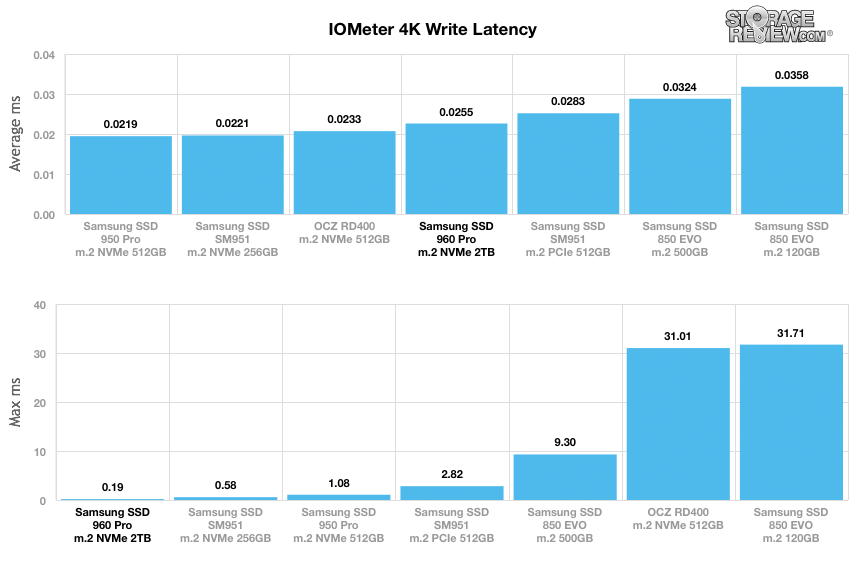 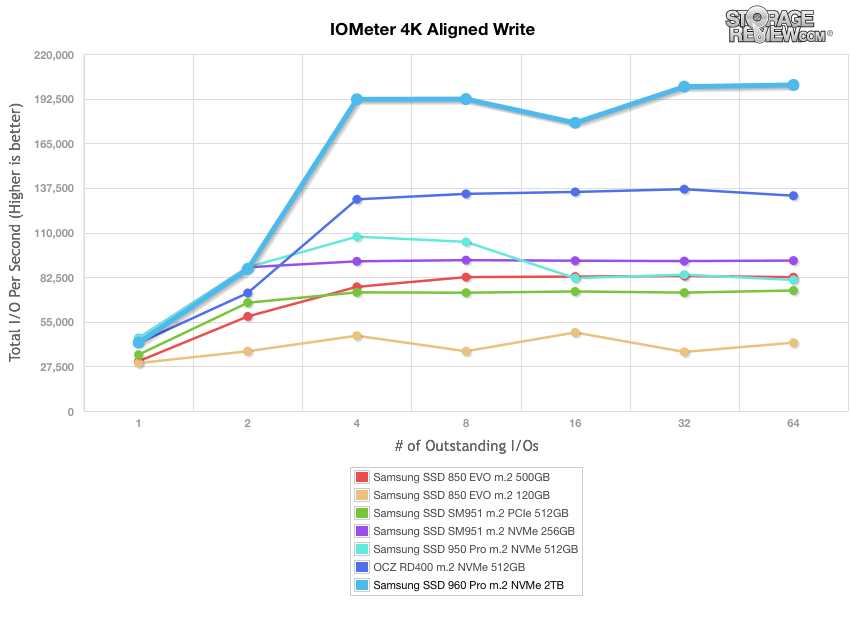 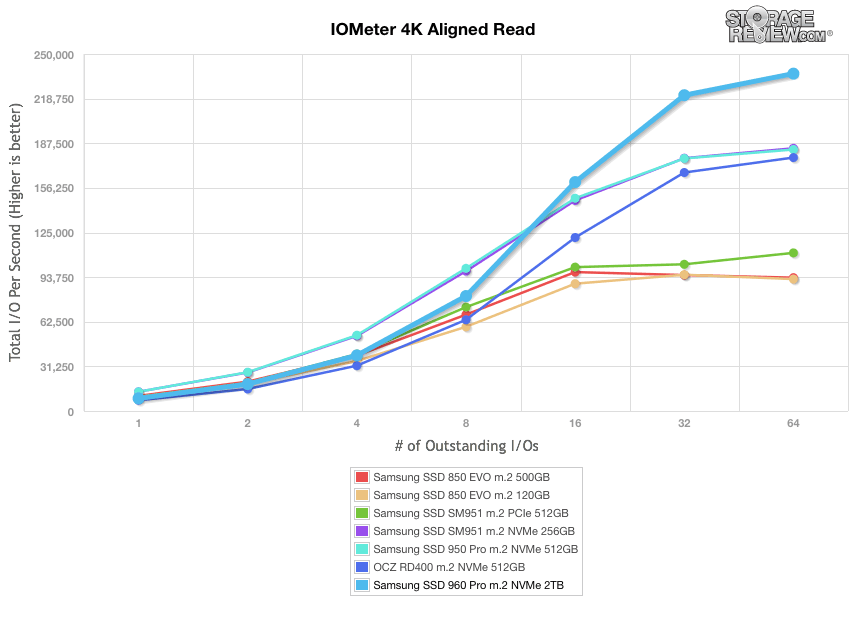 The database profile features a 67% read and 33% write workload, focusing on transfers around 8K in size. Here, the Samsung 960 Pro continued its impressive performance with a range of 8,966.03 IOPS to 154,105.38 IOPS, placing it well at the top of the leaderboard. 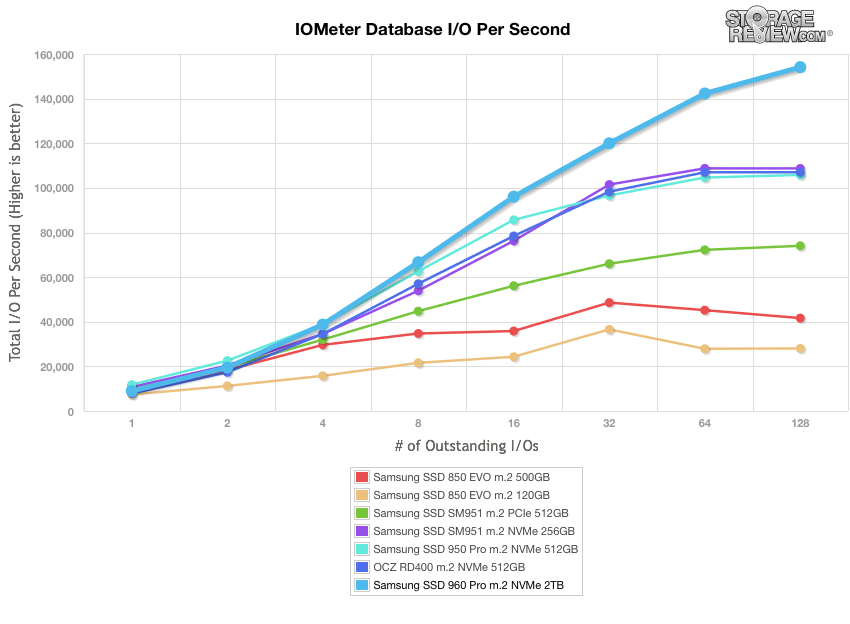 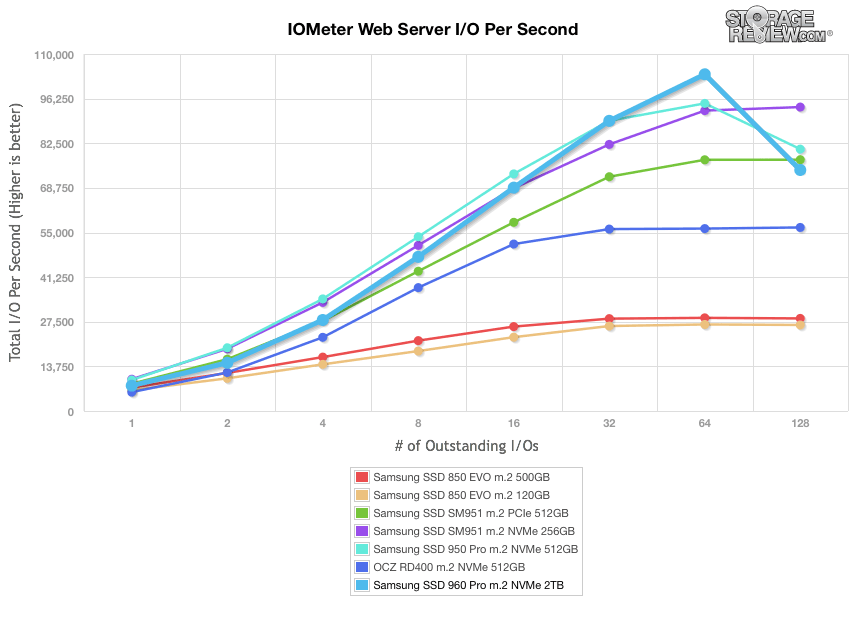 During the file-server profile, which has 80% read and 20% write workload spread out over multiple transfer sizes ranging from 512-bytes to 64KB, the Samsung 960 Pro found itself back at the top of the leaderboard. The high-capacity Samsung SSD posted a range of 8,704.56 IOPS through 128,743.64 IOPS. 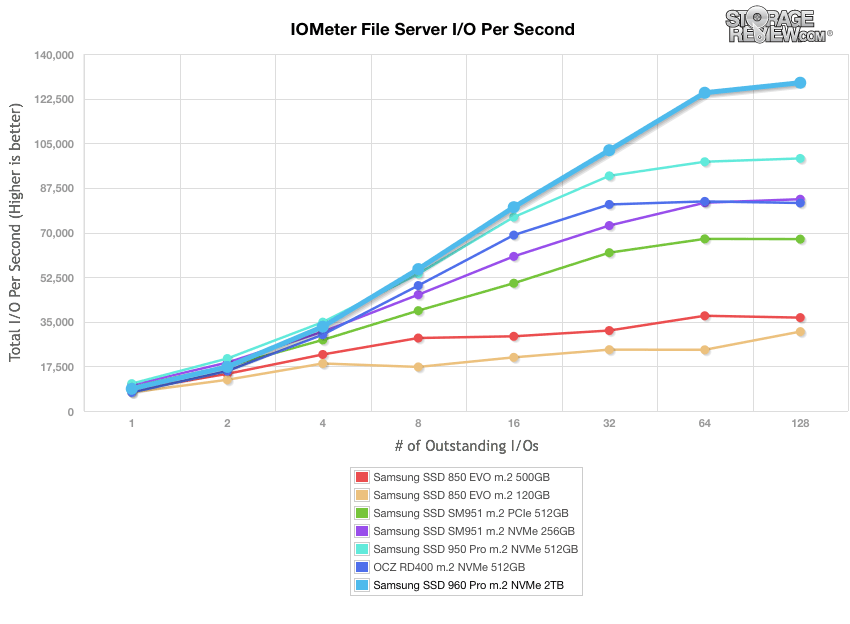 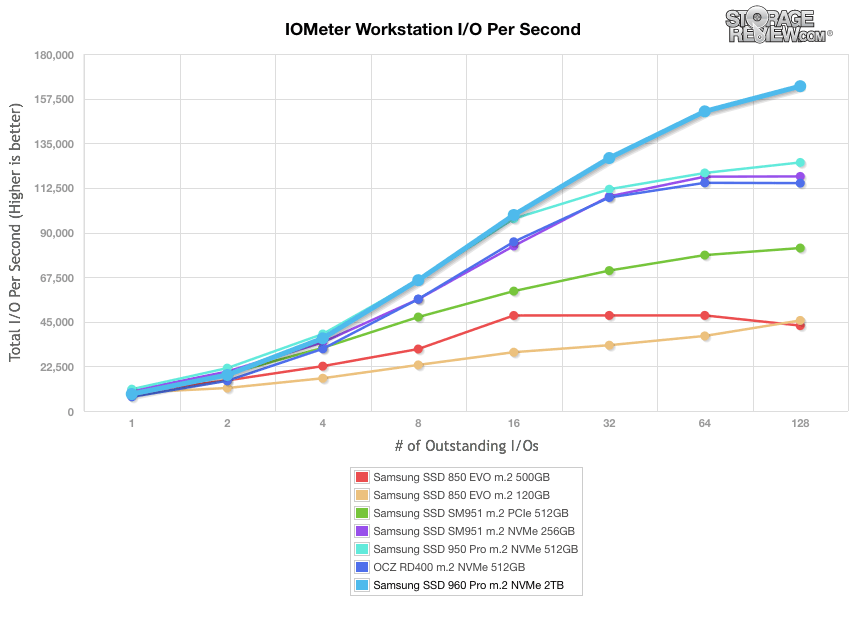 While the results of synthetic benchmarks are important in identifying the key strengths and weaknesses of a drive, performance in these tests does not always translate directly into real-world situations. To get a better idea how the high-capacity Samsung 960 Pro drive will handle itself in the field, we will chart StorageMark 2010 HTPC, Productivity, and Gaming traces against comparable drives. Higher IOPS and MB/s rates with lower latency times are preferred. 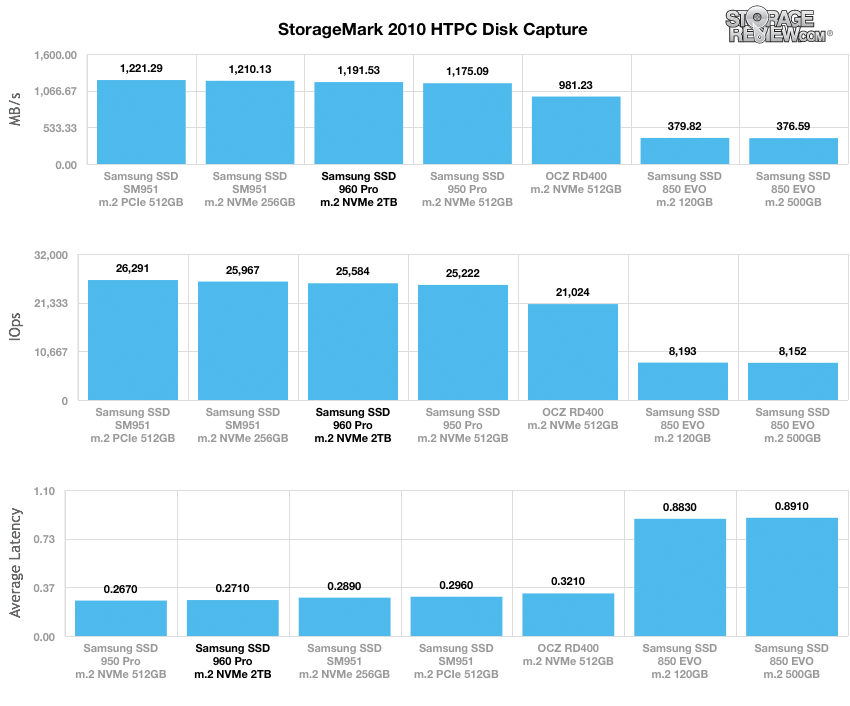 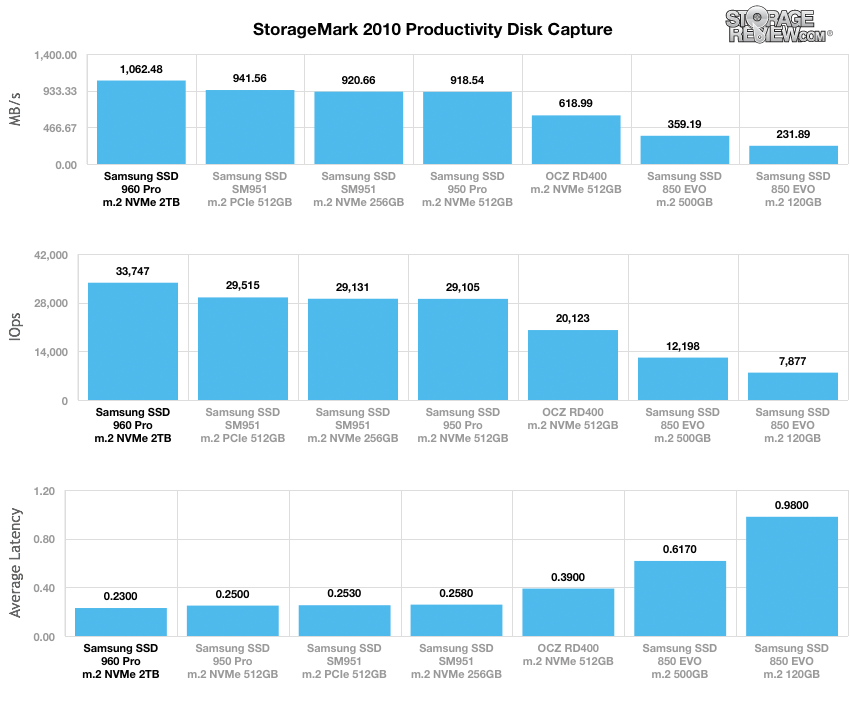 In our gaming benchmark, results were much of the same. However, the Samsung 960 Pro showed an even larger lead among the other drives, posting an impressive 37,928 IOPS, 1845.72MB/s, and 0.187ms in average latency. 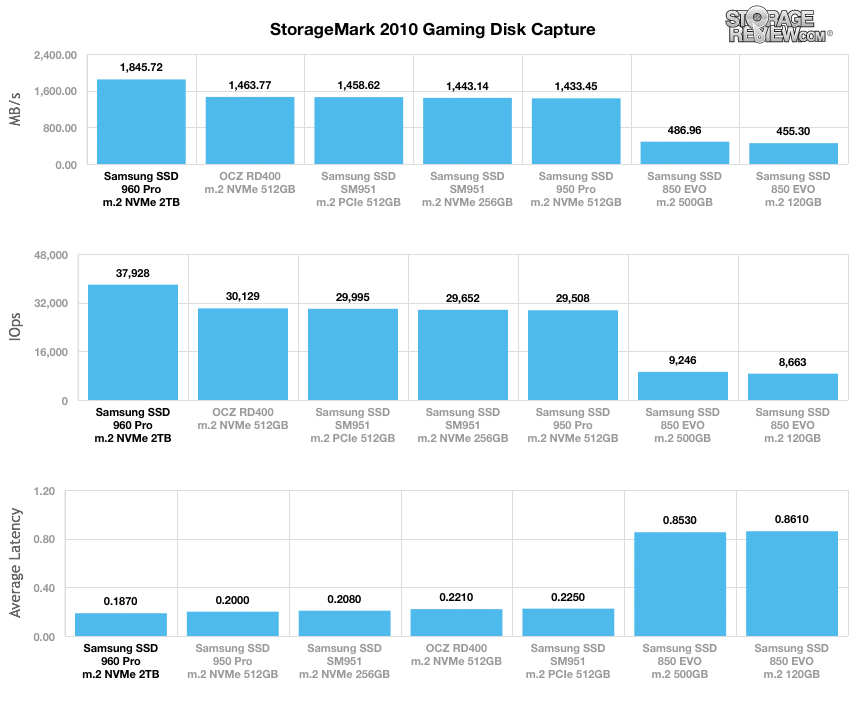 The Samsung 960 Pro is certainly an impressive drive and significant step up from its predecessor, the 950 Pro. Leveraging PCIe Gen. 3.0 via the NVMe 1.2 protocol, the company’s 3rd generation of V-NAND and a new Polaris controller, the Samsung 960 Pro offers fantastic performance and enhanced reliability. It also features long-term dependable performance due to minimized performance degradation, doubling that of the 950 PRO. As a result, users will be able to use the drive for heavy daily workloads for a good amount of time.

Samsung continues to set a high bar with its storage products. The company has released the highest capacity M.2 drive for consumers, for the second year in a row (last year they were the first to release a 1TB M.2 and this year they are the first to release a 2TB M.2 for consumers). On top of that, the drive has record setting sequential performance, the highest we’ve yet to test on the consumer side. The 960 PRO’s form factor is ideal for where the market is heading. The only real downside to the drive, is the same downside to all new technology, early adopters will pay the price penalty, with the 2TB MRSP of $1,299.

The Samsung 960 Pro is the highest capacity M.2 drive on the market with recording setting performance, all within a tiny form factor.