The Dell Precision Tower 7810 (T7810) is dual-socket tower workstation designed specifically for professionals who are looking for a desktop with some extra power for their graphics- or CPU-intensive workloads. Previously, we looked at the last generation of the T7810, which we found to be both flexible and performance-driven. For this review, we will be looking at the newly refreshed T7810, as Dell has upgraded its new Intel Broadwell EP Processors with more cores and better performance (specifically for multi-threaded applications). With these upgrades, Dell indicates that the T7810 will be even more effective for professional modeling, analysis, and calculation use cases.

The Dell Precision Tower 7810 (T7810) is dual-socket tower workstation designed specifically for professionals who are looking for a desktop with some extra power for their graphics- or CPU-intensive workloads. Previously, we looked at the last generation of the T7810, which we found to be both flexible and performance-driven. For this review, we will be looking at the newly refreshed T7810, as Dell has upgraded its new Intel Broadwell EP Processors with more cores and better performance (specifically for multi-threaded applications). With these upgrades, Dell indicates that the T7810 will be even more effective for professional modeling, analysis, and calculation use cases. 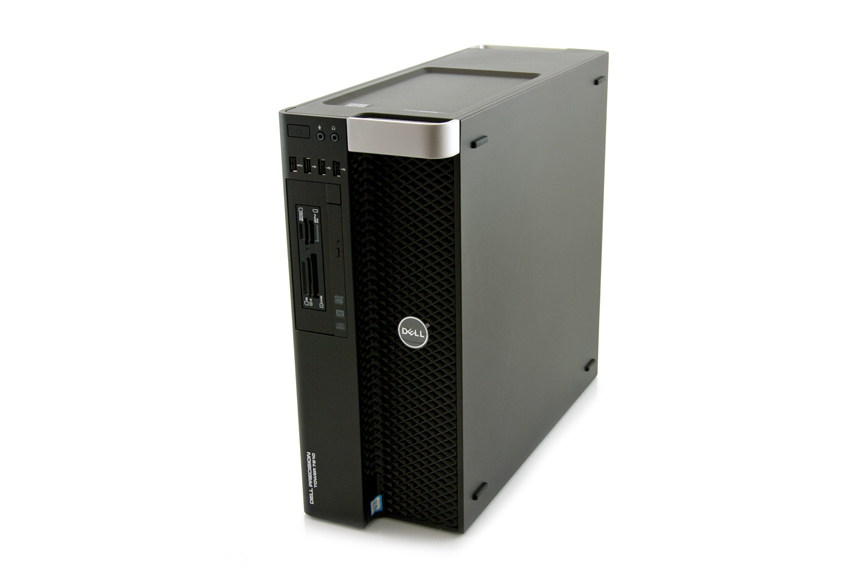 Under the hood, the T7810 comes equipped with the latest dual Intel Xeon E5 processor series, which features up to 22 cores per processor and a generous amount of system memory that can be expanded up to 256GB of 2400MHz DDR4 ECC RAM. The newly refreshed Dell workstation also has various NVIDIA Quadro and AMD FirePro graphics card options, which range from low- to high-end performance; we’ve seen these new graphic cards used often in recent workstation reviews. Users can equip their workstation with up to two PCI Express x16 Gen 2/Gen 3 route, allowing for some pretty demanding software applications and large data sets.

The updated T7810 is identical in design to the previous model. The T7810 has a black metal casing and two silver metal handles located on top for easy mobility. This is a nice thing to have, as this workstation is a fairly hefty machine. On the front and right-hand panels, the vast majority of real estate of the T7810 is composed of ventilation, with Dell branding in the middle of the front panel. Moreover, there is further ventilation near the optical drive on the left-hand side.

Connectivity and functionality is all located at the top left of the workstation: power button/power light, hard-drive activity light, microphone and headphone connector, one USB 3.0 and two USB 2.0 connectors, and the optional optical drive.

On the rear panel, the new T7810 has the same connectivity options as the previous model. Surrounded by a generous amount of ventilation, the top left of the workstation has two audio ports (Line in/mic, Line out), a serial port, two USB 2.0 and a LAN port, PS/2 ports for keyboard and mouse, and more USB options (three USB 3.0 and one USB 2.0) for a total of eight ports.

Located below this connectivity are the add-in cards/optional ports. The 7810 is highly customizable, so this area will certainly look different on a case-by-case basis.

At the bottom of the T7810 is the power supply, and the power input is in the bottom right hand corner, accompanied by dual fans. 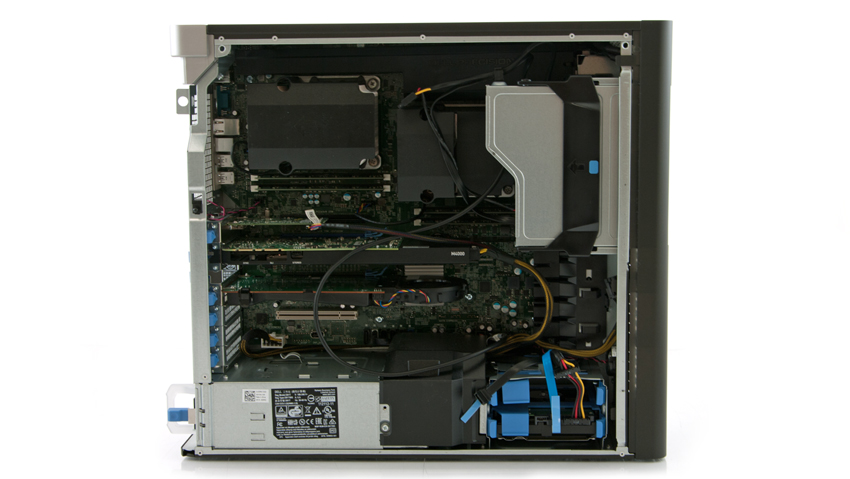 We have equipped the T7810 with the high-performance NVIDIA Quadro M5000 workstation PCI Express 3.0 x16 graphics card. The M5000 is equipped with 8GB GDDR5 of memory, allowing users to create and render large, complex models and to compute massive datasets with ECC support for further reliability. It includes 30-bit color support for high-dynamic range displays and features temperature control software. The M5000 has a maximum resolution of 4096 x 2160 at 60 Hz (true 4K).

The M5000 also leverages technologies such as CUDA and NVIDIA Application Acceleration Engines, allowing them to work much more effectively during resource-heavy applications, such as 3ds Max and AutoCAD.

To test the Dell T7810 workstation, we put it through a variety of benchmarks to demonstrate its performance in resource-intensive workloads. We’ll also be examining the benefits of the PM951 NVMe drives and will be documenting the performance of the NVIDIA Quadro M5000 graphics card. We will be comparing the T7810 to two other Dell products: a mobile workstation, the 7510, and a general consumer laptop, the Inspiron 7559. These comparisons aren’t set up to show that one is “better” per se, but instead to illustrate the performance difference one can see in the products to help customers choose the right device for their workloads.

The first benchmark is SPECviewperf 12, the worldwide standard for measuring graphics performance based on professional applications. SPECviewperf runs 8 benchmarks called viewsets, all of which represent graphics content and behavior from actual applications. The results of these viewsets include: CATIA (112.02), Creo (72.96), Energy (9.65), Maya (71.24), Medical (41.68), Showcase (58.68), Siemens NX (112.32), and Solidworks (123.50). Overall, the T7810 boasted solid performance when leveraging the NVIDIA M5000. Compared to the mobile computers, the T7810 performed tremendously better.

To further test its performance, we also installed PCMark, which is a tool that calculates the performance at the system and component level. This most often represents typical home user workloads for all types of PCs, including tablets, mobile workstations, and desktops. While there are multiple categories that PCMark tests (including typical work usage, home usage, and creative usage), we will only be looking at storage.

The Storage benchmark tests the performance of any drives installed in the system, leveraging traces recorded from Adobe Creative Suite, Microsoft Office and a selection of more popular video games to measure real-world performance differences between storage devices. Here, the Dell T7810 hit an impressive PCMark score of 5036 with a bandwidth of 676.85MB/s. While the score was less than the 7510, the bandwidth was much higher on the T7810.

For our final benchmark, we will be using a benchmark that looks at several aspects of the ArcGIS program; however, we are most interested in the average of the drawtime, average frames per second (Average FPS), and minimum frames per second (Minimum FPS). Looking at drawtime, the T7810 had a score of 00:00:06.498. Average FPS showed an impressive 368.473 and Minimum FPS showed the 7810 with 192.335, the two highest scores we’ve yet to see in this test. We also documented a step up in performance in the desktop model compared to the mobile version in the Average FPS and Minimum FPS, though the drawtime was slightly longer for the T7810.

As demonstrated above, the newly updated Dell T7810 is a flexible tower workstation that thrives in CPU-intensive application workloads. Users also have a diverse selection of hardware to choose from, including the Intel Xeon E5 processor series that features up to 22 cores per processor, upwards of 256GB of 2400MHz DDR4 ECC RAM and a range of AMD FirePro and NVIDIA Quatro graphics cards.

To analyze the overall performance of the T7810 during resource-intensive and casual workloads, we put it through a range of different benchmarks. Our build during these tests were highlighted by the Intel Xeon CPU E5-2699 v4, 64GB of RAM, and a 1TB Samsung PM951 NVMe SSD for maximum transfer speeds. We also looked at the performance of the NVIDIA M5000, a high-performance video card equipped with 8GB GDDR5 of memory.

To further test its performance, we also ran SPECwpc and PCMark. In the former test, which consists of over 30 workloads that it uses to test CPU, graphics, I/O, and memory bandwidth, the Dell T7810 showed some great results once again. In every category, the workstation tested much higher than the notebook with scores of 4.28 (media and entertainment), 5.02 (financial services), 4.9 (product development), 7.6 (energy), 6.12 (life sciences) and 1.57 (general operations). Lastly in the PCMark storage benchmark, the strength of the current-generation NVMe boot device showed through with its 676MB/s average transfer speed. Overall the Dell Precision Tower 7810 offered impressive speed and configuration options, now supporting the latest generation of Intel CPUs.