The 1TB Samsung Spinpoint M8 offers a mainstream 9.5mm drive height with two 500GB platters, bringing high capacity notebook storage to the masses. Previously if you wanted a 1TB internal hard drive, the only option was to buy a bulky notebook that supported the larger 12.5mm drive sizes. With the Spinpoint M8, just about any machine can now have a beefy storage system ready to warehouse digital assets.

The 1TB Samsung Spinpoint M8 offers a mainstream 9.5mm drive height with two 500GB platters, bringing high capacity notebook storage to the masses. Previously if you wanted a 1TB internal hard drive, the only option was to buy a bulky notebook that supported the larger 12.5mm drive sizes. With the Spinpoint M8, just about any machine can now have a beefy storage system ready to warehouse digital assets.

To give the Spinpoint M8 its high 1TB capacity and short 9.5mm height, Samsung used a twin 500GB per platter design; this is the highest platter capacity available in a 2.5-inch drive. High platter density is almost always beneficial to performance, especially when reading large sequential (unbroken) files. To cope with the high platter density, the M8 uses the new Advanced Format, which has 4k sectors (eight times larger than the previous 512b).
Aside from its twin 500GB platters, the M8 is generally straightforward. The platters rotate at 5400RPM, which is typical of mainstream drives. Higher performance drives run at 7200RPM, albeit with slightly higher power consumption and lower capacities. The M8 has an 8MB cache, which seems small (and it is) but the cache size is one of the lesser performance factors in a hard drive. 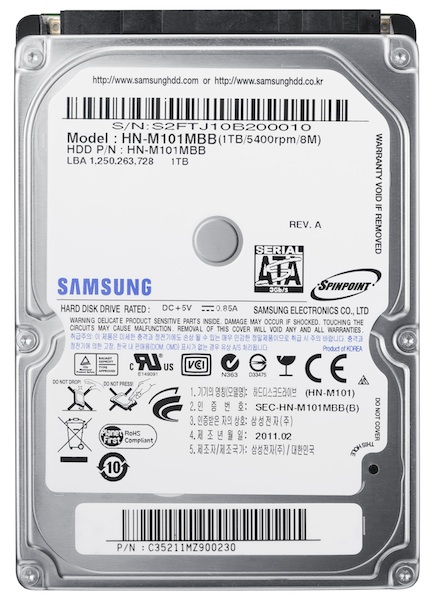 Samsung M8 Specifications (HN-M101MBB)
Aesthetics
The SpinPoint M8 looks and feels like a typical 2.5-inch, 9.5mm height drive. The label on top is standard and closely resembles the labels of other Samsung drives. The text is black on white, with a small amount of blue added by the Samsung branding. 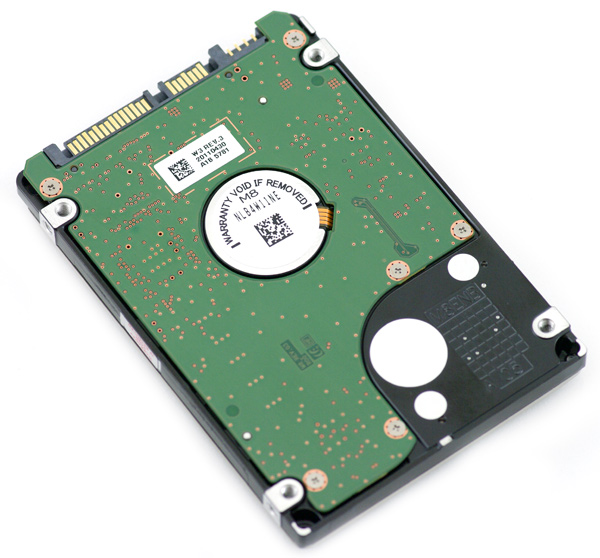 The inward-facing circuit board on the bottom is about the same size as used by competitors such. Notice the four pin jumpers on the right side – none are in use and their functionality is unknown. They may be useful for diagnostics or similar performed at the factory. 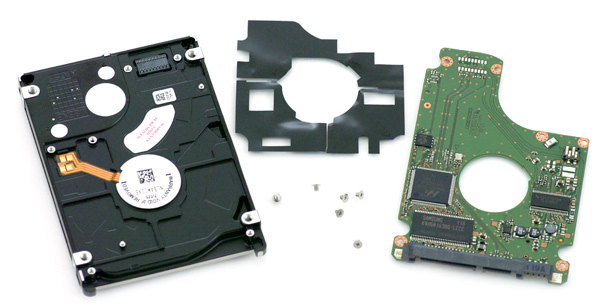 The Samsung Spinpoint M8 is held together with six small Phillips head screws, which hold the circuit board onto the body of the drive. With all six screws removed the PCB easily lifts off exposing the primary components on the bottom of the board as well as a thin insulating sheet of plastic. 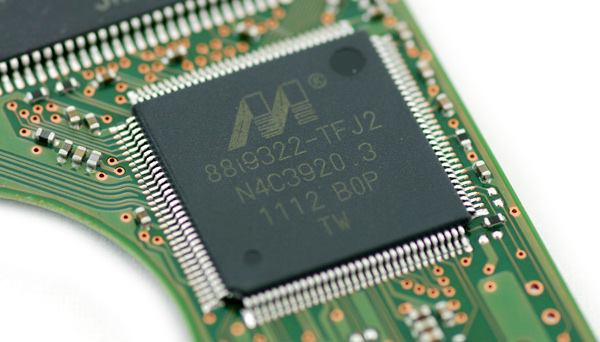 The Spinpoint M8 utilizes a Marvell 88i9322-TFJ2 controller with 8MB of DDR cache provided by a Samsung K4H641638-LCCC memory chip. 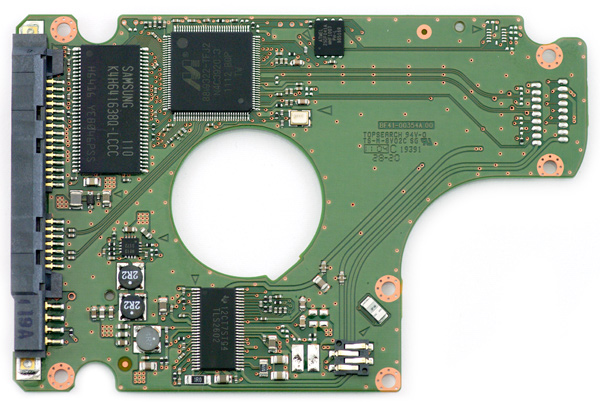 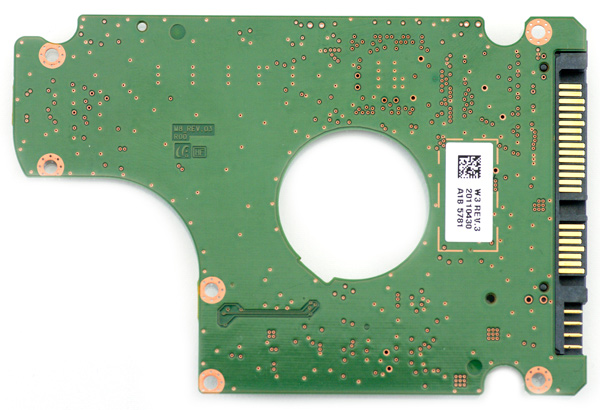 We kick off our storage reviews with synthetic benchmarks. The results of these benchmarks typically correlate with real-world performance, though not always. We’ll have a full suite of real-world benchmarks later on in this review, which will be the ultimate judge of performance. 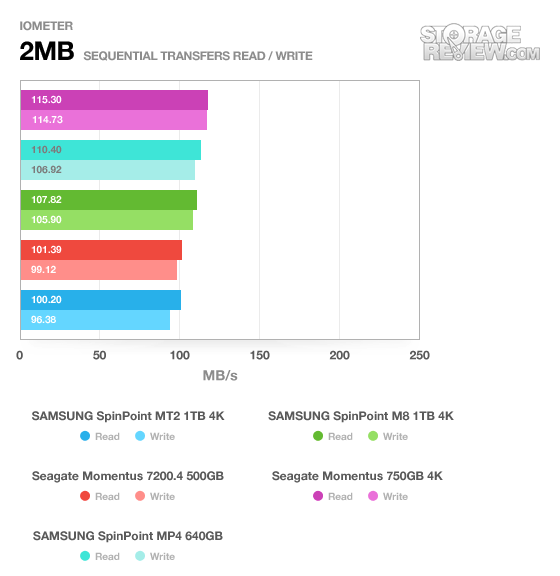 This is a sequential transfer benchmark; that means high platter density is an asset. The Samsung M8 with its two 500GB platters certainly has an abundance of that. The M8 performs rather well given it has a rotational speed of only 5400RPM; some of the competing drives spin much faster at 7200RPM. Notice how the M8 beats the MT2, which is one of the older 2.5-inch 1TB drives with a 12.5mm z-height. 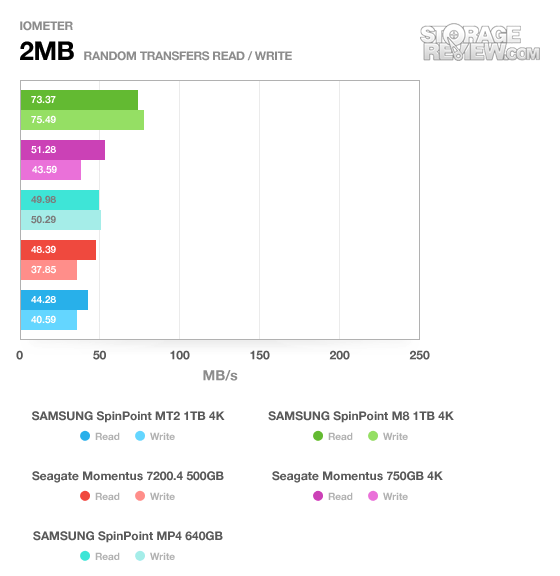 Now we switch to a random data transfer benchmark.  The M8 puts up nothing less than a stellar showing, eclipsing its nearest competitor (the Seagate Momentus 750GB) by a margin over 30%. Can the M8 keep up this pace? 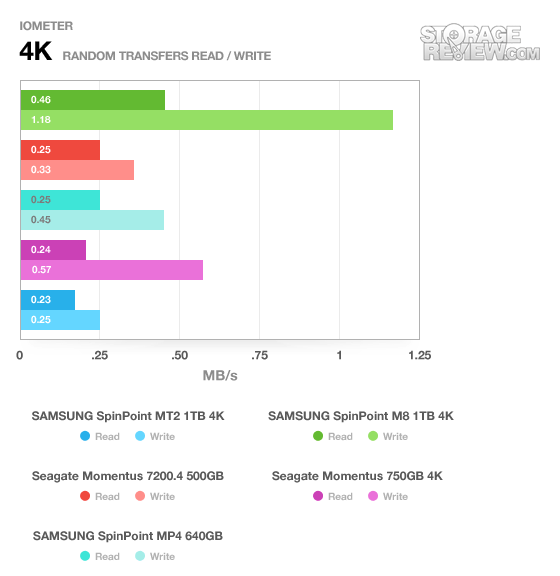 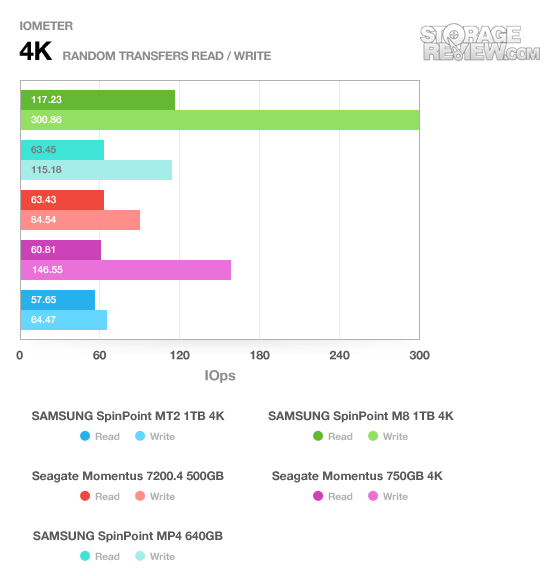 This benchmark is similar to the last except the file size is much smaller. The M8 makes a repeat showing, putting up spectacular numbers compared to the competition. So far, so good. 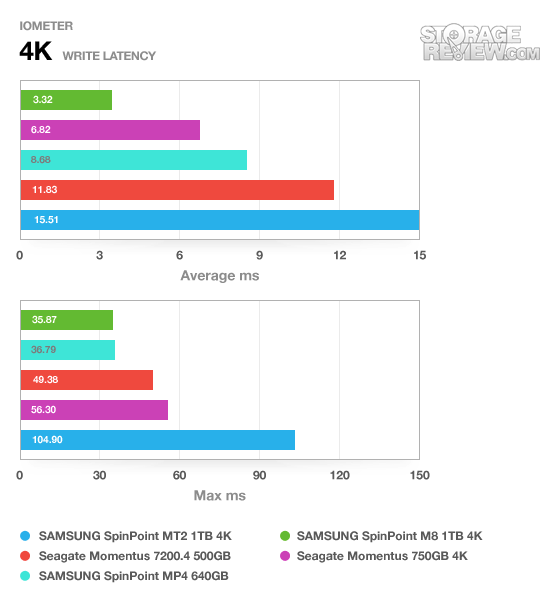 Write latency is essentially the responsiveness of a drive; the lower latency, the better. The M8’s high platter density is again an asset and overall the drive blows away its nearest competitor by a factor greater than two.
The next set of IOMeter benchmarks simulates a server-style load on the drive. Typically we expect to see the performance climb from left to right. 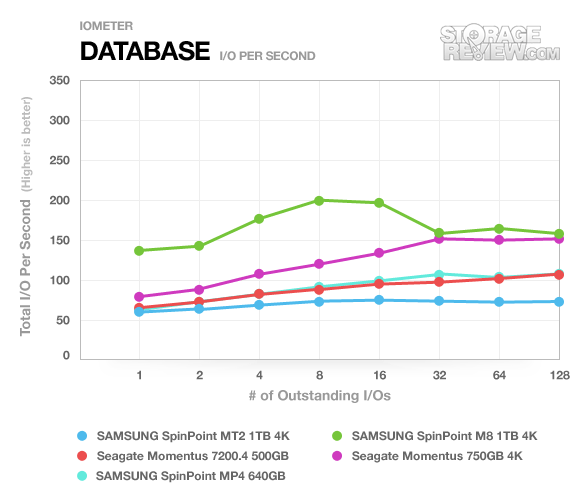 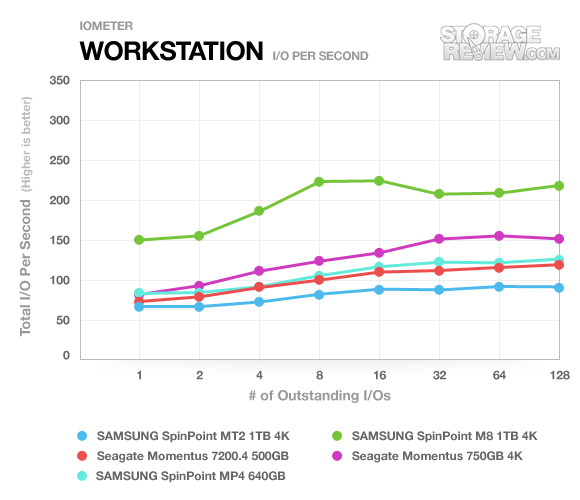 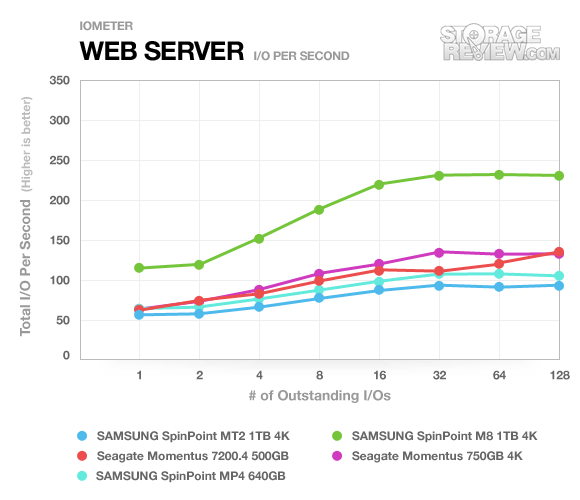 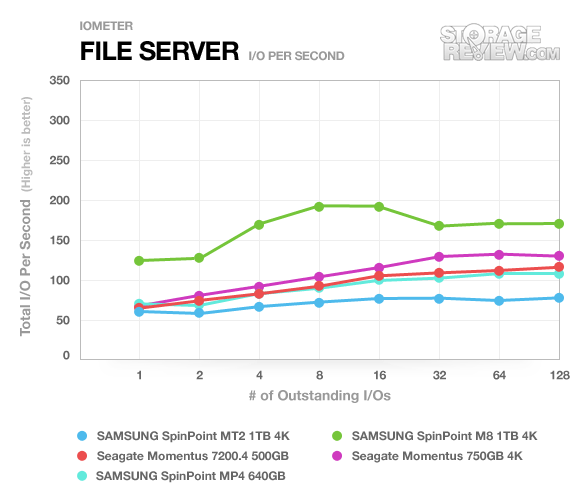 The M8 simply has no competition. It may not be the most consistent performance-wise, but maintains a comfortable lead at all times. 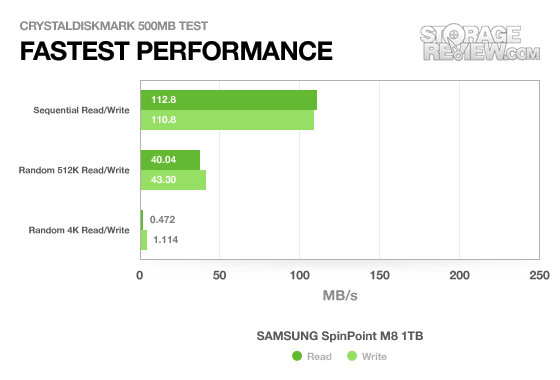 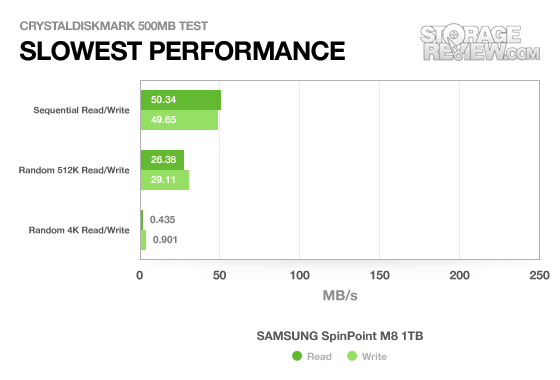 The CrystalDiskMark numbers are in line with what we’ve come to expect from this drive.

The synthetic benchmarks we ran are only simulations of real-world performance, not substitutes. This part of the review focuses on our custom-scripted real-world benchmarks, which use actual applications and data to let you know exactly what to expect from the Samsung M8.
In this test we include: playing one 720P HD movie in Media Player Classic, one 480P SD movie playing in VLC, three movies downloading simultaneously through iTunes, and one 1080i HDTV stream being recorded through Windows Media Center over a 15 minute period. Higher IOps and MB/s rates with lower latency times are preferred. In this trace we recorded 2,986MB being written to the drive and 1,924MB being read. 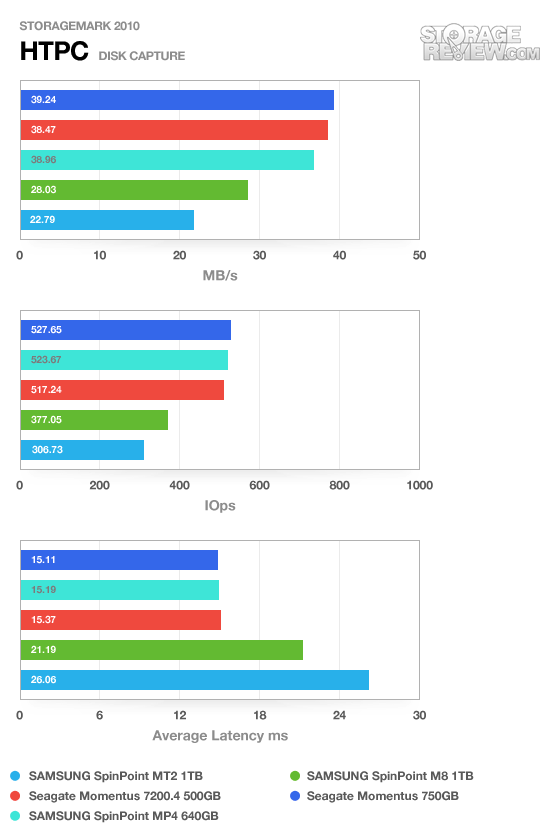 What’s this – the M8 falling behind? As I noted in the beginning, the synthetic benchmarks we ran typically correlate with real-world results, but as any experience statistician will say, correlation does not mean causation. The likely culprit of the M8’s bottom-rung performance is its slower 5400RPM spindle speed. With that said, it did show a strong boost in speed over the 12.5mm 1TB MT2, which it is replacing.
This real-life test covers disk activity in a gaming environment. Unlike the HTPC trace, this one relies heavily on the read performance of a drive. To give a simple breakdown of read/write percentages, the HTPC test is 64% write, 36% read, the Productivity test is 59% write and 41% read, while the gaming trace is 6% write and 94% read. The test consists of a Windows 7 Ultimate 64-bit system pre-configured with Steam, with Grand Theft Auto 4, Left 4 Dead 2, and Mass Effect 2 already downloaded and installed. The trace captures the heavy read activity of each game loading from the start, as well as textures as the game progresses. In this trace we recorded 426MB being written to the drive and 7,235MB being read. 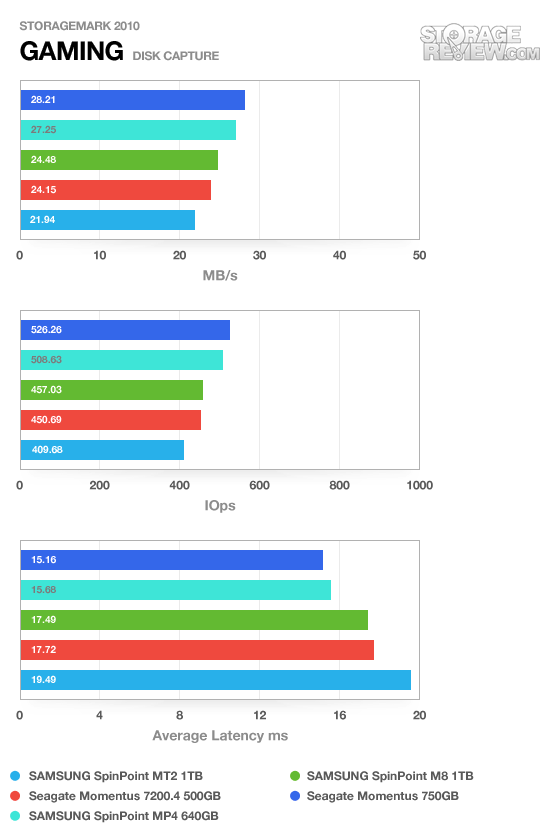 Similar to the HTPC trace, the M8 can’t really keep up with the faster 7200RPM competition, but it does manage to still keep a strong lead above the MT2 and even the Seagate Momentus 7200.4.

The M8’s power consumption is respectable and well within what we would expect for a 2.5-inch 5400RPM drive. 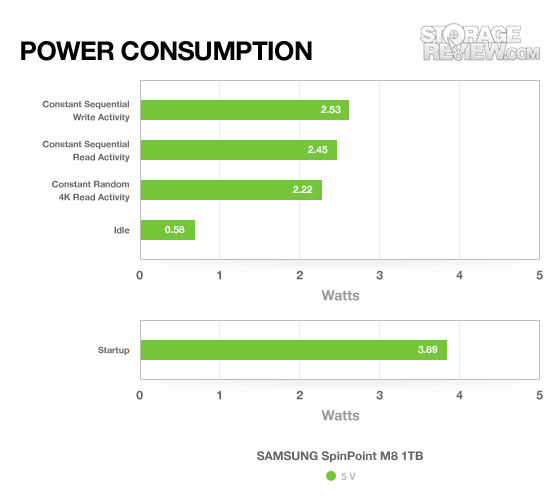 The Samsung M8 is backed by an industry-standard 3-year limited warranty.

The Samsung Spinpoint M8 is the first notebook hard drive to ship that packs 1TB of storage into a standard 9.5mm z-height form factor. Previously, those looking for 1TB in a notebook drive had to use a 12.5mm height drive, which of course limits your options when selecting a notebook – capacity is definitely the M8’s biggest selling point.
The M8 performed extremely well in our synthetic benchmarks. Compared to the latest 2.5-inch high-performance 7200RPM drives, the 5400RPM M8 left us feeling a bit underwhelmed, but it stood up well to the other 5400RPM drives. In real-world benchmarks it constantly outpaced the older and taller SpinPoint MT2, which in our book is always a good thing.
Overall we find the Samsung M8 an easy drive to recommend – just don’t expect to break any performance barriers. At about $100 street, it’s an excellent value for those that need the most storage capacity in their notebook.
Pros:
Cons:
Bottom Line
While its real world performance numbers are less than impressive, the M8 finally puts 1TB of storage into a standard-height 9.5mm notebook hard drive and is easy to recommend.
Discuss This Review
Buy the Samsung Spinpoint M8 at NewEgg
Samsung M8 160GB
Samsung M8 320GB
Samsung M8 500GB
Samsung M8 750GB
Samsung M8 1TB – Coming Soon
0 comment
0
FacebookTwitterPinterestEmail