There were few surprises when Apple updated the MacBook Air line yesterday, adding a faster Intel Core i5 processor, more RAM, backlit keyboard and a few other goodies like a Thunderbolt port and Mac OS X Lion. We’re most interested in the MacBook Air’s SSD though; we quickly tore down the 128GB MacBook Air to see what’s inside in this mini-review.

There were few surprises when Apple updated the MacBook Air line yesterday, adding a faster Intel Core i5 processor, more RAM, backlit keyboard and a few other goodies like a Thunderbolt port and Mac OS X Lion. We’re most interested in the MacBook Air’s SSD though; we quickly tore down the 128GB MacBook Air to see what’s inside in this mini-review. 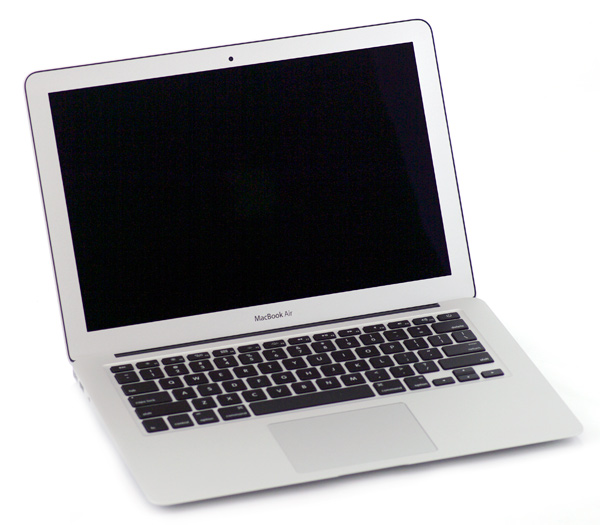 Perhaps one of the most important complaints about SSDs and Apple in general was resolved with the Lion operating system update. Lion reportedly does hundreds of new or improved things, one of which is now support of TRIM for SSDs. The screenshot below is from the new MacBook Air, but it looks roughly the same on prior generation MacBook Air notebooks with the Lion update applied. 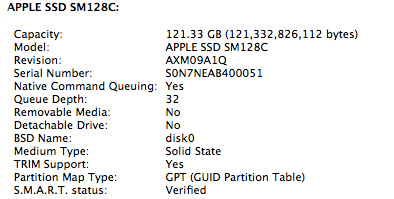 A quick glance at the drive details shows TRIM support and a new model number for the SSD. The new SSD is called Apple SSD SM128C, where the previous generation was called Apple SSD TS128C. Aside from name changes, physically the drives are very similar, Apple maintains the stick-of-gum SSD design. 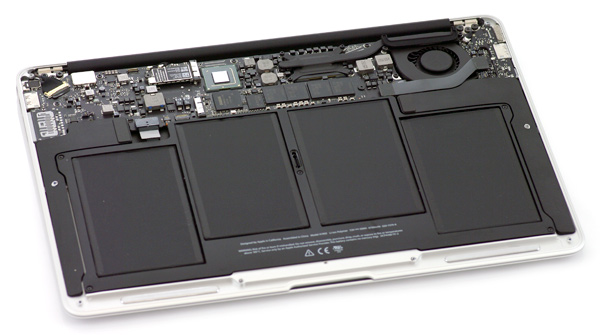 When we get down to the component level, we see Apple has opted for all Samsung components, which are also found in the Samsung 470 SSD reviewed last year. The controller is Samsung sourced, with the markings S3C29MAX01-Y340. The RAM and NAND are also Samsung branded, marked as K4T2G6314QE-MCF7 and K9PFGD8U7M respectively. The NAND is 32GB in capacity, totaling 128GB over four chips, giving the end user 121.33GB of usable space. 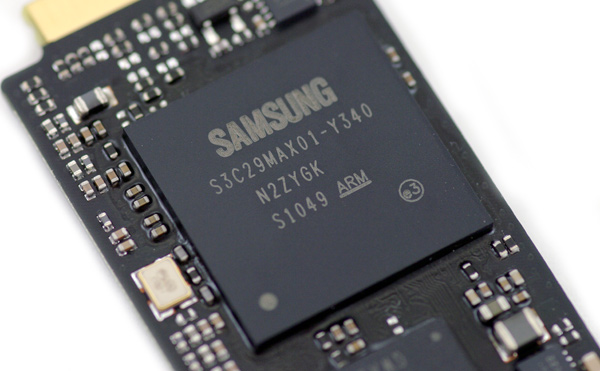 The question on the minds of potential MacBook Air buyers though is around performance. With the new processors, more RAM and potentially improved SSD, how does this notebook compare to the prior generation? We ran the Xbench1.3 drive benchmarks to compare both to the previous generation MacBook Air SSD and the OWC Mercury Aura Pro Express SSD upgrade.

While not exactly apples to apples, this does at least paint a picture of what users can expect from the new SSD. For sequential transfers, we saw 4K writes of 210.97 MB/s and reads of 29.21 MB/s. When switching to 256K, the writes go to 194.80 MB/s and reads 212.40 MB/s. Compared to our prior generation Air, there are massive gains in the 4K tests, the 4K read speeds for instance nearly doubled and the 4K writes were up 100 MB/s. On the 256K tests the writes saw a modest improvement and the reads about 50 MB/s.

In random transfers the new Apple SSD saw 4K write speeds of 80.78 MB/s and reads of 12.86 MB/s. Switching to 256K, we found writes of 126.05 MB/s and reads of 141.13 MB/s. The 4K read speeds are incrementally better with the new drive, up about 10%. The 4K writes were where the old drive performed the worst and thankfully the new one is much better, going from 29.82 MB/s to a hair over 80 MB/s, a very welcome improvement. The 256K benchmarks saw mixed results, the new SSD picks up almost 40 MB/s on the read speeds but gives up the same amount on the writes.

Overall, the new SSD seems to perform well, in anecdotal testing the revised MacBook Air handles things like streaming HD video much better, where the prior generation quickly spun the fan into high gear and started stuttering during playback under heavy load. The other new touches are nice too, the backlit keyboard is great for low-light work, and the keyboard in general is a bit less springy than before. For anyone considering a ultraportable notebook, it’s difficult to beat the current line of MacBook Air products.