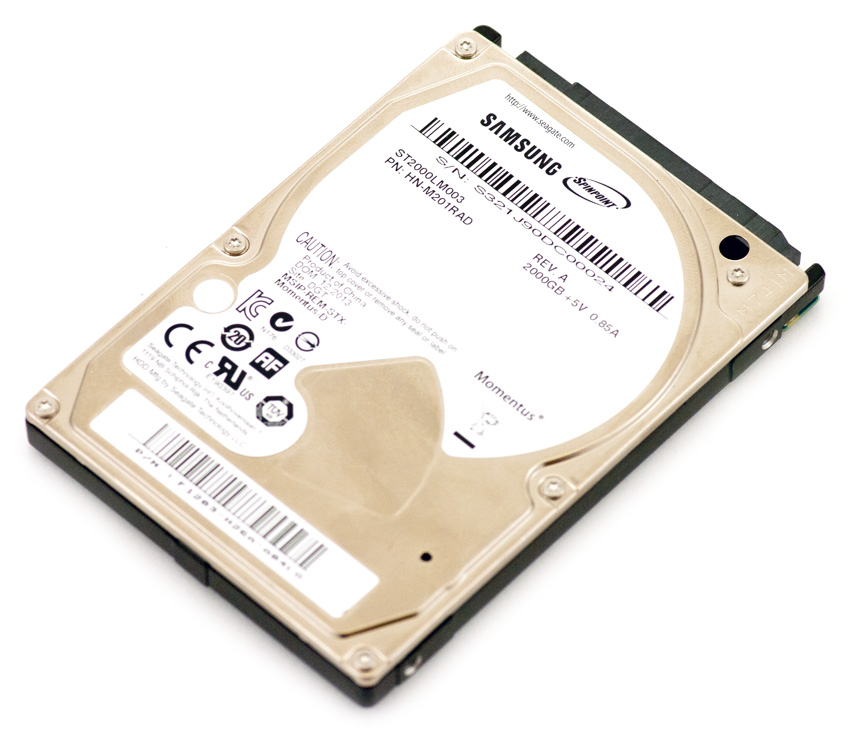 A quick glance at the portable hard drive space shows why this drive is so special. There are other 2TB drives out there, WD announced a 2TB 2.5″ drive two years ago, but with a drive height of 15mm, WD was going after the portable hard drive market, which had stagnated with the rest of the notebook hard drive market that stalled out at 1TB. The z-height makes the WD drive too tall though for notebooks, due to its use of a 4 platter design. The Samsung M9T accomplishes its massive storage by solving the density problem, utilizing three 667GB platters within its confines. While it’s easy to forget that Samsung, now a Seagate company, is still cranking away at the hard drive business, they’ve certainly come back with a bang with the M9T.

The M9T is highlighted by its capacity and physical size, but there’s plenty of other engineering inside. The drive is notably quiet thanks to its use of NoiseGuard and SilentSeek technologies; it reportedly maintains 25 decibels while idle and 27 decibels during performance. It comes equipped with both ATA Security Mode and ATA S.M.A.R.T. features to keep the drive protected from anyone but the intended user. The Spinpoint M9T also comes equipped with standard head load/unload technology to keep it protected from internal physical damage, which is a consideration with any HDD.

The Samsung M9T comes in 1.5TB and 2TB capacity points and carries a 2 year warranty.

The Spinpoint M9T looks and feels like a typical 2.5-inch, 9.5mm height drive. The label on top is standard and closely resembles the labels of other Samsung drives, including basic information about the drive such as capacity, model and serial numbers, as well as power requirements. The drive is mostly branded with Samsung elements, although there is reference to Seagate with the Momentus branding off to the side.

The 2TB Samsung M9T includes a Marvell controller, a Smooth motor driver, as well as a Winbond DDR2 memory module. 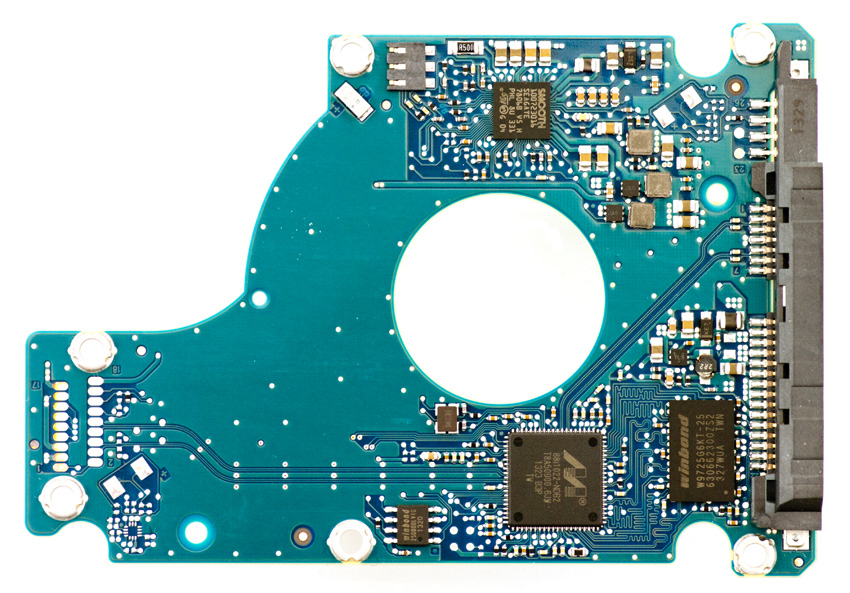 The two categories of benchmarks that we commonly test all consumer HDDs and SSDs on show performance strengths in different areas. Our synthetic benchmarks are geared towards showing the performance of the drive in an uncached “worst case” scenario, while our real-world traces allow the drive to cache data and better show how the drive would perform during repetitive day-to-day activities.

In random transfers, the Spinpoint M9T performed more averagely; its scores of 47.2 and 45.8MB/s (read/write) were comparable to most of the other drives tested, the exceptions being the Seagate Momentus XT 750GB and Seagate Laptop Thin SSHD with 83.6/89.5MB/s and 73.5/86.6MB/s (read/write), respectively.

The Spinpoint M9T scored poorly compared to the other drives tested in 4K random transfer rates. It achieved 0.219MB/s and 56.2 IOPS (read) and 0.382MB/s and 97.8 IOPS (write), the lowest numbers in each measurement. 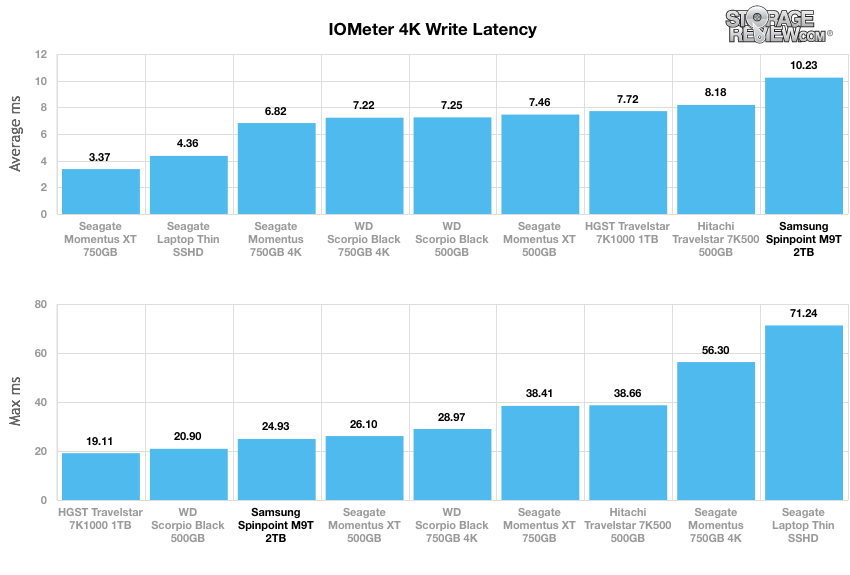 Our last series of synthetic benchmarks compares the hard drives in a series of server mixed-workloads with a queue depth of ranging from 1 to 128. Each of our server profile tests has a strong preference towards read activity, ranging from 67% read with our database profile to 100% read in our web server profile. The Spinpoint M9T placed either last or tied for last (with the Hitachi Travelstar 7K500) in each mixed workload, although most of the other drives we tested performed very similarly (the exceptions being the Seagate Momentus XT 750GB and Seagate Laptop Thin SSHD, which consistently lead the pack).

In the database workload, both the Spinpoint M9T and Hitachi Travelstar 7K500 maintained roughly 95 IOPS as they passed 8 outstanding IOs. The Seagate Momentus XT 750GB dominated the group with roughly 130 IOPS after exceeding 16 outstanding IOs. 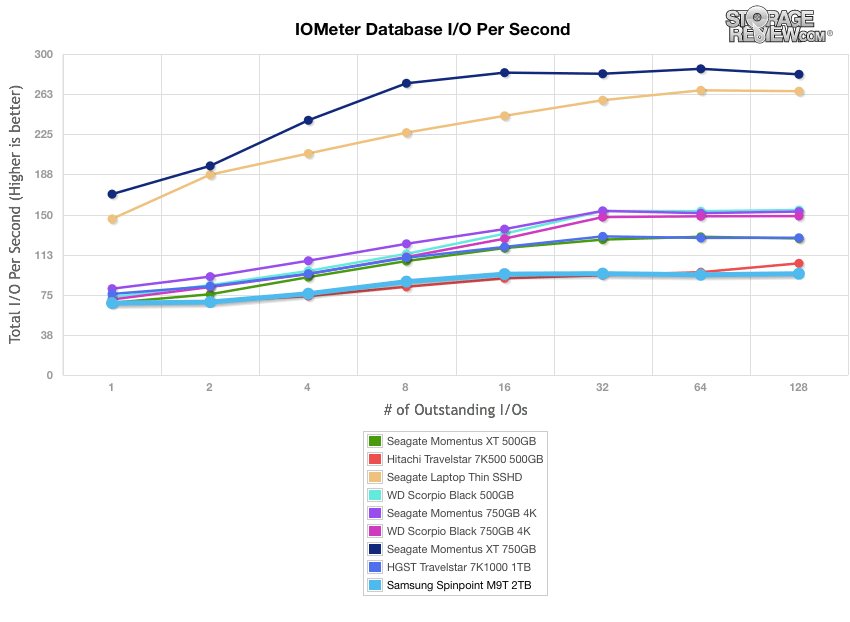 Once again the Spinpoint M9T and Hitachi Travelstar 7K500 were equivalent in the file server workload; they maintained roughly 90 IOPS after exceeding 16 outstanding IOs. 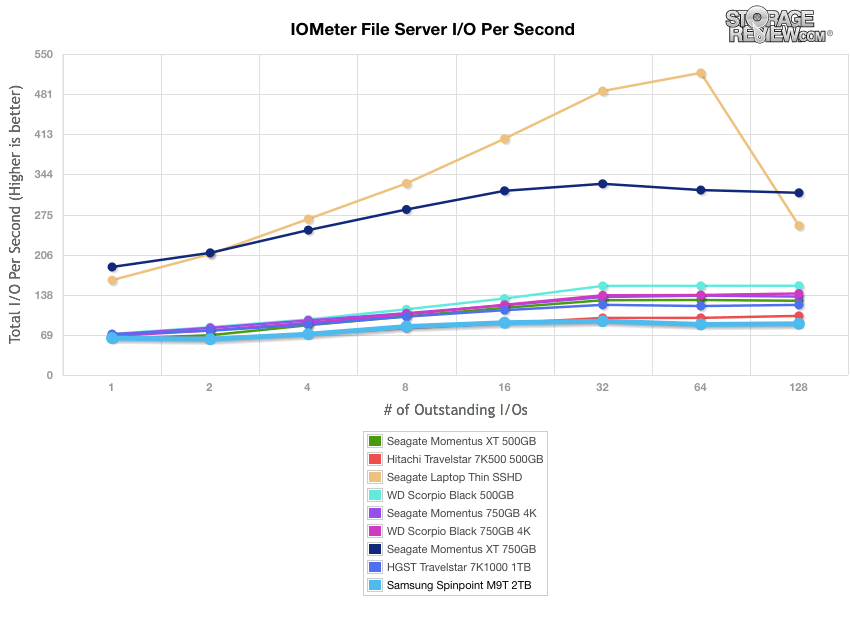 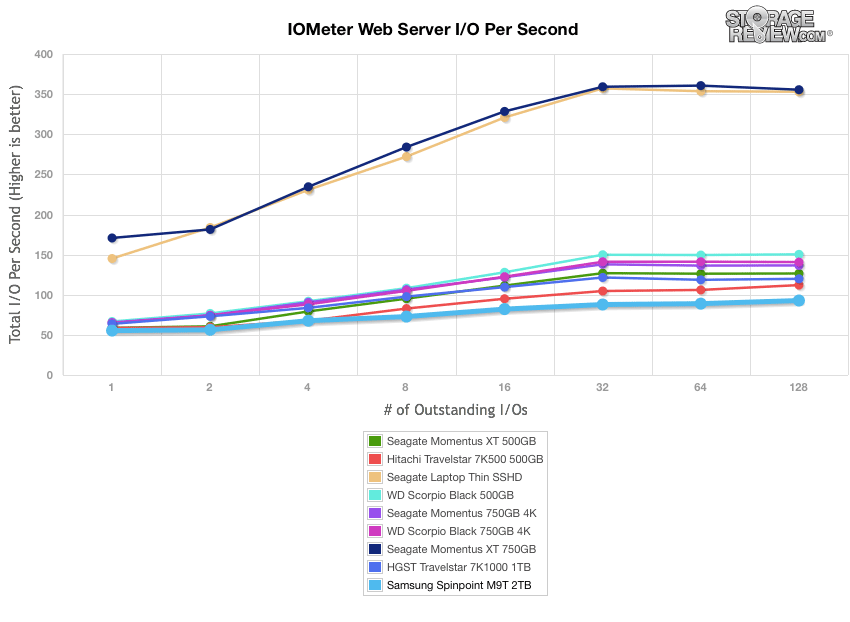 The Spinpoint M9T and Hitachi Travelstar 7K500 were again equivalent in the workstation workload, staying around 100 IOPS after exceeding 32 outstanding IOs. 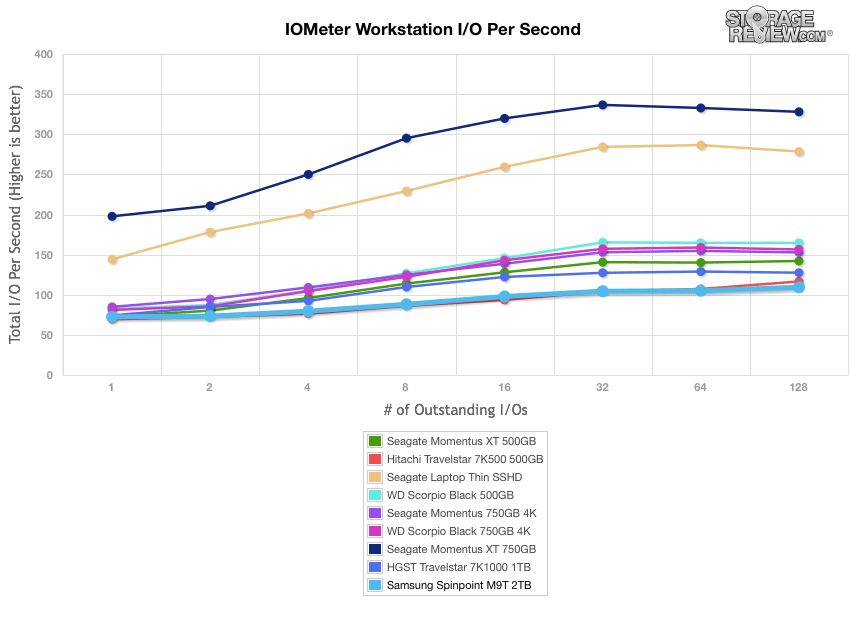 For the average consumer, trying to translate random 4k write speeds into an everyday situation is pretty difficult. It helps when comparing drives in every setting possible, but it doesn’t exactly work out into faster everyday usage or better game loading times. For this reason we turned to our StorageMark 2010 traces, to help readers find out how a drive might rank under their conditions.

The first real-life test is our HTPC scenario. In this test we include: playing one 720P HD movie in Media Player Classic, one 480P SD movie playing in VLC, three movies downloading simultaneously through iTunes, and one 1080i HDTV stream being recorded through Windows Media Center over a 15 minute period. Higher IOps and MB/s rates with lower latency times are preferred. The Spinpoint M9T showed an average performance in this test, scoring almost exactly in the middle of the pack for each measurement (559.2 IOPS, 41.6MB/s, and 14.2ms). 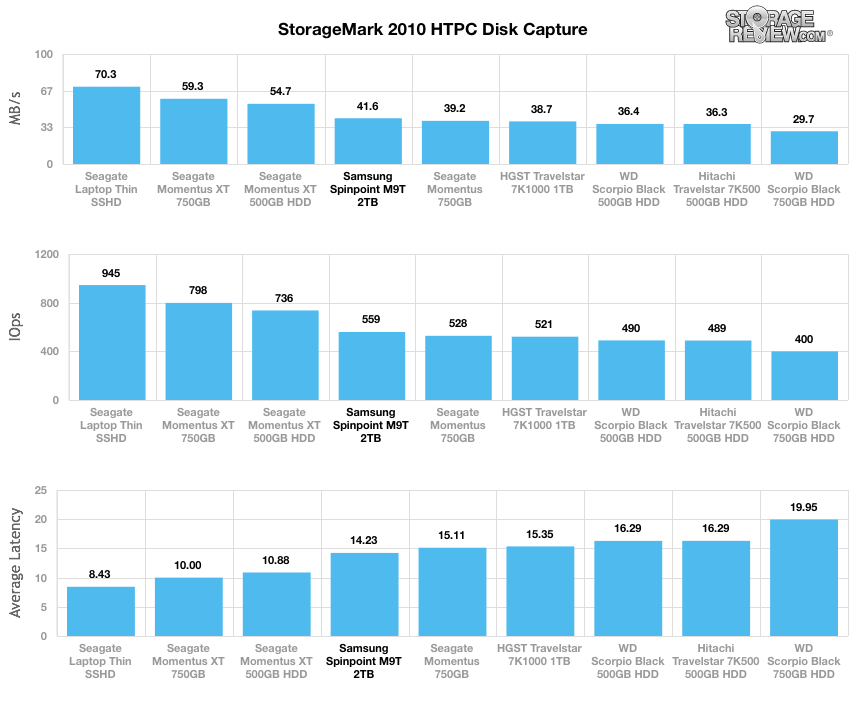 Our second real-life test covers disk activity in a gaming environment. This trace relies heavily on the read performance of a drive. To give a simple breakdown of read/write percentages, the HTPC test is 64% write, 36% read, the Productivity test is 59% write and 41% read, while the gaming trace is 6% write and 94% read. The test consists of a Windows 7 Ultimate 64-bit system pre-configured with Steam, with Grand Theft Auto 4, Left 4 Dead 2, and Mass Effect 2 already downloaded and installed. The trace captures the heavy read activity of each game loading from the start, as well as textures as the game progresses. In this trace we recorded 426MB being written to the drive and 7,235MB being read. 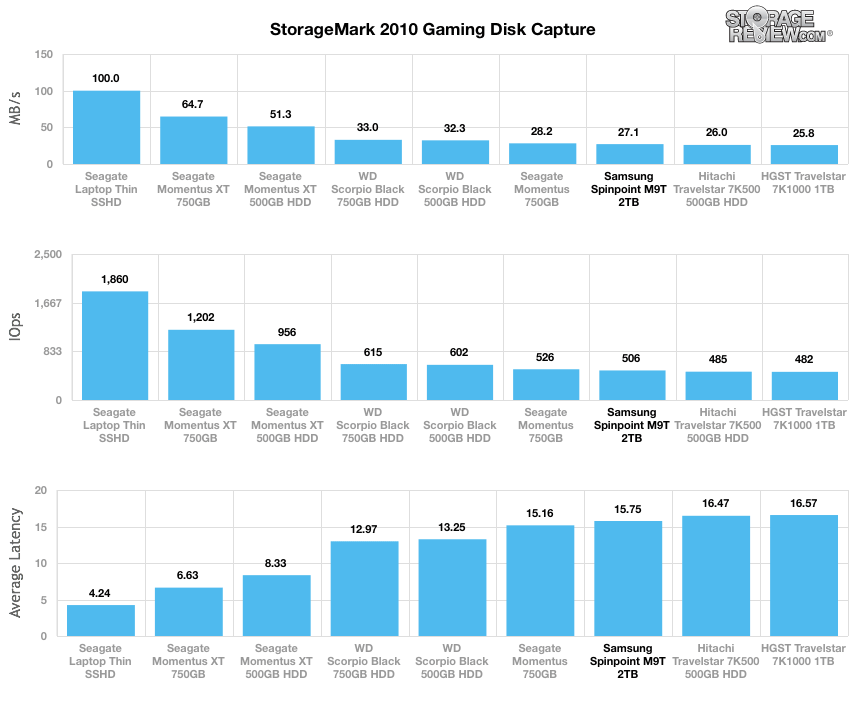 With any laptop drive, power consumption is an important factor for users. The key sources of power draw get narrowed down to either the bright screen or the storage device used. In the next test, we record the average power consumed over a small range of synthetic benchmarks. For reference, Samsung lists an average idle power rate of 0.7 watts and an active seek rate of 2.3 watts.

Compared to the other drives tested, the Spinpoint M9T showed an average idle and startup power consumption of 0.87W and 4.30W, respectively. However, it consumed less power during write, read, and random read tasks (2.86W, 2.79W, and 2.28W, respectively) than any of the other drives tested (the only exception being the Seagate Laptop Thin SSHD, which only consumed 2.07W during random read tasks).

The Spinpoint M9T serves as a welcome reminder that Samsung engineers are still working away under Seagate ownership to continue to improve their mobile hard drive offerings. The Spinpoint platform has been very popular in the notebook space, the 1TB M8 drives that are several years old, still find their way in to many OEM systems. The M9T then offers the company an excellent opportunity to grab market share with their 2TB drive capacity that just can’t be matched today by any other vendor in a standard 9.5mm, 2.5″ form factor.

Considering the fact that the drives to which we compared the Spinpoint M9T are built to be faster (most of them 7,200RPM), this drive performed remarkably well, often achieving competitive numbers. Since this drive will likely be utilized in a notebook, HTPC or game console setting, the low performance power consumption is especially promising. Against other HDDs we compared it to, it offered the highest sequential transfer speeds topping just under 125MB/s. For moving media around or acting as a bulk storage device this would be its primary use case. When we switched to more random workloads the edge on competing drives dropped and it lagged towards the bottom of the pack. Overall we were very impressed by the Samsung M9T, which upped the capacity of existing 2.5″ consumer HDDs and did so without moving to an exotic form factor.

The Samsung Spinpoint M9T drive is a great choice for any consumer wishing to acquire the largest possible storage space in a standard form factor. Samsung didn’t just make the M9T big though, the drive posts excellent sequential transfer speeds, which is great for many of the drive’s intended use cases.