Micron/Crucial’s 20nm 128Gb MLC NAND was released in 2013 and hit the market in a consumable way as the first terabyte-class M500 SSD. The drive debuted at a price under $600 and proved to be a decent performer, though it is more a mainstream drive for consumers under the Crucial brand and for OEMs and system builders with the Micron flag. Today's release of the new similarly branded Crucial/Micron M550 expands on their personal storage line with improved performance, longer battery life, new capacity and form factor options, and an advanced feature set. The M550 SSD is specifically designed to meet the needs businesses and enthusiasts who are heavily involved with high-performance computing, ultrathin, and media/video applications. The M500 will stay in market, providing a balance of price and performance.

Micron’s 20nm 128Gb MLC NAND was released in 2013 and hit the market in a consumable way as the first terabyte-class M500 SSD. The drive debuted at a price under $600 and proved to be a decent performer, though it is more a mainstream drive for consumers under the Crucial brand and for OEMs and system builders with the Micron flag. Today's release of the new similarly branded Crucial/Micron M550 expands on their personal storage line with improved performance, longer battery life, new capacity and form factor options, and an advanced feature set. The M550 SSD is specifically designed to meet the needs businesses and enthusiasts who are heavily involved with high-performance computing, ultrathin, and media/video applications. The M500 will stay in market, providing a balance of price and performance.

Performance-wise, the M550 is quoted to deliver 550MB/s for sequential read and 500MB/s for sequential write, as well as 95K IOPS random read and 85K IOPS random write. To reach these speeds, its core technology includes a Micron 20nm 64GB with 128GB NAND and a Micron custom firmware using a Marvell 88SS9189 controller. In addition, the M550 doesn’t require file compression, a NAND buffer, or system DRAM.

Micron has also implemented its industry-leading encryption into its new SSD, which includes AES 256-bit hardware encryption, meeting TCG Opal 2.0 and IEEE-1667 standards as well as being compatible with Microsoft eDrive. For further protection, the M550 has a redundant array of independent NAND (RAIN), protecting data at the component level, which is very similar to the way RAID is used with multiple drives. Crucial’s new SSD also uses a data integrity algorithm with four layers of defense against data corruption at the component level to safeguard the data’s integrity. The M550’s adaptive thermal protection maintains optimal operating temperatures, which allows the drive to dynamically adjust NAND activity based on usage demand.

To suit the needs of the many different types enterprises, the Micron M550 is available in three different form factors and in a plethora of capacities:

The Crucial M550’s design is virtually the same as its predecessor, the M500, with a smooth and refined metal, yet durable, enclosure. Its metal build also allows it to be finger-print proof. The front of the drive features a sticker that labels the drive with Crucial logo and specific model number. 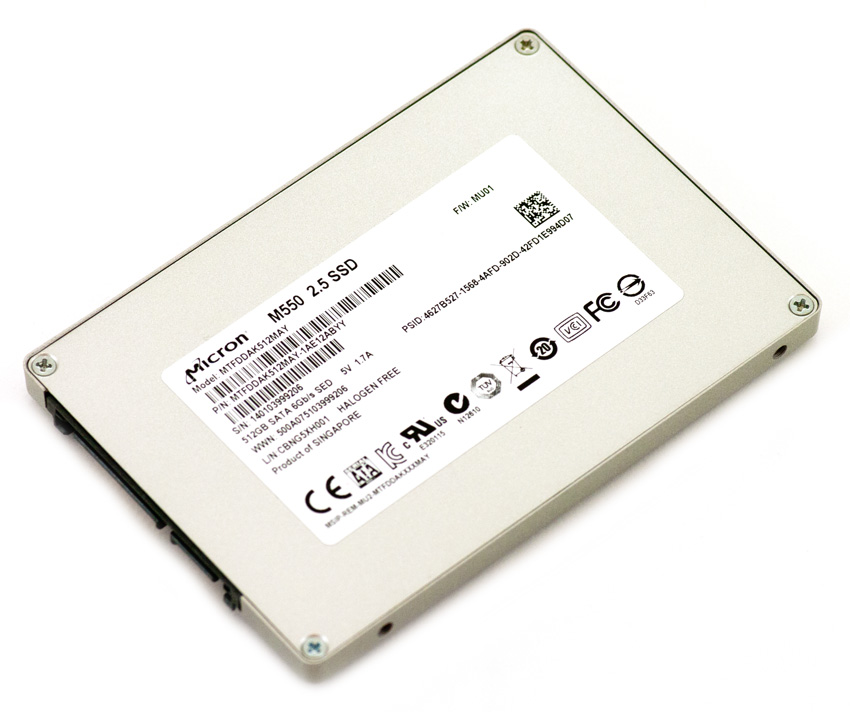 The side profiles present the screw holes that enable the drive to be mounted properly. While many drives are still 9.5mm, the M550 has a slim 7mm profile. The M550 fits well in the 7mm Ultrabook space or in most any other application. The drive is rounded out with standard SATA power and data connectors on the front.

The Crucial M550 1TB model utilizes the newer Marvell 9189 controller as well as 16 total NAND die, meaning that each NAND die is 64GB. The new models also give users more capacity, for example a 512GB capacity instead of 480GB or 1024GB vs 960GB that the M500 offered. 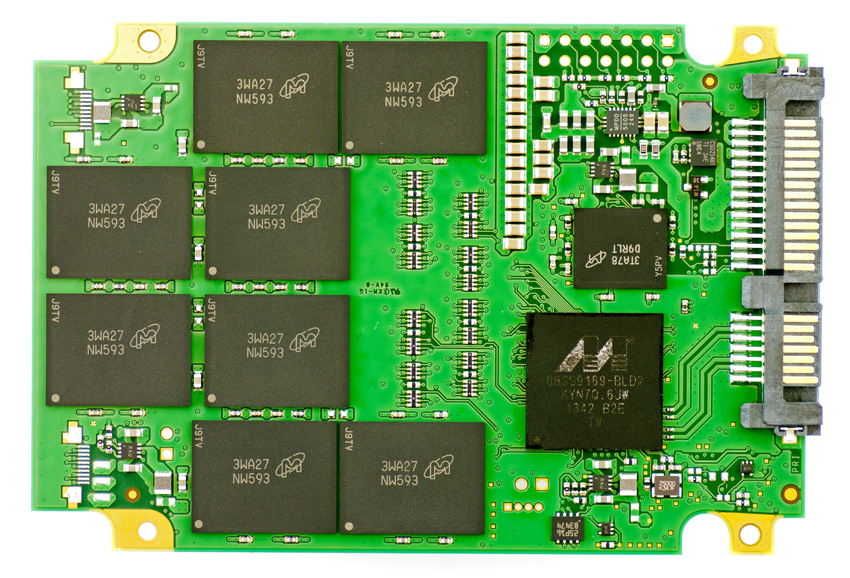 For read activity, M550 SSDs maintained their great performance, especially the 1TB model which took top place with its range of 7,333 IOPS up to a blistering 100,405 IOPS. 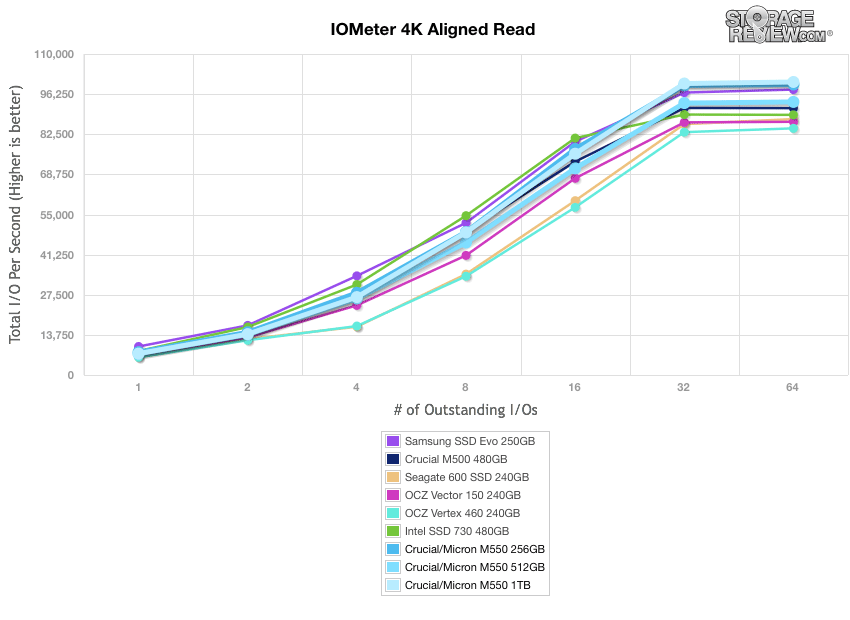 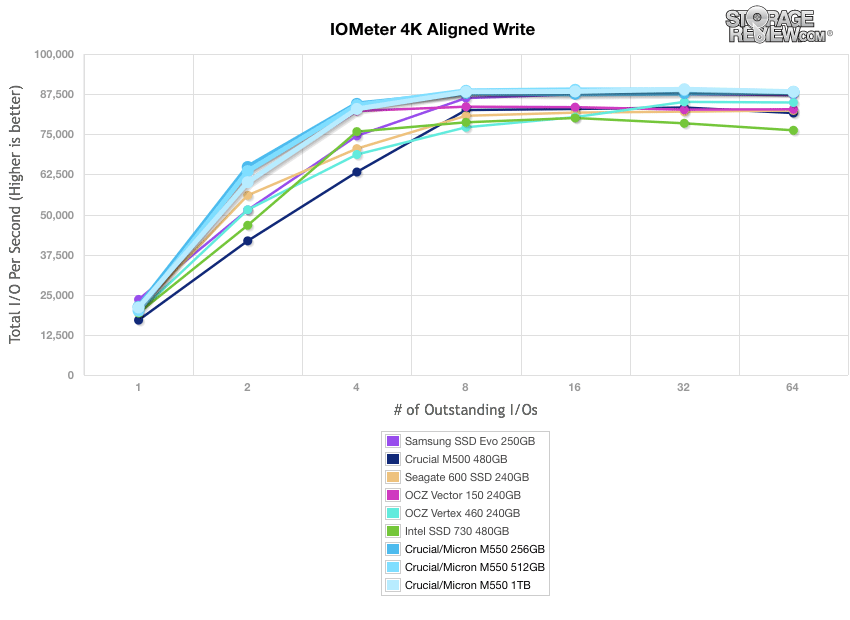 Comparing average write latency, the M550 SSDs performed all over the board with the 512GB model posting the best results of the family. 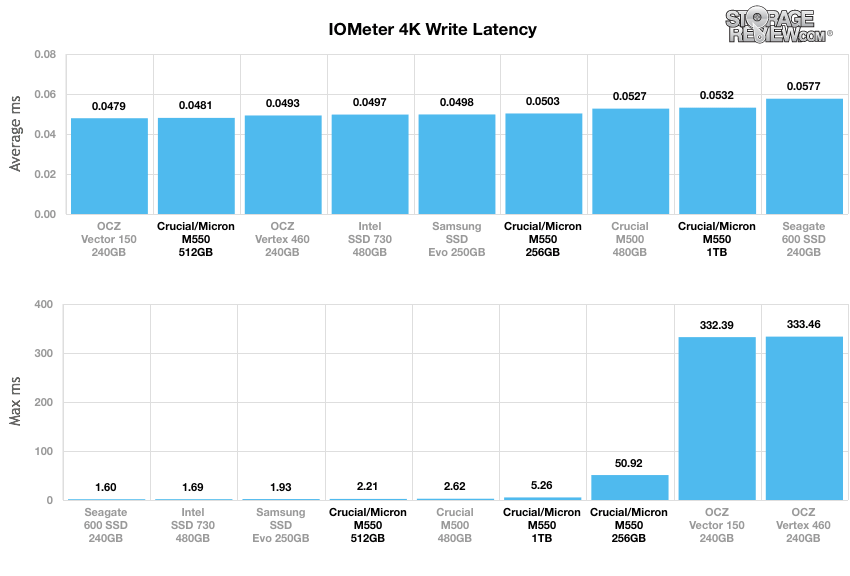 Our last series of synthetic benchmarks compare the hard drives in a series of server mixed-workloads with a queue depth of ranging from 1 to 128. Each of our server profile tests has a strong preference towards read activity, ranging from 67% read with our database profile to 100% read in our web server profile. In all of our mixed workloads, the M550 SSDs ranked anywhere near the upper middle to the lower part of the leaderboard. 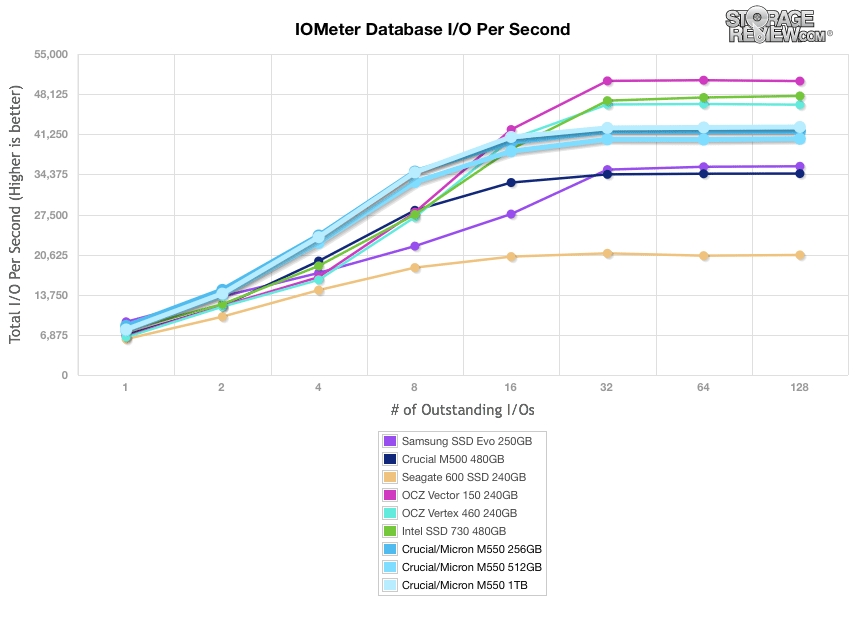 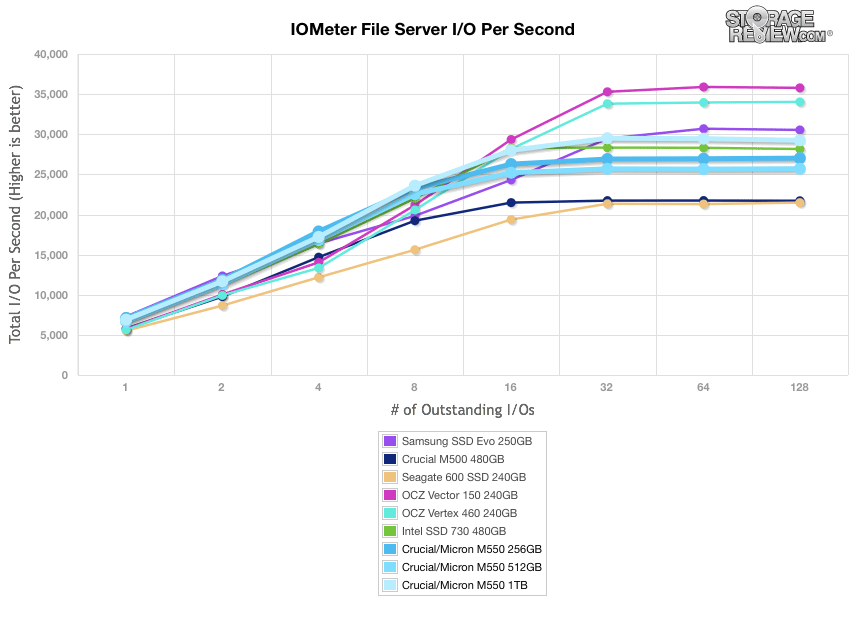 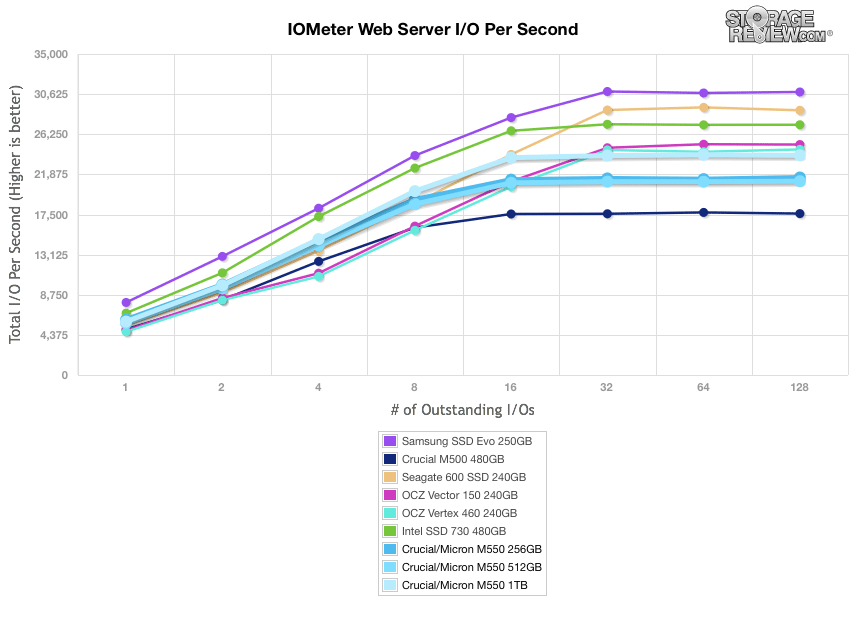 The last profile looks at workstation activity, with a 20% write and 80% read mixture using 8K transfers. By Q128, the M550 family performed near middle of the rankings. 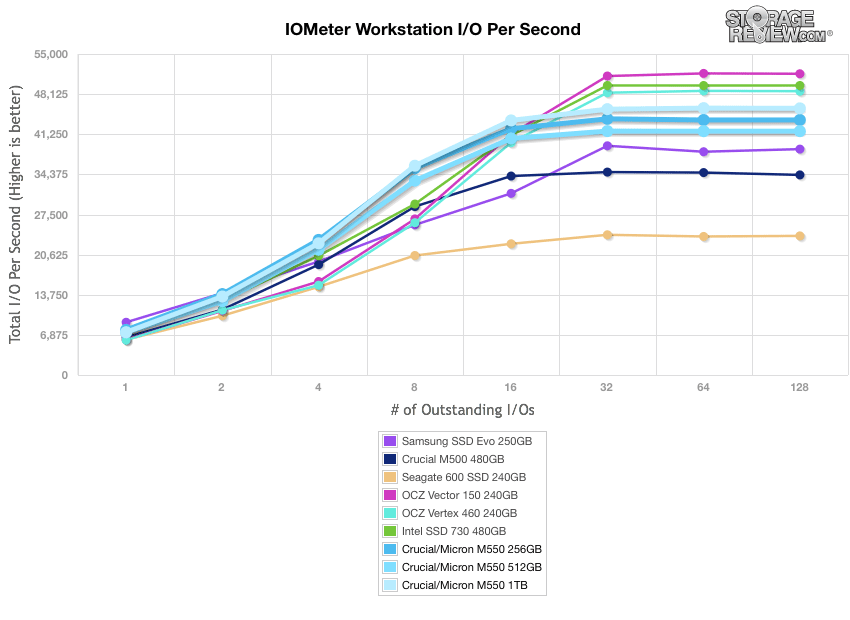 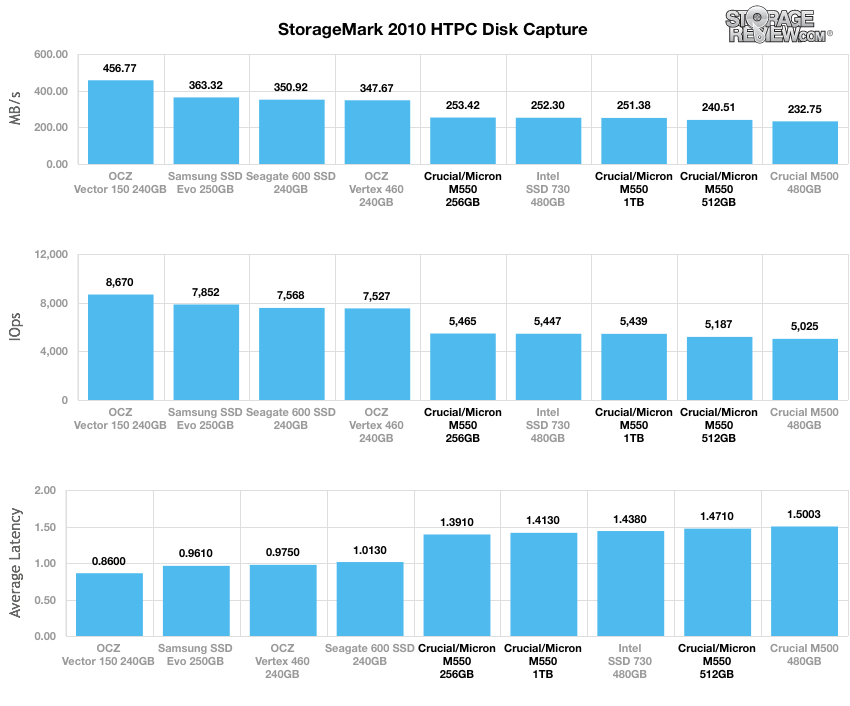 In our HTPC profile, the M550 family ranked at the lower middle and bottom of pack in all of our tests with the 512GB taking second last place in all of the categories.

In our Productivity trace, the M550 SSDs continued to struggle keeping up with the OCZ drives, coming it near the bottom of the pack only beating its M500 brethren and Intel drive. 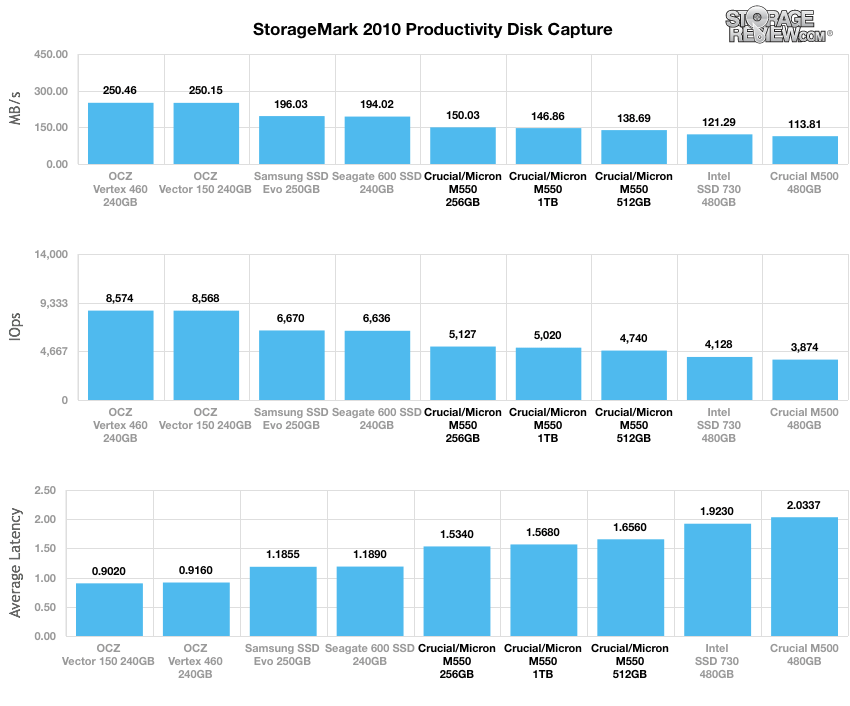 In our read-intensive Gaming trace, the M550 family of SSDs really picked up its performance, producing results right at the top of the pack with the 256GB model taking top spot in every category with a blistering 488.6MB/s and an IOPS of 9,250. 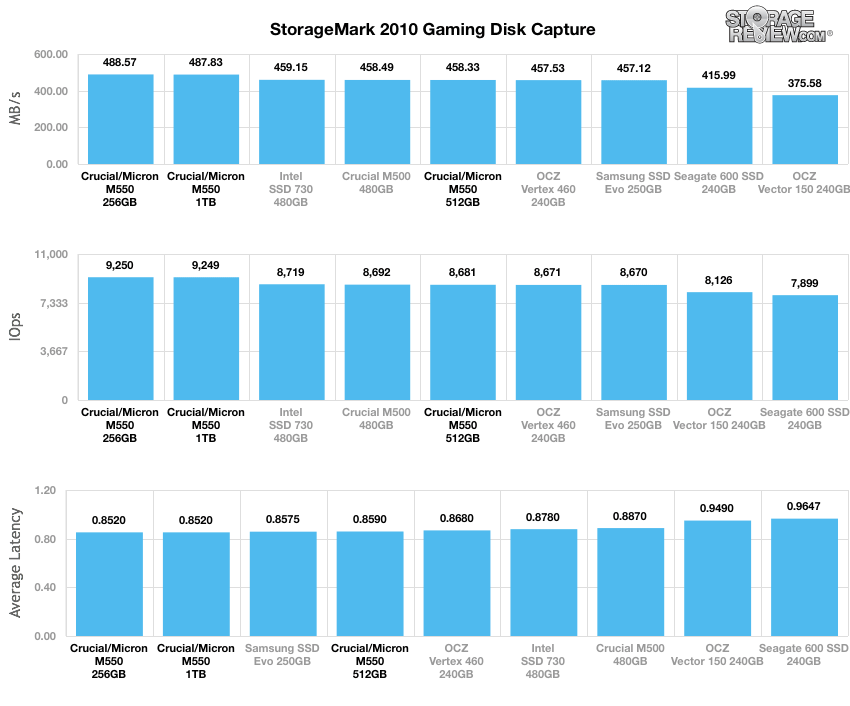 Low idle power consumption is a very important feature when it comes to SSDs and their overall  power management since they spend much of their life-time in an idle state.

The Crucial/Micron M550 line (Crucial for retail, Micron for OEMs) is designed as a high-performance SSD for enthusiasts and is equipped with SATA 6Gb/s, 20nm NAND, duty-optimized firmware and features the Marvell 88SS9189 controller. One of the biggest upsides to the M550 family is that it comes in three form factors in a variety of capacities in order to suit the needs of different enterprises and businesses: 2.5-inch, mSATA, and M.2 (64GB, 128GB, 256GB, 512GB, and 1024GB).

As far as performance goes, the Micron M550 SSDs performed very well in many of our tested categories and though it did outperform its M500 predecessor in virtually every category, the M550 is really only a modest improvement in most cases. In our real-world workloads, it generally performed below par, though it is proved to be the strongest performer in our read-intensive gaming benchmark. When measuring it's performance in single workloads, the M550 line placed in the upper echelon in 2MB sequential speeds, which remained in that way during our 4K tests. During our mixed workload performance benchmarks, the M550 ranked middle of the pack falling behind many of the other recently released SSDs from other vendors.

Overall, the Micron M550 family are decent line of performance SSDs. It's targeted to both businesses and consumer who require a drive capable of high-performance computing, though it doesn't really blow away the competition. That's been the Micron SSD M.O. though, the m4 and M500 before have shown to be capable and reliable SSDs, while generally not performance category leaders. Micron does offer these drives at a competitive price though, which combined with the pedigree of compatibility, reliability and endurance, makes for a compelling offering.

The Crucial/Micron M550 provides a progressive update over the M500, giving consumers and OEMs a drive platform with a lengthy history of reliability and endurance.