SanDisk designed the Extreme 500 to replace the functionality of a portable hard drive while providing enhanced transfer rates. The Extreme 500 is intended for photographers and videographers that need a fast portable drive that can tolerate heavy use and withstand more physical damage than a typical HDD. Users will be trading the superior capacity of an HDD for the speed and reliability of an SSD, with a maximum capacity of 480GB and top reported transfer rate of 430MB/s read.

SanDisk designed the Extreme 500 to replace the functionality of a portable hard drive while providing enhanced transfer rates. The Extreme 500 is intended for photographers and videographers that need a fast portable drive that can tolerate heavy use and withstand more physical damage than a typical HDD. Users will be trading the superior capacity of an HDD for the speed and reliability of an SSD, with a maximum capacity of 480GB and top reported transfer rate of 430MB/s read. 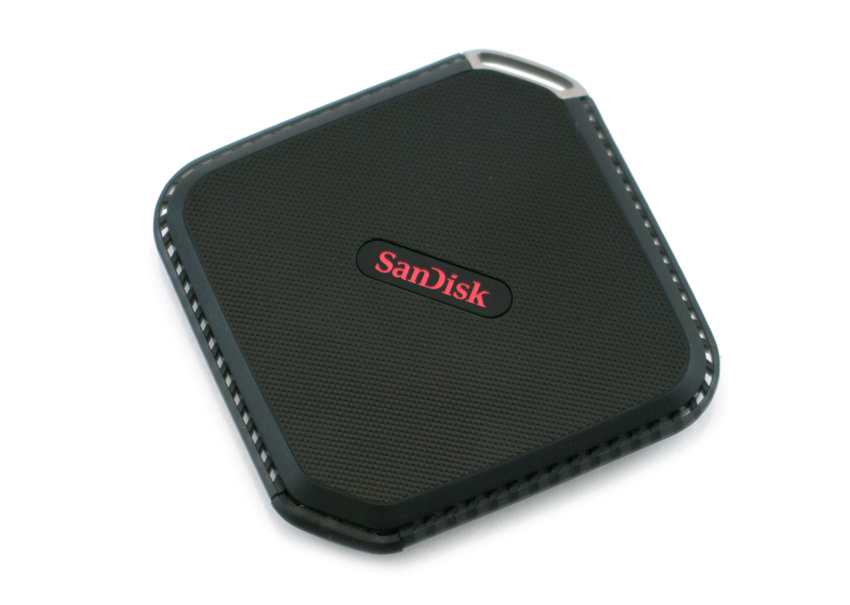 SSDs are not very prevalent in the portable market currently, with most portable drives housing HDDs. Most of the NAND memory that is currently implemented in portable use cases is found in USB drives, so larger-capacity SSDs are somewhat new to the portable storage market. Due to the many features of SSDs that make them less finicky than HDDs, consumers might see more portable drives like the Extreme 500 coming to market in the next few years. To elaborate, as with all SSDs, the Extreme 500 works without moving parts, making it resistant to shock and vibration damage, and extreme temperatures. Considering the abuse that portable devices take, choosing a portable drive that is less susceptible to physical damage is probably a safe bet.

SanDisk designed the Extreme 500 to be as small and sleek as possible, giving it a textured black chassis with bright red branding on the top. There is a bumper lining the outside to provide some extra padding. The bottom of the Extreme 500 has some basic product information and some texture for traction. 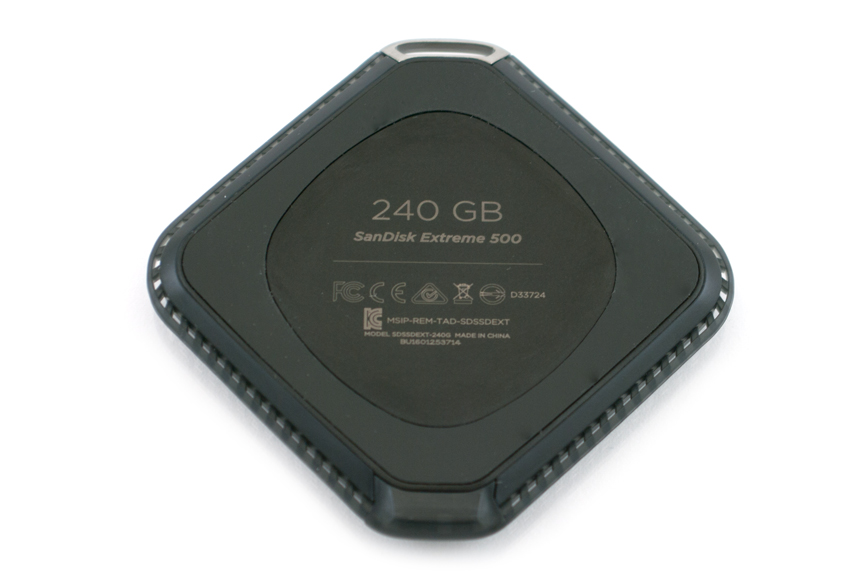 The only opening that the Extreme 500 has is its USB 3.0 port, which has a retractable opening to protect it from debris while not in use. There is also a keychain loop on the opposite side from the USB 3.0 port, which SanDisk has included in case users want to latch the drive onto a backpack or travel bag. 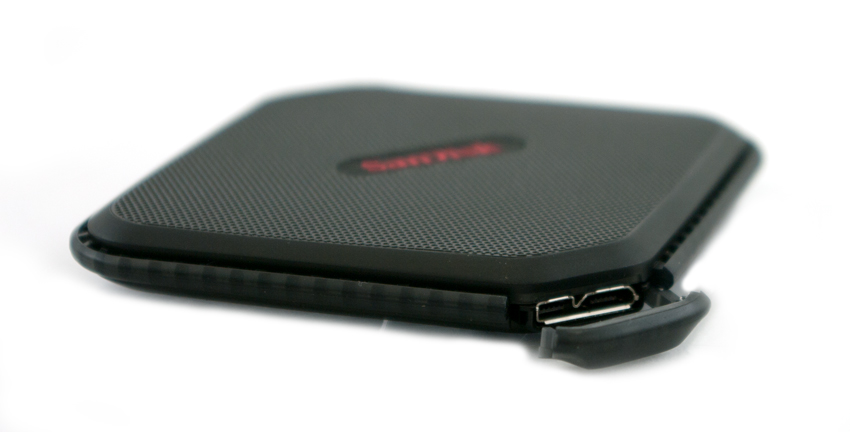 To test the performance of the SanDisk Extreme 500, we will cover three different areas of analysis: the BlackMagic disk speed test, 2MB sequential and random transfer speeds via IOMeter, and PCMark 8 storage testing with a Dell Precision 7150 mobile workstation. We will also be comparing the Extreme 500 to the Samsung Portable SSD T3, which is one of the Extreme 500's few competitors in the portable SSD market.

In our first benchmark, we will look at transfer speeds using a USB 3.0 connection on a current generation MacBook Pro. Here, we leveraged the BlackMagic disk speed test, which is a Mac-specific tool mainly used to see how well drives work with high quality video. In this test, the Extreme 500 posted 428.8MB/s read and 364.2MB/s write. The Samsung T3 barely outperformed the Extreme 500, with 430.0MB/s and 404.5MB/s in read and write, respectively. 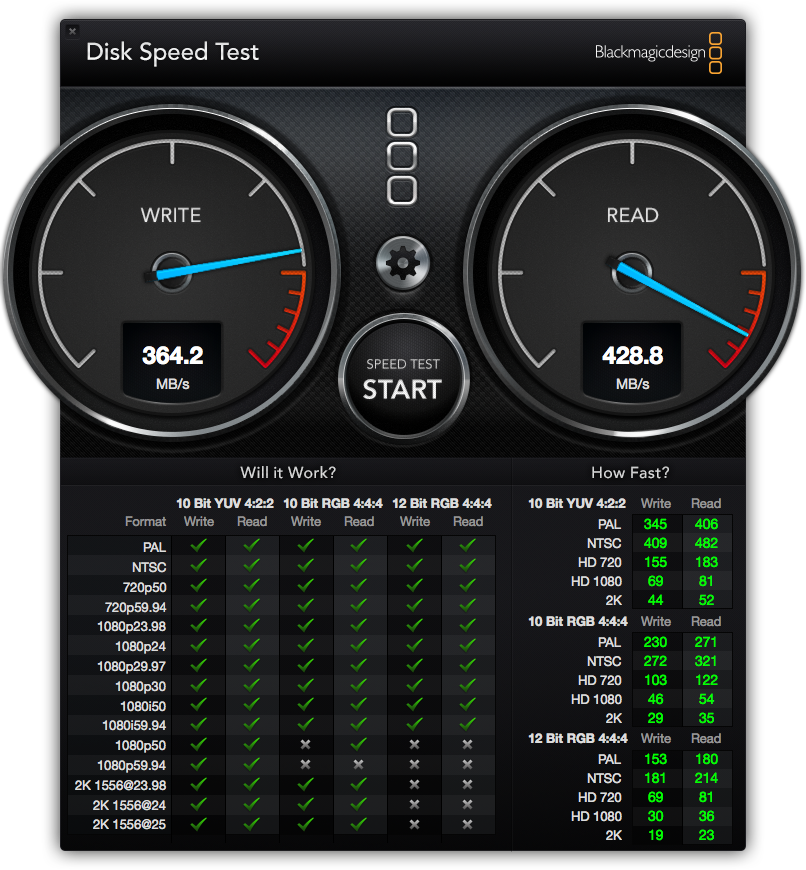 When looking at its 2MB sequential speeds without a filesystem leveraging IOMeter, the SanDisk Extreme 500 posted 304.0MB/s read and 112.7MB/s write. The Samsung T3 had similar numbers, with 322.52MB/s read and 159.13MB/s write. When switching to 2MB random transfers, the Extreme 500 had a significant drop in read performance (162.4MB/s) but maintained roughly the same write speed (110.3MB/s). The Samsung T3 handedly outperformed the Extreme 500 in this benchmark, posting 318.95MB/s and 158.28MB/s in read and write, respectively.

We also tested the SanDisk Extreme 500 with a Precision 7150, Dell’s new generation, high-performance mobile workstation. To measure its performance on the 7150, we installed PCMark. This tool essentially calculates the performance at the system- and component-level and most often represents typical user workloads. We measured a total bandwidth of 86.56MB/s during this benchmark, which falls below that of the Samsung T3 (207.18MB/s).

The Extreme 500 represents SanDisk's attempt to get a jumpstart on the new portable SSD market. Although SSDs are relatively lacking in capacity, they make much more sense as a portable drive than HDDs because of their inherent durability and lack of moving parts. SanDisk designed the Extreme 500 to be extra durable so that it can withstand the heavy use often seen with photographers and videographers.

Although it fell below the Samsung T3 in our performance benchmarks, the Extreme 500 still has a lot to offer to consumers, most notably its durability. It is also slightly less expensive than the Samsung T3. In the grand scheme of things, the Extreme 500 performed quite well, keeping up with most performance-based USB drives and outpacing most portable HDDs on the market. In the BlackMagic test we saw the Extreme 500 give us 364.2MB/s write and 428.8MB/s read. Our IOMeter benchmark gave us readings as high as 304.0MB/s read and 112.7MB/s write. And with PCMark we saw a bandwidth of 86.56MB/s.

The Extreme 500 provides enhanced durability and SSD performance for photographers, videographers, and storage enthusiasts who wish to depart from the typical HDD configuration for their portable storage device.