The SanDisk Extreme PRO SSD is designed specifically for gamers, PC enthusiasts, and media professionals who require consistent, top-in-class real-world performance out of their storage. With its quoted sequential read speed of 550MB/s and write speed up to 520MB/s, the SanDisk’s new Extreme PRO certainly is specced to deliver the performance needed for graphics-intensive applications in addition to speedy gaming load times. The Extreme PRO also boasts an industry first a 10-year warranty to assuage any concerns about the drive's expected longevity and SanDisk's commitment to the drive.

The SanDisk Extreme PRO SSD is designed specifically for gamers, PC enthusiasts, and media professionals who require consistent, top-in-class real-world performance out of their storage. With its quoted sequential read speed of 550MB/s and write speed up to 520MB/s, the SanDisk’s new Extreme PRO certainly is specced to deliver the performance needed for graphics-intensive applications in addition to speedy gaming load times. The Extreme PRO also boasts an industry first a 10-year warranty to assuage any concerns about the drive's expected longevity and SanDisk's commitment to the drive. 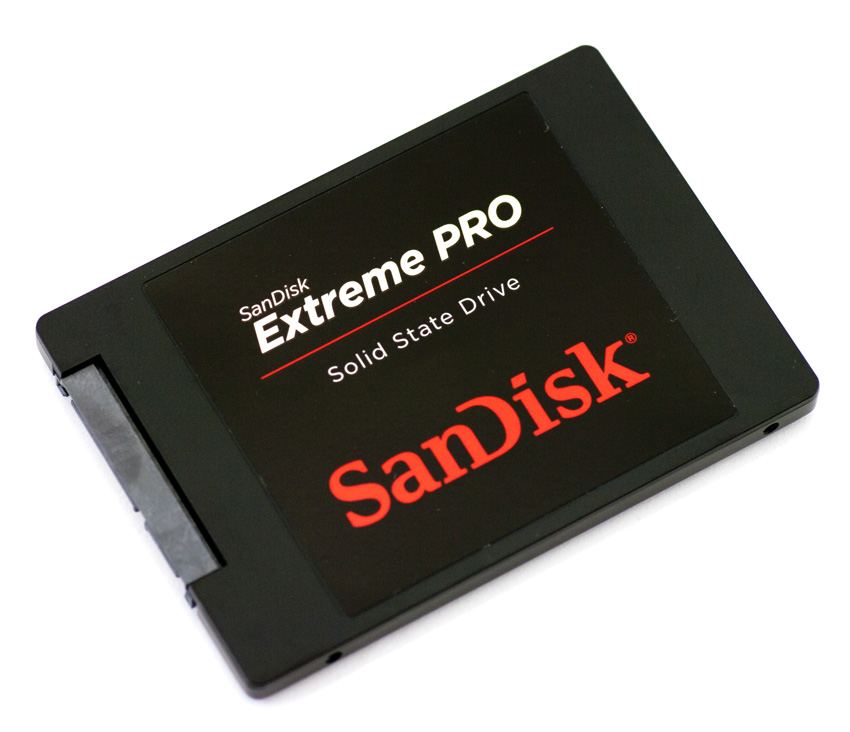 The SanDisk Extreme PRO’s 7mm form factor is nearly identical to other SanDisk SSDs (such as the Extreme II), the only difference being the branded product name. It has a smooth and refined black metal enclosure with SanDisk’s usual gold, black and red color scheme. SanDisk's durable aluminum case is specifically designed to resist shocks and vibrations, preserving the integrity of user data.

The reverse side of the SanDisk Extreme PRO shows off the product information sticker, providing all the relevant information the user needs (i.e. capacity, serial number, etc.). Mounting is done using the four screw holes (two per side) which allows the Extreme PRO to be easily mounted. 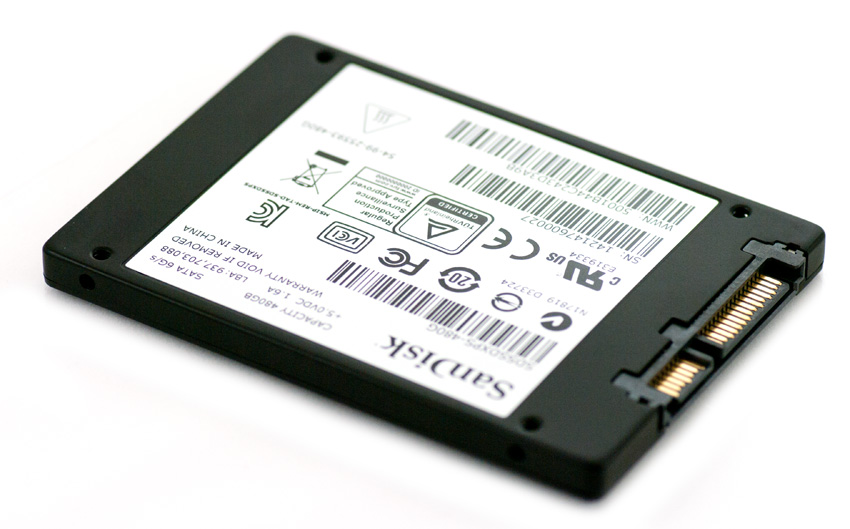 At the heart of the SanDisk SSD is the Marvell 9187 controller as well as SanDisk MLC NAND. SanDisk writes their own firmware for the drive. 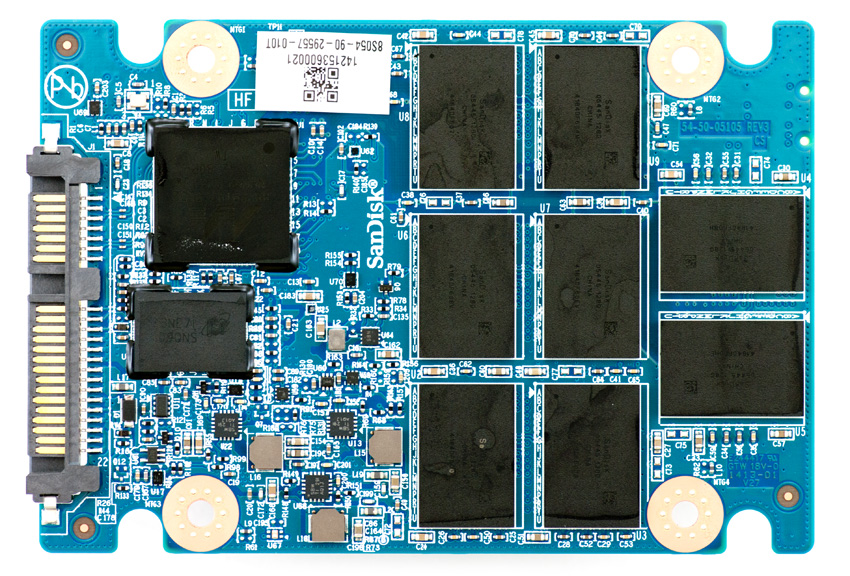 Our first test measures 2MB sequential performance. Both the SanDisk Extreme PRO 480GB and 960GB performed very well, posting nearly identical results with reads of 512.8/513.0MB/s, respectively, and writes of 443.9/449.4MB/s, respectively. Both models were near the top of the leaderboard in the read column, just behind the Corsair Force LX and towards the middle of the pack in write speeds.

Moving to our 2MB random transfer performance tests, the Extreme PRO 480GB scored 397.3MB/s read and 457.1MB/s write, while the 960GB model posted 396.2MB/s read and 444.1MB/s write. The read activity of the two new SanDisk drives rank at the bottom of the pack while the write scores were in the upper middle.

Comparing write latency, the Extreme PRO SSDs ranked near the top of the leaderboard for average latency but in the middle for max latency. 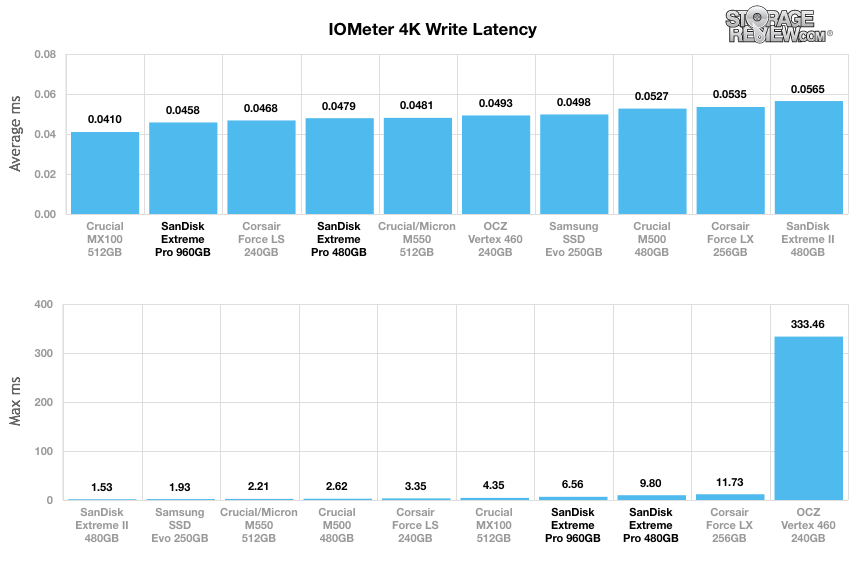 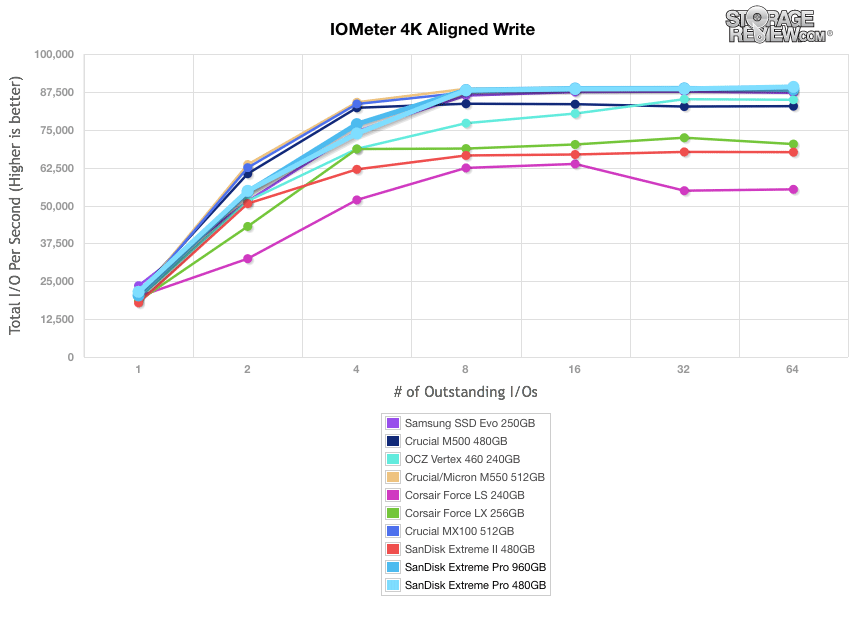 The Extreme PRO SSDs showed off their great performance again in aligned read activity, posting a blistering 98,681IOPS and 98,737IOPS by the 64QD for the 480GB and 960GB, respectively. Once again, both drives ranked at the top of the pack. 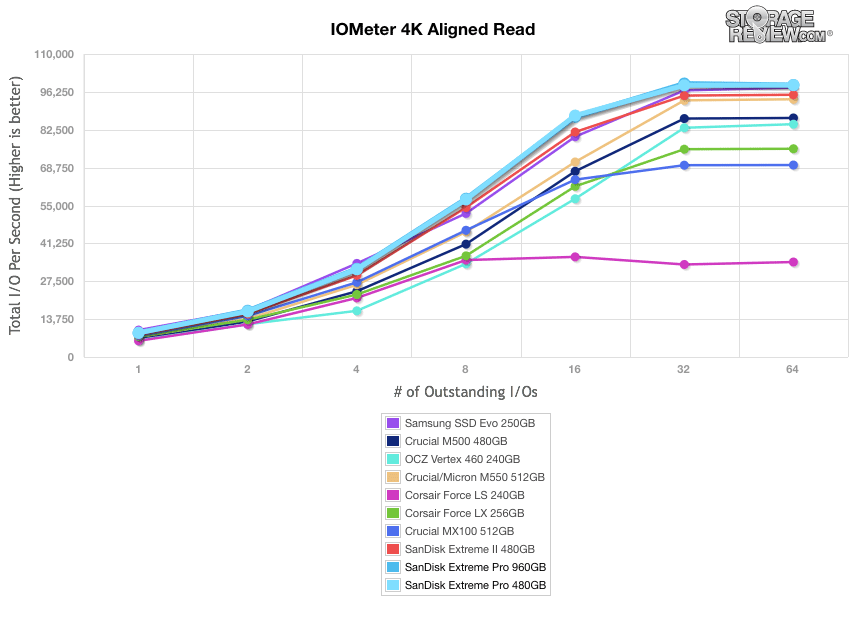 Our last series of synthetic benchmarks compare the hard drives in a series of server mixed-workloads with a queue depth of ranging from 1 to 128. Each of our server profile tests has a strong preference towards read activity, ranging from 67% read with our database profile to 100% read in our web server profile. In all of our mixed workloads, the SanDisk Extreme PRO SSDs ranked anywhere from the bottom to the upper part of the pack.

The first is our database profile, which consists of 67% read and 33% write workload mix primarily centered on 8K transfer sizes. For this benchmark, the SanDisk Extreme PRO drives boasted Q128 results of 29,020 and 28,940 IOPS for the 480GB and 960GB respectively. 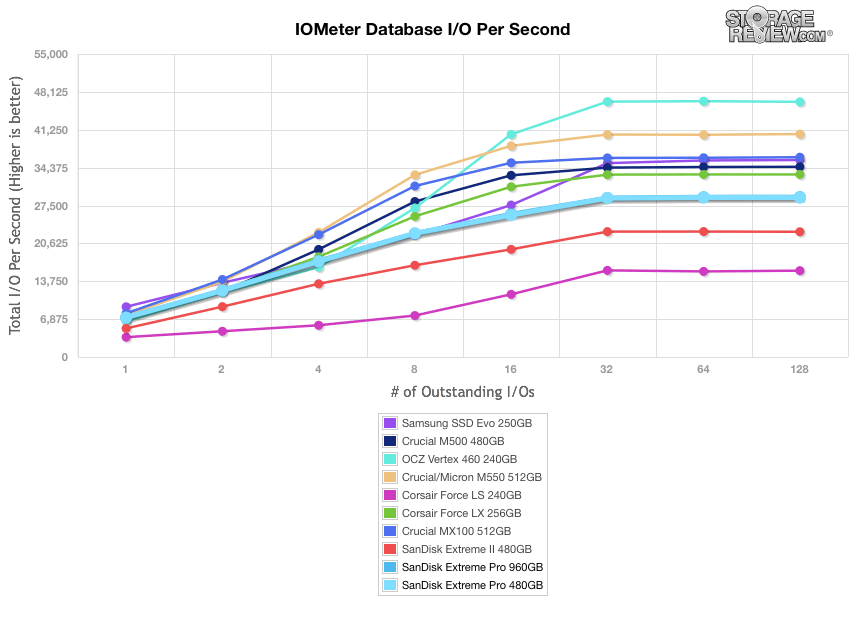 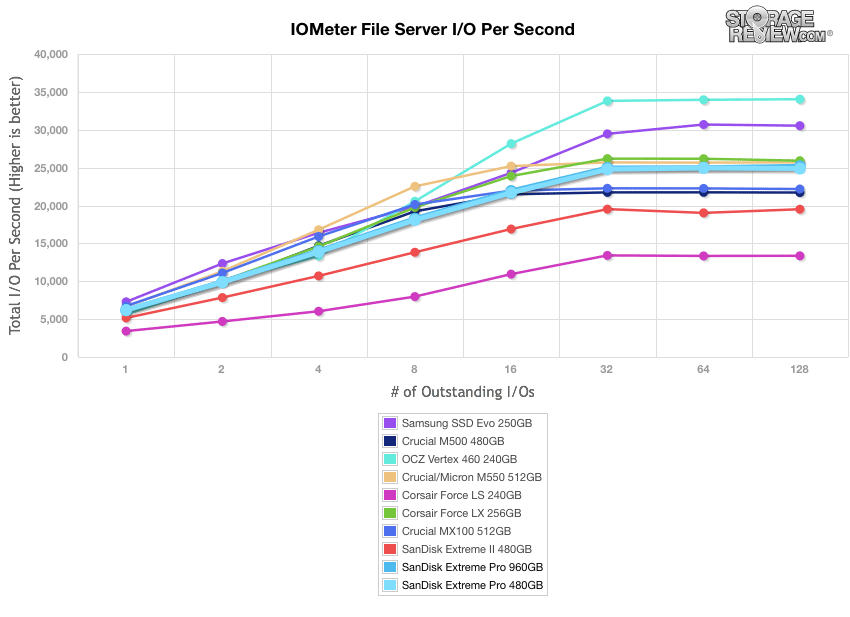 Our web server profile is read-only with a spread of transfer sizes from 512-byte to 512KB. The Extreme PRO SSDs ranked at the top of the pack, just behind the Samsung Evo. 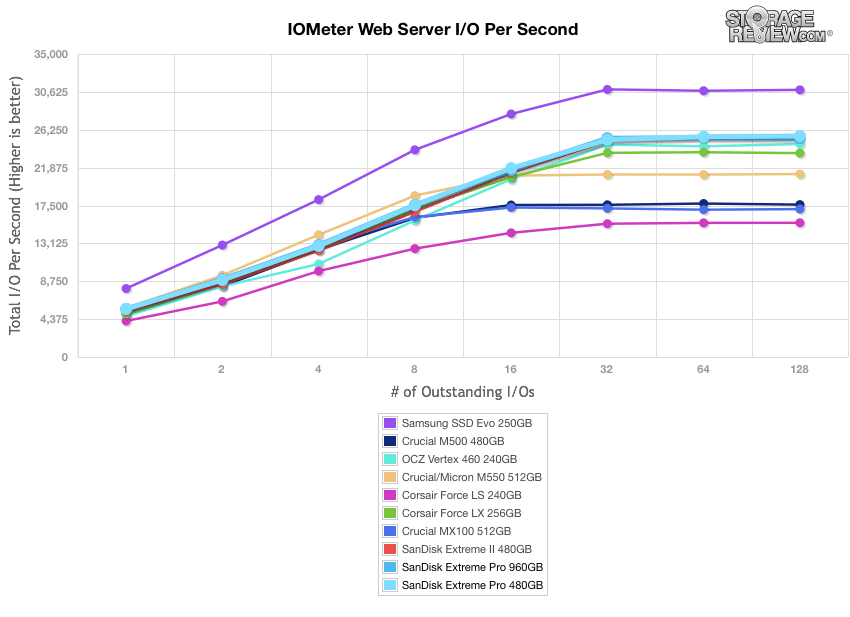 The last profile looks at workstation activity, with a 20% write and 80% read mixture using 8K transfers. By Q128, the two SanDisk Extreme PRO SSDs performed near the bottom of the pack. 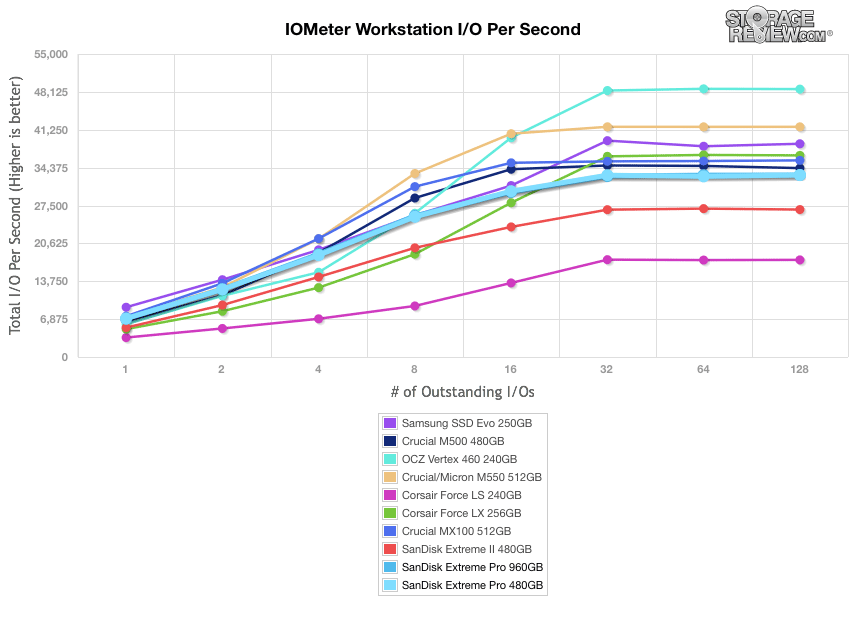 The first real-life test is our HTPC scenario. In this test we include: playing one 720P HD movie in Media Player Classic, one 480P SD movie playing in VLC, three movies downloading simultaneously through iTunes, and one 1080i HDTV stream being recorded through Windows Media Center over a 15 minute period. Higher IOps and MB/s rates with lower latency times are preferred 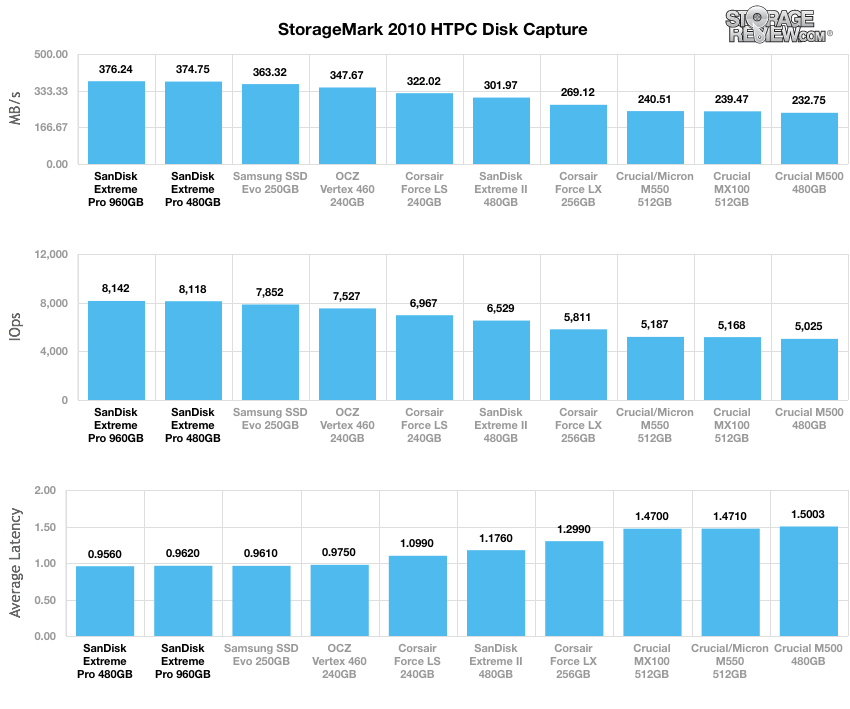 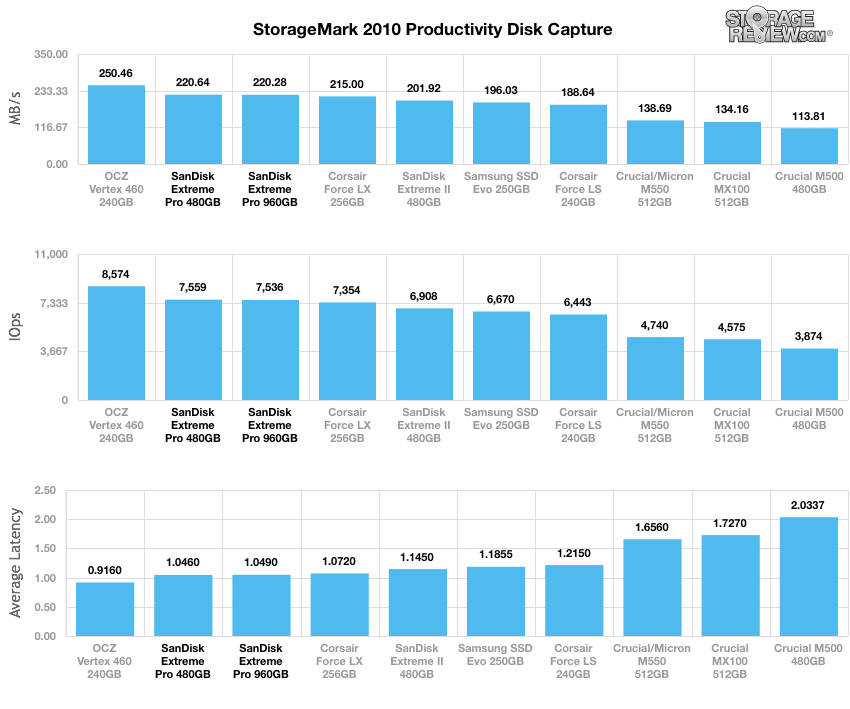 In our Productivity trace, the two SanDisk Extreme PRO SSDs continued its great performance, coming in right at the top of the pack, just behind the OCZ Vertex 460 240GB. 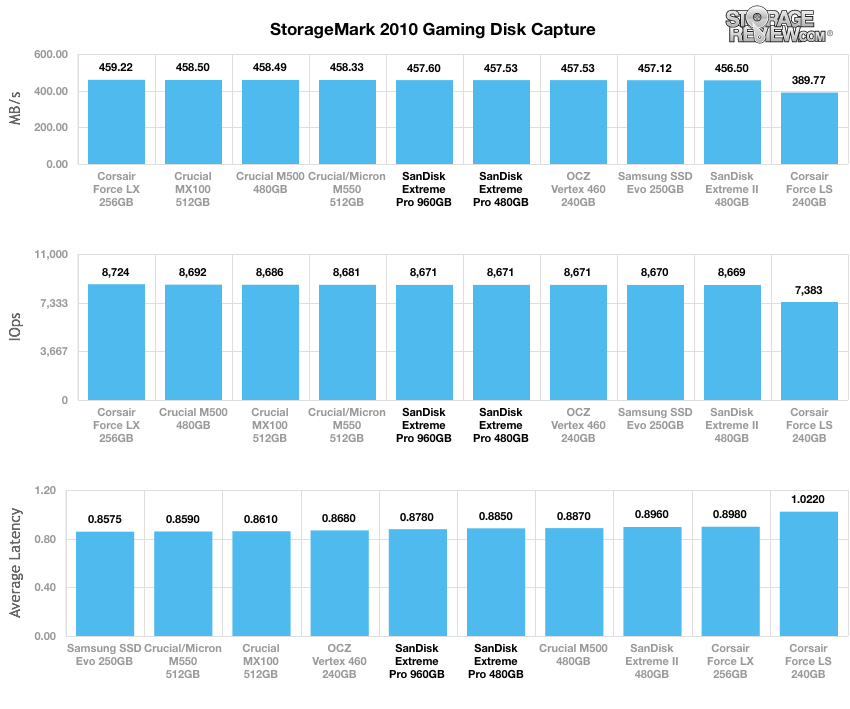 Low idle power consumption is vital when it comes to SSDs as most of their lifespan is in the idle state.

The SanDisk Extreme PRO line of SSDs is designed as a high-performance drive for gamers, PC enthusiasts, and media professionals who require consistent, top-in-class real-world performance. In order to cater to their target demographic, SanDisk quotes impressive reads up to 550MB/s and writes up to 515MB/s and is equipped with the Marvell 9187 controller with custom firmware and SanDisk's MLC NAND. As far as pricing goes, the new Extreme PRO line is competitive across all capacities compared to others in its class.

When looking at its performance in greater detail, it wasn't a surprise to see that the SanDisk Extreme PRO posted top-in-class results in most of our application and synthetic benchmarks. In our synthetic tests, the Extreme PRO SSDs were at the top of the leaderboards in our 4K random read and write performance benchmarks and the top performer in our 8k 70/30 workload. The new SanDisk SSDs were also the best of the bunch in our 2MB sequential workload. In our random benchmark of the same size, however, the drives posted read activity near at the bottom of the pack. The write scores were placed in the upper middle echelon.

Our consumer real-world benchmarks are where the new SanDisk SSD really showed off its capabilities by demonstrating some seriously impressive results in all of our scenarios. This was particularly the case in our HTPC profile, where it boasted an IOPS of 8,118/8,142 and 374.8/376.2MB/s for the 480GB model and 960GB model, respectively, outperforming even the incomparable Samsung EVO by a noticeable margin. Additionally, it had no trouble ranking near the top of the pack in our gaming scenario, which wasn’t surprising as SanDisk indicated that their new drive was catered to the hardcore gamer demographic. All in all, this drive definitely delivered on the performance front.

Its very reasonable price tag coupled with its unique nCache Pro technology shows that the Extreme PRO can certainly deliver high performance at a consistent rate at a great value.