When SanDisk invested $327 million to acquire Pliant one thing was clear; SanDisk saw an opportunity to leverage their expertise in NAND and storage with Pliant’s SAS controller knowledge and storage technologies to create class-leading enterprise SSDs that would excel in both performance and reliability. The current result is the SanDisk Lightning enterprise SSD family that includes both MLC and SLC SAS 6Gb SSDs.

When SanDisk invested $327 million to acquire Pliant one thing was clear; SanDisk saw an opportunity to leverage their expertise in NAND and storage with Pliant’s SAS controller knowledge and storage technologies to create class-leading enterprise SSDs that would excel in both performance and reliability. The current result is the SanDisk Lightning enterprise SSD family that includes both MLC and SLC SAS 6Gb SSDs.

While it may be unique to market SLC and MLC SSDs under the single Lightning umbrella, SanDisk sees this as a benefit. To make qualifications more simple, all six drives (three MLC and three SLC) use the same firmware binary, controller and hardware components. They also offer a series of enterprise-grade features like write-through logging, support for T10 DIF and background error correction that is transparent and doesn’t impact performance. Read on through the features list though and second from the bottom is a nugget surrounding endurance.

While many have posted heady claims about write endurance, SanDisk goes one further with this note, "Lightning SLC NAND SSDs do not impose a daily limit on the amount of writes." Not only that but SanDisk rates the drives for 5+ years, which considered against the other SAS drives in the enterprise market, puts the Lightning on top for both endurance and longevity. To be fair, we’d expect other enterprise SSDs to be chugging along well after their 5 year warranties are up, but even so, SanDisk shows just how confident they are when it comes to write amplification and NAND management. 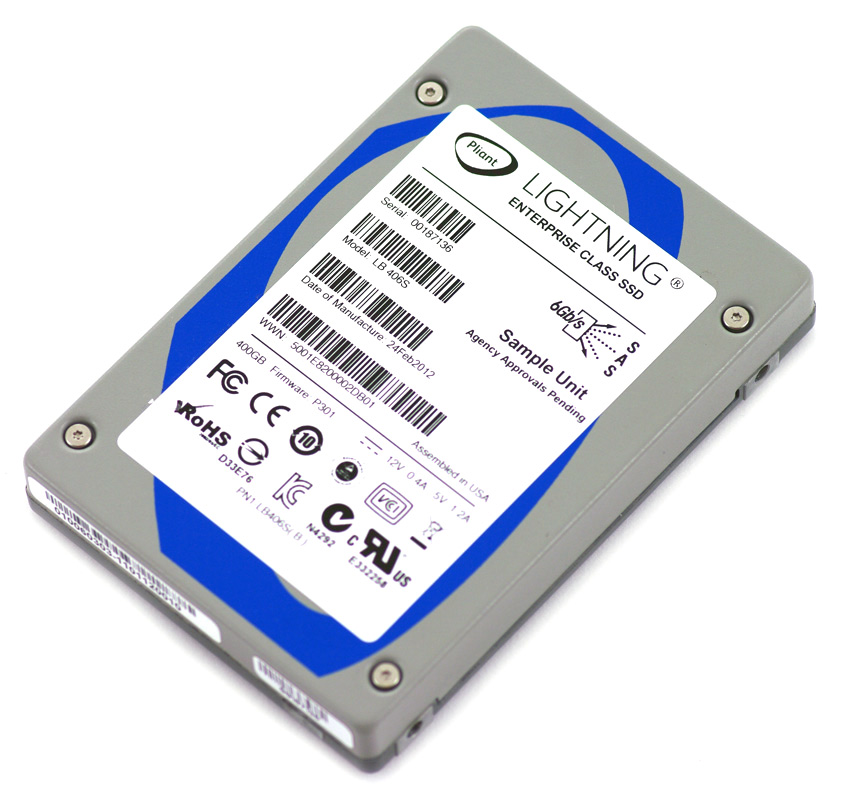 The SanDisk Lightning enterprise SSD offers an interesting and rather unique design for the enterprise server market. The case features a multi-tone grey paint scheme, with the blue Pliant brand ID displayed prominently across the top cover. The outside of the SSD includes multiple labels, including barcode stickers on the top cover and rear panel to keep track of the drive in storage or once deployed. The top sticker includes important information such as serial number, model number, date of manufacturer, capacity, firmware revision as well as the multitude of certifications the SSD carries. The serial number is included on both the top and rear panels for identification.

The metal-alloy body feels incredibly rugged, having an official weight of 238 grams, indicating plenty of mass inside from both electronic components and thermal dissipation materials. SanDisk gives the Lightning Enterprise SSD a peak operating temperature envelope of 60C, which is pretty high, although not the highest rated enterprise SSD we have reviewed. Some models can cope with temperatures as high as 70C.

The side profile of the SanDisk Lightning Enterprise SSD shows off the two-tone paint scheme, as well as the horizontal mounting screw holes.

The front of the Lightning Enterprise SSD includes just the dual-link 6.0Gb/s SAS connector and to show when the connection is active, the Lightning also features an activity light on the rear panel.

Powering the SanDisk Lightning LB 406S is the Pliant PTHEMI2-1VO controller. The controller is actually partially exposed when the SSD is together, underneath the aluminum sticker on the bottom of the case. 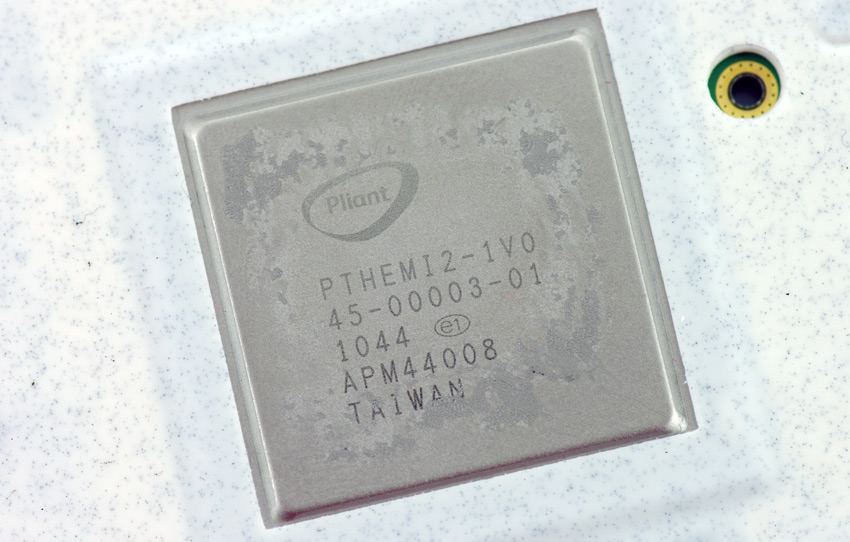 To help explain the NAND layout and where the Lightning LB 406S gets is high-load performance, SanDisk provided basic architecture overview of the SSD. SanDisk uses Micron 34nm SLC NAND inside the Lightning LB 406S. While it might be a surprise given SanDisk manufacturers their own NAND, it’s important to remember that this SSD was designed by Pliant before it came under the SanDisk name. The layout consists of sixteen 8GB NAND pieces spread out over 4 circuit board sides, totaling 512GB. Of that amount, 400GB is for the end-user while the rest is reserved for wear leveling and NAND failures.

Compared to other enterprise SSDs on the market, the SanDisk Lightning has a rather unique construction of three circuit boards permanently connected with flexible ribbon cables. The sections fold over each other, sandwiching the assembly together with thermal pads to shed heat into the metal body of the SSD. Shown below are the inward and outward facing layers making up the SanDisk Lightning LB 406S. 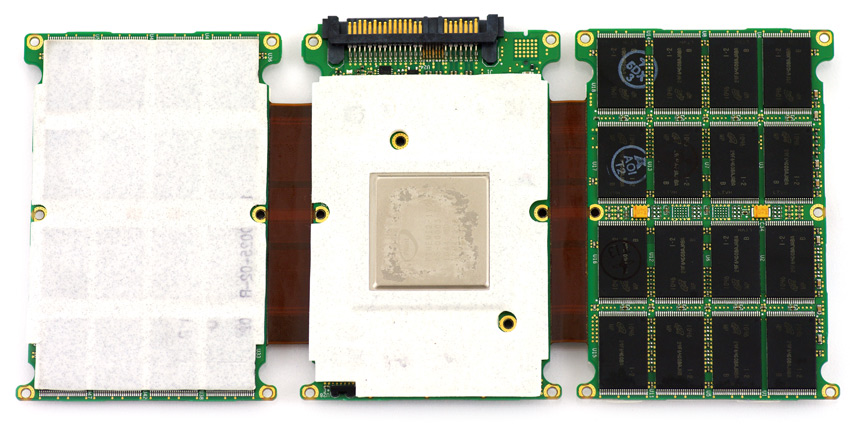 Our first test looks at the sequential read and write speed with large block transfers. This particular test uses a 2MB transfer size with IOMeter, with 4k sector alignment and measures performance with a queue depth of 4. In this scenario SanDisk claims a maximum read speed of 420MB/s but no write speed for their 400GB Lightning LB 406S.

We measured a sequential pre-conditioned large-block read speed of 413.82MB/s, with a steady-state write speed of 311.51MB/s from the Lightning LB 406S.

Moving to an even smaller random access transfer size of 4K, we get closer to the packet size that might be found in a heavy random access environment such as a server setting with multiple VMs accessing the same array. In the first test we look at expanded 4K read performance and how it scales from a queue depth of 1 to a maximum of 64. 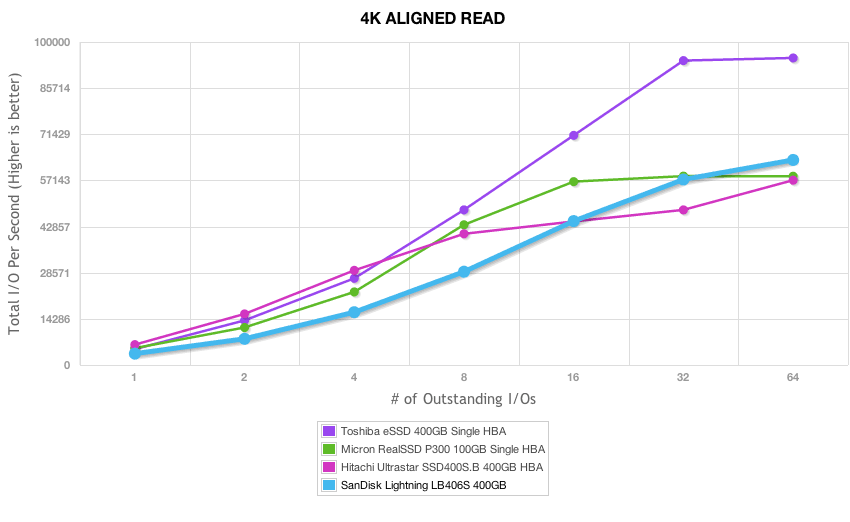 In the constraints of a queue depth between 1 and 64, the SanDisk Lightning LB 406S trailed slightly behind the Micron RealSSD P300 and Hitachi Ultrastar SSD400S.B until a queue depth of 32 where it was able to surpass them. At a queue depth of 64, it came in second to the Toshiba MKx001GRZB, with a random 4K read speed topping at 63,482 IOPS.

Our next test looks at 4K random write performance at a static queue depth of 32 and results are recorded and averaged once the drives have reached steady-state. While IOPS performance is a good metric to measure steady-state performance, another key area of interest is around average and peak latency. Higher peak latency figures can mean certain requests can backed up under heavy continuous access. At a queue depth of 32, we found that 4K random write performance leveled off, and averaged a speed of 19,220 IOPS. At this speed it recorded an average latency of 1.66ms and a peak latency of 52.91ms over the duration of the test. In our fileserver workload, the SanDisk Lightning LB 406S again offered the highest transfer speed, measuring 23,083 IOPS with an average latency of 1.39ms. Further increasing the queue depth load to 64, we noted an increase to 25,334 IOPS, with latency measuring 2.53ms. In our web server workload profile, the SanDisk Lightning came in second to the Toshiba MKx001GRZB, measuring 22,320 IOPS with an average latency of 1.43ms. Increasing the queue depth to 64, the Lightning was able to push 23,801 IOPS with a transactional latency of 2.69ms 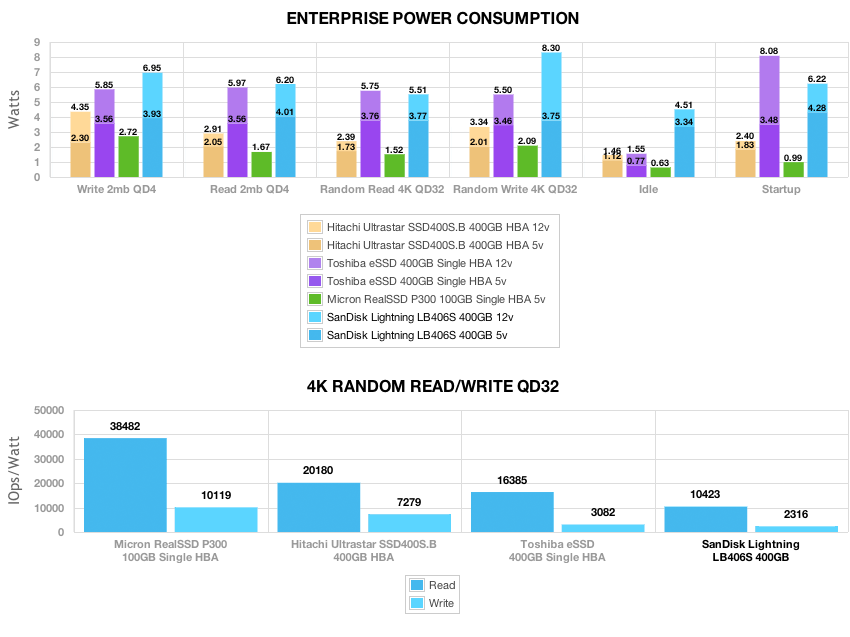 Under all conditions except start-up, the SanDisk Lightning LB 406S used 8.30 watts or less. This was slightly more than SanDisk claimed of 5.9 watts typical, although depending on the exactly workload applied this could vary. The most power hungry activity for the LB 406S was random QD32 4K write, using 8.30 watts averaged over the duration of the test. Second was sequential QD4 write using 6.95 watts, third was sequential QD4 read using 6.20 watts followed by 4K QD32 steady read coming in fourth needing 5.51 watts.

The original Pliant drives were outstanding not only when first released, but even today, which makes it all the more obvious why SanDisk wanted Pliant, their IP and the engineering team brought in-house under the SanDisk umbrella. The SanDisk/Pliant Lightning LB 406S showed tremendous throughput in our tests and really excelled in all of our workload profiles. Thinking forward to the next iteration of Lightning SSDs, there’s a tremendous amount of potential given the base that already exists and the new NAND knowledge, components and storage expertise that SanDisk can infuse.

When compared to the other SLC NAND enterprise SSDs in our lab, the SanDisk Lightning LB 406S offered the best performance in situations with mixed-workloads weighted down with write-activity. In our 100% read or 100% write synthetic benchmarks, the Lightning offered strong performance, but it really shined in areas with a mixture of read and write activity that generally brought other drives down.

The Lightning LB 406S also offered strong performance in areas where the workload transfer-size varied greatly, shown in our File Server benchmark with packet sizes varying between 512-byte and 64KB. In our tests with a queue depth limit of 32, the SanDisk Lightning LB 406S led in the Database and File Server profiles against the other SLC-based enterprise SSDs. In the Web Server and Workstation profiles it came in second to the Toshiba MKx001GRZ. If you pushed the queue depth to 64, it was able to still pick up steam and gain additional throughput, but at the disadvantage of also increasing latency. Overall the SanDisk Lightning LB 406S offered class-leading performance in many of our tests compared to other enterprise SSDs, with the unique advantage of SanDisk backing the SLC-equipped Lightning models with unlimited writes over the warranty duration.

The SanDisk Lightning SSD is not exactly the latest and greatest tech, but even so, our SLC-based Lightning LB 406S eprformed very well throughout, posting excellent mixed-workload performance, improving as more writes were injected. The drive’s performance makes us that much more excited for the next generation SSD where the full benefit of the Pliant/SanDisk relationship can be realized.