Shrinking dimensions in the ultrathin computing market have threatened to push hard drives to the side in favor of higher performing and more battery friendly SSDs. At only 7mm high and featuring a new single-platter design, Western Digital’s updated Scorpio Blue hard drive line is engineered for maximum mobile appeal for those who still need bulk storage in their ultrathin devices.

Shrinking dimensions in the ultrathin computing market have threatened to push hard drives to the side in favor of higher performing and more battery friendly SSDs. At only 7mm high and featuring a new single-platter design, Western Digital’s updated Scorpio Blue hard drive line is engineered for maximum mobile appeal for those who still need bulk storage in their ultrathin devices.

As a hard drive, WD’s Scorpio Blue has inherent advantages over an SSD for primary storage, which are highlighted by capacity and price. WD has added new energy efficiency and shock tolerance features to Scorpio Blue in hopes of leveling the playing field for two areas where hard drives usually have trouble keeping up. While designed to fit within 7mm Ultrabook bays, this drive is also still compatible with standard 9.5mm mobile drive bays, keeping Scorpio Blue’s options open with larger notebooks. 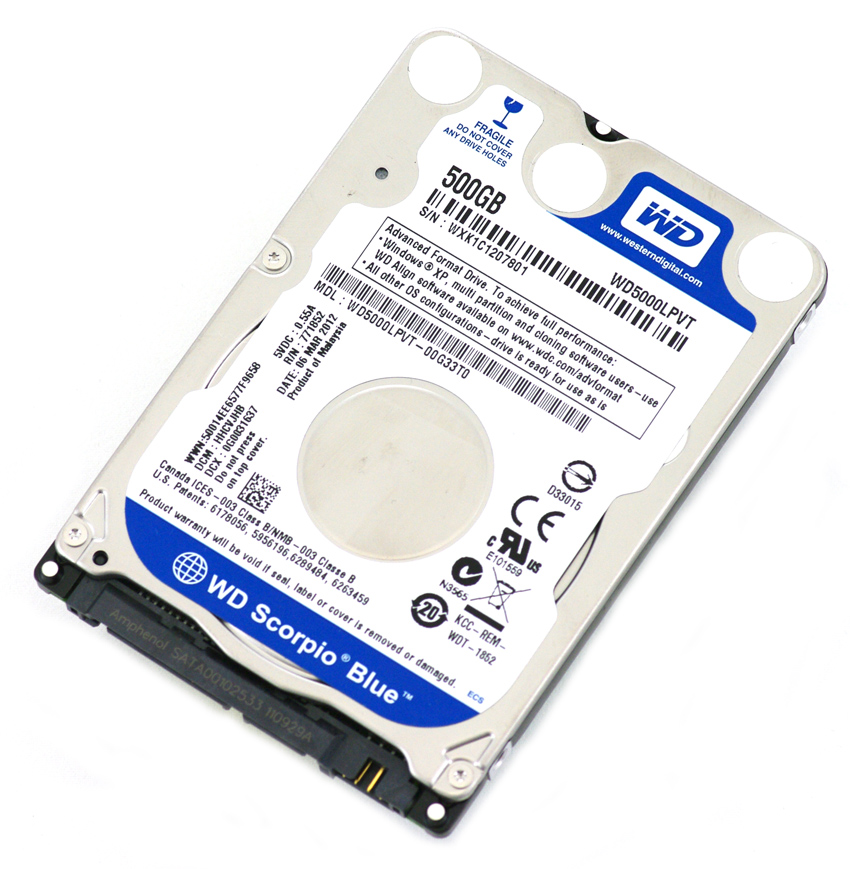 The first thing that will strike you when looking at the new Scorpio Blue is of course, just how much smaller it is than standard mobile hard drives. The critical decrease from 9.5mm to 7mm tall makes all the difference in the Ultrabook market, where designs demand the slimmer dimensions a 7mm drive allows.

Much like WD’s updated VelociRaptor, the Scorpio Blue features a controller PCB layout that presses the drive’s hottest components to the drive chassis. One benefit to this layout is heat dissipation, and another that is just as important for Scorpio Blue is added protection against physical jolts.

Western Digital’s Scorpio Blue is built with a single platter, which is how WD has been able to achieve 7mm size and helps WD to guarantee 400Gs in shock tolerance, a selling point for its mobile applications. WD’s SecurePark technology keeps recording heads off the platter surface when not needed in order to better ensure that the recording head never touches the disk surface. This should result in less head wear during the operating life of the unit, and it also equals improved non-operational shock tolerance. 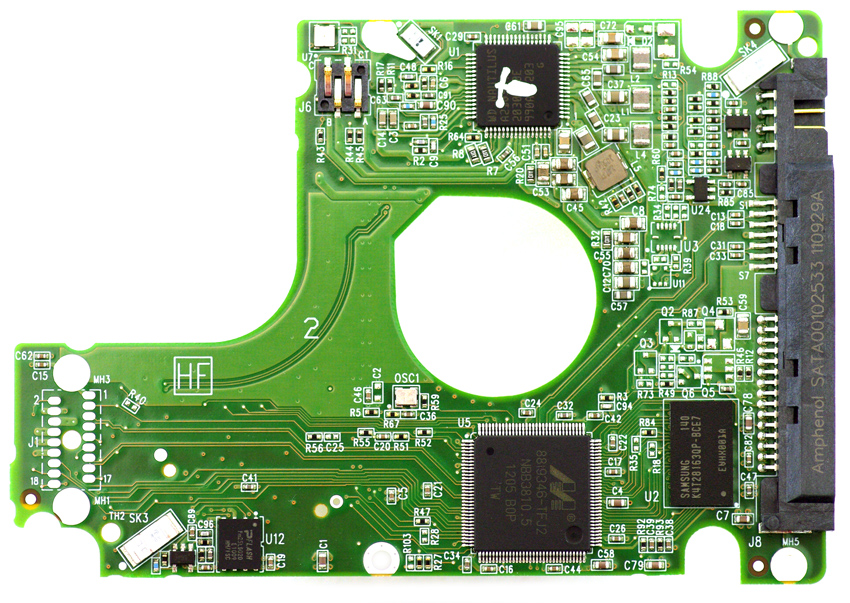 In a test of random 2MB transfers, the 500GB Scorpio Blue maintains its performance advantage, far bettering the notably poor performance of the 640GB model in the write test.

Random 4K read and write benchmarks are toughest on a hard drive since each operation requires the drive head to move to a new location. In these tests, the 500GB Scorpio Blue maintains its lead over comparable drives, though the Samsung SpinPoint M7 640GB, Seagate Momentus 5400.6 640GB, and Hitachi Z5K320 320GB also have strong showings in IOPS write performance. 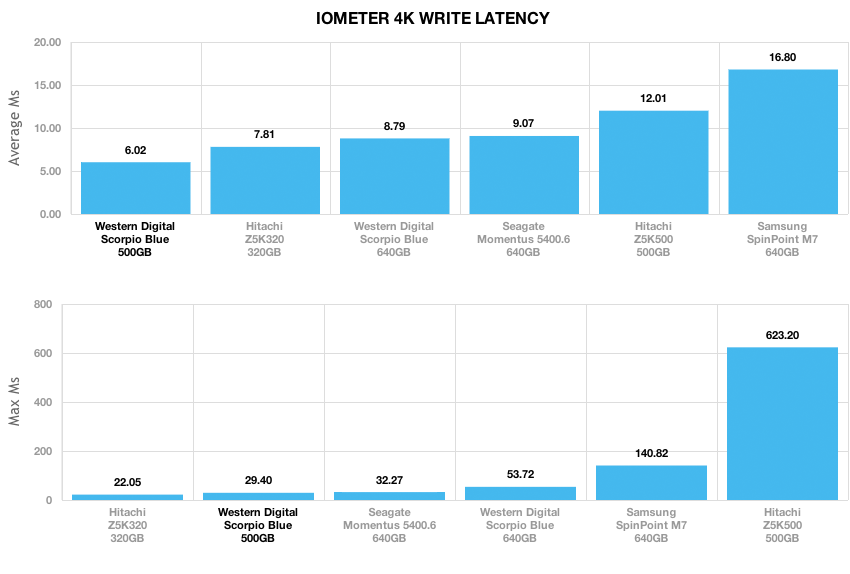 Latency scores add another dimension to the 4K random write test, reflecting variations in rotational speed and platter density between the drives. The 500GB Scorpio Blue leads with an average latency of 6.02ms but loses out to the Hitachi Z5K320 320GB on maximum latency, where the Hitachi’s 22.05ms betters WD’s 29.40. 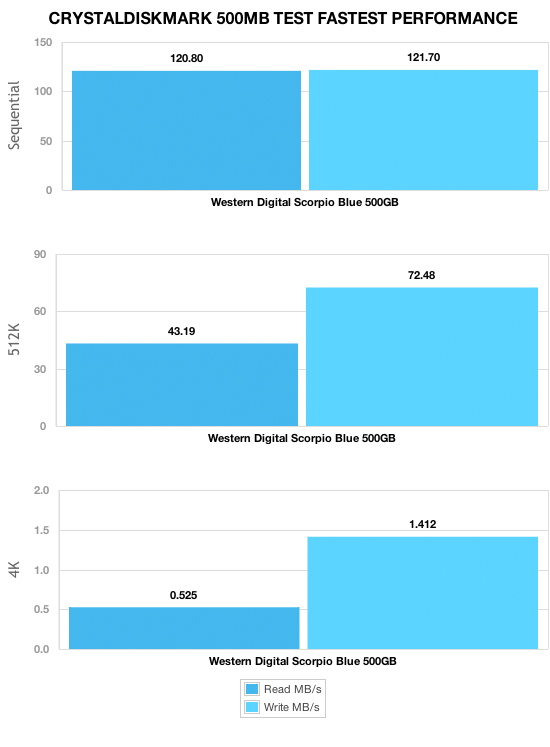 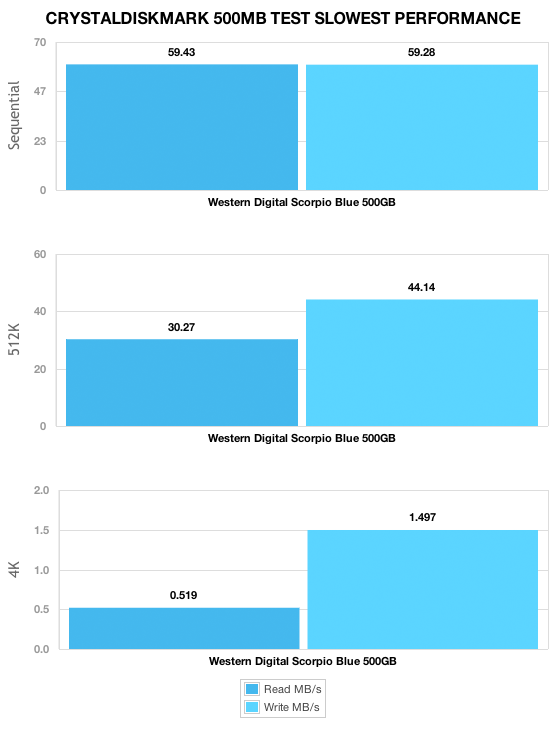 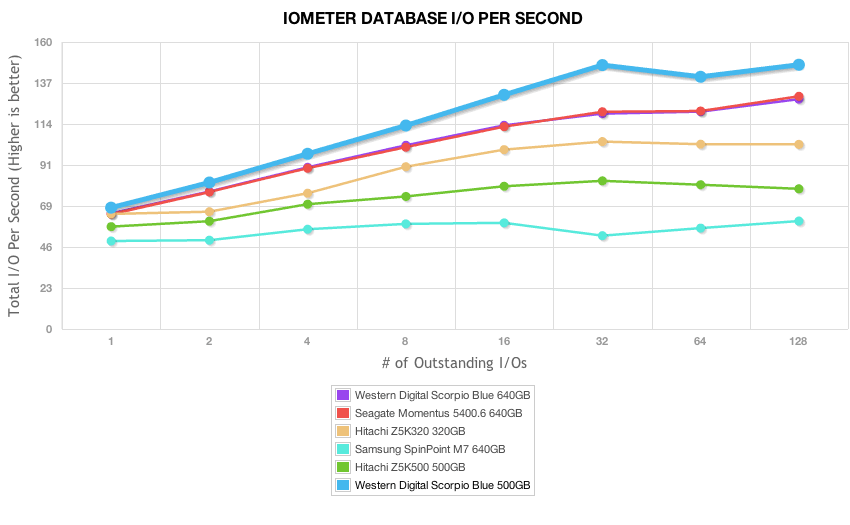 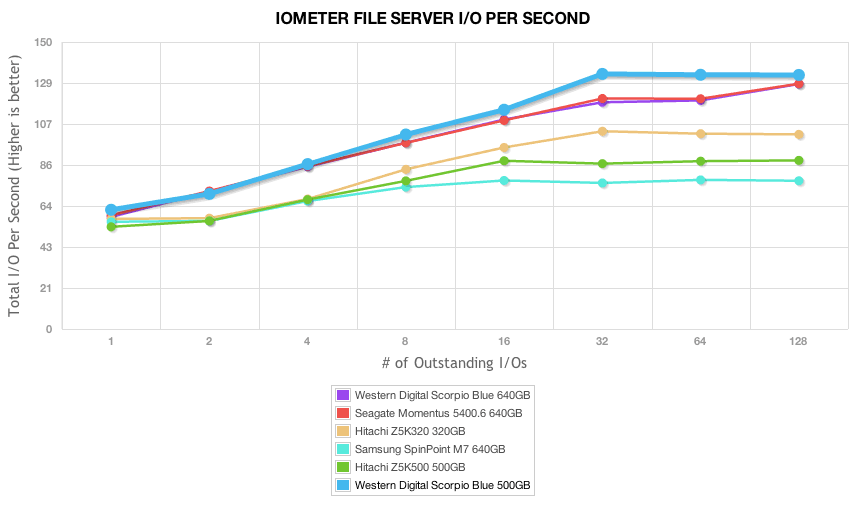 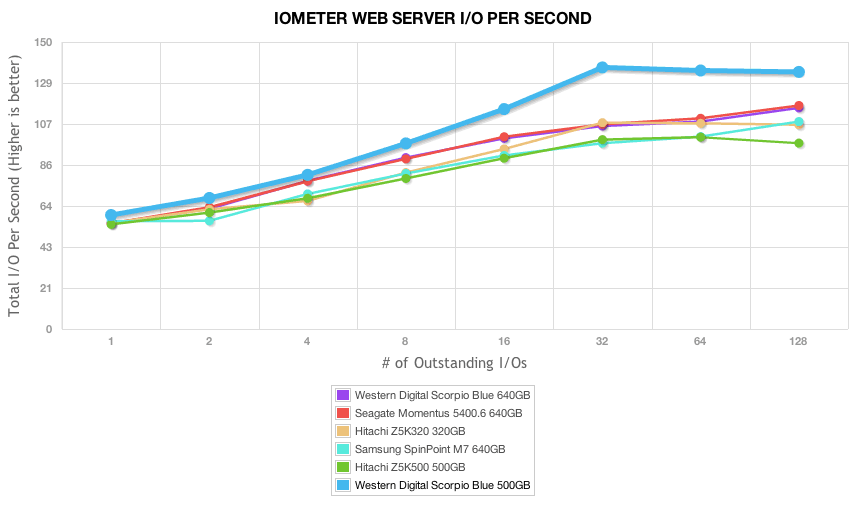 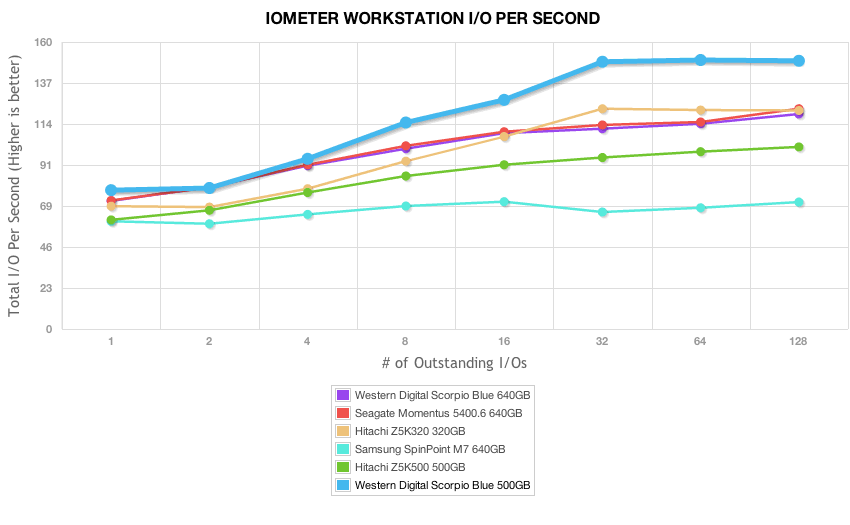 To get a better idea of how these figures translate into real-world performance, we ran StorageMark 2010 on its Gaming Disk Capture trace, which tracks the read and write performance during an intensive video game. The gaming trace is 6% write and 94% read and consists of a Windows 7 Ultimate 64-bit system configured with Steam, Grand Theft Auto 4, Left 4 Dead 2, and Mass Effect 2. 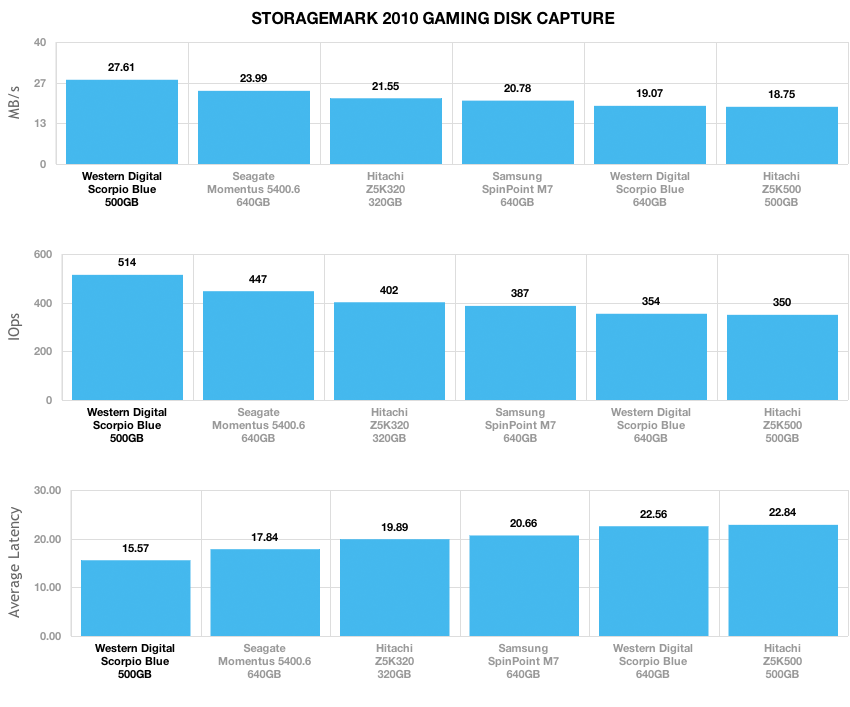 The 500GB is the clear winner in the game trace, with an honorable mention to the Seagate Momentus 5400.6 640GB for its competitive latency.

Even though hard drives are in a very mature stage of development, WD is still finding innovative ways to boost hard drive performance, while further enhancing functionality and reliability. The refreshed 7mm Scorpio Blue shows that innovation can still occur, as WD delivers class-leading performance with their single-platter 500GB design. For those contemplating the trade offs that many ultrathin notebooks and tablets present buyers with, having a high-capacity 7mm hard drive offering that performs well is nice to have. Coupled with a small caching SSD in front, users can get the blend of performance and capacity that many desire.

For users of ultrathin notebooks there are often compromises due to design constraints, but thanks to WD high-capacity storage isn’t one of them. The new 7mm Western Digital Scorpio Blue gives users a class-leading 500GB hard drive that does well on its own or can excel when used with a small caching SSD in front.