The SanDisk Ultra SSD was announced just earlier this year. Our 240GB unit has a $420 street price and features a SandForce SF-1222 processor. It also uses the company’s own NAND flash memory. Check out our review where we compare it to other SSDs in its market segment and see how it compares.

The SanDisk Ultra SSD was announced just earlier this year. Our 240GB unit has a $420 street price and features a SandForce SF-1222 processor. It also uses the company’s own NAND flash memory. Check out our review where we compare it to other SSDs in its market segment and see how it compares.

The Ultra SSD is the first SanDisk SSD we’ve reviewed here at StorageReview. The Ultra 240GB SSD is somewhat unremarkable; the specifications aren’t much different than those from other vendors that use SandForce controllers such as OCZ or OWC. Any performance differences will likely lie in the fact this drive uses SanDisk’s own NAND flash memory and the optimization of the processor/controller. 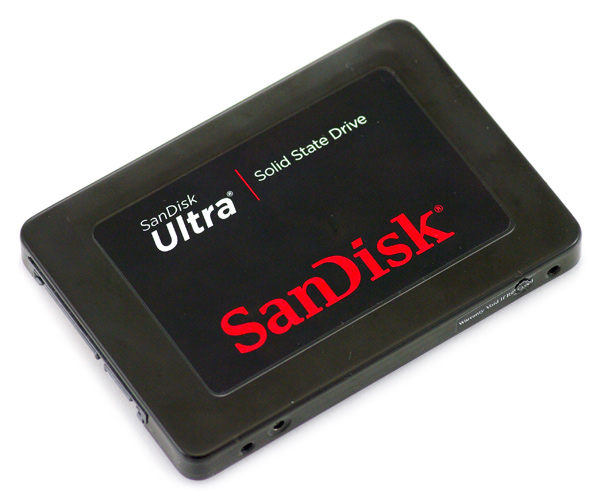 The SanDisk Ultra SSD has a stamped metal case like the Western Digital SiliconEdge Blue and Viking Modular Enterprise SSD; although instead of being bare silver it is painted matte black. The case is very sturdy, in fact one of the strongest designs we have seen, and conforms to the 2.5-inch hard drive spec to fit in all tight-fitting 2.5-inch enclosures.

Both sides have horizontal mounting points for securing the drive in a hard drive bay, as well as screws that hold the two case halves together. 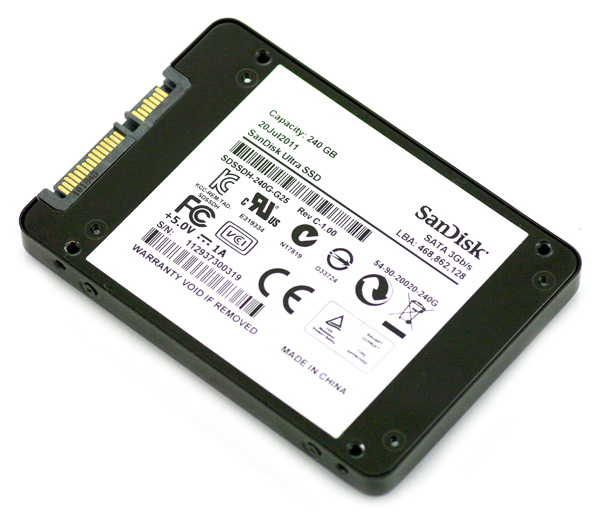 The bottom of the drive is pretty basic outside of the additional tray mounting holes and some screw threads visible that are used to hold the internal circuit board to the bottom half of the case.

The front of the drive features a standard SATA power and data connection, with no visible service pins.

The SanDisk Ultra SSD is easy to take apart, although doing so will void the warranty. The two metal case halves are held together with some friction and four small Phillips head screws along the sides of the case. With the screws removed (one screw covered by a warranty voiding sticker), you can carefully pry the two case halves apart.

Inside the SSD we immediately see sixteen SanDisk-sourced 05070 016G 16GB NAND pieces flowing through a SandForce SF-1222 controller. As a NAND producer, it was good to see SanDisk using their own flash inside the Ultra SSD. 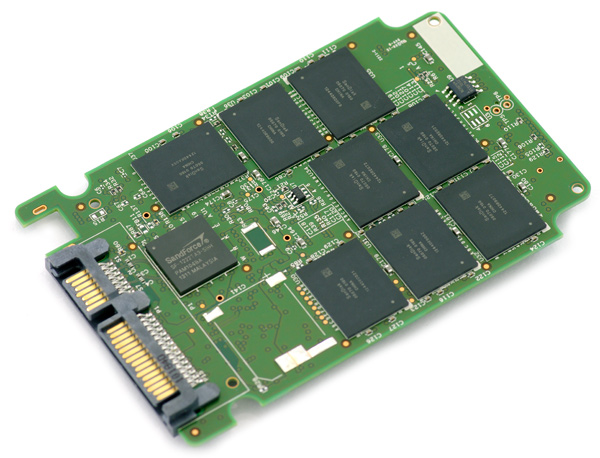 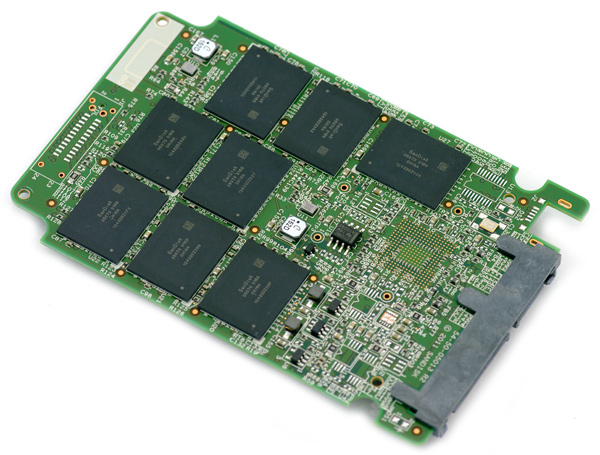 Our reviews start with synthetic benchmarks, which provide a glimpse of what can be expected from the drive on its best day. These benchmarks will show off the maximum performance capabilities of each drive and highlight strengths and weaknesses. 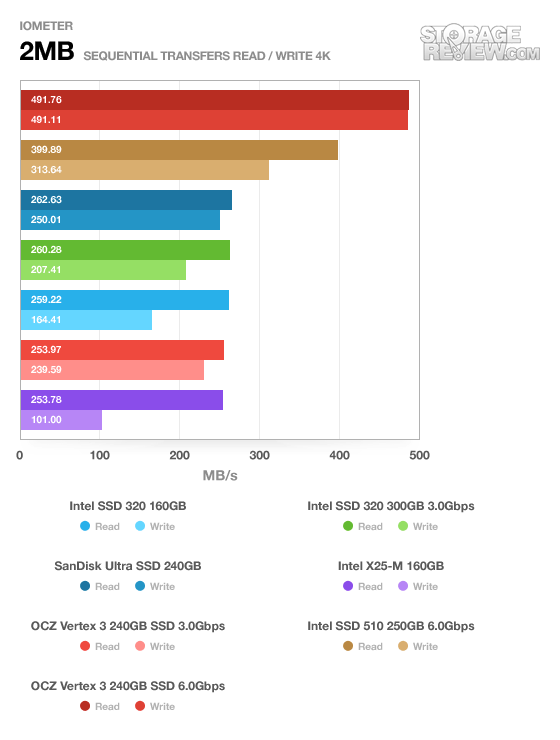 SanDisk says the Ultra SSD can read up to 280MB/s sequentially and write 270MB/s sequentially; our numbers measured in at 263MB/s and 250MB/s, respectively, or about 7% less. While the read number isn’t impressive the write number is above most competitors. 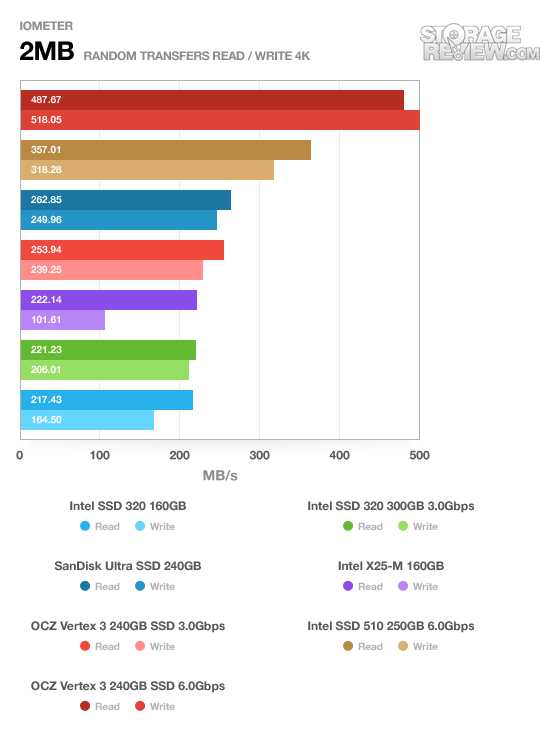 The SanDisk SSD produces nearly the same numbers in this random transfer benchmark, which is impressive; notice how some competing drives like the Intel models lost performance. One way or another the SanDisk isn’t even close to the OCZ Vertex 3 (which is more expensive, however). 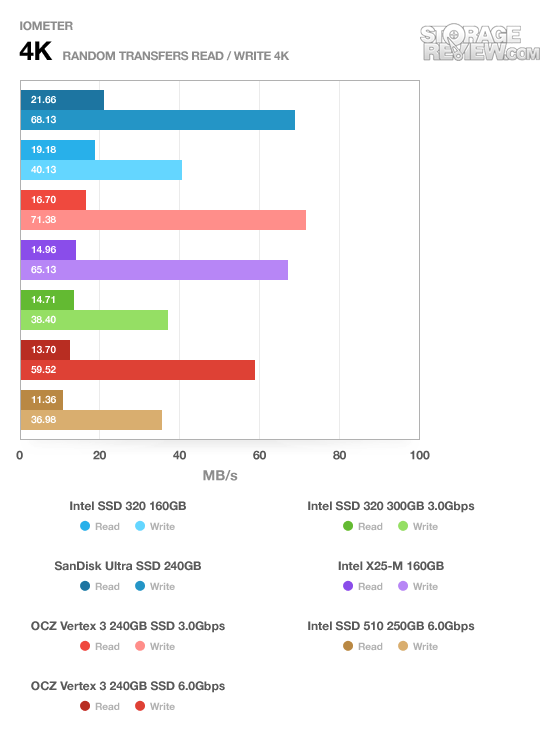 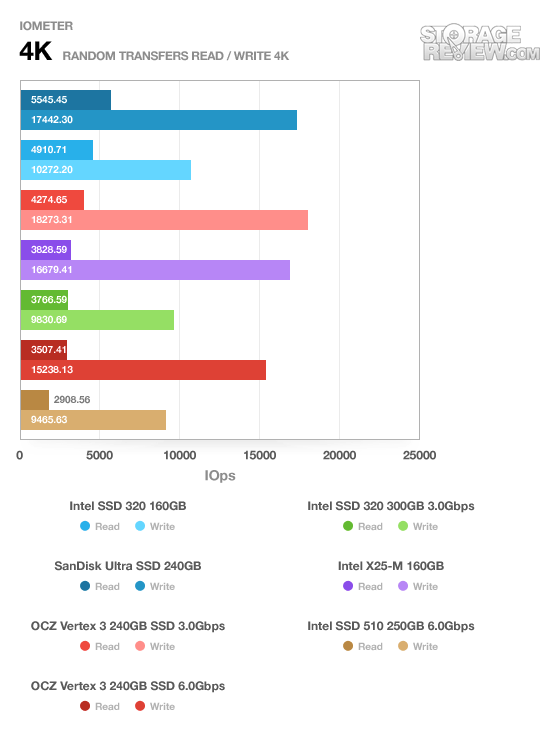 And just when I said the SanDisk SSD could not touch the OCZ, the tables turn; it crushes the competition here and the Vertex 3 just barely pulls ahead in write performance. 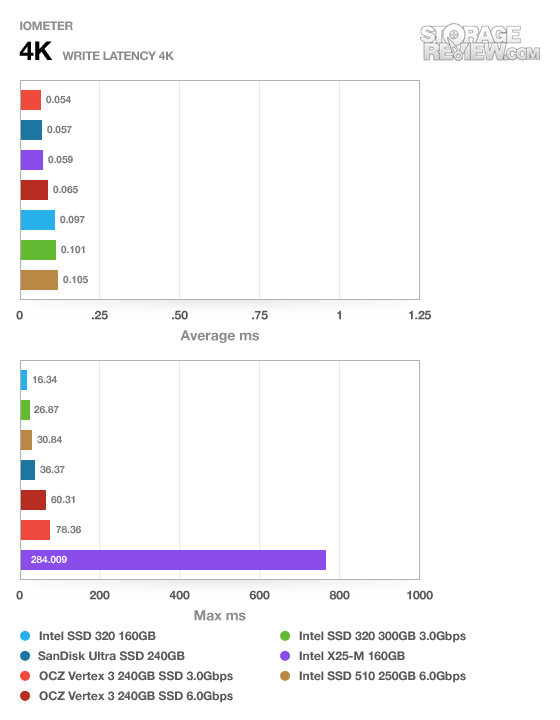 The SanDisk SSD puts up another great showing here – could this be a sign of things to come? 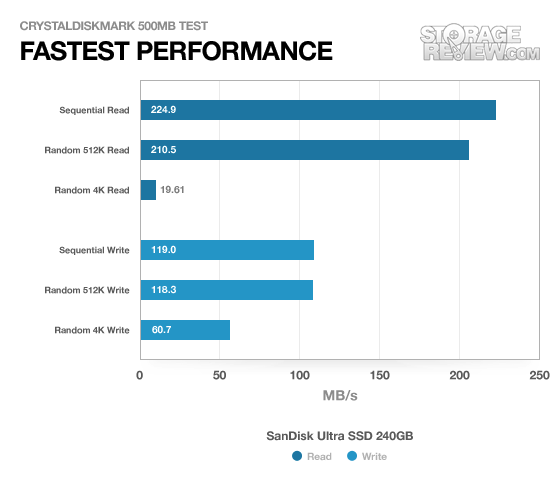 These numbers are a good deal lower than the IOMeter 2MB sequential benchmarks we ran at the beginning.

This next set of IOMeter benchmarks simulate a server-style load on the drives. This analysis is relevant for enterprise customers looking to integrate these drives into server applications. Typically only enterprise-class SSDs are used for such applications. What we’re looking for here is a performance increase from left to right. 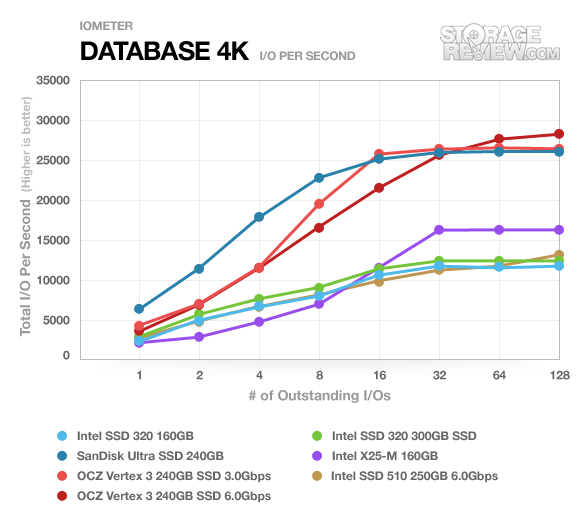 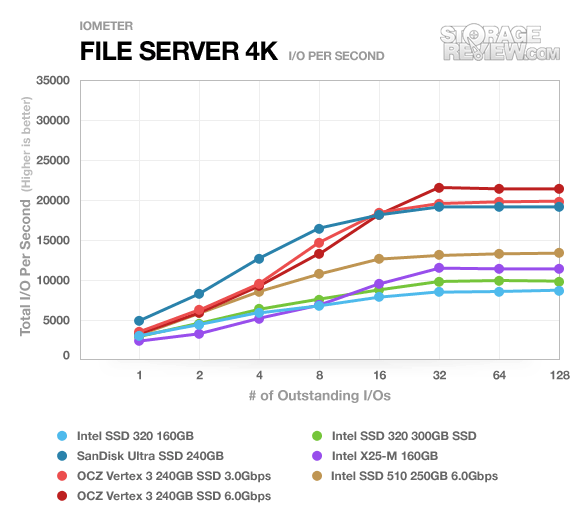 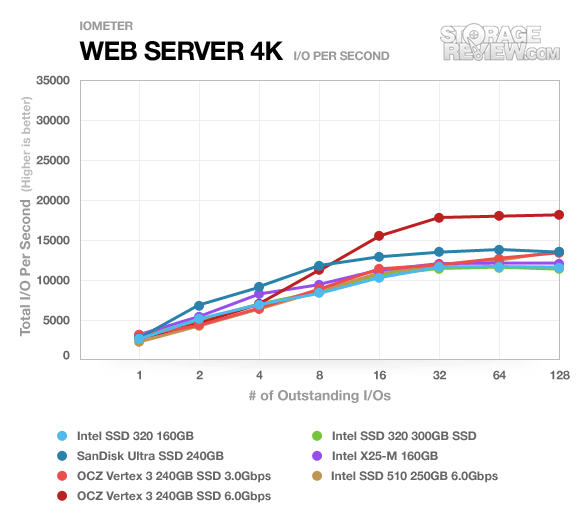 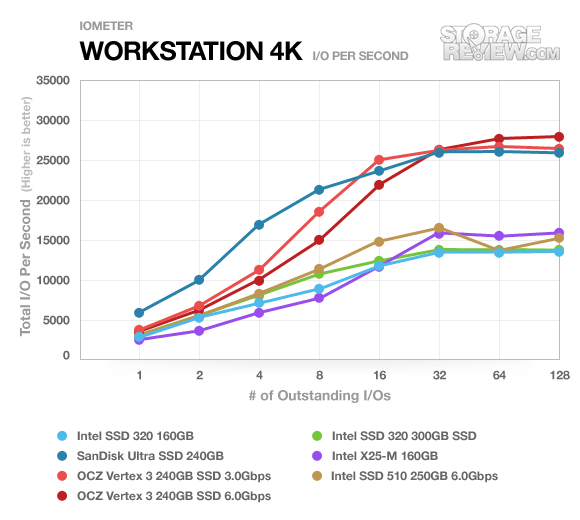 The SanDisk SSD outperforms nearly all of the competition, even the more expensive OCZ Vertex 3. However, the OCZ takes over once the queue depth increases to 32+. 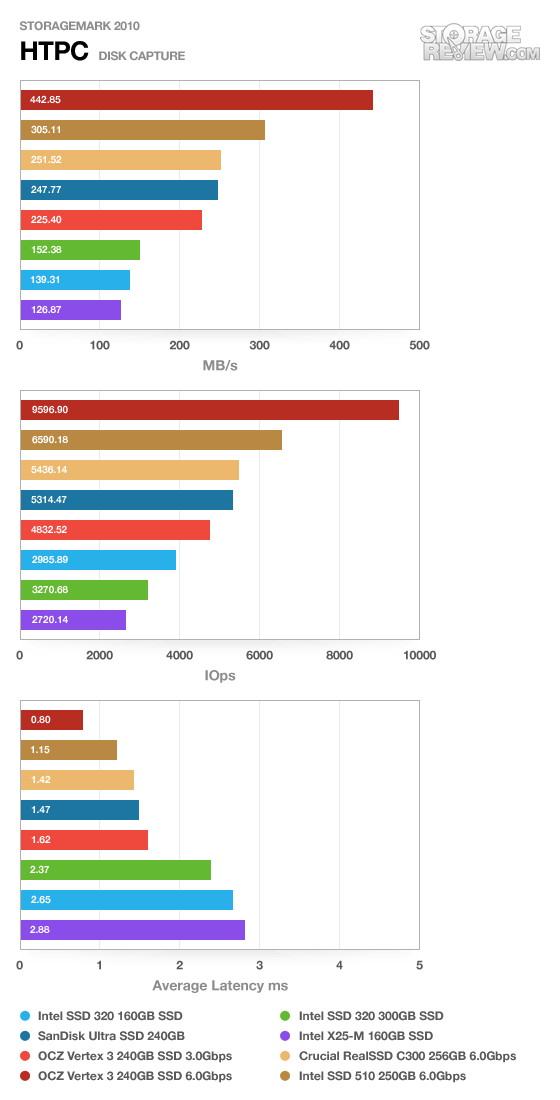 The SanDisk SSD manages to stay just above middle of the pack. The Intel SSD 510 makes a surprise showing and outperforms it (the SanDisk beat it in a good number of the synthetic benchmarks). The SanDisk SSD has a low latency – it’s good to see some of our synthetic findings translated in to real-world results. A low latency most certainly helps read and write performance alike. 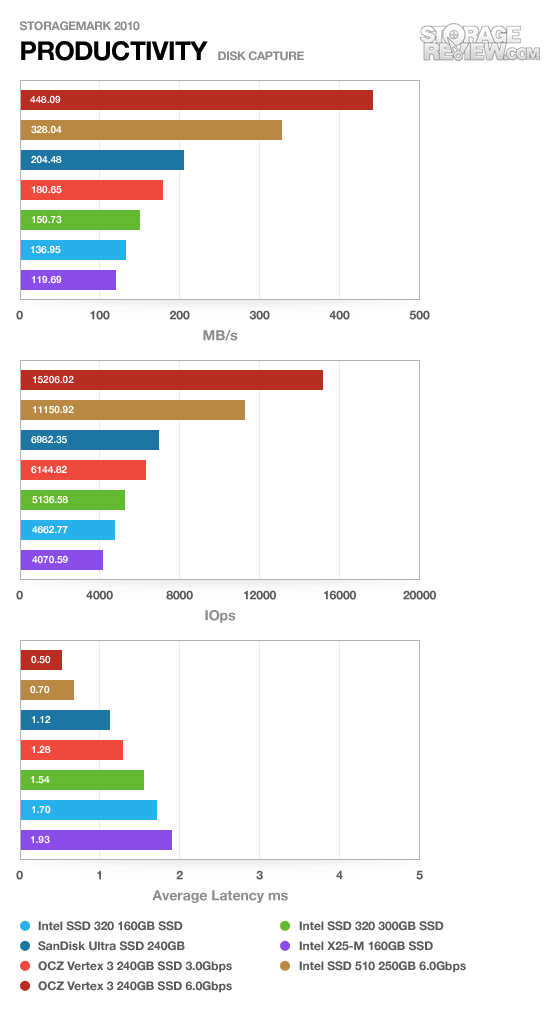 The drive falls a bit further behind in this test versus the last, only outperforming the mainstream Intel SSDs. Again it maintains a low latency which is good and makes for a responsive drive even under load. The SanDisk SSD is outclassed by the enthusiast-level Intel 510 and OCZ Vertex 3 though – there’s no hiding the fact. 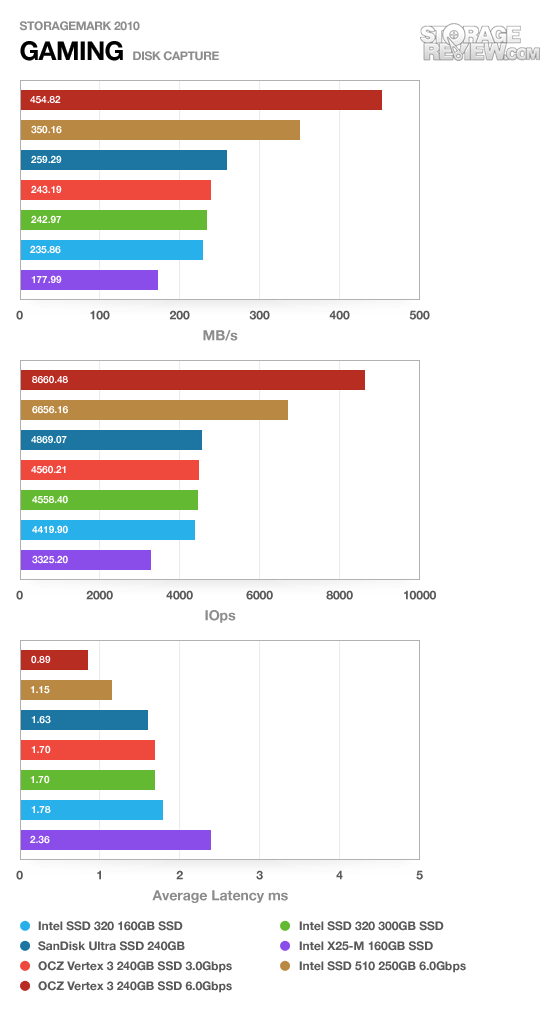 It is possible the SanDisk SSD’s SATA 3.0Gb/s interface is holding it back, evidenced by the differences between the OCZ Vertex 3 6.0Gb/s and 3.0Gb/s models. The SanDisk SSD doesn’t make a notable showing here. 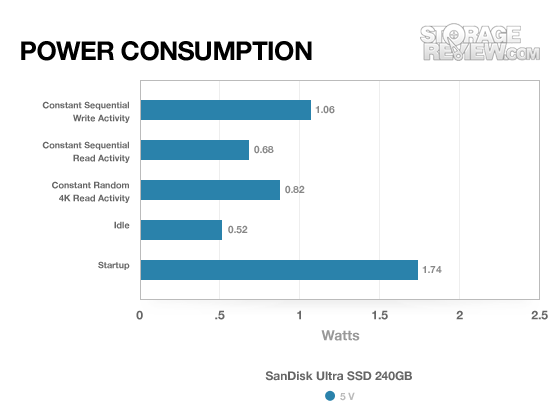 The SanDisk SSD uses a relatively small amount of power, even for an SSD. The read and write numbers are especially low.

The SanDisk Ultra SSD is backed by an industry-standard three-year limited warranty. SanDisk also rates the 240GB Ultra SSD for a whopping 128TB of total data written to it over its lifespan. The 60GB and 120GB versions are rated for 40TB and 80TB, respectively.

The SanDisk Ultra SSD 240GB is a good buy. It provides an attractive mix of performance, capacity, and price which are all things people shopping for an SSD are looking for. Slightly over $400 street for a 240GB drive is reasonable, although the price is on the higher side given the last-generation SandForce processor. In some of our benchmarks it actually outperformed the class-leading OCZ Vertex 3, but ultimately stayed below SATA 6Gb/s-enabled models.

On the topic of performance, it’s unfortunate the SanDisk opted to use the older SATA 3.0Gb/s interface instead of the new SATA 6.0Gb/s standard. Our real-world benchmarks especially showed it is likely a limiting factor in certain scenarios where maximum disk performance is required. That said, the drive still has more than reasonable performance and isn’t slow by any means.

At the end of the day we can give the SanDisk Ultra SSD 240GB our recommendation for an ideal mix of performance, capacity, and price. We’re also enthusiastic to see SanDisk in the client SSD space and can’t wait to see what comes next.