Western Digital has added to their line of media streaming products with their latest effort, the WD TV Live (WDBHG70000NBK). TV Live is designed to get both your networked media files and streaming services into new places in the home. Where the WD TV Live Hub is the bigger brother with 1TB of internal storage and geared to be in the home theater, the WD TV Live has no local storage and is designed to go with the bedroom, office or other TV in the house. TV Live is not only much smaller than the Live Hub, but it also features WiFi, making setup about as easy as it gets.

Western Digital has added to their line of media streaming products with their latest effort, the WD TV Live (WDBHG70000NBK). TV Live is designed to get both your networked media files and streaming services into new places in the home. Where the WD TV Live Hub is the bigger brother with 1TB of internal storage and geared to be in the home theater, the WD TV Live has no local storage and is designed to go with the bedroom, office or other TV in the house. TV Live is not only much smaller than the Live Hub, but it also features WiFi, making setup about as easy as it gets.

The footprint, price point and features of the WD TV Live are going to draw instant comparisons to Roku and Apple TV, who are industry leaders in media streaming boxes without local storage. Each device has a core set of benefits; for the Roku 2 it’s a robust set of channels, that may or may not have value, depending on your likes. Apple TV is tightly integrated with iTunes and other Apple services. For WD, it’s the ability to stream content from networked sources, something that Roku has inexplicably rejected in their latest hardware revision and Apple locks down to a certain degree.

When it comes to content, WD goes with the less-is-more approach, making sure the content they provide is of high quality. It’s hard to ignore the elephant in the room though; WD does not have a deal with Amazon in place. When WD started down the media streamer line, they opted to go with Blockbuster for movies, for one reason or another. While WD won’t say for sure, it’s our guess that this deal precludes them from working with Amazon on streaming content for some period of time.

WD is making strides though, part of today’s announcement of the WD TV Live, includes the addition of new content from Spotify, a first for media boxes of this nature and Dailymotion. Add that to many other quality channels including Pandora, Hulu Plus, Netflix, CinemaNow, Blockbuster and WD has a pretty complete offering of the top-tier streaming media services.

In addition to the streaming services WD also has the ability to play both local content and networked content. While it seems obvious that a media streamer would do such a thing, they don’t all accomplish this task, like the Roku 2 for instance. The TV Live consumes photos, video, and music files from just about any networked device or locally via the two USB ports on the device. 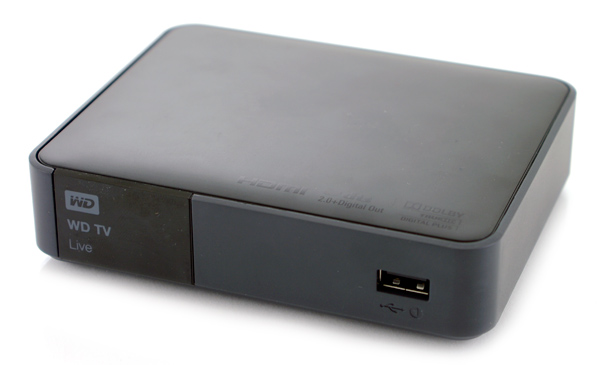 The WD TV Live is a small and unobtrusive black plastic box that can easily blend in with other connected devices and is small enough to hide away a bit if needed. In the box WD includes a remote, power cable and sigh, RCA cables. Lowest common denominator for sure, but not entirely useful for a majority of people buying this product – you’ll have to supply your own HDMI cord. 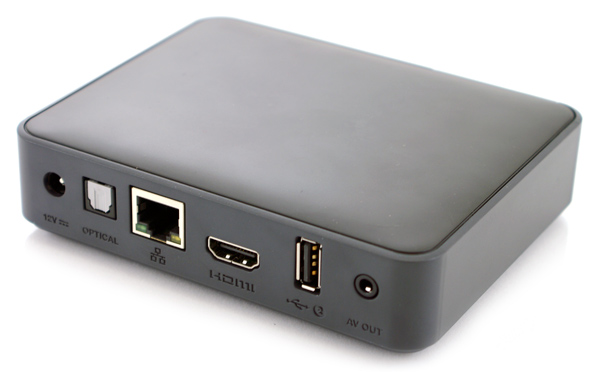 The front of the unit houses the WD badging, IR receiver, power light and USB port for file access. The light is small, but can be turned off in preferences, a nice touch. 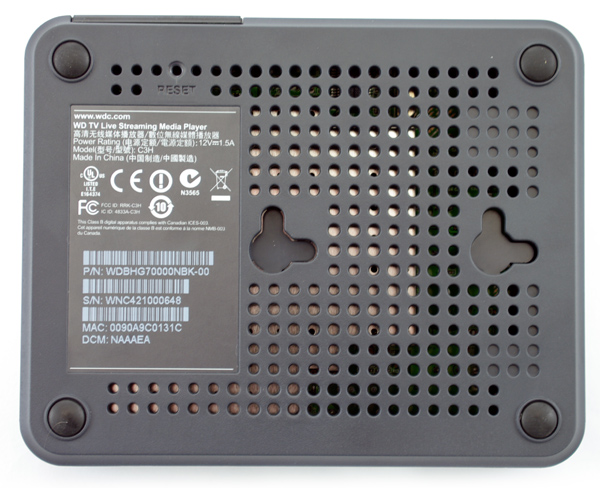 The back houses the AV out via RCA, a second USB port for more permanent use of an external hard drive for instance, the HDMI port, Ethernet port, optical output and power plug. 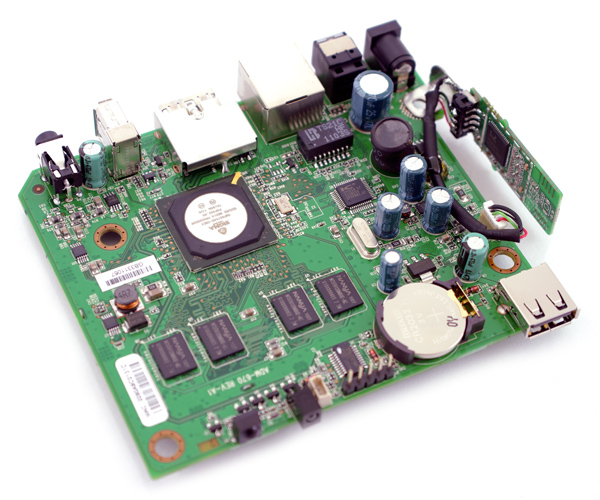 Inside the WD TV Live is a Sigma Designs SMP8670AD-CBE3 processor with 512MB of DDR2 memory from four Nanya NT5TU128M8GE-AC chips spread around the motherboard. This compares with 256MB found on the previous WD TV Live Hub, as well as a slightly older processor. Flash storage was partially hidden from view, but we guess that it is probably the same 2GB NAND chip or greater, given the same operating system and featureset. 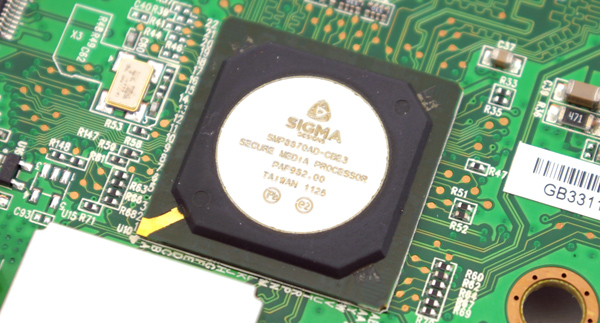 Compared to previous WD media streamers, a major new feature is the inclusion of WiFi. While many home theater users have Ethernet available, or have configured a wireless access point for all their media gear, with WD’s intention for the TV Live to be used on secondary TVs around the house, including WiFi was a must for easy plug-and-play use. Users are prompted to use either wired or wireless network, and setup is as easy as clicking on your home network name and entering in a passkey if required. 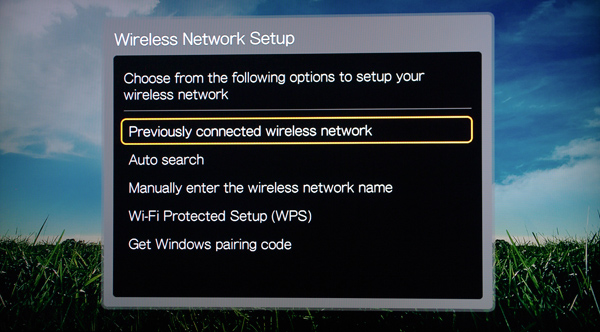 Once powered on the TV Live asks for basics like language preference and wireless access key; it took us a minute or two to be fully functional. Users are presented with a clean and intuitive interface that scrolls the functions across the bottom of the screen. Without internal storage one of the main draws to this type of device is the ability to stream media off of a network source. This process is nearly painless, with the WD TV quickly finding available Samba or NFS shares, and prompting for a username and password. 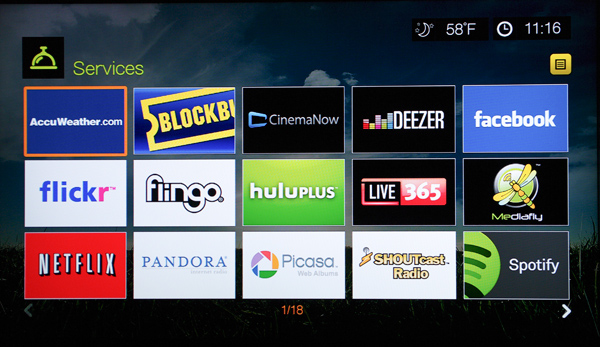 For all intents and purposes the WD TV Live looks, feels, and acts just like the WD TV Live Hub before it, just without an internal hard drive and a slightly expanded software package. 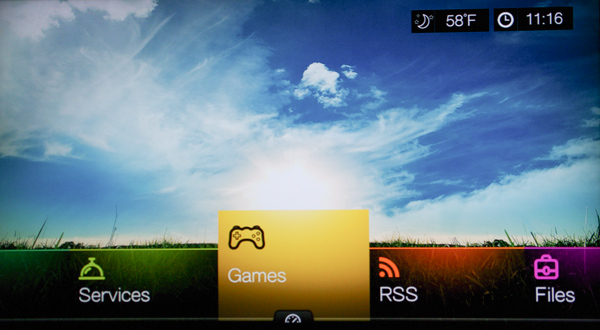 To control the WD TV Live, Western Digital included a full-size remote. For navigating the interface, the remote is very responsive and gives solid feedback on button presses. Compared to the small remote on the original WD TV the newer style could be considered clunky, but it all comes down to preference of the person using the system.

The WD TV Live had no trouble playing any of the content we tested. This includes high-bitrate 1080P videos, downloaded movie trailers, and everything we could download to think of testing. Compared to the Live Hub, the newer Live with double the RAM seems to handle streaming 1080P video better, although if there is a difference it is very minute. With the gigabit network connection it made no difference if movies were played locally off a USB hard drive or over the network in terms of responsiveness.

The full list of supported video formats and codecs is listed below:

File Formats Not Supported – Does not support protected premium content such as movies or music from the iTunes Store, Cinema Now, Movielink, Amazon Unbox, and Vongo

Power consumption is a hot topic for many electronic components, especially ones that stay on 24/7. The WD TV Live remains in a full-power state at all times, even when in a “standby” mode which cuts off the HDMI signal. Thankfully at idle the system only draws 7 watts. If you are looking to cut down on power usage one tip might be connecting the WD TV Live to a switched power outlet on the back of a stereo receiver which would only power the unit on when in use.

To test peak power usage we played a 1080P video off a local network source. Once the video started to play our Kill-A-Watt only registered a 1 watt increase in power usage, totaling 8 watts.

The Western Digital WD TV Live diverges from the WD TV Live Hub by removing internal storage and adding integrated WiFi and a little more RAM. The overall box size is smaller too, coming in at about a stuffed ham and cheese sandwich in overall mass. That makes TV Live easy to drop next to just about any TV, from the home theater to the den, bedroom or kitchen.

In terms of competition, WD TV Live is priced to go up against other disk-less streamers like the Apple TV and Ruku boxes which are all in the sub $100 market. WD’s main trick though is its ability to play close to any file format from a local or network source, whereas others are limited to subscription streaming services only.

In terms of content, WD continues to roll out new services. With this product’s announcement they’ve added Spotify, which is gaining a big following as a competitor to Pandora and is disrupting the way people buy and share music. The other services offered are well-made and are the cream of the crop, with the noticeable exception of Amazon, which is missing from the box. WD tells us that there’s plenty more coming on the content front though, which continues to add value to the TV Live without adding any cost.

The Western Digital WD TV Live offers tremendous bang for the buck. For entertainment types who want ultimate flexibility or have a network drive with a bunch of media content they want to blast around the house, the TV Live is the must have device.