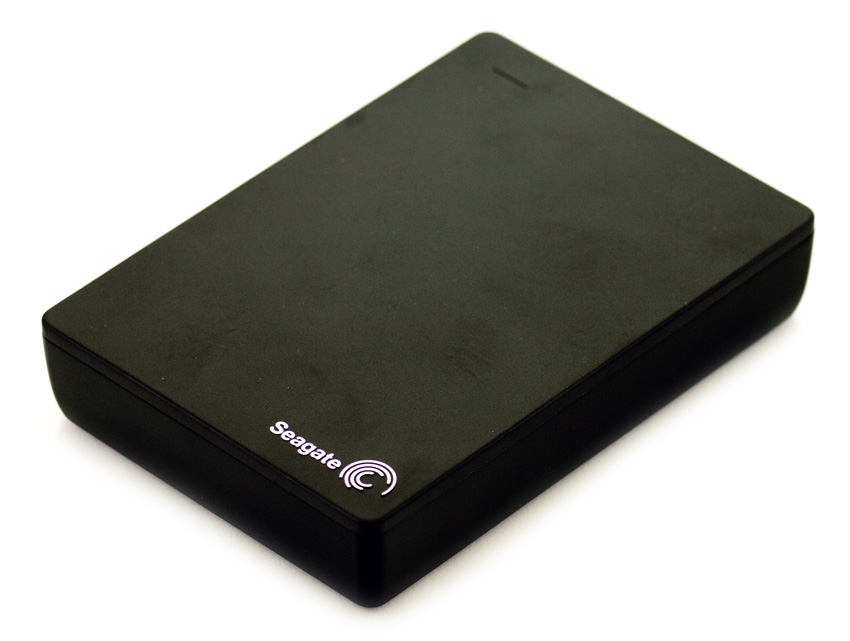 Seagate’s website claims that their Backup Plus mobile drive boasts up to twice the speed of other portable hard drives fast USB 3.0 interface with its transfer speeds up to 220MB/s. Those are extremely good numbers, especially compared to other portable consumer drives such as the LaCie Rugged and G-Technology G-DRIVE that are limited to a single hard drive inside. So how does Seagate’s new drive reach this performance level? Well, the device actually contains two 2TB 9.5mm Samsung drives in RAID0 (striped) to account for both the speed and 4TB capacity. The Samsung drives have appeared in Samsung branded externals prior, but Backup Plus Fast is the first product to leverage the drives in this creative way.

Also available in conjunction with the drive is a free Seagate Mobile Backup app for the iOS and Android mobile devices. The app allows users to back up all of their content to the drive, when on the same network, or to the cloud when on the go. Additionally, users can use the Save and Share features to download and upload content from social network sites such as Facebook and Flickr. To make sharing the drive between multiple systems more convenient, when the pre-loaded NTFS driver is installed on the on a Mac, Backup Plus Fast can be used between Windows and Mac computers without having to reformat the drive.

The Seagate Backup Plus Fast Portable 4TB is shipping now with a street price of $269.99 and is backed by a limited 3-year warranty.

As is the case with many Seagate devices, the Backup Plus has a simple design with the company logo on the bottom corner. Its smooth metal enclosure (top and bottom covers, middle section is plastic) helps resist scratches and fingerprints and easily fits into a laptop bag or backpack. The side end of the drive houses the USB 3.0 connector port and the top cover has a small drive activity light.

Overall, the Backup Plus is well built; but is not user accessible, which is not uncommon for portable drives. If a drive fails, the user will have to RMA the entire thing since they can’t swap one drive on their own without damaging the enclosure. Opening up the drive exposed two Samsung 2TB M9T hard drives connected through a dual-SATA to USB 3.0 adapter. 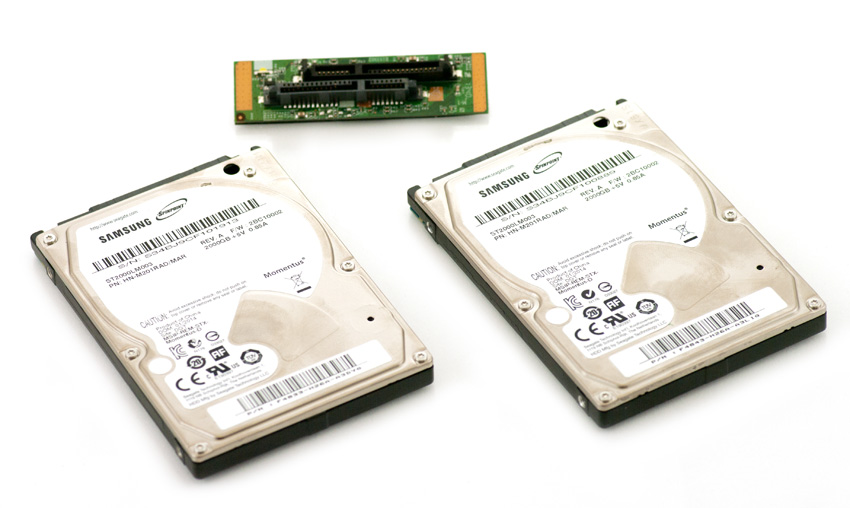 If you’re using a Mac, you will eventually be asked to select whether you’ll be using your drive on the Mac, PC or both. If you select the only Mac option, the drive will reformat itself to integrate with Mac applications such as Time Machine. 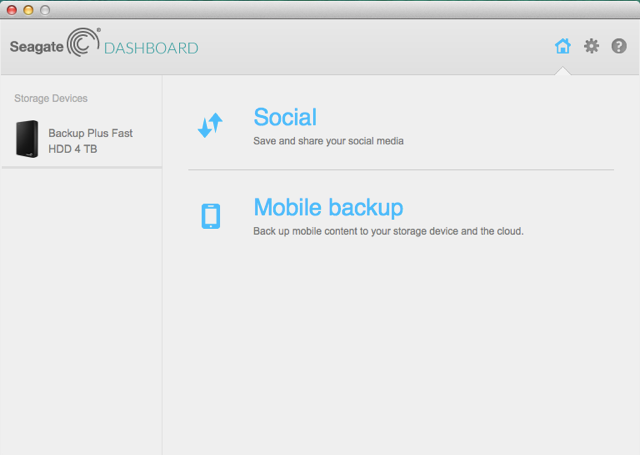 After installing the software, users will see a very simply laid out dashboard with the connected drive listed on the left; we were impressed with its simplicity and easy navigation. The “Social” section allows users to log in to their account for each site and the backup up all of their images and videos; these can be initiated automatically. The Dashboard also allows users to share their photos and videos located on your Backup Plus drive directly to their Facebook, Flickr or YouTube accounts. This functionality worked seamlessly. 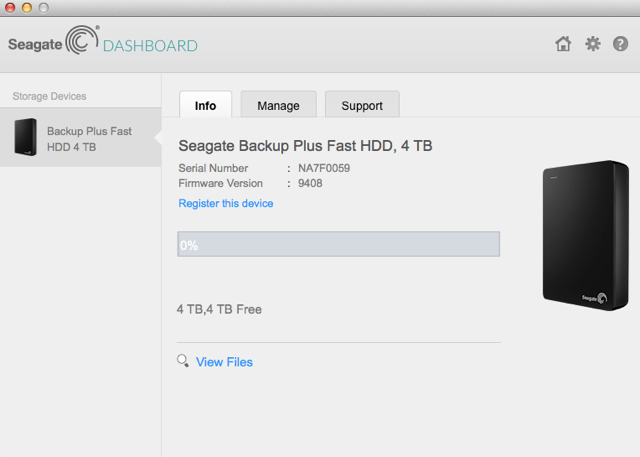 With the growing number images and videos stored on smartphones and tablets, backup is something that is becoming very important for these mobile devices. The “Mobile backup” section allows users to backup their mobile devices that have the app installed on their phone. Additionally, once you set up the backup plan in a few quick steps, backing up your phone or tablet is automatic. iOS users can find it on iTunes while Android users can find it on the Play Store.

Using our Consumer Testing Platform, we measured 2MB sequential speeds. The Seagate Backup Plus clocked in at an impressive 237.2MB/s in the write column and 183.4MB/s for read activity. By comparison, the recently reviewed LaCie Fuel (USB 3.0) measured 98.3MB/s read and 109.1MB/s write. To approach Backup Plus Fast’s performance numbers, we have to compare it to a DIY solution like the Newer Technology Guardian MAXimus Mini. The MAXimus Mini (RAID0) measured sequential speeds with an Hitachi 7K500 array of 213MB/s read and 213MB/s write. In aggregate, pretty similar performance, but the enclosure approach doesn’t include the software or cloud features, though it does allow for physical drive management and optional RAID1 configuration.

It is worth noting that the Backup Plus Fast uses RAID0 to achieve it’s high speeds and capacity, something that is not without risk. In a RAID0 environment, there is no parity of data, so if either drive fails, the entire RAID fails and data loss is certain. The drive then makes for an excellent backup target or media file repository, especially when combined with Seagate’s software for cloud backup, but it should not be relied upon as a primary data storage volume for backup or files.

The Seagate Backup Plus Fast Portable drive with USB 3.0 provides consumers with a very durable and fast 4TB mobile hard drive; it is also bus powered, meaning that users do not need to pack those pesky AC cords with them when they are on the go. Consumers working on the go will find that the Seagate Backup Plus Fast especially useful due to its plethora of space and speedy write activity. Under the hood, the Seagate drive contains two 2TB drives in RAID0 to account for the speed and high capacity, giving it a substantial boost in performance. Using a RAID0 configuration comes at a cost, however, as it allows for total data loss if one of the two internal drives fail. Users should thus be wary of that fact and we recommend that users are backing up their data to something else on a regular basis or use Seagate’s cloud option and apps to backup. This all said, this is a common issue for most mobile drives so it’s not too much of a surprise or hindrance.

One thing that we really found handy is that users can share and manage files between Windows and Mac computers without having reformat the drive; a very welcomed feature for users who cross-platform often (eg. work vs home). The included software bundle, which adds an app for mobile device backup too, is one of the more comprehensive available in the market today.

As far as performance goes, we measured 2MB sequential speeds at an impressive 237.2MB/s in the write column and 183.4MB/s for read activity, which is much higher than other premium mobile drives for only around $60 more. The extra 3TB of data, which is significantly more storage than most portable storage solutions, more than makes up for the slightly higher price for many users.