Right before the end of the year, Seagate launched an update to their eco-friendly line of hard drives. Formally known as Barracuda LP (Low Power), Seagate has changed to a more mainstream Barracuda Green branding. The Barracuda Green isn’t just about a marketing message though, the 3.5″ hard drives feature capacities up to 2TB, SATA 6Gb/s interface, 64MB cache and 5,900 RPM spin speed. This combination of specs leads Seagate to claim the Barracuda Green to be the best performing green drives on the market.

Right before the end of the year, Seagate launched an update to their eco-friendly line of hard drives. Formally known as Barracuda LP (Low Power), Seagate has changed to a more mainstream Barracuda Green branding. The Barracuda Green isn’t just about a marketing message though, the 3.5″ hard drives feature capacities up to 2TB, SATA 6Gb/s interface, 64MB cache and 5,900 RPM spin speed. This combination of specs leads Seagate to claim the Barracuda Green to be the best performing green drives on the market. 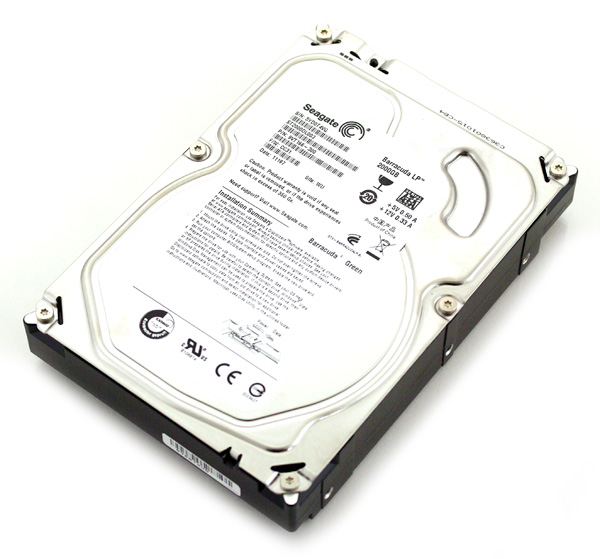 A bold claim for sure, but the old Seagate LP did top several performance charts, although it paid dearly on power consumption coming in last amongst all green drives. As we know, as much of a headline as performance tends to be, in the green space power usage is a big concern. In some cases it’s even more important than performance, especially when used in media servers and other devices that spend most their lives powered on.

The Seagate Barracuda Green looks a lot like the Seagate LP before it, and still bears the same name on the sticker. In some ways I think Seagate wanted a new marketing name, but the product guys didn’t want to budge on the older “LP” naming. If you look closely, you can see  Barracuda LP printed at the top and Barracuda Green printed lower, about halfway down on the drive. 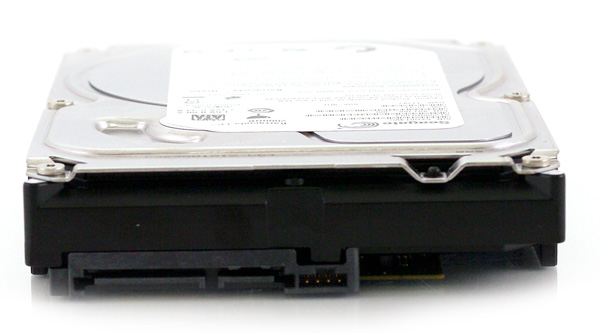 Outside of the new label, the new model looks very similar to the old. the top cover has a few extra indentations to it, as well as some new curves around the perimeter. 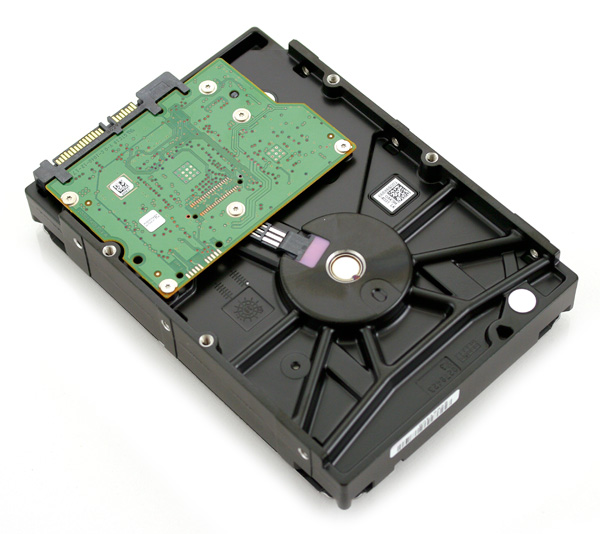 The bottom the case looks like it went on a diet; losing some of the bulk of the old drive and leveraging a smaller circuit board. The structure around the motor now has added bracing, to make up for the lost material. It really looks like Seagate completely revamped the 2TB Barracuda Green instead of just slapping a label with a new name on an old drive.

The Seagate Barracuda Green 2TB has a board design that puts all of the components in contact with the drive body itself. The board is held on with six Torx screws and is easily removed without any resistance. With the PCB removed we can see that Seagate no longer uses a thermal or vibration reduction pad between the body and the circuit board on the new Green model, which was present in the previous LP. 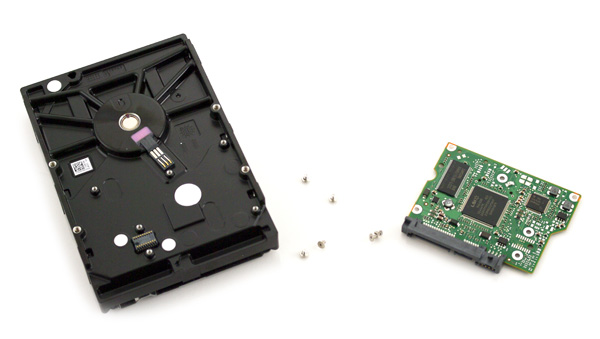 The Barracuda Green 2TB now sports a new controller, more cache, and a faster interface. The switch to SATA 6.0Gbps is coming more and more these days, even if most of the drives don’t actually saturate the old interface. The increased cache was a pleasant site, since it’s hard to go overboard in that area. The board features a 512Mb (64MB) DDR400 Samsung K4H511638G-LCCC chip, a LSI B6650B controller (also found on the new 750GB Momentus), and a Texas Instruments SH6968B motor driver. 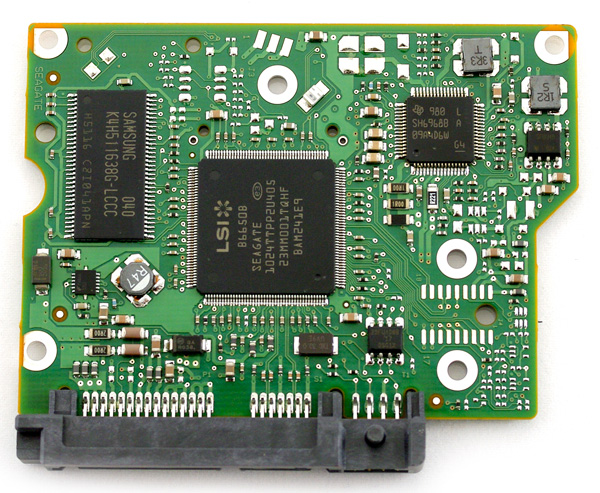 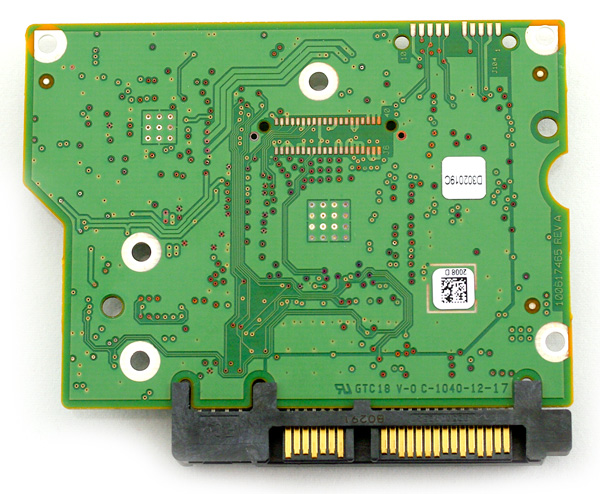 Internally the LP and Green 2TB models differ significantly. The previous generation 2TB LP makes use of four 500GB platters, while the newer Green 2TB uses only three platters. We thought this might be the case looking at the slimmer hard drive body and later had it confirmed by Seagate. While it’s easy to assume the new Barracuda Green is only a branding, interface and cache update, there are plenty of significant changes under the covers that raise our hopes and expectations for its performance.

Using IOMeter, we tested the new 2TB Barracuda Green to compare it to other drives in our test lab. The new model as you can see below, blows away all of the current 2TB models currently on the market by a long shot. With a peak read speed of 139MB/s it is over 20% faster than the older LP which topped the charts before. 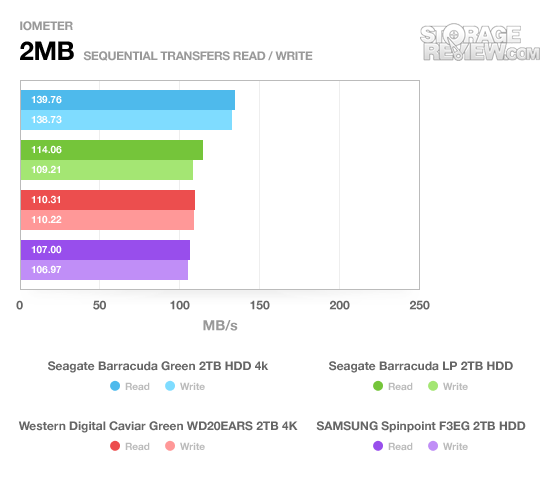 Looking at its random performance with a 2MB transfer in IOMeter, the Barracuda Green continued to dominate the chart. It measured 54MB/s read and 45MB/s write; substantial improvements over the previous generation drive. 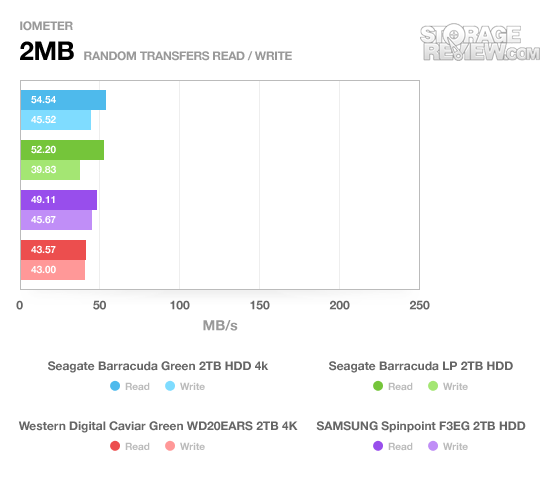 Moving to smaller random transfer sizes, the 2TB Barracuda Green lost its lead to the 2TB LP in read speed, but still edged out all the drives in write speed measuring 0.463MB/s or 118 IO/s. 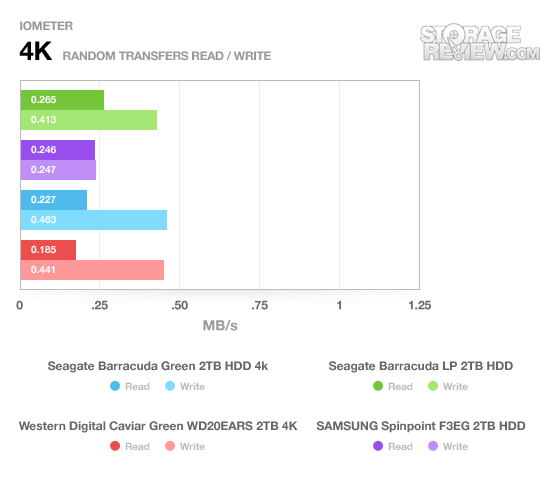 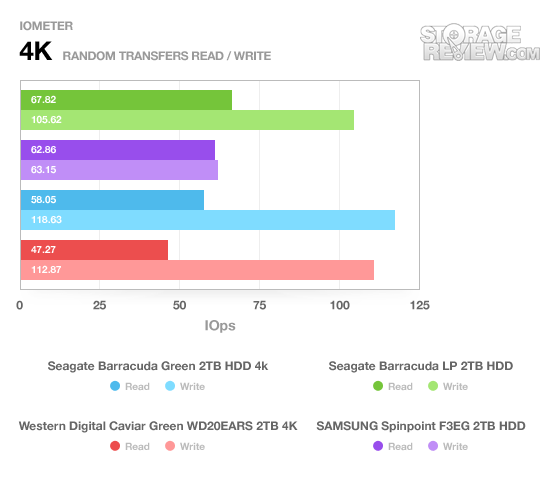 With its edge on 4K write performance, the 2TB Barracuda Green also snagged the top spot on the 4K write latency chart. It measured an average response time of 8.42ms with a 37ms max response time. 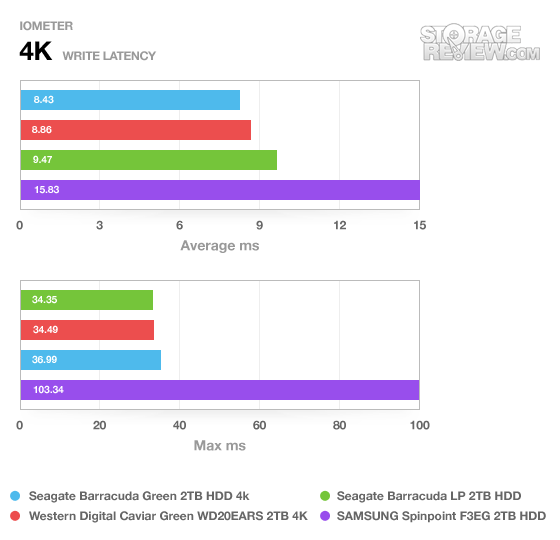 CrystalDiskMark also confirmed the 2TB Barracuda Greens dominance in large sequential and random transfers, although just like IOMeter, it also showed the performance slipping as it moved the 4K transfers. 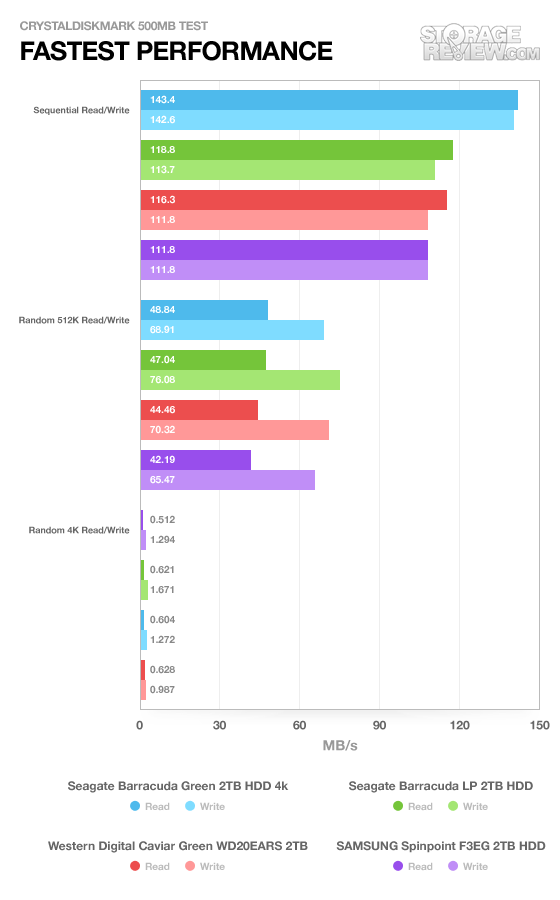 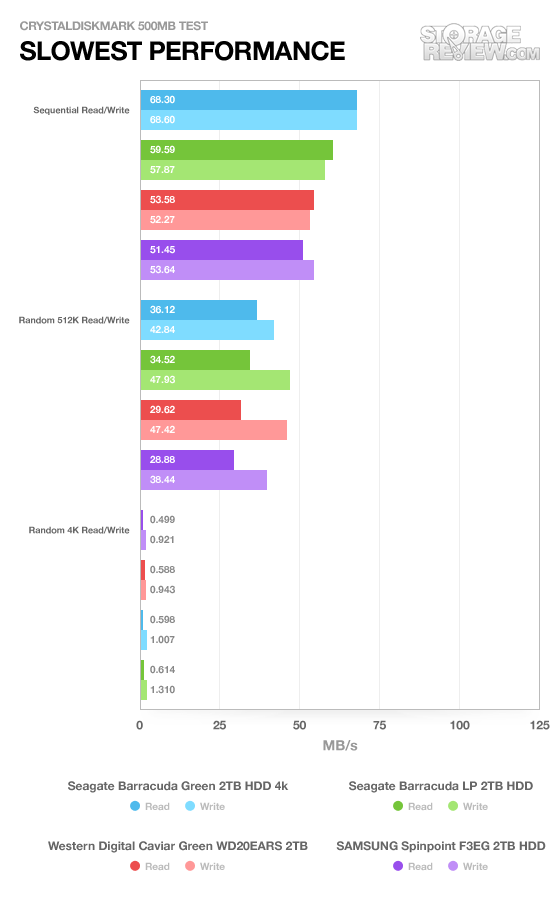 After seeing its strong performance in pure read/write activity, it was no surprise to see it leading the charts as we turned to our IOMeter server profiles. In all but the webserver test – which included all random read traffic, where the Green showed its weakest performance – the 2TB Green surpassed all the drives in the low-power category. 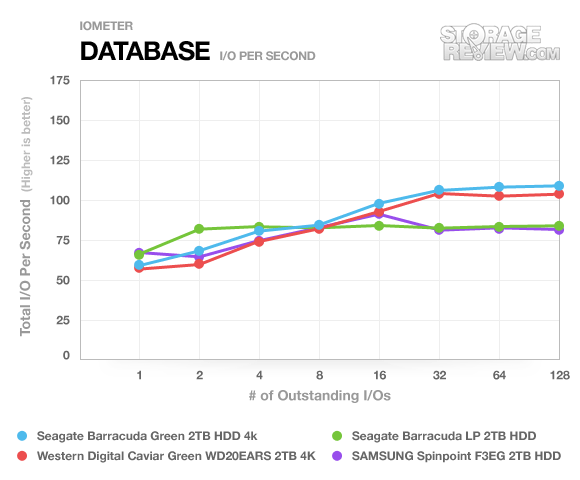 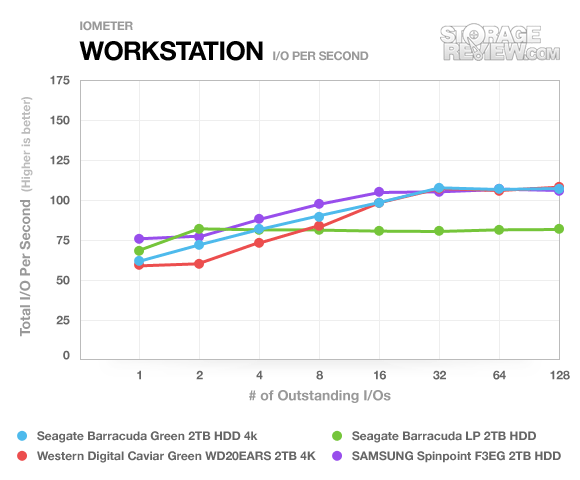 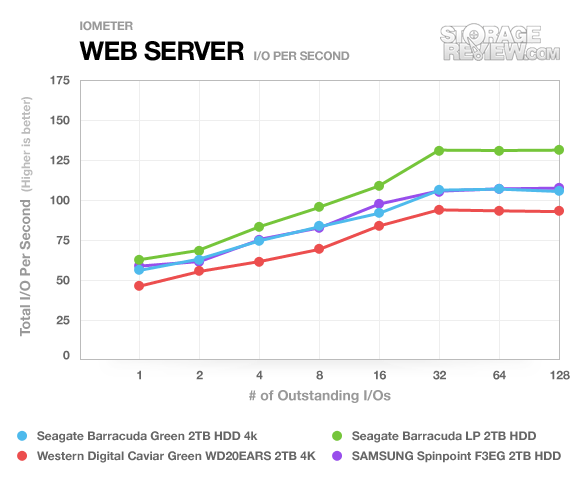 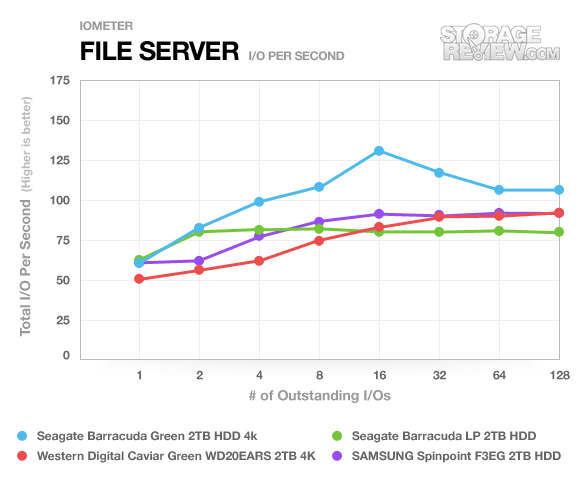 After seeing strong performance in pure synthetic benchmarks, we were curious if the Seagate Barracuda Green 2TB could maintain those speeds in real-world conditions. In the past we have seen a few drives flop when it came to everyday performance, where they looked like all out winners in other tests. 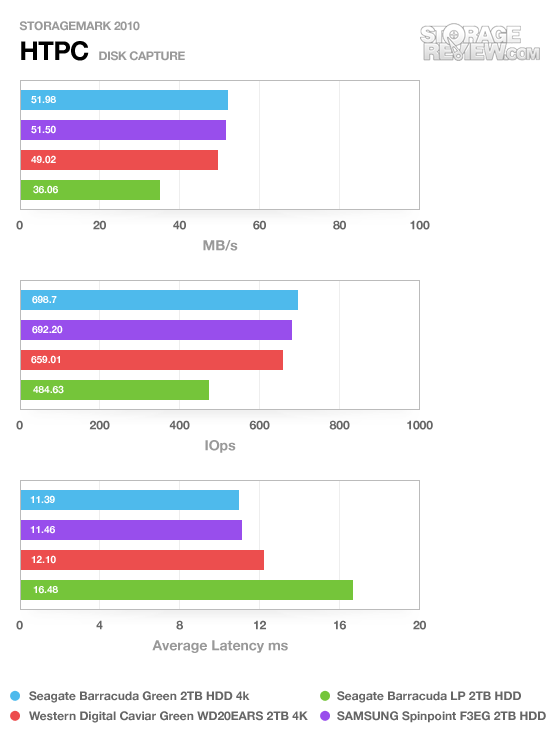 Compared to the first generation Barracuda LP, the new Barracuda Green performed very well, averaging 52MB/s in combined read and write performance in the 4K-enabled HTPC trace. This is a huge increase from the 36MB/s seen by the older revision. The Samsung Spinpoint F3 lagged behind the Green by only 0.50MB/s, whereas the Caviar Green was trailing behind it by another 1.5MB/s with an average speed of 49MB/s.

The next trace is of a gaming desktop. The test consists of a Windows 7 Ultimate 64-bit system pre-configured with Steam, with Grand Theft Auto 4, Left 4 Dead 2, and Mass Effect 2 already downloaded and installed. The trace captures the heavy read activity of each game loading from the start, as well as textures as the game progresses. In this trace we recorded 426MB being written to the drive and 7,235MB being read. 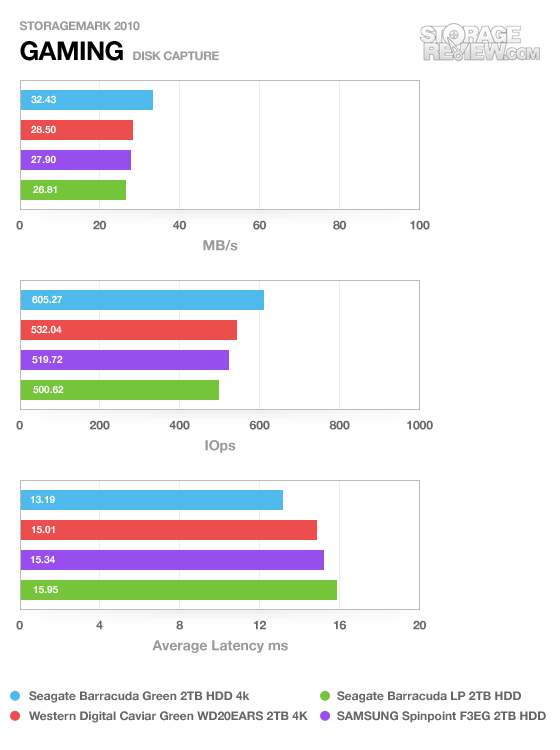 In the gaming trace the newer Seagate Barracuda Green 2TB had a significant lead of 4MB/s or 14% compared to the Caviar Green right behind it. Compared to the older LP which came in at the bottom of this trace, it had a 21% lead. While we don’t expect gamers to run out to buy a green drive, the metric is still interesting.

Power consumption is on of the main selling points of the low-power “green” hard drives. By reducing the rotation speed, manufacturers are able to produce drives that are plenty fast for hosting media, but don’t need the faster access times of 7200RPM models. In our past review of the Barracuda LP, we made note of the abnormally high peak startup power. As you can see below, that seems to still be an issue on this drive.

High startup requirements can be caused by a number of factors. On large four-platter drives you are working against the mass of all the platters as you get them up to operating speed from a standstill. In theory, reducing the number of platters can lower startup requirements between drives, but as with the Barracuda Green you can see that wasn’t the case. Manufacturers can also lower the startup requirements by doing soft-starts, where the drive accelerates at a lower rate, and thus doesn’t need as much power. It seems Seagate opted for a faster response time from an “off-state” for the new Green, making this drive draw even more power than the model it replaces.

The good news is that in idle the drive still does very well, making it a solid option for always-on or frequently-on applications. The other power metrics are in-line with the rest of the green drives.

The Seagate Barracuda Green 2TB hard drive is an excellent upgrade to the older 2TB LP. By shifting to a three platter design instead of four 500GB platters on the old model, they took advantage of the increased speed that comes with greater density. This also improved inner-platter speeds, where speeds are slower as the ring size decreases. Speed-wise the new Green topped the charts, offering a huge boost in sequential file transfers over the rest of the low-power 2TB drives we’ve tested.

Just like the LP that came before it, the Barracuda Green has high startup power requirements that can be a problem in large servers. The initial power needs of any system is greatest at startup when the hard drives spin up from a stand-still. If you can’t stagger the drives, you rely on sizing a power supply to handle the startup requirements of all the drives connected. Another concern relating to compatibility is the shift from 512-byte to 4K-alignment that the new Barracuda Green has introduced. As we have seen with some NAS units, not all are friendly with 4K-sectors. While not a problem for everyone, it is still something to consider as you look to purchase your next drive.

Overall we were very pleased with the 2TB Seagate Barracuda Green and see it becoming a popular drive in the NAS segment as price wars continue on the ever-growing low-power 2TB market. If Seagate offers a solution to enable a low-startup power setting–which other manufacturers have offered–this might be on of the nicest ‘Green’ drives sold today.

The Seagate Barracuda Green 2TB hard drive takes advantage of a three platter design, giving it an huge increase in speed over its older brother and a competitive edge in the 2TB low-power drive market.