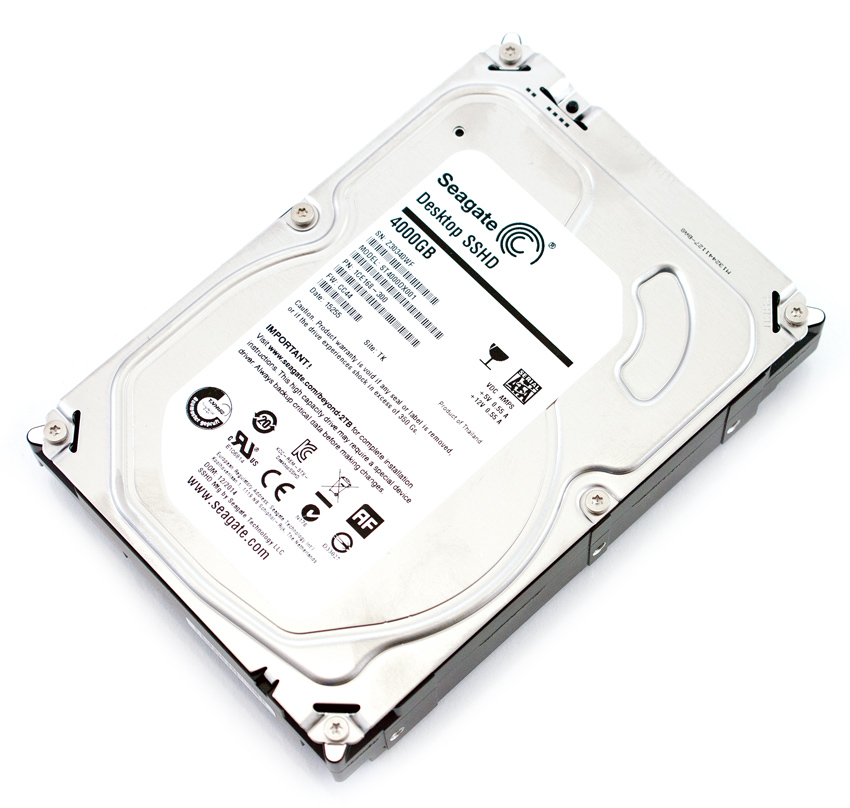 As far as its hardware goes, the Seagate hybrid drive is comprised of a 3.5-inch form factor and is equipped with SATA 6Gb/s Native Command Queuing technology (NCQ), allowing hard disk drives to internally optimize how received read and write commands are executed. Additionally, Seagate quotes an average read data rate of 146MB/s with a max sustained data rate of 180MB/s, which are noticeably better numbers than traditional hard disk drives.

The Seagate Desktop SSHD comes in capacities of 1TB, 2TB, and 4TB, priced at roughly $75, $95 and $150, respectively; all drives are backed by a limited 3-year warranty. We will be looking at the 4TB unit for this review.

Like all SSHDs, the Seagate Desktop hybrid drive looks virtually identical to a traditional HDD; the only difference being inside, which is equipped with 8GB of MLC NAND. All models, including the 4TB capacity, are of the 3.5″ form-factor, limiting its applications to Desktop computers. 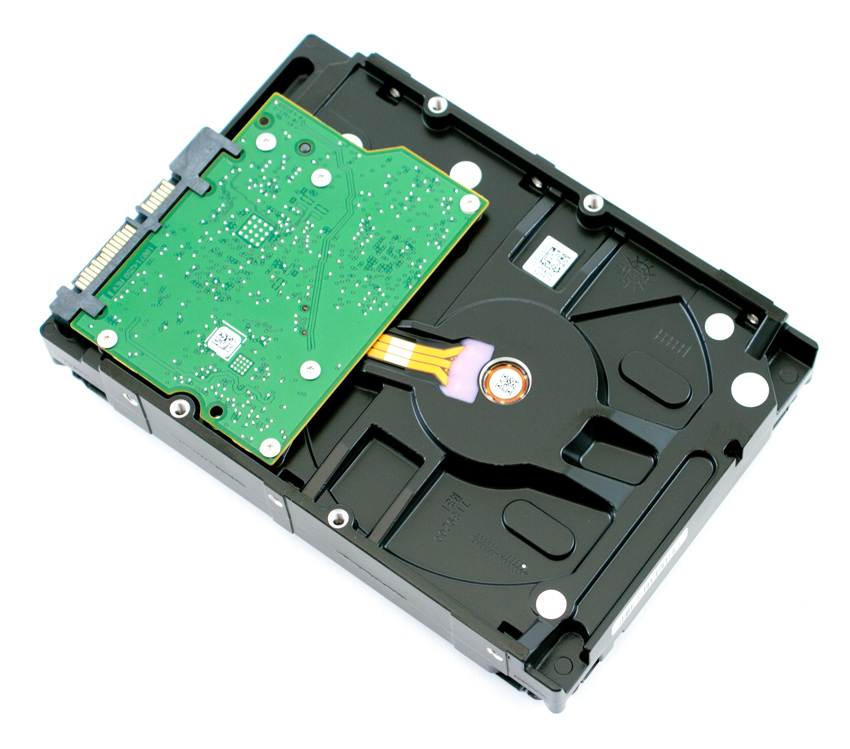 The design of the Seagate Desktop SSHD is consistent with other drives released by the company, displaying a white drive information label. The front of the drive shows the standard SATA and power connectors, while the sides are equipped with the usual screw holes for easy mounting. When turning the drive over, you will see the Seagate drive’s circuit board. 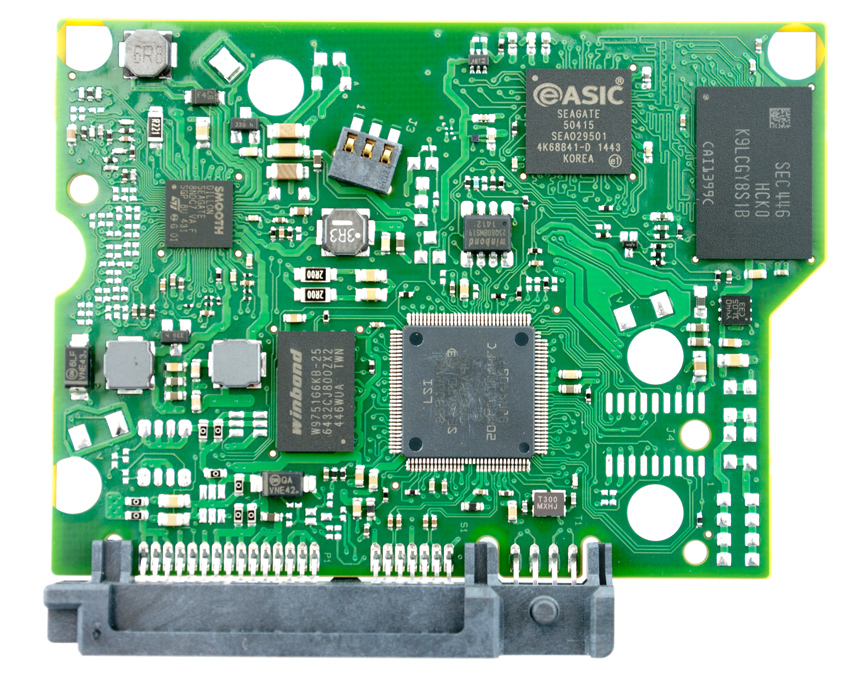 Removing the PCB board shows the LSI controller with its 8GB of NAND.

All consumer SSD benchmarks are conducted with the StorageReview HP Z620 Workstation. We compared Seagate Desktop SSHD with the following comparable:

Our next test looks at 2MB random transfer performance. In this scenario, we measured the Seagate with 63.64MB/s read and 73.49MB/s write while the WD Blue SSHD 4TB trailed again, posting reads and writes of 53.37MB/s and 64.48MB/s, respectively.

When looking at IOPS, the Seagate SSHD 4TB edged out the WD Blue in reads once again, scoring 60.62 IOPS; however, it recorded slower writes (113.95 IOPS) compared to the WD Blue 4TB model, which posted 124.67 IOPS.

Moving to our 4K write latency benchmark, which looks at both the average and maximum readings, the Seagate recorded slightly better max latency results with 1,356ms (maximum). The WD Blue SSHD 4TB showed an average latency of 8.02ms with maximum latency at 1,516.97ms. 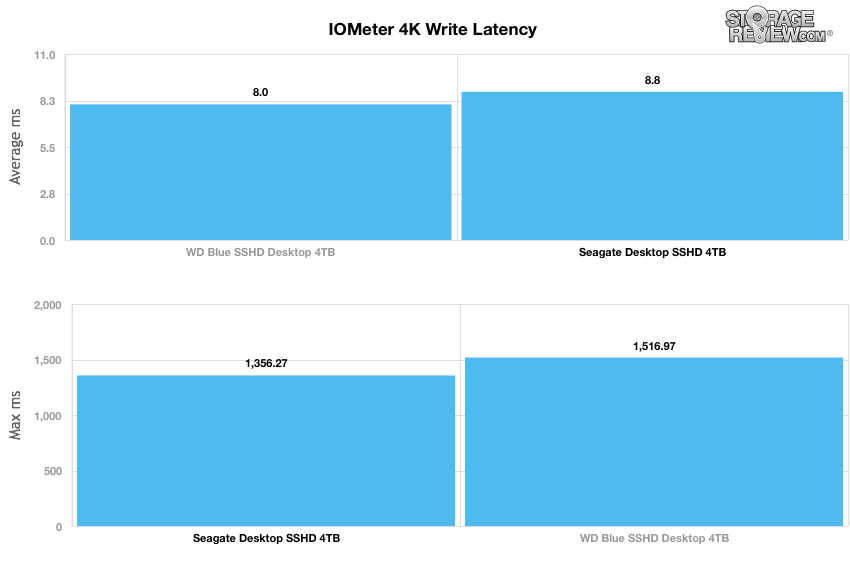 The first is our database profile; with a 67% read and 33% write workload mix primarily centered on 8K transfer sizes. In this scenario, though the Seagate recorded the superior burst speed, it ended up with only 118.28 IOPS in the terminal. The WD Blue 4TB posted an initial IOPS of 61.25 IOPS while the terminal queue depths measured 127.63 IOPS. 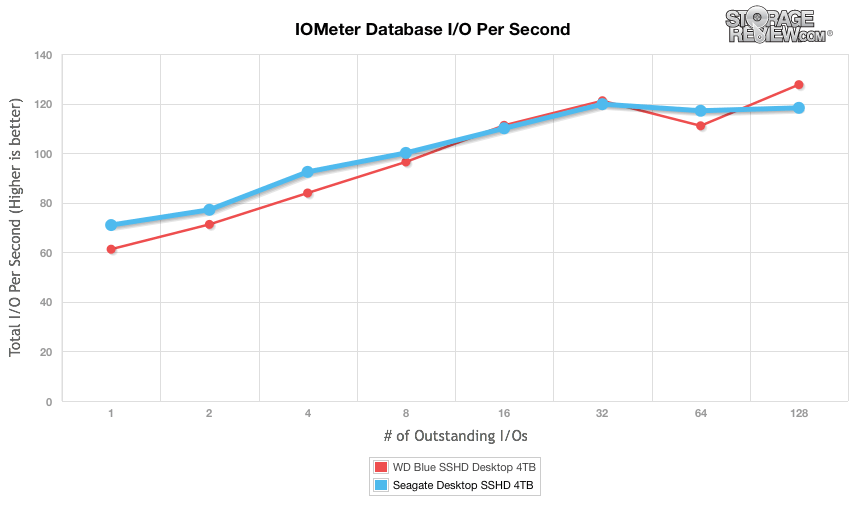 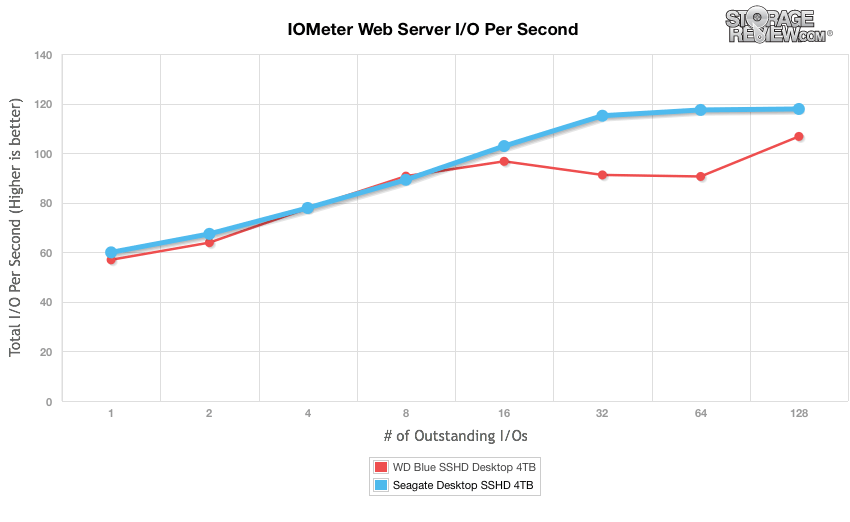 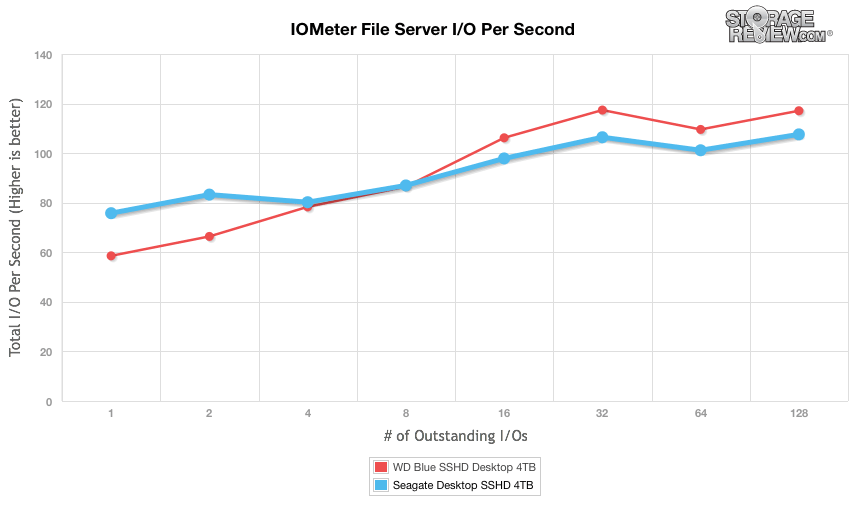 Our last profile looks at workstation activity, which is comprised of a 20% write and 80% read mixture using 8K transfers. In this benchmark, the Seagate drive posted slightly better results than the WD, with a range of 78.97 IOPS to 124.17 IOPS. The WD Blue 4TB SSHD drive started at the 68.93 IOPS mark but ended up with 120.15 IOPS at QD128. 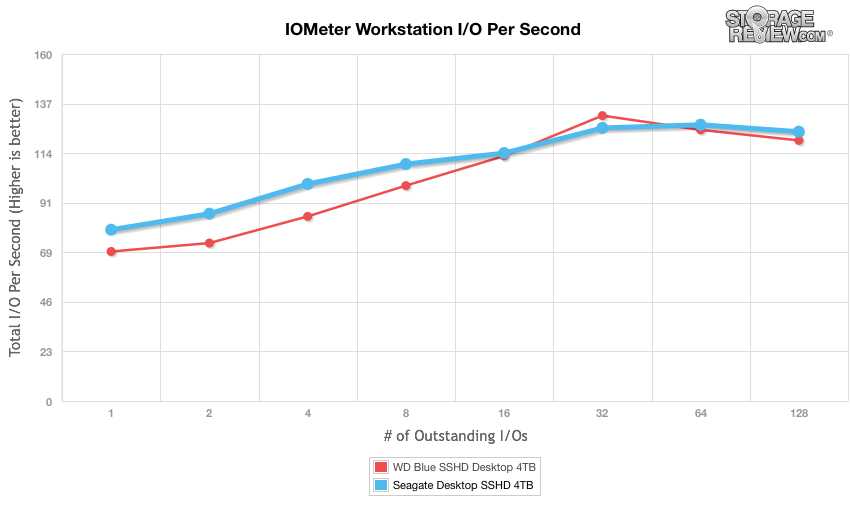 In our HTPC profile, the Seagate SSHD posted noticeably slower results than the WD Blue with just 67.21MB/s, 904 IOPS and 8.8ms in average latency. The WD Blue SSHD 4TB boasted 94.05MB/s and 1,265 IOPS while average latency was measured at 6.3ms. 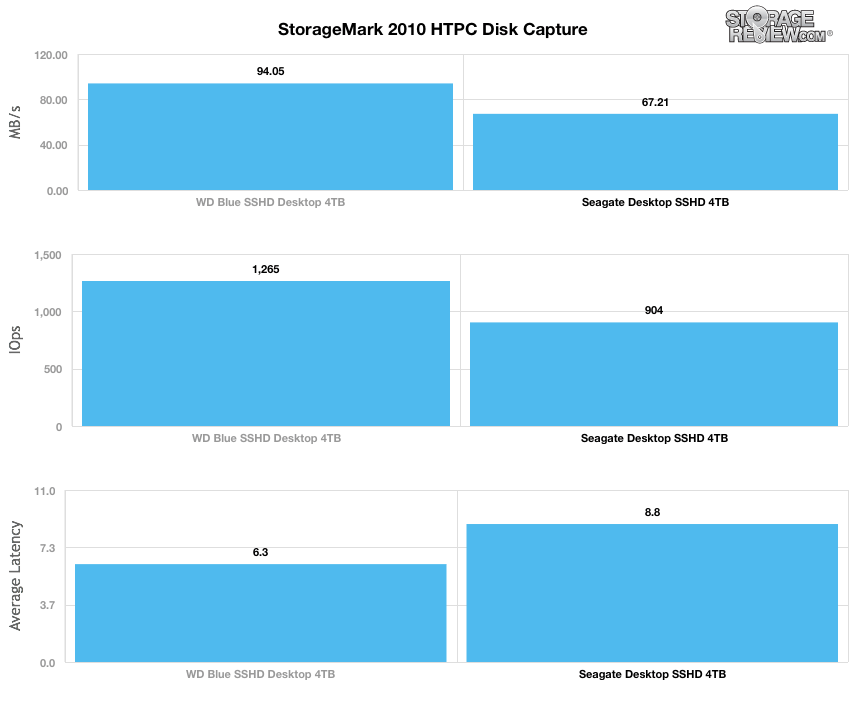 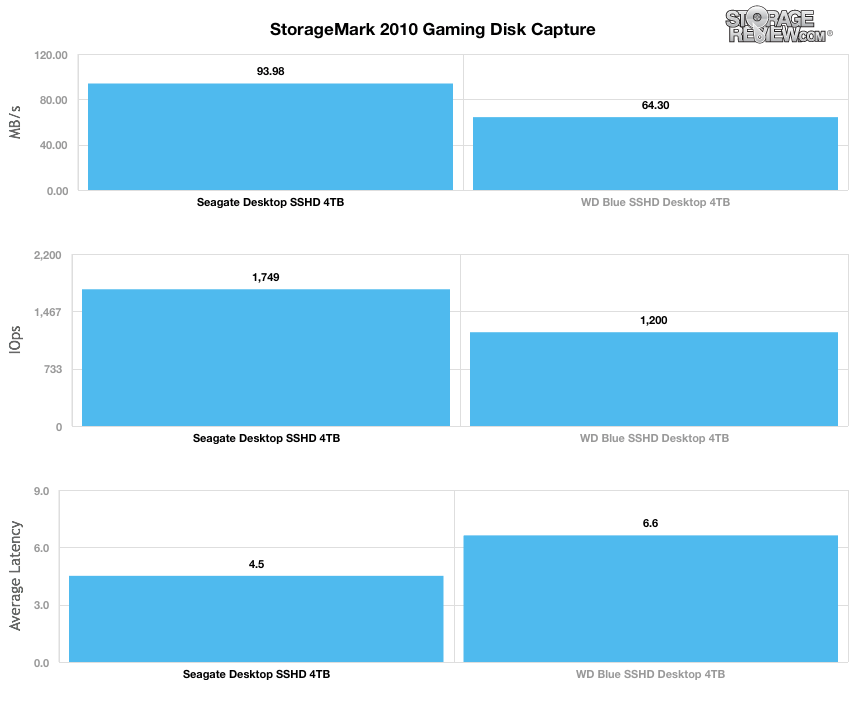 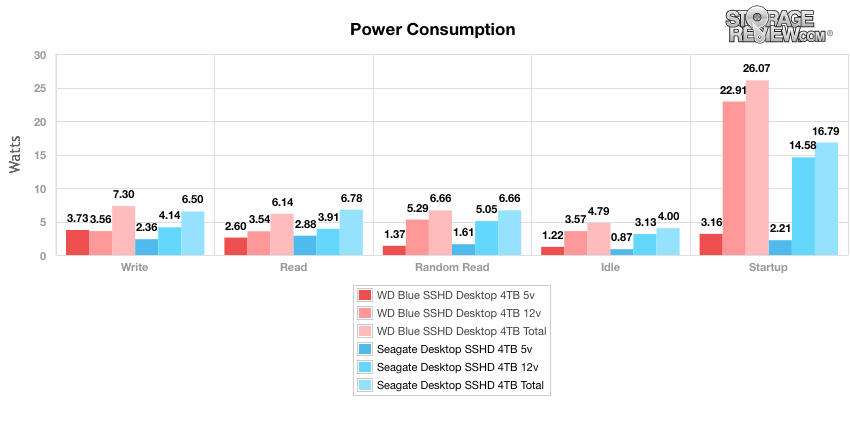 The Seagate Desktop SSHD is a 3.5 inch hybrid drive that combines HDD capacity with SSD performance. Designed for desktop PCs, workstations, and high-performance DAS devices, the Seagate drive is equipped with 8GB of NAND flash, allowing hot data to be kept on flash storage while less active data stored on the HDD. As result, consumers will experience speedy system boots, faster load times, and increased responsiveness compared to traditional HDD. Though this is nothing unique for an SSHD, the Seagate Desktop SSHD is fairly cheaper than its WD Blue comparable, going for roughly $50 dollars less ($150 vs. $200 for the 4TB capacity).

Diving into its performance, the two hybrid drives we compared posted results very similar to each other, though the Seagate offered better overall transfer speeds during mix workloads. In our 2MB sequential transfer benchmark, the Seagate Desktop SSHD measured 156.28MB/s read and 154.28MB/s write while random speeds of the same file size reached 63.64MB/s read and 73.49MB/s write. In our consumer real-world benchmarks, however, the Seagate drive was handily beaten by the WD Blue in the HTPC scenario. Here, the Seagate SSHD posted just 67.21MB/s, 904 IOPS and 8.8ms in average latency for the latter compared to the WD Blue’s 94.05MB/s, 1,265 IOPS, and 6.3ms. Gamers should certainly take note of our gaming profile benchmark, as results showed a massive increase to 93.98MB/s, 1,749 IOPS, and an average latency of 4.5ms compared to the WD Blues’s recorded 64.30MB/s, 1,200 IOPS, and 6.6ms.

The Seagate Desktop SSHD is a good performing hybrid drive that offers consumers 8GB of NAND flash for increased overall system performance as well as a high capacity point.