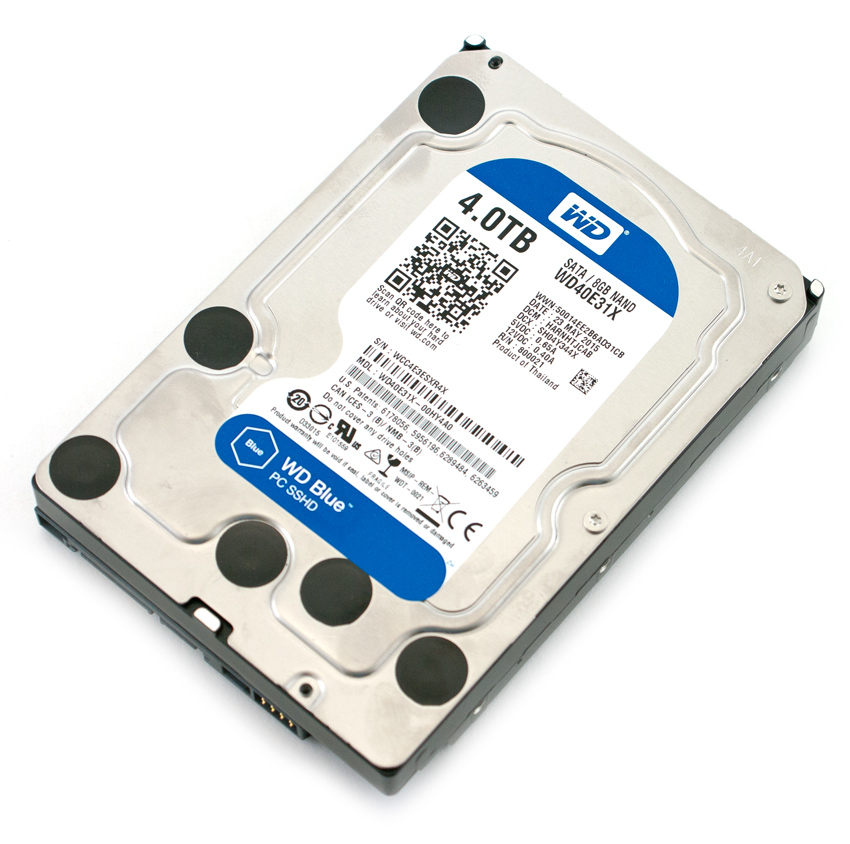 Though certainly not as fast as full SSDs, hybrid drives offer enough NAND flash SSD technology to see a noticeable improvement in system boots, faster application loads, and an overall improved responsiveness over hard disk drive technology. However, the relevance of SSHDs (as well as HDDs) have been dwindling over the years, as the performance –heavy SSDs are continuously closing the gap between price and certainly have reached capacity parity with many brands. That being said, the WD Blue line is still less expensive than their SSD counterparts, which is enough to sway many consumers to go the SSHD route when upgrading their rig.

As such, WD has indicated that the WD Blue SSHD uses an advanced set of algorithms to track user data-usage, which then analyzes this information and prioritizes frequently used data; simply put, the 8GB of NAND store a pool of “hot” data for enhanced performance in the solid state portion of the device. It adapts, learns and optimizes as new applications and command requests alter over its life-span.

The WD Blue SSHD line comes in 1TB and 4TB capacities in 2.5 inch and 3.5 inch form factors, respectively. We will be looking at the 4TB Desktop model for this review, which comes with a 3-year warranty and a street price of $195.

At first glance, the WD Blue SSHD looks like any other standard HDD; however, it is equipped with 8GB of NAND cache on the PC, which allows for a boost in performance. Because of its higher 4TB capacity, this model of the WD Blue is of the 3.5″ form-factor, making it compatible with most desktop PCs. 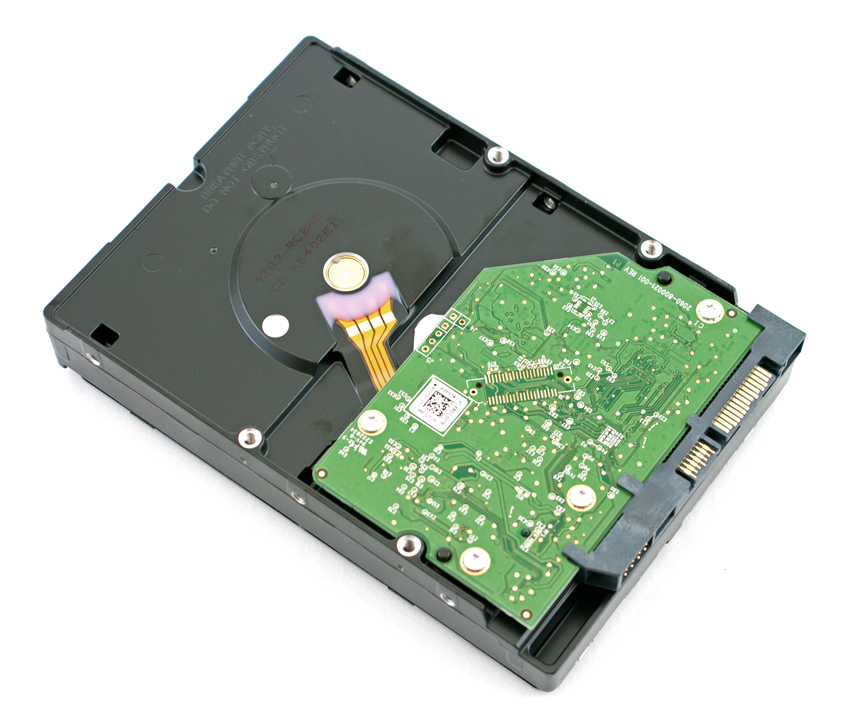 Looking at the top side of thedrive, the Blue SSHD is consistent with all of the recent WD releases sporting a white drive information label with blue branding. The front of the drives has the standard SATA and power connectors while the sides show 4 screw holes for easy mounting. When you turn the drive over, the drive’s circuit board will be visible. 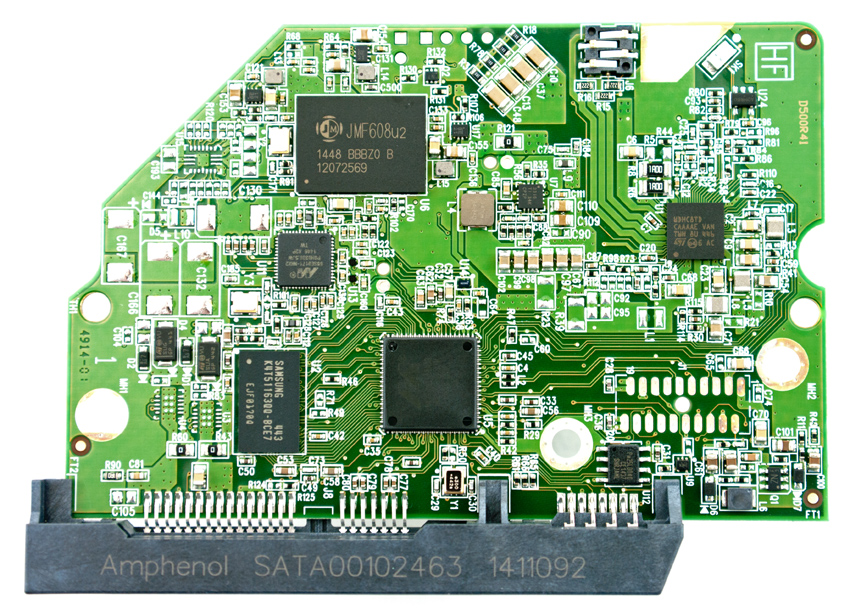 When the PCB is removed, you will see the Marvell HDD controller as well as the JMicron controller with its 8GB of NAND cache.

Our next test looks at 2MB random transfer performance. In this scenario, the WD Blue SSHD 4TB trailed the Seagate 4TB again, measuring reads and writes of 53.37MB/s and 65.48MB/s, respectively. The Seagate recorded 63.64MB/s read and 73.49MB/s write.

When looking at IOPS, the WD Blue 4TB model posted 56.72 IOPS read and another leading 124.67 IOPS for writes. The Seagate SSHD 4TB edged out the WD Blue in the read column again with 60.62 IOPS, though recorded slower writes (113.95 IOPS).

Moving to our 4K write latency benchmark, which looks at both the average and maximum readings, the WD Blue SSHD 4TB showed an average latency of 8.02ms with maximum latency at 1,516.97ms. The Seagate recorded 8.8ms (average) and 1,356.27ms (maximum). 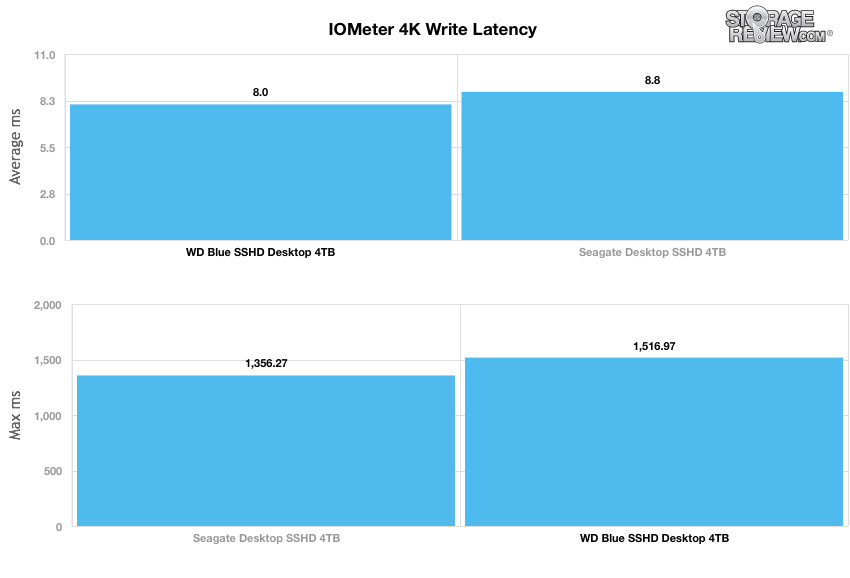 The first is our database profile, which uses a 67% read and 33% write workload mix primarily centered on 8K transfer sizes. In the scenario, the WD Blue 4TB posted an initial IOPS of 61.25 IOPS while the terminal queue depths hit a leading 127.63 IOPS. Though the Seagate had a better recorded burst speed, it ended up with only 118.28 IOPS in the terminal. 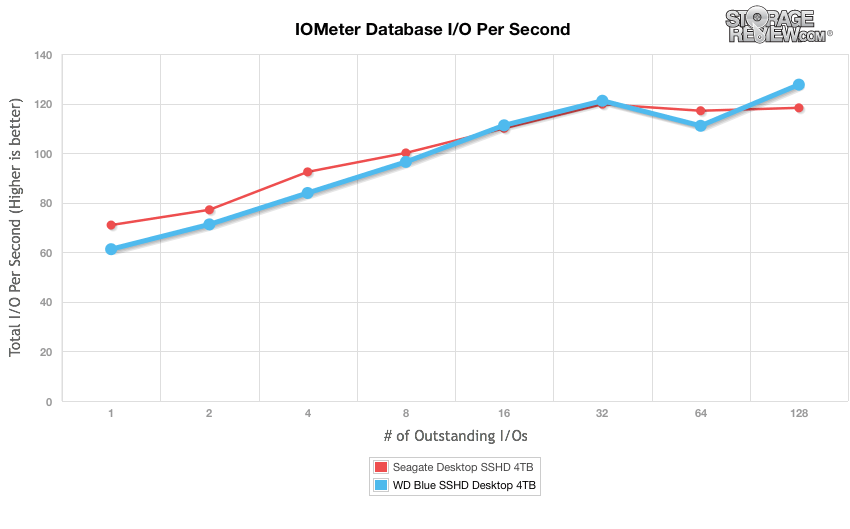 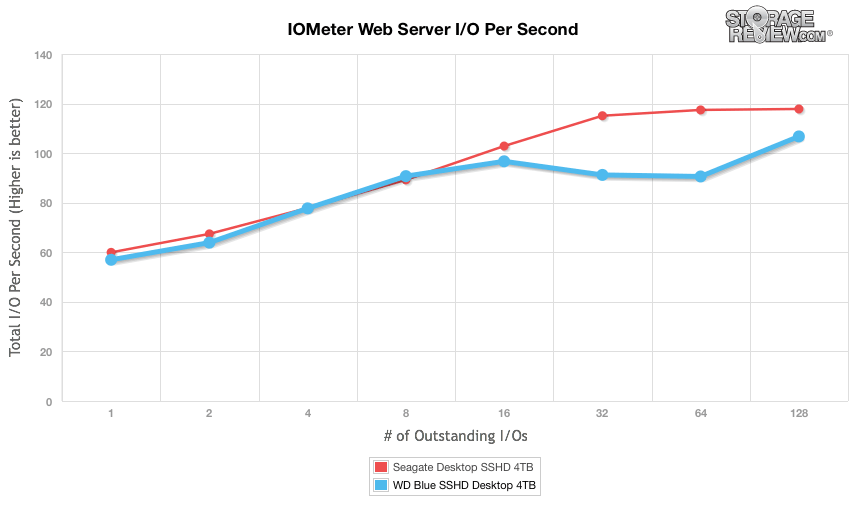 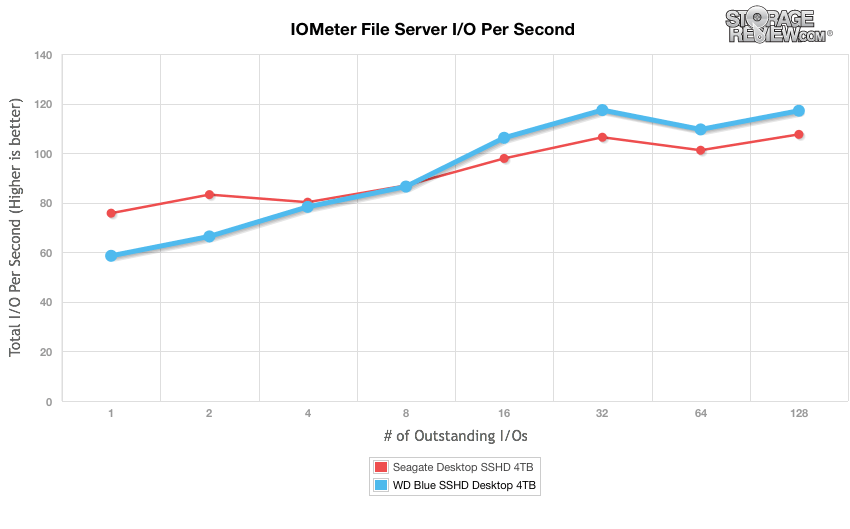 Our last profile looks at workstation activity, which is comprised of a 20% write and 80% read mixture using 8K transfers. The WD Blue 4TB SSHD drive started at the 68.93 IOPS mark and ended up with 120.15 IOPS at QD128. The Seagate drive posted slightly better results with a range of 78.97 IOPS to 124.17 IOPS.

In our HTPC profile, the WD Blue SSHD 4TB posted noticeably better results than its Seagate comparable, clocking in at 94.05MB/s and 1,265 IOPS while average latency was calculated at 6.3ms. The Seagate SSHD posted just 67.21MB/s, 904 IOPS and 8.8ms in average latency. 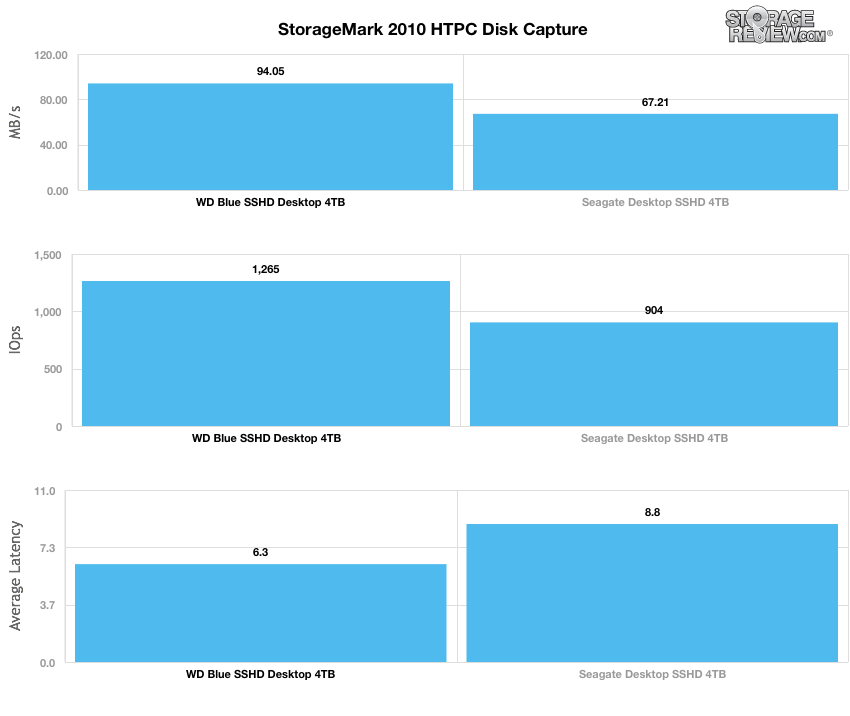 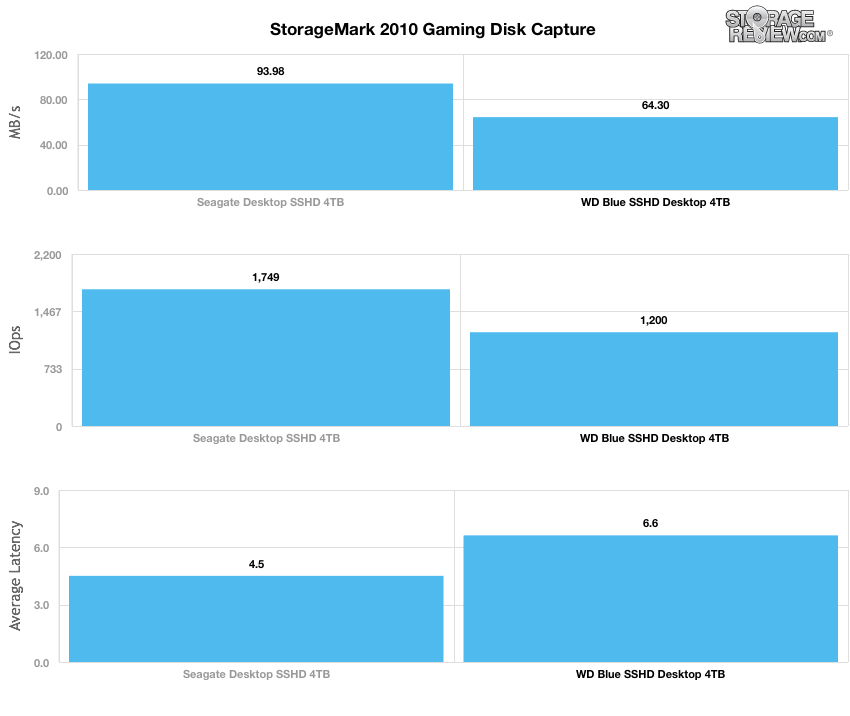 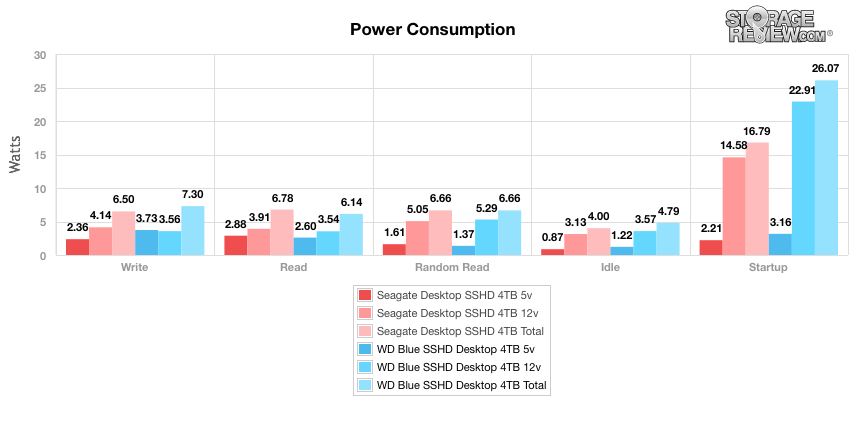 The 4TB WD Blue hybrid drive is designed to offer an improvement in overall performance for desktop workstations, including faster boot ups and faster application load times; both of which are ideal for demographics like gamers and content creators. As mentioned earlier, SSHDs are a far cry from full solid-state technology when looking at speed and responsiveness goes; however, they are equipped with enough NAND flash technology to see an improvement with every day use all the while reaping the benefits of the higher HDD storage capacity at a lesser cost. Though SSDs are starting close these gaps as years and technology progress, hybrid drives seem to still be relevant due to their much lower cost.

When diving into its performance, the 4TB WD Blue posted 142.86MB/s read and 142.79MB/s write when measuring 2MB sequential, while random transfer speeds hit 53.37MB/s read and 65.48MB/s write, both of which are roughly one third the performance of most consumer-grade SSDs. Overall, its consumer synthetic benchmarks were weaker than its direct competitor, the 4TB Seagate Desktop SSHD; however, the WD Blue’s real-world performance gave us a better HTPC as it posted results of 94.05MB/s and 1,265 IOPS while average latency was calculated at 6.3ms during our HTPC workload (compared to the Seagate’s 67.21MB/s, 904 IOPS and 8.8ms in average latency). However it lagged behind the Seagate in our gaming benchmark.

Ultimately, the 4TB WD Blue SSHD is a worthy choice for a niche part of the storage market: power-consumers looking to upgrade their desktop system with a high-capacity, high performing drive, but aren’t looking to pay the premium price of SSDs, which can get pretty expensive.

The WD Blue SSHD is inexpensive choice for those looking to upgrade the performance of their desktop system all the while adding 4TB in storage.