The Seagate Enterprise Capacity 6TB V.4 is billed as the “world’s fastest” nearline HDD currently on the market, with claims of performance 25% over competitive offerings. With an operating speed of 7200RPM, the Seagate V.4 also comes in 5TB, 4TB and 2TB flavors. Each type can be purchased with either 12Gb/s SAS or 6Gb/s SATA connectivity, allowing it to be easily integrated into current systems. Seagate also supports optional SED and FIPS encryption.

The Seagate Enterprise Capacity 6TB V.4 is billed as the “world’s fastest” nearline HDD currently on the market, with claims of performance 25% over competitive offerings. With an operating speed of 7200RPM, the Seagate V.4 also comes in 5TB, 4TB and 2TB flavors. Each type can be purchased with either 12Gb/s SAS or 6Gb/s SATA connectivity, allowing it to be easily integrated into current systems. Seagate also supports optional SED and FIPS encryption. 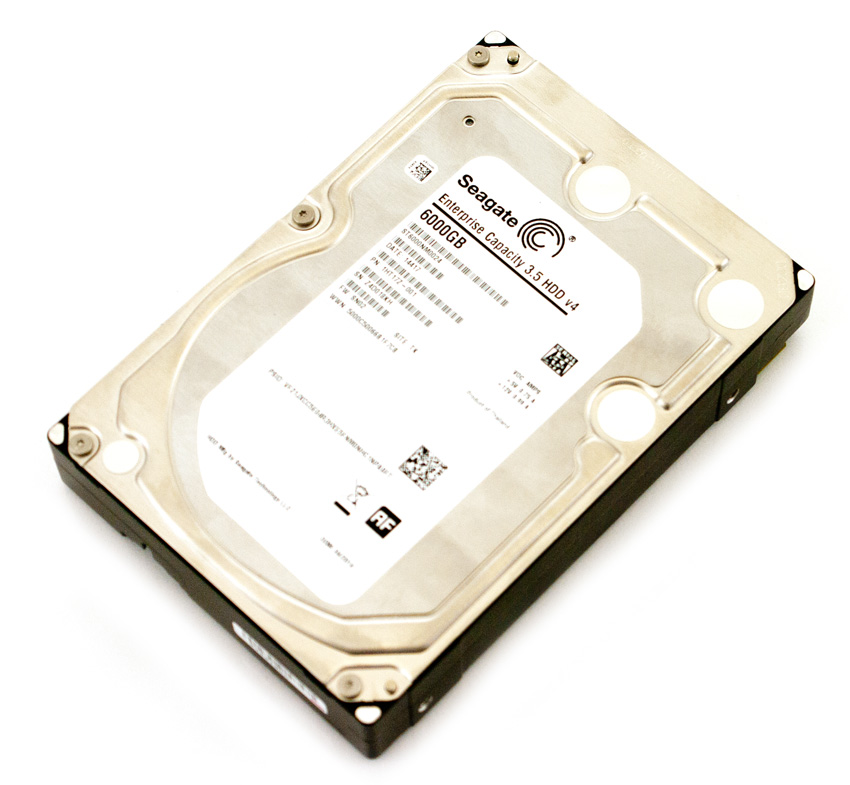 High quality and reliable storage needs are exploding to new levels. While companies can continue to add 4TB HDDs there is an upper limit to the amount that can be added to an existing network. With the Seagate 6TB V.4, users can add 50% additional storage into the same rack U space. Not only will users get 2TB of extra space per HDD in a given footprint, users can choose from SED or government-grade SED FIPS 140-2 all with Seagate’s Instant Secure Erase technology. Built on field-proven, eighth-generation platforms, the Seagate Enterprise Capacity 6TB V.4 is made to deliver high capacity storage, 24×7 reliable storage without sacrificing performance

The Seagate Enterprise Capacity 6TB 3.5 HDDv4 comes with a 5-year limited warranty and has a street price of about $600.00 at the time of this review. Our review comprises 16 of the 6TB drive with SATA interface.

The Seagate Enterprise Capacity 6TB hard drives have a similar appearance to standard counterparts. The drives aren’t flashy; they are functional. The top of the drive is all silver with an inlay in the center adding protection to the drive head. Also featured on the top, there are six screws enabling access to the internal parts of the drive. 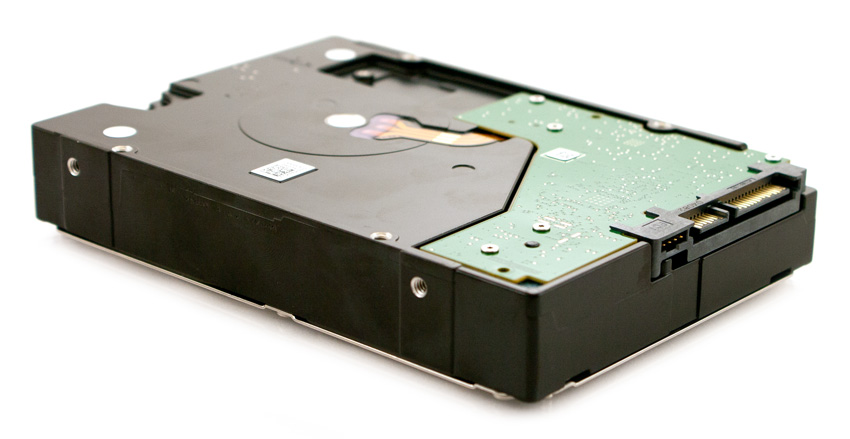 Most notable from a design perspective is that to make room for the sixth platter, Seagate had to move the center screw holes. They’re gone on the sides entirely, and the ones on the bottom have moved to the back. There’s a chance this could make the drives incompatible with tool-less drive trays and older trays that have not accounted for the move to a rear mounting point on the bottom of the drive. 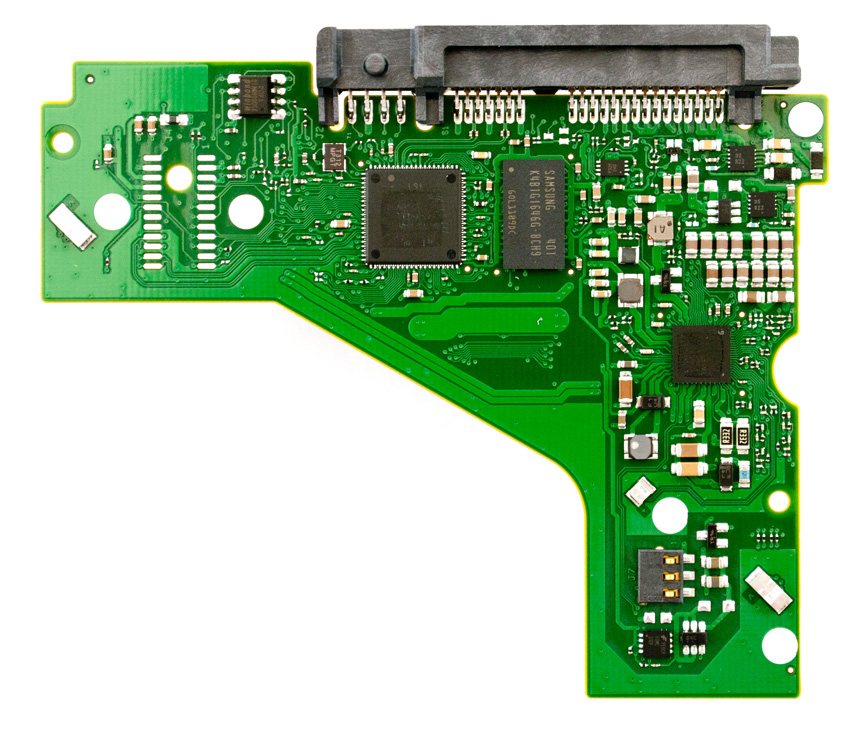 For our testing we used 16 x SATA Seagate 6TB HDDs.

In the enterprise market, there is a huge difference between how products claim to perform on paper and how they perform in a live production environment. We understand the importance of evaluating storage as a component of larger systems, most importantly how responsive storage is when interacting with key enterprise applications. To this end, we’ve rolled out application tests including our MySQL performance via SysBench and SQL Server performance via Benchmark Factory.

Our first application test consists of Percona MySQL database test via SysBench, which measures the performance of OLTP activity. In this testing configuration, we use a group of Lenovo ThinkServer RD630s and load a database environment onto a single SATA, SAS or PCIe drive or a group of HDDs using an LSI 9286-8e RAID card. This test measures average TPS (Transactions Per Second), average latency, as well as average 99th percentile latency over a range of 2 to 32 threads. Percona and MariaDB are using the Fusion-io flash-aware application APIs in the most recent releases of their databases, although for the purposes of this comparison we test each device in their “legacy” block-storage modes.

With a working database footprint of about 333GB, we looked at the performance in both RAID10 using the Seagate Enterprise Capacity 6TB. The Seagate 6TB ran a little on the lower end to middle here, peaking at 332.34TPS, outperforming the WD RE4 and Se comparables. 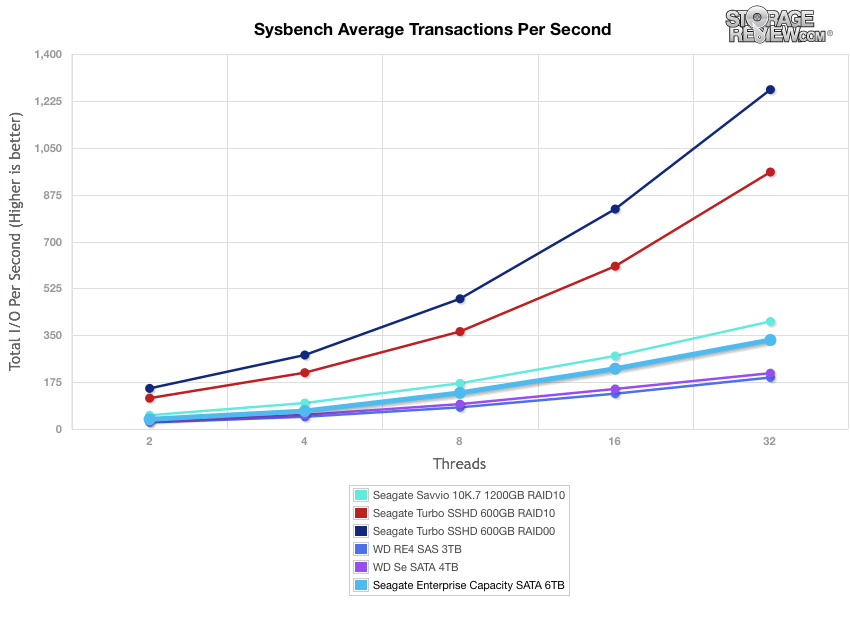 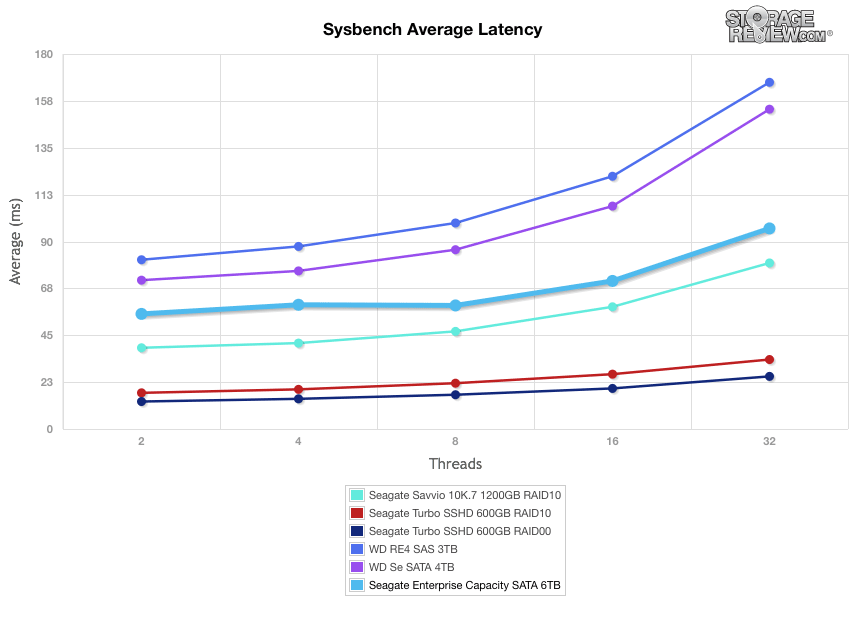 Comparing the 99th percentile latency in during the TPC-C Sysbench test, similar results to those above can bee seen with the Seagate 6TB running better than the WD SAS and SATA comparables. 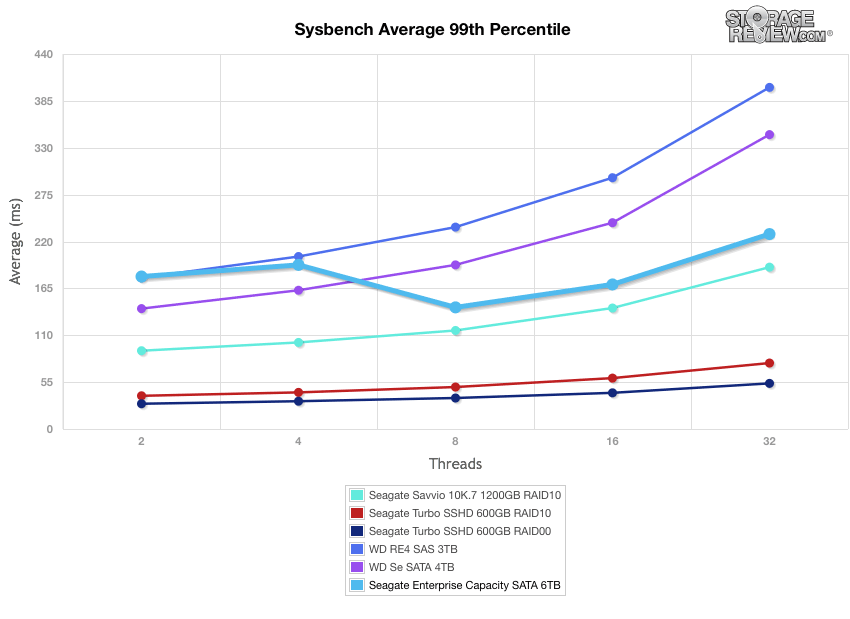 Looking at the transactional performance of each drive configuration, the Seagate 6TB holds its own coming in at just under 3,000TPS again beating out the WD drives and closely trailing the Seagate Savvio 10K.7 drives.

Comparing average latency between each storage configuration, we once again see similar results.

In the first of our enterprise workloads, we measured a long sample of random 4k performance with 100% write and 100% read activity to get our peak sustained random I/O results. The Seagate Enterprise Capacity 6TB came out on top in both write and read performance with 234IOPS and 155IOPS respectively.

In our main average latency segment with a load of 16T/16Q, again the Seagate 6TB out performed the others having the lowest write and read average latency, at 1090.56ms and 1644.29ms, respectively

Measuring just read activity, the Seagate 6TB fell to third in max latency with a read speed of 5172ms. Both the Western Digital Se 4TB and the HGST Ultrastar He6 6TB beat it out but only by about 60ms. On the other hand it came in best with write max latency having a speed of 2589ms.

Compared to the fixed 16 thread, 16 queue max workload we performed in the 100% 4k write test, our mixed workload profiles scale the performance across a wide range of thread/queue combinations. In these tests, we span workload intensity from 2 threads and 2 queue up to 16 threads and 16 queue. In the expanded 8k 70/30 test, the Seagate 6TB had the greatest throughput throughout peaking at 214IOPS.

Looking over the 8k 70/30 average response times, the Seagate 6TB had the lowest latency throughout coming out on top again. 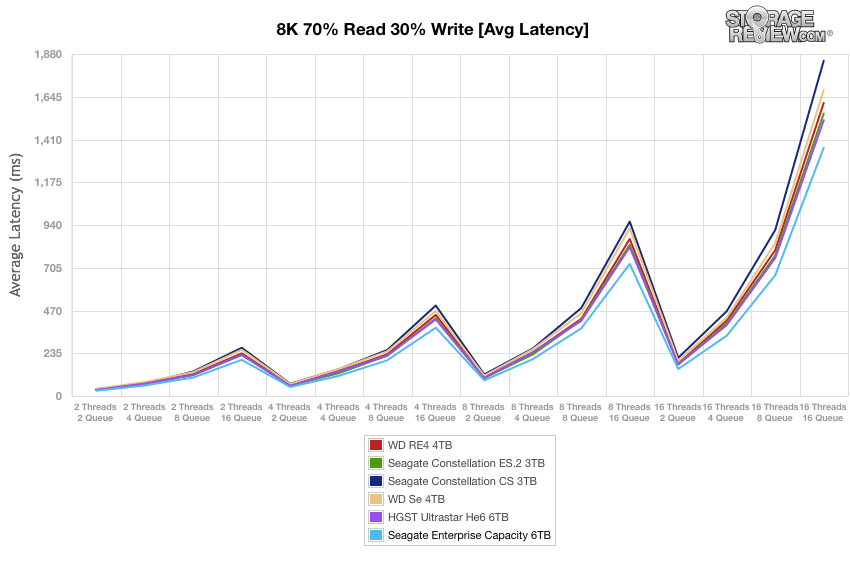 Over the duration of our primary tests at varying thread and queue depth levels, the Seagate 6TB ran near the top of the pack throughout and had the lowest average max latency speed of all HDDs. 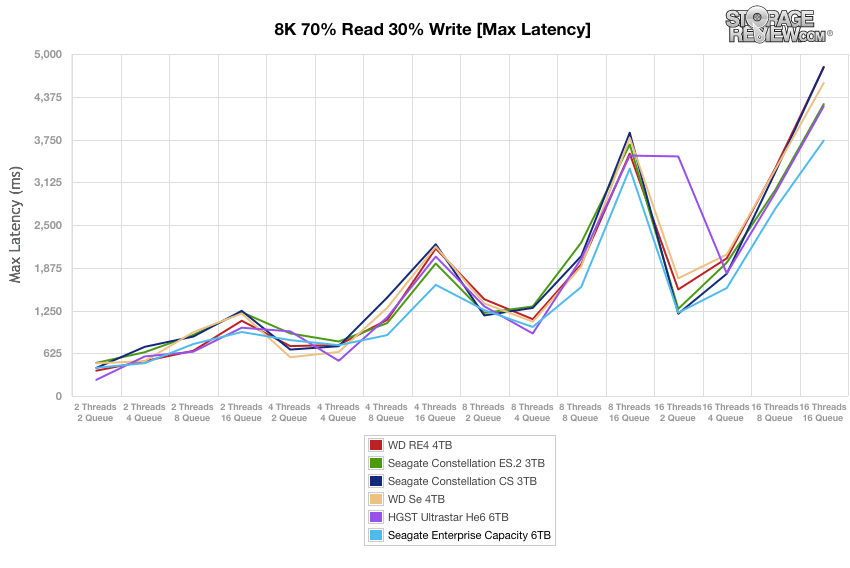 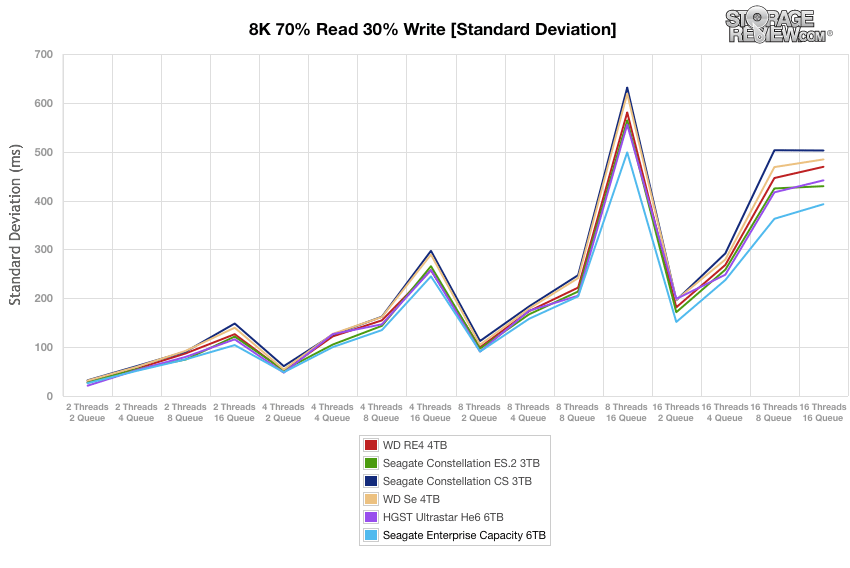 Our Enterprise Synthetic Workload 128K test is a large block sequential test that shows the highest sequential transfer speed for a platter drive. Looking at 128K performance of 100% write and 100% read activity, the Seagate 6TB boasted impressive numbers with 223,053KB/s read and 222,666KB/s write, taking top spot in both categories well ahead of the other HDDs.

The Seagate Enterprise Capacity 6TB V.4 is a 3.5” HDD with 7200 RPM spindle and Seagate’s proven reliability. It comes in multiple models including other capacity such as 5TB, 4TB, and 2TB with either 12Gb/s SAS or 6Gb/s SATA connectivity for easy integration. The drive is FIPS SED certified for maximum security. The Seagate Enterprise Capacity 6TB V.4 3.5” HDD is ideal for business that want to increase their overall capacity while staying within the same footprint.

Overall we saw the Seagate Enterprise Capacity 6TB perform strong in our enterprise testing and ran strong against similar HDDs in our application performance analysis. In our 4K random performance, the Seagate 6TB came out on top with 234IOPS write and 155IOPS read. It also had the greatest throughput in our 8K 70/30 test. And  overall the Seagate had the lowest average latency of the drives tested. In our 128K synthetic workload the Seagate 6TB put out some pretty impressive numbers with 223MB/s in both read and write putting it at the top of the group.

The 6TB world is pretty thin, only HGST ships a competing product that is also available with SATA or SAS interface. The problem for HGST though, is that today their platform is new technology, which means unproven. Seagate has gone with a traditional design and is also significantly faster and less expensive by a wide margin. The helium drive has a power draw benefit, but it’s generally outclassed by Seagate in most use cases. HGST’s decision to go with sealed drive technology may tilt back in their favor when they’re able to go to 8TB and 10TB on this platform, but that’s an argument for another day. Today, if you need 6TB and want the fastest and least expensive, Seagate is the clear winner.

The Seagate Enterprise Capacity 6TB 3.5 HDDv4 is a well performing high capacity drive, a drive that can add up to an additional 50% capacity over current drives with a relatively low price point and all the interface and security features the enterprise wants.