written by StorageReview Consumer Desk May 30, 2014

The Seagate Enterprise Capacity SAS 6TB hard drive comes with a 7,200 RPM spindle speed and can be paired with either a 6Gb/s or 12Gb/s SAS interface. We recently reviewed the sibling 6TB SATA drive; this review will survey the drive with a 12Gb/s SAS interface. The SAS configuration is also available in 4TB and 2TB capacities, and Seagate boasts this drive as the fastest available nearline HDD, which they proved to be true with the SATA version. All that's left to discover is what effect the interface has on the drive, all other mechanics are the same eighth generation technology.

The Seagate Enterprise Capacity SAS 6TB hard drive comes with a 7,200 RPM spindle speed and can be paired with either a 6Gb/s or 12Gb/s SAS interface. We recently reviewed the sibling 6TB SATA drive; this review will survey the drive with a 12Gb/s SAS interface. The SAS configuration is also available in 4TB and 2TB capacities, and Seagate boasts this drive as the fastest available nearline HDD, which they proved to be true with the SATA version. All that's left to discover is what effect the interface has on the drive, all other mechanics are the same eighth generation technology. 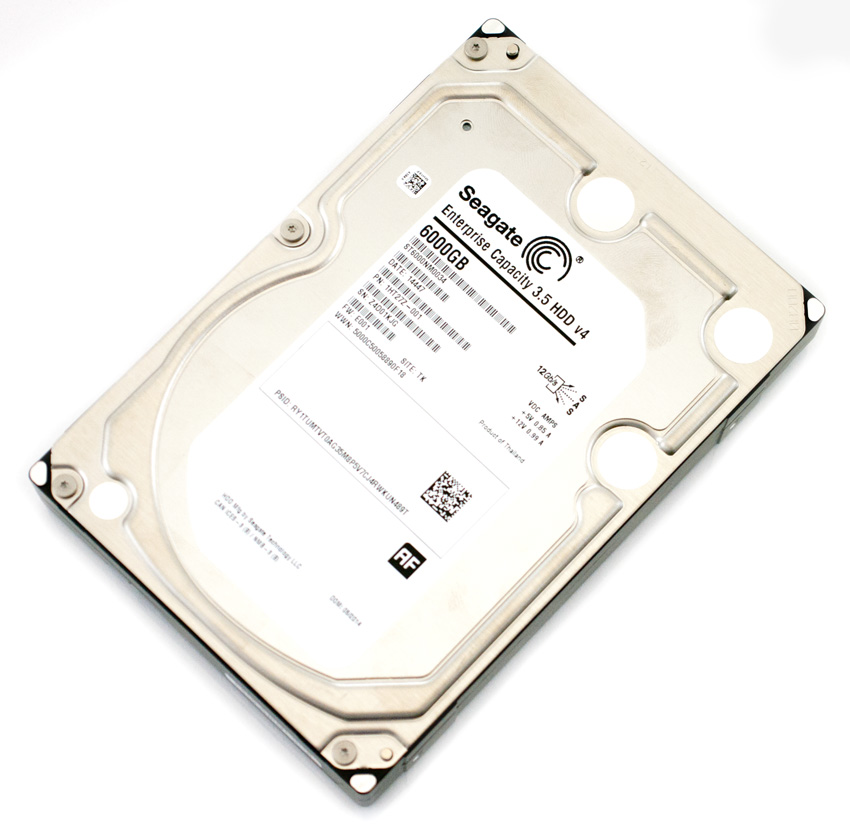 It's important to note that as the battle for HDD capacity rages on, Seagate has taken traditional steps to ensure higher drive capacities. HGST on the other hand, the only other vendor currently shipping 6TB, leverages helium inside the drive to allow for tighter spacing of the platters and less drag. The enterprise is slow to change, so at least in the short term, Seagate has a design advantage with the V.4 Enterprise Capacity hard drives.

Seagate lets users choose from SED or government-grade SED FIPS 140-2 all with Seagate’s Instant Secure Erase technology, in the even they would like more security. The drives can also ship without encryption. Enterprise Capacity drives have a 5-year warranty.

As expected, the SAS Enterprise Capacity drives are nearly identical to the SATA drives, the only two exceptions being the branding designation on the top and the physical interface on the bottom.

The top of the drive is silver with some indentations and a white sticker featuring some specs, branding, and the serial numbers. The bottom of the drive is mostly black but has the exposed circuit board to which the SAS interface is attached. 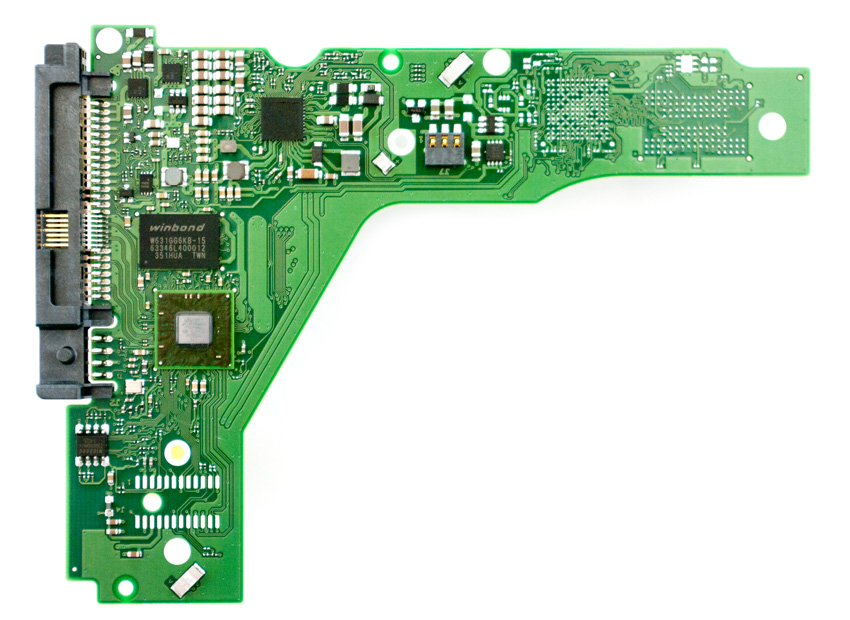 For our testing we used 16 x SAS Seagate 6TB HDDs.

In the enterprise market, there is a huge difference between how products claim to perform on paper and how they perform in a live production environment. We understand the importance of evaluating storage as a component of larger systems, most importantly how responsive storage is when interacting with key enterprise applications. To this end, we've rolled out application tests including our MySQL performance via SysBench and SQL Server performance via Benchmark Factory.

Our first application test consists of Percona MySQL database test via SysBench, which measures the performance of OLTP activity. In this testing configuration, we use a group of Lenovo ThinkServer RD630s and load a database environment onto a single SATA, SAS or PCIe drive or a group of HDDs using an LSI 9286-8e RAID card. This test measures average TPS (Transactions Per Second), average latency, as well as average 99th percentile latency over a range of 2 to 32 threads. Percona and MariaDB are using the Fusion-io flash-aware application APIs in the most recent releases of their databases, although for the purposes of this comparison we test each device in their "legacy" block-storage modes.

With a working database footprint of about 333GB, we looked at the performance in both RAID10 using the Seagate Enterprise Capacity 6TB. The Seagate SAS 6TB was one of the slower drives in this test, peaking at slightly under 350TPS. It was in the same range as the Seagate SATA 6TB; they both outperformed the WD Red drives and were outperformed by the Seagate Savvio 10K.7 and Seagate Turbo drives. 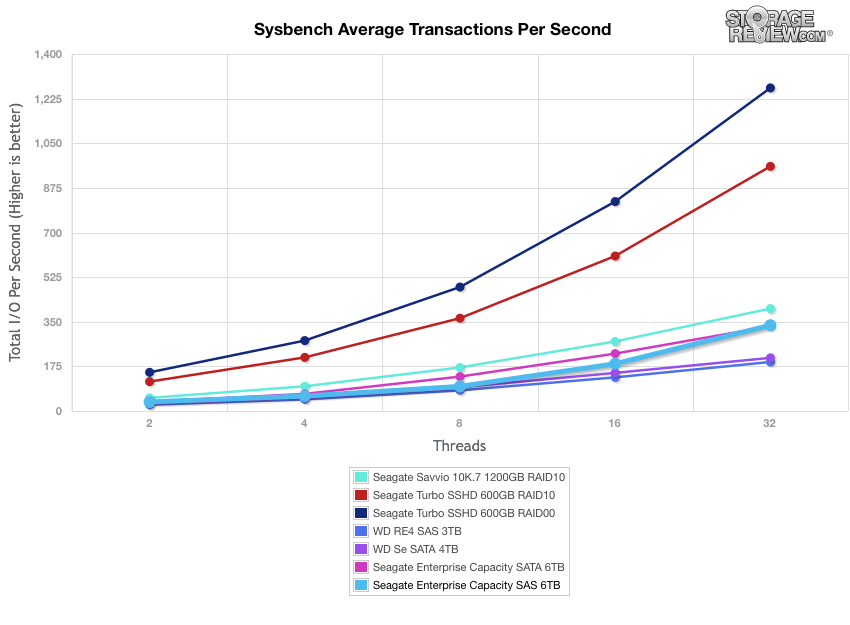 Measuring average latency in our Sysbench MySQL test, both the SAS and SATA configurations of the Seagate 6TB were in the middle of the pack. The Seagate SATA 6TB was slightly faster during most of the testing, but the Seagate SAS 6TB configuration started to outpace it towards the end. The Seagate Turbo drives and the Seagate Savvio 10K.7 were the top performers, and the WD drives were the slowest tested. 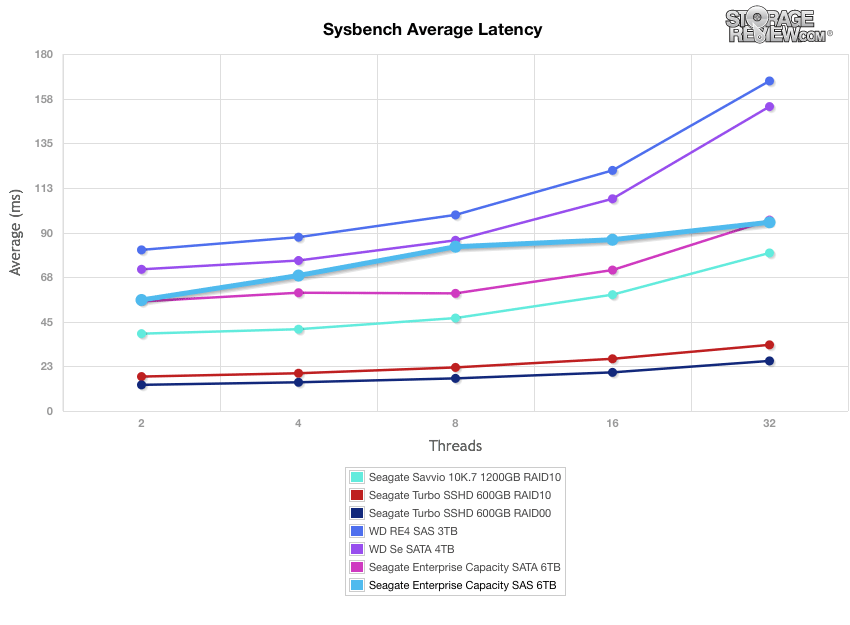 For the most part, the Seagate SAS 6TB slipped to last place in terms of 99th percentile latency, although its performance improved relative to the other drives through the test. It ended up in the middle of the pack again with the same latency as the Seagate SATA 6TB. The other drives showed the same performance as in the previous Sysbench tests. 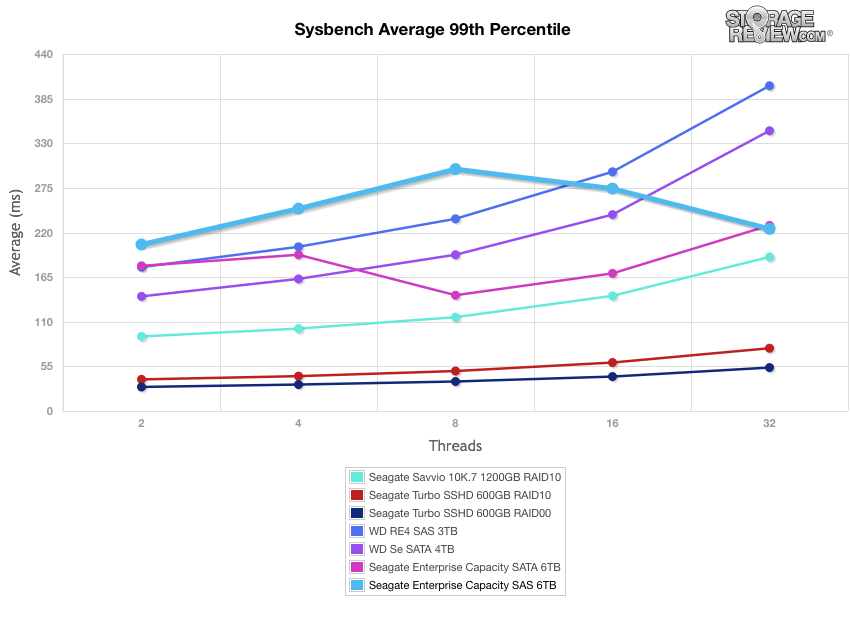 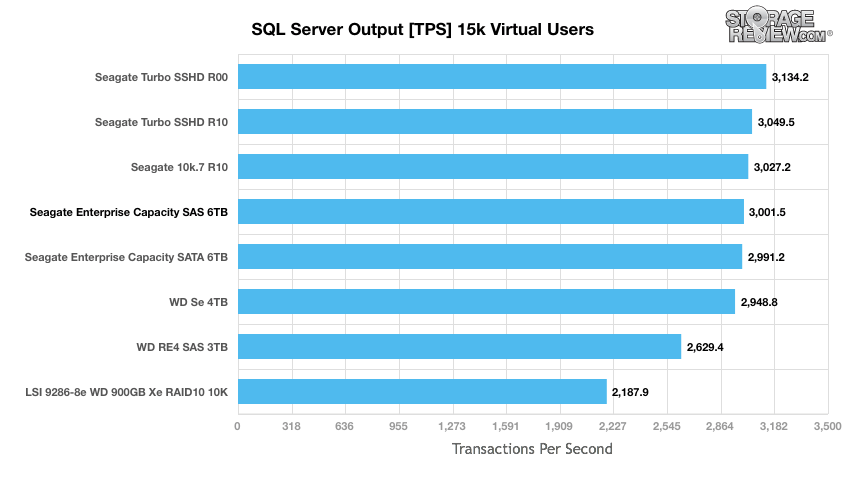 The standings of the average latency test are identical to those of the TPS measurement. 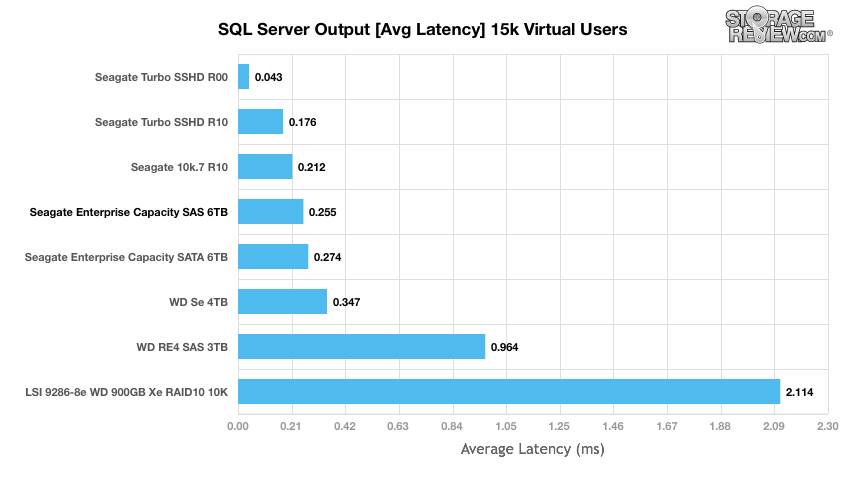 In the first of our enterprise workloads, we measured a long sample of random 4k performance with 100% write and 100% read activity to get our peak sustained random I/O results. The Seagate 6TB drive was among the top three read performers for this benchmark with 252IOPS; it was barely edged out by the Toshiba 4TB SAS (255IOPS) and Toshiba 3TB SAS (256IOPS). It was the top performer in write functions with 227IOPS. The next best performer was the Hitachi 7K4000 4TB SAS with 205IOPS.

Once again, the Seagate 6TB was the third fastest drive in read functions with 1010ms, behind the Toshiba 4TB SAS (1000ms) and Toshiba 3TB SAS (996ms), and it was the fastest in terms of write functions with 1120ms.

The Seagate 6TB showed relatively higher read numbers in this benchmark than in the average latency measurements; it, along with the Toshiba 4TB SAS and Toshiba 3TB SAS, were the three slowest drives tested, with 4,000ms, 4,100ms, and 4,070ms, respectively. Despite this, the Seagate 6TB did show the fastest write performance, with 1,700ms.

Compared to the fixed 16 thread, 16 queue max workload we performed in the 100% 4k write test, our mixed workload profiles scale the performance across a wide range of thread/queue combinations. In these tests, we span workload intensity from 2 threads and 2 queue up to 16 threads and 16 queue. The Seagate 6TB was the fastest drive tested in the expanded 8k 70/30 test. The Seagate Constellation 3TB showed a very poor performance, although the Seagate Constellation 4TB was competitive. 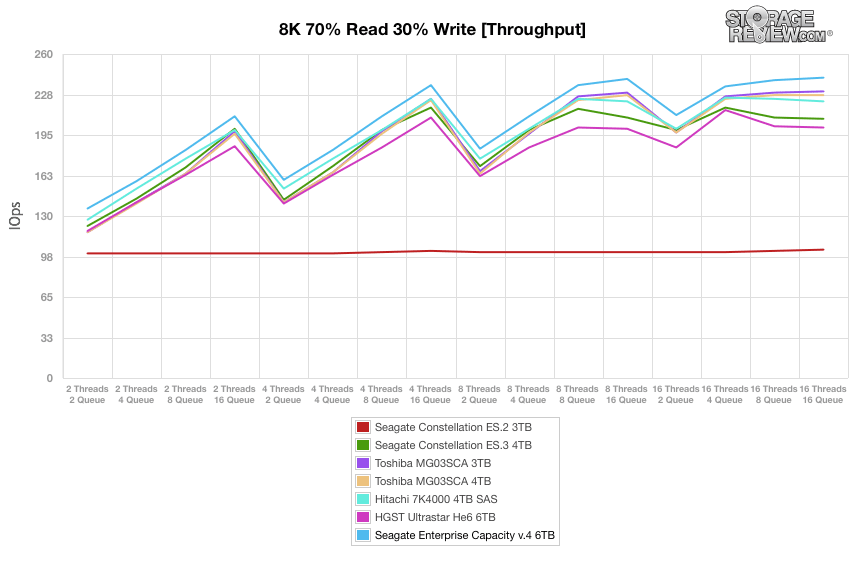 Once again, the Seagate 6TB was the fastest drive tested through the duration of the benchmark. The other drives were in the same range for the most part, with the exception of the Seagate Constellation 3TB. 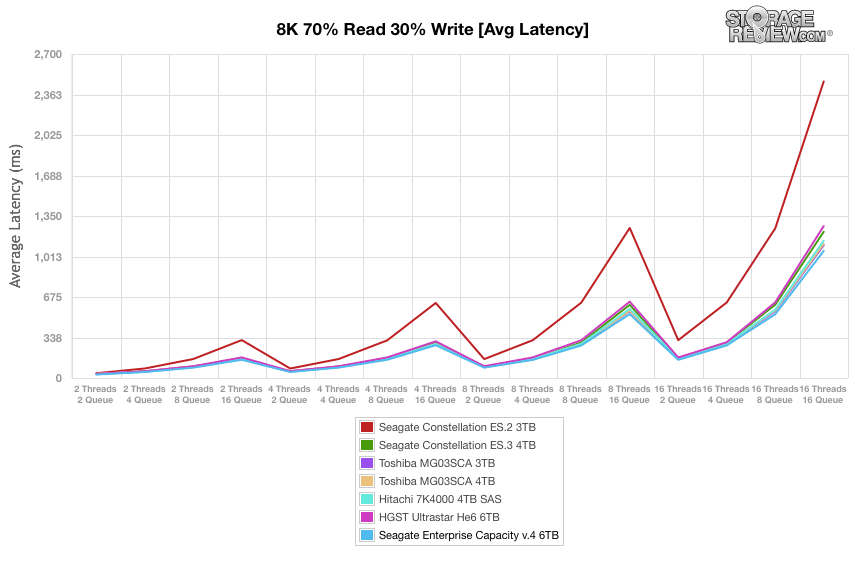 In the max latency benchmark most of the drives should very inconsistent performances. The Seagate 6TB remained in the middle of the pack for the most part, and the Seagate Constellation 3TB had the fastest performance through most of the test. 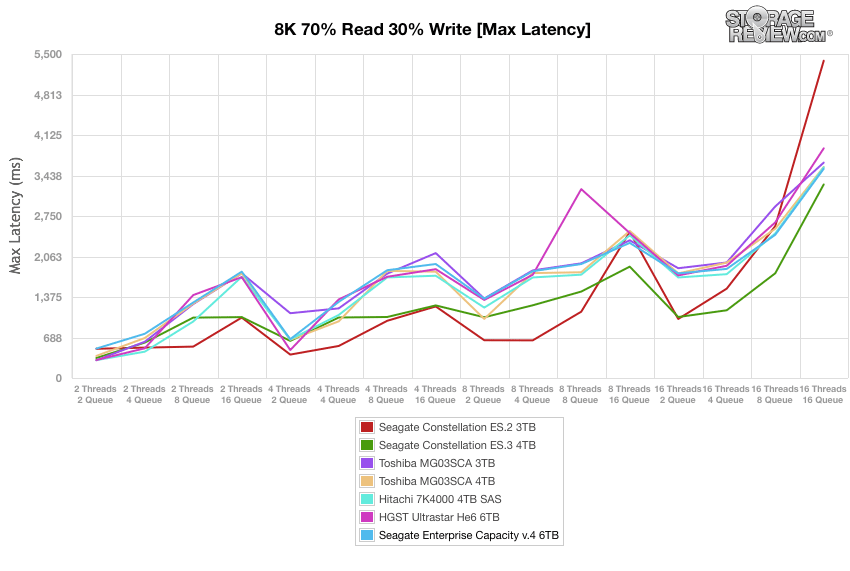 The Seagate Constellation 3TB showed the most consistency in the standard deviation analysis, maintaining a handed lead through most of the test (at the very end it was surpassed by most of the drives). The Seagate 6TB was in the middle of the pack through the duration of the benchmark. 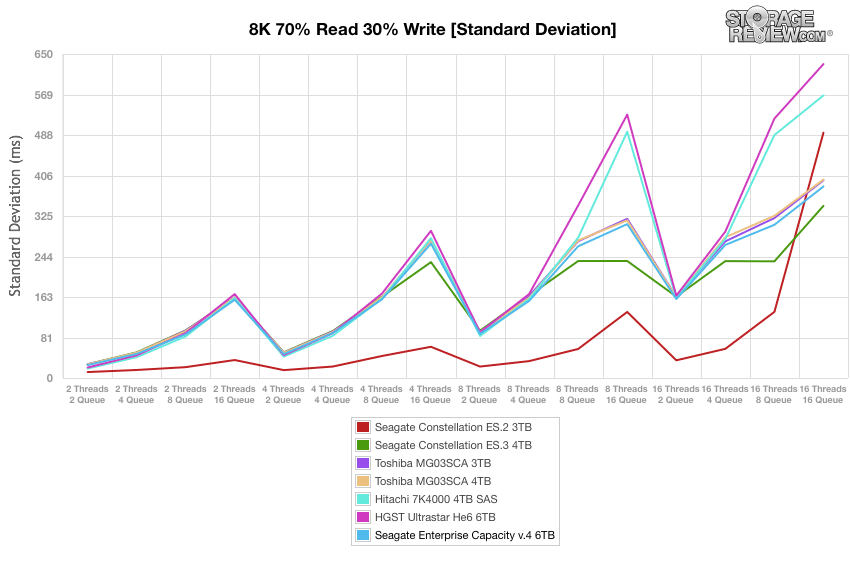 Our Enterprise Synthetic Workload 128K test is a large block sequential test that shows the highest sequential transfer speed for a platter drive. Looking at 128K performance of 100% write and 100% read activity, the Seagate 6TB outclassed all of the other drives in both read and write functions; the closest competitor was the HGST Ultrastar He6, which was almost 40,000IOPS lower than the Seagate 6TB in read and write.

The Seagate SAS 6TB drive is a 7200RPM 3.5" HDD that can provide very competitive performance numbers while offering improved density of 50% over prior-generation 4TB hard drives. This particular review centers on the 12Gb/s SAS interface, but the drives are also available with 6Gb/s SAS interface and 6Gb/s SATA interface. The SAS drives also come in smaller 2TB and 4TB options. All drives include a five year warranty and can be configured with encryption.

Through the performance benchmarks we saw great numbers by the Seagate 6TB, reinforcing their "fastest 6TB nearline" claim. It was in the top three for most tests in terms of speed for most of the 4K random tests. It had the best performance in our 8K 70/30 test in terms of throughput and average latency, as well as in the 128K throughput benchmark. In application benchmarks it also performed quite favorably, boasting top numbers in both our SQL Server and MySQL tests. In our Sysbench test one area of note is that under lower loads, the SATA version was able to outperform it, although under full load the SAS model had the edge in performance.

The Seagate Enterprise Capacity SAS 6TB HDD combines great performance with a design the industry is comfortable with making the drive an easy choice for environments that need big capacity to support growing data sets.