The new portable wireless storage category is growing rapidly, with companies trying to anticipate consumer demand to craft the perfect solution. Seagate is differentiating their GoFlex Satellite from the competition in a number of ways. The Satellite combines 500GB of storage with a five hour battery and apps for both Apple iOS devices and the slew of Android offerings as well. The drive ships with a USB 3.0 adaptor for rapid file transfers to the drive, but thanks to the GoFlex system, users can swap that our for eSATA or FireWire for tremendous interface flexibility.

The new portable wireless storage category is growing rapidly, with companies trying to anticipate consumer demand to craft the perfect solution. Seagate is differentiating their GoFlex Satellite from the competition in a number of ways. The Satellite combines 500GB of storage with a five hour battery and apps for both Apple iOS devices and the slew of Android offerings as well. The drive ships with a USB 3.0 adaptor for rapid file transfers to the drive, but thanks to the GoFlex system, users can swap that our for eSATA or FireWire for tremendous interface flexibility.

Seagate’s offering is quite a bit different than the Kingston Wi-Drive, which leverages 16GB or 32GB of flash memory to deliver what is essentially a temporary storage situation. While Kingston’s pocketable drive is meant to be filled and refilled with regularity, Seagate is banking that consumers and small businesses would prefer more capacity and accessibility options. Seagate aligns more directly with the Hitachi G-Connect drive which is also 500GB, but only offers USB 2.0 and does not have a battery. The Hitachi drive does however does offer Internet connection sharing with an Enternet port on the back of the unit. 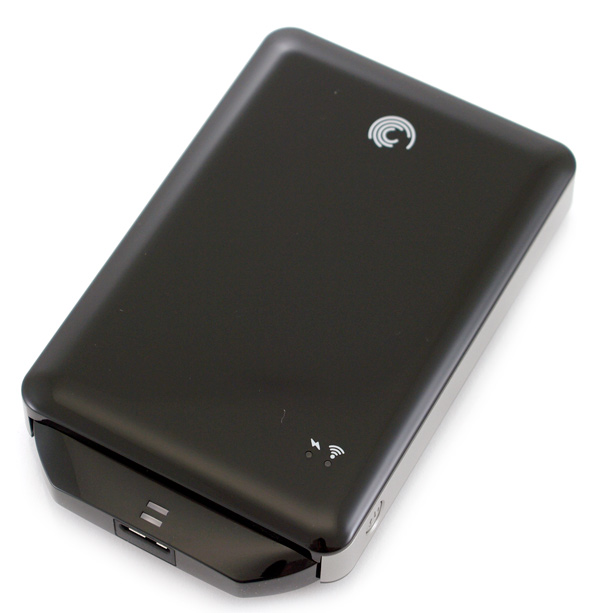 The Seagate GoFlex Satellite is based off a 2.5-inch external hard drive design which provides its high 500GB capacity but also increases its size compared to the flash-based Kingston Wi-Drive. The footprint is about 30% larger than the Apple iPhone 4 and just under twice as thick. At first glance the larger size might appear to be a negative to some, but on the flip side it has an order of magnitude more storage capacity and since it is wireless, can still be stuck in a backpack and forgotten. 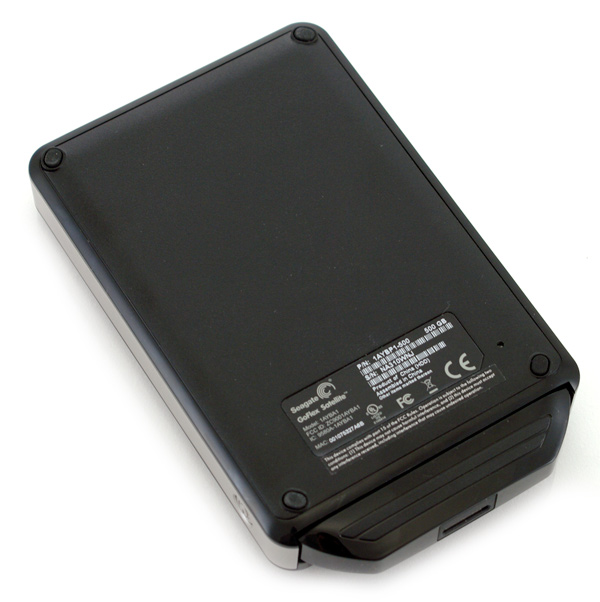 The color scheme is glossy black with a silver-trimmed border. The design also features two status indicator lights, one for power and another for wireless activity. For charging the drive on the go or at home, the GoFlex is very versatile. Users can charge it through a standard DC-input plug on the side of the case as well as through the GoFlex USB 3.0 interface. The first option works very well, since you can pop off the USB 3.0 interface in favor of a blank that fits in flush with the side of the case and still charge the unit while traveling.

To charge the drive on the go, Seagate includes two solutions to charge the Satellite. The first is a compact AC-adapter which is not much larger than the plug itself. This works well for charging the drive at home or in the office and doesn’t add much bulk to your bag. The other included option is a small profile car-charger, which makes sure even on longer road trips you can keep the drive topped off and streaming out media. These methods combined with charging through a USB port on your computer should cover almost any scenario to keep the battery fully-charged. 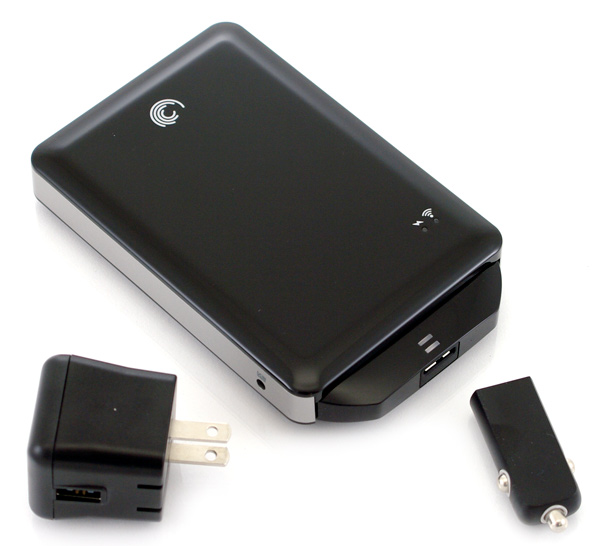 Since the Seagate GoFlex Satellite is based off an external hard drive design with Wi-Fi capabilities added to it, it has a huge advantage when it comes to high-performance native transfer speeds. The Satellite is based around the versatile GoFlex platform, which supports eSATA, USB 3.0, and FireWire through separate adapters. Included with the drive is the USB 3.0 adapter, giving backward compatibility with USB 2.0 and high speeds with USB 3.0. 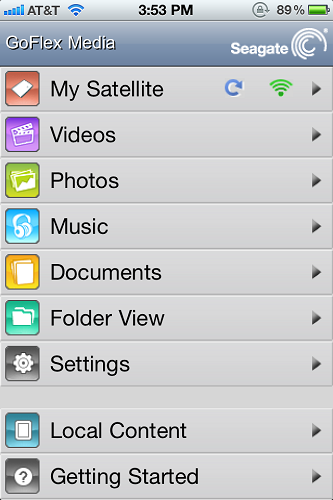 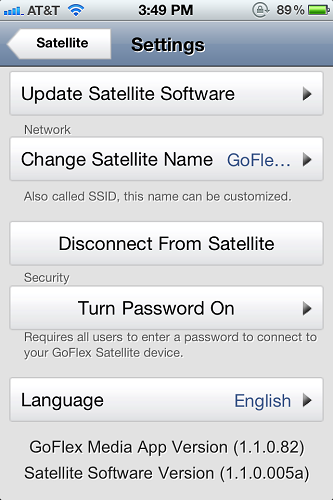 In our tests we found the GoFlex Satellite to measure 81.45MB/s read and 79.96MB/s write over USB 3.0, which is plenty fast to move around media quickly before a trip. To put this in perspective, users can transfer 200GB of music and video in under one hour. Compared to the Wi-Drive which was had almost one-tenth of the write speed, you can get more media loaded on in much less time. Transferring our 30GB iTunes media folder took seven and a half minutes with the GoFlex Satellite and just under an hour with the Wi-Drive. 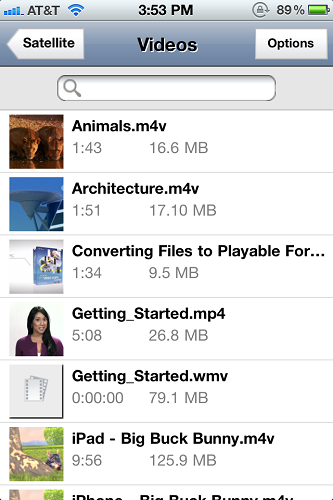 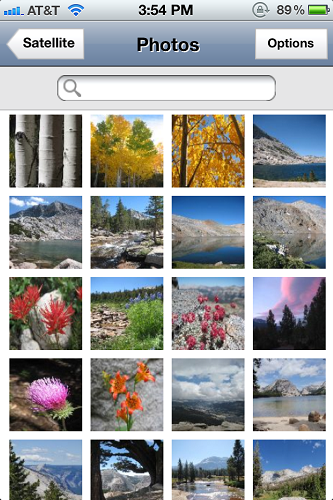 Interfacing with the Seagate GoFlex Satellite from a mobile device requires the download of a GoFlex Media app, which is currently available for both Android and iOS. Once connected with the Wi-Fi access point created by the Satellite, the app recognizes the hotspot server and lets you browse all of the available media. Similar to the Wi-Drive software, it is split up into categories. Seagate includes folders for videos, photos, music, and documents, as well as a settings area to configure the device from your phone. As with the Kingston Wi-Drive, the GoFlex Satellite also has an on-board webserver for notebooks to interface with over Wi-Fi. And also just like the Kingston, smartphones and tablets with a radio for the cell networks won’t be able to get email or get online while connected to the WiFi provided by the Satellite. This is of course a limitation of those devices and something that should be resolved at some point by Google and Apple.

The Seagate GoFlex Satellite has a lot to offer with its high capacity, fast transfer speeds, and trusted in-house Seagate hard drive inside. Compared to the Kingston Wi-Drive, it has more than 14 times the usable storage capacity and 10 times the write speed thanks to its platter-based design versus flash. The flip side to this setup is the larger footprint and increased weight. Only the buyer can really decide what works best for them, but the way we see it you would be hard pressed to notice the weight difference with both hidden away in a backpack.

Compared to Kingston, Seagate has more software compatibility out of the gate, already supporting Android devices through a native app. Right now Kingston only offers iOS support, although they have mentioned they have plans to release an Android app in the future for the Wi-Drive. Both devices offer similar capabilities when it comes to streaming media with Seagate having a huge lead on storage capacity with a 500GB hard drive inside compared to 16 or 32GB of the flash-based Wi-Drive. Against the Hitachi G-Connect, the Satellite offers an included battery, but does give up the Internet sharing via Ethernet port that Hitachi offers.

The Seagate GoFlex Satellite offers a massive 500GB of storage capacity to stream even the largest of media collection on the road or in the air traveling, without needing to be tethered to a power outlet.