Data requirements continue to explode and there’s no sign of it slowing down, and as such, companies that need always on, always accessible 24×7 performance continue to look for cost-effective and scalable solutions in hard disk drives, particularly smaller businesses. Seagate looks to address these issues with the most recent model of their SMB/SME enterprise line of HDDs, the IronWolf Pro 14TB, designed as a scalable solution for any NAS environment. This massive capacity gives organizations a viable option to better manage their storage server budgets. We’ve also reviewed the IronWolf 14TB non-Pro version.

Data requirements continue to explode and there’s no sign of it slowing down, and as such, companies that need always on, always accessible 24×7 performance continue to look for cost-effective and scalable solutions in hard disk drives, particularly smaller businesses. Seagate looks to address these issues with the most recent model of their SMB/SME enterprise line of HDDs, the IronWolf Pro 14TB, designed as a scalable solution for any NAS environment. This massive capacity gives organizations a viable option to better manage their storage server budgets. We’ve also reviewed the IronWolf 14TB non-Pro version. 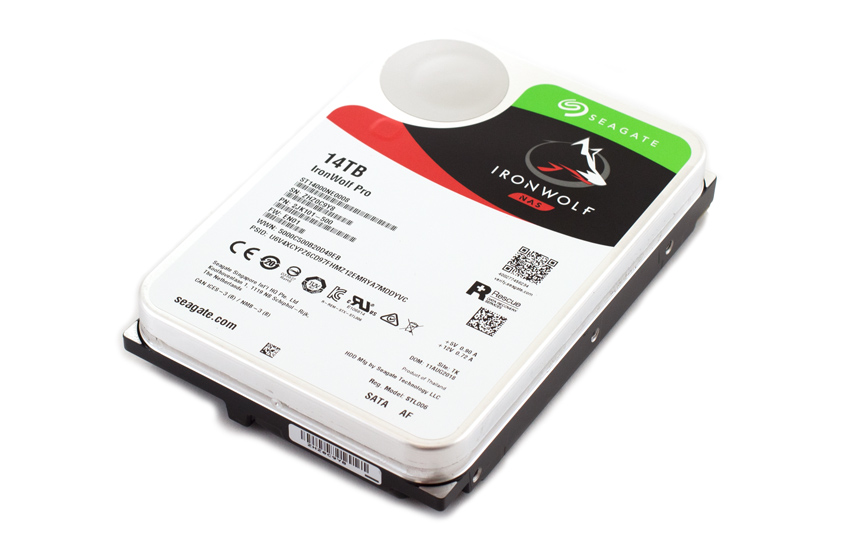 The new 14TB model is the market’s largest to date, and is designed to meet the demand of high workload environments such as Cloud-based and NAS storage, backup and disaster recovery, multi-media server and storage and file and print server sharing. Seagate also quotes a sustained transfer rate of 250MB/s. 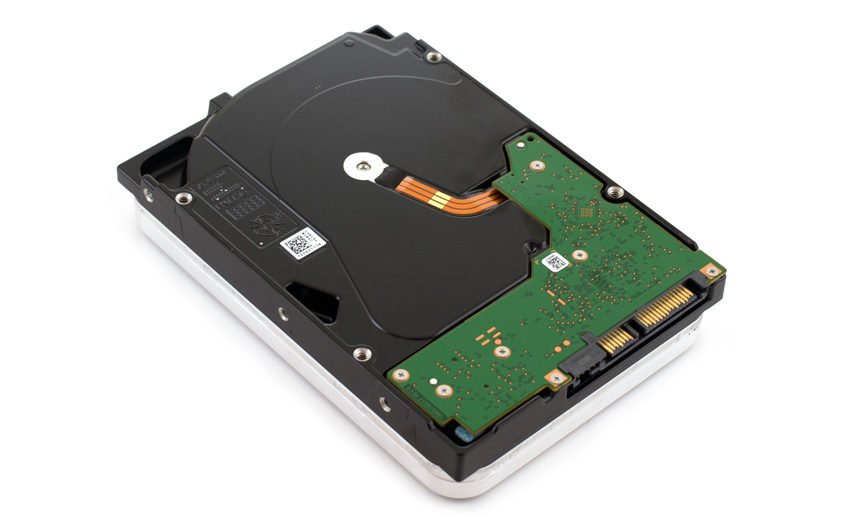 Along with its 1.2M hours MTBF and 5-year limited warranty, the new IronWolf 14TB comes with 2 years of Seagate Rescue, the company’s data recovery service. Touting a 95% success rate, this rescue plan offers protection from unexpected data loss due to accidents or mechanical damage, giving users access to a global team of world-class data recovery claiming in 15 days or less.

In the following section of this review, we will show the 14TB Seagate IronWol Pro’s performance in both iSCSI and CIFS configurations compared to the 12TB and 12TB Pro models as well as the 14TB non-Pro model. Seagate supplied StorageReview with 8 samples of their new NAS HDDs, which we configured in RAID6. All the drives were tested in our NETGEAR ReadyNas 628X.

In 4k average latency, the IronWolf Pro 14TB hit 379.36ms read and 207.70ms write in iSCSI connectivity, demonstrating a significant improvement over the 12TB versions in write performance. Looking at CIFS shows a slight lead in read with 773.58ms, while writes again showed a noticeable improvement with 231.46ms.

With standard deviation, the IronWolf Pro 14TB was the top performer in reads with 351.5ms, though writes hit a leading 488.5ms in iSCSI. The 14TB Pro in CIFS read measured 689.4ms and write measured 414.7ms.

The next benchmark tests the drives under 100% read/write activity, but this time at 8k sequential throughput. The Seagate IronWolf Pro 14TB Pro was significantly outperformed by the non-Pro model in iSCSI reads with 118,522 IOPS. It posted a much closer 50,652 IOPS write.

Our next test shifts focus from a pure 8k sequential 100% read/write scenario to a mixed 8k 70/30 workload, where we will show how performance scales in a setting from 2T/2Q up to 16T/16Q. The IronWolf 14TB drive showed similar performance in iSCSI throughout the test, though it fell off at the very end with 626 IOPS in the terminal queue depths of iSCSI. 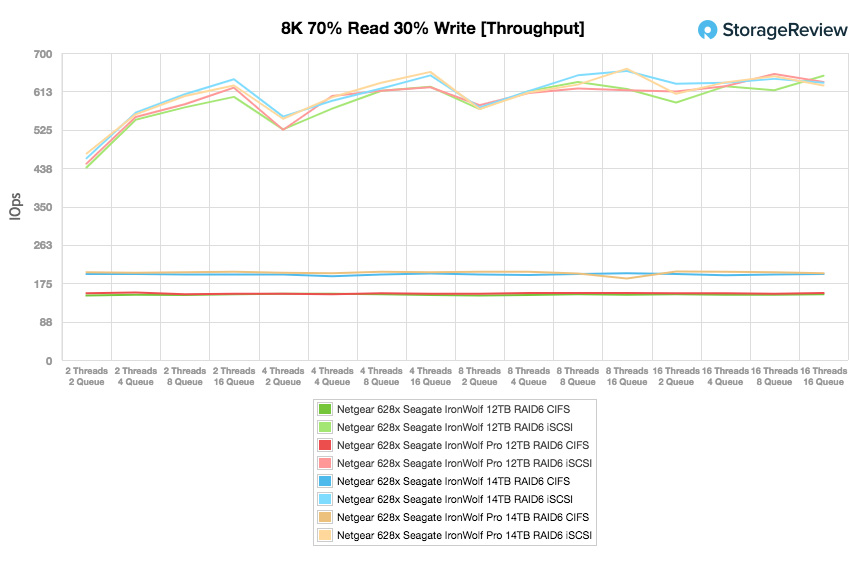 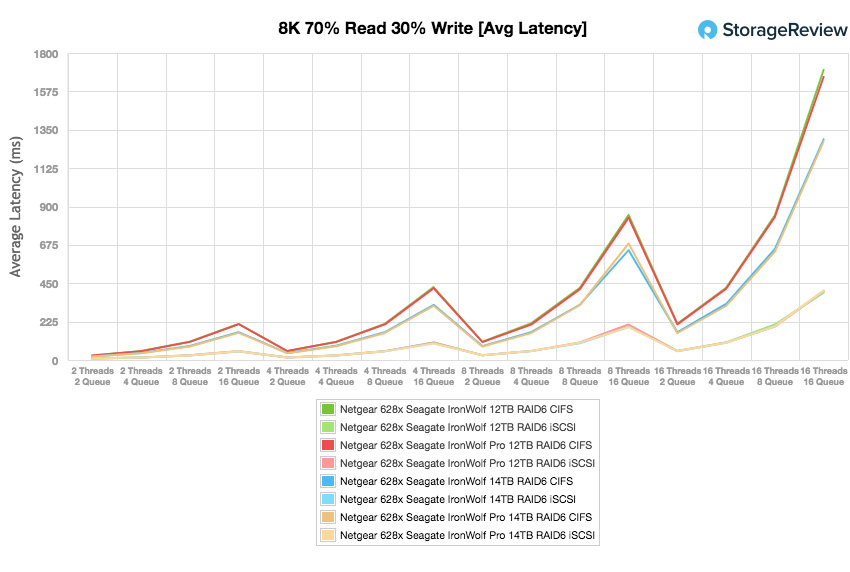 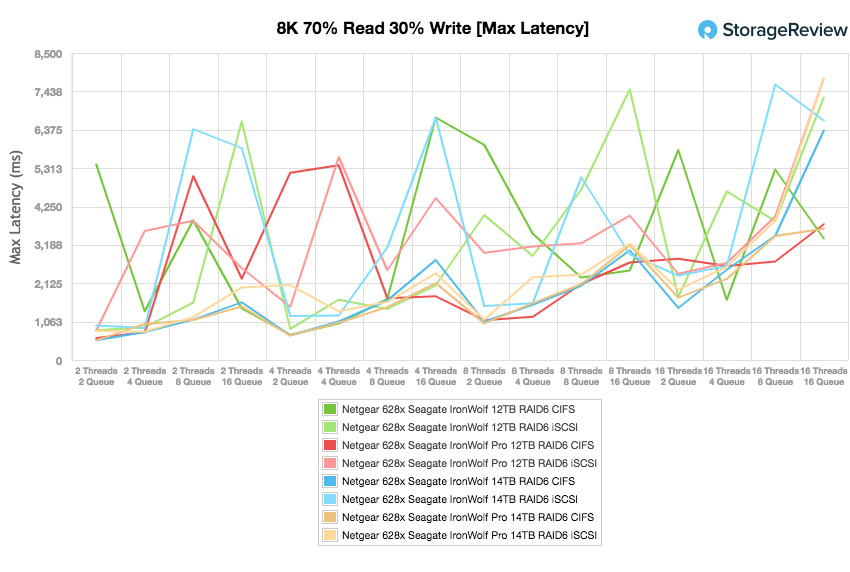 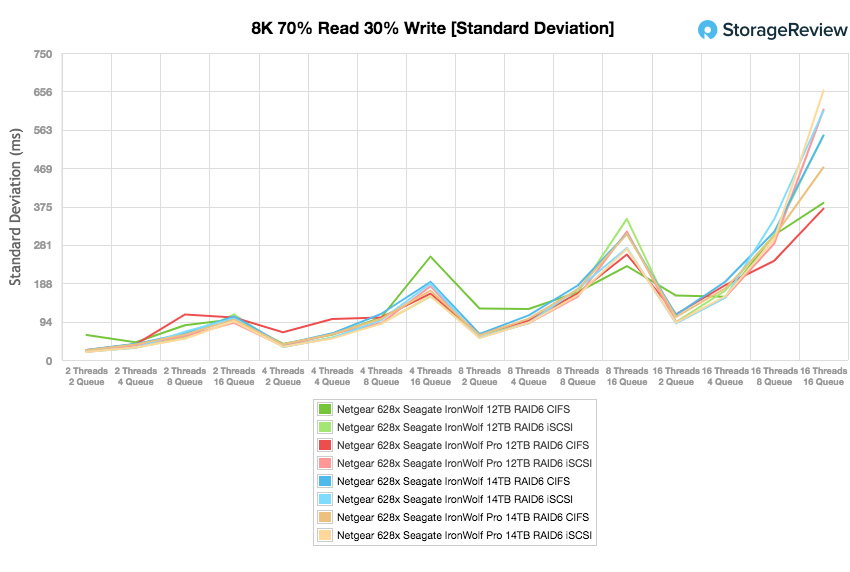 Our last test is the 128k benchmark, which is a large-block sequential test that shows the highest sequential transfer speed. Here, the Seagate IronWolf Pro 14TB fell behind the lower capacity model in CIFS read performance, posting 2GB/s vs. the 12TB’s 2.31GB/s. In write, the 14TB model showed a leading 1.3GB/s. In iSCSI, the 14TB IronWolf Pro hit 1.8GB/s read and 1.08GB/s write, again lagging behind the older, smaller model.

Overall, the new 14TB Seagate IronWolf Pro model is a solid option for growing small businesses that rely on NAS devices to store and manage their data. Seagate’s new massive capacity point also allows organizations to accomplish this in a very cost-effective manner, including minimizing the need for drive replacements and promoting a smaller footprint in the office. Additionally, the 14TB Pro is bundled with AgileArray technology to promote availability, reliability, and RAID and power usage optimization. As was the case for the 12TB version, the IronWolf 14TB Pro offers a few benefits over the non-Pro model, including an extended warranty (3-year vs. the Pro’s 5-year), support for additional drive bays, better mean times between failures and more optimization functionality for multi-users.

To gauge its performance, we tested 8 IronWolf Pro 14TB drives in a NETGEAR 628x NAS, which is the same configuration as the previous 12TB model review. Though the 14TB IronWolf setup was at the top of the charts in several categories, the non-Pro versions (as well as the lower capacity models) came out on top in some of the tests. In our 4k benchmarks the 14TB Pro was able to hit iSCSI throughputs of 674 IOPS read and 1,245 IOPS write (a 3.5% and 64% increase, respectively, over the 12TB model) and an average latency of 379.36ms read and 207.70ms write (an improvement of 3.4% and 67%, respectively over the 12TB model). In our 8k 100% Read/Write test, the 14TB Pro model was outperformed by the non-Pro model by a large margin in iSCSI reads, posting 118,522 IOPS vs the non-Pro’s leading 173,277 IOPS. However, it posted a much closer 50,652 IOPS write. Lastly in our 128k large block sequential benchmark, the 14TB Pro model lagged behind the lower capacity Pro model in CIFS read performance with 2GB/s vs. the 12TB’s 2.31GB/s. In write, however, the 14TB model showed a leading 1.3GB/s. In iSCSI, it hit 1.8GB/s read and 1.08GB/s write.

The Seagate IronWolf Pro NAS HDDs gives SMBs the performance they need our of a hard drives while allowing them to pack more density in the same footprint.