The Seagate 2-bay NAS, along with the recently reviewed 4-bay configuration, is part of Seagate's latest NAS line release. The Seagate NAS line is aimed at small or home offices without dedicated IT resources. It includes a Marvell 1.2GHz processor, 512MB of DDR3 RAM, and ships with Seagate NAS HDDs for a maximum capacity of 10TB (users can choose to receive their NAS drive-less or equipped with two 2TB, 3TB, 4TB, or 5TB drives). All hardware, software, and drives are made by Seagate allowing all parts of the NAS to work together seamlessly. Unlike its larger sibling, the 2-bay NAS only has a few RAID options (RAID0 and RAID1, with a JBOD option) but comes preconfigured to save setup time but users can change the configuration through SimpleRAID technology built into the OS.

The Seagate 2-bay NAS, along with the recently reviewed 4-bay configuration, is part of Seagate's latest NAS line release. The Seagate NAS line is aimed at small or home offices without dedicated IT resources. It includes a Marvell 1.2GHz processor, 512MB of DDR3 RAM, and ships with Seagate NAS HDDs for a maximum capacity of 10TB (users can choose to receive their NAS drive-less or equipped with two 2TB, 3TB, 4TB, or 5TB drives). All hardware, software, and drives are made by Seagate allowing all parts of the NAS to work together seamlessly. Unlike its larger sibling, the 2-bay NAS only has a few RAID options (RAID0 and RAID1, with a JBOD option) but comes preconfigured to save setup time but users can change the configuration through SimpleRAID technology built into the OS. 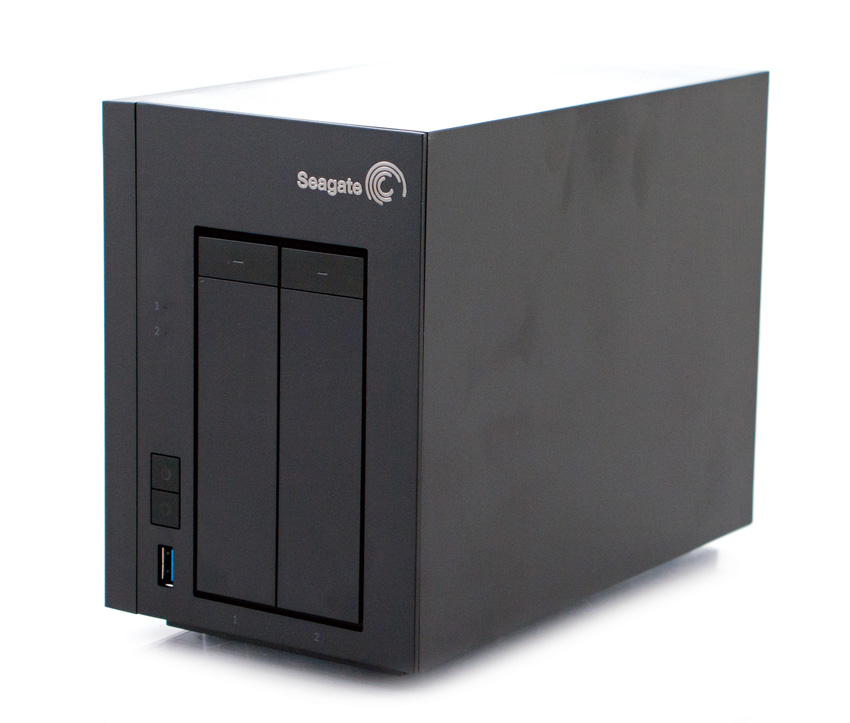 NAS OS 4 has a redesigned Device Manager to allow effortless management of data. Its App Manager and Sdrive allow for remote access on Android and iOS devices, so the user’s data is always available and can be accessed wherever there is Internet connection. The device creates a private cloud that physically resides on Seagate NAS, keeping files centrally located while allowing access for outside parties like clients and family. It can also be easily integrated with other cloud services such as Amazon S3 and Box. NAS OS 4 is thanks in large part to LaCie design team (that has now fully integrated with Seagate). The new operating system is an easy-to-use and intuitive OS. It is a web-based interface that simplifies setup and management and is designed specifically for the Seagate NAS line.

The Seagate 2-bay NAS is quite small with sturdy black molded plastic making up its chassis. The users can access the two drives at the front of the device through the two hot-swappable bays. There is Seagate branding on the top right hand side. On the left hand side starting from top to bottom are two LED lights corresponding to drive status, a power button, a backup button, and a USB 3.0 port. 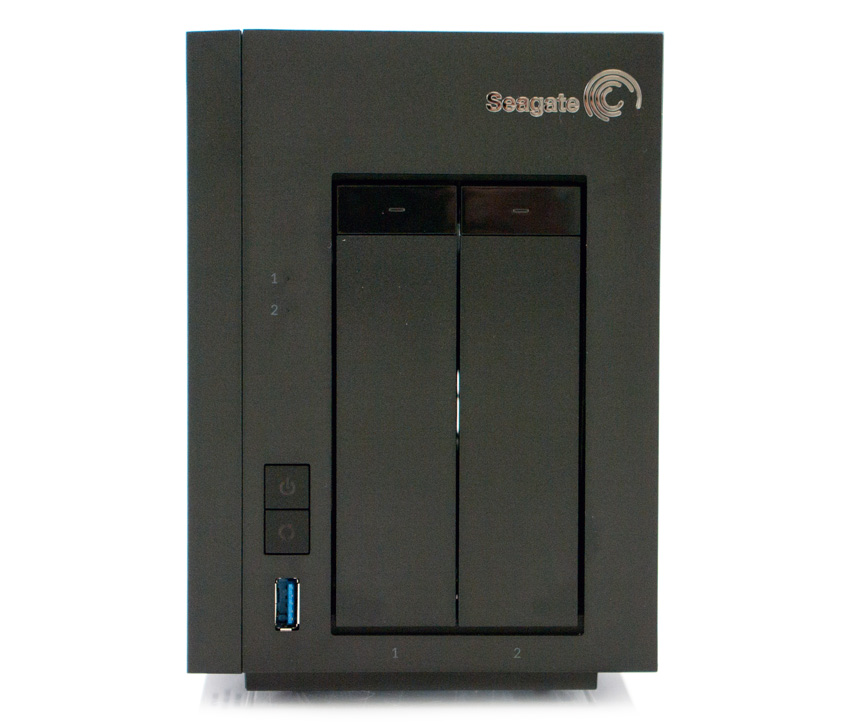 The back of the device is composed mostly of the fan. To the right of the fan is a reset button, USB 3.0 port, a network port, and the AC power adaptor interface. The device can also be secured via its Kensington Lock port on the bottom left hand corner. 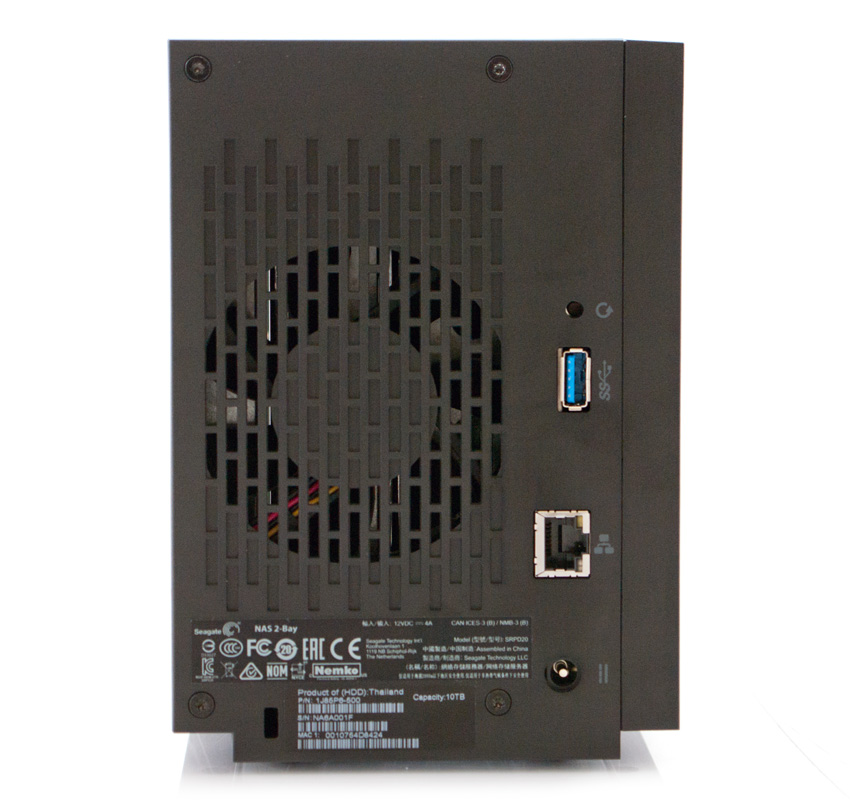 Drive trays for the Seagate NAS are toolless, using a unique side bending mechanism to snap the drives into place. The trays are very well engineered, when swapping drives, having such an easy clip and go design is great. Most other toolless designs still require extra pieces that snap into place.

The Seagate NAS comes preconfigured with the desired capacity making setup simple for most, though a bare version is available. Connect an Ethernet cable, a power adapter, and press the power button and you are ready to go. Once you’re logged in, you’ll find a redesigned home screen with icons for Device Manager, File Browser, Download Manager, Backup Manager, and App Manager. The home screen also gives you the option to switch between NAS, restart, or put the device to sleep. 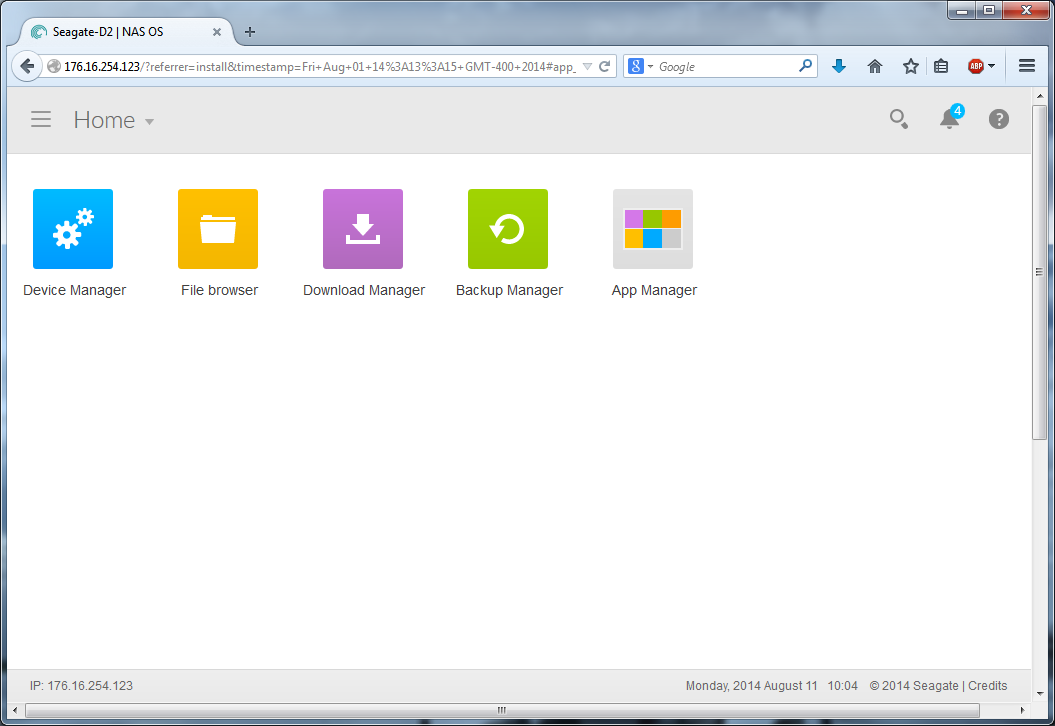 The Device Manager provides overall NAS status and health, informing the user on the device's number of shares, users, group, CPU and RAM usage, and allowing access to settings. 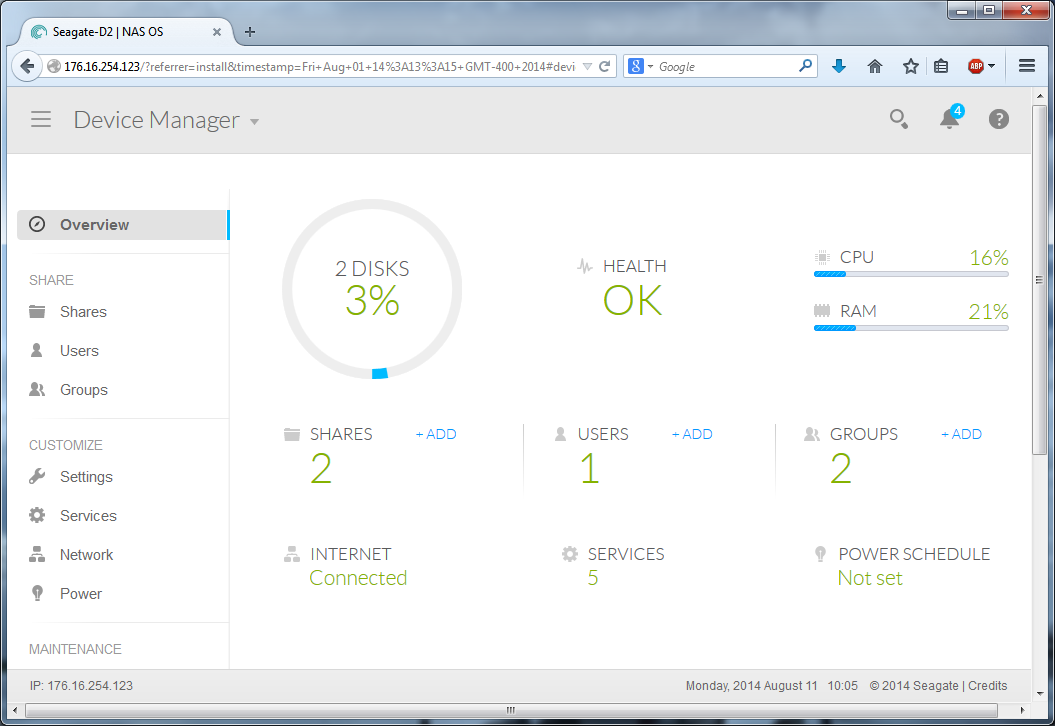 Through the Storage Overview tab, specific volumes can be managed. This tab gives you detailed capacity information, available space, and used space. It also shows drive status and RAID configuration. 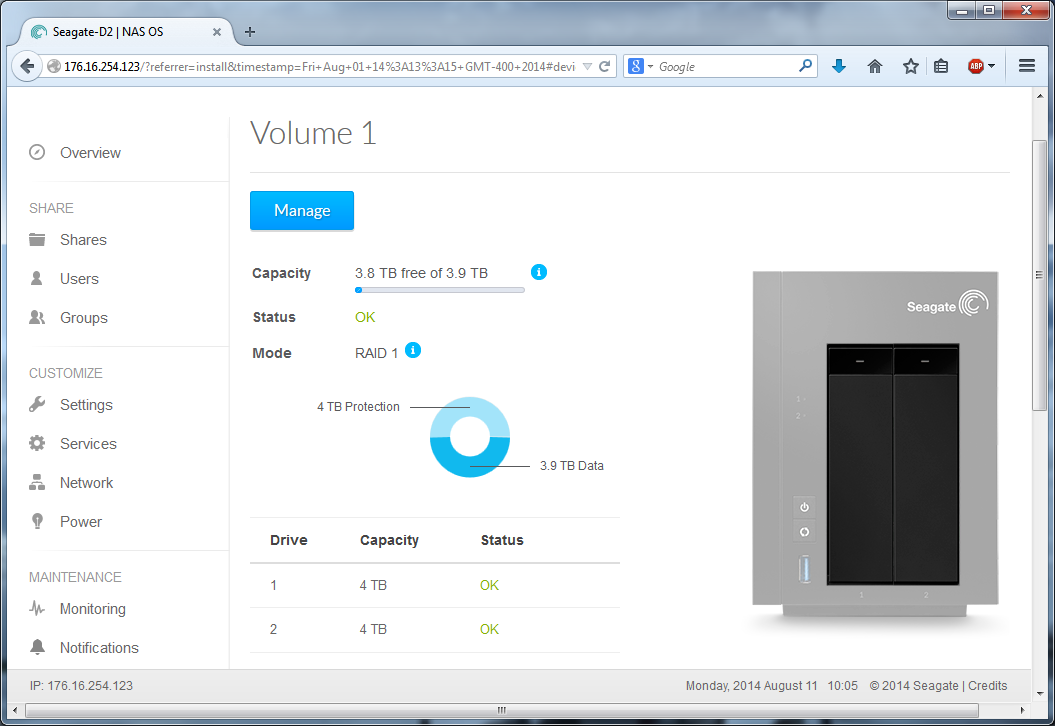 Through the Network tab, you can check network connections, IP addresses, status, and speed. 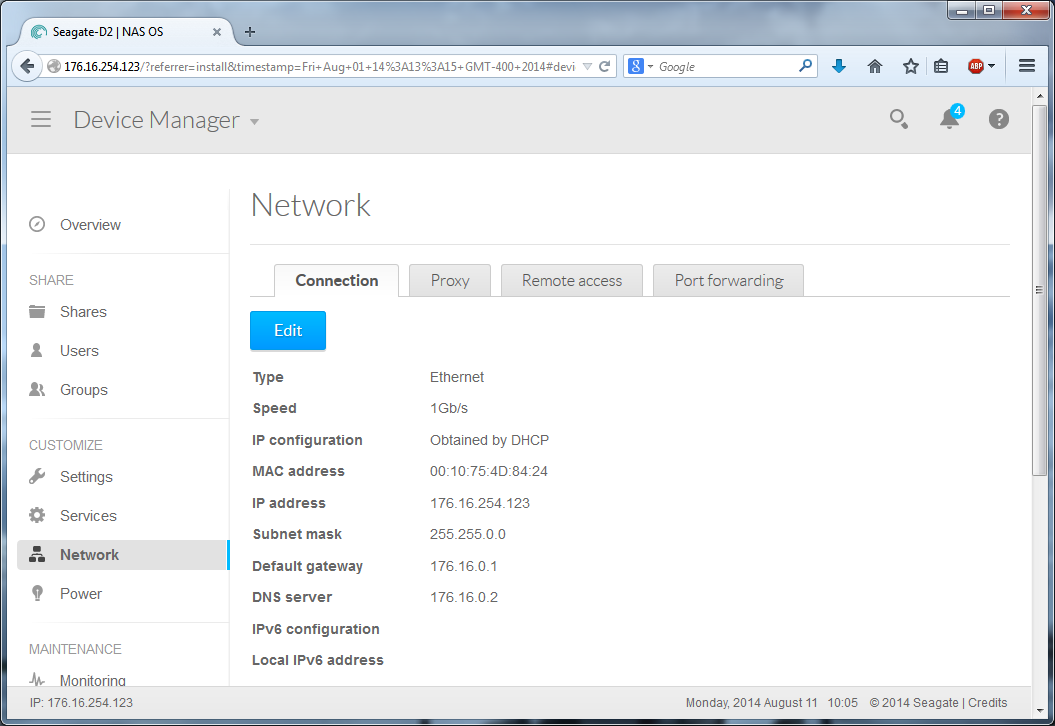 Overall the web interface is very simple and easy to use without advanced NAS experience. Users can manage their system without getting overwhelmed with minute administrative options. The NAS OS 4 has a few other features: through the Device Manager you can use the Services tab to make the device compatible with your devices on your network. Through Backup Manager, you can schedule various backups, restore from an existing backup, and do a network backup to another NAS OS device or cloud backup. App Manager allows you to download Seagate and third party apps. With File Browser you can view, upload, and download your various files. And Download Manager allows for easy downloads directly to your NAS.

In order to fairly evaluate the performance of the Seagate NAS we need an environment that ensures that the NAS is the I/O bottleneck rather than the network. Therefore this review employs a Lenovo ThinkServer RD240 running multiple Windows Server 2012 VMs in an ESXi 5.1 environment connected via a quad-port Intel i350-T4 NIC through a Netgear ProSafe GS752TXS switch.

Our shared storage benchmark process preconditions each NAS into steady-state with the same workload the device will be tested with under a heavy load of 16 threads with an outstanding queue of 16 per thread, and then tested in set intervals in multiple thread/queue depth profiles to show performance under light and heavy usage. Since HDD-based shared storage reaches its rated performance level very quickly, we only graph out the main sections of each test.

The WD MyCloud EX2 in iSCSI dominated our standard deviation benchmark, achieving the most consistent results in both read and write (93.14ms and 609.48ms, respectively). The Seagate 2-bay NAS configured in iSCSI performed reasonably consistently in write functions (975ms), and its CIFS  configuration did well in read functions (230ms), but it had the least consistent write performance with 1903ms (which was well above all of the other drives and configurations). The Synology DS214se configured in iSCSI had the least consistent read performance (486ms).

Our next benchmark measures 8k sequential throughput with a 16T/16Q load in 70% read and 30% write operations. The Synology DS214se configured in iSCSI dominated the majority of this benchmark. The Seagate 2-bay NAS configured in iSCSI held second place through the test, but its CIFS configuration was the slowest through the duration (although the CIFS configuration of the Synology DS214se performed relatively poorly as well). 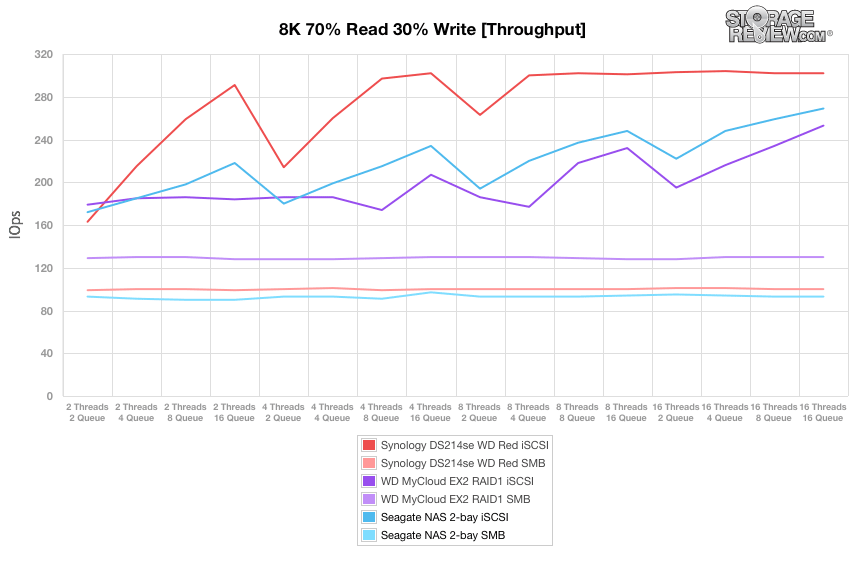 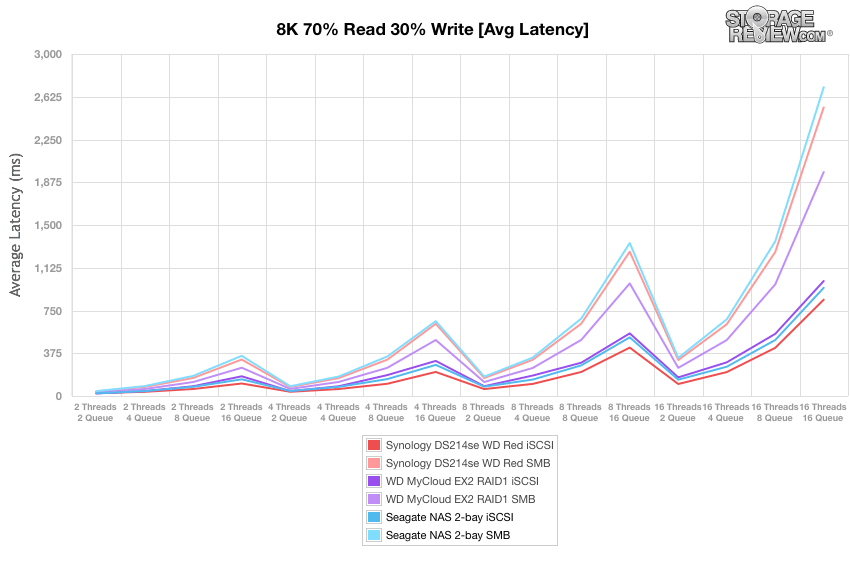 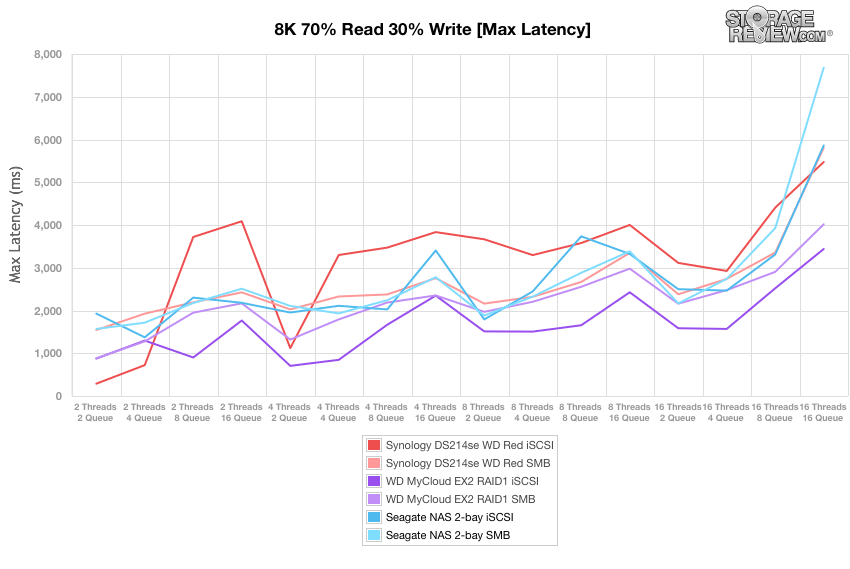 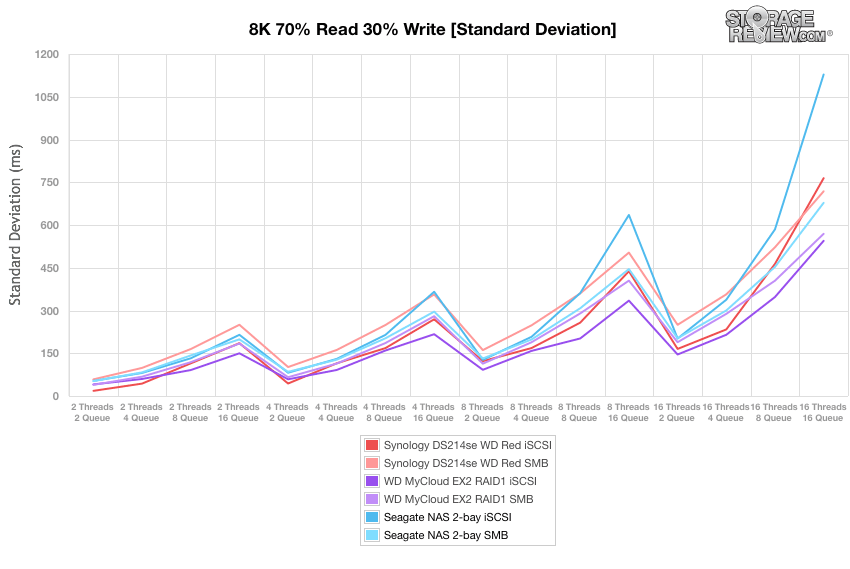 The last test in our small NAS Synthetic Workload testing is the 128k test, which is a large block sequential test that shows the highest sequential transfer speed. The Seagate 2-bay did not perform well in terms 128k performance, especially in read functions, which only reaching 39MB/s and 13MB/s in iSCSI and CIFS, respectively. Its write speeds were closer to average, but still weren't great compared to the other devices tested (63MB/s and 69MB/s in iSCSI and CIFS, respectively). The Synology DS214se and WD MyCloud EX2 (CIFS configurations) were the top performers in read functions, achieving 114MB/s and 112MB/s, respectively.

The Seagate NAS line is a 2-bay desktop form factor NAS aimed at home users and SOHO with no IT infrastructure. It comes equipped with a Marvell 1.2GHz processor, 512 MB DDR3 ram, and can run up to 10TB in raw capacity. The device runs the new operating system NAS OS 4, which is designed for simplification and ease-of-use. The Seagate NAS ships with the Seagate NAS HDDs, meaning everything–from the software, hardware, and drives–are all made by Seagate and designed to work together well. It's always a welcomed feature to have in-house components for storage devices like these, as it usually means greater longevity and reliability, or at a minimum, one phone number to call for support.

As far as performance goes, we measured both CIFS/SMB and iSCSI configurations in the Seagate NAS and compared it to two other SOHO NAS units in a similar price category. Though it performed fairly well in our 4K tests in the iSCSI protocol, overall it wasn't a strong performer compared to the other units. However the Seagate NAS line is designed to be simple to use right out of the box for those with little IT experience, and that's exactly what it delivers. On that score the Seagate NAS does well, it's incredibly simple to use and has a very clean and intuitive UI; all with a competitive price point to boot.

The Seagate 2-bay NAS is a good option for home users or small office situations that need a simple NAS that is ready to use right out of the box.