Seagate's new NAS 8TB HDD expands their NAS line of drives that is intended to more efficiently serve multi-drive use cases while maintaining the performance and price-point desired by SOHO users. The Seagate NAS HDD utilizes NASWorks firmware, which specifically hones drives for server functionality. In addition to enhancing host compatibility, NASWorks reduces HDD power consumption, which also reduces heat production. NAS environments, in which multiple drives may be operating simultaneously, greatly benefit from the energy efficiency of duty-specific drives. Seagate also constructed this line of HDDs with dual-plane balanced motors, which work to control the vibrations that disk drives produce. Reduced heat production paired with vibration control maximize drive performance and improve server reliability, which helps to maintain the 24/7 operability that is essential for remote access and virtualization.

Seagate's new NAS 8TB HDD expands their NAS line of drives that is intended to more efficiently serve multi-drive use cases while maintaining the performance and price-point desired by SOHO users. The Seagate NAS HDD utilizes NASWorks firmware, which specifically hones drives for server functionality. In addition to enhancing host compatibility, NASWorks reduces HDD power consumption, which also reduces heat production. NAS environments, in which multiple drives may be operating simultaneously, greatly benefit from the energy efficiency of duty-specific drives. Seagate also constructed this line of HDDs with dual-plane balanced motors, which work to control the vibrations that disk drives produce. Reduced heat production paired with vibration control maximize drive performance and improve server reliability, which helps to maintain the 24/7 operability that is essential for remote access and virtualization. 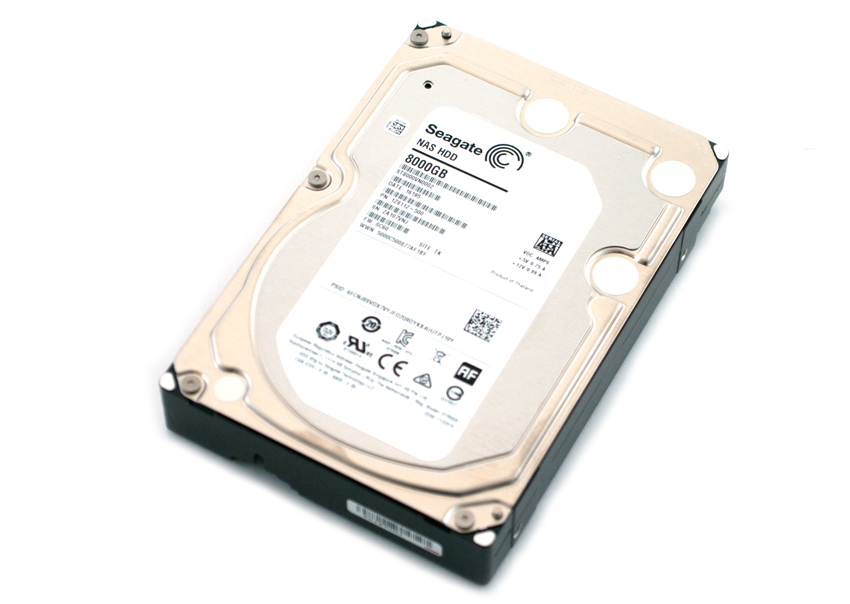 Seagate sought to make this line of drives more appealing to SOHO users who might not have an IT background (or businesses that are not large enough for an IT staff) by streamlining the configuration of the drives depending on the specific application. In the event of drive malfunction, NASWorks error recovery controls help correct disk errors quickly without requiring much user intervention. However, while NASWorks saves users from having to deal with most of the technical aspects of setting up and using the drives, Seagate also offers the +Rescue Service Plan as a premium feature to help with larger-scale data recovery. If users pay to enroll in Seagate's +Rescue enhanced recovery plan, Seagate will attempt to recover data from drives if they are damaged, even if the damage is from user-error. For each drive enrolled in the service plan, Seagate will attempt to recover data one time over the 3-year warranty period. Although they don't guarantee a successful extraction, Seagate reports a 90% success rate. If data is successfully extracted, Seagate sends it back to the user loaded onto a new NAS HDD.

Our Enterprise Synthetic Workload Analysis includes four profiles based on real-world tasks. These profiles have been developed to make it easier to compare to our past benchmarks as well as widely-published values such as max 4k read and write speed and 8k 70/30.

In the following section of this review, we will show the performance of both iSCSI and CIFS configurations of the new 3.5" Seagate NAS 8TB HDDs. Seagate supplied StorageReview with 8 samples of their new HDDs, which we configured in RAID10 in a Synology DiskStation DS1815+.

The standings of the average latency benchmark (CIFS) are consistent with the results of the throughput benchmark, with the WD Red drives slightly lagging behind the other drives (432ms read and 157ms write). The Seagate NAS drives and Seagate Enterprise NAS drives posted very similar numbers in both read and write (roughly 390ms and 115ms, respectively).

In the iSCSI configuration of the max latency benchmark, the WD Red drives demonstrated an improvement in write performance compared to previous benchmarks, outperforming both of the other drives with 827ms. However, the Seagate NAS drives performed much better than the WD Red drives in terms of read functions (622ms vs. 933ms, respectively).

Compared to the fixed 16 thread, 16 queue max workload we performed in the 100% 4k write test, our mixed workload profiles scale the performance across a wide range of thread/queue combinations. In these tests, we span workload intensity from 2 threads and 2 queue up to 16 threads and 16 queue. All of the drives that we tested in CIFS performed similarly, although the Seagate NAS drives posted higher numbers for the most part, and the WD Red drives performed on the lower end of the spectrum. 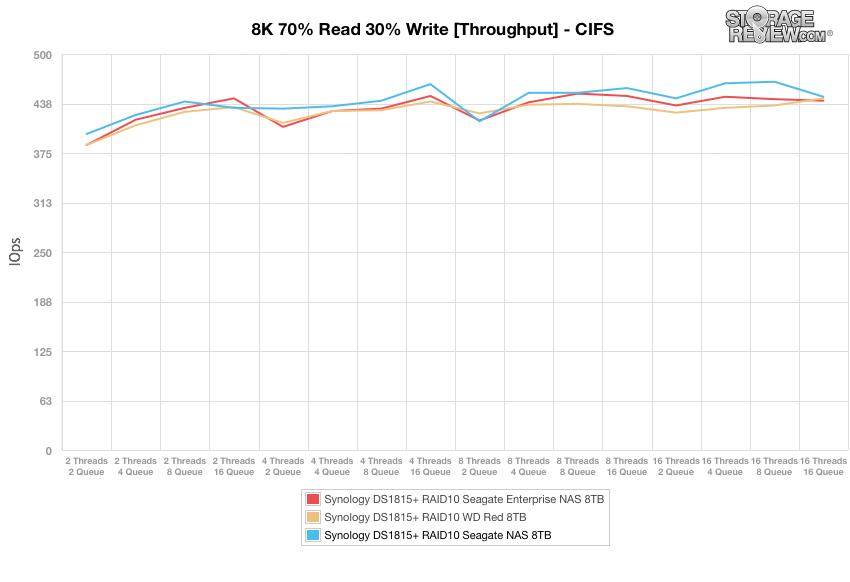 The results were similar in the iSCSI configuration; the Seagate NAS drives outperformed both the WD Red drives and the Seagate Enterprise NAS drives. 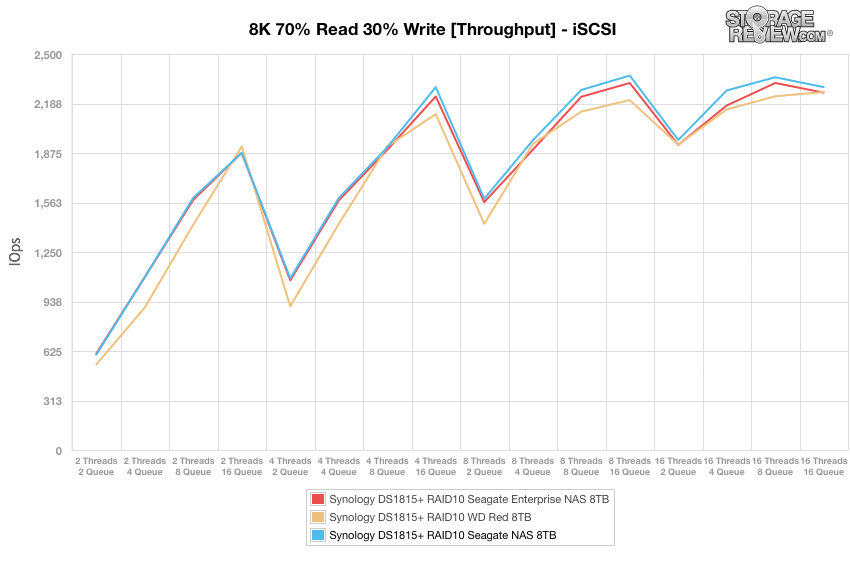 We saw consistent results in the CIFS configuration of our average latency benchmark, with the Seagate NAS drives slightly outperforming the others and the WD Red drives performing slightly slower. 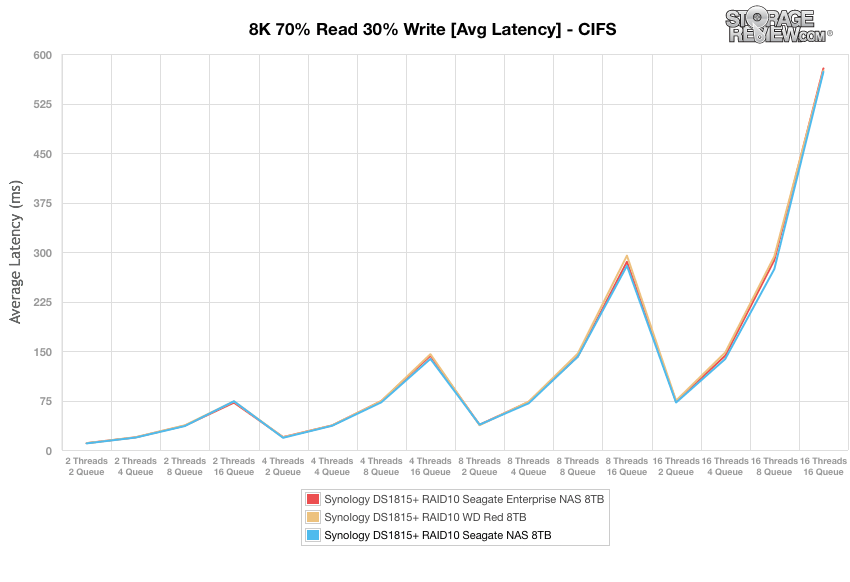 In our average latency benchmark (iSCSI), most of the drives exhibited similar latencies, but the Seagate NAS drives did outperform the others. 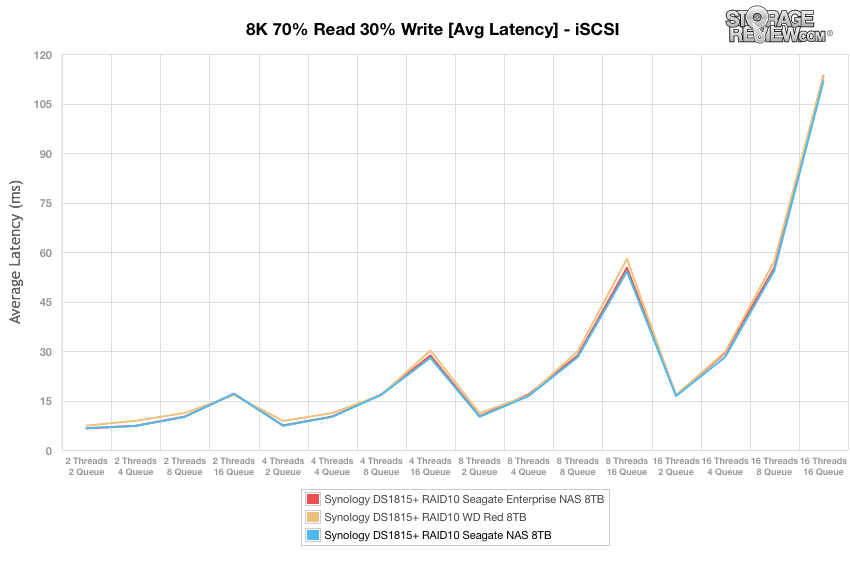 The results of our max latency benchmark (CIFS) were scattered, but the Seagate NAS drives tended to be the slowest drives, especially towards the end of the test. 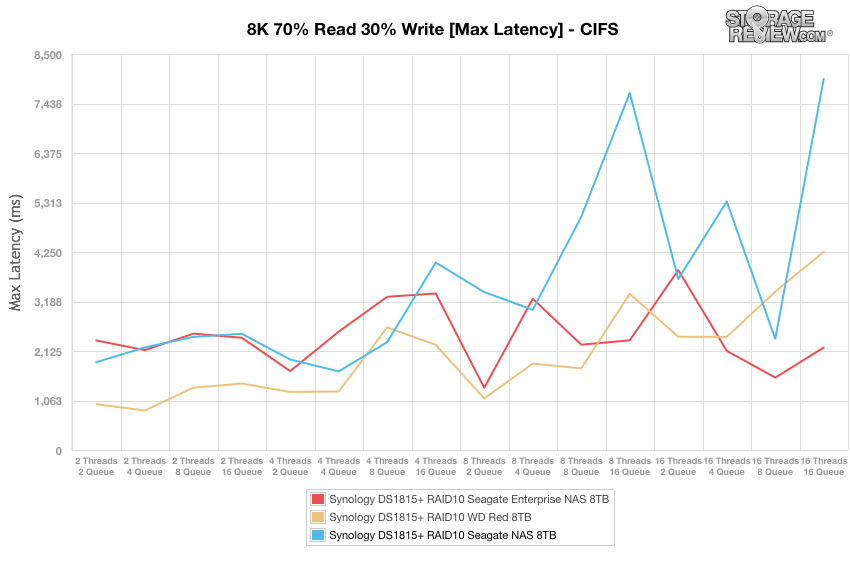 The Seagate NAS drives were the top performers in the iSCSI configuration of our max latency benchmark. The WD Red drives and Seagate Enterprise NAS drives exhibited marginal differences in performance. 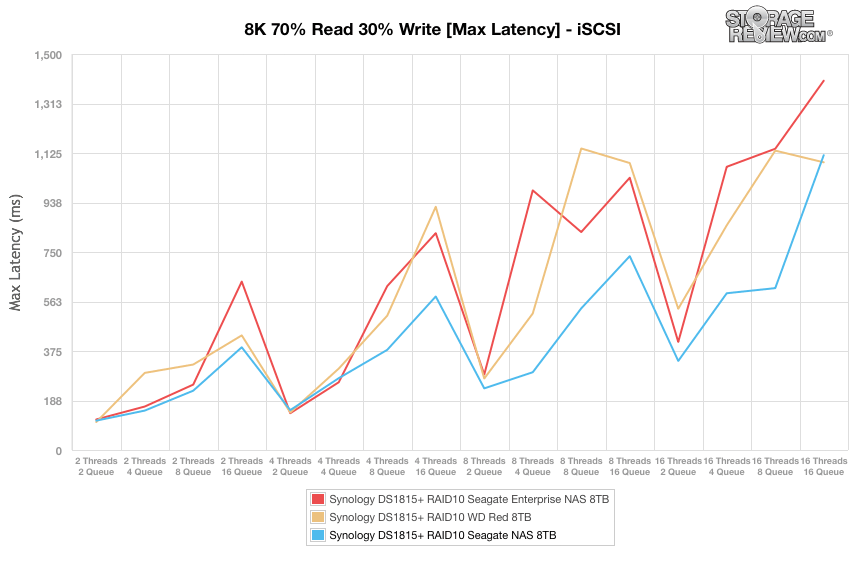 The Seagate NAS and Seagate Enterprise NAS drives were neck and neck for the duration of our standard deviation benchmark (CIFS), but the WD Red drives were the top performers. 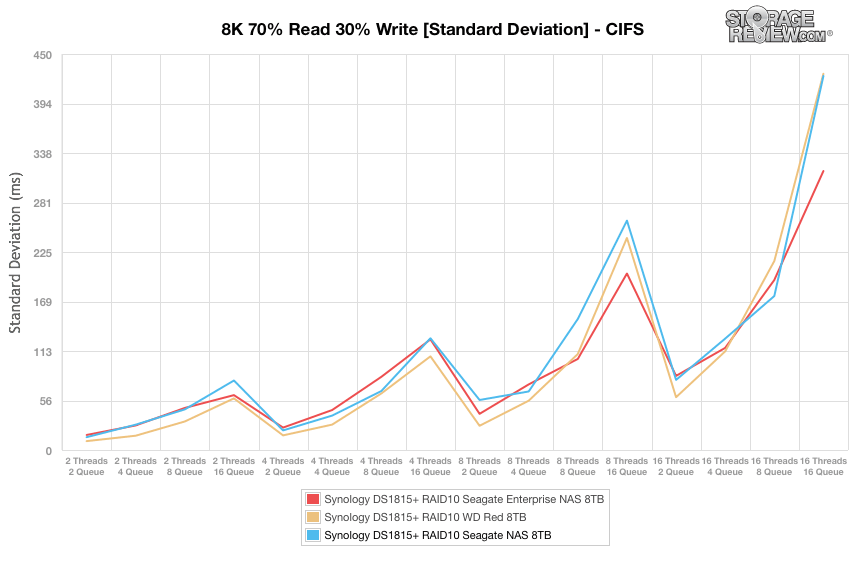 The Seagate NAS drives performed slightly better than the Seagate Enterprise NAS drives, but both outpaced the WD Reds. 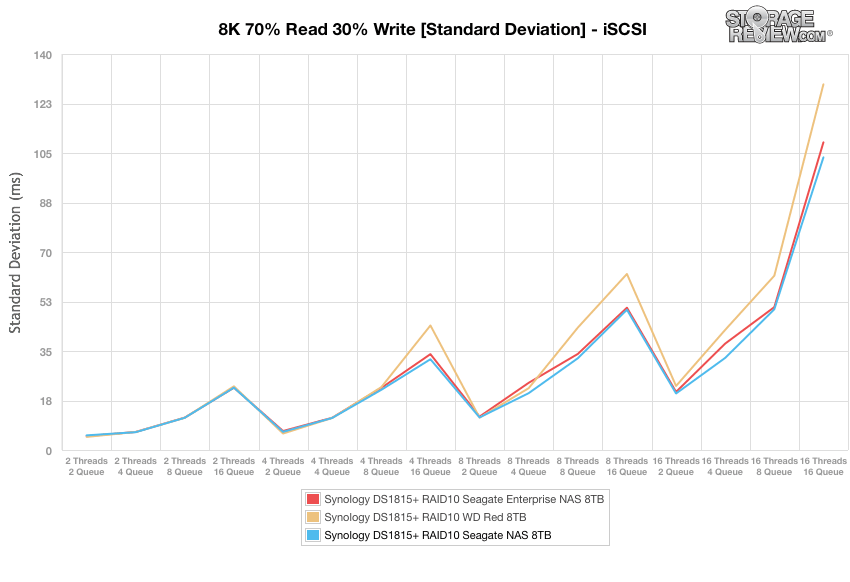 The last test in our Enterprise Synthetic Workload testing is the 128k test, which is a large block sequential test that shows the highest sequential transfer speed for a platter drive. Looking at the 128k performance of 100% write and 100% read activity (CIFS), all three drives shared similar numbers, especially in read functions (roughly 462,000 KB/s). However, there was some slight variation in write functions, with the Seagate NAS drives leading the benchmark (443,000 KB/s).

Seagate's well-established line of NAS HDDs makes use of specialized firmware (NASWorks) that optimizes the drives for use in a server setting. The most notable reasons for choosing one of Seagate's NAS drives in lieu their standard desktop drives pertain to vibration and power consumption. The NAS drives are equipped with dual-plane balanced motors that attenuate the vibrations that HDDs typically make. In a typical SOHO NAS setting, wherein up to 8 HDDs are spinning simultaneously, gratuitous vibrations could potentially disrupt performance or damage the drives themselves. Now that NAS servers are becoming more prevalent in the consumer market, specialized NAS drives that account for the added vibrations have become essential. Another common issue with any server is temperature control, which is more or less dependent on the energy use of the drives. Seagate's NAS drives are more energy efficient than typical desktop drives, which helps with heat production as well as running costs.

The Seagate NAS HDDs held up quite well compared to the WD Red drives; in most of our benchmarks, the Seagate drives were faster. In our 4K random performance, the Seagate NAS came out as the top performer even beating out the enterprise version of the same drive. The drive had the highest write throughput in both CIFS (2,246 IOPS) and iSCSI (1,646 IOPS). The Seagate NAS drive also had the lowest average latency in both CIFS (113.92ms) and iSCSI (155.47ms). The drive also had the highest write bandwidth in our large block 128K for CIFS with 443MB/s. The performance gain is largely due to the faster spindle (7,200RPM vs. 5,400RPM) of course, which carries with it some penalties around thermals and power consumption. Ultimately though, if performance is the key metric for a small NAS deployment, the Seagate NAS 8TB provides an excellent combination of performance, capacity and price point.

Seagate's line of NAS HDDs boost maximum capacity to 8TB and offer a compelling suite of features and performance that are intended to get the most out of small NAS systems.

This is what happens when you let your social medi

Our latest podcast with @vmware is up! Check it ou