The SMART Storage Systems (a SanDisk company) CloudSpeed 1000 is a 7mm 2.5" enterprise SSD engineered for server and cloud computing environments. The drive offers a 6Gb/s SATA interface, capacities from 100GB to 960GB, and utilizes 19nm MLC NAND with specialized features designed to offer high endurance. The CloudSpeed 1000 from Smart comes in two variations, the 1000 and 1000E, to meet the varying needs of organizations that require either maximum capacity or greater levels of endurance. The CloudSpeed 1000 ships in capacities of 120GB, 240GB, 480GB and 960GB, while the CloudSpeed 1000E arrives in 100GB, 200GB, 400GB and 800GB models. That extra over-provisioning on the 1000E model yields 7,680TBW, with the 1000 at 3,070TBW.

The SMART Storage Systems (a SanDisk company) CloudSpeed 1000 is a 7mm 2.5" enterprise SSD engineered for server and cloud computing environments. The drive offers a 6Gb/s SATA interface, capacities from 100GB to 960GB, and utilizes 19nm MLC NAND with specialized features designed to offer high endurance. The CloudSpeed 1000 from Smart comes in two variations, the 1000 and 1000E, to meet the varying needs of organizations that require either maximum capacity or greater levels of endurance. The CloudSpeed 1000 ships in capacities of 120GB, 240GB, 480GB and 960GB, while the CloudSpeed 1000E arrives in 100GB, 200GB, 400GB and 800GB models. That extra over-provisioning on the 1000E model yields 7,680TBW, with the 1000 at 3,070TBW. 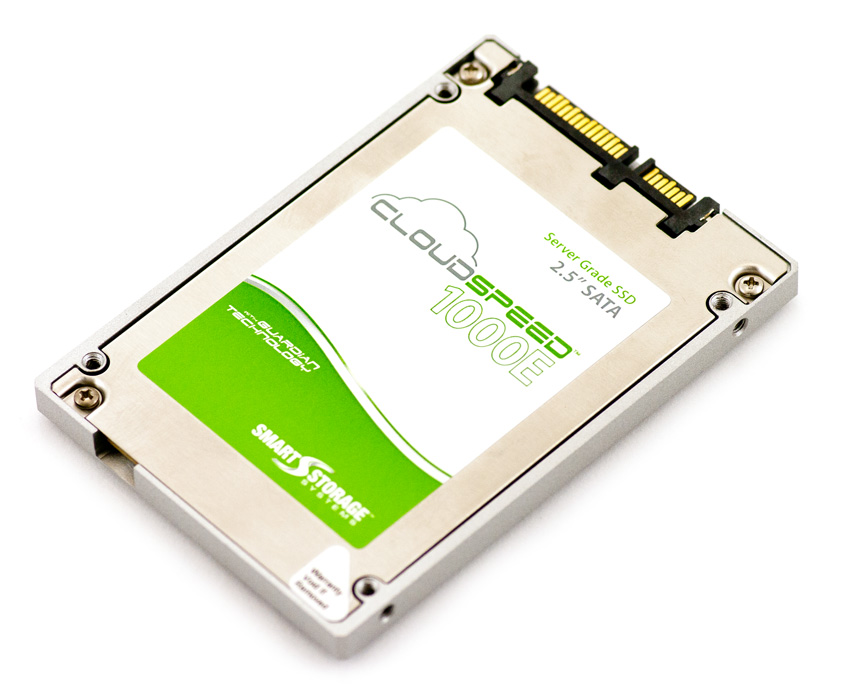 Smart achieves the quoted high endurance spec as well as a rating of 1-6 DWPD with the 1000 and 3-7 DWPD with the 1000E by implementing its Guardian Technology, which is a set of enterprise features and endurance enhancement technologies that largely deal with how the NAND is interacted with. On top of the figures above, the CloudSpeed 1000 series SSDs also feature backup power circuit technology to protect in-flight data, full data path protection, data fail recovery, thermal monitoring, and AES 256-bit encryption. The SSDs also have a solid MTBF rate of 2 million hours, at the upper-end of the spectrum.

These features all deliver more value to enterprises that constantly need to focus not just on the transfer rate performance figures of perspective storage technologies, but also on what kind of TCO the drives will deliver through their warranted endurance period. That’s a primary factor in Smart’s drive development process as they attempt to drive down costs while maintaining enterprise features and endurance. Having said that, the CloudSpeed 1000 and 1000E aren’t lacking in performance specs either; they provide sustained throughput of up to 450MB/s read and 350MB/s write as well as up to 80K/25K random IOPS (80K/30K on 1000E).

The sides of the SSD feature four screw holes for simple mounting, and the front of the drive houses the standard SATA and power connectors. This drive comes in a 2.5", 7mm form factor. 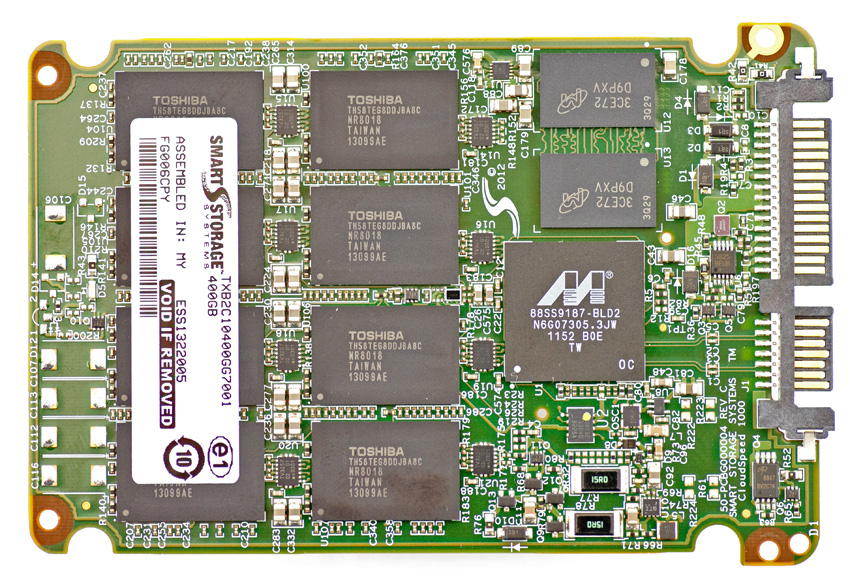 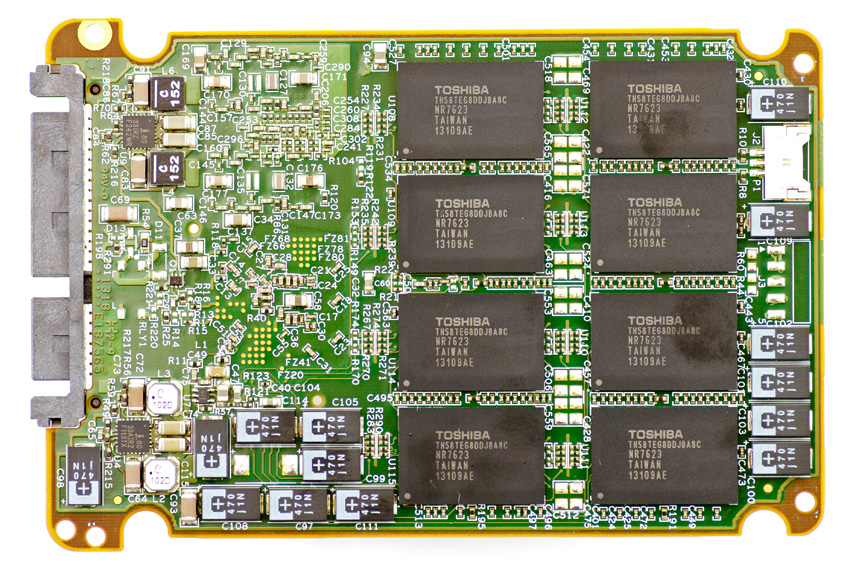 Also visible on the bottom of the PCB are the powerfail capacitors on both ends of the drive. These work to allow the drive to finish writing data over in the event of a, unexpected power loss. Additionally, there is a pink thermal pad that dispels heat from the controller (reverse side) into the metal casing to help keep the drive in a typical operating temperature range.

In the enterprise market there is a huge difference between how products claim to perform on paper and how they perform in a production environment. We understand the importance of evaluating storage as a component of larger systems, most importantly how responsive storage is when interacting with key enterprise applications. To this end, we’ve rolled out our first application tests including our proprietary MarkLogic NoSQL Database Storage Benchmark and MySQL performance via SysBench.

In our MarkLogic NoSQL Database environment, we test groups of four SATA or SAS SSDs with a usable capacity greater than or equal to 200GB. Our NoSQL database requires roughly 650GB of free space to work with, evenly divided between four database nodes. In our testing environment, we use an SCST host and present each individual SSD in JBOD, with one allocated per database node. The test repeats itself over 24 intervals, requiring between 30-36 hours total for the SSDs in this category. Measuring the internal latencies seen by the MarkLogic software, we record both total average latency, as well as interval latency for each SSD.

In our overall average latency ranking of our MarkLogic NoSQL database benchmark, the new Smart CloudSpeed 1000E took the top spot in our SATA SSD group, beating out the Intel SSD DC S3500.

Switching our focus from the overall average latency view to how the 1000E performed on an interval by interval basis, the SSD had higher latency spikes than the Intel DC SSDs, but in aggregate lower latency overall. We measured the greatest spikes in the 10-60ms range. 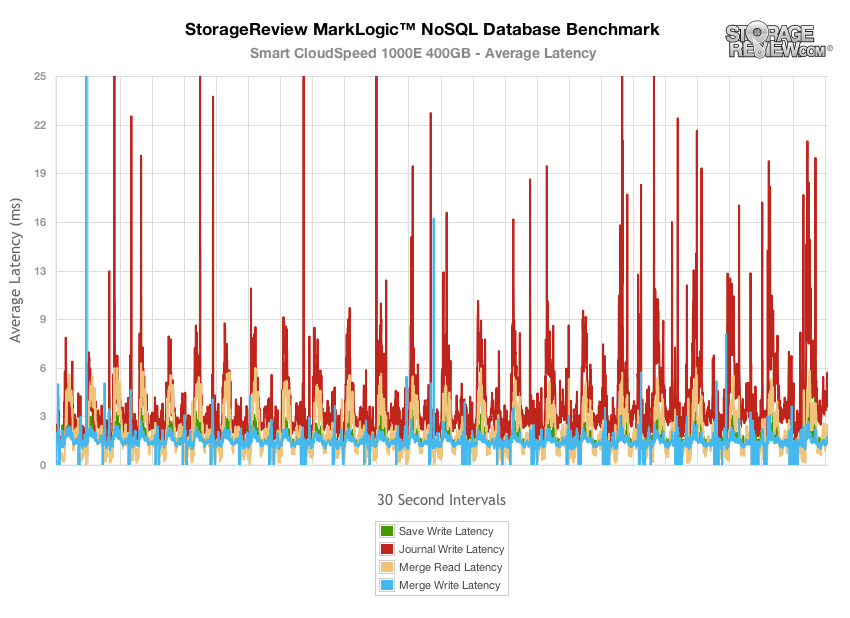 In second place, the Intel S3500 shines in our NoSQL environment, with latency spikes staying between 6-19ms over the entire test. 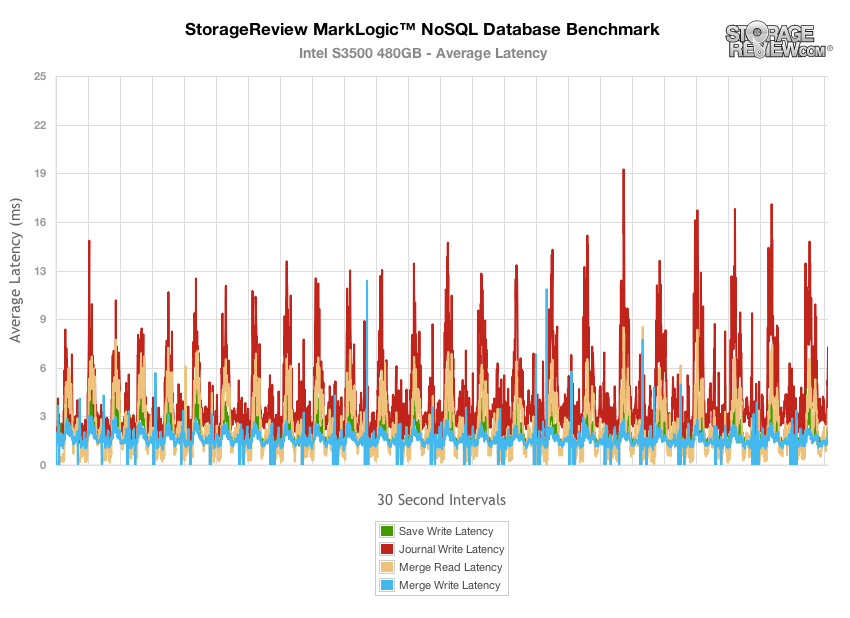 The Intel S3700 came in third to the S3500, even with its higher-performance (but lesser capacity) NAND configuration. It had latency that crept up slightly compared to the S3500, with spikes measuring between 10-32ms. Overall it still performed quite well in our NoSQL test. 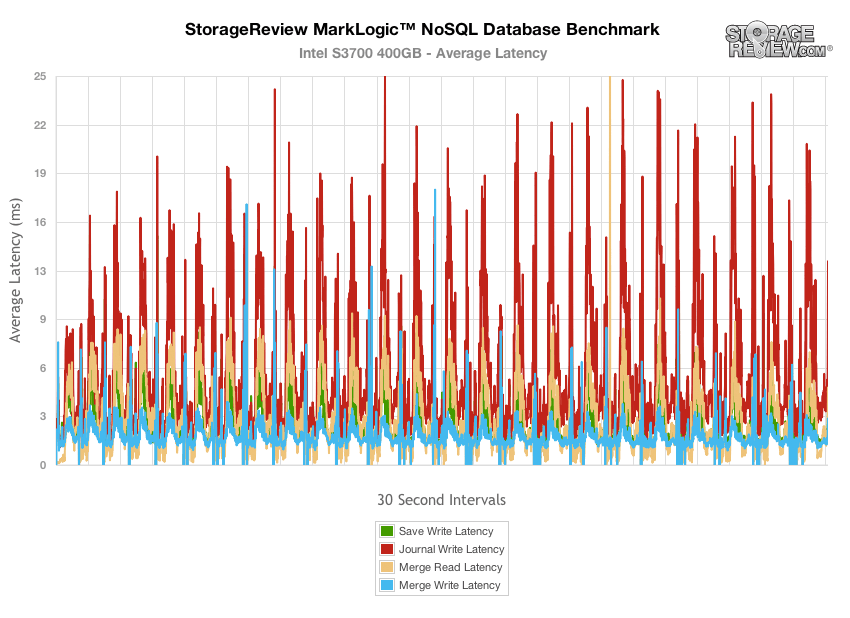 Moving to the next SSD in the light-enterprise category that we included in our MarkLogic tests, latency started to pick up significantly. We recorded peaks as high as 1,907ms, with many peaks measuring between 60-100ms. 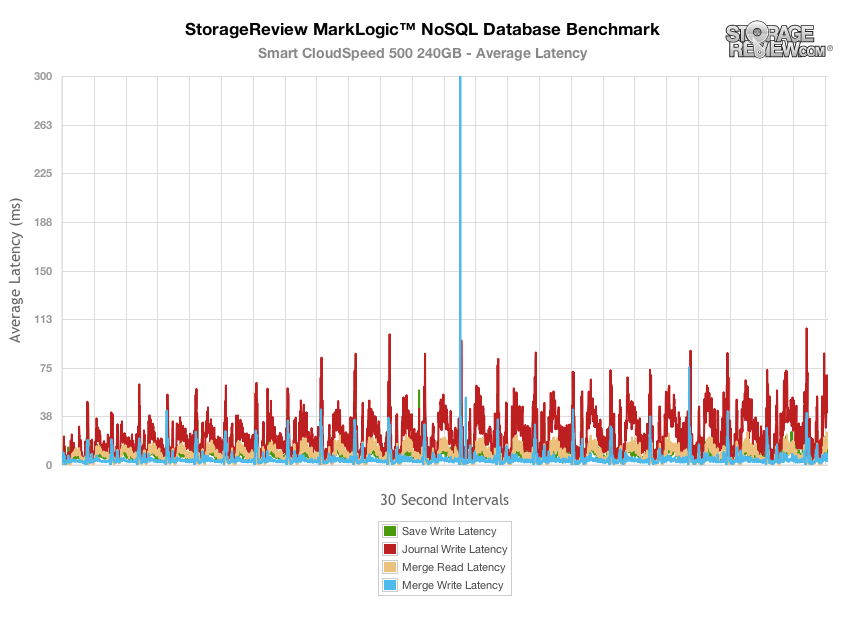 Next in line was the Samsung SM843, which further pushed up the latency ceiling with spikes measuring between 150-500ms in steady state and one spike topping 1,562ms. 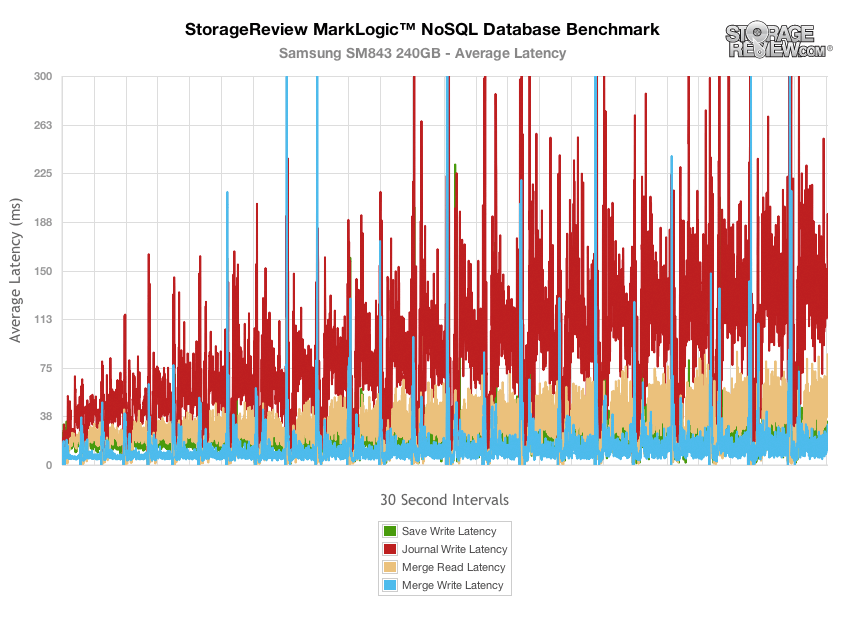 The Seagate 600 Pro came in towards the bottom in our MarkLogic NoSQL testing, with latency picking up significantly as the drive neared steady state performance. With this SSD, latency peaks measured between 150-400ms, with the largest spike of 490ms. 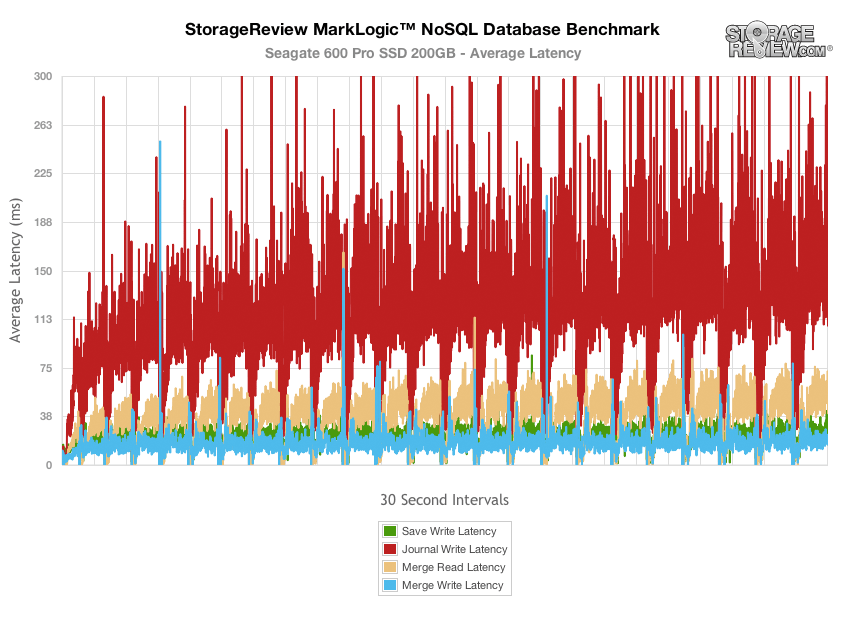 Our next application test consists of Percona MySQL database test via SysBench which measures the performance of OLTP activity. In this testing configuration, we use a group of Lenovo ThinkServer RD630s and load a database environment onto a single SATA, SAS or PCIe drive. This test measures average TPS (Transactions Per Second), average latency, as well as average 99th percentile latency over a range of 2 to 32 threads. 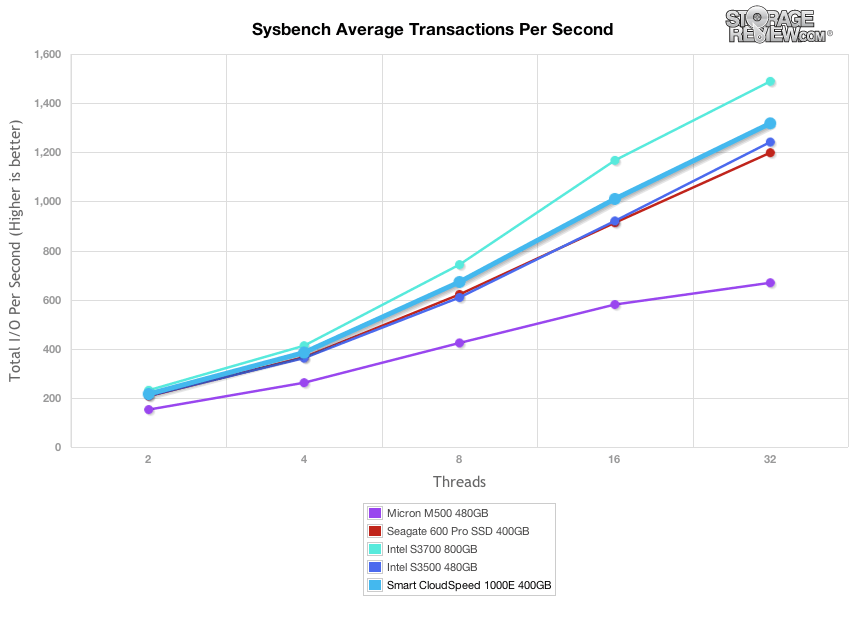 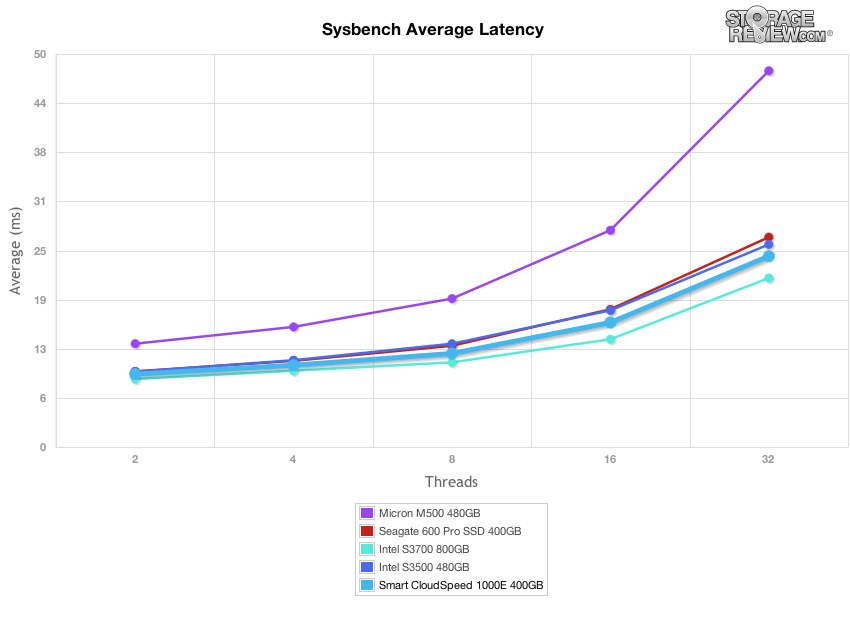 Examining the lowest overall 99th percentile latency, the Smart CloudSpeed 1000E stood slightly against other drives at the top of our Sysbench test with higher figures as the thread-count increased. 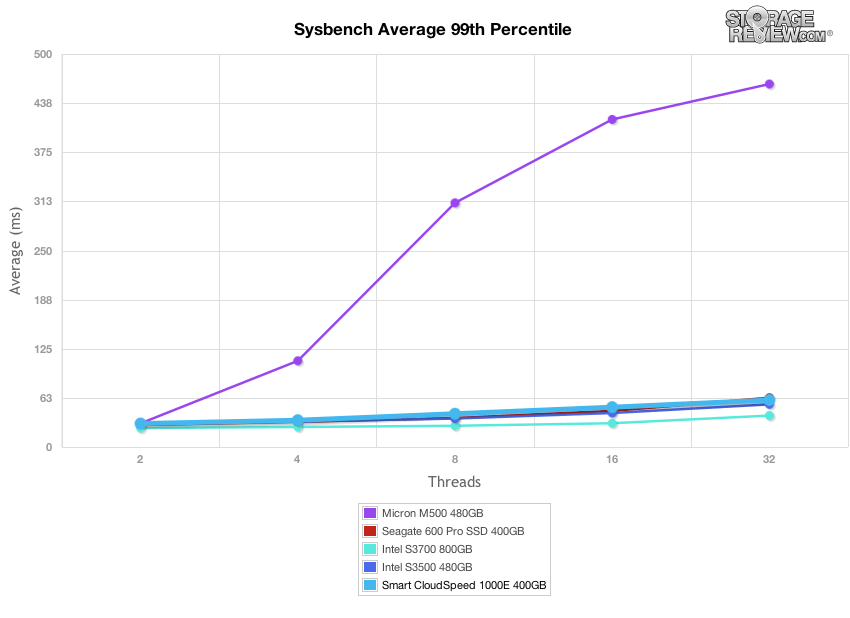 With a heavy 16T/16Q load, the Smart CloudSpeed 1000E measured 5ms in burst and scaled up to 9ms entered steady state. 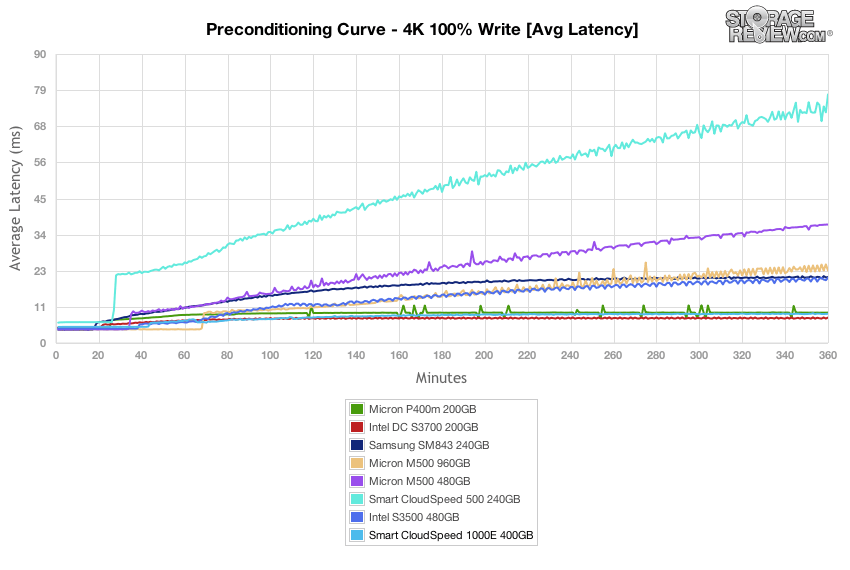 The Smart CloudSpeed 1000E offered competitive max response times staying below 100ms in burst and as the SSD entered steady state. This performed well against the competing read-heavy SSDs, although ranked lower middle of the pack against other high-endurance enterprise SATA SSDs. The Smart CloudSpeed 1000E came in second in the standard deviation part of our 4k preconditioning test, coming in second to the Intel DC SSD S3700. 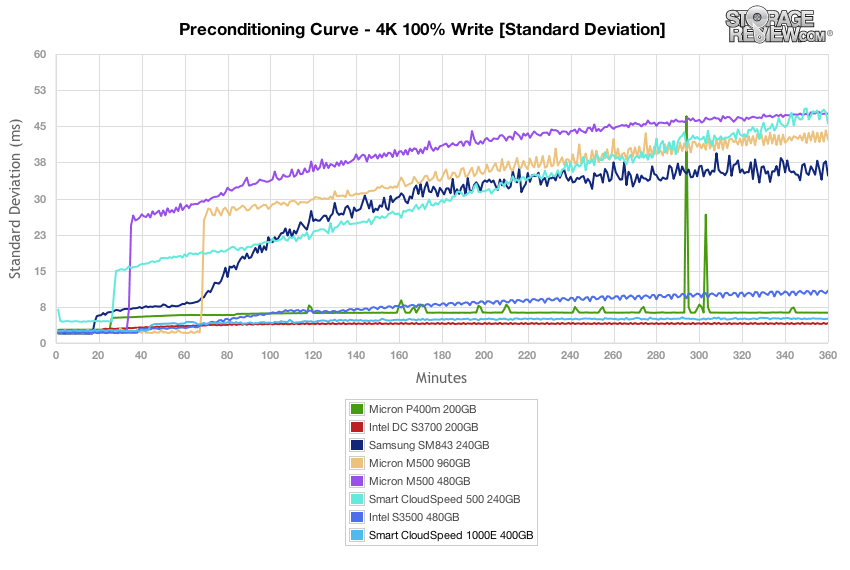 After finishing its 6 hours of preconditioning, the Smart CloudSpeed 1000E had read throughput that measured 70,224 IOPS and write throughput of 28,034 IOPS. The 1000E’s write performance was near the top of the pack, only bested by the S3700.

In terms of latency consistency, the Smart CloudSpeed 1000E came in second in this group in 4K read and write standard deviation.

In our next workload, we look at a full random 8k profile with a 70/30 read/write mixed ratio. Under these conditions, the Smart CloudSpeed 1000E started off around 15,200 IOPS burst (out of a secure-erase session) which ramped to a peak of around 30,000 IOPS and leveled off to a speed around 27,500 IOPS in steady state. 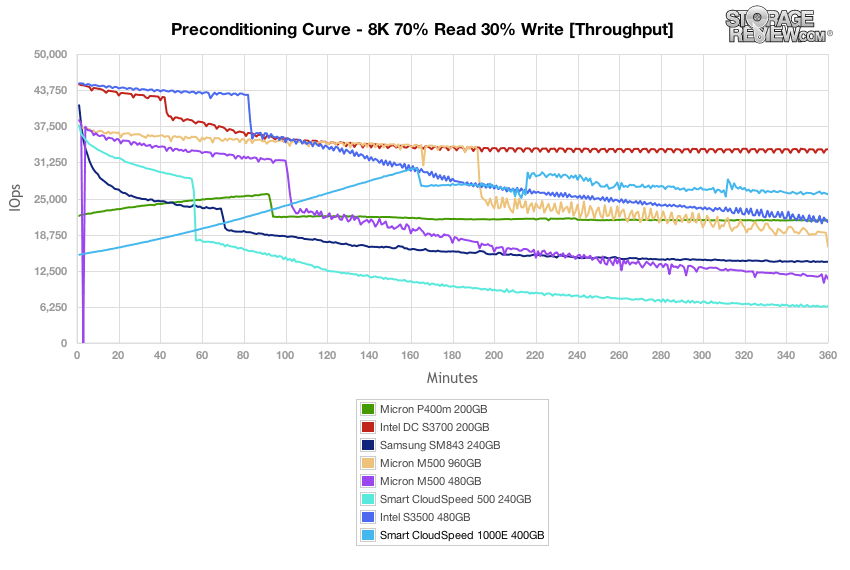 Average latency of the Smart CloudSpeed 1000E measured 16.7ms at the beginning of our 8K 70/30 preconditioning test, which leveled off to just under 10ms as the SSD neared steady state. Compared to the fixed 16 thread, 16 queue max workload we performed in the 100% 4k write test, our mixed workload profiles scale the performance across a wide range of thread/queue combinations. In these tests, we span workload intensity from 2 threads and 2 queue up to 16 threads and 16 queue. In the expanded 8k 70/30 test, the Smart CloudSpeed 1000E peaked at 25,532 IOPS with a workload of 16T/16Q, which was again bested only by the Intel SSD DC S3700. Average latency for the Smart CloudSpeed 1000E was strong for the entirety of the test, second to only the Intel SSD DC S3700. 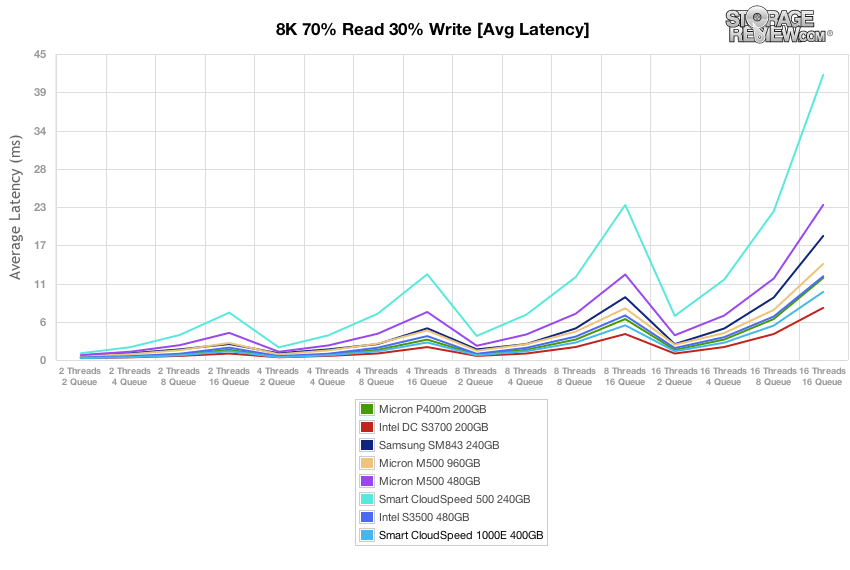 Over the duration of our varying load 8k 70/30 test, max latency stayed very low from the Smart CloudSpeed 1000E, with the peaks staying between 50-80ms for the majority of the test, although we measured some spikes as high as 110ms Standard deviation from the Smart CloudSpeed 1000E in our test environment ranked well against the read-focused enterprise SSDs and towards the lower middle of the pack against the write-focused models. The SMART Storage Systems CloudSpeed 1000 series SSDs are enterprise-class drives that ship in a 2.5", 7mm form factor and have been designed for use in server and cloud computing environments. Smart provides two variations of the drive with both the 1000 and 1000E, differentiated by their 7/22% over-provisioning levels that enhance endurance and performance. The CloudSpeed 1000 offers 3,070TBW and 1-6 drive writes per day, versus 7,680TBW and 3-7DWPD with the CloudSpeed 1000E. Additionally, the 1000 ranges up to 960GB in total raw capacity, while the 1000E peaks slightly lower at 800GB because of its 22% over-provisioning. As far as performance goes, Smart quoted the drives at 450MB/s read and 350MB/s write, with random workloads hitting 80/25K IOPS (80/30K on the 1000E).

When we dive into performance of the four 1000E’s that we tested, we see a picture that competes very well against the current crop of SATA enterprise SSDs. The 1000E excelled in our MarkLogic NoSQL application test, offering the lowest overall average latency. In our Sysbench MySQL benchmark the 1000E came in second to the Intel DC S3700. In both of our synthetic workloads, the 1000E offered competitive throughput numbers and ranked near the top of the pack in terms of max latency and standard deviation. One of its weaknesses that we spotted across multiple workloads, application and synthetic, include slightly higher latency spikes compared some of the other high-endurance SATA enterprise models. Overall though the CloudSpeed 1000E proved itself quite well, considering its leveraging 19nm vs the 25nm NAND found in the Intel S3700 or Micron P400m.

The Smart Storage Systems CloudSpeed 1000 and 1000E bring features like superior endurance, power fail protection and top-tier performance to use cases where buyers don’t want to compromise when it comes to their desire to have enterprise-grade features and performance at a lower price point.