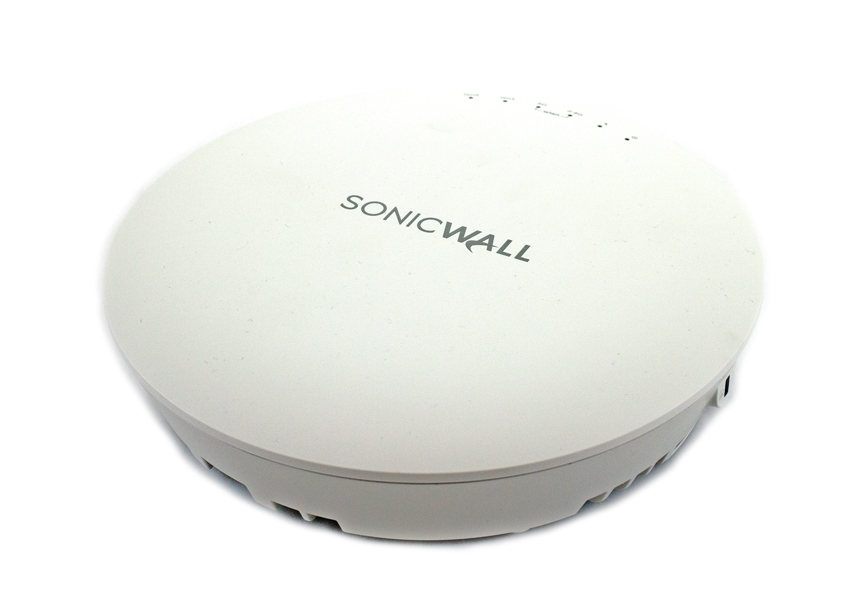 High-speed connectivity to the firewall is no small feat. The NSA 2650, for instance, includes eight native 2.5GbE ports. When connecting the SonicWave 432i directly to the 2650, devices connected to the SonicWave will have the best access available. When a handful of networked laptops are connected, the benefit may be negligible. But with the world of connected devices bursting at the seams, having a thicker pipe for access points is going to be increasingly important, and in many cases, required.

SonicWave access points are designed to be flexible for deployment either indoors (432e and 432i) or out (432o). All of the models are plenum rated, meaning they are safe to be installed above-ceiling or suspended from drop ceilings. Auto-configuration and centralized wireless monitoring and management are administered through the firewall, meaning admins only have one place to go to manage all of the SonicWall devices. It's also important to note that the access points aren't simply traffic cops; they also provide deep-packet-inspection scanning of encrypted traffic.

Moreover, 2.5Gb/s is not a common data-center speed. Speeds of 2.5 along with 5Gb/s are new entrants as of September last year when they were officially added to the Ethernet standard. What is nice about these speeds, and their addition to the SonicWave Series of APs, is that they are designed to work over existing Cat5 and Cat6 cabling, meaning no new cables to run. This is a big deal for school campuses, for example, where pulling all new cabling is expensive and may push projects out of budget. These new speeds are leveraged in a more campus-style format and used as an in-between speed for those who want faster than 1G, but don’t quite need 10G. While the SonicWave APs have this technology, devices like the Dell N3132 32-port switch can only currently utilize it. To get around these limitations in the case of the SonicWave 432i, users can direct connect it to the NSA 2650 firewall with a PoE power injector.

The SonicWave 432i is a small round access point with internal antennas, so it is more or less smooth on the outside. White in color (to match most office ceilings), the downward-facing part of the device has light gray branding, as well as six small LED lights (LAN1, LAN2, 5GHz, 2.4GHz, Test, Power). 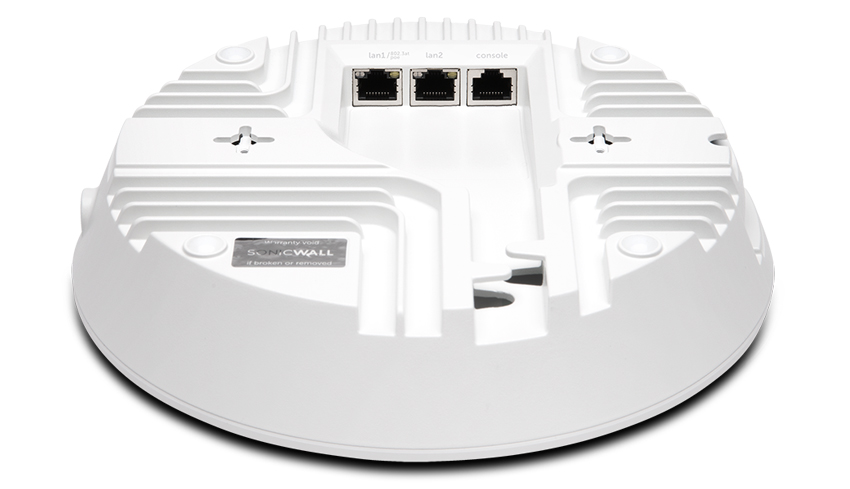 The upward-facing side (or the side that will be attached the to the ceiling) has three ports (LAN1/PoE, LAN2, and Console), as well as deep ventilation grooves and methods of attachments to affix it to drop ceilings and other supports.

Deploying the SonicWave access point is really easy. Users simply go to their SonicWall firewall and use or create a wireless access point. With interface ports allocated to the WLAN zone, the SonicWall firewall then auto-detects and auto-provisions the access point(s) across the network. This can be a huge time saver, since all the management and provisioning are handled in one spot, requiring less time individually managing multiple access points through different interface screens. It also saves time by allowing users to plug in a brand-new access point, letting the firewall then sort out software updates and push the current network information to the AP automatically.

Once the SonicWave 432i was installed on the ceiling, we plugged it in and let our SonicWall take over. It detected and provisioned the unit, which we then managed through our SonicWall. Through the Manage tab, we were able to pull up the access points under Connectivity on the left-hand side. Under Dashboard, we were able to see how many APs we had connected and online, Client Association, and a Real-Time Bandwidth readout. 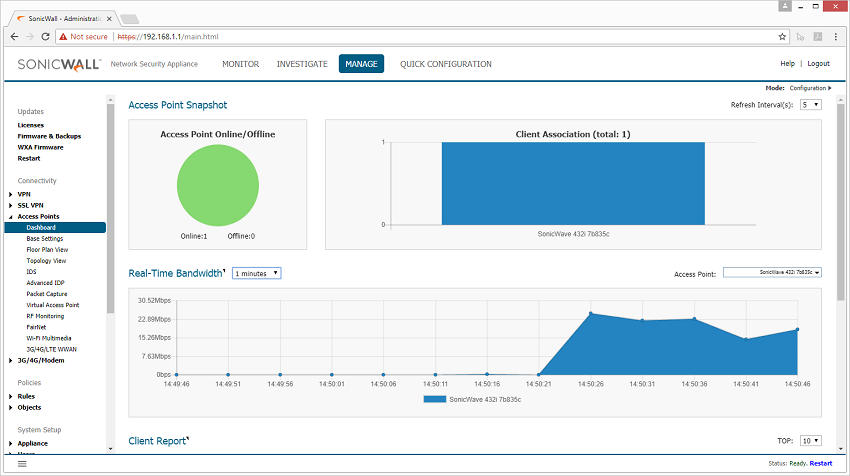 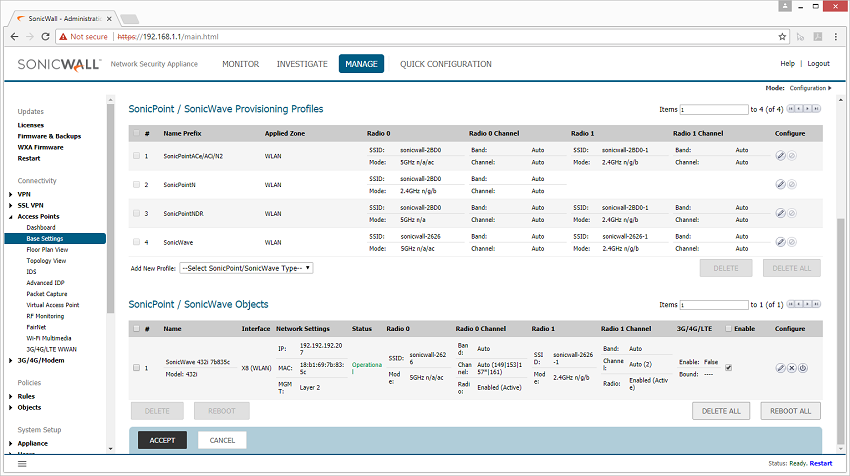 The SonicWave AP also has a topology view that automatically maps devices and how they are connected in the wireless network architecture. This can help users visualize how different APs are balanced in a given environment. 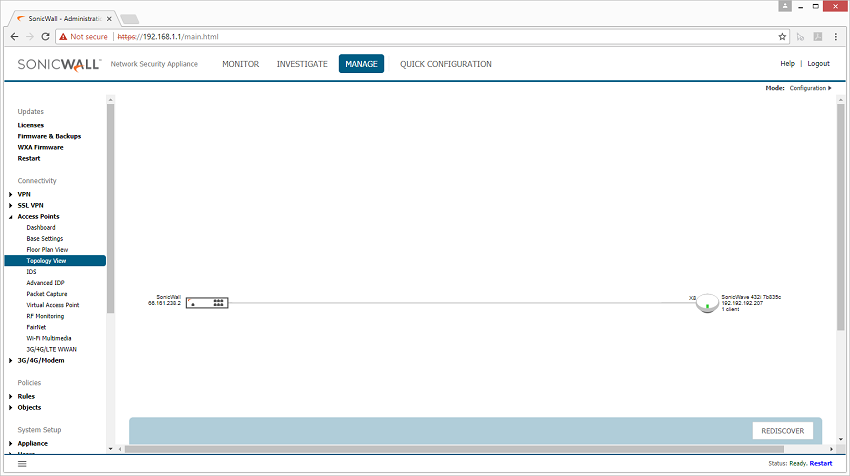 The SonicWall SonicWave series of Access Points is designed to deliver secure wireless Internet without sacrificing performance to do so. They come in three flavors: two indoor versions (one with external antennae and one with internal) and one outdoor version. In terms of performance, the SonicWave 432i is able to push greater than gigabit speeds over traditional wiring, supporting 2.5Gb/s connectivity over standard CAT5e wiring. This helps drive value for users looking to push greater wireless performance in a campus or similar commercial setting where upgrading infrastructure wiring can be cost prohibitive.

The management aspect of the SonicWall SonicWave makes the units easy to deploy and manage in the field. All control is centralized to a SonicWall firewall, which handles everything from firmware upgrades to rapid deployments with configuration profiles. Management after the first day is also simplified, with administrators having full control over each access point through the same SonicWall web interface as the primary firewall.

The SonicWave Wireless Security Series is an easy-to-manage series of Access Points that deliver security and higher performance to all wireless devices in the office.