Synology has released its first 5-bay value series NAS; the DS1515. Synology cut costs on this model by loading it with a lower-end CPU (Quad Core 1.4GHz Alpine AL-314) and fewer USB 3.0 ports, but it still provides all of the features one would expect with a Synology DiskStation. It would be ideal for budget-minded businesses that don’t mind a bit of a dip in performance compared to the DS1515+, which would cost about $150 more.

Synology has released its first 5-bay value series NAS; the DS1515. Synology cut costs on this model by loading it with a lower-end CPU (Quad Core 1.4GHz Alpine AL-314) and fewer USB 3.0 ports, but it still provides all of the features one would expect with a Synology DiskStation. It would be ideal for budget-minded businesses that don’t mind a bit of a dip in performance compared to the DS1515+, which would cost about $150 more. 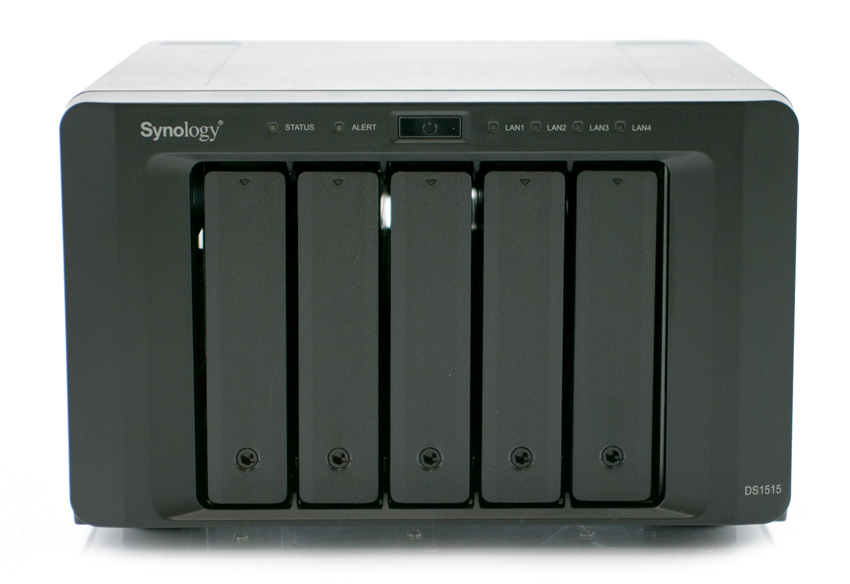 The DS1515 comes with all of the same benefits that most of the DiskStation includes. In terms of scalability, this model can be expanded up to 15 drive bays with the proper expansion hardware (DX513). If multiple DiskStations are associated with a central server, Central Management System (CMS) can be used to access all of them through a single entry point. Synology High Availability (SHA) clusters active and passive servers, and uses Heartbeat detection to prompt passive takeover if an active server goes down. Quad LAN and link aggregation provide additional redundancy, and the hardware encryption engine allows for encrypted transfers at only a modest reduction in speed. Synology’s DSM OS is also included, which offers a wide range of features for small businesses. Users basically have an all-in-one server when they pair the DS1515 with the add-ons available through DSM (e.g. Mail Server, Print Server).

In terms of backup capabilities, Cloud Station and Backup and Replication (both programs found in DSM), can be used to designate certain servers as backup locations as well as schedule backups. DS1515 data can also be backed up with rsync, Amazon S3, Glacier, Microsoft Azure, hicloud, and several other third party cloud services.

With the exception of the number of USB ports, the DS1515 chassis is identical to that of the DS1515+. It has a matte-black finished with some branding along its face and sides. The five drive bays can be accessed through the face, each with a corresponding status LED. Along the top of the face of the chassis is a system status LED, alert LED, power button, and four LAN LEDs (left to right). 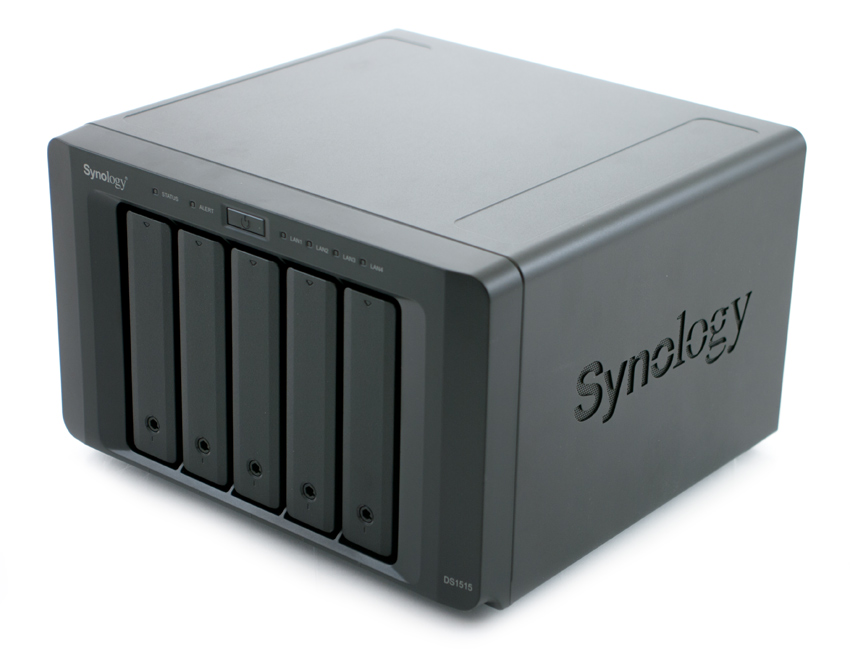 The back of the DS1515 has an AC adaptor, two large fans, a Kensington lock, two eSATA ports, two USB 3.0 ports, four LAN ports, and a reset button. 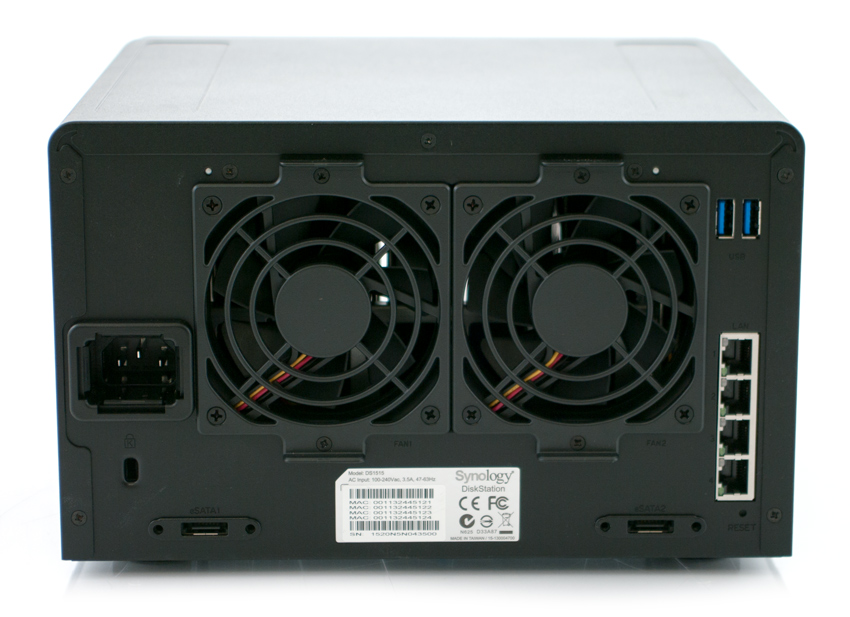 The DS1515 is compatible with the newest version of DiskStation Manager (DSM), 5.2. DSM is a feature-rich web-based operating system that provides users with numerous ways to manage data including documents, multimedia, and important backup files. Synology has packed DSM with a suite of added-value packages and applications to help with business productivity, flexible administrative options, and tools to secure the DS1515 DiskStation and user’s valuable data.

Users can download and install add-ons via the Package Center. These add-ons include ways shares files on the cloud, setting up a VPN environment, and an antivirus application to protect your system.

DSM also offers volume management with Storage Manager, which is a management application that helps to organize and monitor the storage capacity on the DiskStation, with tasks such as: Creating different types of RAID and non-RAID storage configurations (including volumes, disk/RAID groups, iSCSI LUNs, and iSCSI Targets), monitoring the overall storage usage of your DiskStation, inspecting the health of installed drives, and using advanced options, such as hot spare drives, SSD TRIM, and SSD cache.

The results of the average latency benchmark were fairly scattered; the DS1515 loaded with WD drives configured in iSCSI was the leader of read functions (182ms), and the DS1513+ loaded with Seagate drives configured in SMB was the leader of write functions (480ms). Other than that, there weren’t many clear trends in terms of ideal configuration, although iSCSI seemed to be well suited for read functions for the most part.

Our next benchmark measures 100% 8k sequential throughput with a 16T/16Q load in 100% read and 100% write operations. The DS1515 configured in CIFS was the top performer in both read and write functions, posting almost identical results regardless of drive selection (around 40k IOPS read and 30k IOPS write). On the other hand, the DS1515 did not perform well when configured in iSCSI; this configuration posted the lowest numbers.

Compared to the fixed 16 thread, 16 queue max workload we performed in the 100% 4k write test, our mixed workload profiles scale the performance across a wide range of thread/queue combinations. In these tests, we span workload intensity from 2 threads and 2 queue up to 16 threads and 16 queue. Devices configured in iSCSI performed well in the throughput benchmark, and the DS1513+ configured in iSCSI posted the highest numbers overall (although the DS1515 was in line with its performance). 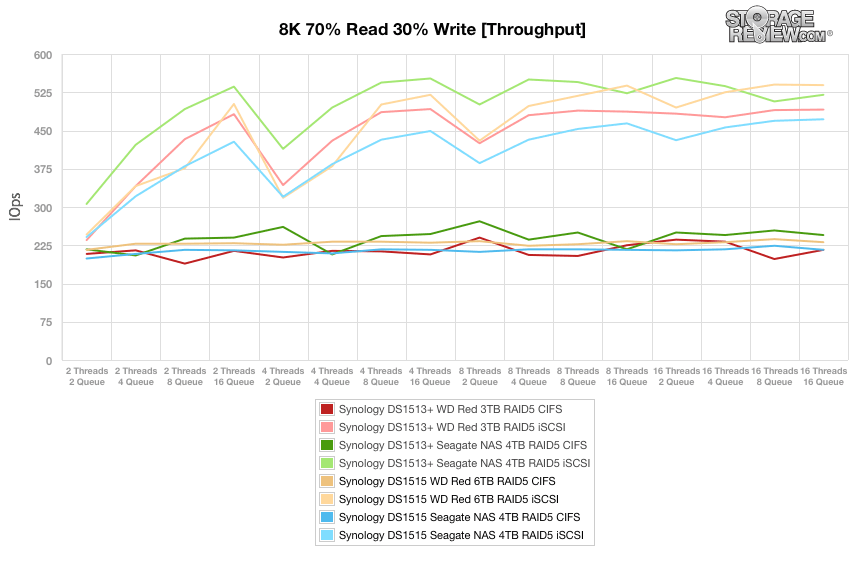 As is expected, the results of the average latency benchmark more or less mirrored those of the throughput benchmark; iSCSI configurations outperformed CIFS configurations, but there weren’t significant differences between devices within either configuration. 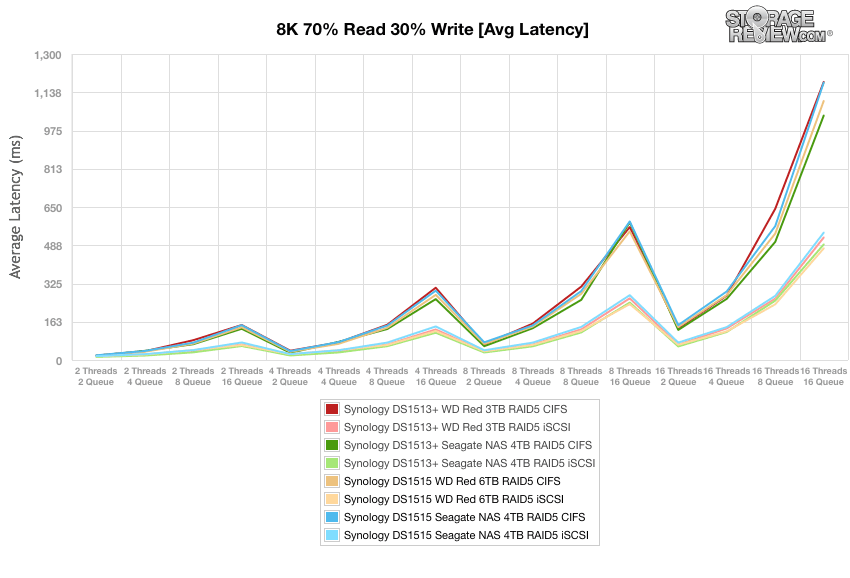 The results of the max latency benchmark were a bit more distinguishable, although in general iSCSI configurations still outperformed CIFS configurations. The DS1513+ loaded with WD drives was the top performer for the most part, but all of the devices fluctuated in performance. 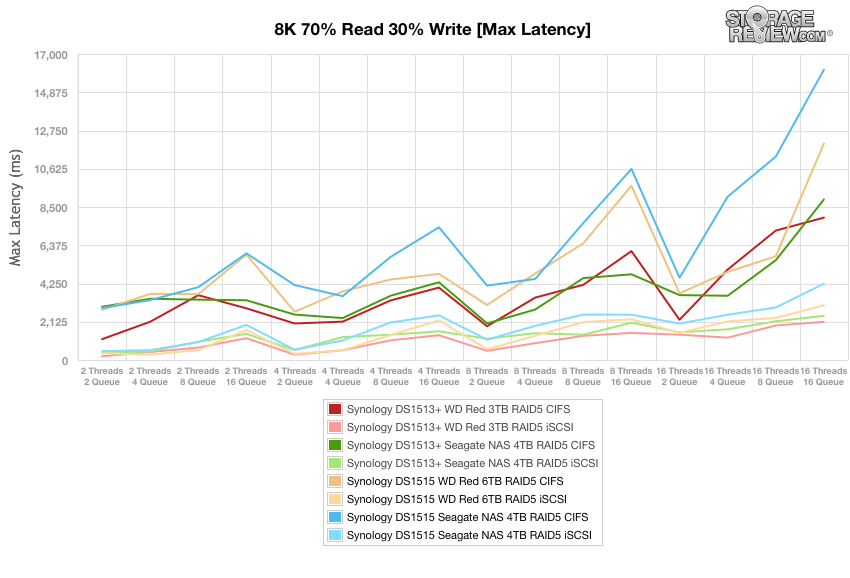 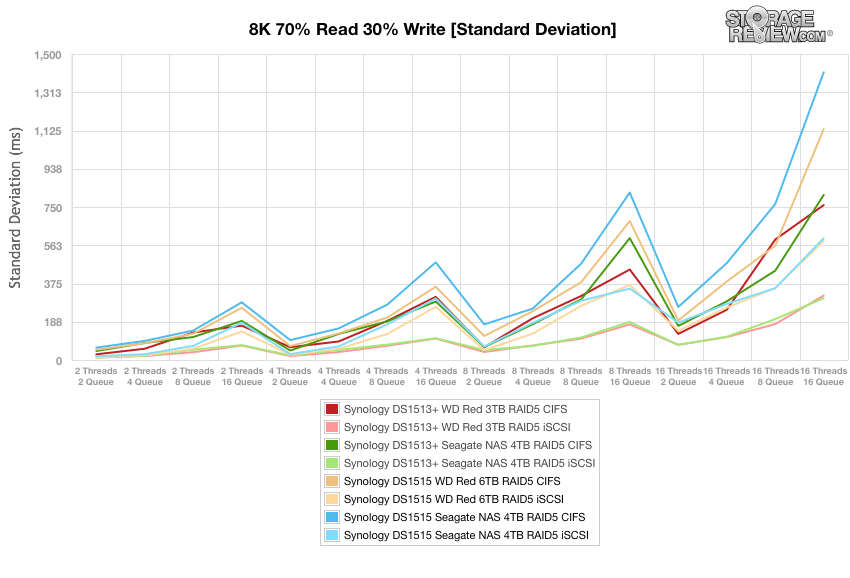 Our last test in our small NAS Synthetic Workload testing is the 128k test, which is a large block sequential test that shows the highest sequential transfer speed. When looking at the 128k performance of 100% write and 100% read activity, the DS1515 configured in CIFS dominated in both read and read (regardless of drive type) with around 454,000KB/s and 434,000KB/s, respectively. The DS1515 configured in iSCSI posted the lowest numbers for the most part, with the exception of the write performance of the DS1515 loaded with WD drives (299,827KB/s).

The DS1515 is Synology’s stripped down version of the DS1515+, the only apparent differences being a lesser CPU and two fewer USB 3.0 ports. It still packs all of the standard features of the DiskStation line, including expandability, redundancy features, hardware encryption, and easy backup capabilities.

In terms of performance, the DS1515 posted numbers that were very similar to the numbers we got from the DS1515+. It performed well over all, generally favoring iSCSI configuration for most functions (especially read functions). It performed very well in 8k sequential and large block benchmarks when configured in CIFS.

The DS1515+ would be a great option for a start-up or budget-minded business that wants to minimize upfront cost, but all things considered it is only 20% in savings (the equivalent of about $150). Knocking back a few more features in exchange for more savings might have made the DS1515 a bit more compelling to buyers.

The DS1515 is a great option for businesses looking to inexpensively acquire an all-in-one server with scalability, good performance, and the breadth of Synology’s DSM offerings.

WD My Passport for Mac Review