The DiskStation DS1817+ is another comprehensive 8-bay NAS system from Synology designed to centralize storage for small growing businesses. At the center of the DS1817+ is a Quad-core 2.4GHz CPU with an AES-NI hardware encryption engine and up to 16GB in dual-channel DDR RAM, components that should allow the NAS solution to work well in most demanding environments (upwards of 1,179MB/s in sequential reads). The DS1817+ can store a maximum of 80TB in storage on a single system using eight 10TB drives, which can be upped to a massive total of 180TB via expansion units. This scalable solution also features four 1GbE LAN ports.

The Synology DiskStation DS1817+ is another comprehensive 8-bay NAS system from Synology designed to centralize storage for small growing businesses. At the center of the DS1817+ is a Quad-core 2.4GHz CPU with an AES-NI hardware encryption engine and up to 16GB in dual-channel DDR RAM, components that should allow the NAS solution to work well in most demanding environments (upwards of 1,179MB/s in sequential reads). The DS1817+ can store a maximum of 80TB in storage on a single system using eight 10TB drives, which can be upped to a massive total of 180TB via expansion units. This scalable solution also features four 1GbE LAN ports. 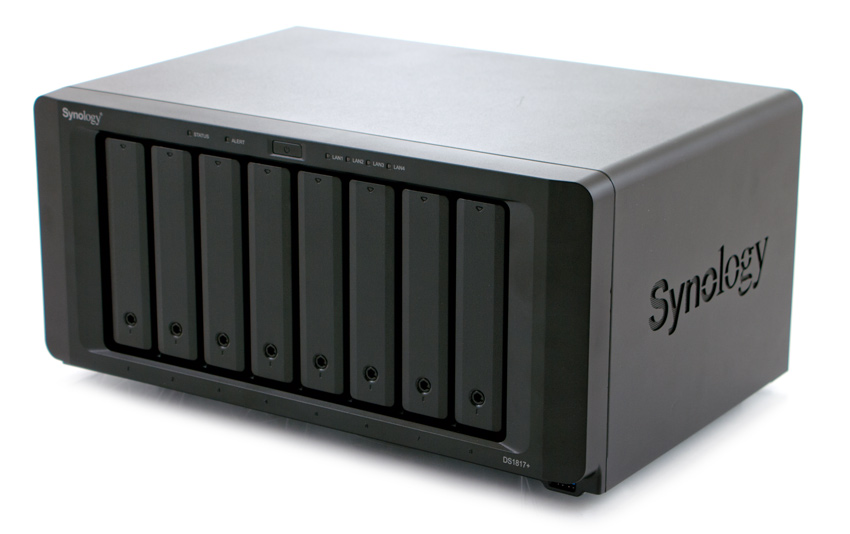 The most versatile feature of the Synology DiskStation DS1817+ is its PCIe Gen2 x8 slot (x4 link), giving users the option to install the company’s dual M.2 SSD adapter card (M2D17) for high-IOPS system cache and increased overall performance of the NAS. Users can also install a 10GbE NIC in the PCIe slot for mucher higher data transfers.

Like all Synology NAS solutions, the DS1817+ is managed by DiskStation Manager (DSM), which is currently in version 6.1. DSM is a powerful and comprehensive operating system that features tons of ways to easily manage your DiskStation. This includes File Station, a user-friendly file management tool with seamless drag-and-drop operation and advanced search and filtering tools; Surveillance Station, a web-based application that manages IP cameras; and Cloud Station Server, a comprehensive way to sync data from multiple platforms on your Synology NAS.

The Synology DiskStation DS1817+ is backed by a 3-year warranty and goes for roughly $950 and $850 for the diskless 8GB RAM and 2GB RAM models, respectively.

The DiskStation DS1817+ has a very similar design as the DS1517+ with its matt-black plastic enclosure. Each of the 8 drive-bays has a drive lock and status indicator and can be easily accessed by pressing the lower part of the tray and pulling the handle towards you. Along the top of the DS1817+ are the Status and Alert indicators, which gives information about the status of the NAS and warnings related to fan or temperature, respectively. To the right is the power button and the LAN indicator, the latter which displays the status of the network connection. TheUSB 3.0 port is located at the bottom right of the front panel, giving users the ability to connect external devices such as hard drives, USB printers, and more. 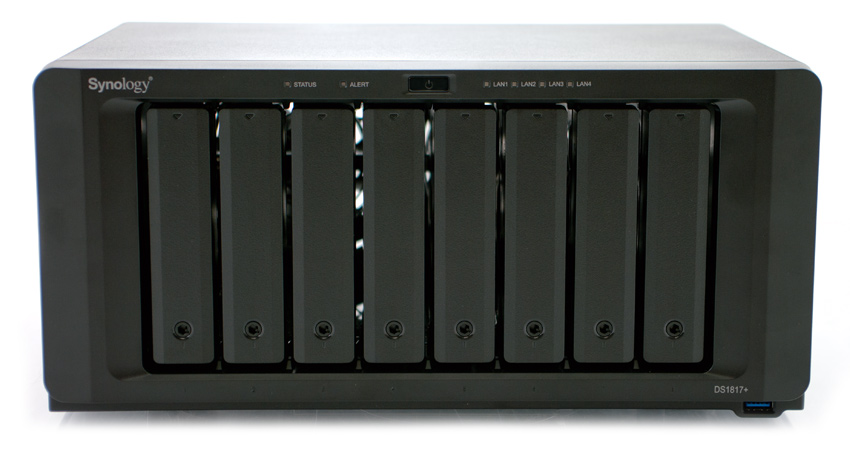 On the sides of the DS1817+ is the Synology logo, which is also used as ventilation. RAM is accessed through the bottom of the NAS. Simply remove the four screws to open up the bottom panel.

Turning the NAS around reveals the dual fans, which take up the most of the back panel; if one the fan malfunctions, a loud beeping sound will be emitted. To the right of the system fans is the PCIe expansion and the left is the power port. Simply remove the single screw and pull open the cover to access the PCIe slot. Note that the DS1817+ only supports the M.2 SATA SSD interface when using the M2D17; M.2 NVMe/AHCI PCIe SSD is not supported. 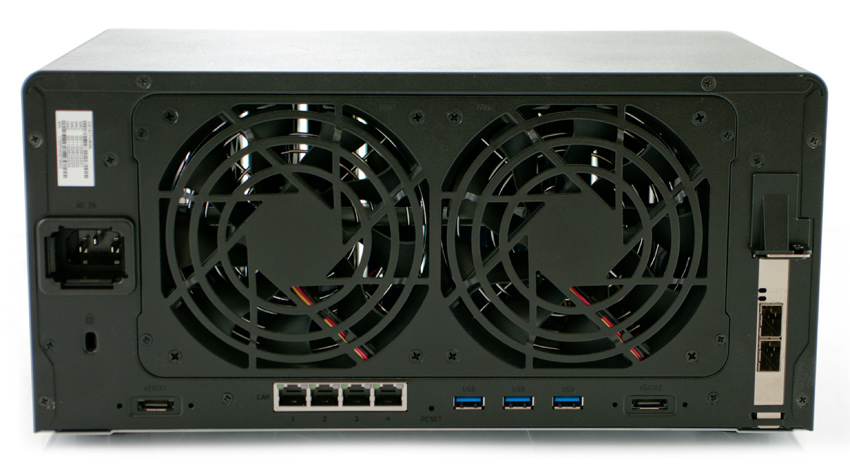 Along the bottom of the back panel is the Kensington Security Slot, the first eSATA port, four LAN ports, the reset button, three USB 3.0 ports, and the second eSATA port.

The DS1817+ offers a single PCIe expansion slot for an M.2 SSD card as well as networking add-on cars. While we have concerns over the amount of airflow the slot provides, Synology states that in their testing, cards are able to operate within their normal operating temperature ranges. 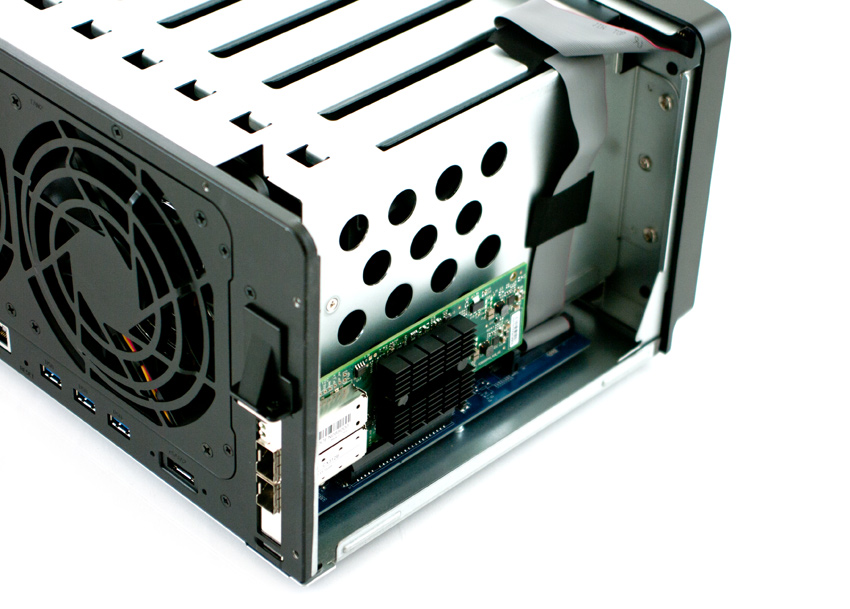 As mentioned above, the DS1817+ uses Synology’s popular DSM operating system. The OS has more than enough functions for users ranging from SOHO to SME, such as various RAID selection in data protection. 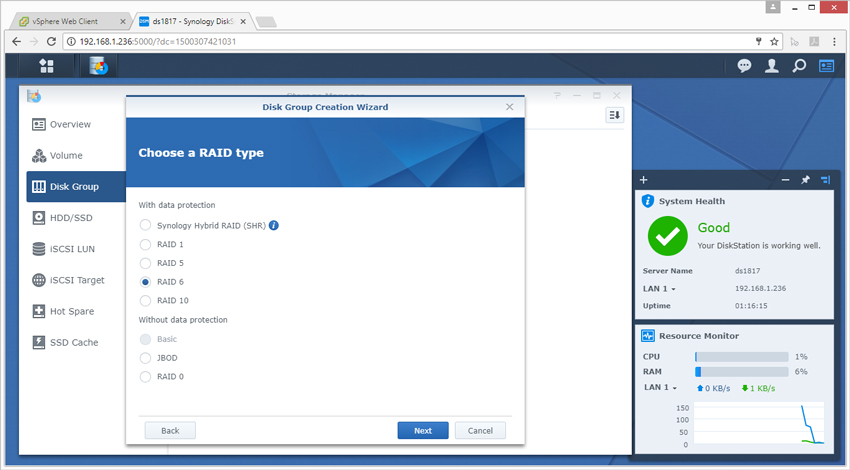 Next, we looked at average latency of the new Synology NAS where VMs ranged from 1,881ms to 1,758ms (RAID6) while aggregate performance scored 1,819.5ms.

In the first of our enterprise workloads, we measured a long sample of random 4k performance with 100% write and 100% read activity to get our main results. When populated with the Toshiba HK3R2 SSD iSCSI (RAID6), the DS1817+ had its top performance in iSCSI with 34,940 IOPS read and 10,923 IOPS write. In an HDD configuration, the Synology NAS posted its best performance with 2,271 IOPS (iSCSI) and 1,188 IOPS (CIFS) in reads and writes, respectively.

When looking average latency using a heavy 16T/16Q load the DS1817+ recorded its best read performance with the HK3R2 SSDs configured in iSCSI (7.33ms) while CIFS had the Synology’s best write score (19.81ms).

When looking at the max latency, the DS1817+ had leading performance when populated with the Toshiba HK3R2 SSDs in an iSCSI block-level configuration, posting 46.0ms read. Its best write performance was under CIFS SSD configuration, which had 131.9ms.

The last part of our series of 4K benchmarks looks at latency consistency via standard deviation. In this scenario, the DS1817+ had a leading 11.41ms in reads when configured with Toshiba HK3R2 SSDs (iSCSI block-level).

Compared to the fixed 16 thread, 16 queue max workload we performed in the 100% 4k write test, our mixed workload profiles scale the performance across a wide range of thread/queue combinations. In these tests, we span workload intensity from 2 threads and 2 queues up to 16 threads and 16 queues. From the charts below, the best DS1817+ configuration was by far the iSCSI block-level set up, which reached just under 18,700 IOPS by the end of the test. 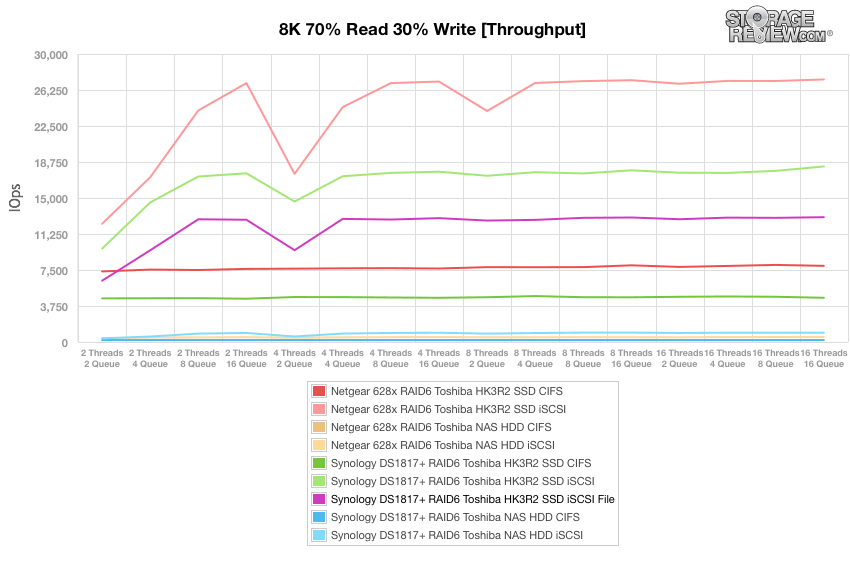 When looking at 8k 70/30 average response times, the iSCSI block-level SSD configuration recorded the best performance for Synology’s DS1817+, which had a range of 0.4ms to 13.99ms. 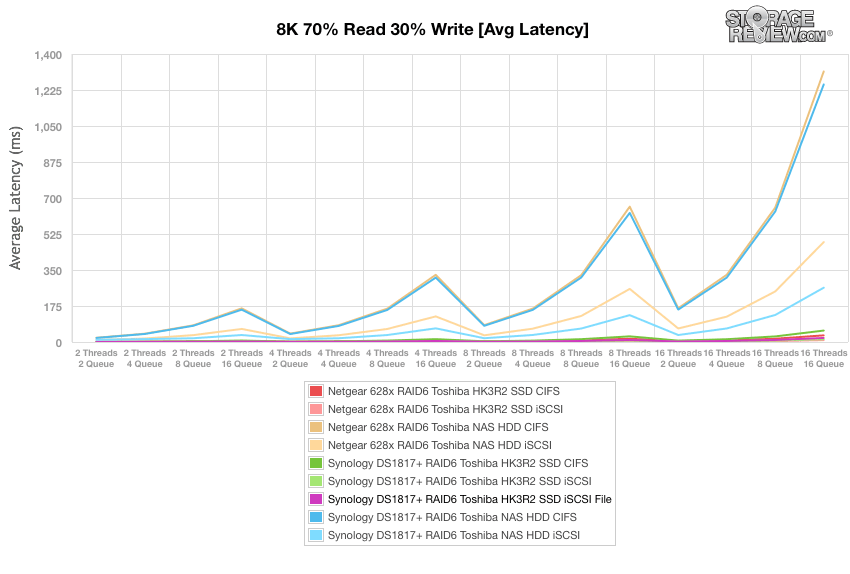 Our max latency numbers showed similar results between both block- and file-level storage configurations when using SSDs whereas the HDD configurations were much more uneven. Here, the DS1817+ showed its best (and leading) performance under the CIFS SSD configuration with a range of 53.26ms to 168.7ms. 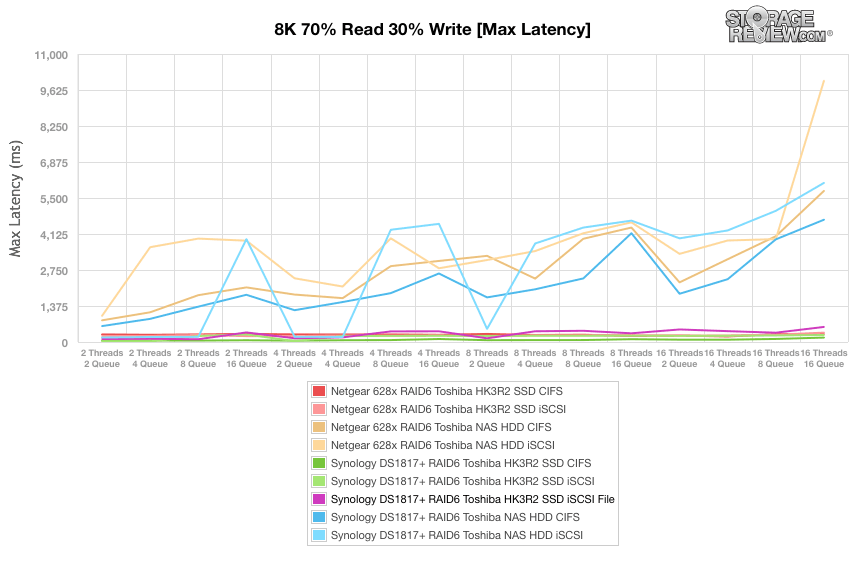 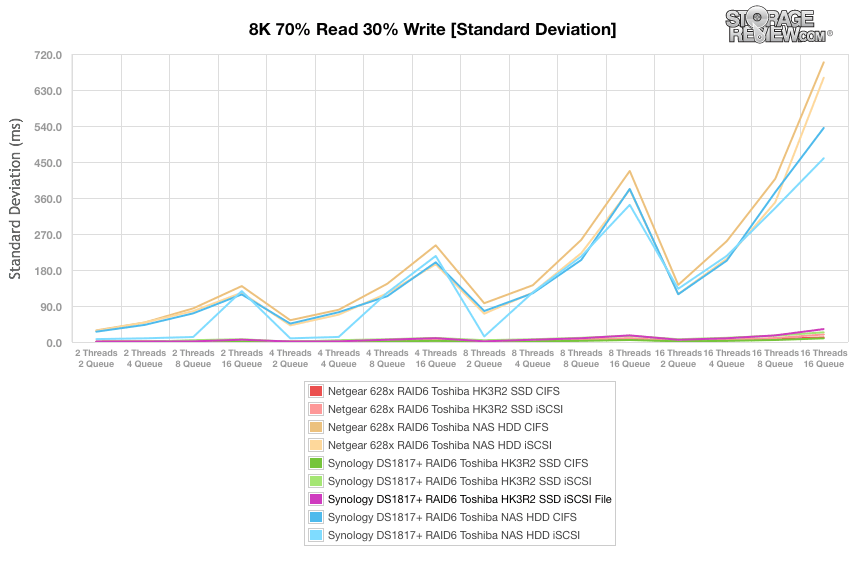 The last Enterprise Synthetic Workload benchmark is our 128K test, which is a large block sequential test that shows the highest sequential transfer speed for a device. In this workload scenario, the clear winner was the Netgear 628x, which had 2.3GB/s read (CIFS) and 1,76GB/s write (iSCSI) via the Toshiba SSDs. The DS1817+ showed it best read performance configured in block-level iSCSI with 948MB/s while writes hit 532MB/s in file-level iSCSI.

The Synology DiskStation DS1817+ is powered by a Quad-core 2.4GHz CPU with an AES-NI hardware encryption engine and up to 16GB in dual-channel DDR RAM. This scalable NAS solution offers up to 80TB in storage on a single system (8 x 10TB drives), which can be expanded to a healthy 180TB via expansion units. That said, the DS1817+ is somewhat of a mixed bag overall–something you don’t hear very often when we review a Synology product; performance lacked in several areas where it should have excelled, which certainly due to the design flaw where the add-on card slot is poorly ventilated, thus leading to overheating and sluggish performance. Because the PCIe slot is a huge selling point for the newer Synology NAS solutions, this makes for a significant issue.

Diving into performance details, the Synology DiskStation DS1817+ shows its best results when configured in block-level iSCSI connectivity using Toshiba HK3R2 SSDs; specifically for reads. For example, it posted 34,940 IOPS read and 10,923 IOPS write compared to 7,526 IOPS read and 12,918 IOPS write in CIFS during our long sample of random 4k (with 100% write and 100% read activity) benchmark. In the HDD configurations, the Synology NAS posted its best performance with 2,271 IOPS (in iSCSI) and 1,188 IOPS (in CIFS) in reads and writes, respectively. During our 8K sequential throughput tests, the DS1817+ recorded its best performance during our file-level iSCSI configuration with 44,405 IOPS read and 39,119 IOPS write; however, the Netgear 628x had significantly better results, with an impressive 221,393 IOPS and 153,330 IOPS for reads and writes, respectively.

When looking at the results of our mixed workload profiles, as the Synology DiskStation DS1517+ SSD iSCSI (block-level, RAID6) configuration handily beat the file-level iSCSI and CIFS performance; however, the Netgear 628x NAS posted much better performance. In our last Enterprise Synthetic Workload benchmark, we put the Synology NAS  through the large block sequential test that shows the highest sequential transfer speed for a device.The DS1817+ showed it best read performance in a block-level iSCSI configuration with 948MB/s, while writes hit just 532MB/s in file-level iSCSI. Again, the Netgear 628x was far and beyond the best performer, with a massive 2.3GB/s read (CIFS) and 1,76GB/s write (iSCSI) with the Toshiba SSDs.

Though excelling in some of our workloads, the overall lack of performance due to a significant design flaw is hard to ignore making the DS1817+ a rare disappointing release by Synology.