The DS1817 is powered by a Quad-core 1.7GHz CPU (Annapurna Labs Alpine AL-314) and features up to 8GB of DDR3L RAM (4GB standard). With this hardware, the 8-bay Synology NAS is quoted to deliver a maximum of 1,577MB/s in sequential reads, which is roughly 400MB/s faster than the plus model.

Like all Synology NAS solutions, the DS1817 is managed by the comprehensive DSM operating system. Users will be able to take advantage of software like the Cloud Station Suite, which offers real-time data synchronization across all devices (including other Synology NAS solutions) when editing or adding files. Synology uses "intelliversioning" to ensure that the most important file versions are used, which helps to optimize storage space. Users will also be able to leverage the web-based, fast and secure management tool File Station, which features easy, drag-and-drop operation and without any complicated setup process. In addition, its advanced search and filtering capabilities mean more efficient organization and sharing of files.

Available as a diskless model for roughly $840, the DS1817 is covered by an 3-year limited warranty.

At first glance, the DS1817 looks identical to the plus version with the usual matt-black plastic enclosure; however, there are small differences. Unlike the plus model, the DS1817 does not have a USB port on the front panel and it has a noticeably smaller bezel underneath the 8 drive bays. Along the top are the LED lights, which surround the power button. This includes the Status and Alert indicators, which gives information about the status of the NAS and warnings related to fan or temperature, respectively, and the LAN indicators, which display the status of the network connection. Each drive-bay has an individual drive lock and status indicator. You can access drives by pressing the lower part of the tray and pulling out the handle.

Like all Synology devices of this class, the Synology logo on the sides of the device act as ventilation. RAM is accessed through the bottom of the NAS. Simply remove the four screws to open up the bottom panel.

Turning the NAS around will reveal the dual fans (4.72” x 4.72”); if one of then malfunctions, a loud beeping noise will sound.  Located at the bottom left are the power port, two USB 3.0 ports, and the Kensington Security Slot, while an eSATA port are located on either side of the DS1817.On the right are two 10GbE RJ-45 ports, two 1GbE RJ-45 ports and a reset button.

The Synology DS1817 will be compared two other 8-bay NAS units, including the Synology DS1817+ and the NETGEAR 628X. We tested the DS1817 in RAID6 and used both SSDs and HDDs in both iSCSI and CIFS configurations.

The drives used for this review were:

This test uses SQL Server 2014 running on Windows Server 2012 R2 guest VMs, being stressed by Dell's Benchmark Factory for Databases. While our traditional usage of this benchmark has been to test large 3,000-scale databases on local or shared storage, in this iteration we focus on running out four 1,500-scale databases on the NAS over iSCSI.

When looking at SQL Server Output, we tested two SQL VMs each with a 15,000VU load applied. This gave us individual TPS scores ranging from 720.455 to 701.445 in RAID6, while aggregate results came in at 1421.9 TPS. These results were significantly less than the plus model as well as the Netgear 628x. 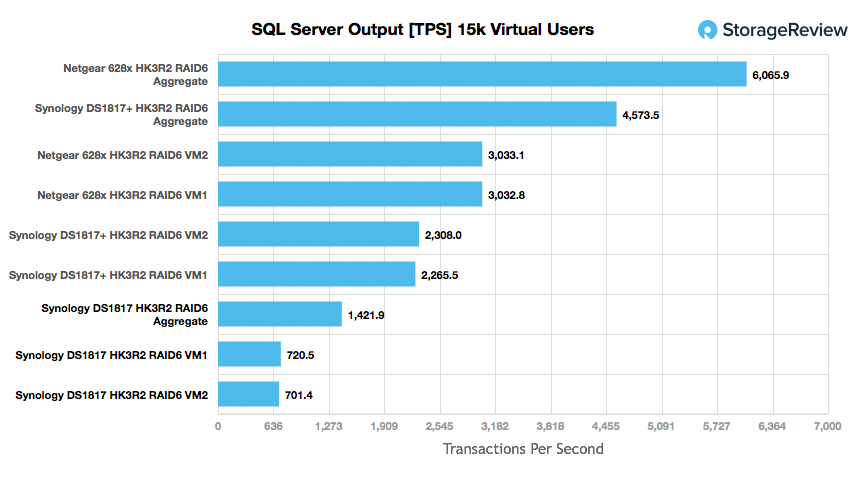 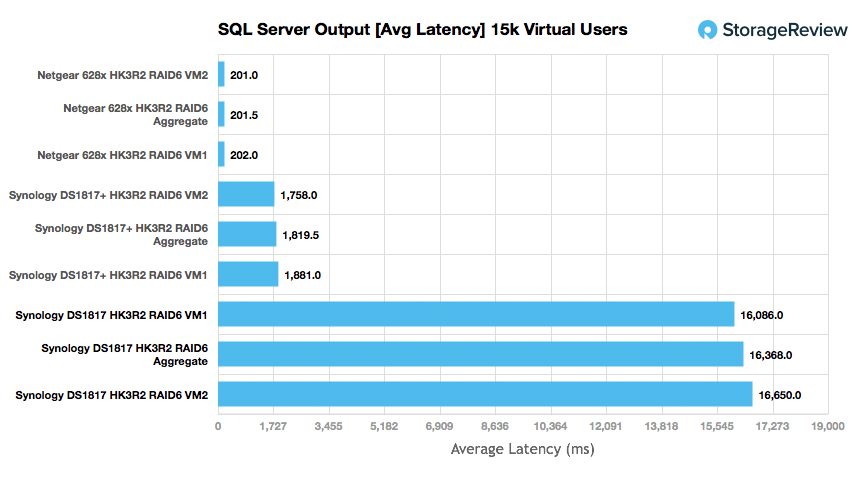 During our sysbench tests, we looked at the DS1817 configured in RAID6 using 4 VMs only where it fell behind again with a TPS score of 724. In comparison, the Netgear 628x and the plus model measured 1,411 TPS and 752.85 TPS, respectively.

In the first of our enterprise workloads, we measured a long sample of random 4k performance with 100% write and 100% read activity to get our main results. Equipped with Toshiba HK3R2 SSDs in RAID6, the DS1817 showed its best performance in iSCSI with a very solid 43,645 IOPS read (though it had an underwhelming 1,705 IOPS in write). In our HDD configuration, it showed 2,900 IOPS and 401 IOPS (iSCSI) in reads and writes, respectively. For the plus model, we saw much slower SSD read performance with 34,940 IOPS read, though it had much fast write activity with 10,923 IOPS (iSCSI).

When looking average latency using a heavy 16T/16Q load the DS1817 recorded its best read performance when configured in iSCSI with 5.864ms, while CIFS had the best write score with 147.41ms.

The last part of our series of 4K benchmarks looks at latency consistency via standard deviation. In this scenario, the DS1817 had a leading 7.226ms in reads via the RAID6 Toshiba HK3R2 SSD configuration (iSCSI block-level).

Compared to the fixed 16 thread, 16 queue max workload we performed in the 100% 4k write test, our mixed workload profiles scale the performance across a wide range of thread/queue combinations. In these tests, we span workload intensity from 2 threads and 2 queues up to 16 threads and 16 queues. The best DS1817 configuration was the iSCSI block-level setup, though it only measured 2,820 IOPS by the end of the test. 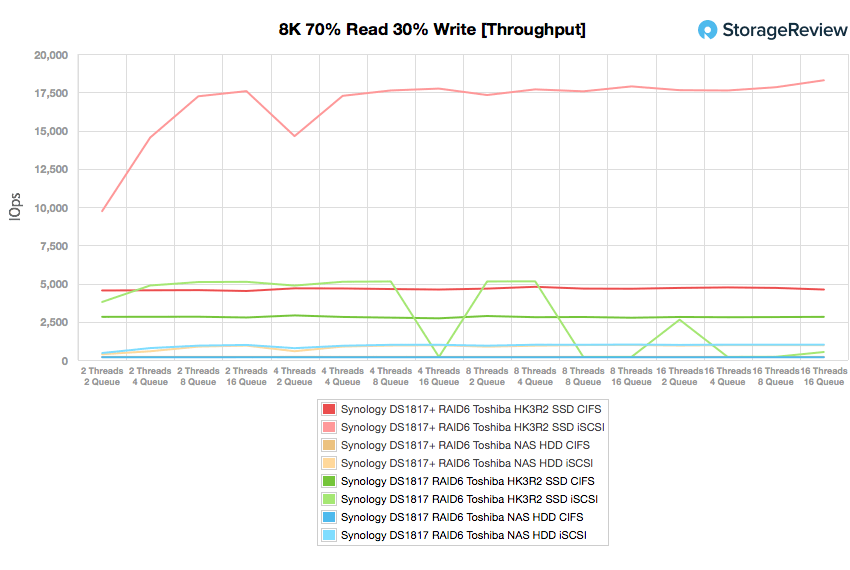 When looking at 8k 70/30 average response times, the CIFS file-level SSD configuration recorded a range of 1.41ms to 90.74ms. 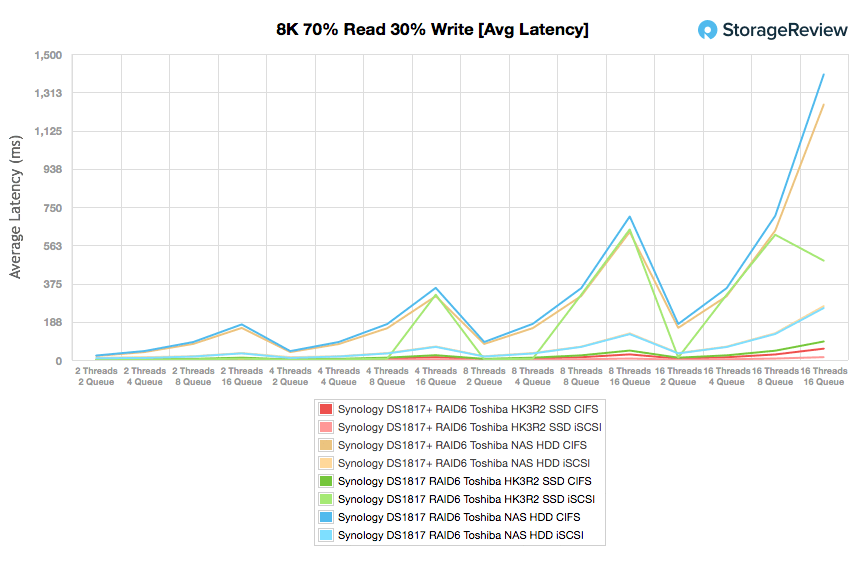 Our max latency numbers showed its best results (by far) during our file-level storage configurations when using SSDs. Here, the DS1817 showed a range of 113.25ms to 393.71ms. This was still well behind the plus model CIFS/SSD configuration. 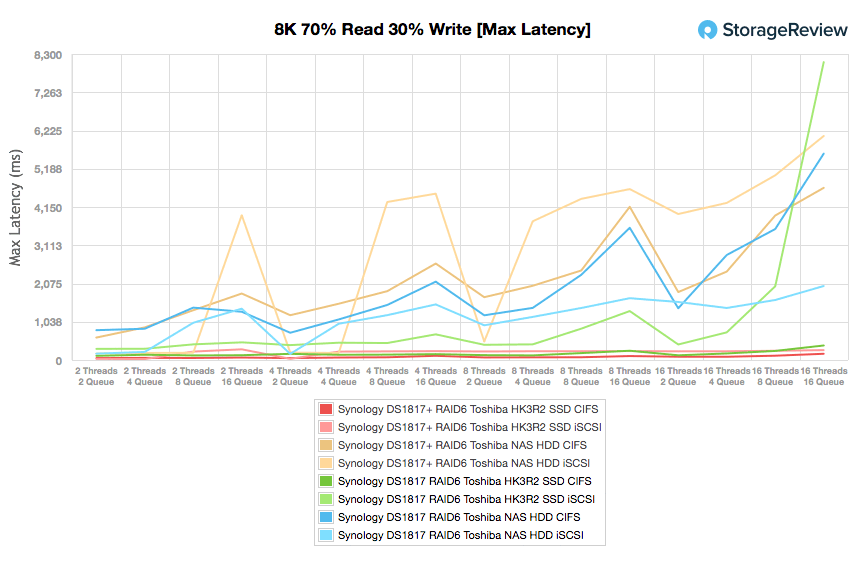 Standard deviation was more or less the same, as the RAID6 CIFS SSD configuration recorded its best performance (1.85ms to 35.3ms). 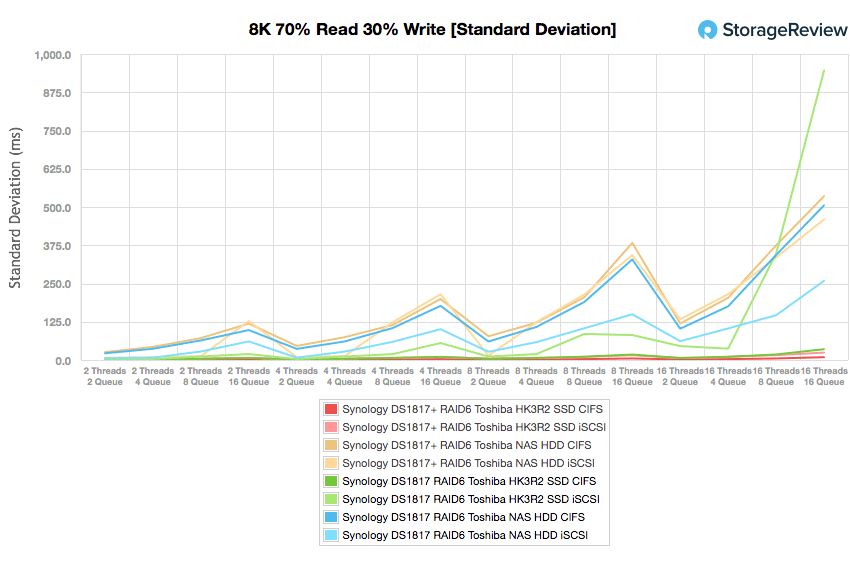 The last Enterprise Synthetic Workload benchmark is our 128K test, which is a large block sequential test that shows the highest sequential transfer speed for a device. In this workload scenario, the clear winner was the DS1817, which posted an impressive 1.24GB/s read and 758MB/s write under the Toshiba HK3R2 SSD CIFS configuration.

Unfortunately, the DS1817 is an underwhelming release from Synology. This is certainly a surprising trend that's been following the company's SMB solutions like the previously reviewed DS1817+, which also took a hit on performance compared to competing models. On the positive side, the DS1817 has a lot to offer, much of which comes standard with the feature-rish DSM OS. Synology has grown the DSM environment into one of the nicest looking in the market, making it very easy to use and set up. On the hardware side, the DS1817 offers on-board 10GbE connectivity via two 10Gbase-T ports, whereas the DS1817+ supports 10G only through an add-on card, which is optional. The main difference though between these two models is the CPU and chipset; the DS1817+ leverages a standard Intel line, whereas the DS1817 uses one from Annapurna Labs. This allows it to offer quite a few on-board hardware elements such as the faster networking interfaces, but performance takes a huge hit.

In our application tests, the DS1817 falls down quickly from the DS1817+ in our SQL Server test. It offers a fraction of the performance of either the DS1817+ or the Netgear 628x, and latency instead of being measured in milliseconds is measured in seconds. In our MySQL Sysbench test the DS1817 matched the pace of the DS1817+, although both units came in well below the Netgear. In our synthetic workloads, the DS1817 was all over the map. There were a few select benchmarks such as 4K random read or 128K sequential transfers where it out-paced the DS1817+, but in other areas it fell nearly flat. iSCSI performance seemed to be the hardest hit, where we saw sequential speeds measure as low as 26MB/s read and 204MB/s write with a RAID6 SSD disk group backing it. Our 8k mixed workload performance over iSCSI showed an interesting picture, where the DS1817 started off near or above 4000 IOPS, but as the load increased it slowed to as low as 199 IOPs. Compared to the DS1817+ which measured as high as 18,000 IOPS in the same test, this is a massive problem for this unit deployed in heavy-workload environments.

Though it has a wonderful interface and performed well enough in a select few of our benchmarks, the DS1817 is an uneven release by Synology in terms of performance. Ultimately we expect more from Synology, especially at this price point.