The Synology DS215+ is a 2-bay NAS that provides high performance when multitasking with applications while boasting excellent energy efficiency and a plethora of business features. Released as a successor to the DS214+ line, the Synology NAS has a maximum of 16TB in raw storage capacity and is ideal for small and medium businesses looking to centralize their backup process, protect their most important content, and efficiently share their files.

The Synology DS215+ is a 2-bay NAS that provides high performance when multitasking with applications while boasting excellent energy efficiency and a plethora of business features. Released as a successor to the DS214+ line, the Synology NAS has a maximum of 16TB in raw storage capacity and is ideal for small and medium businesses looking to centralize their backup process, protect their most important content, and efficiently share their files. 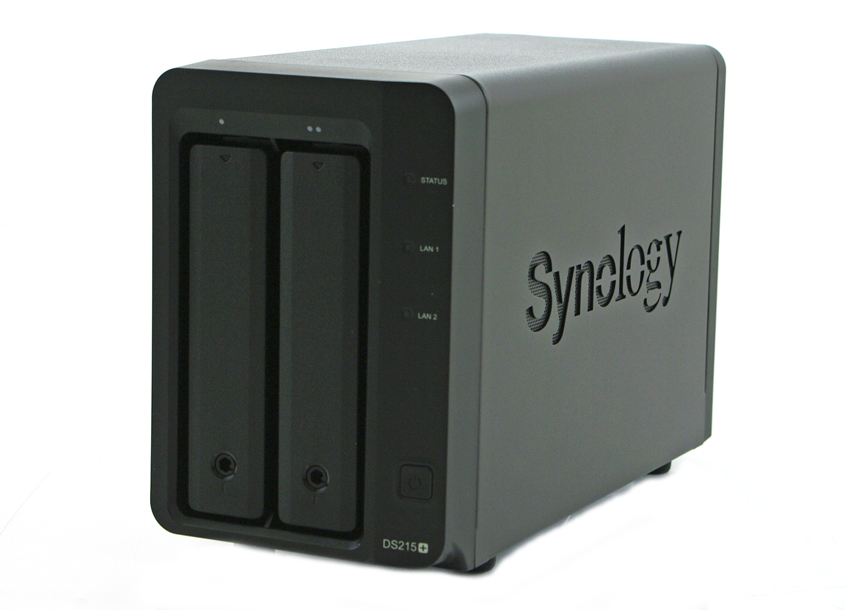 Looking at its performance, Synology quotes the DS215+ with capabilities over 209MB/s in reads and 139MB/s in writes when configured in a RAID1 Windows environment, indicating that the DiskStation is able to boast these speeds due to its Annapurna Labs Alpine AL-212 1.4 GHz dual-core CPU and link aggregation. The DS215+ also comes equipped with 1GB DDR3 RAM to allow for substantial multitasking with only slight performance degradation. Additionally, the Synology NAS also has an encryption engine with the ability to divert the encryption calculation tasks from the main CPU. As a result, this allows the CPU to be available for more important tasks adding to its performance. As such, Synology indicates that it has double the encrypted data transmission speeds compared to its predecessor with 145MB/s reads and 71MB/s writes.

Like all Synology devices, the DS215+ is equipped with a ton of useful features and functionality including its two Gigabit LAN ports for failover and link aggregation support. This helps to ensure that a business’ networks stays online in the event of a LAN connection failure. The DS215+ also supports Adaptive Load Balancing, active-standby, 802.3ad dynamic, and Balanced XOR. The DS215+ also uses the incomparable DiskStation Manager (currently in version 5.2) operating system, which provides the NAS with vast private cloud features and business applications, and intuitive data management functionality. We’ve reviewed the operating system numerous times during our DiskStation review, so take a look at our Synology Hub for further details.

The Synology DS215+ goes for roughly $399 dollars (diskless) inclusive of a 2-year warranty. We will be populating it with both WD Red and Seagate NAS drives in our performance review.

Not only has Synology been consistent with performance and quality, it has been pretty consistent when it comes to the look and feel of their DiskStations as well. Each recent iteration only has minor differences. The DS215+ is comprised of a plastic enclosure with a matt black finish. The Synology branding on the sides of the DiskStation intelligently work as supplemental ventilation. Additionally, like all Synology devices, the DS215+ feels very rugged and secure with its rubber feet. 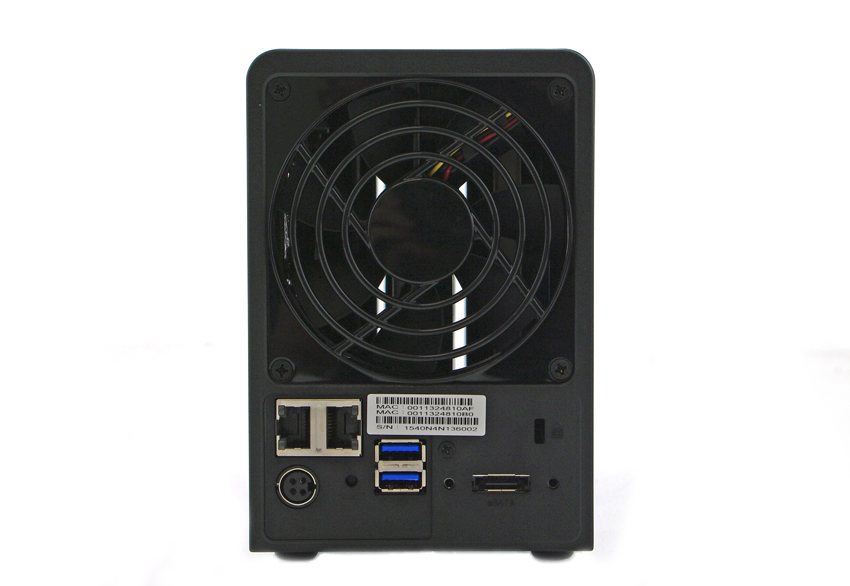 Looking at the back panel shows the ventilation of the device fan, which rids the DiskStation of excess heat to keep the system cool and running smoothly. In the event of a malfunction from the fan, the DS215+ will emit a beeping sound. Located at the bottom are the two Gigabit LAN ports for failover and Link Aggregation support, two USB 3.0 ports, and eSATA and power ports. In addition, the Reset button and Kensington Secure lock are also located on the back panel.

We tested both CIFS and iSCSI performance using RAID1 configurations of two popular 3.5" 5,400RPM hard drives: the WD Red and Seagate NAS HDDs. Both of the drives are suited to operate in NAS environments.

In order to fairly evaluate the performance of the Synology DiskStation DS215+, we need an environment that ensures that it is the I/O bottleneck rather than the network. Therefore this review employs a Lenovo ThinkServer RD240 running multiple Windows Server 2012 VMs in an ESXi 5.1 environment connected via a quad-port Intel i350-T4 NIC through a Netgear ProSafe GS752TXS switch.

In the first of our enterprise workloads, we measured a long sample of random 4k performance with 100% write and 100% read activity to get our main results. In read activity, the Synology DS215+ Seagate NAS 4TB iSCSI posted the best results with 425 IOPS while the DS215+ WD Red 6TB (CIFS) boasted the highest throughput in write activity by a noticeable margin with 459 IOPS. It certainly seems that iSCSI is best suited for read functions, which is unsurprising. You will also notice that will generally be the case for the rest of the 4k performance benchmarks.

In the average latency segment with a load of 16T/16Q, the DS215+ populated with WD Red 6TB drives (CIFS) once again had the best read results with a latency of 600.94ms; the only configuration that was close was the DS715 using Seagate NAS drive in iSCSI, which posted read latency of 621.685ms. In writes, the DS215+ Seagate NAS 4TB RAID1 iSCSI had the lowest response time with just 561.159ms.

Measuring max latency, the Synology DS215+ (iSCSI) populated with 4TB Seagate NAS drives lead in a max read response time with 2,040ms while the top writes was achieved by the DS715 WD Red 6TB iSCSI configuration with a response time of 4,102.1ms.

Reviewing the 4K latency consistency in our standard deviation section, showed the DS215+ on top of the leaderboards once again in read activity, with 343.87ms, which was achieved using Seagate NAS drives configured in iSCSI. In writes, the top performer here by a noticeable margin was the DS715 using WD Red drive (iSCSI) with 663.46ms.

Our next benchmark looks at 100% 8K sequential throughput using a 16T/16Q load in 100% read and 100% write operations. The Synology DS715 WD Red 6TB CIFS configuration boasted the highest throughput in read activity with 25,692 IOPS with DS215+ Seagate NAS 4TB RAID1 using CIFS connectivity hot on its trail (25,084 IOPS). In write activity, the best configuration was the Synology DS715 Seagate NAS 4TB RAID1 CIFS, boasting 16,120 IOPS. It's quite clear from the chart below that the DiskStations configured using the CIFS protocol boasted significantly better results in both read and write output.

Compared to the fixed 16 thread, 16 queue max workload we performed in the 100% 4k write test, our mixed workload profiles scale the performance across a wide range of thread/queue combinations. In this scenario, we span workload intensity from 2 threads and 2 queue up to 16 threads and 16 queue. In the expanded 8k 70/30 test, the Synology DS215+ Seagate NAS 4TB configured in iSCSI offered the greatest throughput during the entire test with the exception of the initial burst. 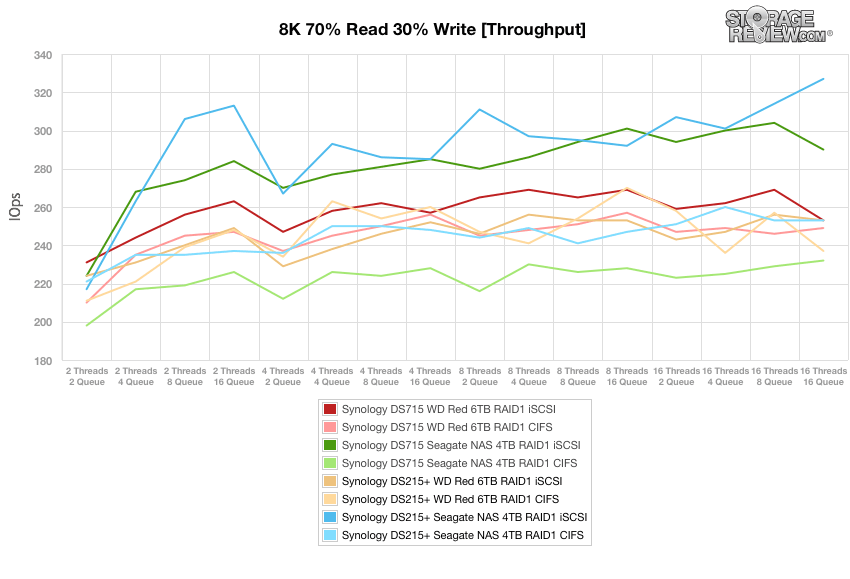 With the 8k 70/30 average response times, all configurations were very close to one another in performance during the first half of the test; however, the Synology DS215+ populated with the Seagate NAS 4TB in iSCSI edged out the rest by the terminal with the lowest peak overall average latency of 779.73ms. The next best configuration was the Synology DS715 Seagate NAS 4TB iSCSI at 880.59ms. 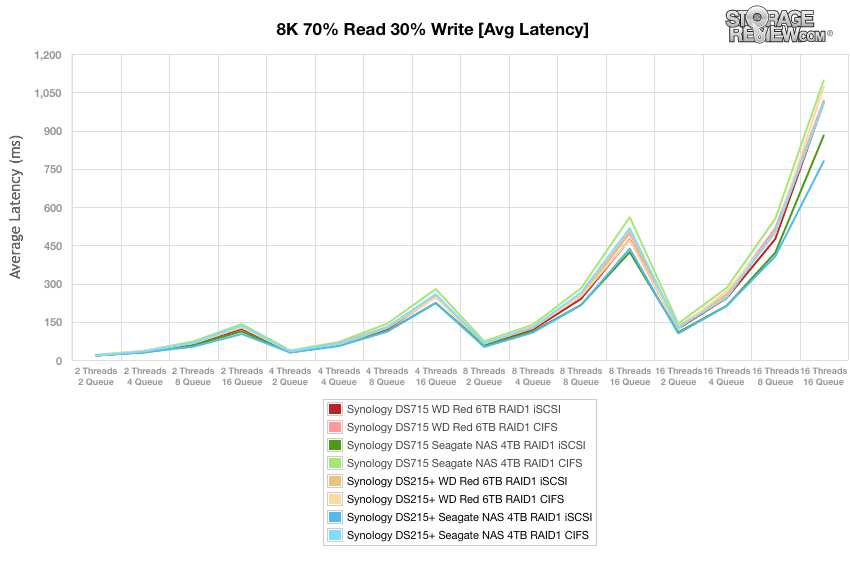 During our primary tests at varying thread and queue depth levels, max latency of our tested DiskStations showed very inconsistent results when configured with block-level CIFS. That said, iSCSI configurations were much more stable, with the Synology DS215+ Seagate NAS 4TB iSCSI boasting the lowest max latency at 4,715.89ms. The Synology DS715, also with the Seagate NAS 4TBs using iSCSI, had the next lowest maximum reading posting 5,041.97ms. 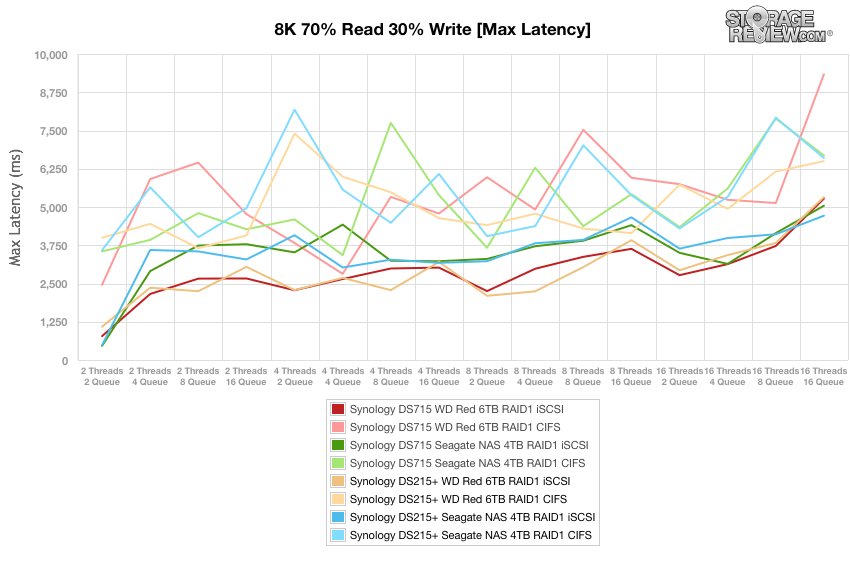 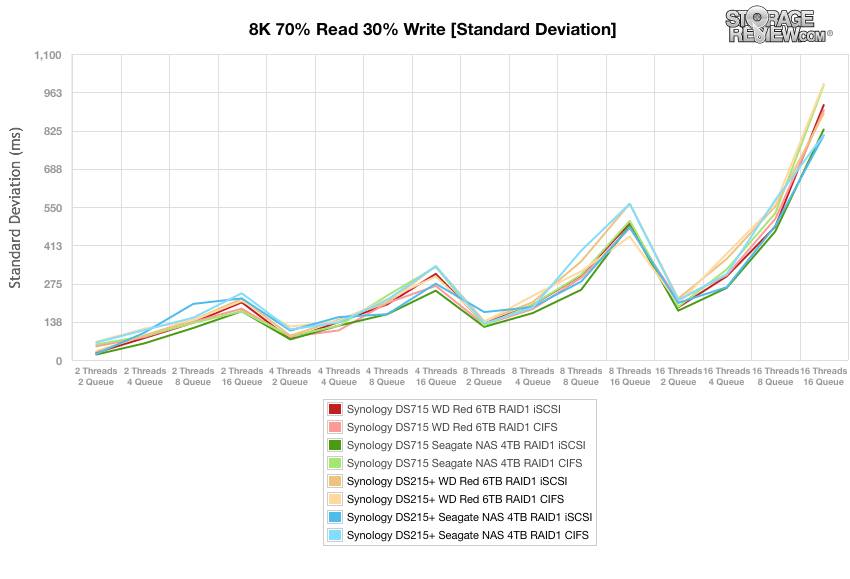 In our final synthetic benchmark, we use a much larger transfer size (128k) with 100% read and 100% write operations. Read performance remained fairly consistent across all configurations and drives, with all of them surpassing the 200,000 IOPS mark. In write performance, however, both the Synology DS215+ and DS715 using the Seagate NAS 4TBs drive performed well under the rest of the configurations during our iSCSI file-level tests.

Synology’s DS215+ is certainly a worthy addition to the plus line of network attached storage due to both its flexibility and performance. Categorized as an SMB NAS, the 2-bay NAS boasts solid performance and a powerful DSM operating system making it an ideal candidate for businesses looking to streamline and centralize their backup process as well as to protect and share their important data. Under the hood lays the Annapurna Labs Alpine AL-212 1.4 GHz dual-core CPU and 1GB DDR3 RAM, which allows the NAS to perform significant multitasking with minimal performance degradation.

In terms of its performance during our enterprise benchmarks, we pitted it against the DS715. Though identical in appearance, the DS715 is equipped with better hardware including a Quad Core 1.4 GHz CPU and 2GB of DDR3 RAM; however, the DS215+ proved the be a serious contender. In our with 100% write and 100% read activity enterprise workload, the DS215+ was the top performer in the read column for both throughput and latency. Here, the iSCSI configuration was certainly the best protocol to use for the best possible performance out of the DiskStations. Results told a similar story in the expanded 8k 70/30 workloads, as it continued its great performance highlighted by its 325+ IOPS in throughput.

Retailing at just under $400, the DS215+ is reasonably priced and thus would certainly be a viable option for smaller businesses on a budget. The 2-bay Synology NAS certainly has a lot to offer and its compact design would make a nice addition to any workstation area.

The Synology DS215+ is an ideal NAS solution for small-to-medium sized businesses or workgroups looking for performance and flexibility at a reasonable price point.