Synology's newest 2-bay quad-core NAS is meant to serve growing businesses that expect their storage needs to increase, but want to minimize their initial investment. Unlike many of their other 2-bay offerings, the DS715 can be daisy-chained with a DX513 expansion unit, total raw capacity from 16TB to 56TB. The DS715 also provides impressive performance, with reported transfer speeds of 216.1MB/s read and 142.5MB/s write (RAID1), as well as 2GB of memory. In addition to its standout scalability, the DS715 carries with it all of Synology's other DiskStation features and their popular DSM.

Synology's newest 2-bay quad-core NAS is meant to serve growing businesses that expect their storage needs to increase, but want to minimize their initial investment. Unlike many of their other 2-bay offerings, the DS715 can be daisy-chained with a DX513 expansion unit, total raw capacity from 16TB to 56TB. The DS715 also provides impressive performance, with reported transfer speeds of 216.1MB/s read and 142.5MB/s write (RAID1), as well as 2GB of memory. In addition to its standout scalability, the DS715 carries with it all of Synology's other DiskStation features and their popular DSM. 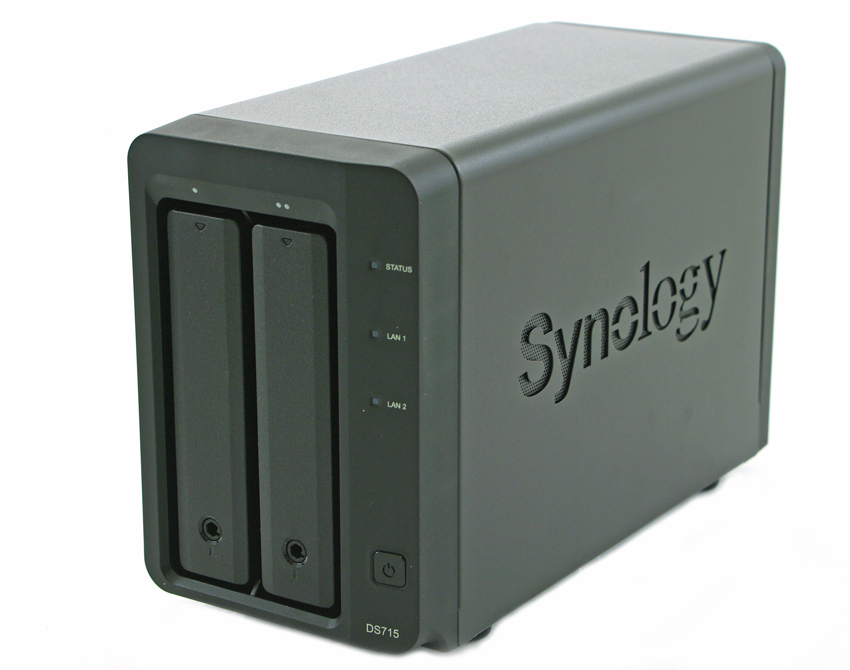 Thanks to its hardware encryption engine, files stored on the DS715 can be encrypted on the fly with only a very small drop in performance (205.6MB/s read and 77.62MB/s write). The device comes with dual LAN, which offers redundancy as well as enhanced connection speeds. Thanks to Surveillance Station, the DS715 can be used as an NVR server supporting up to 30 cameras, with real-time or recorded viewing either with a computer or mobile device. Other programs like User Home, Storage Manager, and Synology CMS make the DS715 well equipped to serve a small business.

In terms of backup, the DS715 can be set as a backup target through Cloud Station, and the contents of the DS715 can be backed up to other DiskStations, external drives, or various third-party cloud services (e.g., Amazon S3, Glacier, Microsoft Azure). The DS715 also functions as an all-in-one server through Directory Server, Proxy Server, Web Station, Mail Station, and Print Server. In the event of downtime, Synology's Heartbeat function will automatically detect interruptions and activate passive servers (if passive servers have been designated).

The DS715 resembles most of Synology's other DiskStation models. Drives can be accessed from the face of the device, which also uses LED displays to indicate drive activity, system status, LAN 1 and LAN 2 connectivity, and system power.

The sides are plain black with Synology's typical branding, and the bottom has four textured pegs to hold the device in place. 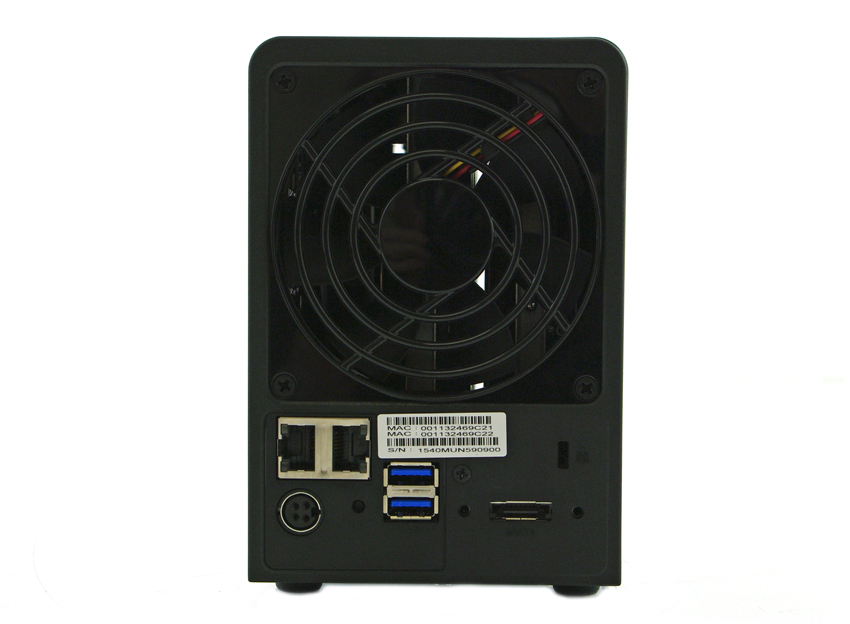 The back of the DS715 has one large fan, two LAN ports, the power port, a reset button, two USB 3.0 ports, an eSATA port, and a Kensington lock slot.

We tested both CIFS and iSCSI performance using two popular 3.5" 5,400RPM hard drives: the 6TB WD Red and 4TB Seagate NAS models. Both of the drives are suited to operate in NAS environments.

In order to fairly evaluate the performance of the Synology DiskStation DS715 we need an environment that ensures that it is the I/O bottleneck rather than the network. Therefore this review employs a Lenovo ThinkServer RD240 running multiple Windows Server 2012 VMs in an ESXi 5.1 environment connected via a quad-port Intel i350-T4 NIC through a Netgear ProSafe GS752TXS switch.

In the first of our enterprise workloads, we measured a long sample of random 4k performance with 100% write and 100% read activity to get our main results. The DS715 performed well overall, posting mostly average numbers in all configurations. The DS715 with Seagate drives (iSCSI) had a higher read performance (411 IOPS) than most of the other configurations, but the write performance was similar across the board.

Once again, the DS715 loaded with Seagate drives (iSCSI) performed well in read functions in terms of average latency, but for the most part all configurations of the DS715 posted pretty average write numbers.

Our next benchmark measures 100% 8K sequential throughput with a 16T/16Q load in 100% read and 100% write operations. In this test, the DS715 loaded with WD drives (CIFS) was the leader in read functions (25,690 IOPS) and also posted impressive write numbers (13,323 IOPS). The highest configuration in terms of writes was the DS715 loaded with Seagate drives (CIFS). In general, the iSCSI configuration posted low numbers in the 8k sequential benchmark.

Compared to the fixed 16 thread, 16 queue max workload we performed in the 100% 4k write test, our mixed workload profiles scale the performance across a wide range of thread/queue combinations. In these tests, we span workload intensity from 2 threads and 2 queue up to 16 threads and 16 queue. The leader overall was the DS215+ loaded with Seagate drives (iSCSI), but the DS715 in the same configuration also performed well. As with the 8k sequential benchmark, iSCSI tended to be a lower-performing configuration in this test. 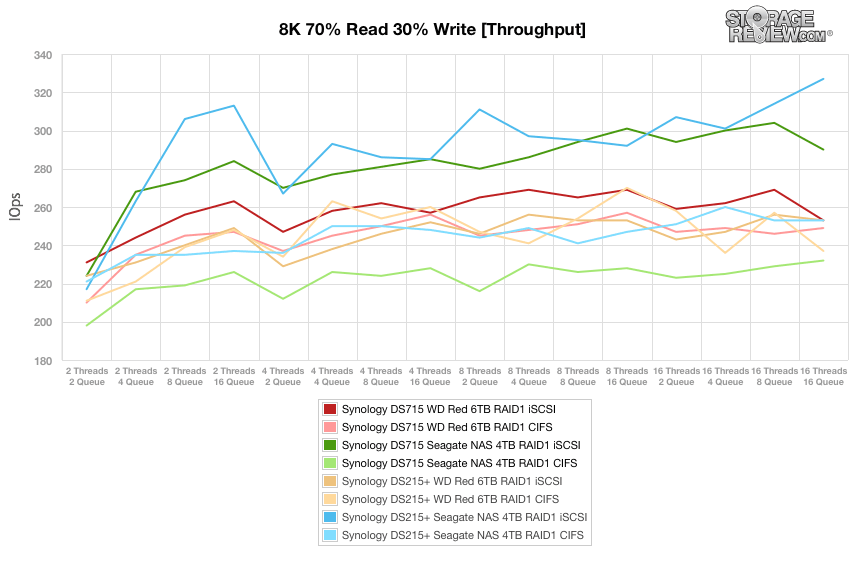 The results of the average latency benchmark closely resembled those of throughput; the DS215+ and DS715 loaded with Seagate drives and configured in iSCSI were the top performers, with systems configured in CIFS performing relatively badly. 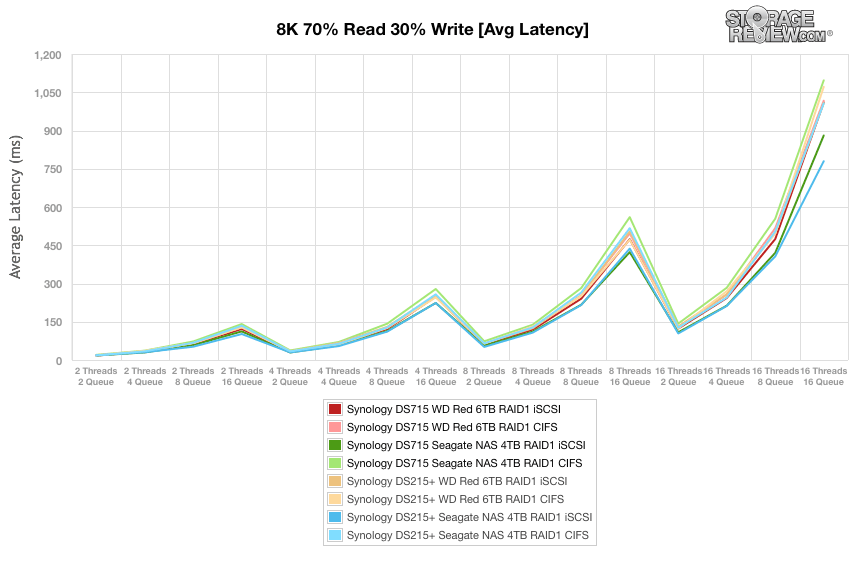 We saw somewhat different results in the max latency benchmark: the top performers were the DS715 and DS215+ loaded with WD drives and configured in iSCSI. The other configurations were scattered across the board. 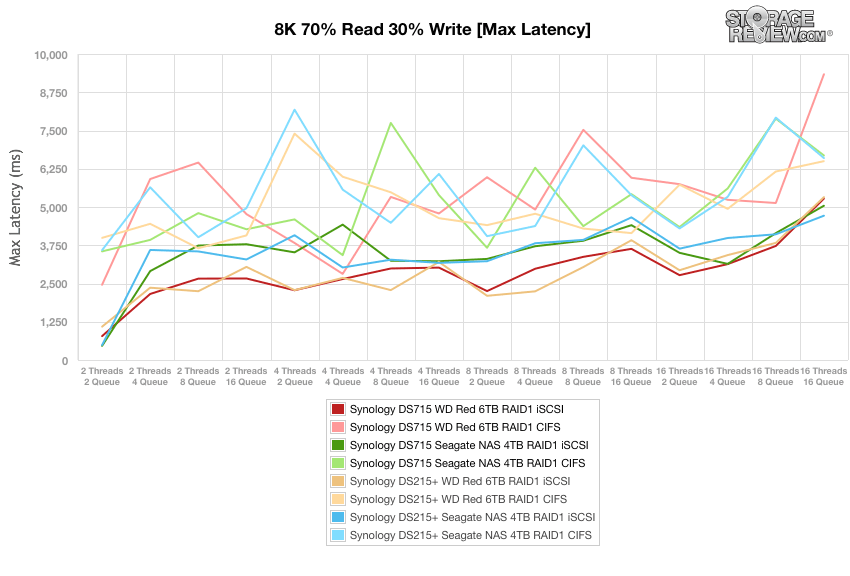 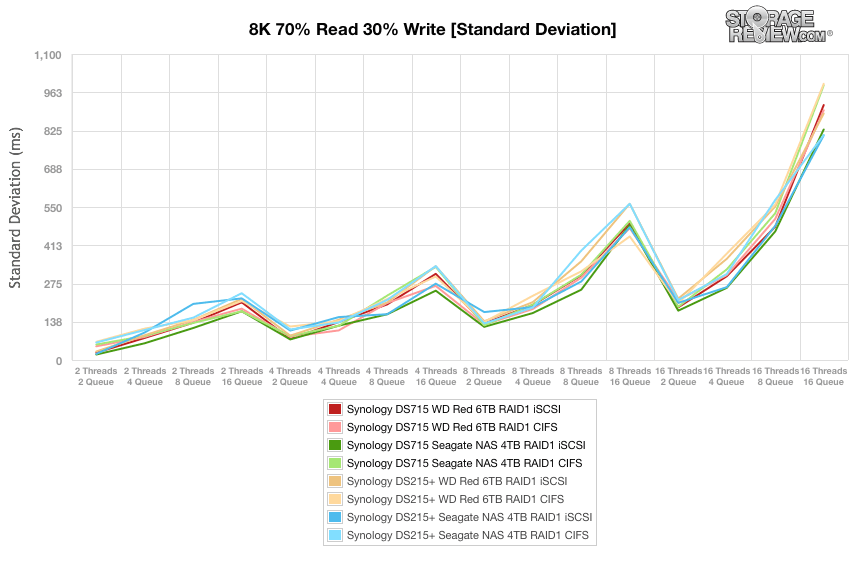 The last test in our Enterprise Synthetic Workload testing is the 128k test, which is a large block sequential test that shows the highest sequential transfer speed for a platter drive. Looking at the 128k performance of 100% write and 100% read activity, the top performer overall was the DS715 loaded with WD drives and configured in CIFS (231,380KB/s and 218,620KB/s in read and write, respectively). In general, all configurations performed well in this benchmark, although there was a drop in performance in both the DS715 and DS215+ when loaded with Seagate drives and configured in iSCSI, especially in terms of write functions (74,110KB/s and 64,910 KB/s, respectively).

The DS715 was designed as a starter NAS for growing businesses that plan to upscale in the future without compromising quality. The DS715 comes with a quad-core CPU and 2GB of memory, and delivers solid performance for a 2-bay NAS. If daisy-chained to Synology's DX513 expansion unit, the DS715 can manage up to 56TB of raw storage. In addition to its scalability and performance, the DS715 includes all of Synology's standard features, such as DSM, CMS, Cloud Station, Storage Manager, and its suite of all-in-one server applications (e.g., Directory Server, Web Station).

The DS715 performed well overall. It seemed to excel in the 8k sequential and 128K benchmarks when configured in CIFS, but tended to perform better when configured in iSCSI for mixed workloads. The DS715 performs well with both WD and Seagate drives, depending on the specific setting. Overall the DS715 holds its own well for a 2-drive NAS, making it a good starting point for businesses that expect a smaller data footprint out of the gate, but expect the data needs to grow over time.

The Synology DS715 is the perfect NAS for small growing businesses that want to retain the ability to expand their storage in the future without compromising on quality and performance in the meantime.