The DiskStation DS2419+, launched in mid-February, is the latest edition of the 12-bay tower Plus Series family. Providing 192TB (384TB with expansion unit) or raw storage capacity, the DS2419+ is designed for small- to medium-sized businesses looking for an economical data storage solution that provides the option of expanding as their storage needs grow.

The DiskStation DS2419+, launched in mid-February, is the latest edition of the 12-bay tower Plus Series family. Providing 192TB (384TB with expansion unit) or raw storage capacity, the DS2419+ is designed for small- to medium-sized businesses looking for an economical data storage solution that provides the option of expanding as their storage needs grow. 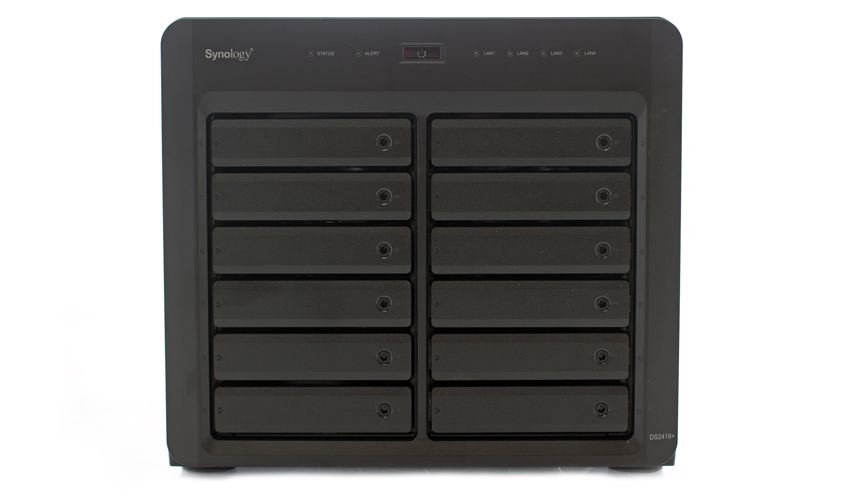 The DiskStation DS2419+ features Synology’s proprietary operating system, DiskStation Manager (DSM), which remains to be one of the most user-friendly operating systems currently on the market. In addition to the enterprise and consumer applications it provides, it’s also very simple to set up, even for first-time users. Among the many applications available in DSM, there are several that are relevant for this specific model. The DS2419+’s primary focus is backup, providing features like Active Backup for Business, Hyper Backup, Desktop Backup, and Active Backup for Office 365/G Suite. This makes it an ideal solution for smaller teams needing to safeguard critical data. Additionally, there are many backup applications and virtualization solutions (certified to work with VMware, Windows Server 2016, Citrix, and OpenStack Cinder), provided by DSM.

The Synology DS2419+ continues wearing the matte-black case, as seen with most of the Synology towers. While the DS2419+ could certainly fit on your desk, it’s not ideal if you plan to use the DX1215 expansion, as both units together will take up quite a bit of space. In addition to the size, it also has a 22.3 dB(A) noise level. While that’s not at all distractingly loud, if you’re used to hanging out with something a bit smaller, you may notice the difference. Even though this is a NAS designed to be used for smaller businesses, it still may be a good idea to find a dedicated area away from your desk for this NAS. 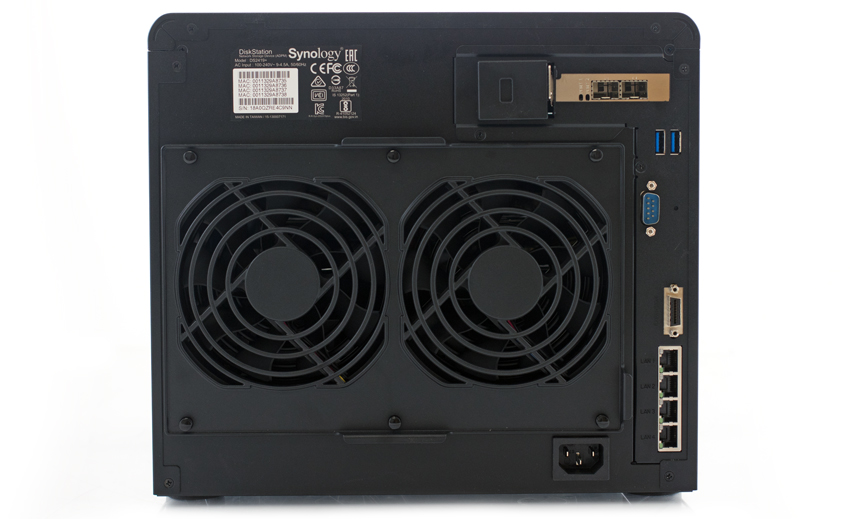 Taking up most of the real estate on the back of the NAS are the two 120mm x 120mm system fans. Starting from the top on the right-hand side is the PCIe expansion slot, two USB 3.0 ports, the reset button, the console and expansion port, four 1GbE RJ-45 ports, and the power port.

For our testing we configured the Synology DiskStation in RAID6 in both iSCSI and CIFS. We ran each test with the SSD cache off and on. For HDD we used eight Toshiba N300 NAS 8TB and for the SSD tests we chose a batch of 12 Toshiba HK3R2 960GB SSDs. This is not to see if SSDs are better than hard drives, but instead show how different configurations perform inside this NAS platform.

Compared to the fixed 16 thread, 16 queue max workload we performed in the 100% 4K write test, our mixed workload profiles scale the performance across a wide range of thread/queue combinations. In these tests, we span workload intensity from 2 thread/2 queue up to 16 thread/16 queue. In throughput, iSCSI was the obvious best performer in both SSD and HDD configurations, posting a range of 428 IOPS to 1,327 IOPS (HDD) and 9,133 IOPS to 22,795 IOPS (SSD). 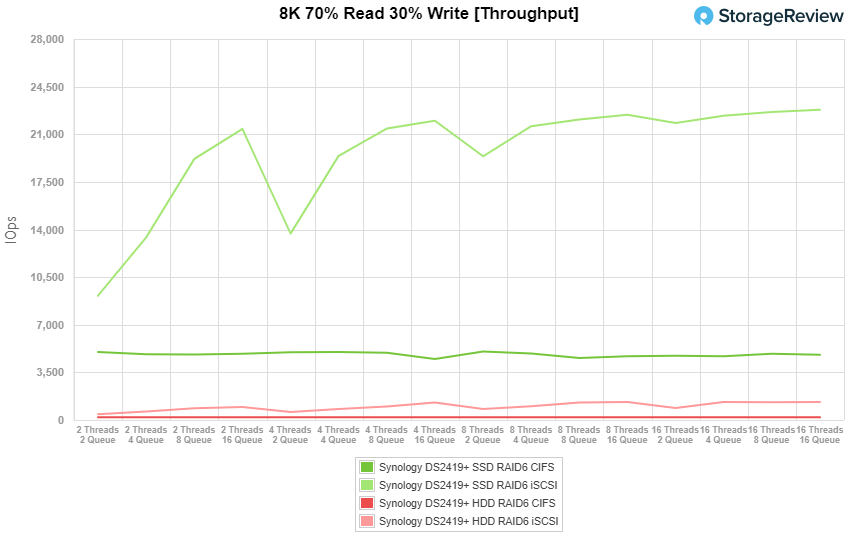 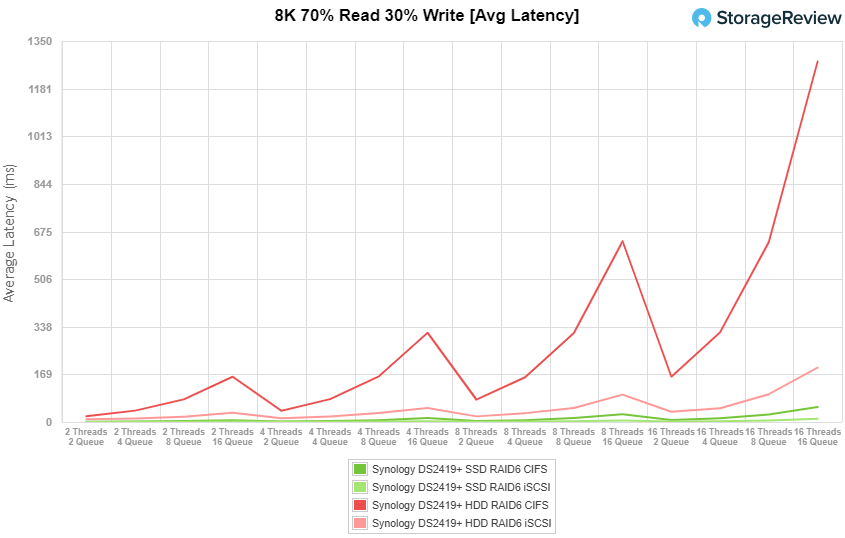 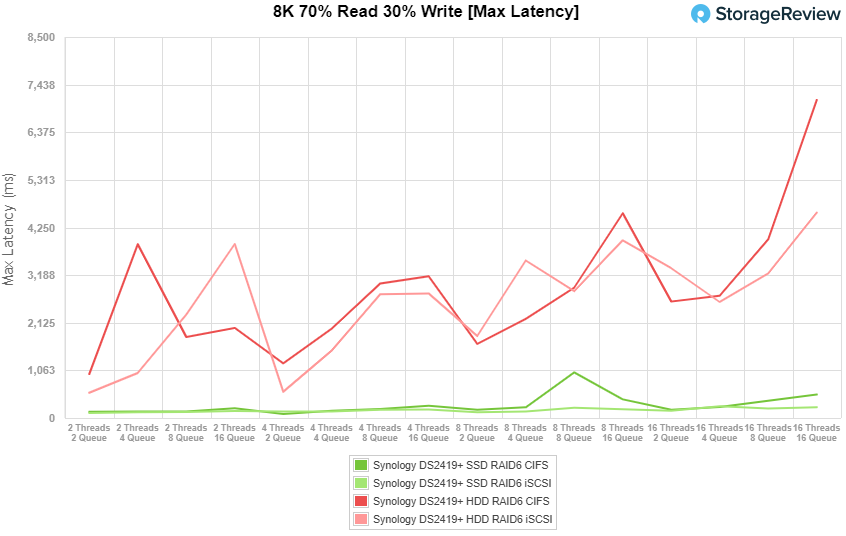 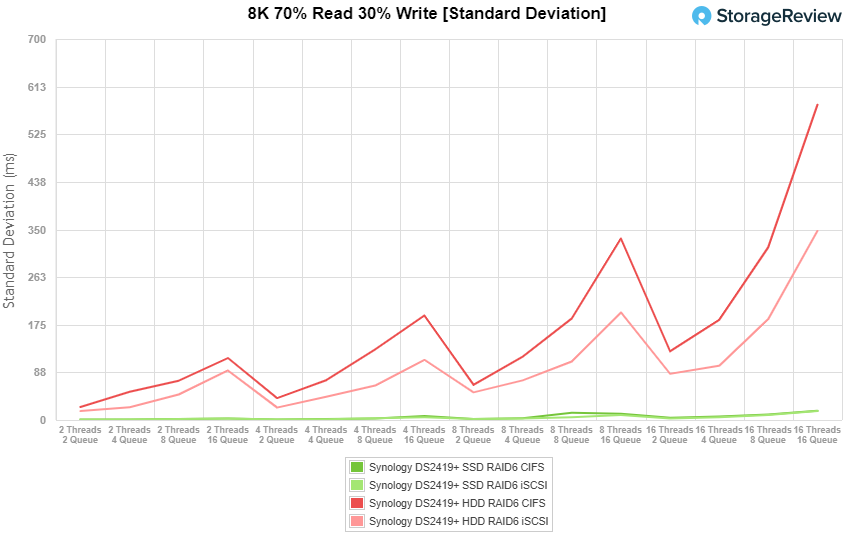 The last Enterprise Synthetic Workload benchmark is our 128K test, which is a large-block sequential test that shows the highest sequential transfer speed for a device. In this workload scenario, the DS2419+ had 728.3MB/s write and 1.01GB/s read in CIFS and 471.1MB/s write and 1.61GB/s read in iSCSI. With the SSDs, write performance improved in both CIFS and iSCSI, showing 790.06MB/s and 623.39MB/s, respectively. Read performance was practically identical in iSCSI compared to that of the HDD test. CIFS read performance showed a nice improvement at 1.51GB/s.

Synology’s 12-bay DS2419+ is the latest member of the DS24xx+ family. The DS2419+ comes equipped with an Intel Atom C3538 quad-core processor with an AES-NI hardware encryption engine. Out of the box, this NAS comes equipped with a 4GB DDR4 memory module but is expandable up to 32GB when taking advantage of the additional memory slot the NAS provides. Also featured are four RJ-45 1GbE LAN ports with link aggregation and failover support.

For small- to medium-sized businesses needing an affordable solution to backup and store important files (with the ability to expand as the business grows), they may want to take a long, hard look at Synology’s DS2419+.