The ADATA XPG SX6000 is the latest in the company’s line of M.2 PCIe SSDs. The drive is touted as being a better performer at the same costs, or offering a better cost-performance ratio. The drive comes in a M.2 (2280) form factor and leverages PCIe3x2 interface (NVMe 1.2 supported). The drive utilizes 3D NAND that gives it quoted speeds of 1GB/s read and 800MB/s write.

The ADATA XPG SX6000 is the latest in the company’s line of M.2 PCIe SSDs. The drive is touted as being a better performer at the same costs, or offering a better cost-performance ratio. The drive comes in a M.2 (2280) form factor and leverages PCIe3x2 interface (NVMe 1.2 supported). The drive utilizes 3D NAND that gives it quoted speeds of 1GB/s read and 800MB/s write. 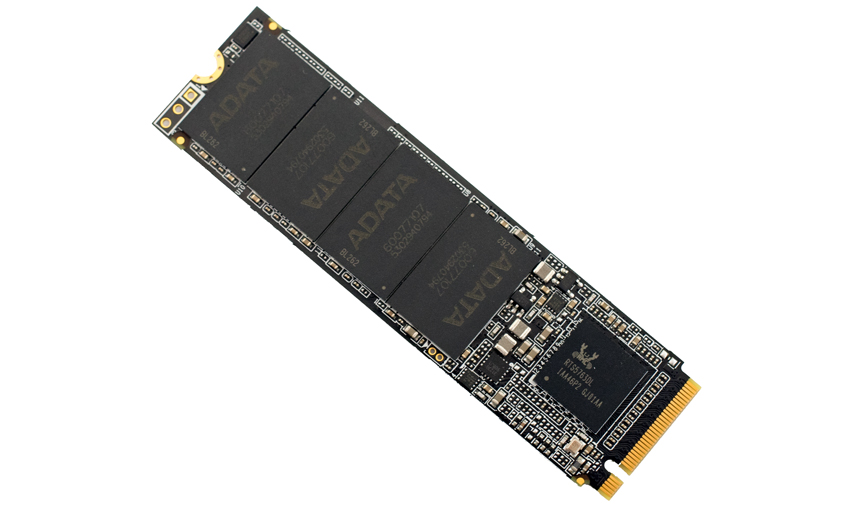 Primarily the SX6000 is ideal as a SATA upgrade. Ideal for gamers, PC enthusiasts, and video rendering professionals that are looking for a bump in performance for a reasonable price. The drive supports SLC Caching and DRAM Cache Buffer to help maintain optimal performance during heavy use. The drive comes in capacities ranging from 128GB to 1TB so users need not choose between a performance bump and a loss of capacity. And like other ADATA products, the SX6000 comes with an optional heat sink.

The ADATA XPG SX6000 comes with a 5-year warranty and the 512GB model (the capacity we are looking at in this review) can be picked up for as little as $135. 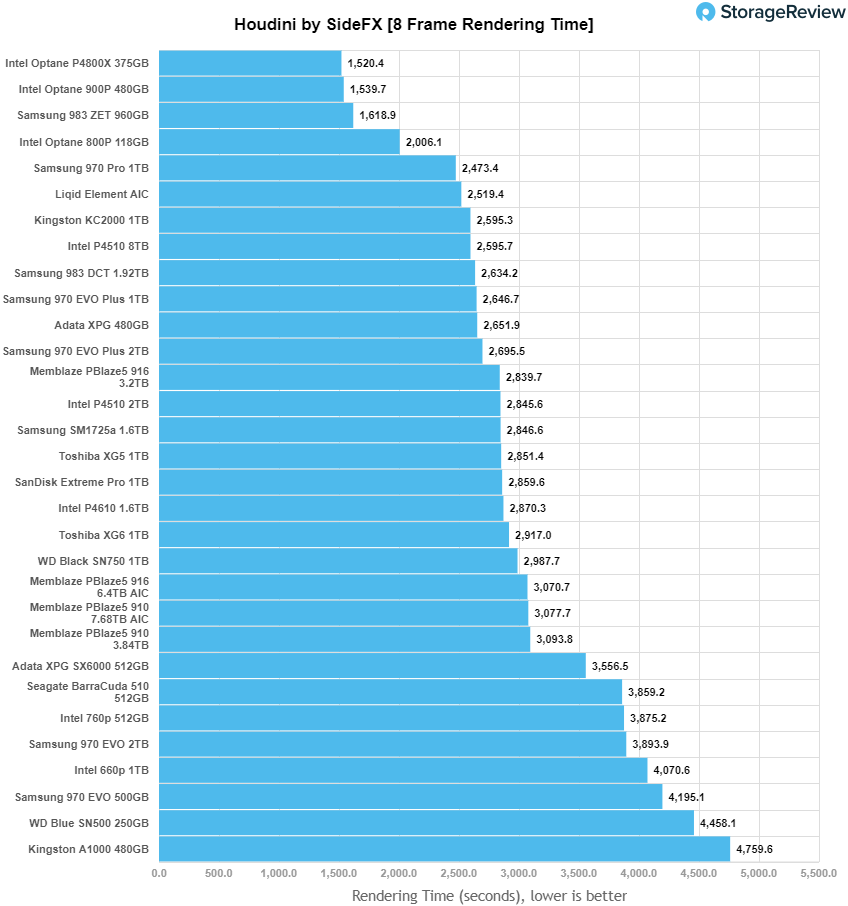 When looking at SQL Server Output, the SX6000 drive landed at the bottom of the pack of drives with a score of 2,103.2 TPS, well below the other drives. 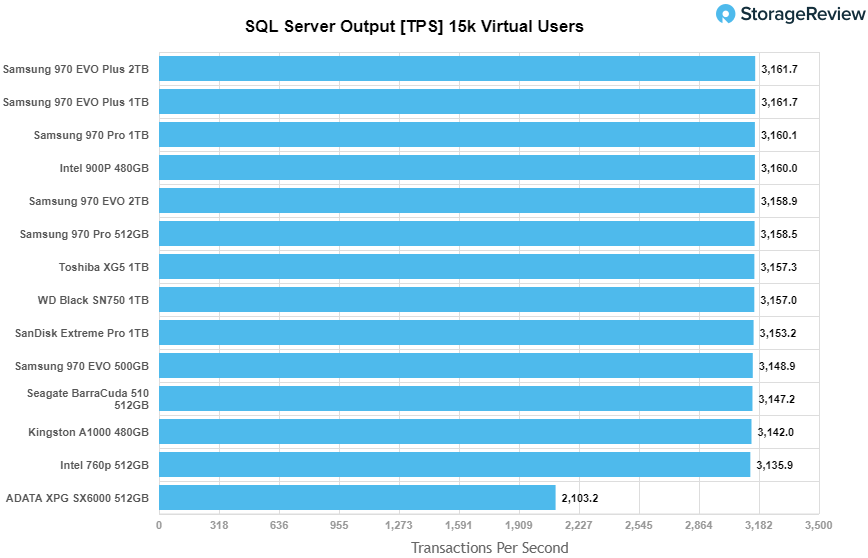 For average latency of the same test, the SX6000 drive hit 2,386ms, massively above the other drives for last place. 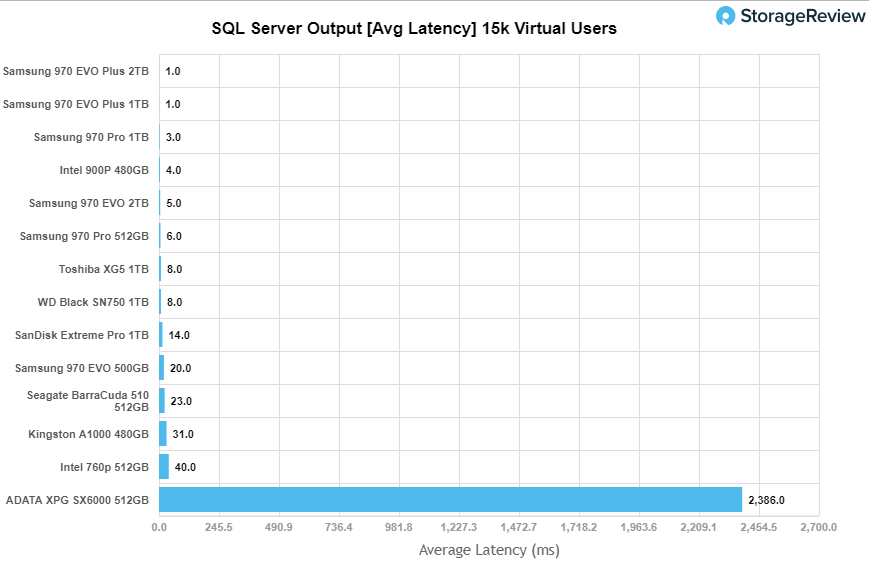 The peak 4K read performance of the SX6000 drive was last with a peak score of 93,970 IOPS at a latency of 1.36ms though the drive did have sub-millisecond latency until about 85K IOPS.

With 4K write the SX6000 again came in last with a peak performance of about 19.7K IOPS and a latency of 5ms before dropping off in performance and shooting up in latency.

Next, we looked at our VDI benchmarks, which are designed to tax the drives even further. These tests include Boot, Initial Login, and Monday Login. Looking at the Boot test, the SX6000 stayed in the bottom of the pack with a peak performance of about 43K IOPS and a latency of 792ms before dropping off some and latency going up. This was the first time that the SX6000 stayed under 1ms throughout.

With VDI Initial Login the SX6000 was again last seeing a massive latency spike before dropping off to a peak performance of 8,625 IOPS at 2.12ms latency.

The ADATA XPG SX6000 is an M.2 PCIe SSD aimed at being a performance upgrade from older SATA SSDs. The drive has quoted speeds of 1GB/s read and 800MB/s write and it offers both SLC Caching and DRAM Cache Buffer to help optimize performance. The SX6000 comes in capacities as high as 1TB and comes with a 5-year warranty. 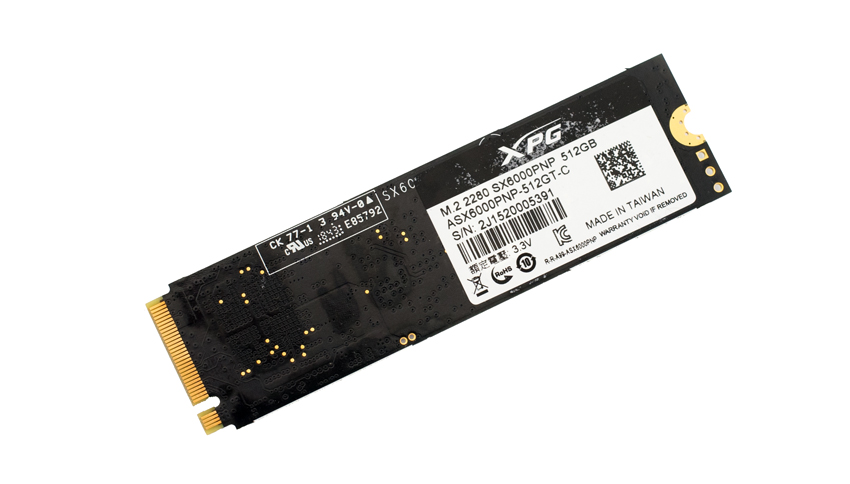 Looking at performance the drive didn’t do so well in our benchmarks. In our Houdini test the drive came in the bottom third with 3,556.5 seconds. From here on, the drive always came in last place. In our SQL Server the drive had a very low 2,103.2 TPS and an incredibly high latency of 2,386ms. In our VDBench the drive didn’t fare much better with peak performances of 94K IOPS for 4K read, 19.7K IOPS for 4K write, 674MB/s for 64K read, and for 64K write the drive hit 234MB/s. The drive did not maintain sub-millisecond latency in any of the above tests. In our VDI Boot the drive did stay under 1ms but was in last with about 43K IOPS. In VDI Initial Login and VDI Monday Login, the drive his 8,625 IOPS and 9,805 IOPS respectively.

Overall, the ADATA XPG SX6000 is not a very high-performance drive, despite the specs. As an upgrade from an old SATA SSD or hard drive, or if cost is a limiting factor, then the SX6000 is probably fine. If one is after a better performance profile though, there are several better options available.