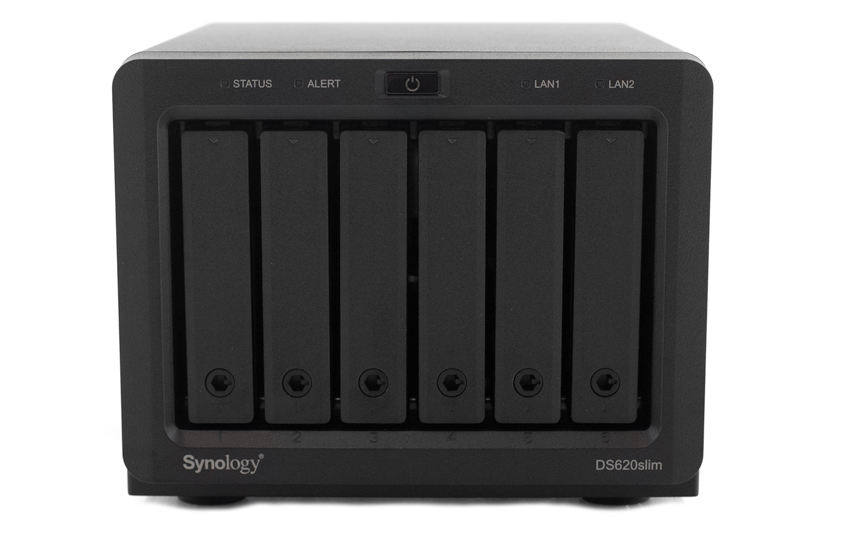 The new mini Synology NAS is backed by the company’s usual 2-year warranty and goes for roughly $450.

The Synology DS620slim measures in at just 12.1 x 15.1 x 17.5 mm, allowing to be placed virtually anywhere near a workstation. It sports a nice all-black design with rubber feet so it will sit firmly wherever you put it.

The front panel is home to all 6 hot-swappable drive bays (which support both 2.5inch SSDs and HDDs), making them easily accessible when you need to remove or install drives. Each drive bay has a drive status indicator. Along the top are the usual LED indicators: Status, Alert, and LAN (with the power button in the middle). 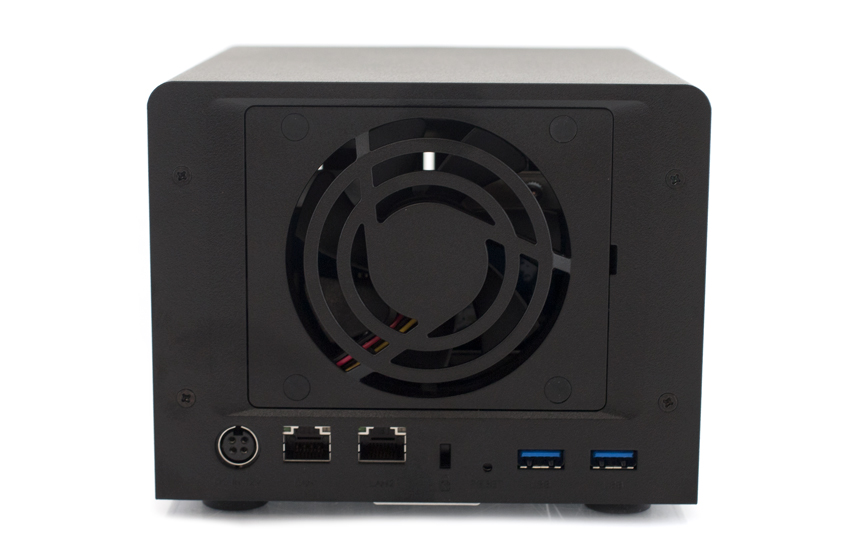 The back panel is home to all the connectivity, including as the power and LAN and USB 3.0 ports, as well as the reset button and Kensington lock slot. Above is the fan (8cm x 8cm), which emits a beeping sound if it fails.

In the first of our enterprise workloads, we measured a long sample of random 4K performance with 100% write and 100% read activity. Looking at IOPS, the DS620slim showed its best SSD RAID6 performance in iSCSI, boasting 20,505 IOPS read and 10,700 IOPS write. In CIFS, writes were virtually the same with 10,580 IOPS, though reads were much slower at 8,220 IOPS

For 4K standard deviation we saw, the DS620slim continued its great read performance in iSCSI with 9.932ms, though the CIFS configuration had better write performance with 37.378ms.

Compared to the fixed 16 thread, 16 queue max workload we performed in the 100% 4K write test, our mixed workload profiles scale the performance across a wide range of thread/queue combinations. In these tests, we span workload intensity from 2 threads and 2 queue up to 16 threads and 16 queue. In throughput, the DS620slim posted 6169 IOPS through 11,393 IOPS in iSCSI while CIFS had a range of 6,466 IOPS through 7,485 IOPS. 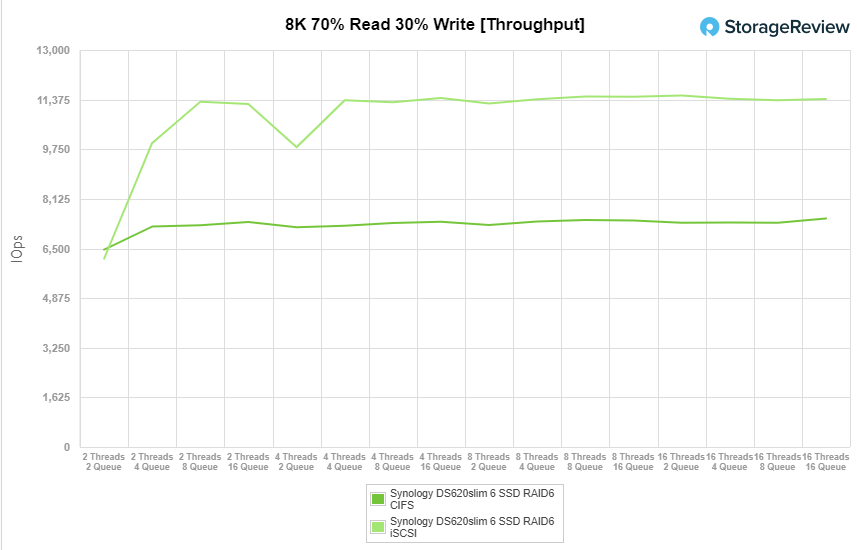 In average latency, iSCSI showed the best overall performance again (specifically later in the queue depths) with a range of 0.64ms through 22.46ms. CIFS posted a range of 0.61ms to 34.19ms. 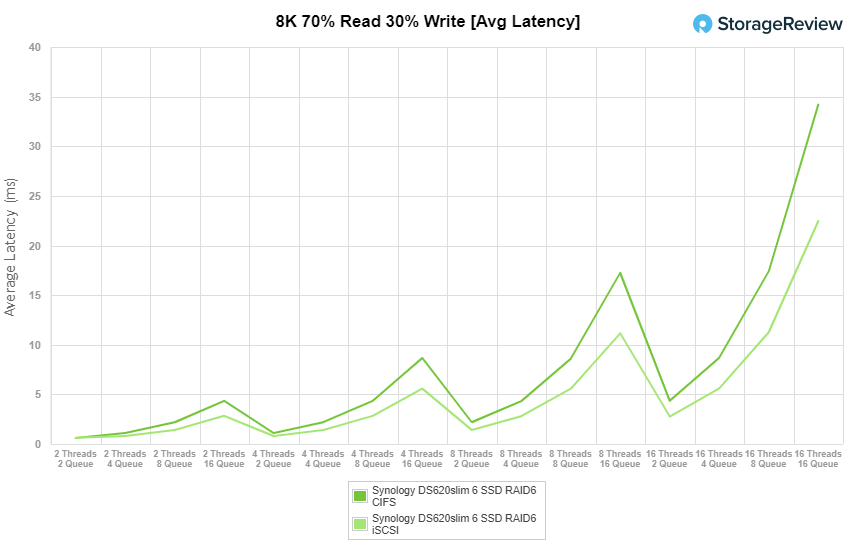 For maximum latency, though it started off with much better performance, iSCSI (82.72ms to 512.16ms) was soon out-performed by the CIFS configuration, which posted a range of 152.74ms through 308.27ms. 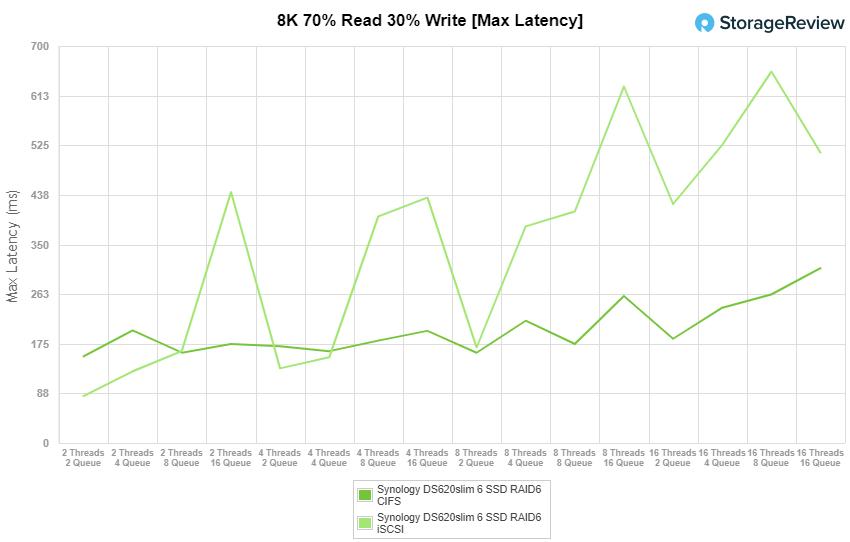 Next, we move on to the standard deviation where results were very similar between iSCSI and CIFS, posting 0.79ms through 30.14ms and 0.74ms through 31.14ms, respectively. 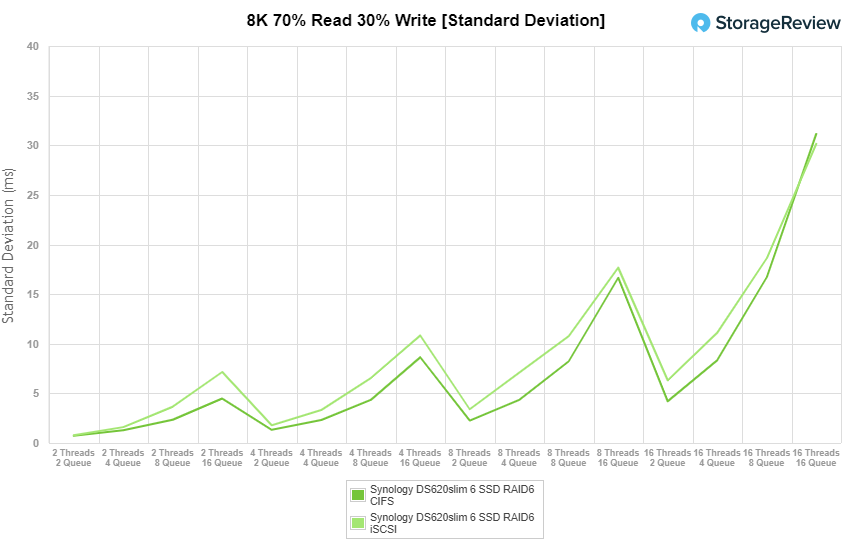 The last Enterprise Synthetic Workload benchmark is our 128K test, which is a large-block sequential test that shows the highest sequential transfer speed for a device. In this workload scenario, results were pretty much identical, with the CIFS configuration barely pulling out in both read and writes with 231.4MB/s and 224.9MB/s, respectively. iSCSI had 224.7MB/s read and 230.7MB/s write.

The Synology DiskStation DS620slim is an excellent choice for those in need of a compact NAS solution with moderate storage capacity. Synology’s new 6-bay DiskStation features dual USB 3.0 and 1GbE RJ-45 ports, is powered by an Intel Celeron dual-core processor and supports up to 30TB in maximum internal raw capacity (or maximum single volume size of 108 TB). Like all Synology solutions, the DS620slim also comes with a ton of useful software through the company’s DiskStation Manager (DSM) OS. This includes apps such as File Station, which features simple web-based management tools, drag-and-drop operations, and advanced search functionality, and Cloud Sync, which stores content on Dropbox, Google Drive, Microsoft OneDrive, Baidu, and Box storage in sync with the DS620slim.

Overall the DS620slim is another Synology NAS solution that packs in a lot of functionality inside a very small footprint.