Synology expanded their already-extensive portfolio back in November, 2018 with the 8-bay tower NAS, DS1819+. The DiskStation DS1819+, successor to the DS1817+, comes equipped with a Quad Core 2.1GHz CPU with an AES-NI hardware encryption engine, and 4GB DDR4 RAM with expansion capabilities up to 32GB. For businesses demanding a NAS with a large data storage capacity, the DS1819+ provides a maximum internal raw storage capacity of 112TB with expansion capabilities of up to 252TB when using two DX517 expansion units.

Synology expanded their already-extensive portfolio back in November, 2018 with the 8-bay tower NAS, DS1819+. The DiskStation DS1819+, successor to the DS1817+, comes equipped with a Quad Core 2.1GHz CPU with an AES-NI hardware encryption engine, and 4GB DDR4 RAM with expansion capabilities up to 32GB. For businesses demanding a NAS with a large data storage capacity, the DS1819+ provides a maximum internal raw storage capacity of 112TB with expansion capabilities of up to 252TB when using two DX517 expansion units. 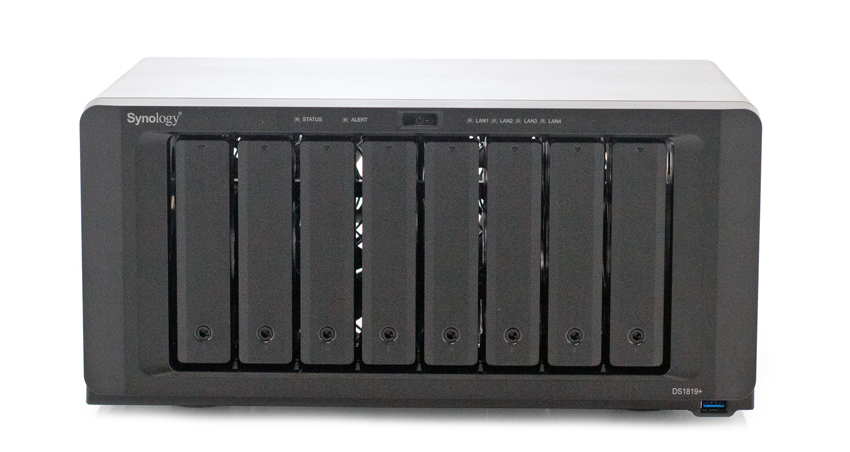 The DS1819+ is managed by Synology’s OS, DiskStation Manager (DSM), using its most current version, DSM 6.2. DSM takes the complexities of using a NAS and simplifies it. Not only is DSM one of the most user friendly NAS OS out there (and a bonus buying any Synology product), DSM also allows users to leverage powerful tools that range from home use to enterprise. Particularly for the DS1819+ the focus is on backup where Synology offers several packages (Synology’s term for applications). The DS1819+ offers to packages focused on security as well as AES 256-bit encryption, 2-step verification, and a trust level that protects the NAS from third party packages that may have a security issue. All NAS with DSM are also fully certified storage virtualization solutions that work with VMware, Windows Server 2016, Citrix, and OpenStack Cinder.

The DiskStation DS1819+, not unlike most Synology tower NAS, sports a matte black metal enclosure. Looking at the front of the NAS, you’ll find 8 vertical drive bays, each with its own drive lock and status indicator. Each drive tray can be removed by pressing the lower portion of the tray and simply pulling it out. Above the drive bays is the power button, which is centered between the Status, Alert, and LAN indicators. On the top-left and bottom-right, you’ll find the company and product branding, respectively. Finally, below the product branding on the bottom-right resides a USB 3.0 port for quickly connecting external drives for backup or loading files quickly. 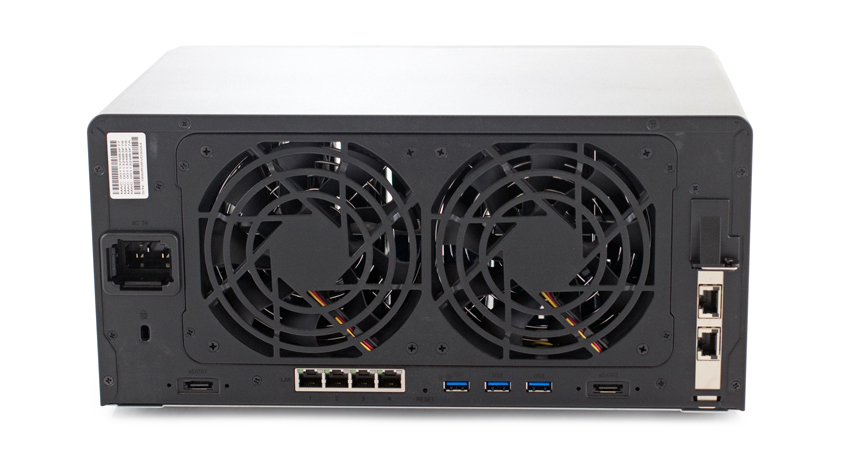 Looking at the back of the DS1819+, we see Synology took advantage of the large amount of available real estate by including dual 120mm x 120mm fans. To the left of the system fans are the power port and Kensington Security Slot. Below the fans are the four 1 GbE RJ-45 LAN ports, three USB 3.0 ports, and one eSATA port on each side. On the right-hand side is the PCIe expansion slot populated with a dual-port 10GbE NIC. 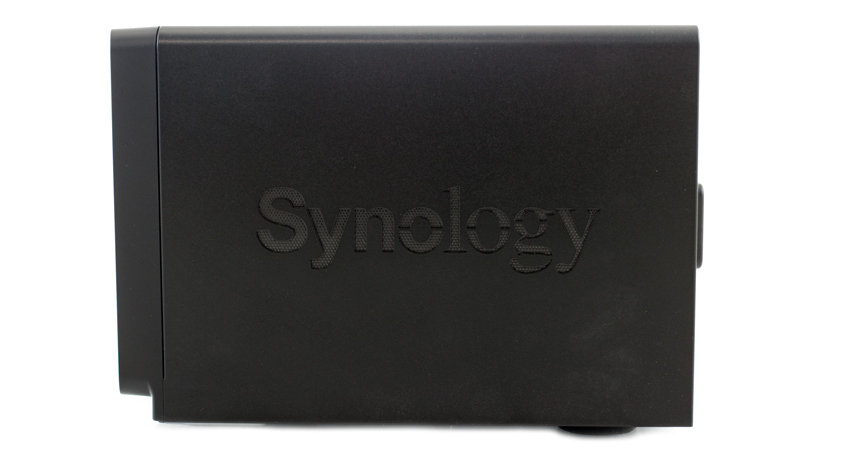 On either side of the DS1819+ is the Synology logo, which also acts as a small ventilation system for additional airflow.

Last year, StorageReview did an in-depth review of Synology DiskStation Manger. As stated above, DSM in incredibly easy to use and intuitive for nearly everyone, that is not something seen from many NAS vendors GUIs. In the previous review we went over the main packages for office and home use. However there are a few specific packages that would be better for use with the DS1819+.

As far as the overall look and feel, DSM 6.2 doesn’t look much different than the version we reviewed. Users are still greeted with the main screen that has their widgets on the right for things like Storage, System Health, Resource Monitoring, and others of their choosing. The rest of the screen can be populated by whichever packages are most used or users can click on the main menu in the upper left to pull down a list of all the packages installed. 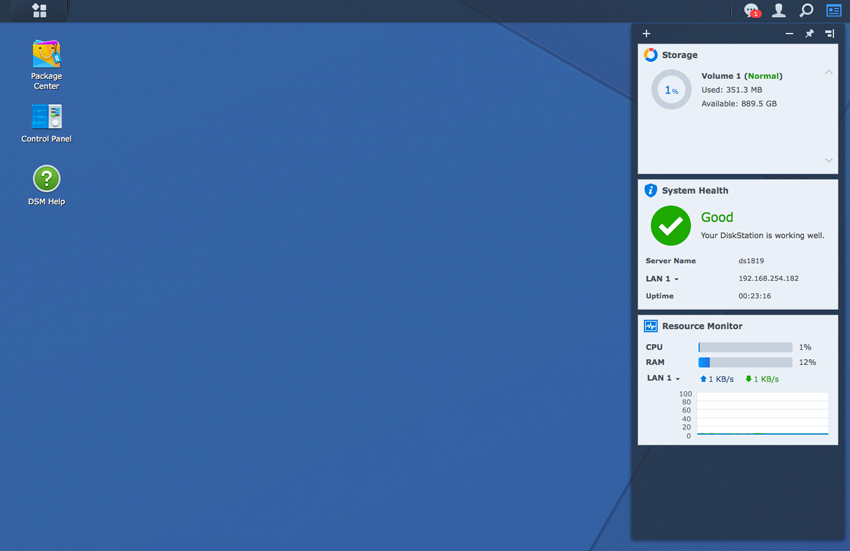 In Package Center users can easily sort through the packages they need to run their business. All packages are listed in alphabetical order or there are drop down screens to quickly find what one is searching for. Synology also has several third party apps in their Package Center that the trust level protects from maliciously attacking the NAS. 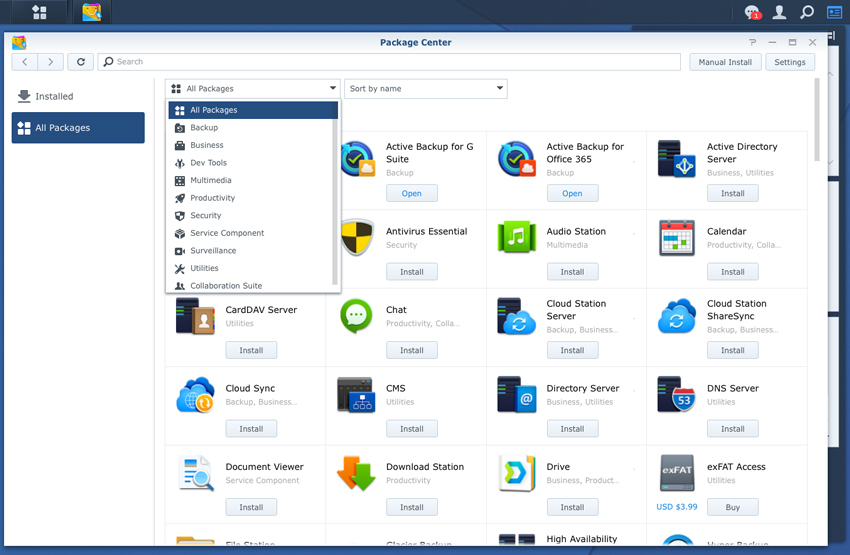 For some of the features a little more specific to a larger NAS such as the DS1819+ would be more inclined to use. Data needs to be kept secure. The NAS comes with AES 256-bit encryption as well as two-step verification. A further step is Synology’s Security Advisor. As the name implies, this package scans the system, the account, and the network looking for potential issues. It also lets users know if an update is available. Users can gather results over time or use analytics to see how threats affect their system. 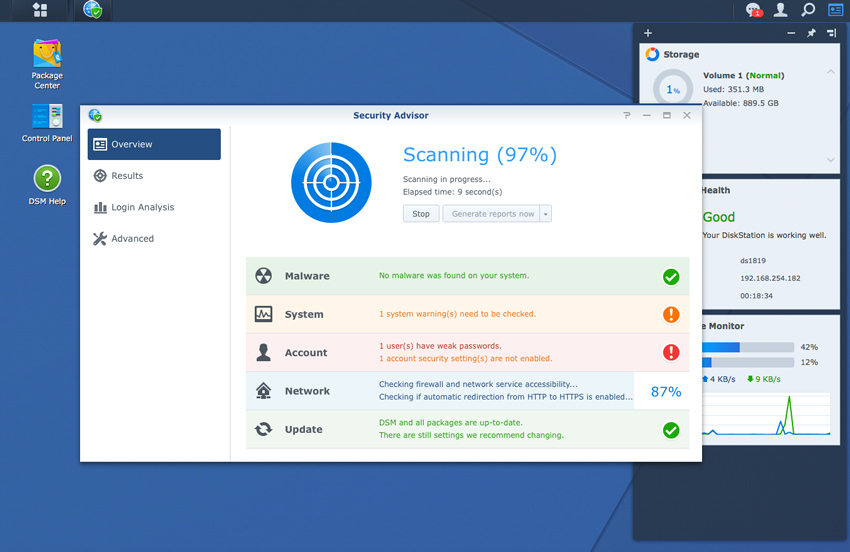 Keeping those that want to steal your data out of it isn’t the only security users need. Something can go wrong with any system or the location it resides in, in the case of a natural disaster. Data needs to be backed up but there is usually multiple places where data can reside. Active Backup for Business gives users a quick and easy way to protect various devices: PC, Physical Server, VMs, and file servers. Users can select the devise they want backed up, schedule the backup on a nifty calendar, restore when needed, and view various activities of the Package. 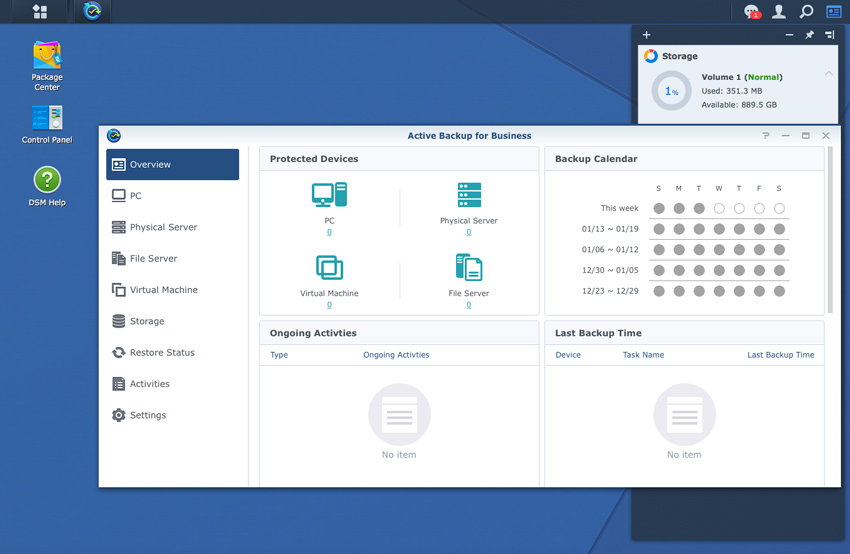 Another method of backing up the NAS is leveraging Hyper Backup. This package enables users to backup their Synology NAS to various targets. These backups can be scheduled and can be done in multi-versions. The data being backed up can be deduplication and encrypted to save capacity and add another level of security. 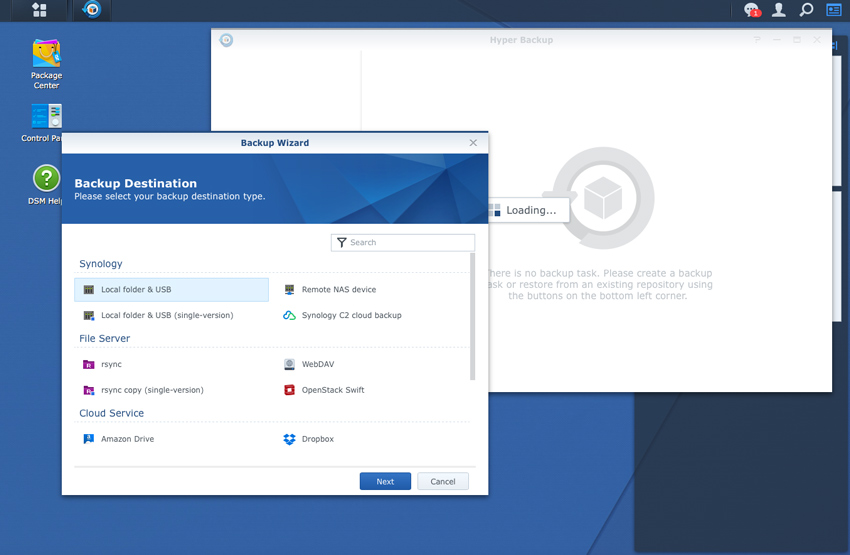 Next, we looked at average latency of the DS1819+ where VMs ranged from 195ms to 183ms (RAID6) while aggregate performance showed 189ms, improving over the previous-generation DS1817+.

During our sysbench tests, we looked at the DS1819+ configured in RAID6 using 4 VMs only. In aggregate transactional performance, the DiskStation DS1819+ posted a score of 1,166 TPS, showing improved results over the DS 1817+ which showed only 753 TPS.

In the first of our enterprise workloads, we measured a long sample of random 4k performance with 100% write and 100% read activity to get our main results. When populated with the Toshiba HK3R2 SSD (RAID6), the DS1819+ posted its top performance in iSCSI with an impressive 37,408 IOPS read and 20,648 IOPS write. In our HDD configuration (Toshiba N300 NAS 8TB), it showed 2,294 IOPS read and 1,183 IOPS write (iSCSI). In CIFS, writes were nearly identical, showing 1,127 IOPS. However, reads showed an underwhelming 295 IOPS.

Our next benchmark measures 100% 8K sequential throughput with a 16T16Q load in 100% read and 100% write operations. Here, the DS1819+ performance under iSCSI while populated with SSDs, showed 57,592 IOPS in reads and 40,395 IOPS in writes. Our HDD iSCSI configuration also showed impressive read and write results, with 55,81 IOPS and 36,304 IOPS, respectively. CIFS showed very close performance between to two media with

Compared to the fixed 16 thread, 16 queue max workload we performed in the 100% 4k write test, our mixed workload profiles scale the performance across a wide range of thread/queue combinations. In these tests, we span workload intensity from 2 threads and 2 queues up to 16 threads and 16 queues. As you can from the chart below, the Synology DS1819+ had three relatively steady performances in both HDDs (ranging from 201 to 200 IOPS for HDD CIFS and 446 to 1,344 IOPS for HDD iSCSI) and the SSD in CIFS (ranging from 4,975 to 4,957 IOPS). The SSD in iSCSI ranged from 9,100 to 23,548 IOPS. 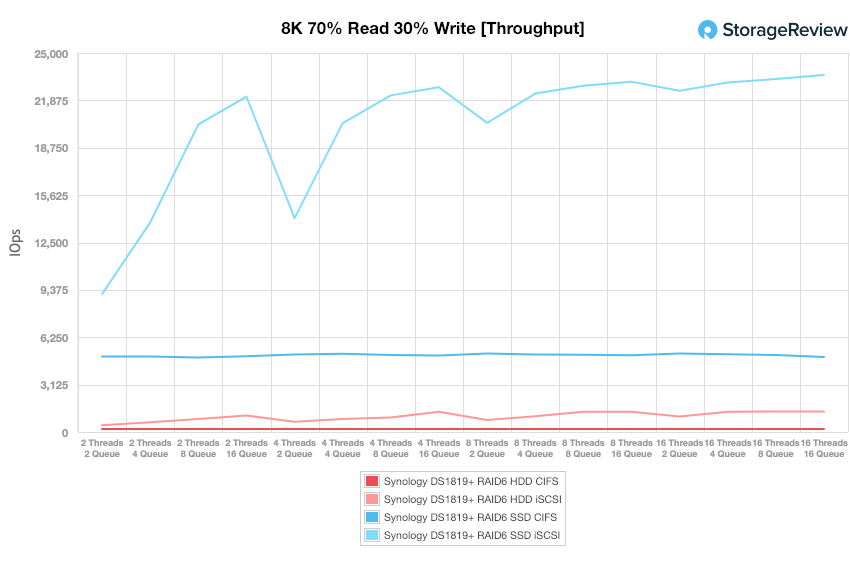 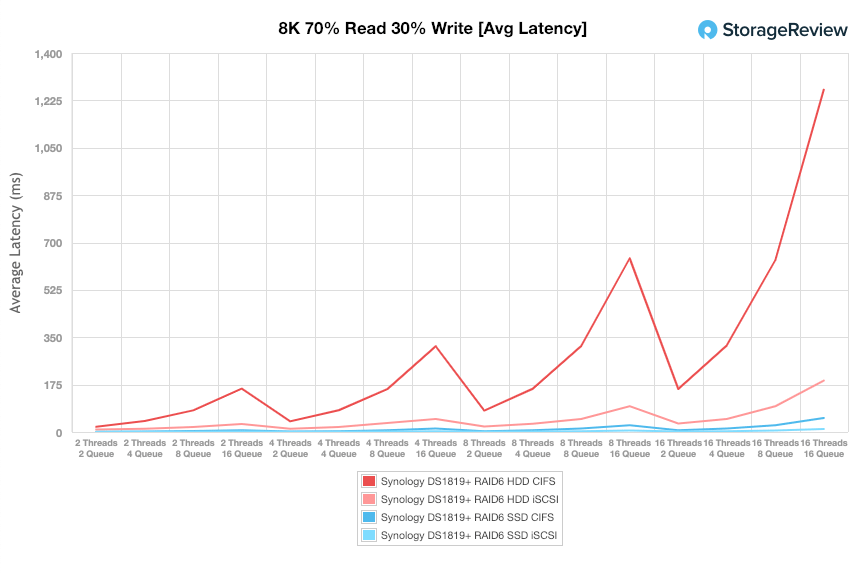 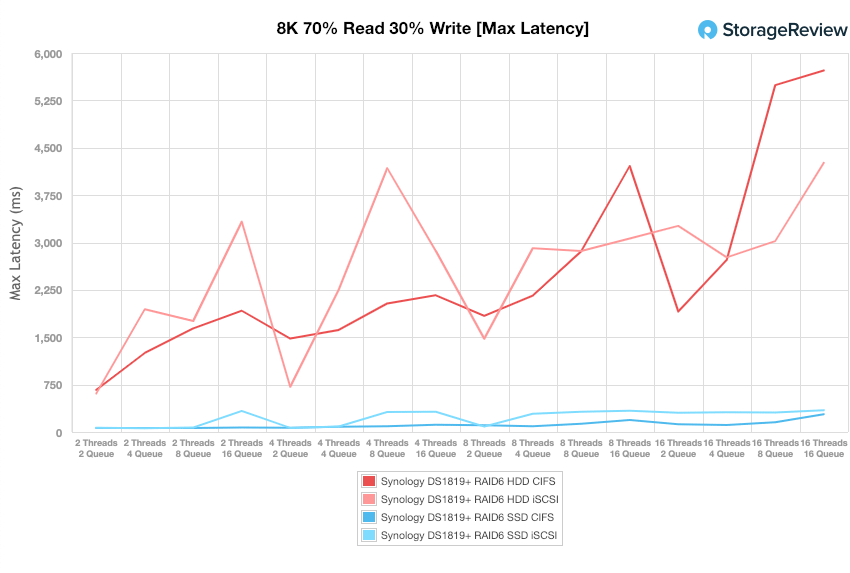 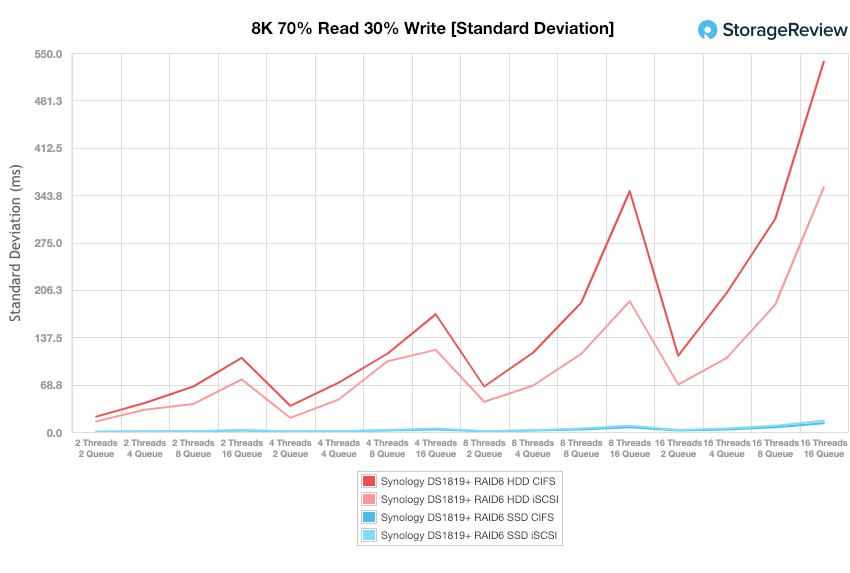 The last Enterprise Synthetic Workload benchmark is our 128K test, which is a large-block sequential test that shows the highest sequential transfer speed for a device. In this workload scenario, the DS1819+ had fairly strong read performance across the board with 1.66GB/s HDD iSCSI, 1.61GB/s SSD CIFS, 1.49GB/s HDD CIFS, and 1.16GB/s SSD iSCSI. For writes we saw 507MB/s HDD iSCSI, 782MB/s SSD CIFS, 749MB/s HDD CIFS, and 666MB/s SSD iSCSI.

Synology’s 8-bay DS1819+ is the newest member of the DS18xx+ family. The DS1819+ comes equipped with a Quad Core 2.1GHz CPU with an AES-NI hardware encryption engine, 4GB DDR4 RAM with expansion capabilities up to 32GB, and four RJ-45 1GbE LAN ports with link aggregation and failover support. As with most newer model NAS in Synology’s + series, the DS1819+ features a PCIe expansion slot, one of the bigger selling points of the NAS. By itself, the 8-bay DS1819+ has a maximum capacity of 112TB, but can reach up to 252TB when using the two DX517 expansion units.

On the subject of performance, the DS1819+ is a breath of fresh air when looking back at the DS1817+, showing increased performance in every test. The overall best configuration was in iSCSI while populated with the Toshiba HK3R2 960GB SSDs. During our 100% read/write random 4k test, the DS1819+ posted results at 37,408 IOPS read and 20,648 IOPS write. In HDD configurations, the DS1819+ showed its best performance in iSCSI with 2,294 IOPS read and 1,183 IOPS write. During our 8k sequential throughput tests, the DS1819+ recorded its best performance under iSCSI while populated with SSDs, showing 57,592 IOPS in reads and 40,395 IOPS in writes.

In both of our application benchmarks measuring SQL Server and MySQL database performance the DS1819+ improved over its previous-generation offering. SQL test results have improved compared to the previous model, with aggregate score of 6,082.8 TPS and an average latency of 189ms, putting it slightly above the Netgear 628x. A similar outcome was measured in our Sysbench test, where the DS1819+ measured 1,167 TPS in aggregate, an area where the previous model measured 753 TPS.

The Synology DS1819+ updates the core components of the DS1817+ while also supporting a larger RAM footprint for today’s more demanding applications. Of course Synology’s DSM software is there too, which is the most comprehensive NAS OS package on the market, both in terms of native configuration options and support for third party applications. While visually they look the same, the DS1819+ takes over as the 8-bay workhorse for Synology and will do well in the SMB, SOHO and edge computing use cases it’s designed for.