The Synology DS415play is a 4-bay NAS for the media enthusiast. Like its smaller sister, the DS214play, the DS415play comes with video transcoding, that allows users to convert media files to usable extensions. The DS415play looks almost identical to the DS414 but it comes with a total capacity of 24TB, an Intel Atom dual core 1.6GHz processor, 1GB of DDR3 RAM, and plenty of external ports, three USB 2.0 and two USB 3.0, to connect and power multiple peripheral devices at the same time. The DS415play has four hot-swappable, tool-less drive bays accessed through the front of the device. And the DS415play uses Synology’s award winning DiskStation Manager OS.

The Synology DS415play is a 4-bay NAS for the media enthusiast. Like its smaller sister, the DS214play, the DS415play comes with video transcoding, that allows users to convert media files to usable extensions. The DS415play looks almost identical to the DS414 but it comes with a total capacity of 24TB, an Intel Atom dual core 1.6GHz processor, 1GB of DDR3 RAM, and plenty of external ports, three USB 2.0 and two USB 3.0, to connect and power multiple peripheral devices at the same time. The DS415play has four hot-swappable, tool-less drive bays accessed through the front of the device. And the DS415play uses Synology’s award winning DiskStation Manager OS.

The Synology DS415play is aimed at owners who have large digital media stores and like to stream their media, even in HD. Not only can users create and stream media across multiple platforms, it can also stream to DLNA-compliant devices in the same local area network. Through Synology’s QuickConnect users can access they NAS anywhere and at anytime. QuickConnect also allows users to access the media library on their NAS through their mobile devices. While in a lot of ways it is similar to the DS214play, the DS415play comes with over twice the maximum capacity but no SD slot, for about $200 more. 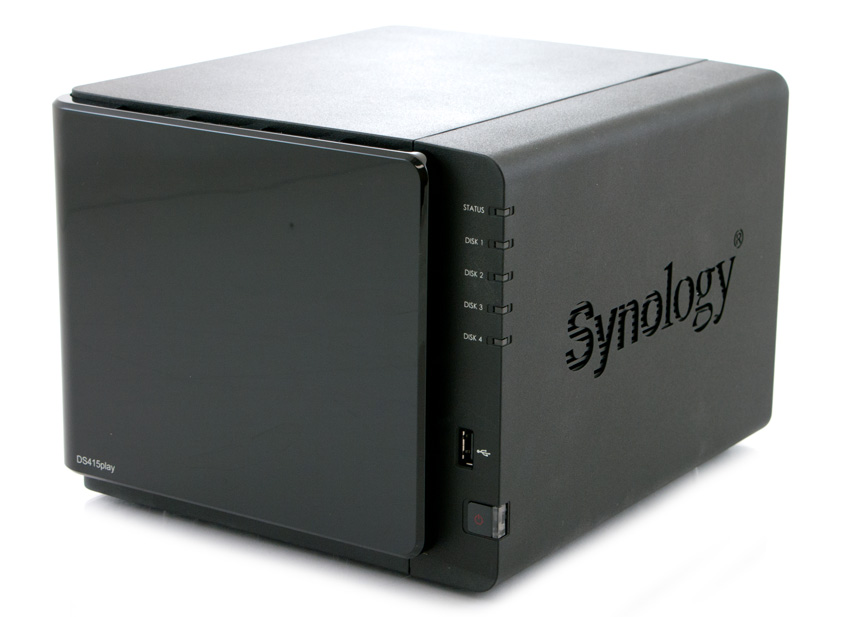 The DS415play features Synology’s typical compact and sleek black design. It is almost identical in design to the DS414. It has a matt black finish. The front of the device is mostly covered in a glossy black, easily removable cover, with DS415play written in white on the bottom left hand corner. Beneath the cover the four hot-swappable bay drives can be accessed. To the right of the cover are five LED indicator lights for status of the NAS and of each drive. Beneath the status lights is one of the USB 2.0 ports and the power button. 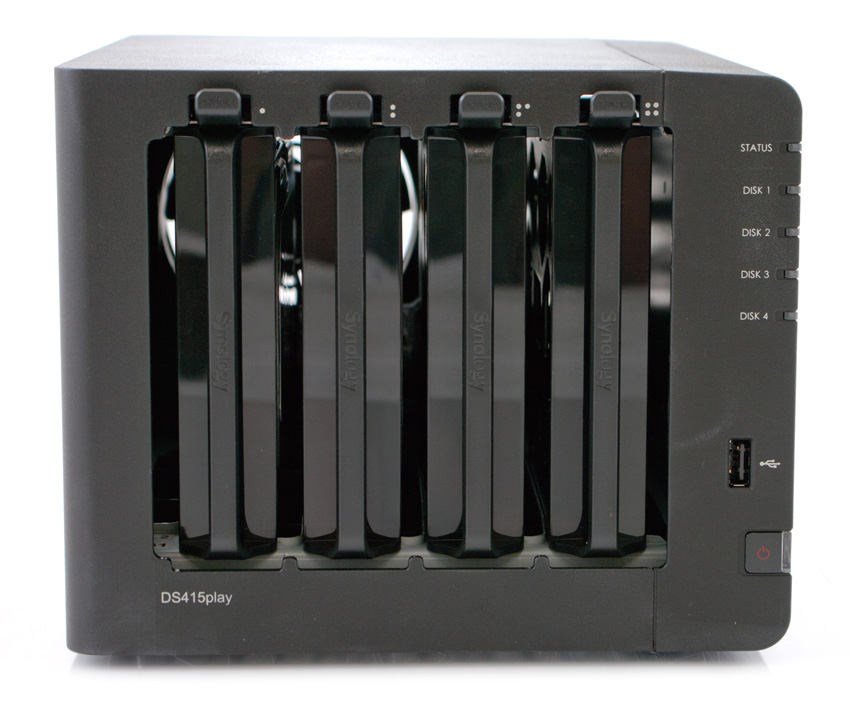 Removing the quick release panel one can access the drive trays. The drive trays pop out by depressing the latch above, snap the drive into place and push the tray back in. Both sides of the device have Synology branding that also doubles as ventilation.

Going around to the rear of the device, the two 92mm fans dominate the upper two-thirds of the DS415play. On the left hand side there is a reset button, two USB 2.0 ports, a LAN port, and the power inlet. Moving over to the right, there is a place for a Kensington lock and two USB 3.0 ports. 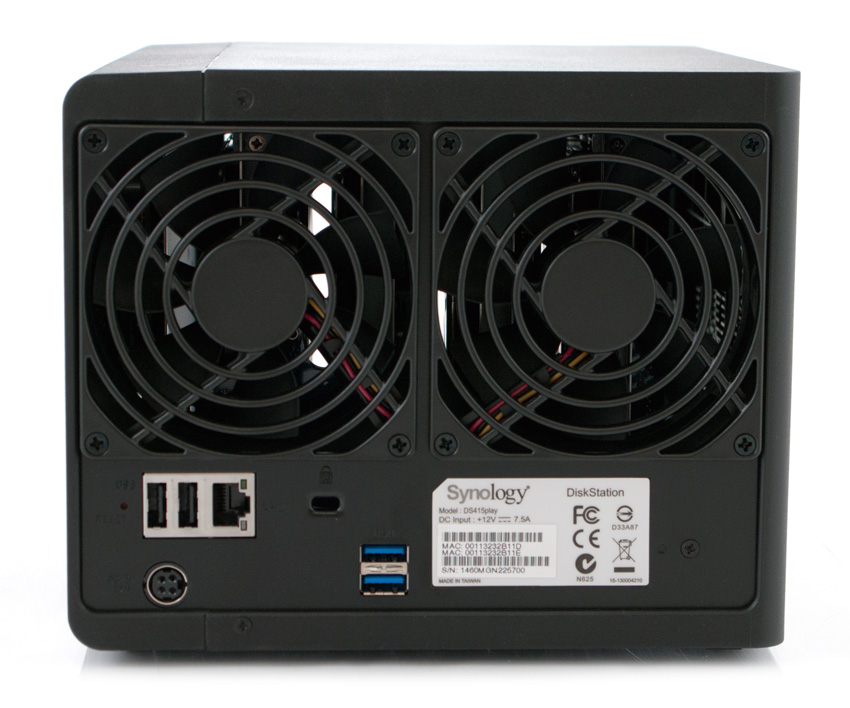 The Synology DiskStation DS415play leverages the traditional DSM OS (the current version is 5.0), which we've covered in the past. Like the DS214play, the DS415play also has the capability, though is its hardware transcoder, to stream video much more efficiently than other DiskStation models. This lets media enthusiasts easily stream to a variety of different devices without having to re-encode video every time. 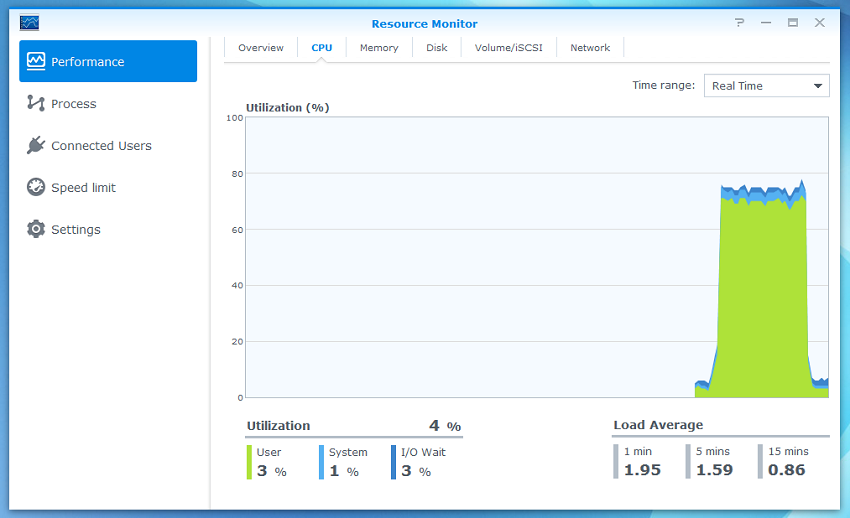 Switching to the DS214play transcoding the same video to an iPad Mini Retina, the CPU usage on the lower-spec model was much more tame at under 40%. A very dramatic difference which for larger movies will only get more profound. The same benefits hold true for the DS415play, though with the additional bays, larger media collections can be supported. 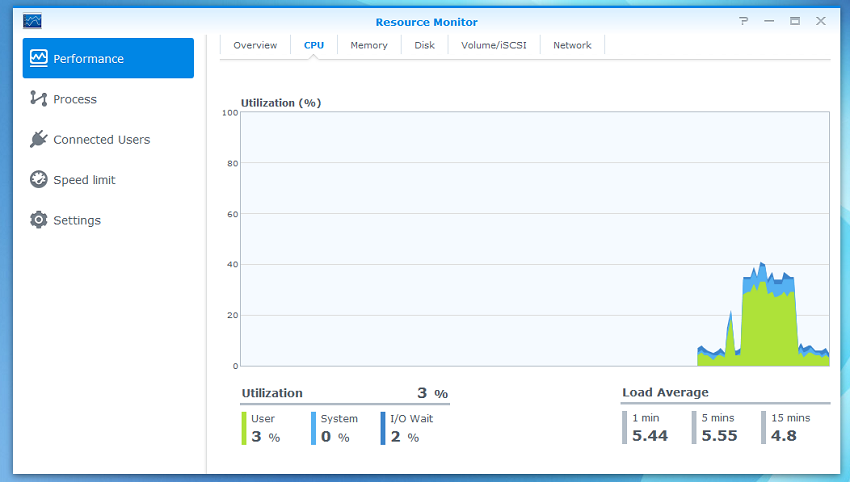 We tested both CIFS and iSCSI performance using two popular 3.5" 5,400RPM hard drives: the WD Red and Seagate NAS models, all 4TB. Both of the drives are suited to operate in NAS environments. We also compared the DS415play to the DS414, another SOHO NAS, which we tested both CIFS/SMB and iSCSI performance with the WD Red 4TB and the Seagate NAS 4TB.

In order to fairly evaluate the performance of the Synology DiskStation DS415play we need an environment that ensures that the DS415play is the I/O bottleneck rather than the network. Therefore this review employs a Lenovo ThinkServer RD240 running multiple Windows Server 2012 VMs in an ESXi 5.1 environment connected via a quad-port Intel i350-T4 NIC through a Netgear ProSafe GS752TXS switch.

Compared to the fixed 16 thread, 16 queue max workload we performed in the 100% 4k write test, our mixed workload profiles scale the performance across a wide range of thread/queue combinations. In these tests, we span workload intensity from 2 threads and 2 queue up to 16 threads and 16 queue. In the expanded 8k 70/30 test, we see the iSCSI drives outperform the SMB drives. The overall top performer was the WD Red iSCSI in the DS414 peaking at 722IOPS. 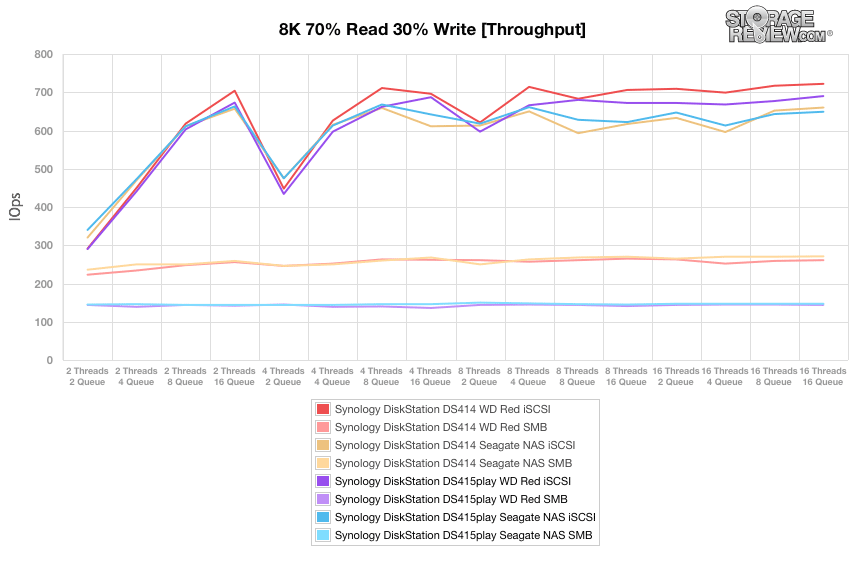 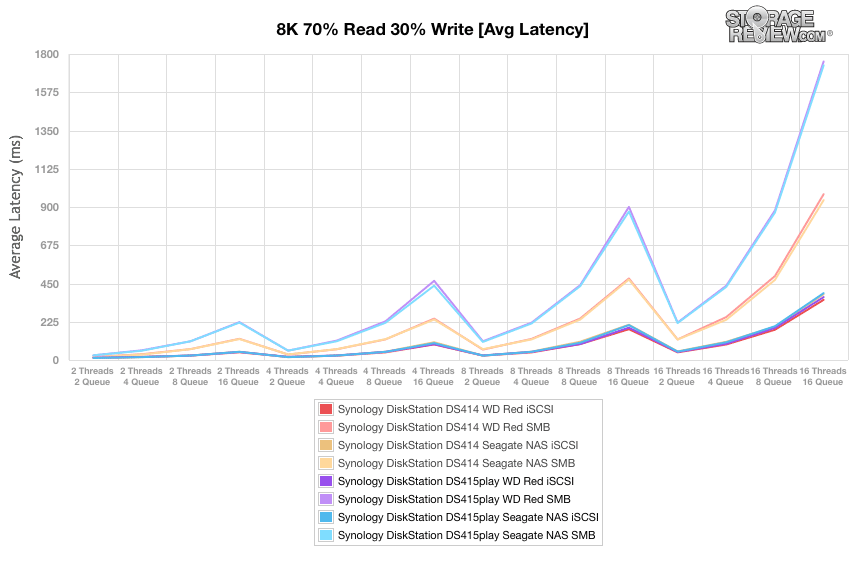 With max latency, we see the DS415play begin to fall back some and the DS414 pull ahead with the WD Red iSCSI in the DS414 having the lowest latency throughout. 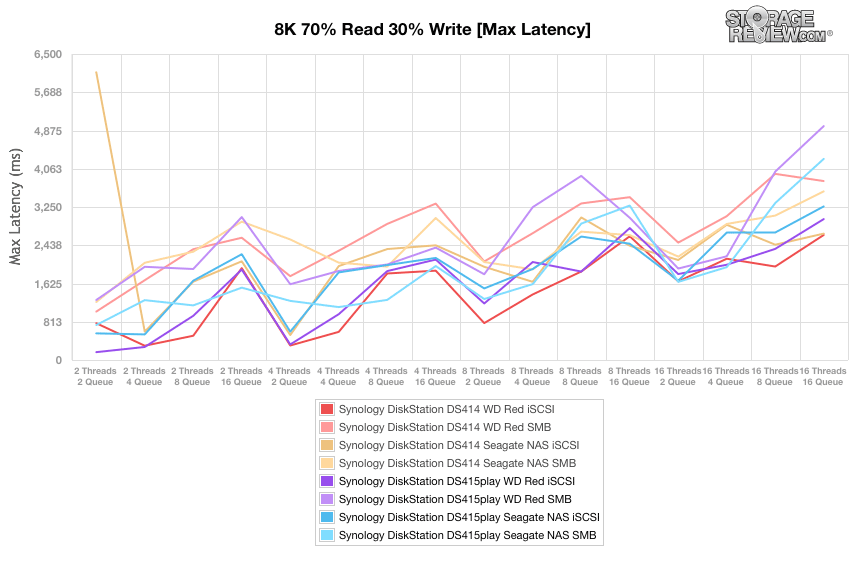 For the entirety of the thread/queue spectrum, we see the DS415play perform better with the WD Red iSCSI in both NAS devices running neck in neck for the lowest latency. 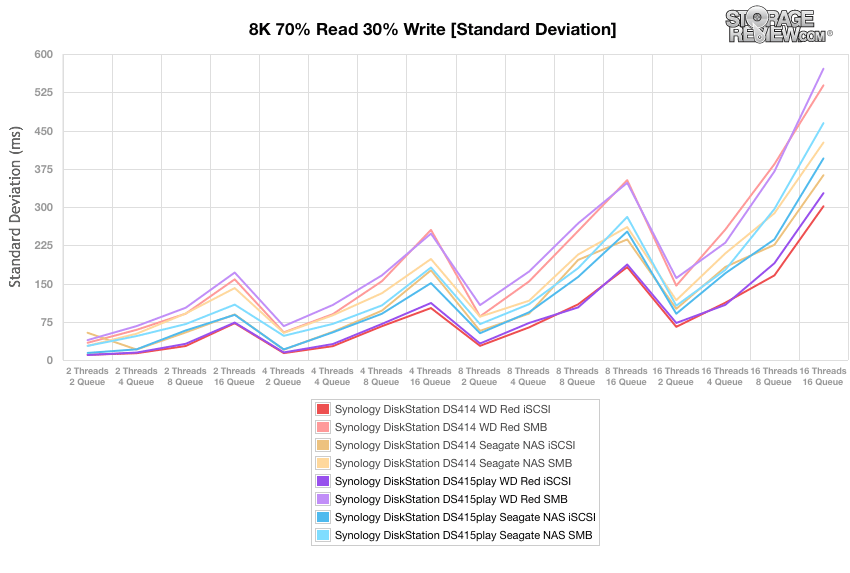 The last test in our small NAS Synthetic Workload testing is the 128k test, which is a large block sequential test that shows the highest sequential transfer speed. Looking at the 128k performance of 100% write and 100% read activity, here we see the read speed of the DS414 crush the DS415play. Both the SMB drives were at the top but the overall top performer was the WD Red SMB with a read speed of 231,342KB/s. The write speeds were closer but the DS414 came out on top again with the top performer being the WD Red iSCSI with a write performance of 114,839KB/s

The Synology DS415play is a 4-bay NAS aimed at home users with large digital media stores. With built in transcoding ability, users can stream the multimedia library in HD through multiple devices and with QuickConnect, they can stream anywhere around the globe. The DS415play comes with a maximum capacity of 24TB, a dual core 1.6GHz processor and 1GB DDR3 RAM.

We measured the performance of the Synology DiskStation DS415play using popular Western Digital Red 4TB and Seagate NAS 4TB hard drives optimized for use in small NAS platforms, and tested it against the Synology DiskStation DS414, a similar NAS without the video transcoding built in. The DS415play performed well in our 4K random workload, we found random 4K access performance to top at 935IOPS read and 545IOPS write. Once we moved to larger file sizes the DS415play began to fall behind its cousin. 8K performances topping at 8,146IOPS read and 7,193IOPS write. Being limited with 1 LAN port only (versus two on the DS414) we found the device to have large-block sequential speeds at 115MB/s read and 108MB/s write (the speeds were over Synology's claim). The thrust with this unit is streaming though. With the dedicated transcoder, video streaming works as expected, without pegging the CPU. Clearly for multiple workloads, Synology offers other systems in the family that would do better, but for those who have a heavy streaming emphasis the DS415play is ideal and offers two more bays than Synology's other NAS with built-in transcoding.

The Synology DS415play is an affordable NAS that gives media enthusiasts plenty of capacity for their files and allows them to easily stream in HD through multiple devices.