The Synology DS923+ is a powerful and expandable NAS solution that is designed for home offices and small businesses. Equipped with the versatile Synology DiskStation Manager (DSM) operating system, it offers a range of features that help you protect, manage, and collaborate on your business data.

The Synology DS923+ is a powerful and expandable NAS solution that is designed for home offices and small businesses. Equipped with the versatile Synology DiskStation Manager (DSM) operating system, it offers a range of features that help you protect, manage, and collaborate on your business data. 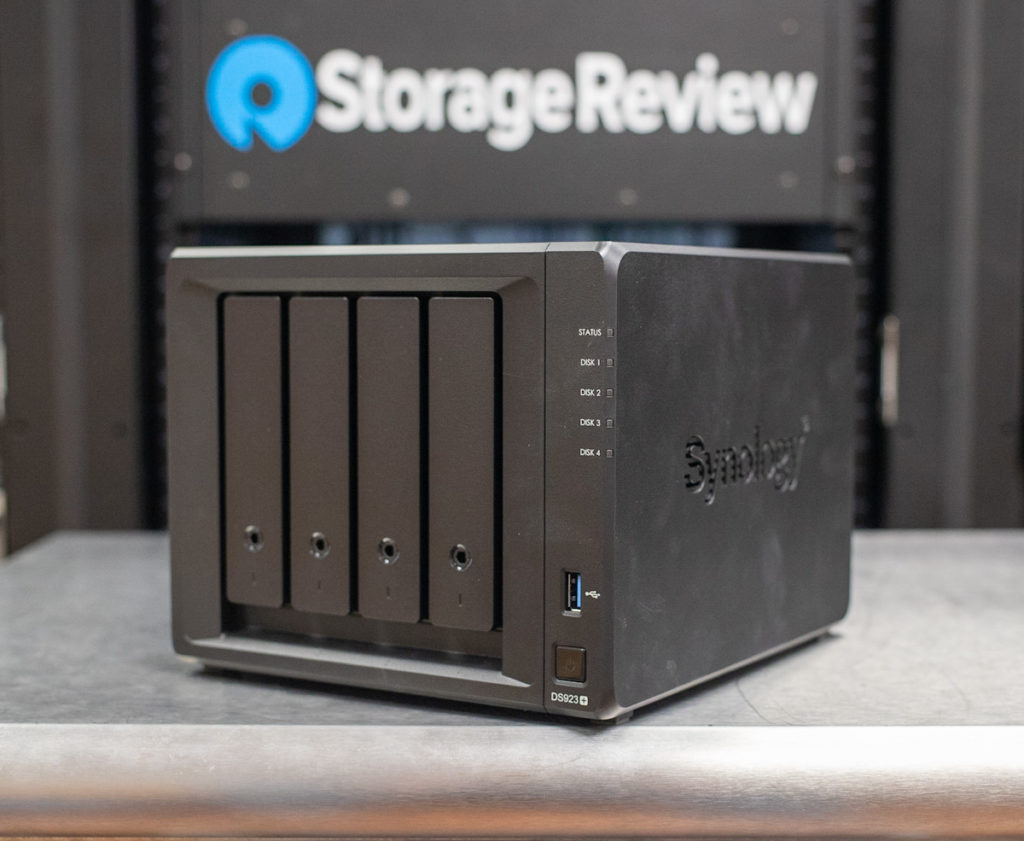 What differentiates this NAS from other 4-bay solutions in the Synology portfolio is its ability to scale with your needs. The 4-bay DS923+ can be easily expanded to accommodate another 5 bays with the addition of a DX517 expansion unit. This lets businesses start small and expand as needed, without having to buy a new NAS.

For those with a performance need, the Synology DS923+ can move past the onboard 1GbE connections by upgrading to 10GbE networking. The 10GbE NIC is a proprietary Synology design, but it is tiny and installs in a few seconds, requiring the removal of two screws. We have an install video and a deeper look at the Synology 10GbE NIC. 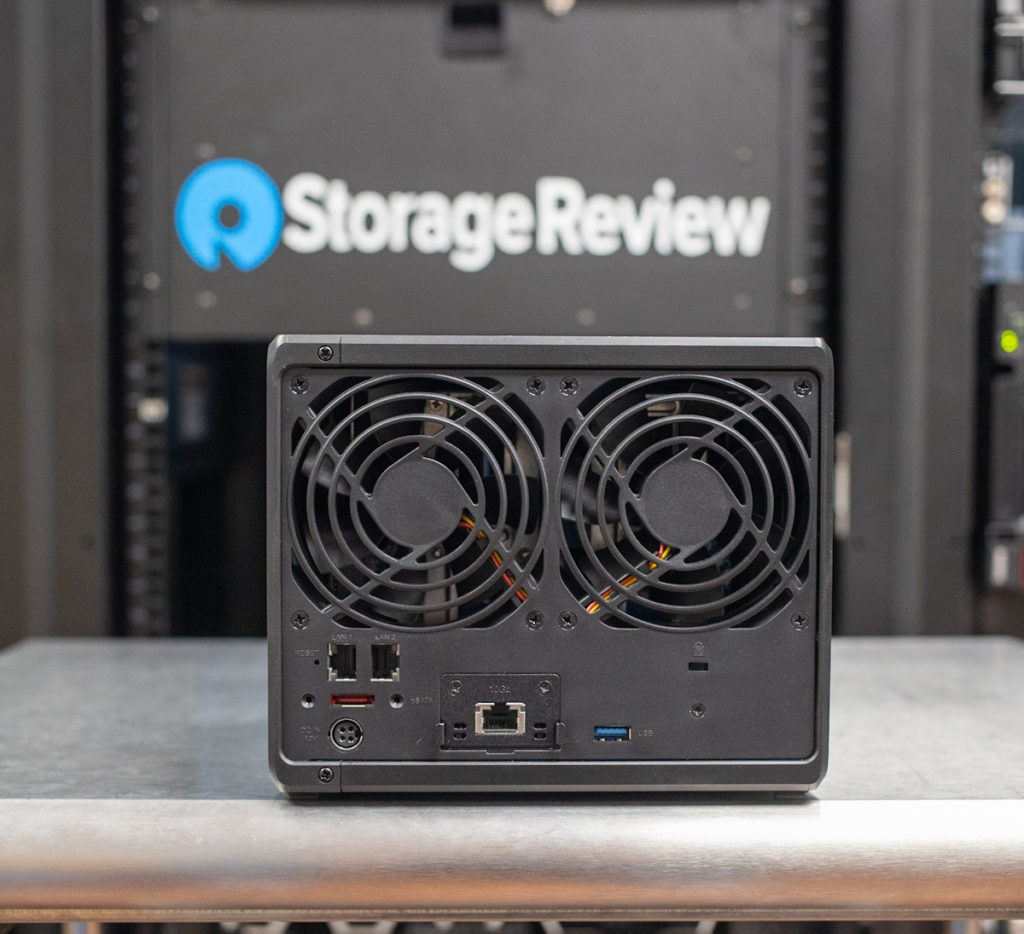 One of the most notable changes in the DS923+ specifically is Synology has added support for flash poos for the M.2 NVMe SSD drives. The DS923+ has two built-in slots on the bottom of the chassis for NVMe SSDs. The rub however is this feature only supports Synology SSDs which are limited in capacity and at this time, this feature only works on this NAS.

The Synology DS923+ carries a street price on Amazon of $599 diskless.

Synology is popular in large part because of its software. DSM is very easy to configure and use, and Synology offers a very deep set of applications that can be installed with a click. In addition to third-party apps, Synology also offers a deep set of its own, to support a number of business use cases like:

For our testing, we configured the Synology DiskStation DS923+ in RAID6 using 4x WD Gold 22TB HDDs. We also leveraged two Synology 480GB SSDs for testing in RAID1 volume now that it is supported. 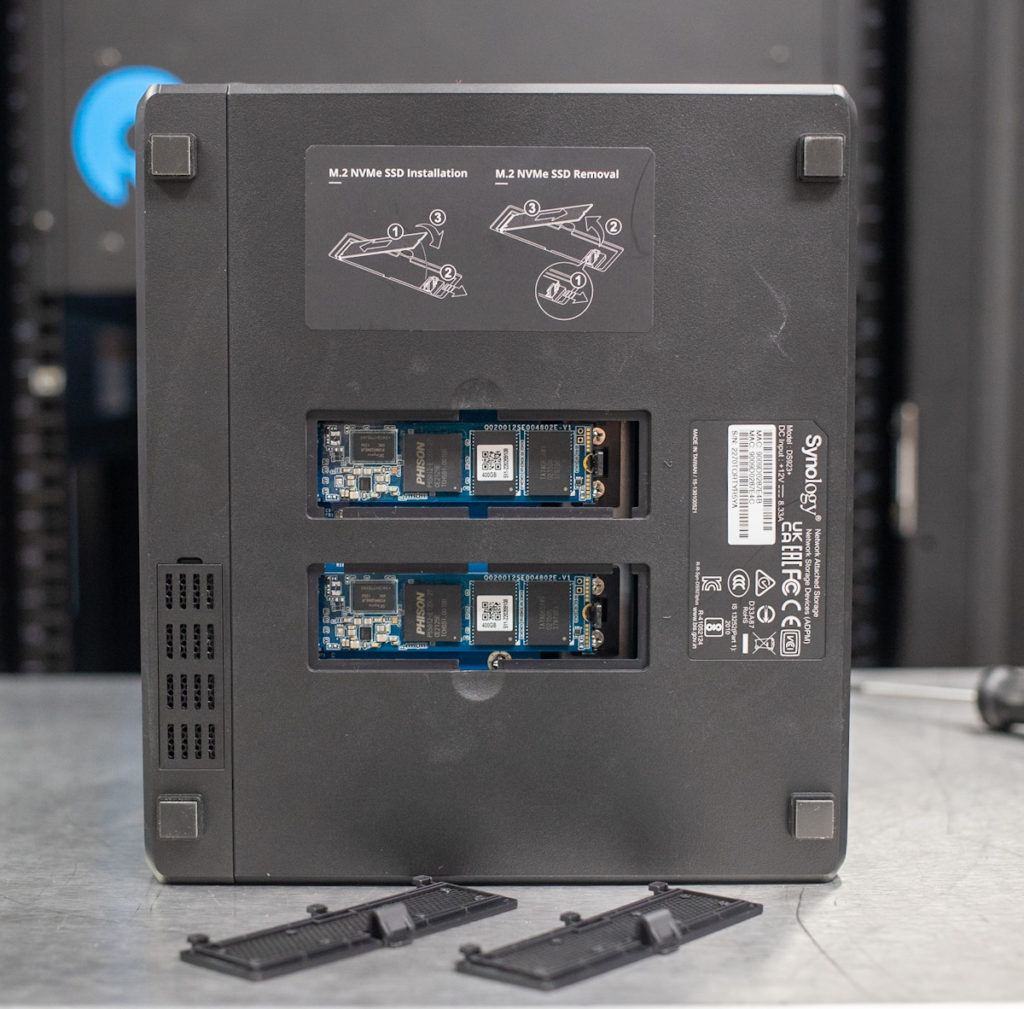 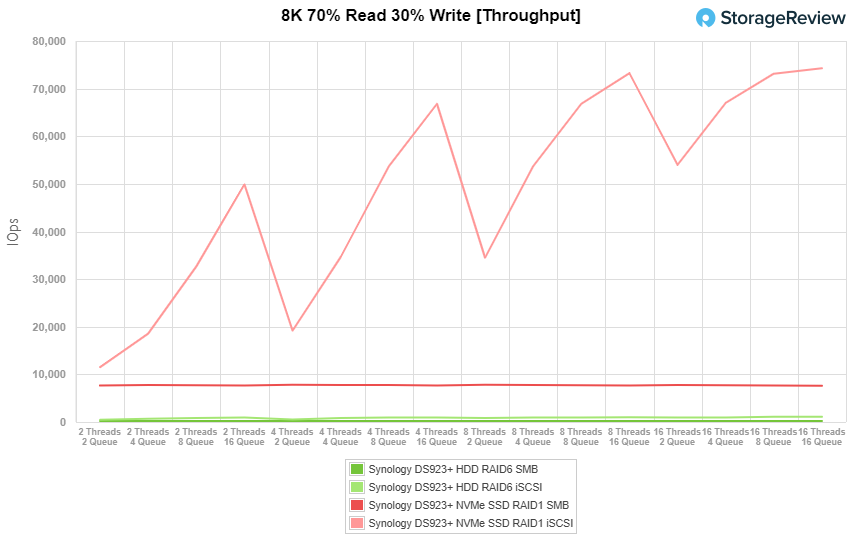 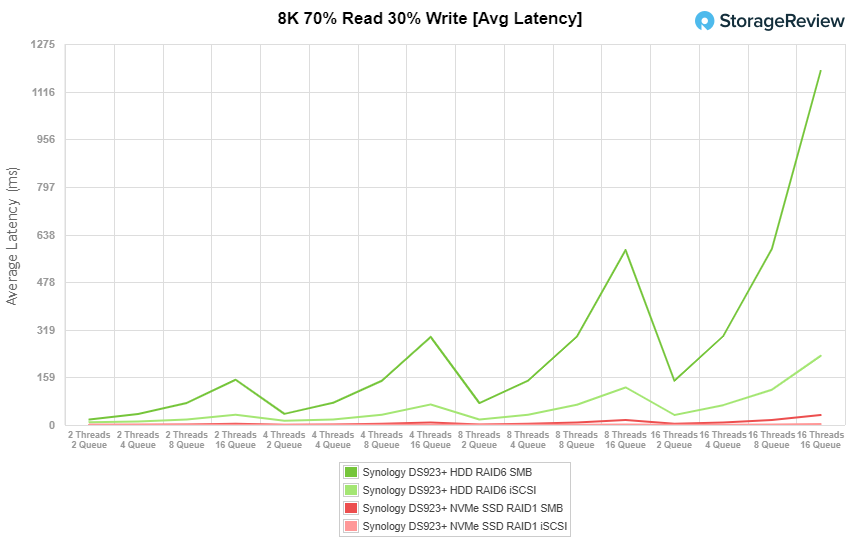 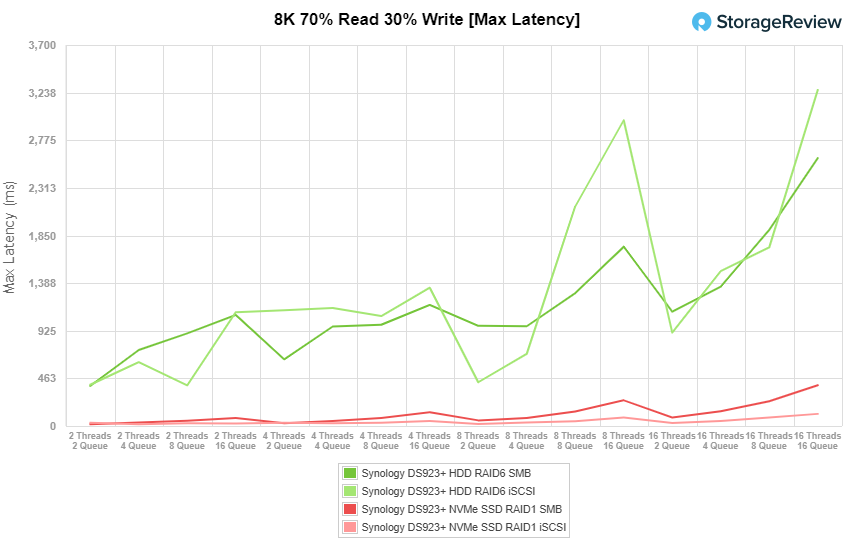 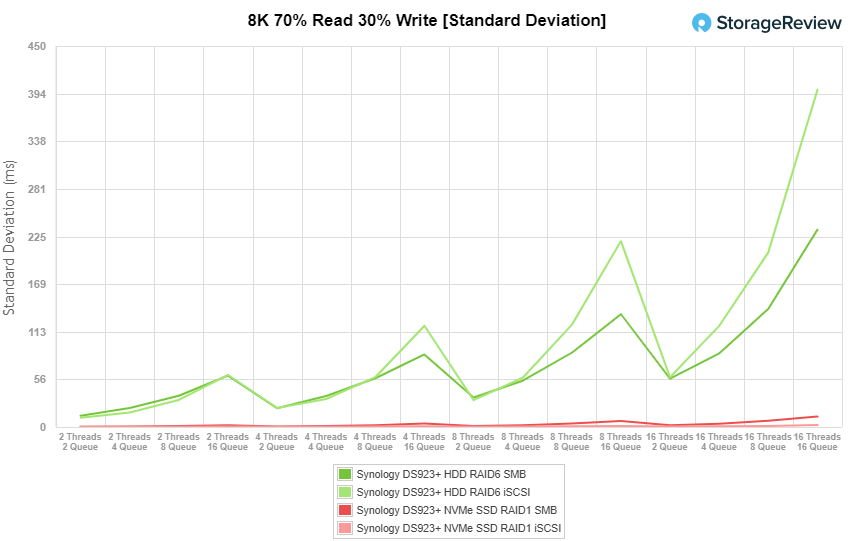 The Synology DS923+ is a 4-bay NAS designed primarily for small businesses and other edge deployments. It is equipped with Synology DSM and offers a range of features for data sharing, synchronization, backup, and surveillance. The bonus for this unit is expandability, it supports five more drives with the DX517 expansion unit. The DS923+ also has the option to upgrade to 10GbE networking and add M.2 NVMe SSDs two through the two slots on the bottom. 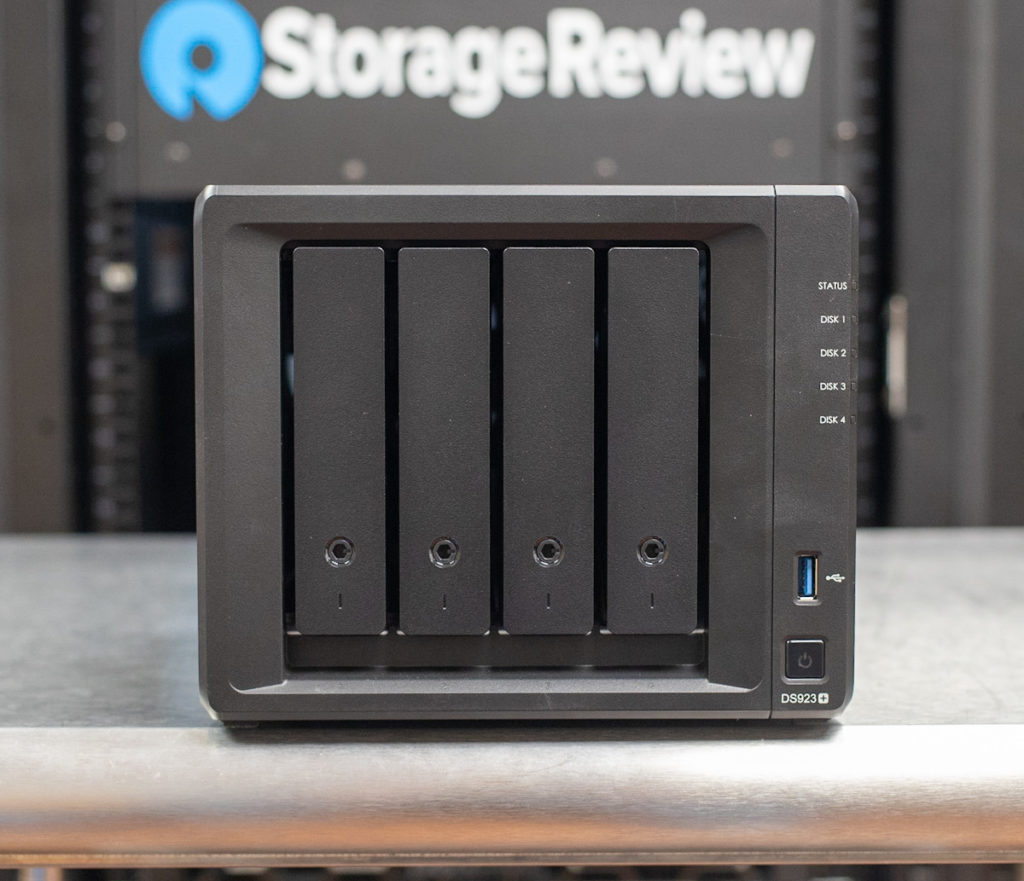 The NVMe SSD slots also can be used for pools in this unit, a first for Synology, prior to the DS923+ these drives could only be used as a cache. This feature however is extremely limited as it only supports Synology NVMe drives, which are capped at 480GB at this time. We love the step forward from Synology here but are very disappointed in the execution. As such, this feature is still very limited at this time. 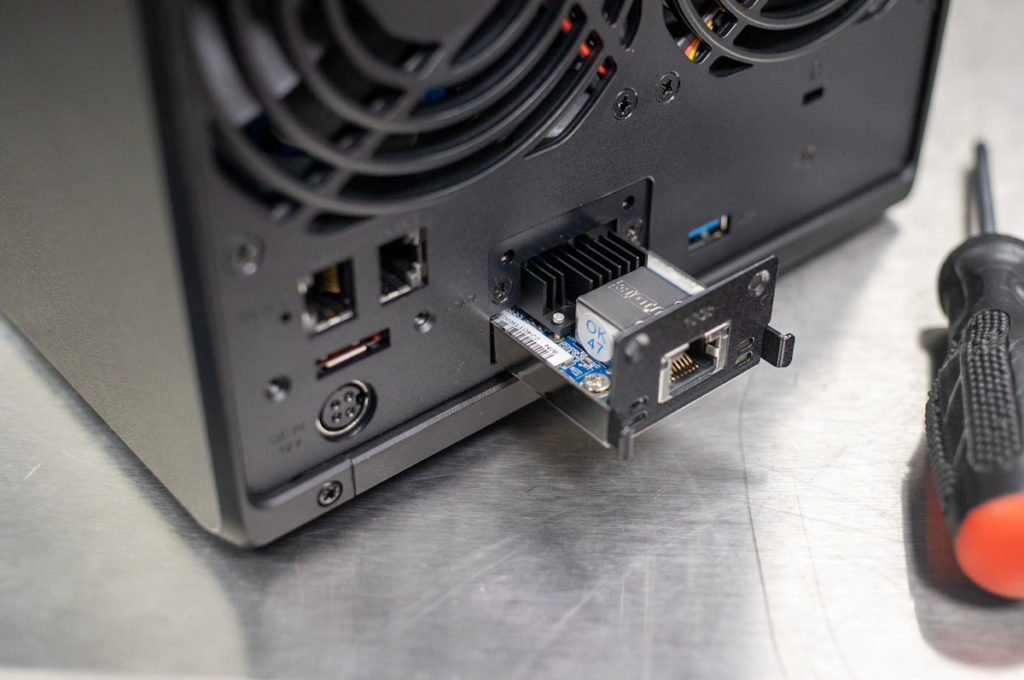 The Synology DS923+ is a flexible NAS that offers a range of features for data sharing, synchronization, backup, and surveillance. DSM and the deep application library continue to be the best Synology benefits. They’ve also made progress with this unit to unlock the benefits of flash, but the execution is incomplete. 10GbE should arguably be onboard as well, but to be fair, Synology is balancing price/performance in this unit. Still, the DS923+ is a modest progression and will solve a lot of SMB problems.