The Synology RackStation RS3614xs+ is a performance-driven network attached storage solution with 12 front-mounted hot-swappable 3.5-inch bays that is designed for businesses that require reliability and high uptime as well as a comprehensive set of business applications. Synology indicates that their RS3614xs+ simplifies data management, optimizes virtualization environments, and can rapidly expand storage capacity without having to worry about a time-consuming setup and maintenance.

The Synology RackStation RS3614xs+ is a performance-driven network attached storage solution with 12 front-mounted hot-swappable 3.5-inch bays that is designed for businesses that require reliability and high uptime as well as a comprehensive set of business applications. Synology indicates that their RS3614xs+ simplifies data management, optimizes virtualization environments, and can rapidly expand storage capacity without having to worry about a time-consuming setup and maintenance.

Under the hood lays an Intel Xeon E3 Quad Core 3.3GHz processor with 8GB of DDR3 ECC RAM, the latter of which is expandable up to 32GB, enabling the RS3614xs+ to boast over 3,600MB/s in throughput and 439,000 IOPS. The RS3614xs+ is also scalable up to 216TB (using 36 HDDs with Synology RX1214/RX1214RP expansion units) and is equipped with dual PCIe slots for dual-port 10GbE NIC support. In addition, its SSD cache technology increases throughput in situations where the workload needs a little more performance.

Like all Synology NAS solutions, the RS3614xs+ is powered by the extensive DiskStation Manager (DSM) software and comes with applications and features that are designed explicitly for larger-scale businesses. This includes seamless integration with existing business network environments using AD and LDAP directory services without having to recreate user accounts. Additionally, with its Windows ACL support, it offers fine-grained access control with effective privilege settings, which makes the RS3614xs+ fit into current infrastructures without much hassle. The RS3614xs also features Advanced Encryption Standard (AES) on shared folders with hardware acceleration as well as continuous data protection through snapshots of shared folders.

Synology RS3614xs+ is backed by a 5-year limited warranty and carries a street price of around $4900 without disks.

The Synology RackStation RS3614xs+ is a 2U rack-mounted NAS designed to meet the needs of medium to large businesses. It is equipped with 12 front-mounted hot-swappable 3.5-inch bays, which should meet Synology’s compatibility list (these include both 3.5-inch and 2.5-inch HDDs and SSDs).

The design and look of the RS3614xs+ is similar to most of the constituents of the RackStation line, which are built for reliability and ruggedness with the ability to withstand moves, installations, and general every day wear.

Apart from its 12 drive trays, the front panel is home to several LEDs including the Status (which Displays the status of the system), Alert (which displays warnings regarding fan or temperature) and Disk (which displays the status of installed drives) indicators. Also located on the front panel are the power and “beep off” buttons, the latter of which deactivates beep sounds when malfunctions occur.

The back panel of the RS3614xs+ also has a familiar Synology layout, which includes 4x LAN ports, 2x USB 2.0 ports, 2x USB 3.0 ports, expansion ports and the two PCIe expansion slots. Visible on the left side are the twin power supplies.

Inside the chassis is the Intel Xeon E3 Quad Core 3.3GHz processor with 8GB of DDR3 ECC RAM (expandable up to 32GB). 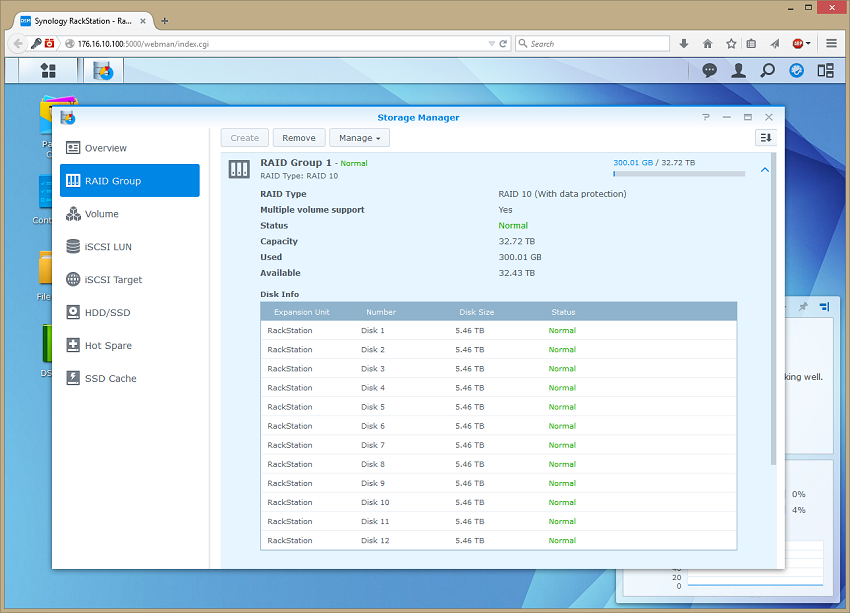 The RS3614xs+ is compatible with the latest version of DSM (5.1), which has introduced peerless bidirectional sync, catering to businesses that need to share pools of data for collaborative work. In addition, files, file-types, and selected folders can be synced with another RackStation without intermediating hardware and businesses can now share common assets with Cloud Station, which is included in the DSM package. Users can download and install add-ons through the Package Center.

We will be testing the Synology RackStation RS3614xs+ with the following hard drives. We will also be testing with the device with iSCSI block-level and CIFS file-level tests:

Our enterprise benchmark process preconditions each device into steady-state with the same workload the device will be tested with under a heavy load of 16 threads with an outstanding queue of 16 per thread, and then tested in set intervals in multiple thread/queue depth profiles to show performance under light and heavy usage. Since many shared storage platforms reach their rated performance level very quickly, we only graph out the main sections of each test.

In the first of our enterprise workloads, we measured a long sample of random 4k performance with 100% write and 100% read activity using the CIFS protocol. As expected, the Intel S3500 SSDs posted the best read performance and write performance (by a serious margin) measuring 23,716 IOPS and 129,045 IOPS, respectively. The Seagate Enterprise NAS and Enterprise Capacity v4 showed 669/642 IOPS read and 5,514/7,090 IOPS write.

Moving to our latency segment with a load of 16T/16Q, our CIFS file-level test showed similar performance on our charts. Here, the Intel S3500 SSD showed great performance inside the Synology RackStation, with an average latency of only 10.79ms read and 1.98ms write. The Seagate Enterprise NAS drive offered lower read latency while the Enterprise Capacity drive offered lower write latency.

In iSCSI, the S3500 showed 73.7ms read and only 38.6ms write for its maximum latency. The Seagate HDDs boasted higher maximum write latency, though showed much lower read latency (compared to CIFS).

Measuring the RS3614xs+’s standard deviation for the 4k latency shows how consistent the latency results were within each of the categories during our benchmarks. Using the CIFS file-level test, the Intel S3500 SSD showed an impressive 9.01ms read and 3.05ms write, while RS3614xs+ populated with the Seagate drives showed higher performance with the Enterprise Capacity v4 HDDs.

Using the CIFS file-level test of the same benchmark, performance was improved significantly especially with the HDDs. While the RS3614xs+ populated with the Intel SSDs remained the top performer, the Seagate Enterprise drives boasted read performance almost on par with the S3500.

The next four charts are based on a protocol consisting of 70% read operations and 30% write operations with an 8k transfer size. The workload is then varied from 2 threads and a queue depth of 2 up to 16 threads and 16 queue. During our CIFS file-level test, the 8k 70/30 benchmark showed the Intel drive showed impressive performance once again, hovering around the 27K IOPS mark. As shown below, the two HDD configurations showed almost identical performance at this scale, with the Enterprise Capacity v4 taking a slight lead. 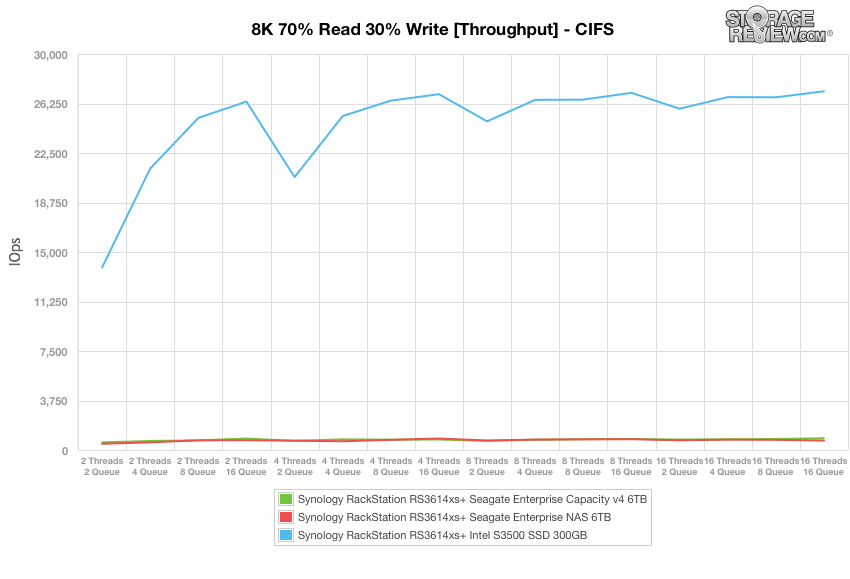 Results were mirrored during our iSCSI tests, though at a much higher performance level.  Here, the Intel S3500 drive posted roughly 86,760 IOPS by 16T/16Q. 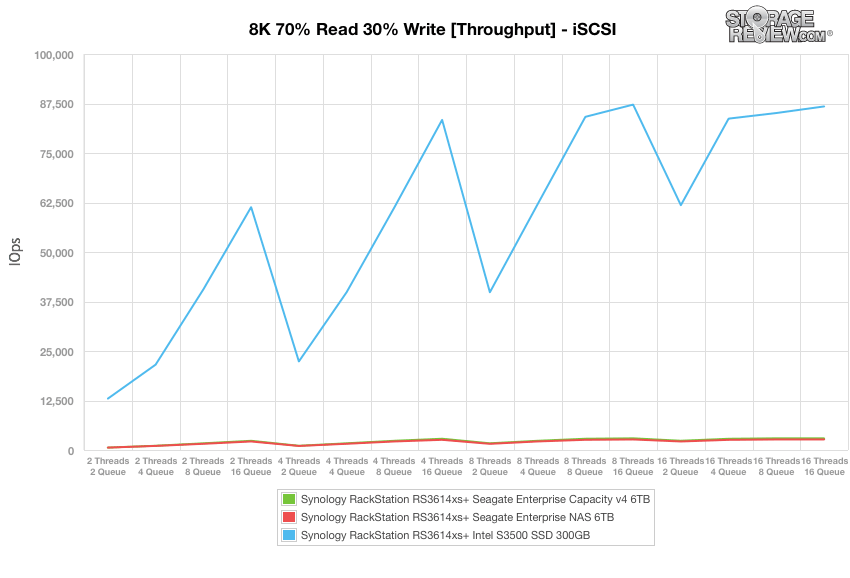 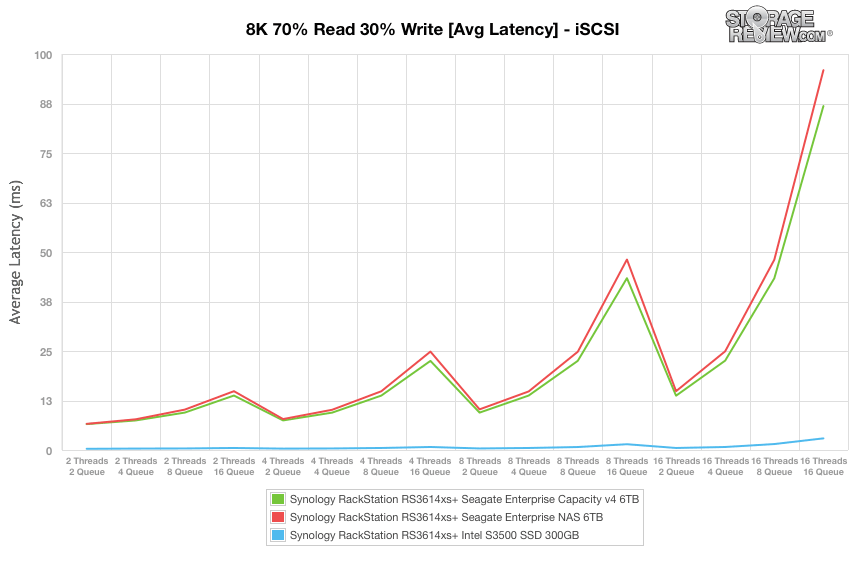 When looking at average latency with the CIFS block-level test, results were higher in latency. The RackStation populated with the Intel drives showed an average latency of 9.41ms by the end of our benchmark. The Seagate Enterprise Capacity v4 and Enterprise NAS posted 287.03ms and 356.72ms by 16T/16Q. 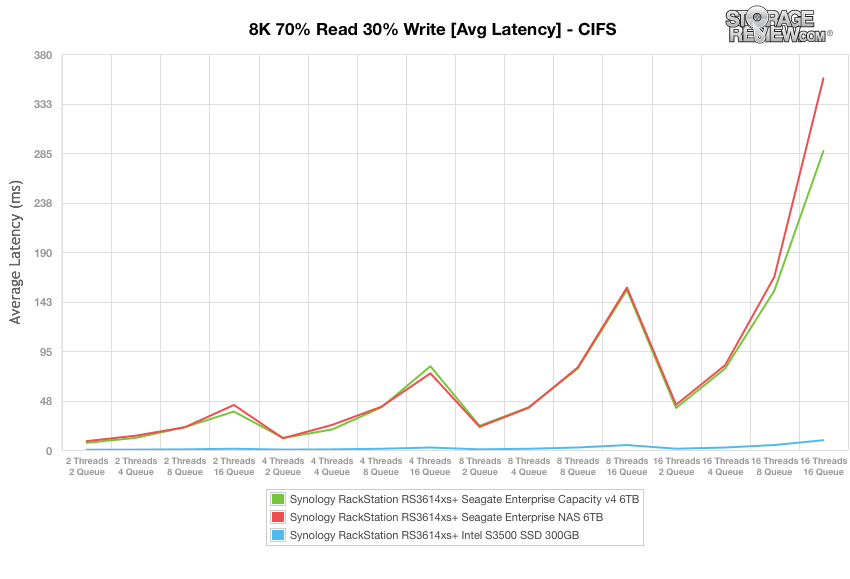 Measuring maximum latency values can sometimes reveal issues that are not always evident in our above average latency results. In iSCSI, performance results for the Intel drive configuration showed a maximum latency of only 37.18ms, which occurred at 16 Threads 2 Queue. 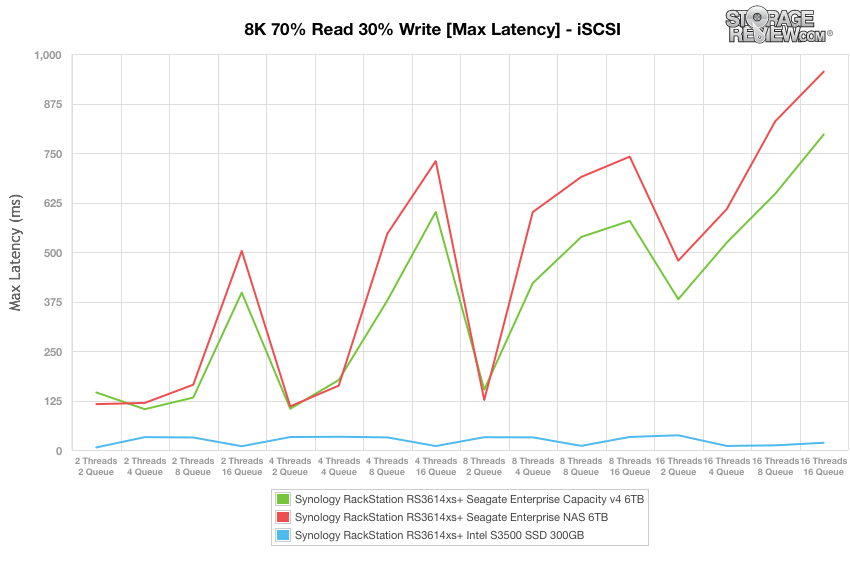 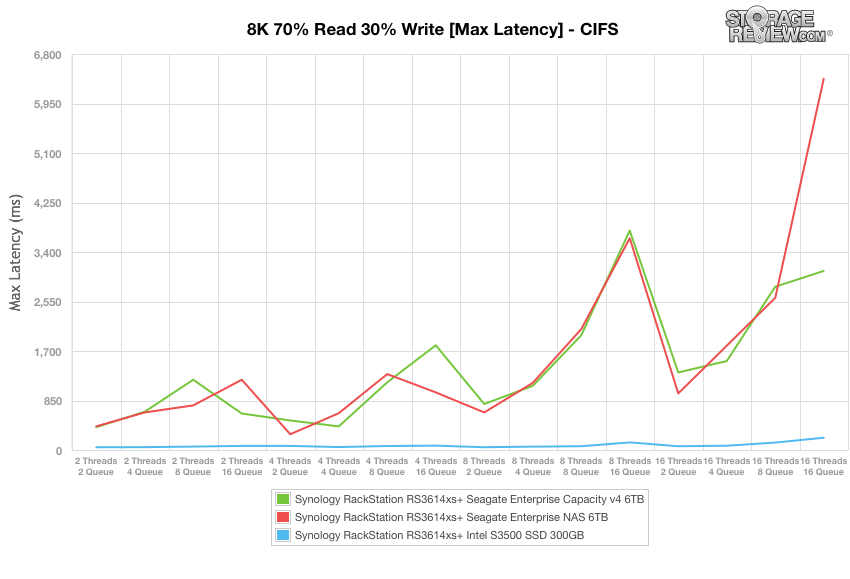 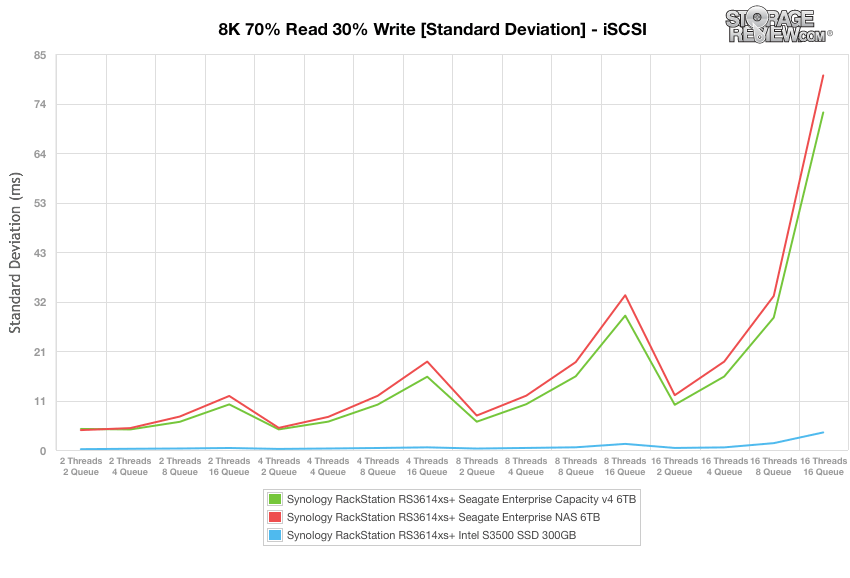 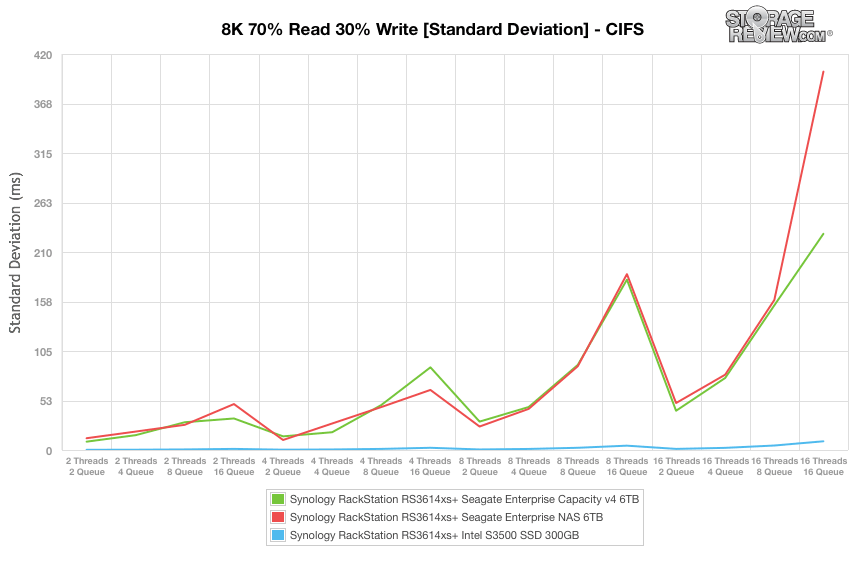 The CIFS test showed massive gains in both read and write speeds. As was also the case with our 8K test, the Seagate HDDs posted results almost on par with the SSD comparable.

Synology’s RS3614xs+ is a complete offering for SMBs and branch/remote offices with its great performance and rich feature set. Using 36 HDDs coupled with the Synology RX1214/RX1214RP expansion shelf and its 12 front-mounted hot-swappable 3.5-inch bays, the RS3614xs+ can scale up to 216TB of raw capacity. If performance is more the issue at hand, the NAS supports SSD volumes and can also leverage SSDs as a cache. Additionally, the RackStation is equipped with dual PCIe slots that support dual-port 10GbE NICs for increased throughput.

To measure the performance of the RS3614xs+, we implemented both an all-flash SSD and two HDD configurations with the Intel S3500, Seagate Enterprise NAS HDDs, and a 4th generation Seagate Enterprise Capacity HDDs. When looking at the performance of the RS3614xs+, our 4k results show how fast the platform can operate when equipped with SSDs, topping 128k IOPS read and 180k IOPS write. In our 8k random mixed workload tests, we saw strong performance as well, topping out at just under 87k IOPS from four iSCSI LUNs. Switching to 8k sequential performance tests, we measured the performance of 4 CIFS shares at over 130k IOPS for our SSD and HDD configurations alike, and around 180k write for the SSD config or 100k IOPS write for the HDDs.

Looking at large-block sequential performance in our 128k test across four 10GbE ports, we saw bandwidth from the RS3614xs+ top out at 2.5GB/s write with SSDs or 2.2GB/s with HDDs. Read bandwidth maxed out around 2.2GB/s for both SSDs and HDDs. While the platform supports two dual-port 10GbE cards for up to 4GB/s of bandwidth, in most real-world settings a single dual-port card would suffice for optimum performance.

Ultimately the Synology RS3614xs+ offers quite a bit of flexibility in a 2U rack form factor. DSM is easy to deploy and manage, offering enough features from Synology directly and via third party apps, to solve most SMB needs. With SSDs and 10GbE, the system has more upside than most will need. While not needed for most use cases, it’s nice to know it’s there should the need arise. The only real knock this system has is no support for SAS drives, but with plenty of SATA enterprise HDDs and SSDs available, that’s not a huge deal for most.

The Synology RackStation RS3614xs+ is a 2U rack-mount NAS designed to meet the needs of the SMB or branch/remote office data center. Synology offers comprehensive software features as well as support for SSDs and optional 10GbE, which can drive well over 2GB/s read/write throughput.