The Samsung Portable SSD T1 is a storage device specifically designed for both enthusiasts and travelling professionals looking for both high performance and ultra-mobility. At a glance, it certainly looks like a unique portable storage solution, as this sleek looking device is incredibly small and built slightly larger than a business card (71mm long by 53.2mm wide).  If you have some space in your wallet, it could likely fit there. And, with its use of the most modern V-NAND technology, this SSD device also packs a serious punch in the performance category.

The Samsung Portable SSD T1 is a storage device specifically designed for both enthusiasts and travelling professionals looking for both high performance and ultra-mobility. At a glance, it certainly looks like a unique portable storage solution, as this sleek looking device is incredibly small and built slightly larger than a business card (71mm long by 53.2mm wide).  If you have some space in your wallet, it could likely fit there. And, with its use of the most modern V-NAND technology, this SSD device also packs a serious punch in the performance category. 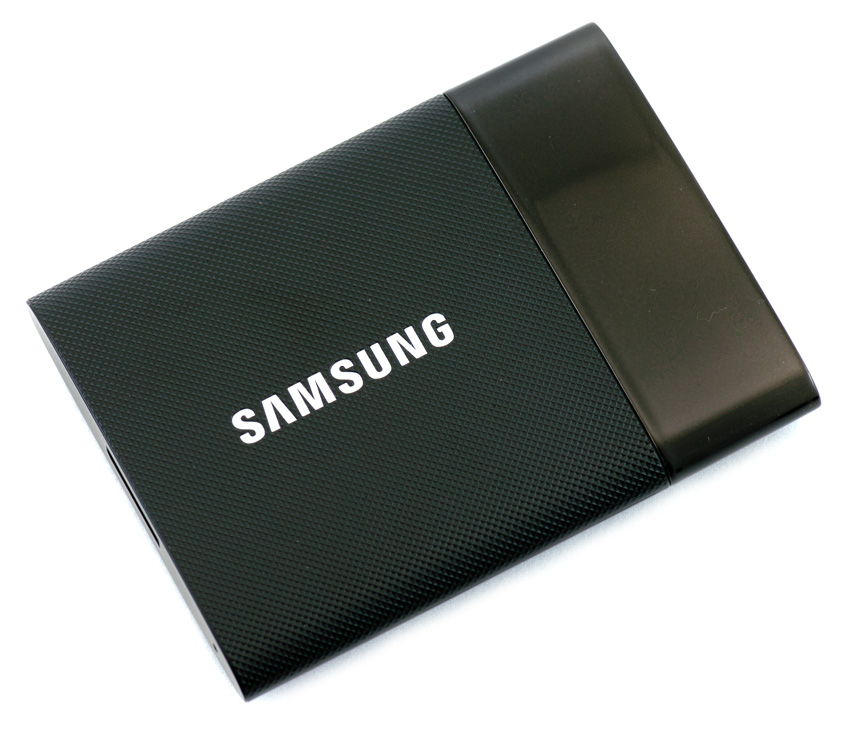 Not only is this device extremely small, Samsung has given the T1 a nice sturdy build, which is a paramount for users always on the go. Couple this with its zero moving parts (allowing it withstand 4x more shock and 40x more vibration than HDD storage solutions) and its resistance to high temperatures and you have a peace of mind that your data is pretty safe. In addition, the Portable SSD T1 also uses an AES 256 bit encryption algorithm for increased security, allowing users to access their data with one password

On the performance end of things, with its V-NAND technology, its obvious that the T1 portable SSD is designed for performance-heavy applications. As such, Samsung quotes read-write speeds of up to 450MB/s, results which are aided by TurboWrite Technology. These claimed speeds are certainly desirable when transfers files like movies, photos, or applications on the go.

Samsung’s security software is located on the portable SSD itself. All we had to do is simply load the executable file on the SSD and following the instructions to secure the Samsung Portable SSD T1. Set up was quick, easy, and painless. 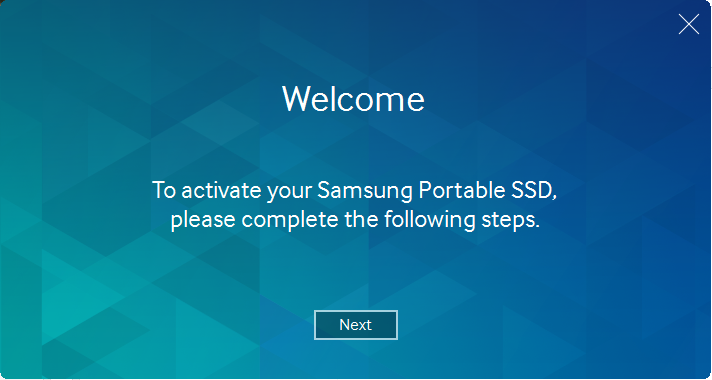 You will be simply prompted to give your Portable SSD T1 a name. 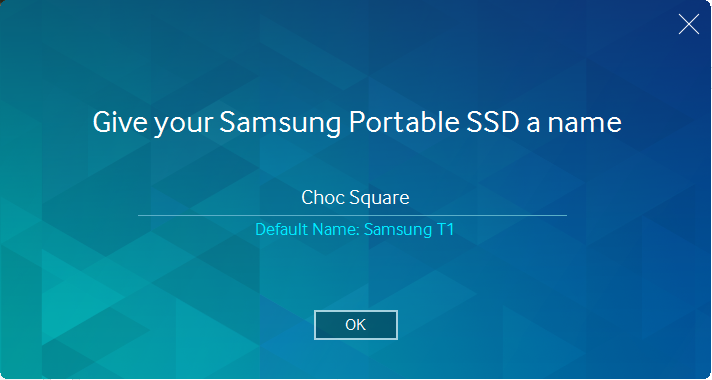 If you decide to use the password protection feature, be sure to never forget it. As Samsung indicates below, if you lose this information, you will lose all of your data since you will have to attain a factory reset tool from support to use the SSD again. As such, if you are planning on having important data on the portable SSD, be sure to use a secondary backup system. We would have liked to see an additional measure to make sure users can restore their data in the event that this issue arises. 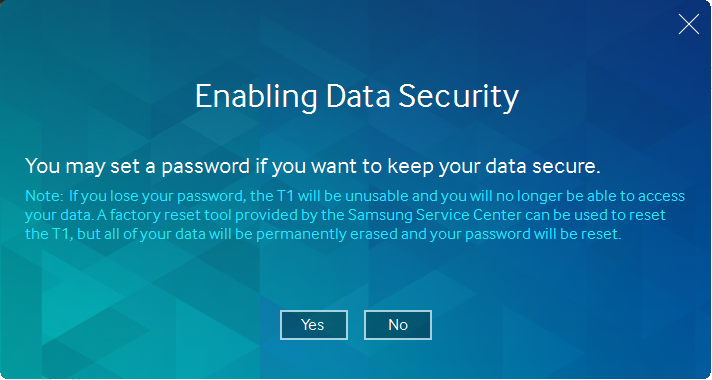 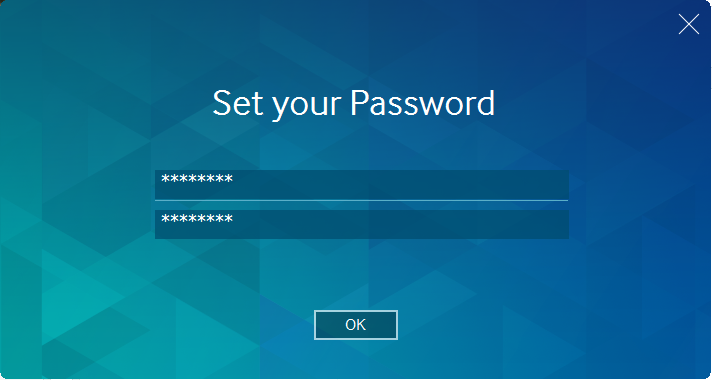 You will be given a summary screen of the short installation process and then you are done. As you can see, this was a very simple setup. 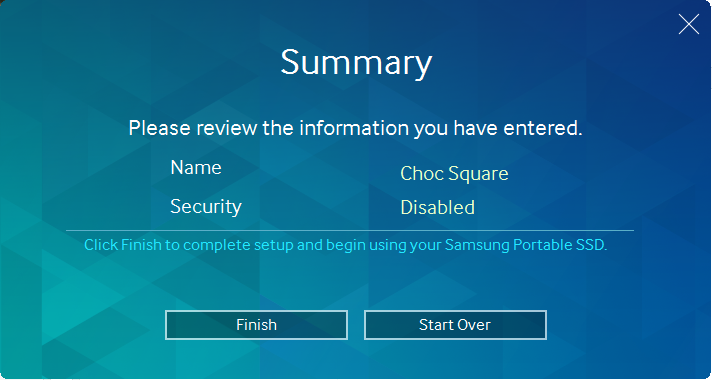 As we indicated above, the Samsung Portable SSD T1 is quite unique looking.  Its enclose is a slick looking black plastic, with most of it covered by a texturized cross-stitching. It’s very cool to look it. In addition, the device is roughly the size of a Ghirardelli chocolate square inside the wrapper (see below), though a bit thicker, making it portable in virtually any scenario. It’s also incredibly light. These are vital features for professionals or general consumers who do an extensive amount of traveling, as they can simply slip this in their pocket (or sometimes even a wallet) while walking around an airport or driving around in a car.

Don’t be fooled by its incredibly small design though, as this little guy feels very solid in when handled. It is also shock resistant up to 1500G/0.5ms and features Dynamic Thermal Guard, which Samsung indicates will protect the drive in very high temperatures. This handy functionality activates when it detects extreme temperature conditions.

The T1 has very little information on the drive itself, with only the Samsung branding on the front. The USB 3.0 connector is located on the side of the drive, where it is only 2mm thick.

We will be comparing the Samsung Portable SSD T1 to the Brinell Drive SSD.

The Samsung Portable SSD T1 is the ultimate mobile SSD solution for consumers and professionals who put just as much importance on design as they do performance. The tiny build of this external drive is by far one of the smallest we have seen in a portable SSD (roughly the size of a credit card), though it still feels solid when gripped in our hands.  And, with its zero moving parts, it can withstand 4x more shock (1500G/0.5ms) and 40x more vibration than HDDs. It is a truly unique storage solution.

When we put the Samsung Portable SSD T1 through the gauntlet of our tests, it revealed fantastic performance. On our HP Z620 workstation, the drive boasted read performance above its specs, measuring 487MB/s, while write performance measured 469MB/s. Overall, the Samsung Portable SSD T1 is a serious performer, although like all portable SSD solutions, the Samsung drive comes at a very high price tag (the 1TB model goes for a whopping $600). Compared to other drives of this type, this actually isn’t too surprising and not that bad; however, this premium price might curb mainstream consumers away.

The Samsung Portable SSD T1 is an incredibly portable storage solution with a slick premium build and great performance to boot; however, its price tag will limit its addressable audience.