The Toshiba Canvio Connect is a lifestyle portable storage device that interfaces over USB 3.0 and has capacity up to 2TB while simultaneously offering significant backup tools and remote access to digital content. The Canvio Connect is Toshiba’s latest addition to the Canvio line of drives which are designed for everyday media and file storage applications. It replaces the existing the Canvio USB 3.0 in the series which falls in the middle by offering backups not found with the Basics model, but not the high-end automatic backups found in the company’s highest-end portable drive. The Canvio Connect features several enhancements over the previous generation. While the existing model tops off at 1.5TB, the new Connect can hit 2TB. Additionally, Toshiba has now integrated the USB interface onto the circuit board, replacing the bridge connector and thus shortening the Canvio Connect’s length by a third.

The Toshiba Canvio Connect is a lifestyle portable storage device that interfaces over USB 3.0 and has capacity up to 2TB while simultaneously offering significant backup tools and remote access to digital content. The Canvio Connect is Toshiba’s latest addition to the Canvio line of drives which are designed for everyday media and file storage applications. It replaces the existing the Canvio USB 3.0 in the series which falls in the middle by offering backups not found with the Basics model, but not the high-end automatic backups found in the company’s highest-end portable drive. The Canvio Connect features several enhancements over the previous generation. While the existing model tops off at 1.5TB, the new Connect can hit 2TB. Additionally, Toshiba has now integrated the USB interface onto the circuit board, replacing the bridge connector and thus shortening the Canvio Connect’s length by a third. 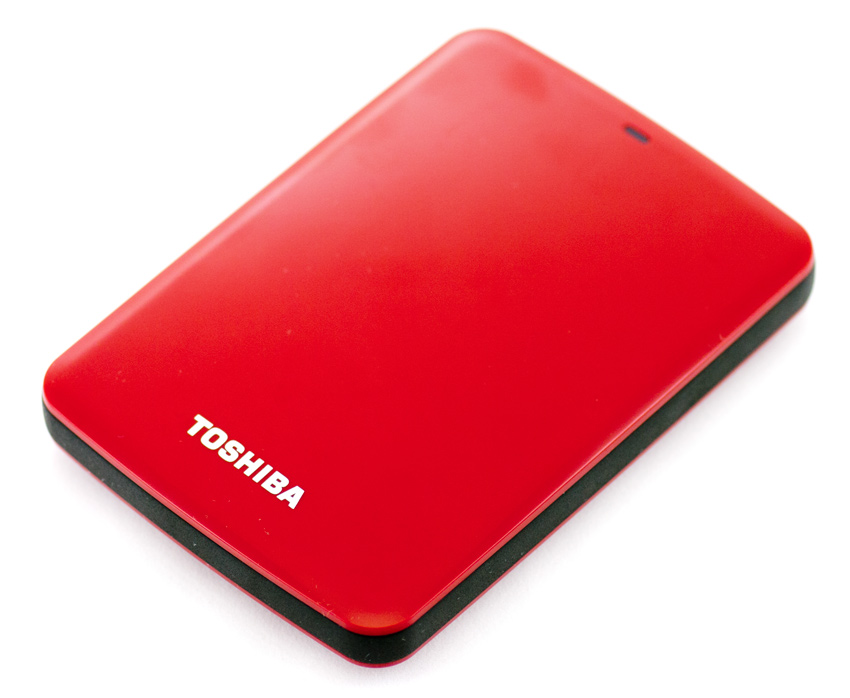 The Connect’s bread and butter is that it offers advanced features for a portable consumer drive at a value price point including remote access, content sharing and scheduled backups. The Connect does this and more with its 3 free pieces of included software: Pogoplug (remote access via the app and 10GB of free cloud storage), NTI Backup Now EZ 2010, and Muvee (for media editing). The Toshiba Canvio Connect is compatible with Windows 7 and 8 as well as Mac OS X. From the outset, the device is preformatted NTFS for Windows operating systems, though it does include a Mac driver to get the device up and running for Apple OS users.

The Toshiba Canvio Connect uses a design that is fairly similar to the existing Canvio designs. The Canvio line offers a variety of colors, and the Connect itself comes in 5 flavors. Our 750GB Connect is compact and has a red plastic enclosure with a smooth black stripe around the middle. The case should hold up well to daily use at home or on the go as needed. 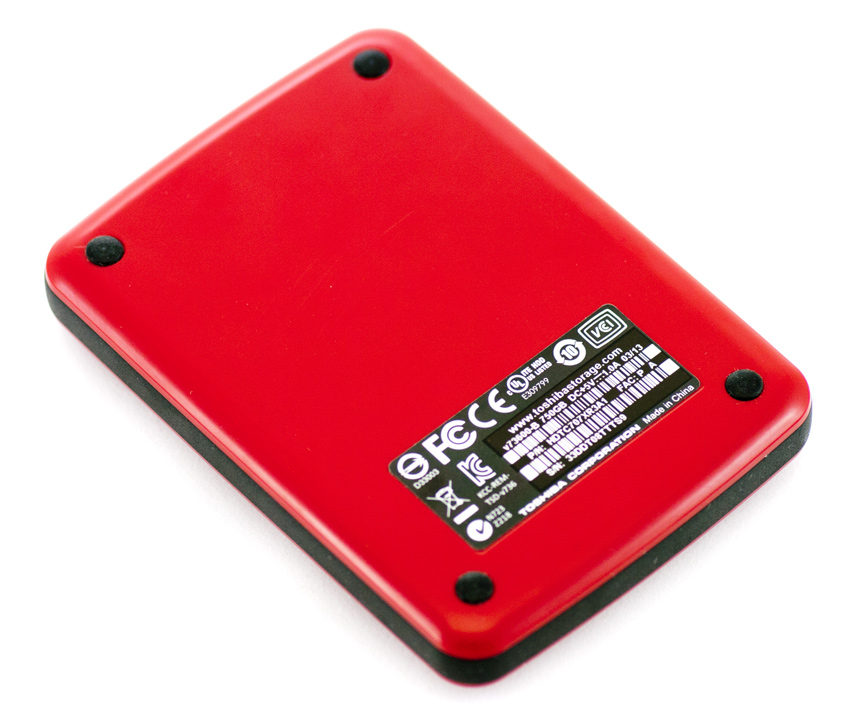 The top of the Connect has Toshiba branding on one end and an LED indicator on the other end. The bottom of the drive has four rubber feet for friction. There is also a product label on the bottom with drive information including the capacity.

Looking at the back of the unit, there’s a USB 3.0 port. Our test model is a 5,400 RPM drive. Overall, the design isn’t flashy, but it features engineering enabling it to be shortened in length by one-third and clearly meets the need for which it’s intended.

Setting up the Toshiba Canvio Connect is hassle-free. In fact, if users don’t want to use the software right away, they can simply start drag-and-dropping once the USB 3.0 plug is installed. (Being bus-powered, that’s the only cable.) Most users will want to double-click the setup icon that will guide them to install the included NTI Backup Now EZ 2010 and PogoPlug software, or users can simply individually install them from their respective folders at any given time. Toshiba has also pre-installed the setup guide and warranty documents as well as the Mac Driver for Apple users.

Pogoplug is included on the Toshiba Connect and provides users with a free lifetime license (typically $29.95). From the start, Pogoplug recognizes the Toshiba Canvio Connect when it’s plugged in to provide users access to that license. From there, users can sign up for their account. Pogoplug includes 10GB of cloud storage free for Toshiba Canvio Connect owners (5GB for non-owners), or users can upgrade to unlimited cloud storage for $4.95/monthly or $49.95/yearly.

Pogoplug’s application is available across a range of devices with support for iOS and Android and is intuitive and simple to use. Once users sign in, they can access their cloud-stored data by category (files, photos, movies, music and favorites). Pogoplug’s most significant settings enable automatic uploads of videos and photos from the Camera Roll, device contact backup and a “Keep Alive” mode that prevents the device from sleeping during uploads. Within the app, users can click on photos, movies, and music to play the files, and they can open up documents within the app. At the bottom of the screen, users have a few options including favoriting the selected file (for categorization) by clicking the star button, as well as printing via a print button. One particularly handy feature in the photos interface allows users to take pictures which then are uploaded to users’ Pogoplug Cloud storage. Overall, the user interface is smooth, and aside from one shutdown where the app had trouble opening a photo file, we had no issues using it.

The Pogoplug app also yields remote access to a computer, assuming the computer is operating. In order to get this function up and running, users just need to run the client on their computer and make sure its set to on. From there, they can select which files/folders to share. From the app, users can quickly access and download all of their files (this can also be done via web browser). This makes sharing huge files super easy as opposed to trying to download hundreds of megabytes or even several gigabytes of files. One issue we ran into is when switching computers, we had to toggle in the software to move from machine to machine. This could be frustrating for users moving from home to a work computer, or in similar scenarios.

NTI Backup Now EZ 2010 enables simple backups of an entire computer or select files and folders to the Canvio Connect or cloud storage. However, there is one oddity which is that users can backup their files only to NTI Cloud or Microsoft SkyDrive cloud storage accounts. So while users will have 10GB of cloud storage from Pogoplug, they won’t be able to use NTI to backup to their Pogoplug cloud storage. It doesn’t make sense that the included software isn’t mated out of the box to work together, but Toshiba says NTI is adding this feature down the road. Otherwise, the software has been designed with simplicity in mind, and for users from beginners to advanced, it will be easy to manage the integrity of their files and folders.

Starting out, users arrive at a screen that enables them to check off the three backup options (cloud, file and folder, and complete system backup). For each option, users can click to modify which allows them to select broad files types. For example, users can choose multi-media and within that category music, video and pictures. Clicking modify again on that new screen allows users to backup their files by picking or adding extensions (ex.  .mp3 or .docx). There’s also an advanced tab on the left side of the screen enabling users to have a Windows Explorer type view of their entire system, and from there users can choose what to back up.

Now, users can choose if they want to encrypt their backups with up to 256-bit encryption using passwords. Users can work on scheduling backups by modifying the frequency by selecting the backup interval, time, and which particular day of the week or month to backup. Users can schedule backups as often as hourly or as infrequently as monthly. There’s also an option that allows users to select how much compute performance they want to dedicate to the backup. Now that backups are setup, users can check status details which displays graphics on a calendar laying out when backups are scheduled and how capacity is required and used.

Using our Consumer Testing Platform, we measured transfer speeds from the Toshiba Canvio Connect utilizing its USB 3.0 interface with IOMeter. Sequential read and write speeds measured 101.5MB/s and 101.2MB/s respectively, while random large-block transfers measured 47.7MB/s read and 37.9MB/s write. For bulk storage and the backups at which the Canvio Connect is targeted, these figures are respectable.

Comparing the Canvio Connect to similarly-marketed products, the Buffalo MiniStation posted 115.1MB/s on both the sequential read and write tests and measured 46.3MB/s for reads and 49.1MB/s for writes on the large-block transfers. Meanwhile, the G-Technology G-DRIVE mini tested with sequential read and write speeds at 127.6MB/s and 121.2MB/s respectively, and random large-block transfers measured 55.1MB/s read and 55.9MB/s write.

Toshiba’s Canvio Connect portable storage device includes a USB 3.0 interface and an updated capacity that ranges up to 2TB. Adding to its portability is a design enhancement that reduces the size by a third by integrating the USB connector into the drive. On top of that, Canvio Connect’s included NTI software provides backup tools to perform backups of specified files and folders at a frequency convenient and effective for users. There is also remote access to digital content and files stored on computers via the PogoPlug app so that users can take the media and files anywhere they go at home or on the road away from work.

A simple look at big box retailers and e-commerce sites quickly reveals that the market is fairly saturated with portable storage drives, but what helps the Toshiba Canvio Connect to stand out is the reliability of Toshiba’s brand and the included software which enables users to obtain a Pogoplug license and 10GB of cloud storage for free as well as remote access. Users also get backups to the cloud, albeit not to the Pogoplug cloud at this time, or to the Canvio Connect directly. The software adds a lot of value to a drive that starts at just around $100, offering features that are similar to enterprise software features for backup, recovery, and remote access, though scaled down for ease of use.

We found the drive to be decently fast, especially given the price-point and included software. That’s not to say that the Canvio Connect is perfect. Its performance was noticeably lower than both the comparables in our sequential and large-block random tests. Those drives are however a bit more expensive without offering the software suite Canvio Connect does. Another issue we found was that when users switch computers, they have to toggle in the client to move from machine to machine making it a bit frustrating for users who access more than one computer. Overall though, the drive has done well to present a solid design that is compact and customizable, and it offers a lot of value given its price range.

The Toshiba Canvio Connect will appeal to loads of home users as a portable hard drive that enables users to backup important files and folders and remotely access an entire computer’s content anywhere without breaking the bank.