The Toshiba Exceria is the company’s most recent foray into the UHS-I SD card market. The new line of SD cards is designed for professional DSLR photographers, videographers, and high-res content creators looking for an economical alternative. The Exceria SD cards offer UHS Speed Class 3 (U3) support for 4K video recording and playback. In addition, the Toshiba cards are classified as x-ray proof.

The Toshiba Exceria is the company’s most recent foray into the UHS-I SD card market. The new line of SD cards is designed for professional DSLR photographers, videographers, and high-res content creators looking for an economical alternative. The Exceria SD cards offer UHS Speed Class 3 (U3) support for 4K video recording and playback. In addition, the Toshiba cards are classified as x-ray proof. 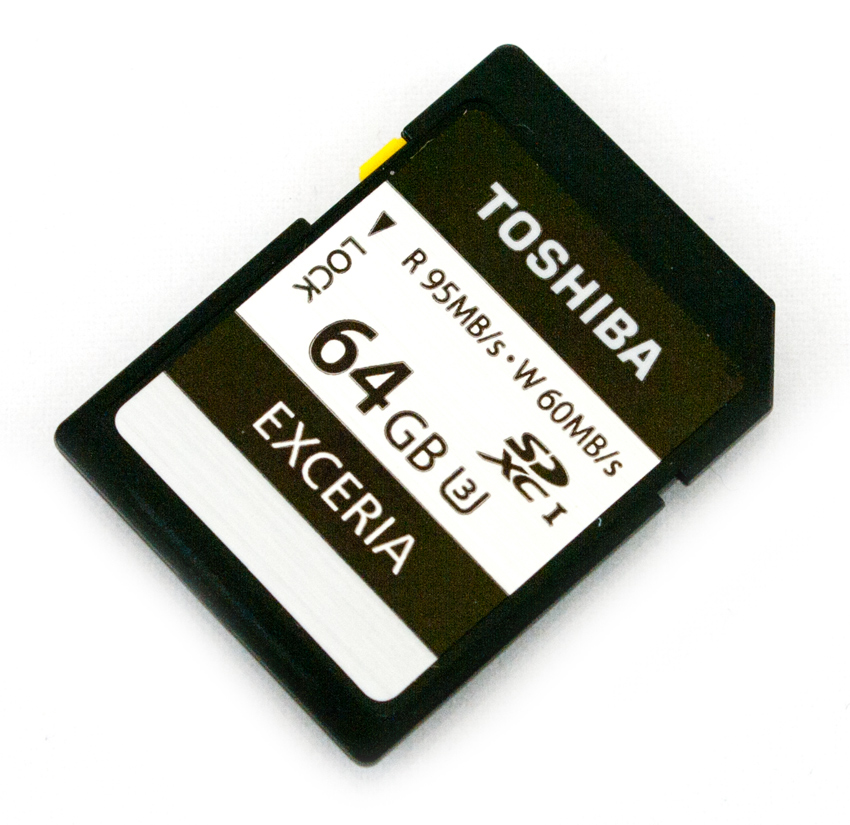 Toshiba states that the Exceria cards offer enough performance to capture fast-action photos, which is in line with their target demographic and specifications. That being said, Toshiba is competing against the powerhouses that are Samsung and SanDisk, both of which have been dominating the SD market over the past few years in both performance and pricing, so it will be interesting to see where the Exceria line of UHS-1 SD cards rank among these titans and where it fits in the saturated market.

Though similar to the look of the Exceria Pro version, it sports a different design compared to the other Exceria lines (Type 1, Type 2, and Type HD) with its exterior and branding. The Toshiba UHS-1 has a plethora of information on the front side, including its branding, read and write transfer speeds, class, capacity, lock indicator and Toshiba logo, which is vividly located at the top. 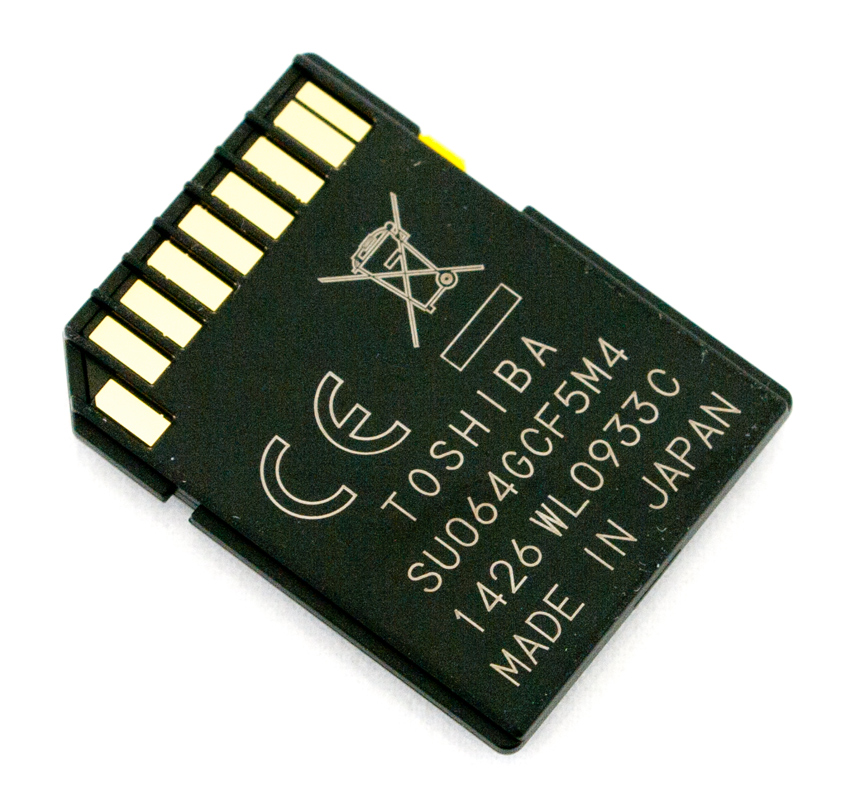 On the side of the SD card, you will see a yellow sliding lock mechanism to further protect data from being over-written. When the Exceria is flipped over, you will see the 9 connector pins as well as the other information such as the model number. It also indicates that the cards were manufactured Japan.

In this review, we will include the following comparables with their respective advertised performance numbers:

Using our HP Z620 Workstation Testing Platform running Windows 8.1, we measured sequential transfer speeds from the Toshiba Exceria 64GB card at 85.89MB/s read and 58.63MB/s for write, both of which fell just short of what is quoted by Toshiba. As for the comparables, the Samsung Plus Series card posted 70.0MB/s read, while write activity hit 19.82MB/s. In addition, the 64GB Kingston SDXC hit sequential read and write speeds with 89.6MB/s and 59MB/s respectively, while the Lexar Professional 600x SDXC recorded 81.3MB/s read and 44.3MB/s write. The popular Samsung 64GB Pro SDHC boasted sequential read speeds of 87.4MB/s, while write activity hit 75.8MB/s.

When switching to random large-block transfers, the Toshiba SD card’s write performance suffered greatly, posting 3.20MB/s write; however, it scored a blistering read speed of 84.2MB/s. As far as the comparables go, the Samsung Plus Series 32GB the Plus series measured 66.1MB/s read and 19.7MB/s write while the 64GB Kingston SDXC recorded 86.8MB/s read and 11.2MB/s write. The Lexar Professional chimed in with an activity of 79.6MB/s read and 10.8MB/s write and the Samsung Pro measured 81.6MB/s read 18.1MB/s write.

The new Toshiba Exceria SD cards are designed for professional DSLR photographers, videographers, and high-res content creators as well as for high-end mobile devices that demand performance from their attached storage. The card also feels reasonably rugged when handled despite its small size and is also X-ray proof and has a write protection mechanism, which is enabled by simply sliding a button on the side of the card. The Exceria SD line comes in three capacities; 16GB, 32GB, and 64GB.

As far as performance goes, the Exceria SD cards delivered on all cylinders and thus fared very well amongst its competition. In sequential read and write performance (2MB transfers), the Exceria boasted an impressive 85.89MB/s and 58.63MB/s respectively, which are comparable to the popular Samsung Pro SDHC (87.4MB/s read and 75.8MB/s write). When switching the random transfers, the Toshiba card took a bit of a hit in the write column, reaching only 3.20MB/s; however, it recorded a very fast read score of 84.2MB/s, which is actually one of the fastest read speeds we have tested for SD cards to date.

Though the Toshiba Exceria SD cards did compete very well with top-in-class cards like the Samsung Pro in the performance column, it is a bit more expensive (e.g. $40 for the Samsung Pro’s 32GB compared to $50 for the Toshiba Exceria 32GB model) and has half the warranty coverage. These SD cards do offer great overall performance though and can compete with the best of them. With downward pricing pressure, they're definitely worth considering.